COLUMBIA, Mo., May 5, 2014 — It was a grand weekend, getting to see my alma mater Vanderbilt University’s baseball Commodores sweep the University of Missouri Tigers in a 3-game series here.  And we also enjoyed strolling the beautiful MU campus, hanging downtown at such Mizzou favorites as Booches Billiard Hall (“oldest in Missouri,” with great hamburgers) and Shakespeare’s Pizza, and a Saturday morning hike on the KATY Trail along the Missouri River outside the nearby town of Rocheport.

Traveling with Carla Offenburger and me were her sister Chris Woods and husband Tony Woods, of Des Moines.  We hit perfect spring weather.

Vanderbilt has a very young team this season, but got off to a 16-2 start this season, which brought them a national ranking in the top five.  The Commodores wobbled some in March and early April, but have been hot again, winning their last seven games and now standing at 36-12 overall and 14-10 in the very tough Southeastern Conference.  They are currently ranked from No. 10 to No. 18, depending on which poll you check.  At Mizzou, Vandy prevailed 8-3, 5-1 and 3-1.  For the host Tigers, the three losses dropped them to 20-27 overall and 6-18 in the SEC.

Vandy Coach Tim Corbin, 52 years old, has developed one of the nation’s best collegiate baseball programs in his 12 years as our skipper.  Saturday’s victory at Mizzou was his 500th as the Commodores’ head coach.  That means his teams have averaged winning more than 41 games per season.  They’ve won three SEC championships under him, and the 2011 team became the school’s first to qualify for the College World Series in Omaha.

We Offenburgers follow the team closely, via a Vanderbilt “all-access” audio and video package on the Internet, which we purchase for about $10 per month.  And we’ve traveled to see them play about one series per season, usually attending baseball games on the campus in Nashville.

You learn quickly that college baseball is a different experience from football and basketball.  The crowds are small, usually a few thousand, and thus the traffic and parking are easy.  Even better, with the game of baseball’s unhurried pace, fans of both teams take time to visit.  And so do the players and coaches right after the games, mixing with the crowd before they board their buses, often thanking you for attending.

Of course, any time I get to be around other Vanderbilt fans, I treasure it.  Having lived so far from Vanderbilt, I’m used to being the only Commodore fan in any group, unless Carla is with me. It’s a little better now, after Missouri joined the SEC three years ago.  That means the Vanderbilt teams in all sports now make trips to play the Tigers here in Columbia, and that’s only a five-hour drive for us.

You can get more of the story of our latest Vandy-Mizzou weekend in the 23 photos and captions below here. 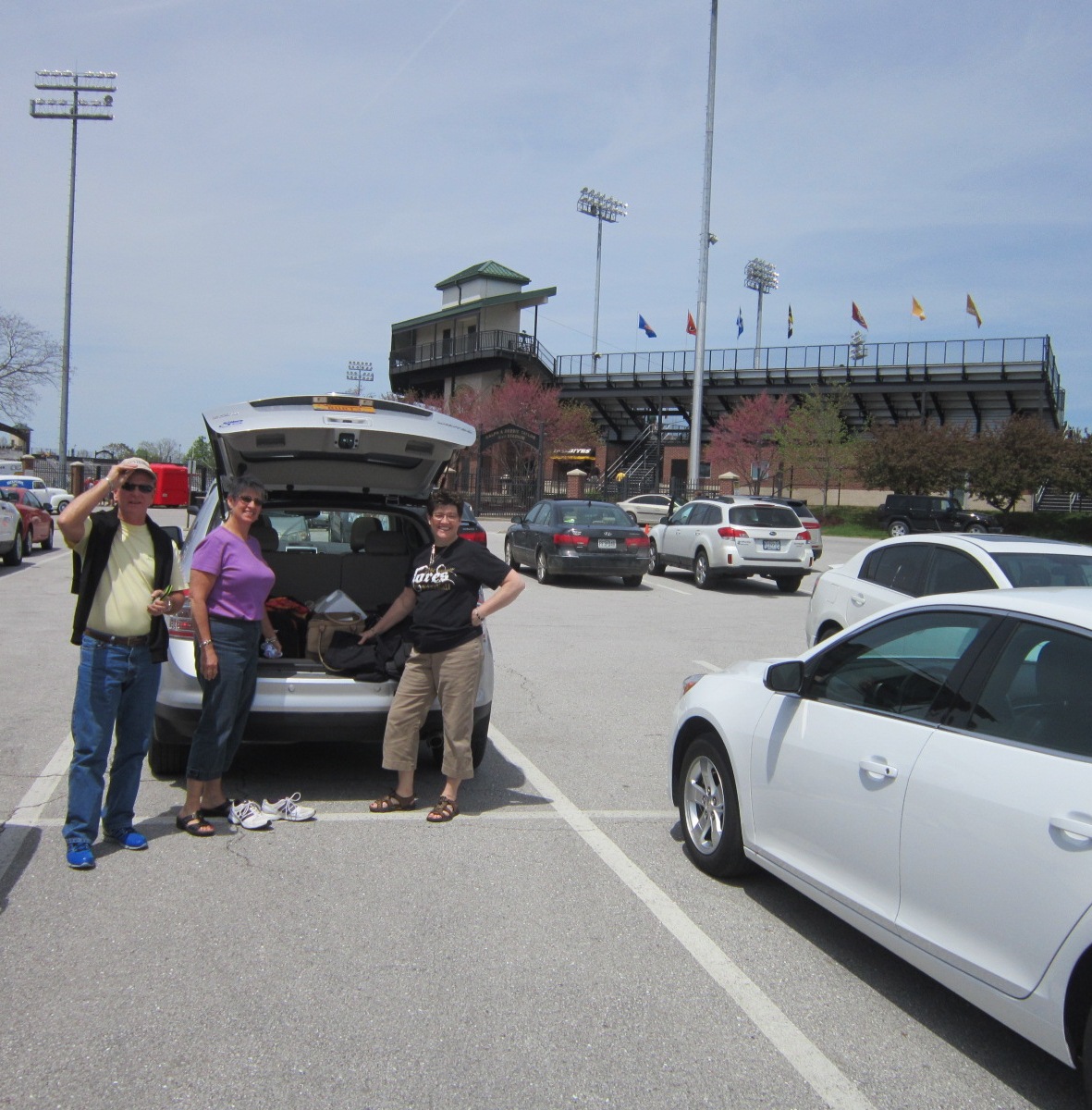 There was free, close-up parking outside Taylor Stadium at the University of Missouri. 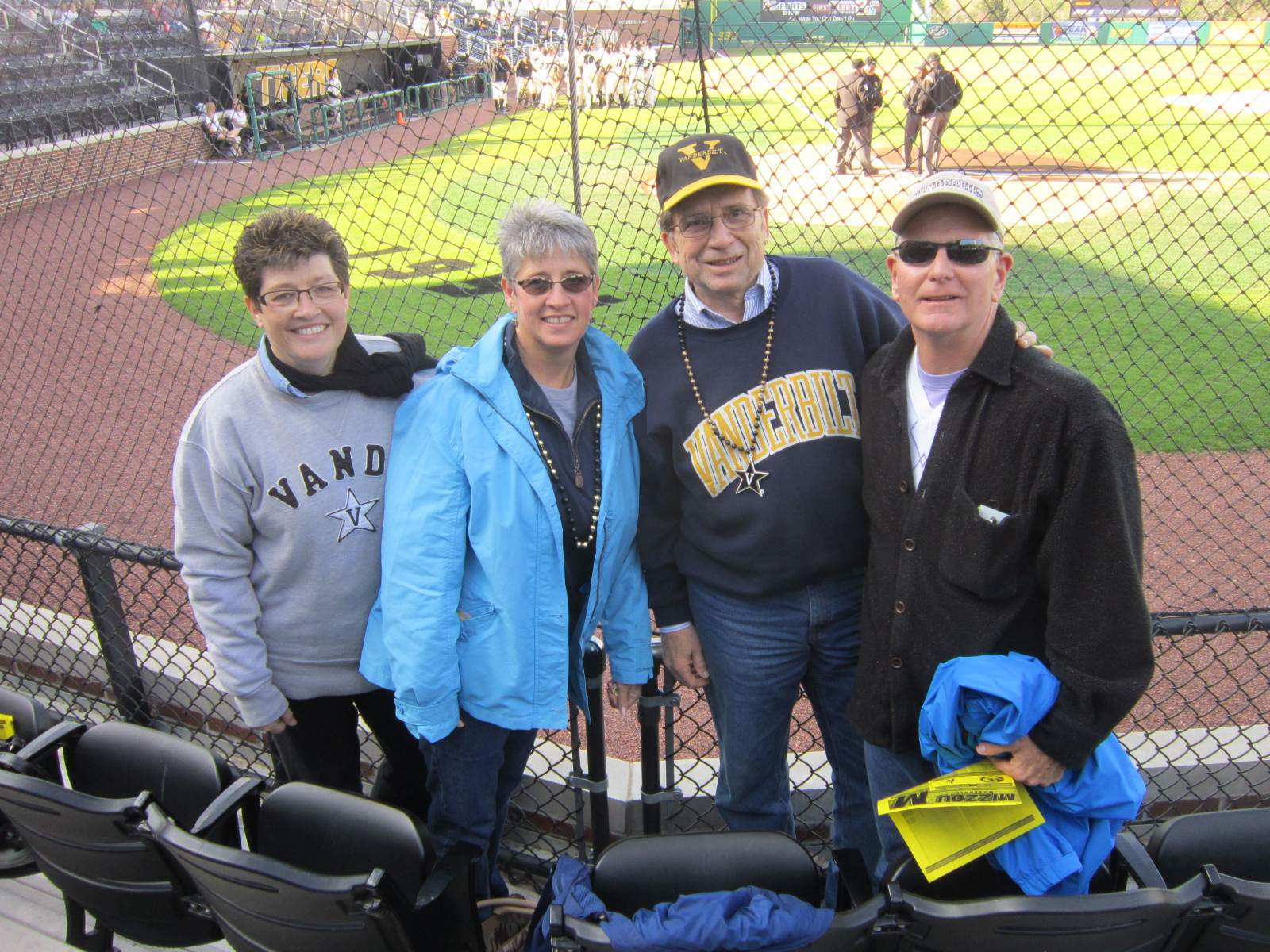 Get this — we bought reserved-seat tickets for $5 each per game, and sat in first- or second-row seats about 40 feet from home plate!  Taylor Stadium holds about 3,000. Left to right here are Carla Offenburger, Chris Woods, Chuck Offenburger and Tony Woods. 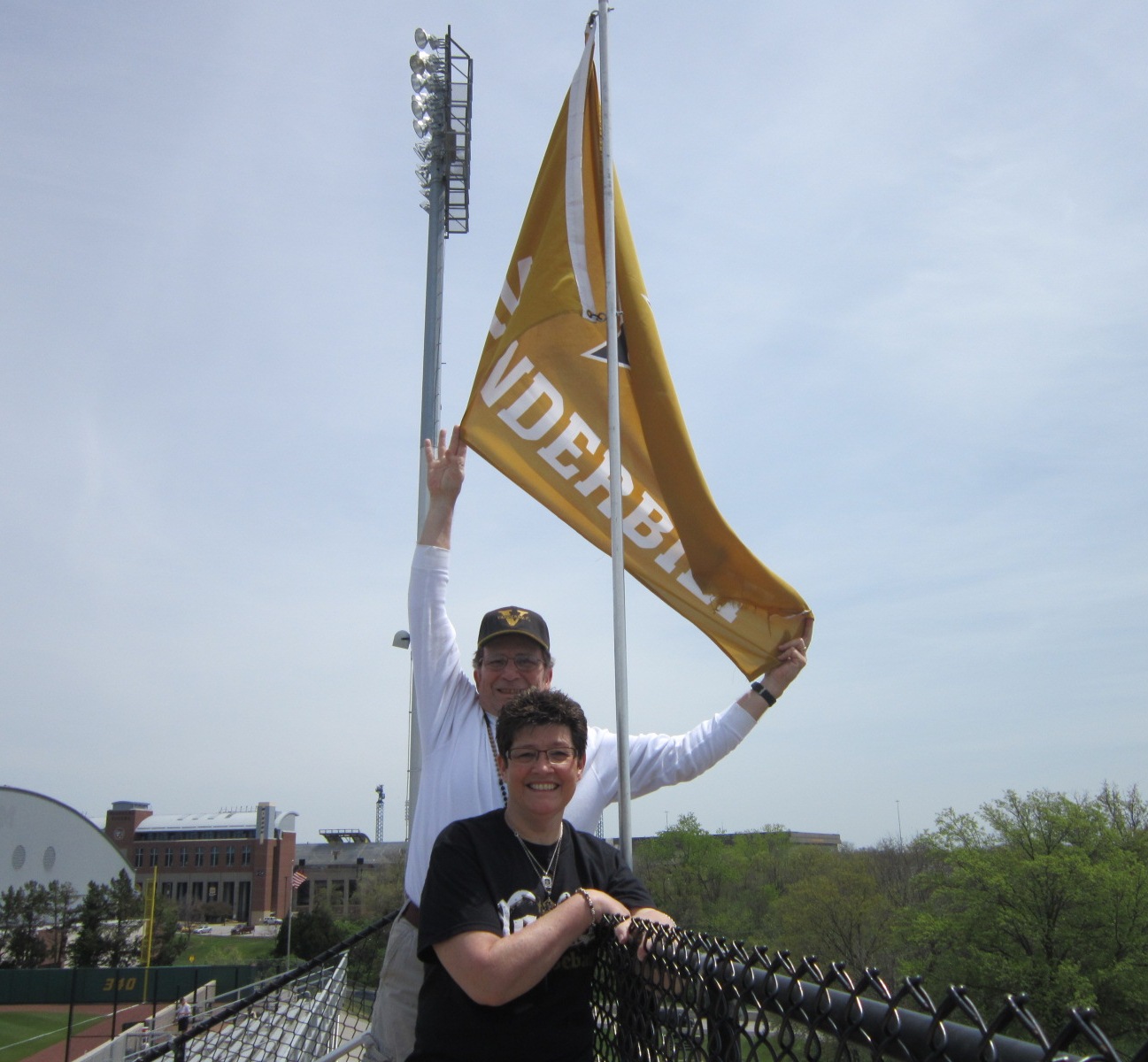 Vandy fans Chuck and Carla Offenburger couldn’t resist posing with the Vanderbilt flag fluttering atop the grandstand. All the SEC schools have flags displayed there. 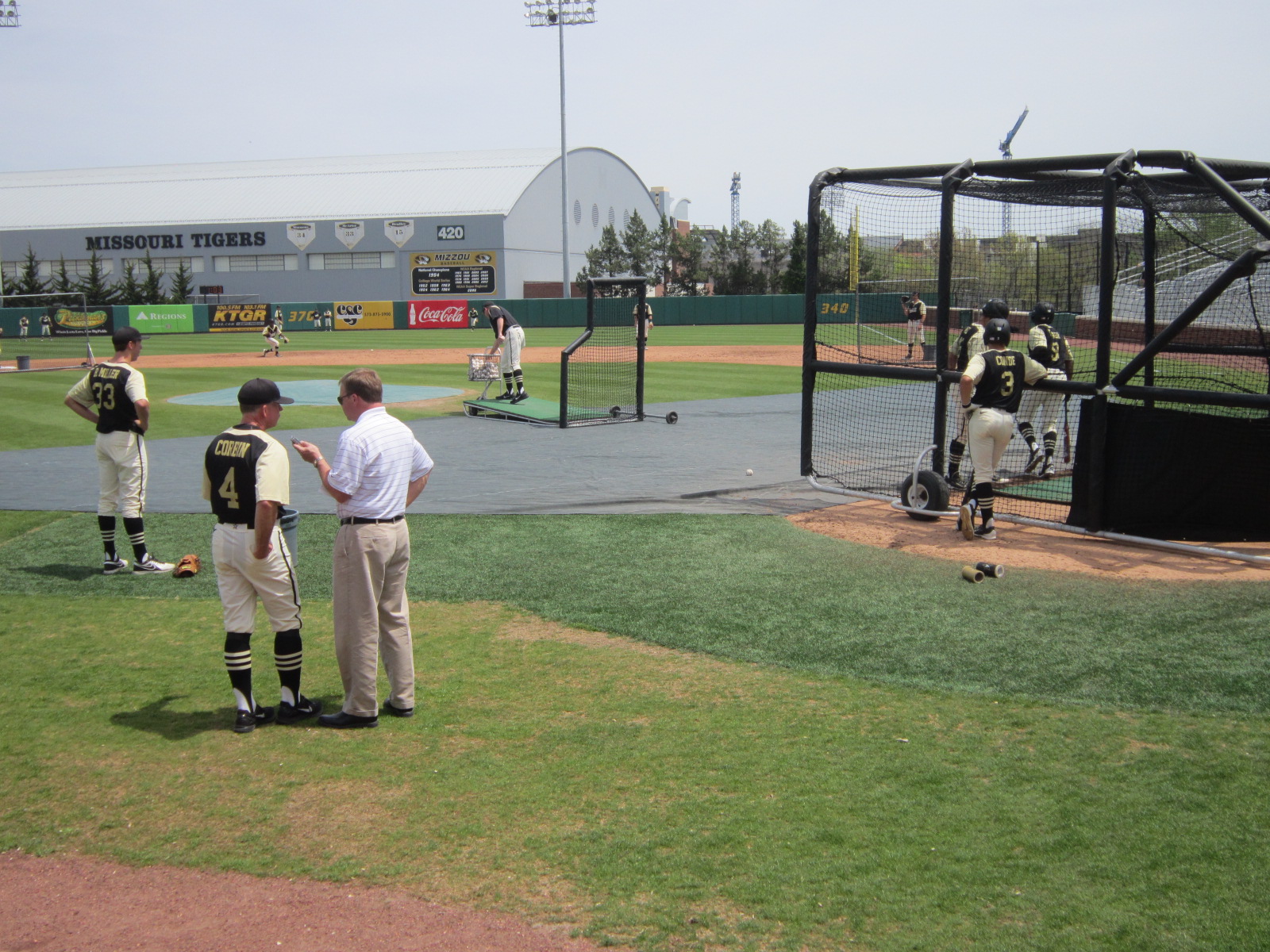 Vanderbilt head coach Tim Corbin (4) is shown here being interviewed during pre-game batting practice by the “Voice of the Commodores” Joe Fisher, who was broadcasting the games from Columbia, Mo., on radio back in Vandy’s home city of Nashville and on the Internet.  Commodore fans living as far away as Singapore are regular listeners to the team’s game. 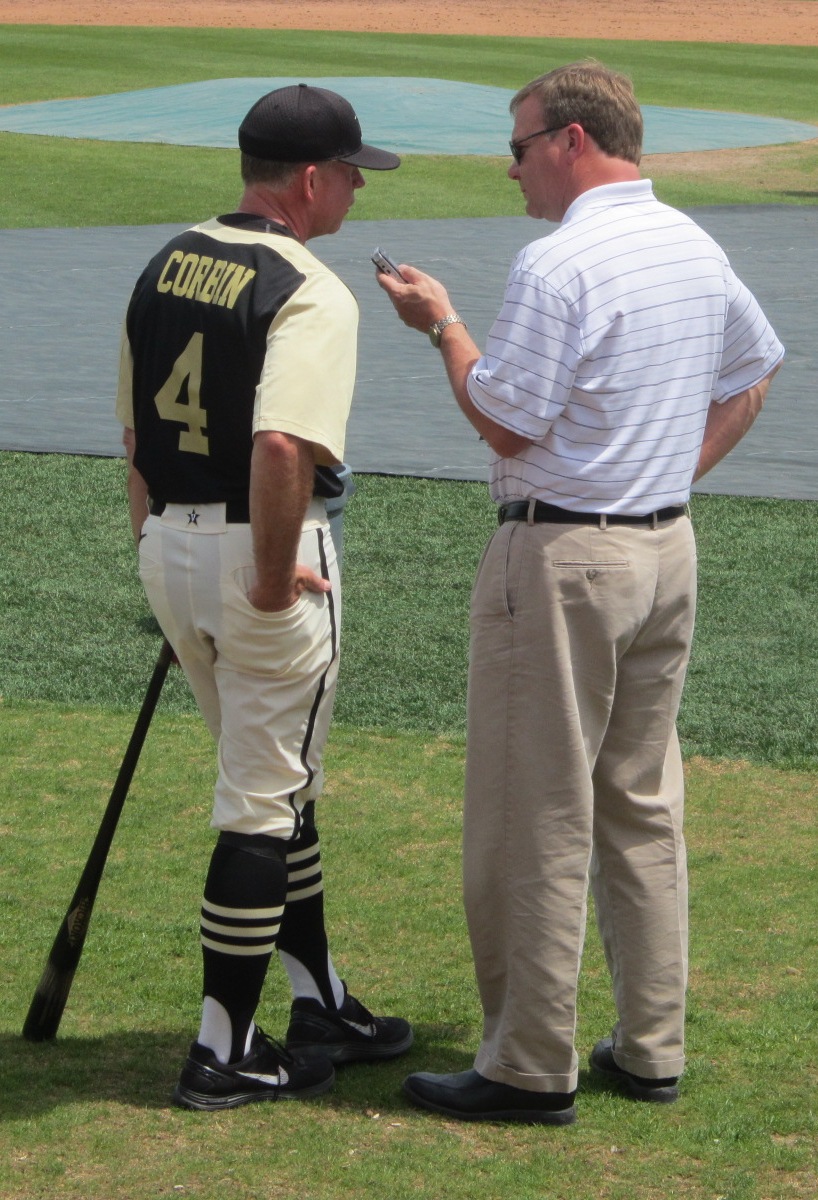 A close-up of that radio interview of Coach Tim Corbin by broadcaster Joe Fisher. 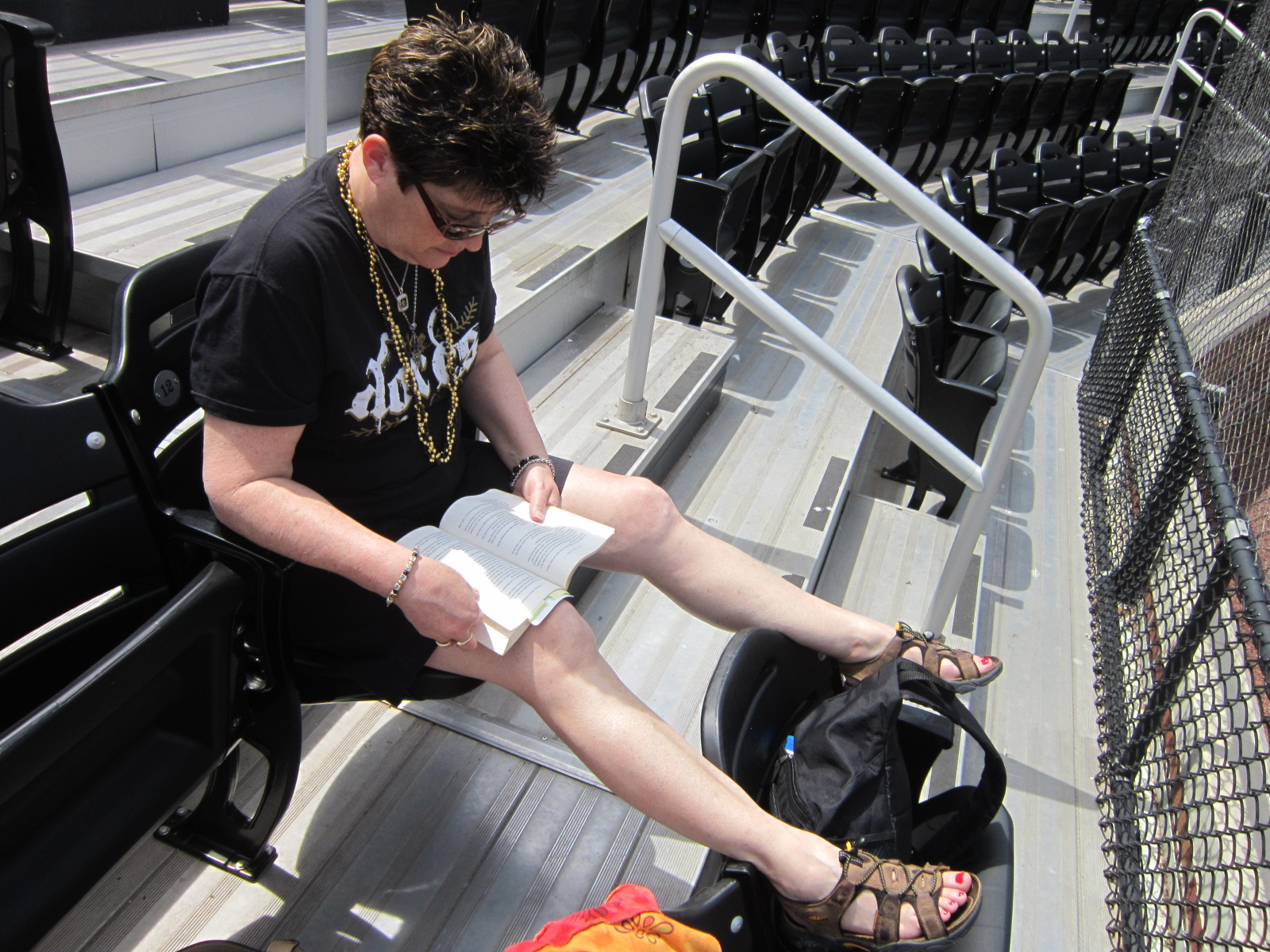 Carla Offenburger wasn’t wild about watching pre-game batting practice, so she basked in the sunshine and read a novel, “The Bingo Queens of Paradise,” by June Park.  Regular readers of Offenburger.com know what a voracious reader she is. 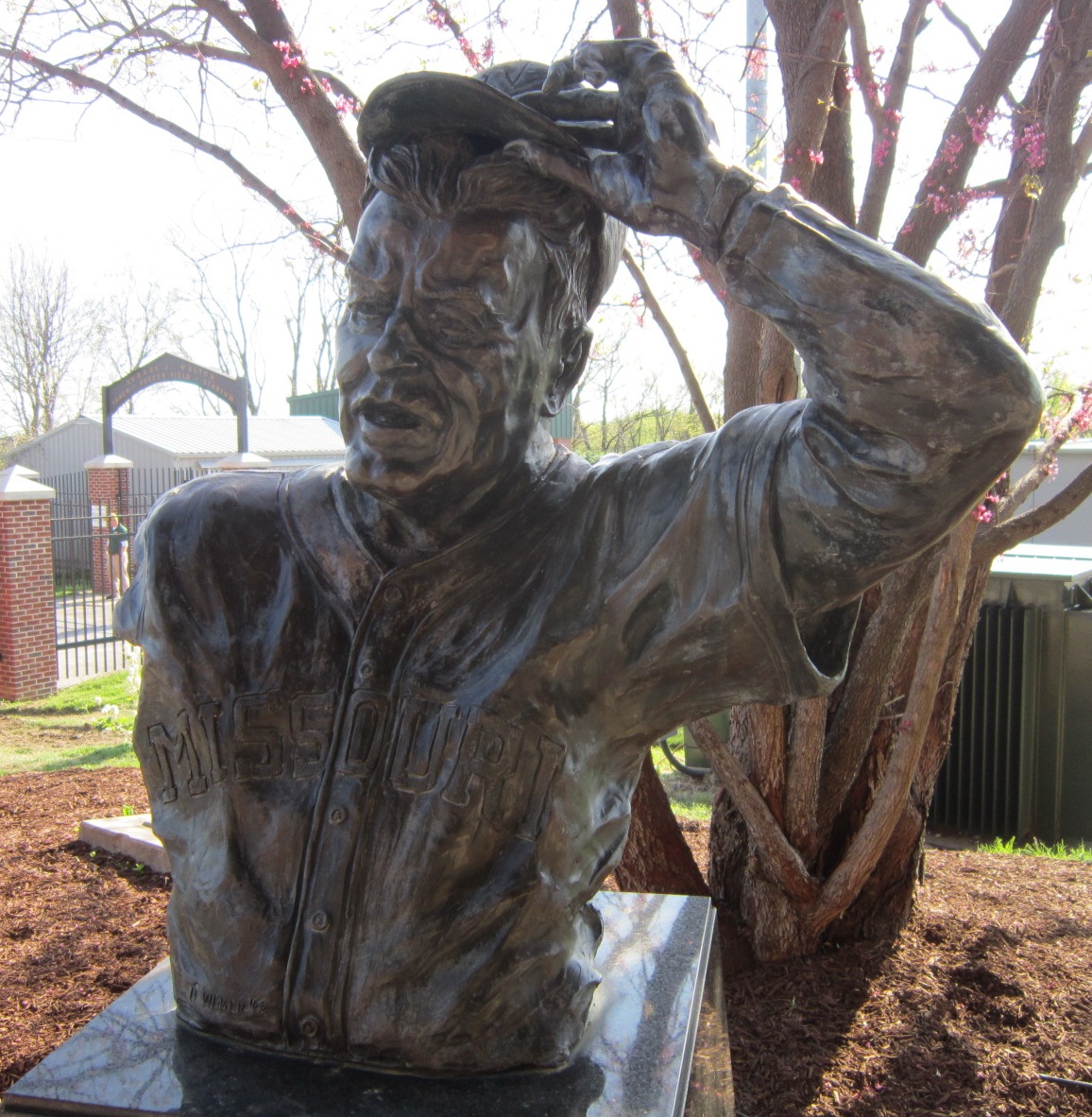 In the tunnel beneath the grandstand at Taylor Stadium is this impressive bust of legendary Missouri baseball coach John “Hi” Simmons, who directed the Tigers from 1937 to 1973.  He led Mizzou to 11 conference titles in the Big Seven and Big Eight Conferences and his team won the 1954 College World Series.  He is also recognized by having the baseball field named in his honor. It is formally “Simmons Field at Taylor Stadium.” 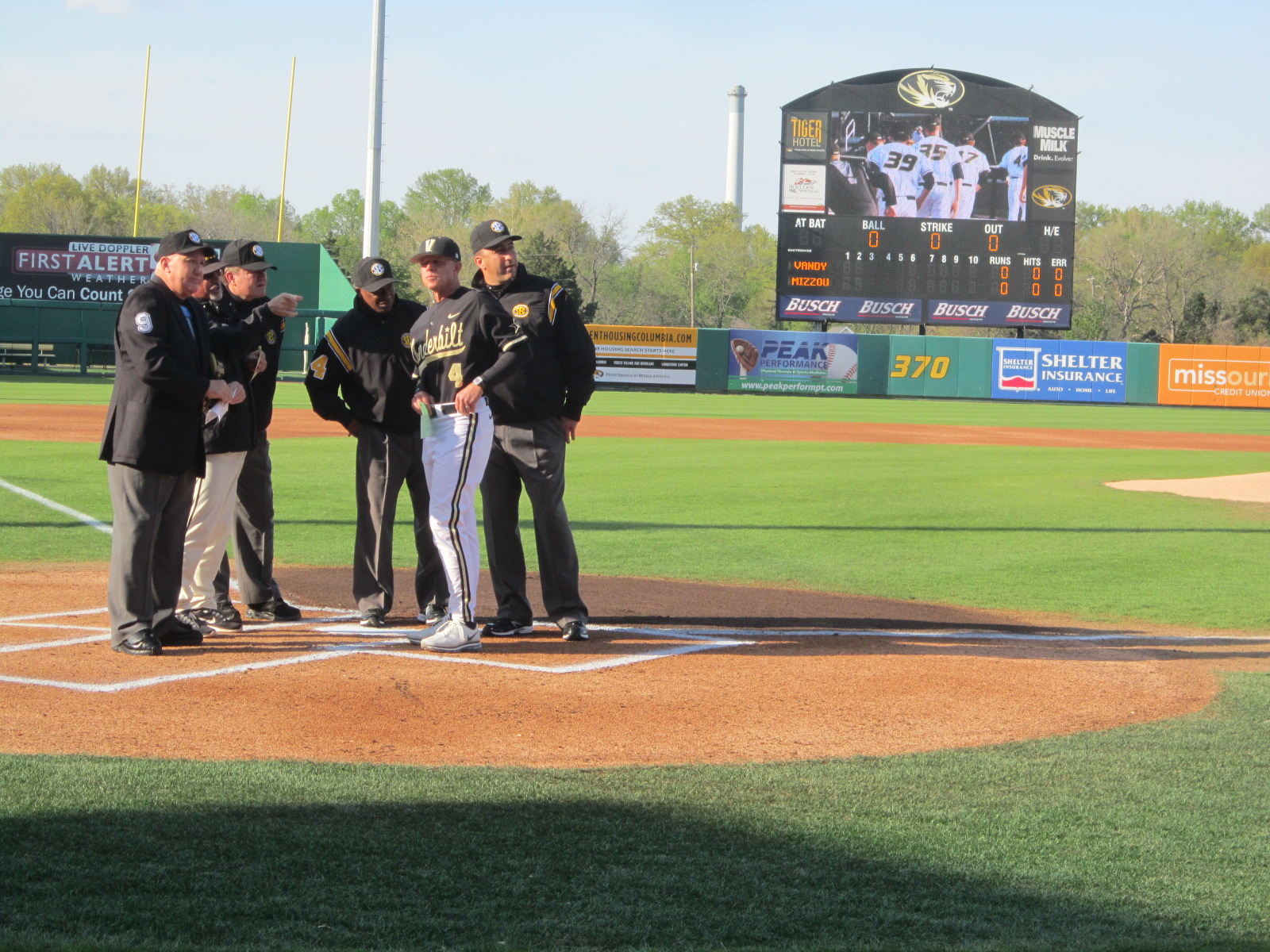 Here the umpires meet for the pre-game ground rules explanation, with Missouri Coach Tim Jamieson at the left and Vanderbilt Coach Tim Corbin at the right.  Taylor Stadium sits on a hilltop on the MU campus, adjacent to the track and the softball stadium.  The football stadium Faurot Field is across the street east. 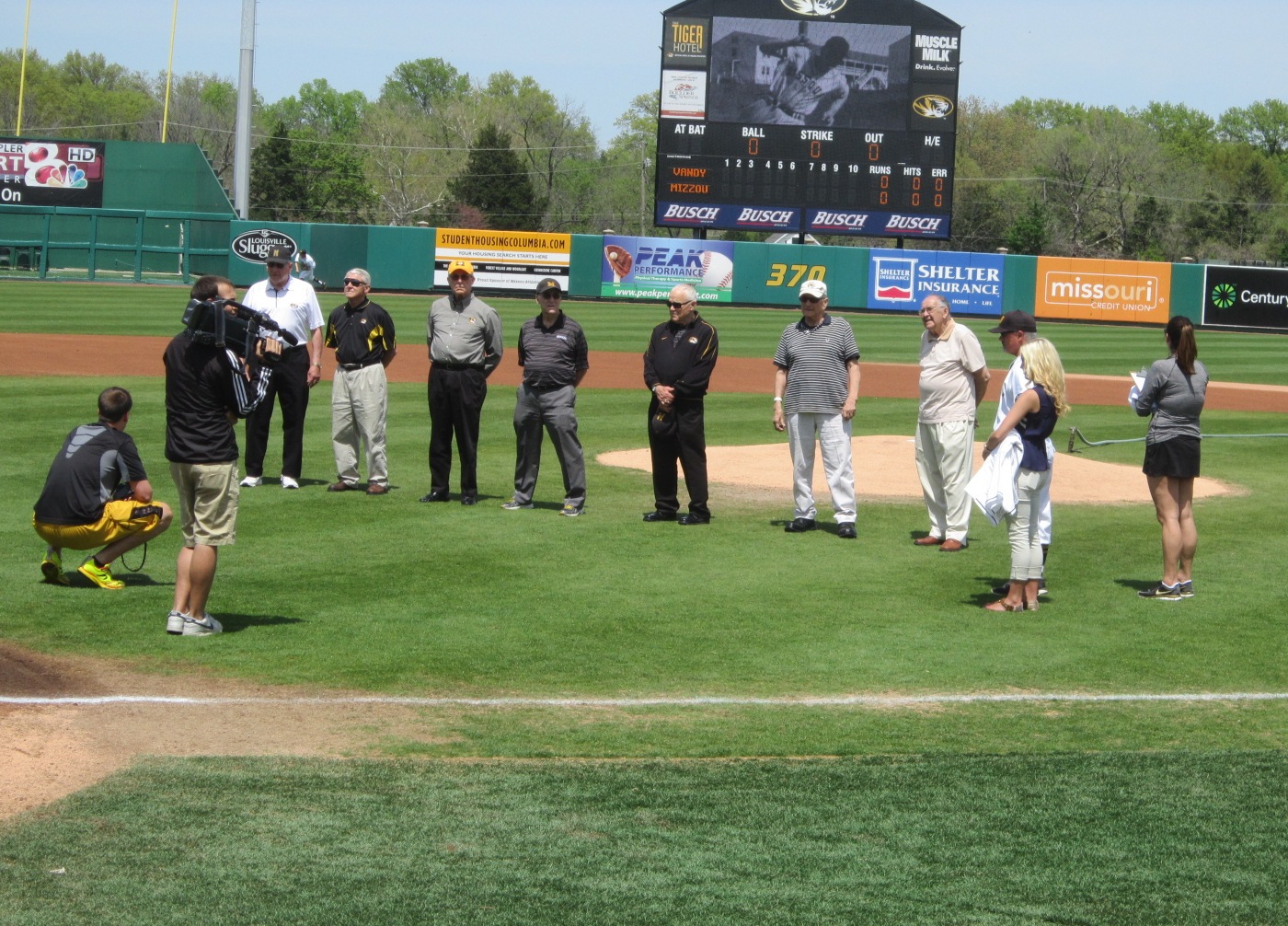 Before Saturday afternoon’s game, the University of Missouri honored the 60th anniversary of its 1954 team that won the national championship in the College World Series.  Seven of the team members, now all in their 80s, returned for the ceremony. This year’s Tigers wore replicas of the 1954 uniforms, complete with baggy pants, stirrup socks and bloused sleeves. 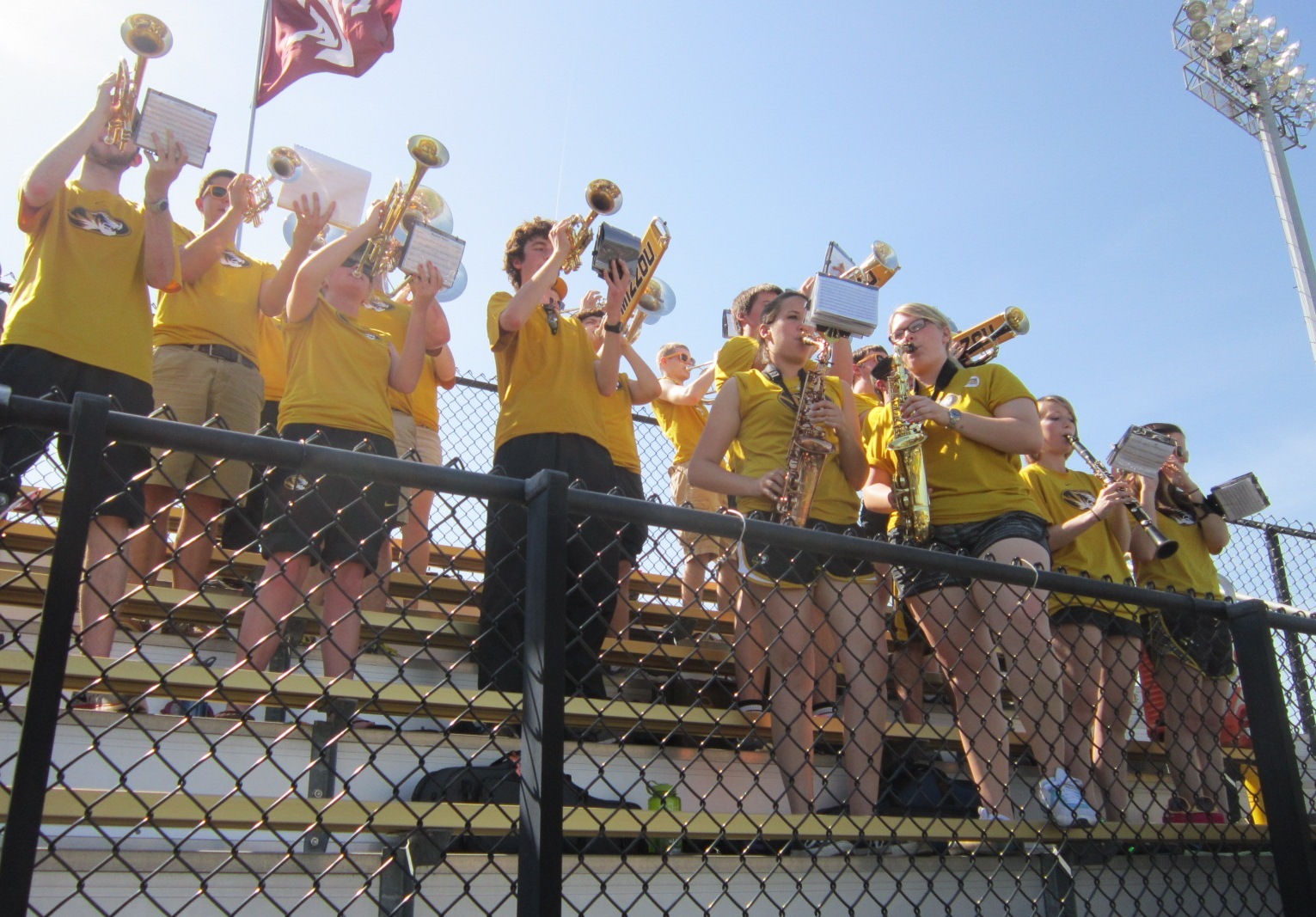 It was especially fun at Saturday’s game to have the Missouri pep band in the stadium, playing between innings. 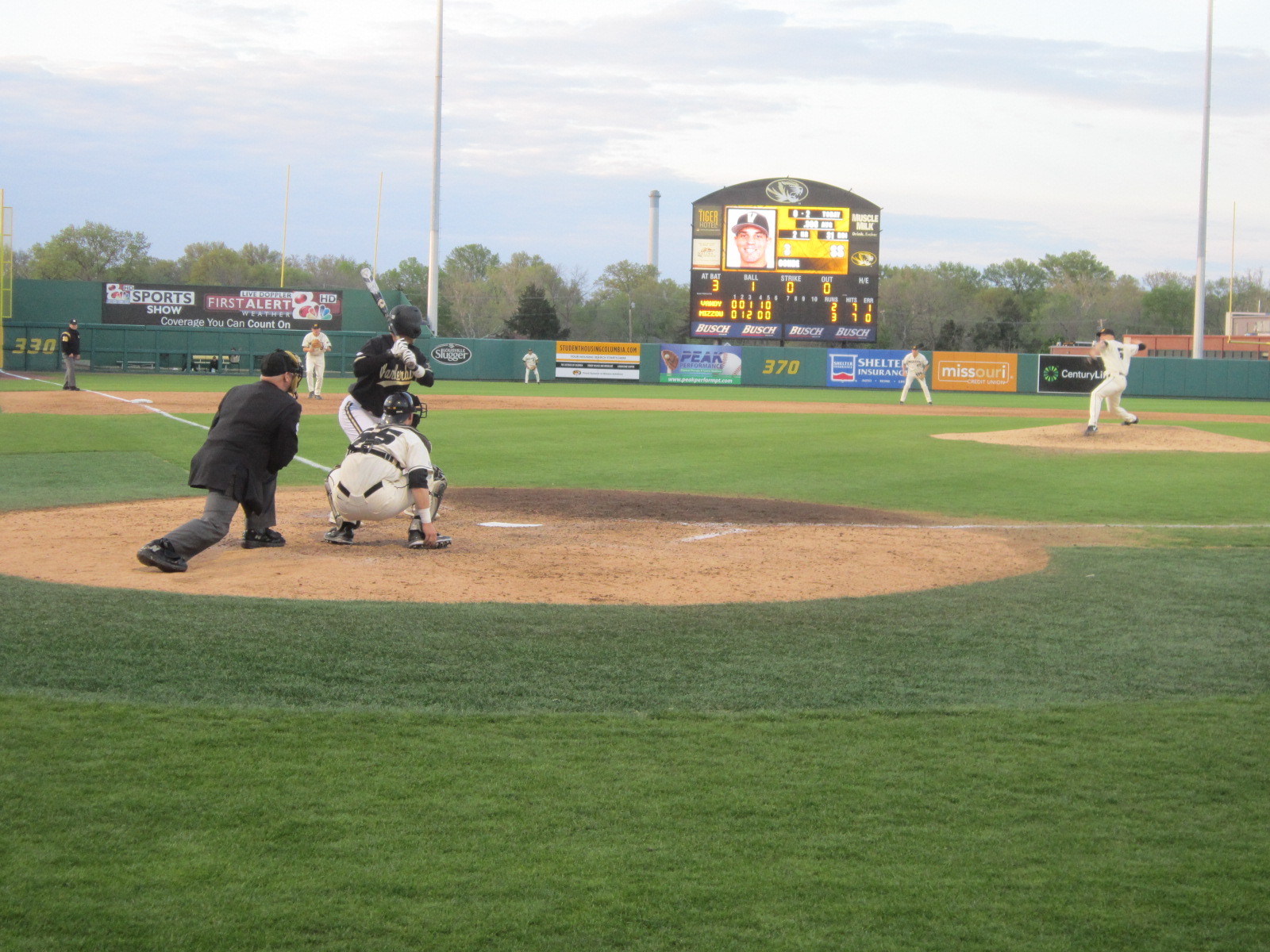 A view of the action early in Friday evening’s game, with Vanderbilt’s Vince Conde up to bat. 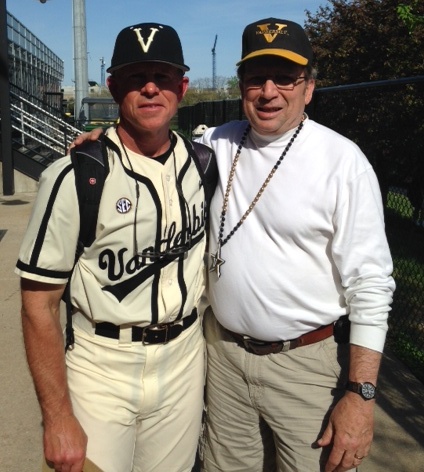 After Saturday’s game, which produced Tim Corbin’s 500th victory as the Vanderbilt head coach, he was good enough to pose for this photo with Chuck Offenburger, a 1969 Vandy grad and alumnus of the baseball program when it was woeful. 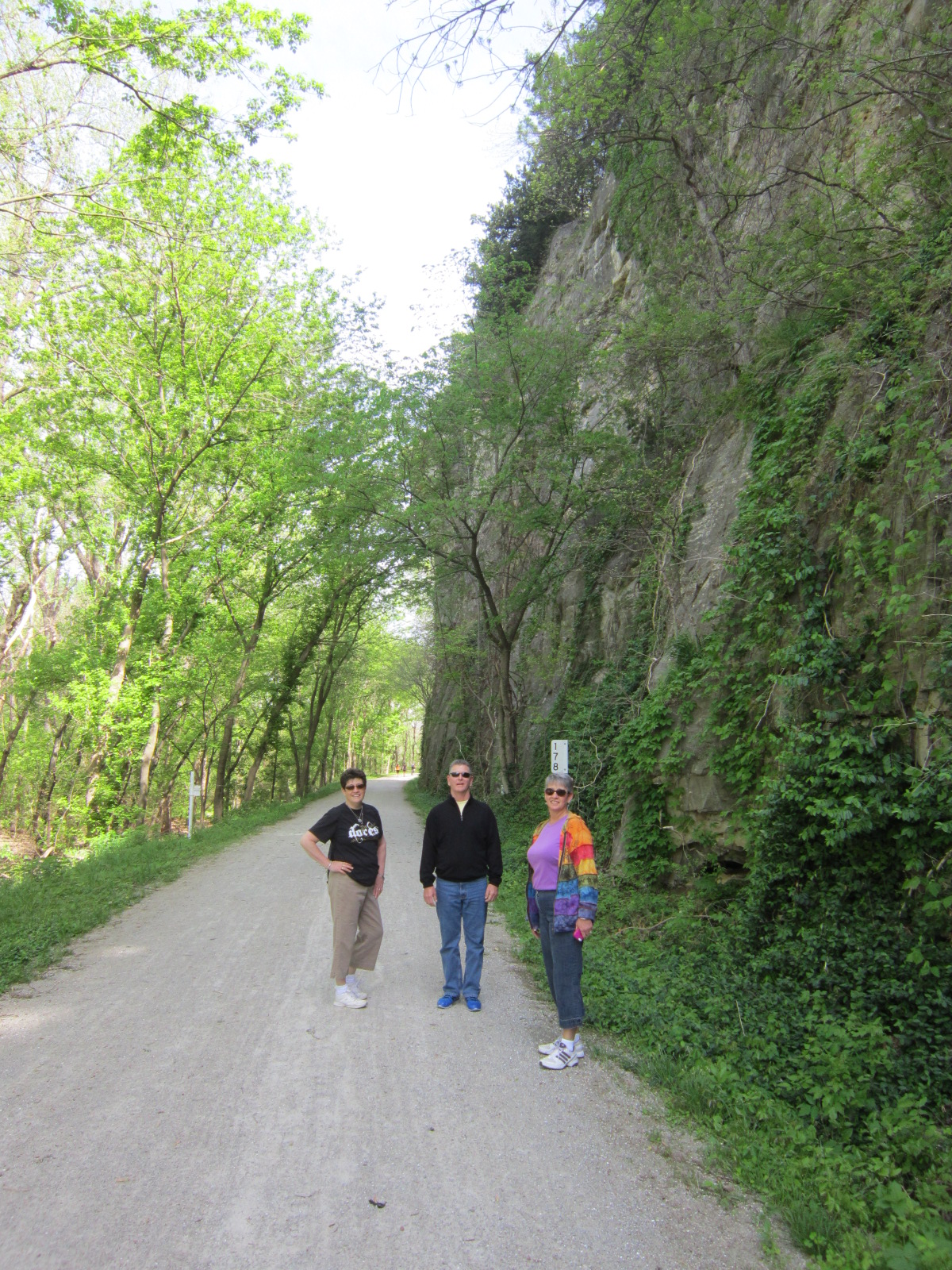 Saturday morning, we drove 12 miles west of Columbia to the town of Rocheport, to take a 4-mile hike on the spectacular 240-mile-long KATY Trail, which crosses nearly the whole state of Missouri on the former right-of-way of the old Missouri-Kansas-Texas Railroad, generally right on the bank of the Missouri River.  There are several places where you are walking or riding your bicycle below 250-foot-high stone outcroppings like this. The trail has a wide, well-packed, crushed rock surface. 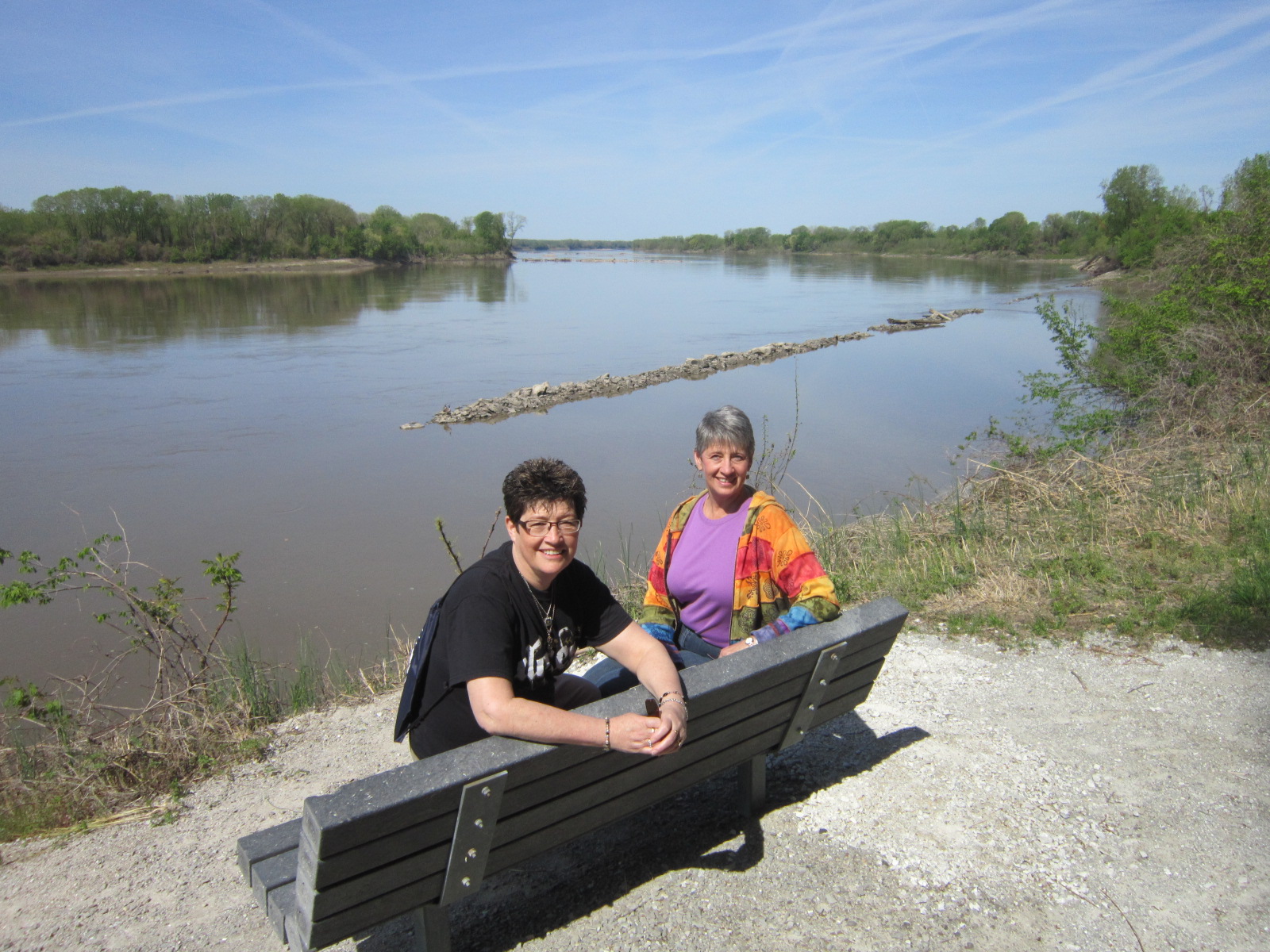 Here are sisters Carla Offenburger and Chris Woods taking a break on the KATY Trail with the Missouri River right behind them. 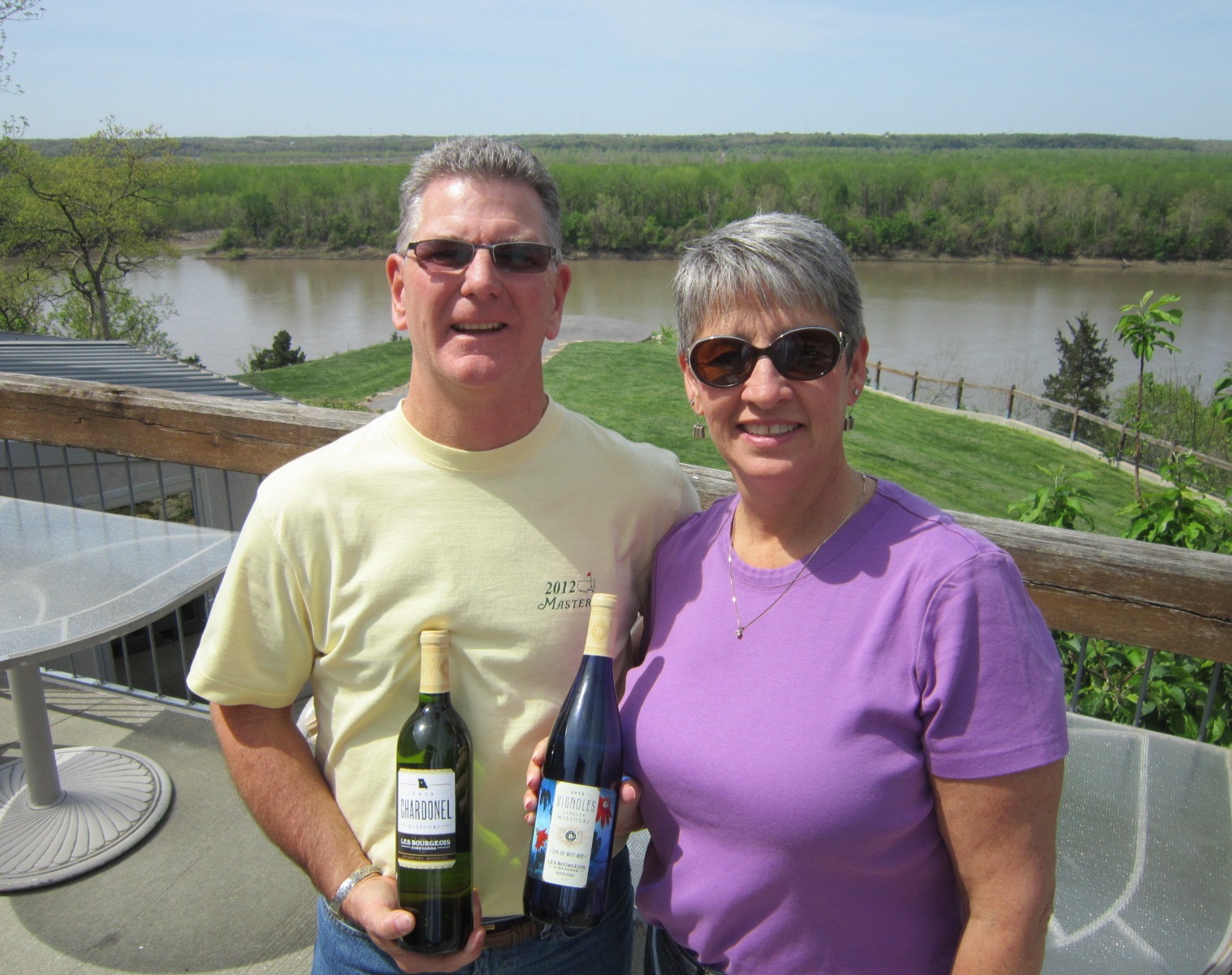 On a blufftop above the KATY Trail and Rocheport, Tony and Chris Woods stopped in at the Les Bourgeois Winery and restaurant and bought these bottles of the wine made there.  You can see the Missouri River far below them. 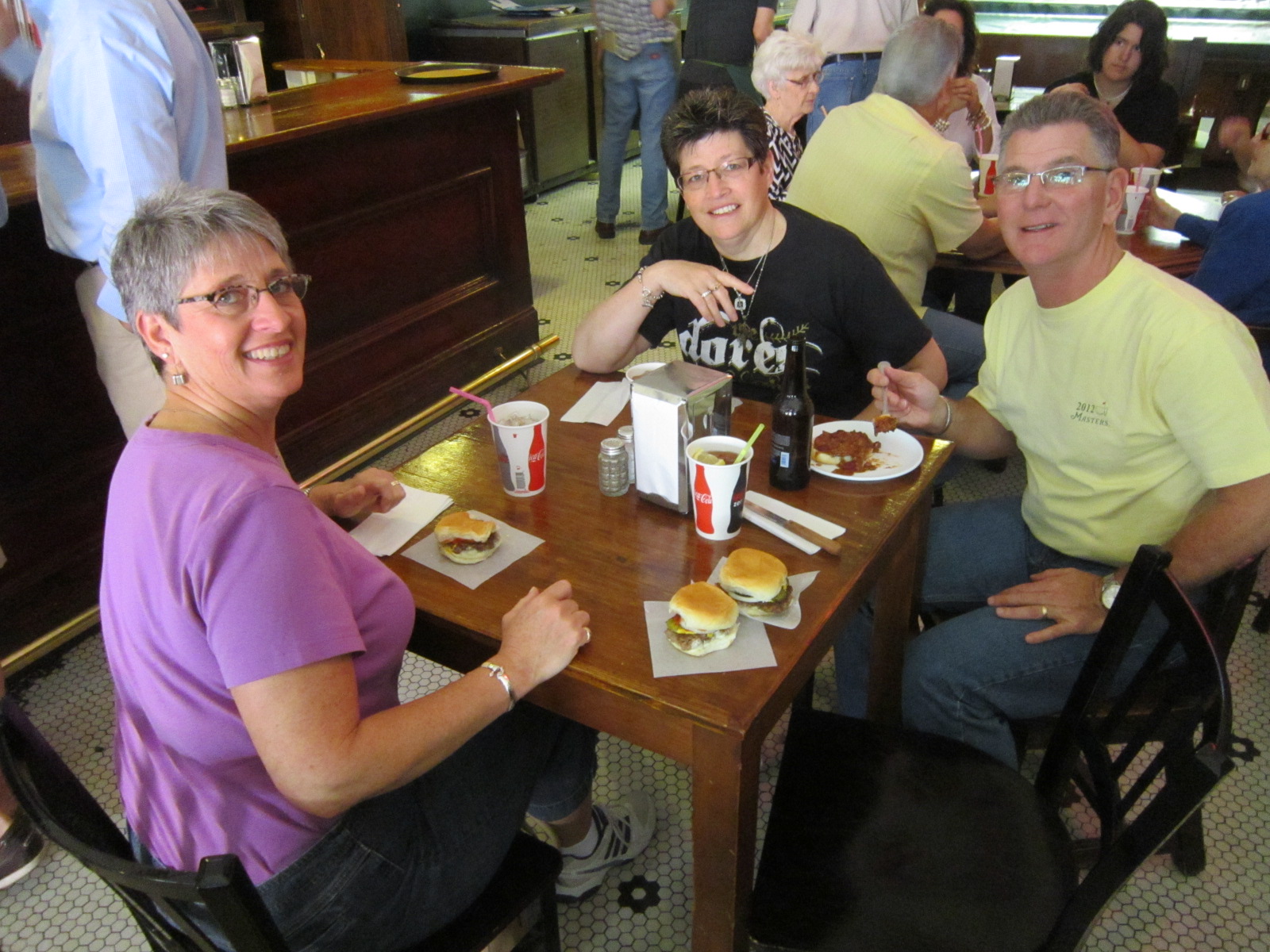 Lunch Saturday was at the legendary Booches Billiard Hall,  “since 1884” in downtown Columbia that is famous for its hamburgers and cheeseburgers, which are served on waxed paper, not plates.  The sandwiches are favorites of Mizzou fans, who pack the place on the days and evenings of big games.  Here are Chris Woods, Carla Offenburger and Tony Woods. 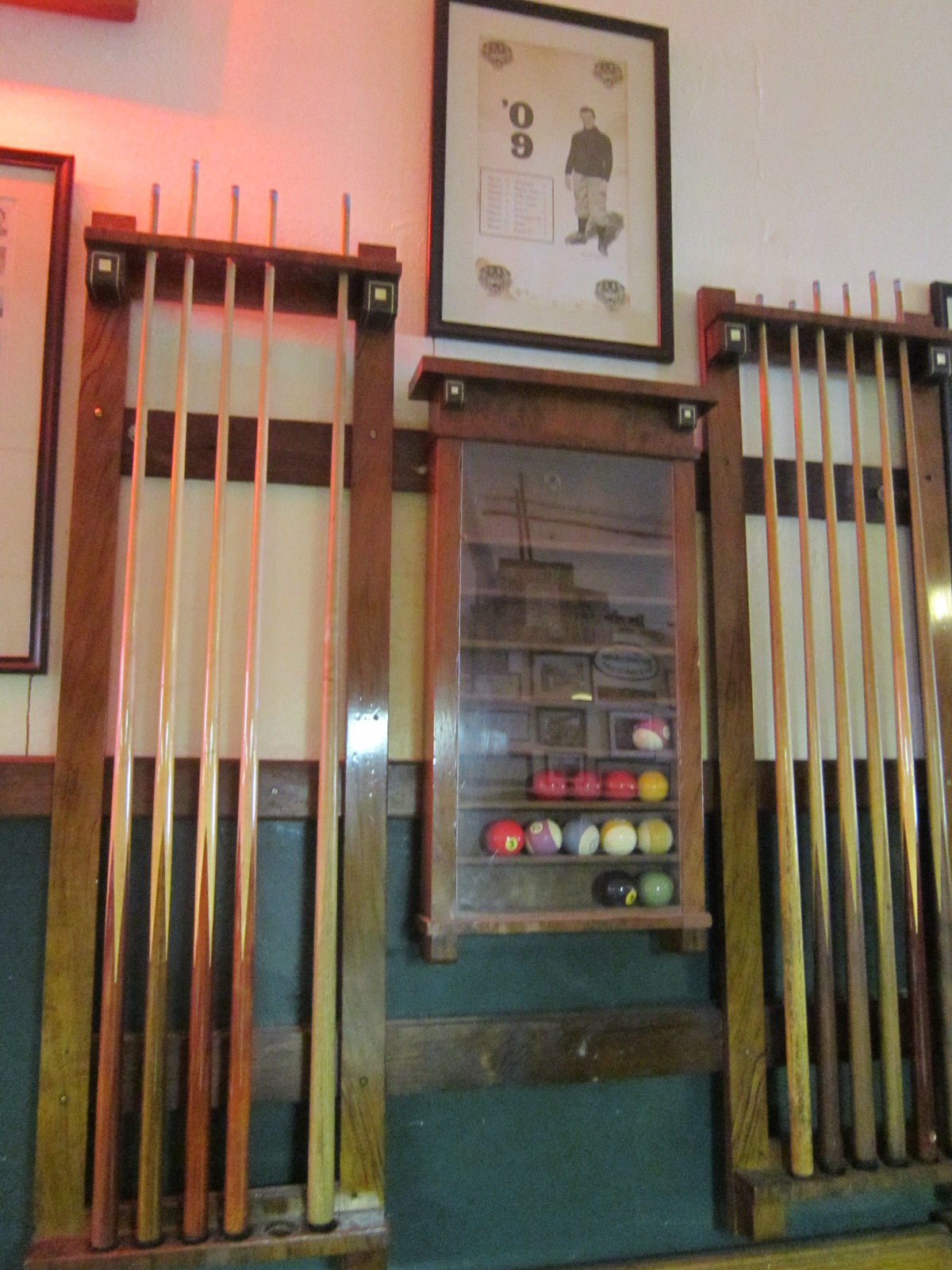 There are a half-dozen pool tables in the back half of Booches, with the cues and balls kept in historic racks on the walls. The walls are also covered with Mizzou sports photos and other memorabilia. 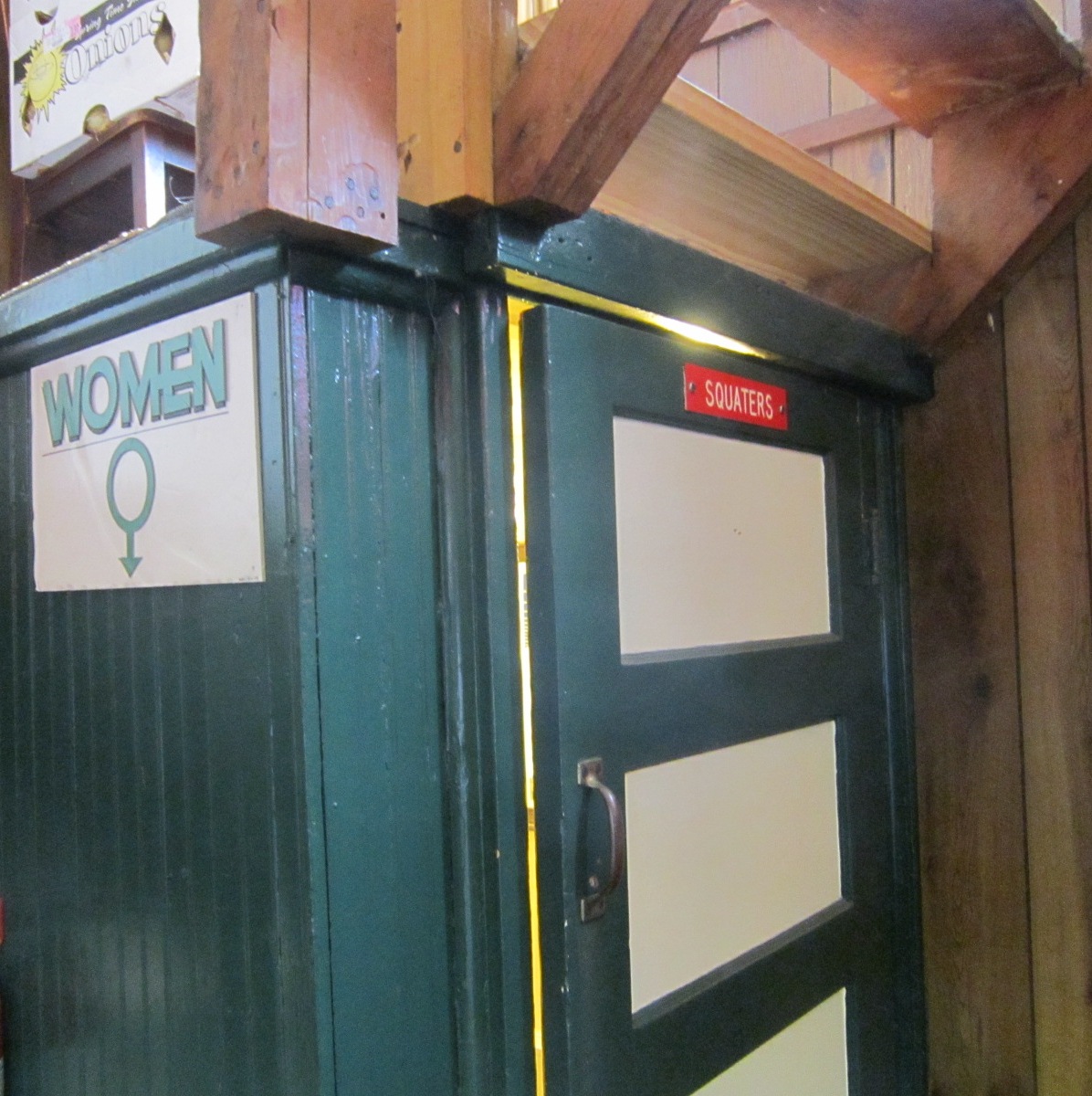 The women’s restroom in Booches pool hall is, uh, not fancy. 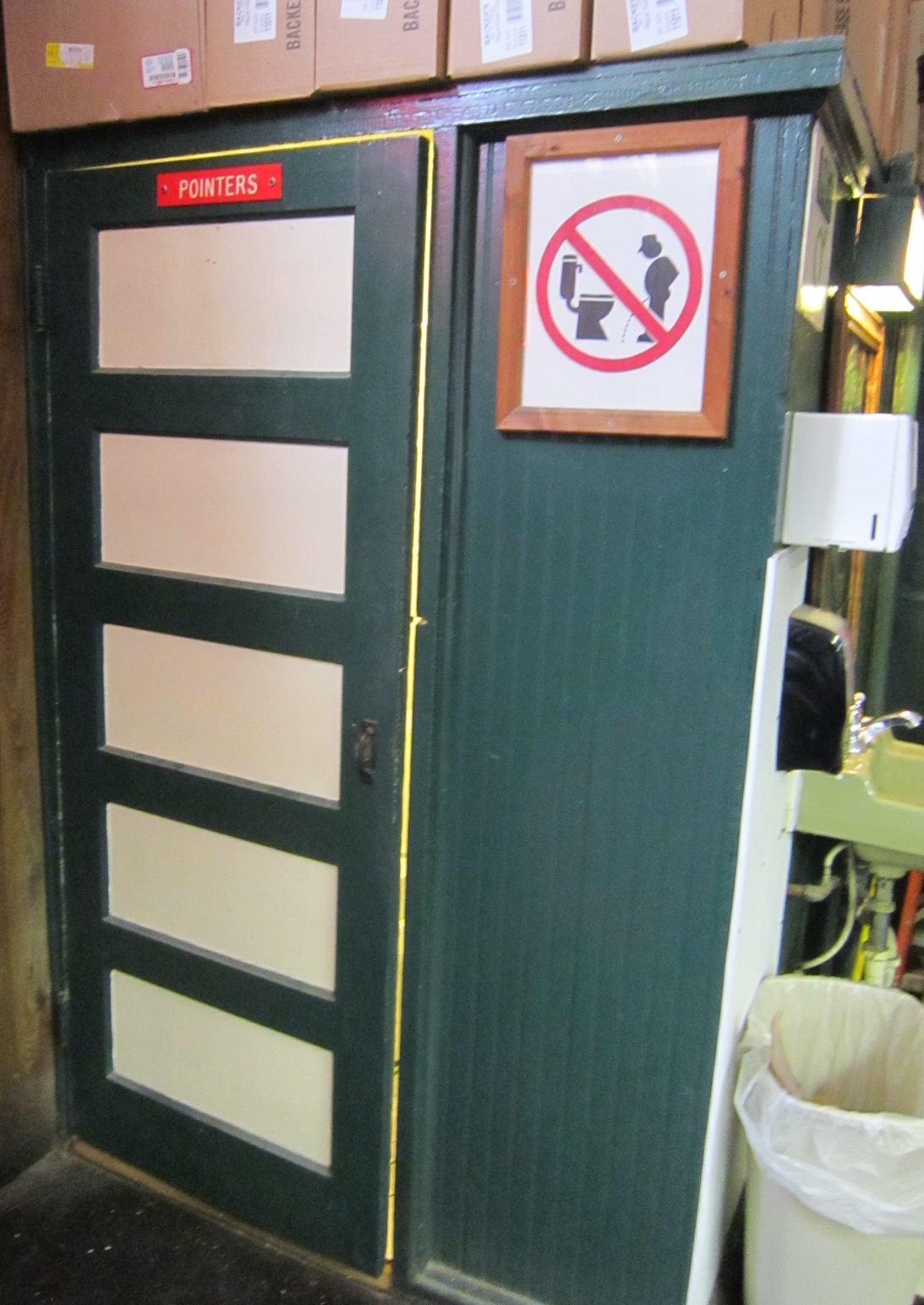 But then the men’s restroom in Booches isn’t fancy, either. 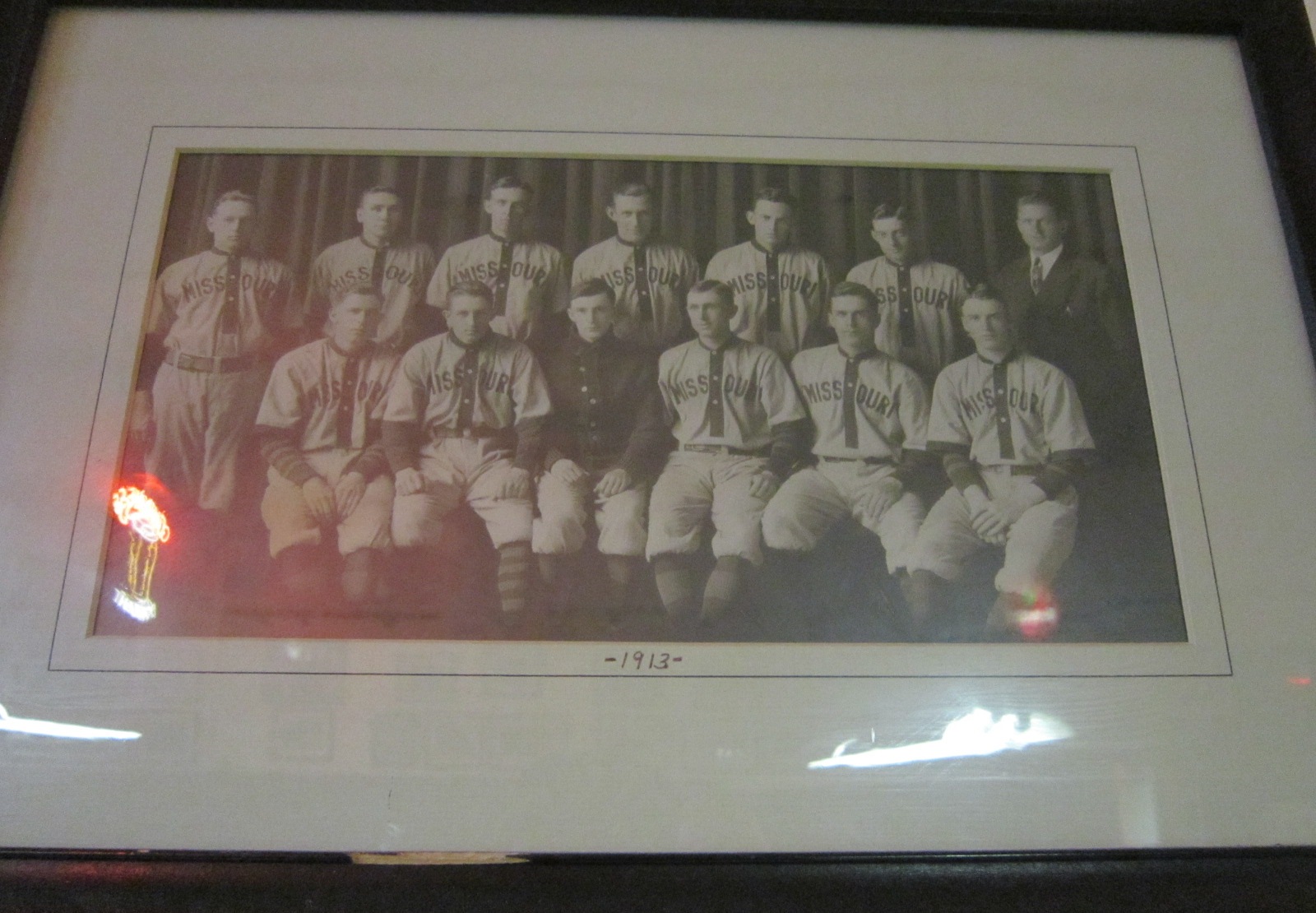 Booches walls have dozens of photos of former Missouri Tigers teams and individual stars, like this one of the 1913 baseball team. 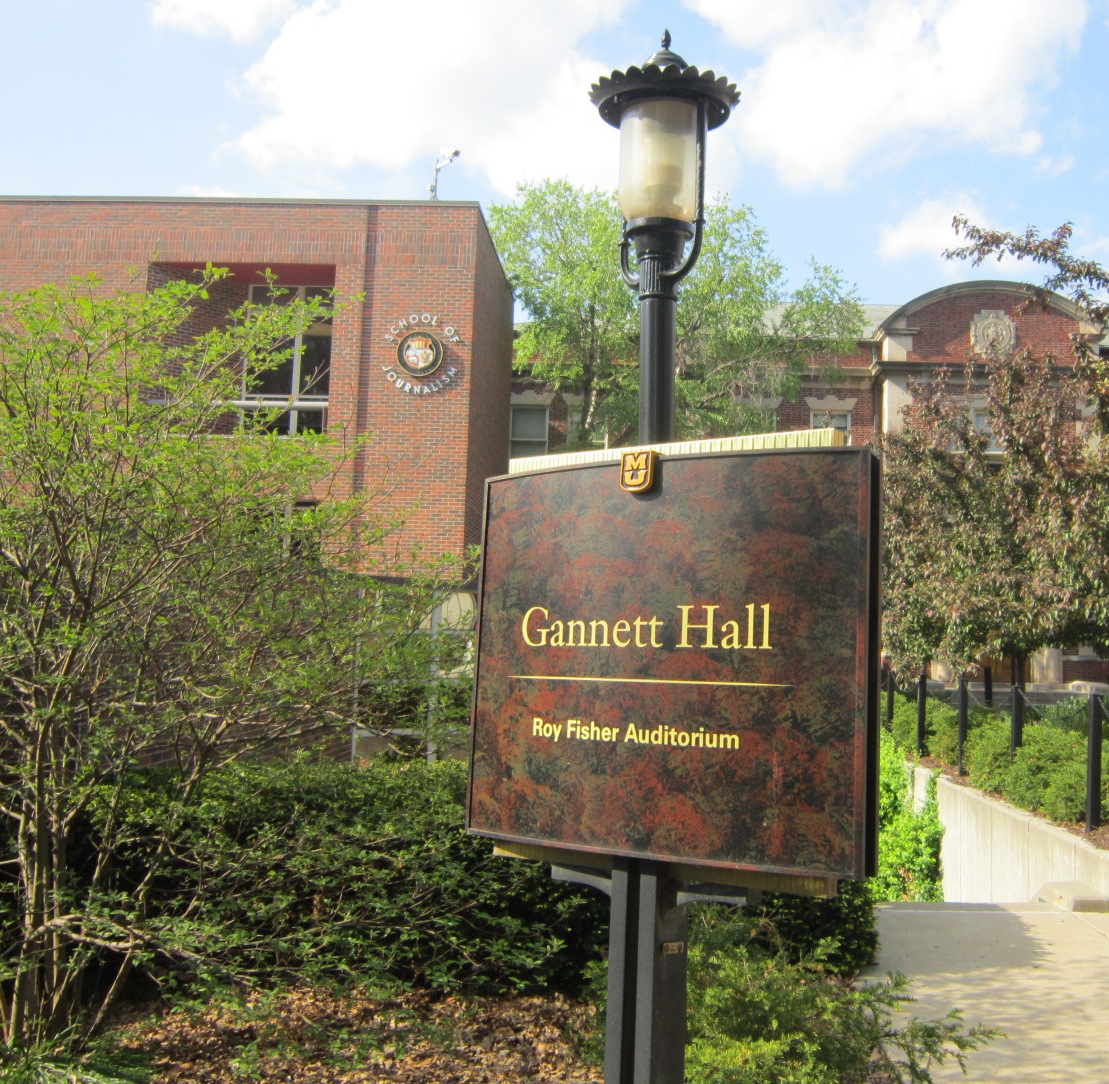 As we strolled the campus of MU, Chuck Offenburger of course wanted to walk by the university’s School of Journalism, which is regarded as one of the best in the nation.  A Gannett retiree himself, after all his years at the Des Moines Register, Chuck genuflected at this spot. 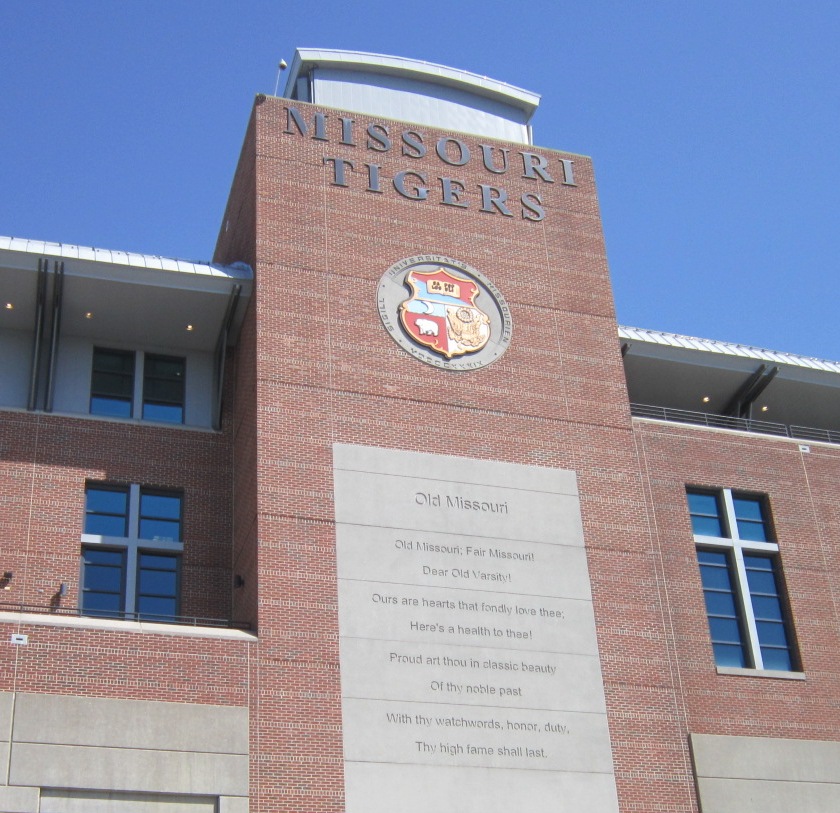 Missouri is completing a huge expansion and renovation of its football stadium, Faurot Field, and that project included this new press box tower.  We took time to read the words of the university’s Alma Mater “Old Missouri,” which is engraved on the exterior wall on the street-side of the structure. 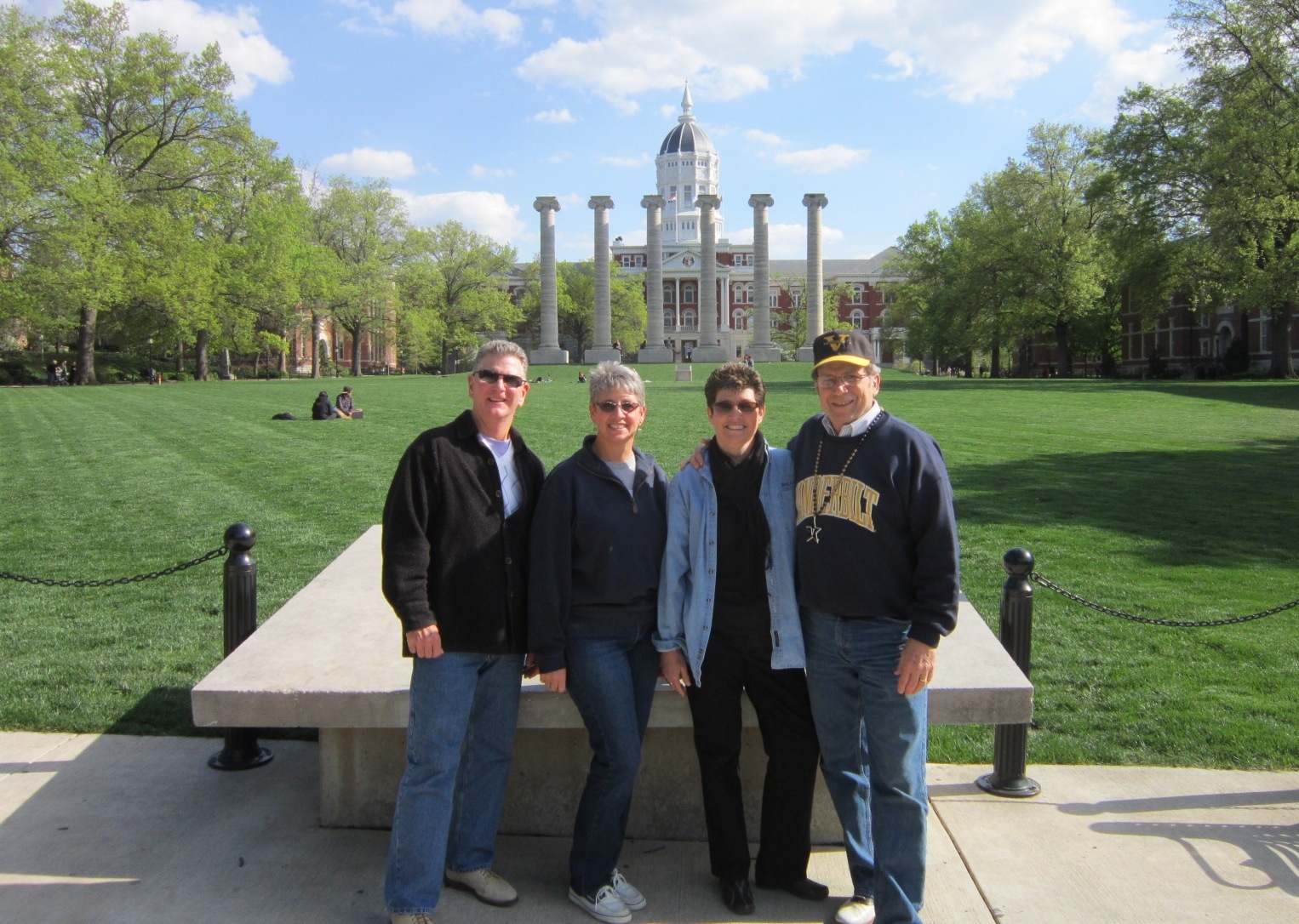 We also posed in front of “The Columns,” one of MU’s most beloved symbols.  The towering columns once held up the roof of Academic Hall, the first building on the campus in 1843.  It was later destroyed by fire, but the columns were preserved.  Today they are on the lawn in front of the stately-looking administration building.  Left to right here are Tony and Chris Woods and Carla and Chuck Offenburger.