The people of Offenburger.com

JEFFERSON, Iowa,  Sept. 13, 2022 — Hi, we’re Chuck Offenburger and Mary Riche, and we thank you for taking time to visit us here on one of Iowa’s oldest Internet news and opinion sites.

We generally come to you from either Jefferson or Des Moines, where we have our two homes.  Jefferson is about 55 miles west and north of Des Moines, which as you probably know is Iowa’s capital city.

Chuck is a mostly-retired journalist who spent much of his career as the “Iowa Boy” columnist for the Des Moines Register, and he’s written for several other Iowa-based publications.  He now writes columns on this website as well as on Substack, and you can get those Substack columns free by clicking right here: https://bit.ly/3RIQcZT.

Mary is a retired psychotherapist and licensed social worker, whose undergraduate degree was in journalism. She worked in political communications for a decade before operating her own public relations and marketing firm for a dozen years.  She will be writing occasional columns as well as doing photo essays. 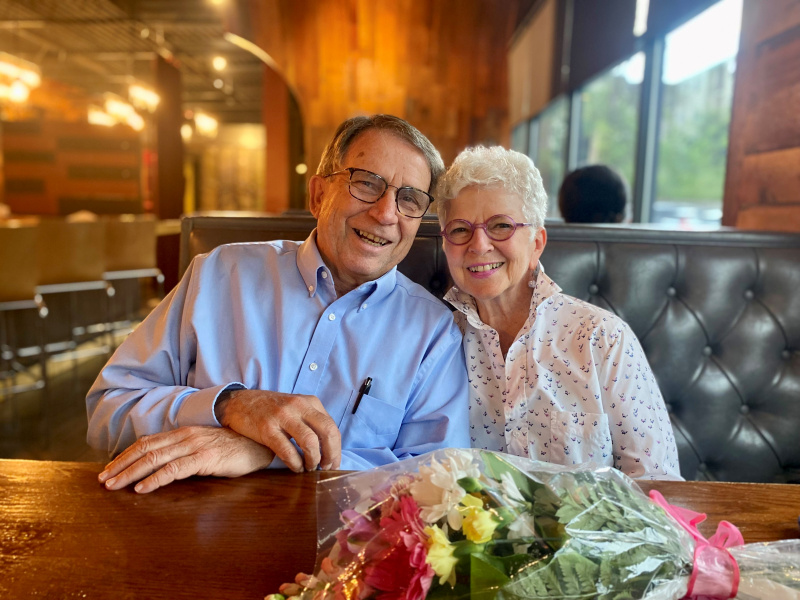 Chuck Offenburger and Mary Riche, just before our marriage in the fall of 2022.  (Photo by Pam Kenyon)

This website made its debut in March, 2001, as chuckoffenburger.com, to showcase and archive Chuck’s writing.

With its total redesign and expansion in January, 2003, the site became Offenburger.com, reflecting the increased involvement of Carla Offenburger, Chuck’s wife then, who was active in writing here until her death from cancer in July of 2021.

From the beginning, we have had terrific webmasters doing the creation, design, operation and enhancements on our site.  The first was Chuck’s son Andrew Offenburger, followed by Andy Upah, then the company G.Rafics Inc., of Adel, Iowa, then Emily Brewer Ressler, and now Carson Roberts.

We’ve had generous contribution of photos and columns from many friends.  Of special note, Offenburger.com for years published knock-out photographs of Iowa that were taken by Don Poggensee, of Ida Grove, in the northwest part of the state.  For three years, we actually employed Christie Vilsack as a columnist while she was serving as First Lady of Iowa.

For 18 years, we were able to operate Offenburger.com from an acreage outside the tiny Greene County town of Cooper, because of the excellent high-speed Internet service we buy from Jefferson Telecom, which continues as our provider today.

We have always basically been a non-profit enterprise, and for at least 10 years now, we’ve been non-profit on purpose.

We hope you’ll click-in on us from time to time, see what we’re up to, and perhaps decide you want to comment on our stories and columns — and perhaps write one yourself.