WATERLOO, Iowa, March 17, 2014 — For my farm neighbor and pal Doug Lawton, it was certainly a career highlight.  But heck, for any Iowan, watching a John Deere tractor being made at what’s always been known as Deere’s “Waterloo Works” factory should be a thrill.  It sure was for me one day last week.  What a way to start a new crop season!

Lawtons have farmed around our west central Iowa town of Cooper for five or six generations and well over 100 years.  But Doug, 59, thinks this is the first time any of them have ever ordered a tractor to be built for them.  “We generally bought used, or if we did buy new, it was from whatever was available on the implement dealer’s lot,” he said.  The Deere 7800 he’s been using for years is a 1993 model.  It was already used when his father-in-law Dick Wilcox purchased it, and eventually Doug bought it from Dick.

The time was right for a new tractor, a decision good farmers of today make only after a lot of consulting, test driving and study.  When input costs are so high — for land, seed, fertilizer, equipment, fuel, repairs — farmers have got to be as efficient as possible.  For someone who farms 1,600 acres, as Lawton does, that now pretty well means new equipment with the latest technology.

Salesman Jay Adamson, of Van Wall Equipment in Perry, who has sold the Lawtons a lot of machinery, helped Doug settle on an 8235R tractor and a new 16-row planter.  The equipment will be fully-loaded with Deere’s computer-driven Auto Trac system, which will enable the tractor to steer itself for precision fieldwork and planting.  Lawton estimates that “probably about half” of Greene County’s total acres will be farmed with similar technology this year.  I didn’t ask how much the new equipment is costing, but I know it’ll be worth a whole lot more than the three acres, farmhouse, tattered barn, garage, shed, two cars and three bicycles that we Offenburgers have!

It also meant Lawton qualified as a “Gold Key” Deere customer, and with that came the opportunity to take a couple family members or friends to Waterloo to watch the tractor being made, with a knowledgeable Deere tour guide being assigned to their small group.  Doug, his son-in-law Justin Towers, 31, and I made a day of it on Wednesday, March 12.

The “John Deere Waterloo Operations” — the formal name of the “Waterloo Works” — includes six facilities that have 7.2 million square feet of floor space for manufacturing in buildings that occupy 2,734 acres in Waterloo and Cedar Falls.  There are 6,500 employees working for the company in those two cities, and you’d be hard-pressed to find a friendlier workforce anywhere — but keep in mind I was in the company of a pretty large-scale Iowa farmer.  The Doug Lawtons of our state are justifiably treated like rock stars when they walk into those Deere facilities.  We spent the biggest part of our day in the “Tractor Cab Assembly Operatons” plant, but we also took a two-hour tour of the “Engine Works.”  We did not get to see the “Foundry,” the “Product Engineering Center,” the “Drivetrain Operations,” or the “Service Parts Operations.”

We had an outstanding tour guide in Gary Vick, who is now retired after a 30-plus-year career with Deere in Waterloo, in which he worked mainly as a machinist in the Engine Works, although he had other assignments, too.  His father worked at Deere before him, and his son and daughter-in-law work there now. I swear he knew everybody in the Tractor Cab Assembly plant, and they were all giving him a shout when he drove us around the 47-acre production floor, and stopped for conversations at several points of the assembly line. “If you’ve got any questions, you ask these people on the line and they’ll be happy to explain why we do things the way we do,” Vick told Lawton.  “And if you’ve got any suggestions, you tell them, too.  That’s how our products get changed and improved around here — because of things that people like you tell us.”

It was “a pretty awesome tour,” Towers said afterward.  Lawton said he “was amazed we got as close to the actual production as we did. I thought we might be walking up above it on a catwalk, looking down on it, but we were right there where we could talk to the workers.”  The two of them also were invited to go out to the testing area behind the plant and drive any tractor that was available that day.  Both opted for an 8000-series “tracked” tractor, one of those that comes with the rubber-belted tracks (think Army tanks or bulldozers) instead of wheels with tires.  Plus, Lawton got to drive a completed 8235 tractor, just like the one he was buying, off the assembly line.  Our tour guide Vick offered to let me drive any tractor I wanted to, too, but I told him that driving my John Deere lawn tractor stretches my qualifications, so I declined.

The day was a thrill, as I said earlier.  My gee-whizzer was stuck wide open, watching not only the incredibly talented and professional Deere workers, but also the dozen or so industrial robots we saw whirring, lifting, dipping, bolting, painting and other repetitive tasks that would 1) wear out a human workers and 2) probably be dangerous.  I don’t know whether I was more impressed by the technology Deere is building into its farm machinery or the technology they’re using to operate their plants.

But the neatest thing that happened all day was something that came to Lawton.  Production worker Shawn Downs had just talked us through the hydraulics testing he was doing on the new Lawton tractor on the assembly line.  When he got done and we were moving on, he walked over, shook hands with the farmer and said, “Thanks for buying Green.”

You can learn more about our experience in the 15 photos below here. 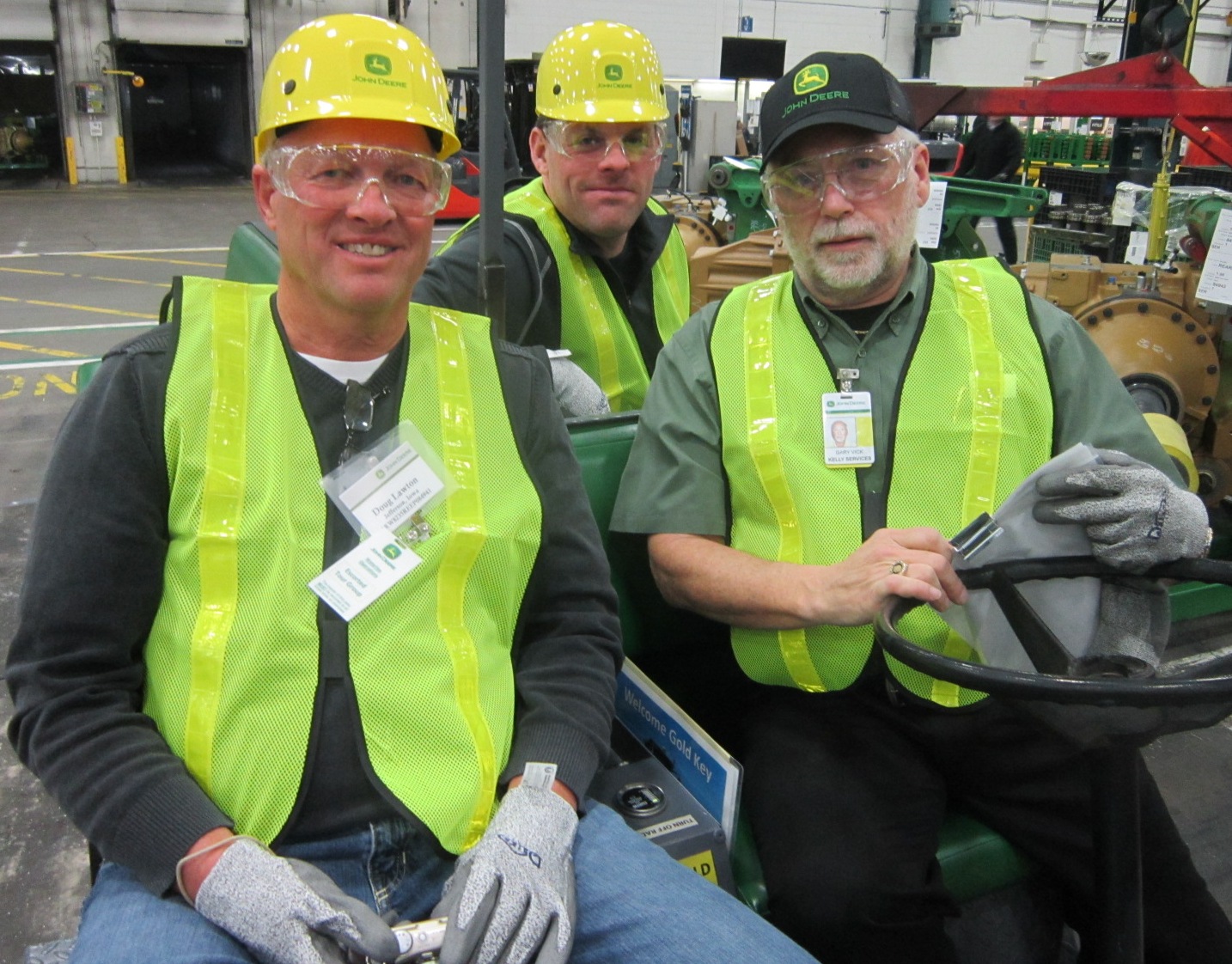 Here were (from left) Doug Lawton, his son-in-law Justin Towers and our John Deere tour guide Gary Vick as we started out to follow the new Lawton tractor being built at Deere’s Tractor Cab Assembly Operators in northeast Waterloo. 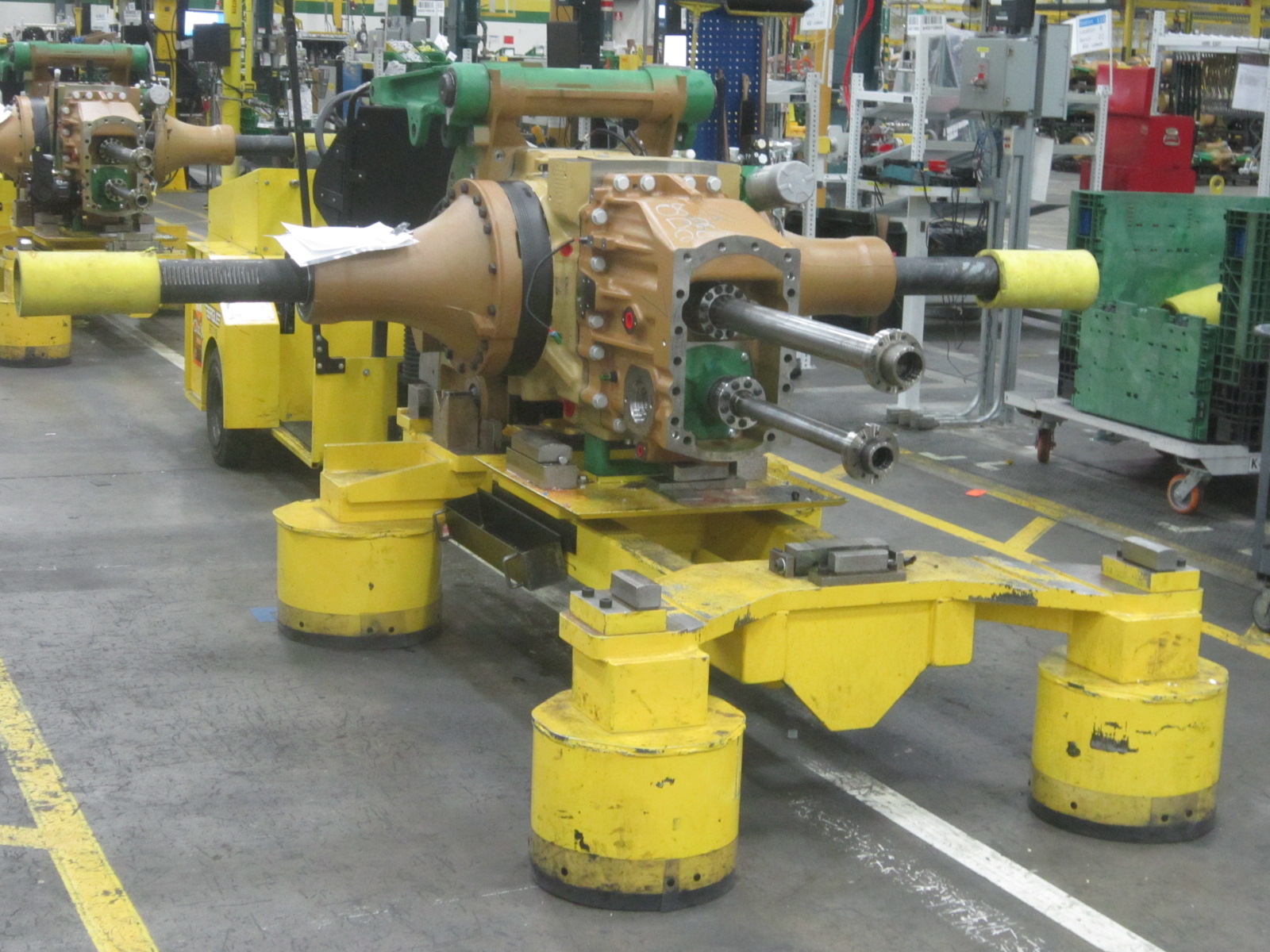 The rear end of the chassis moving through the assembly line. 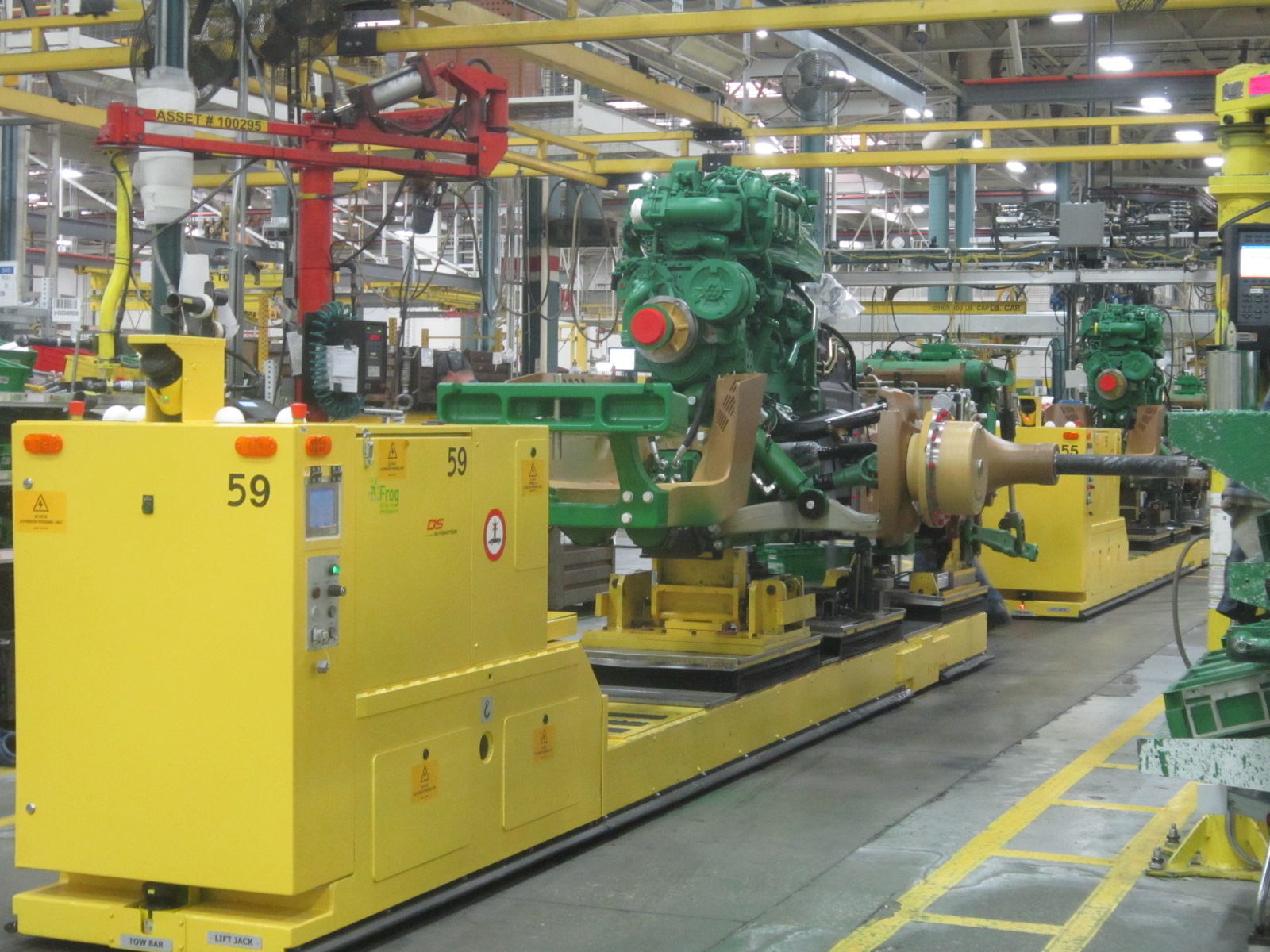 Here is the Lawton tractor being pulled through the assembly line aboard a computer-driven, un-manned “frog” that is guided by magnets in the factory floor. 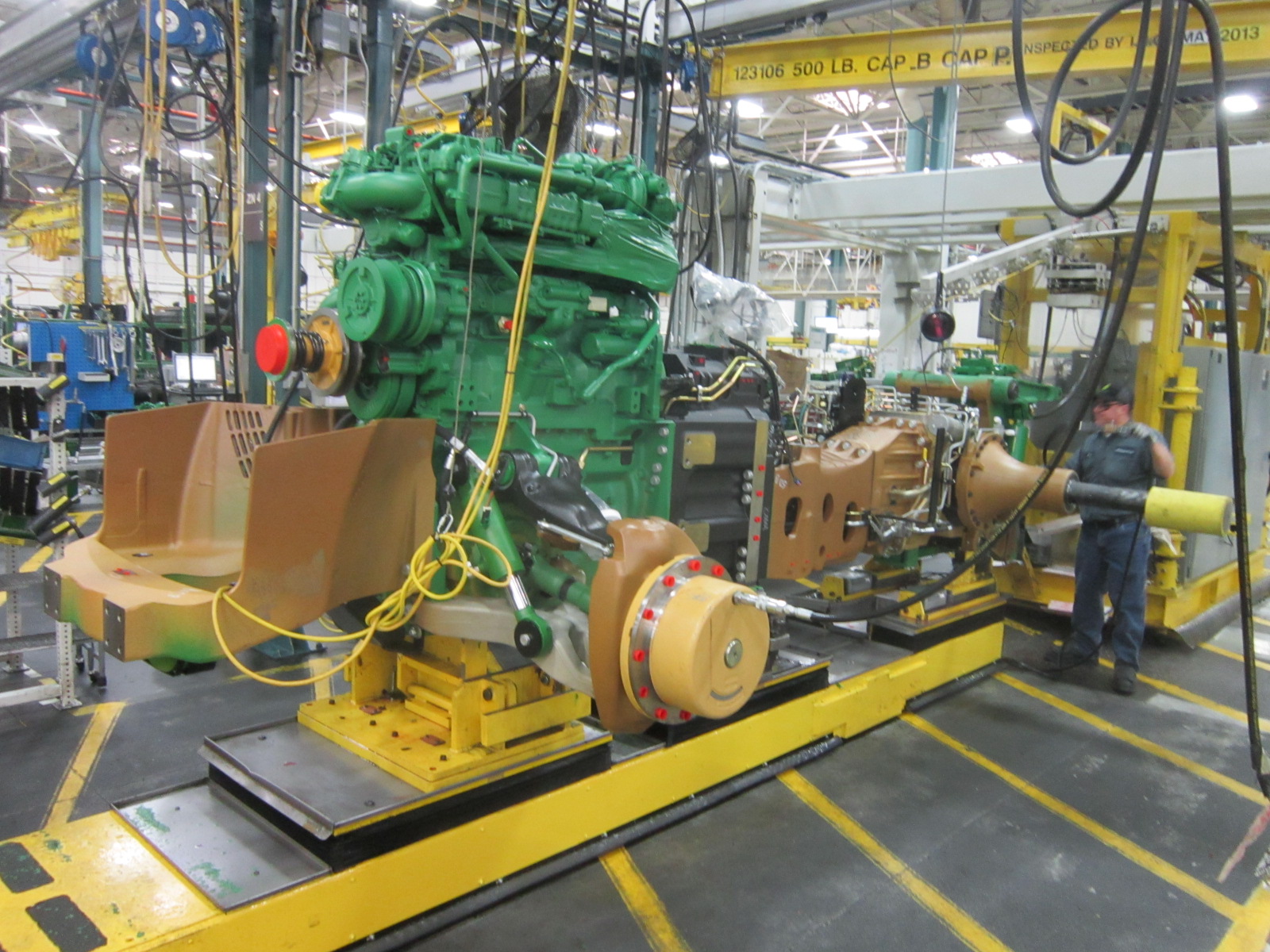 This is a closer view of the tractor’s chassis after the massive engine and transmission have been added. 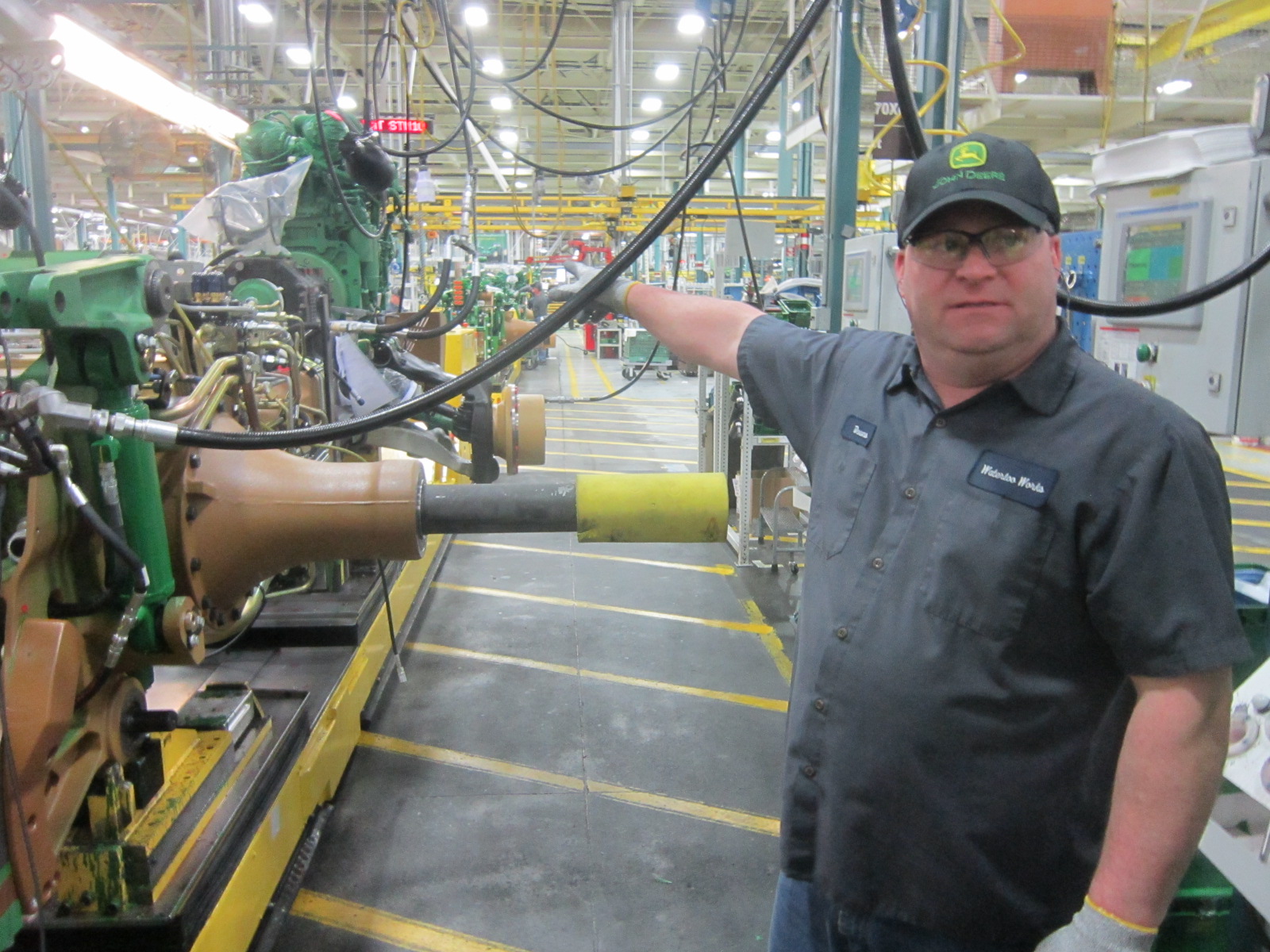 This Deere assembly line worker is shown explaining the testing that was being done on the hydraulics system on the new Lawton tractor. 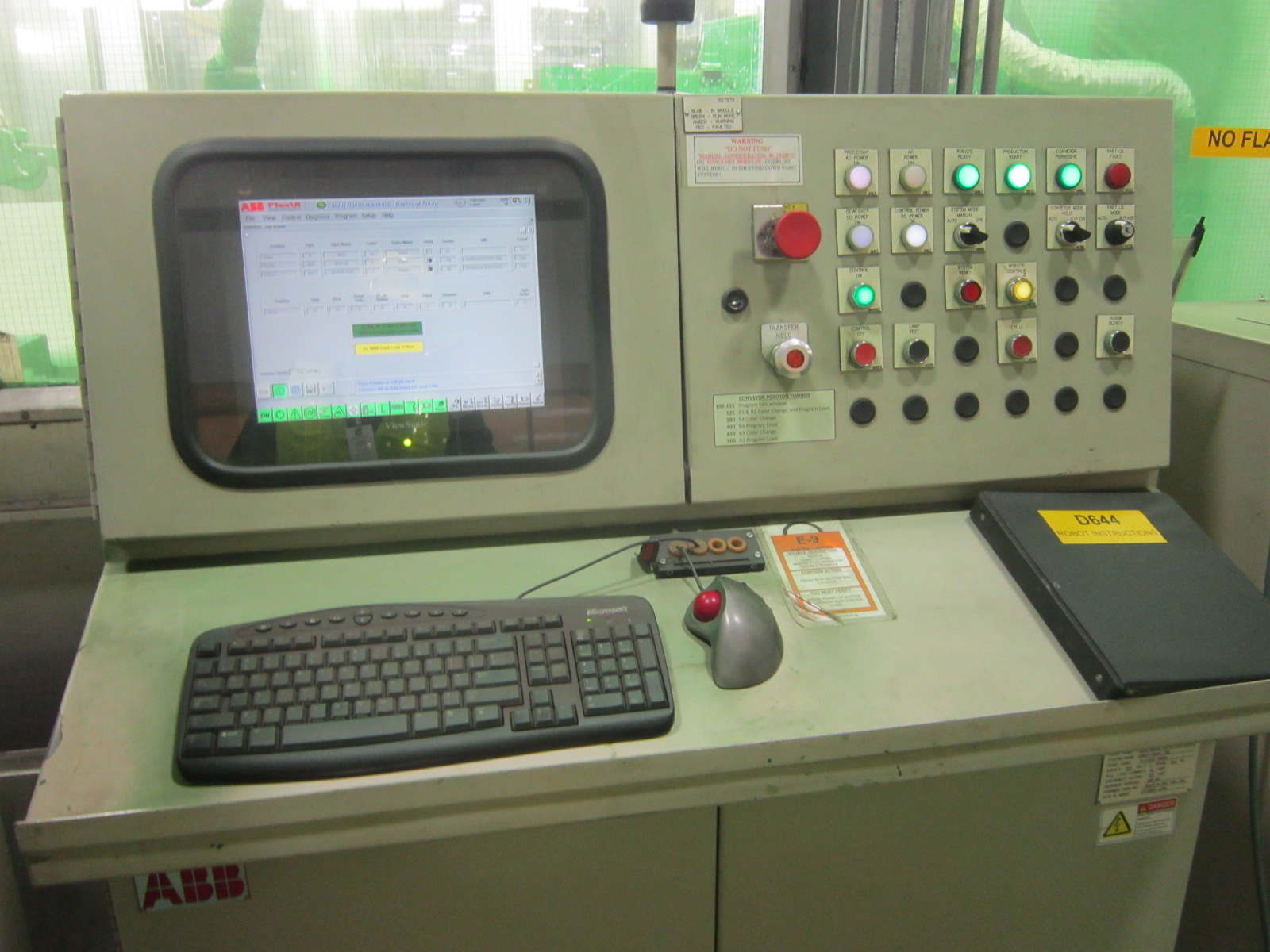 Here is an emergency control board right outside the paint booth, which is operated with full automation by a computer system elsewhere in the plant. 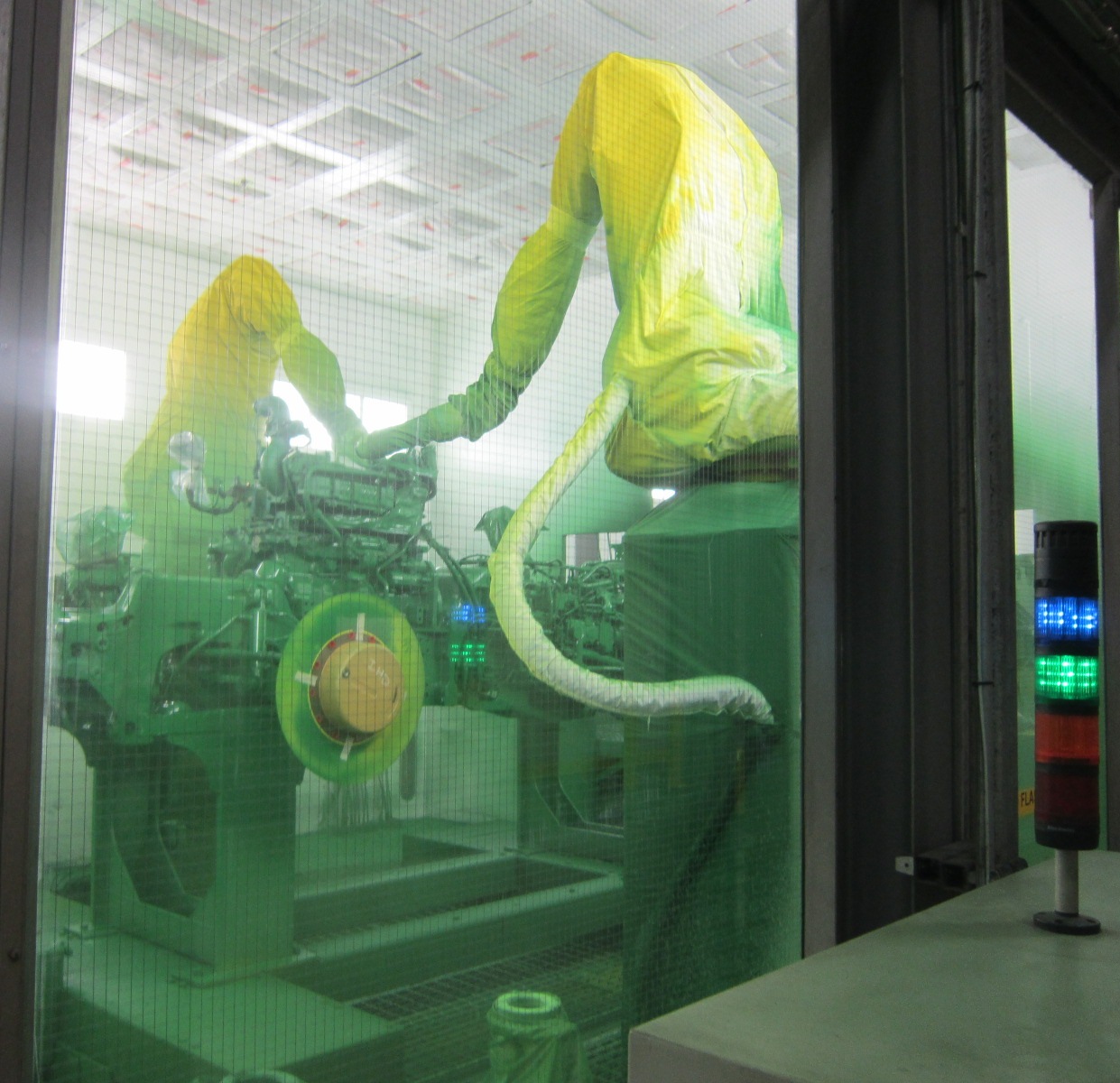 Industrial robots are shown spray painting the chassis of a tractor.  “Touch-ups” are done at the next pause on the assembly line, by human workers wearing protective suits with breathing equipment to protect them from the paint and fumes. 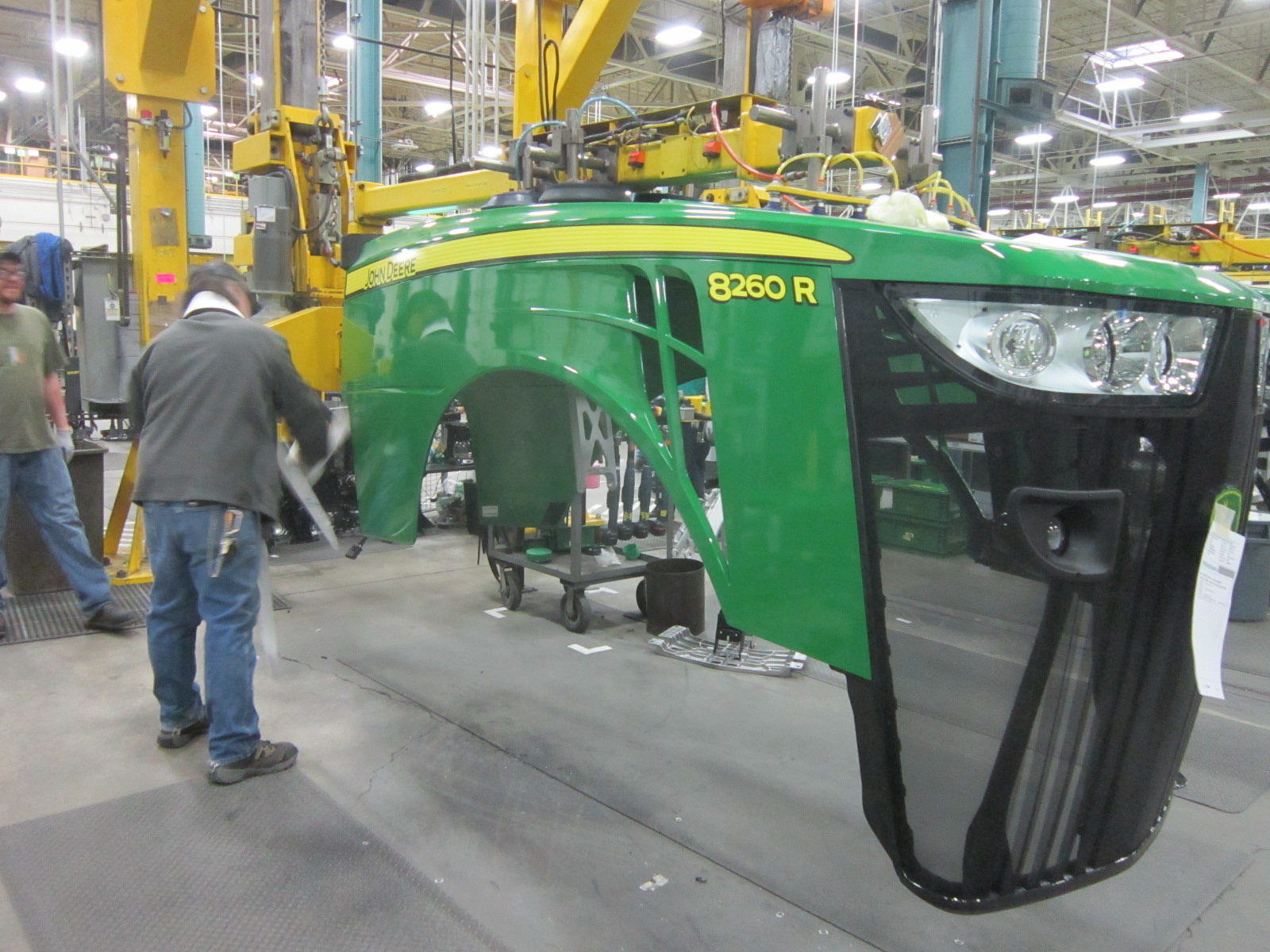 Here a worker has just applied the colorful decals to the hood for a tractor. 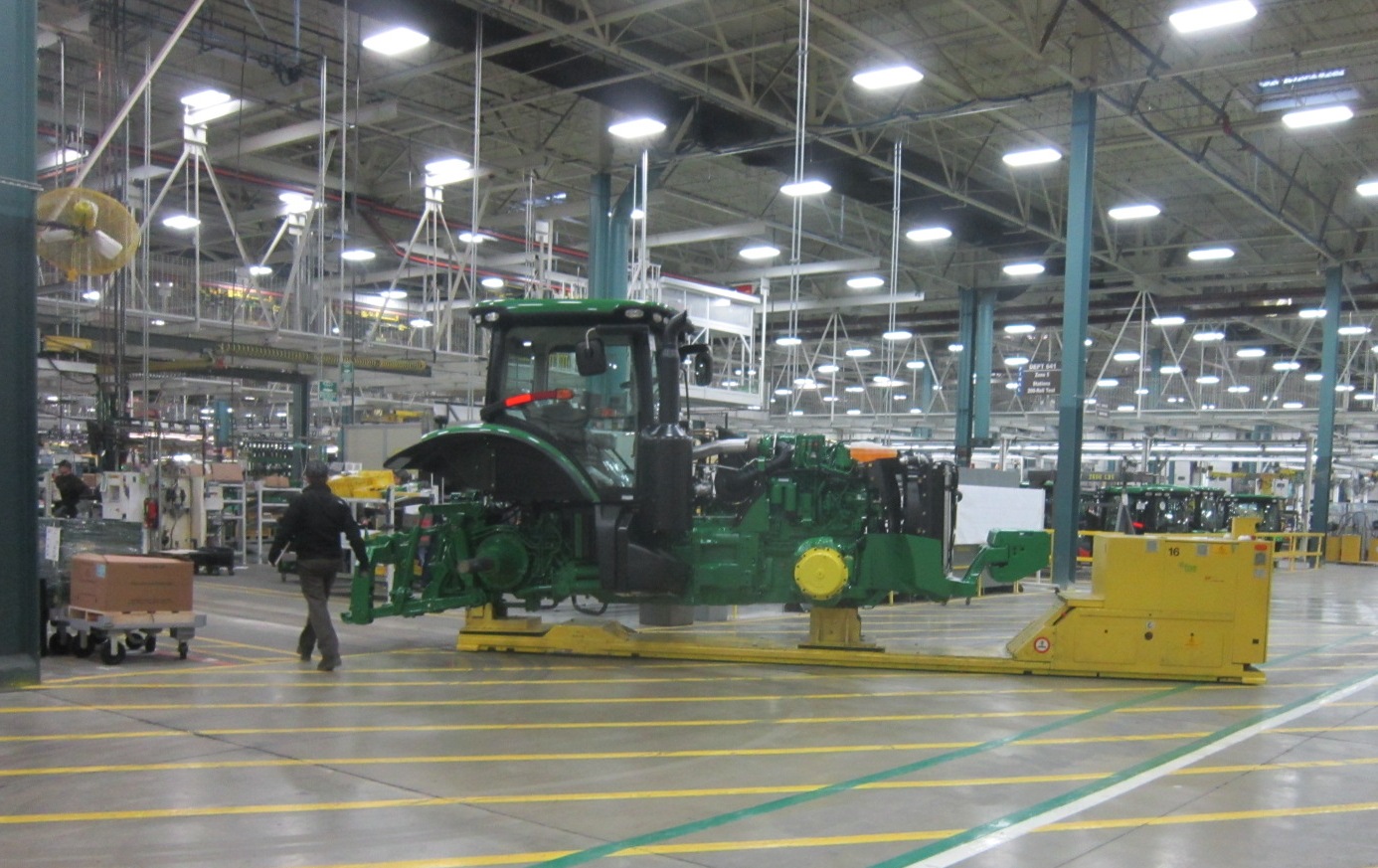 Here a tractor is moving on one of those un-manned, computer-driven “frogs” to the next stop on the assembly line. 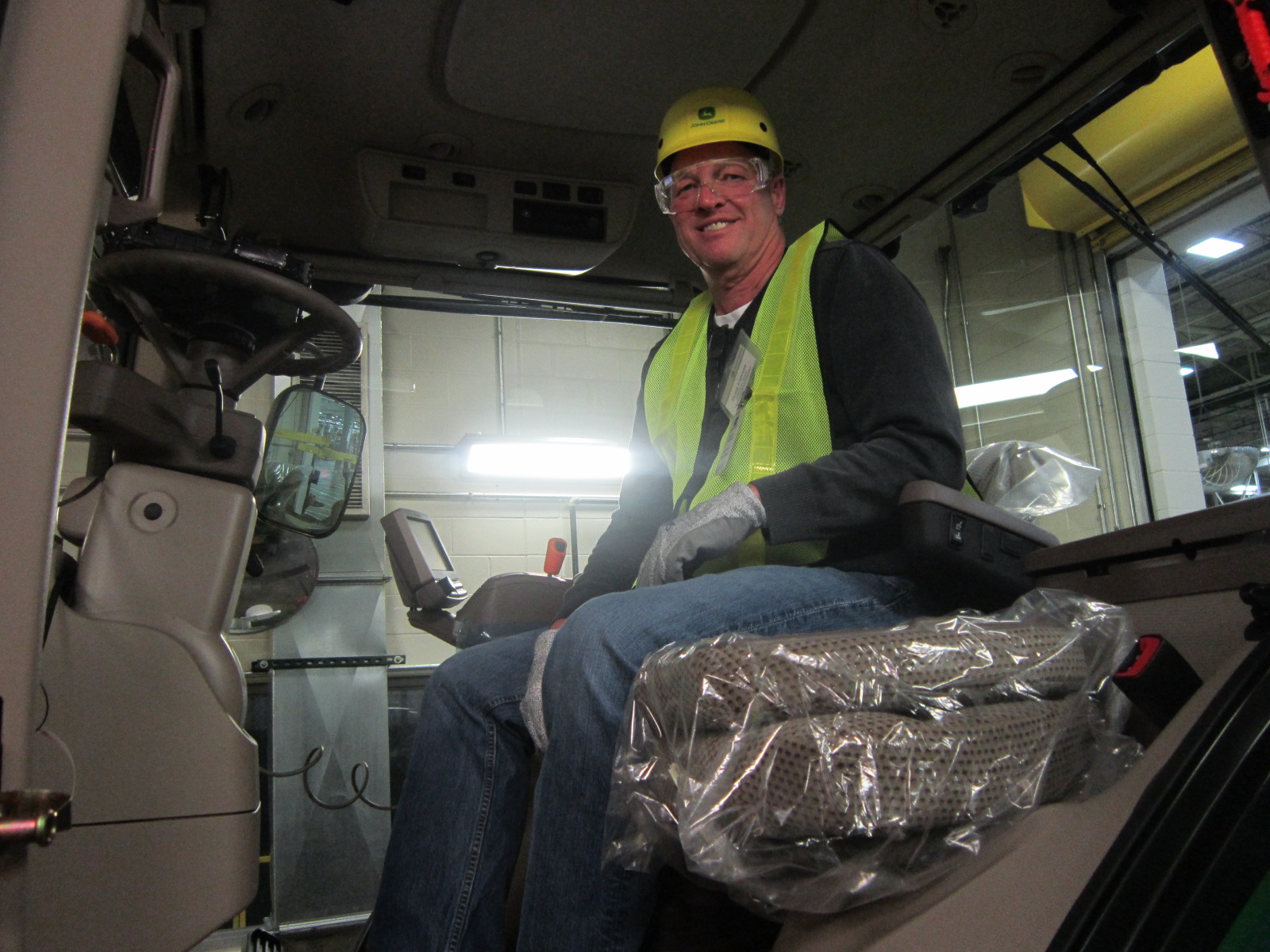 Here is Doug Lawton in the cab of a new tractor, more than a little amazed at how roomy it is. 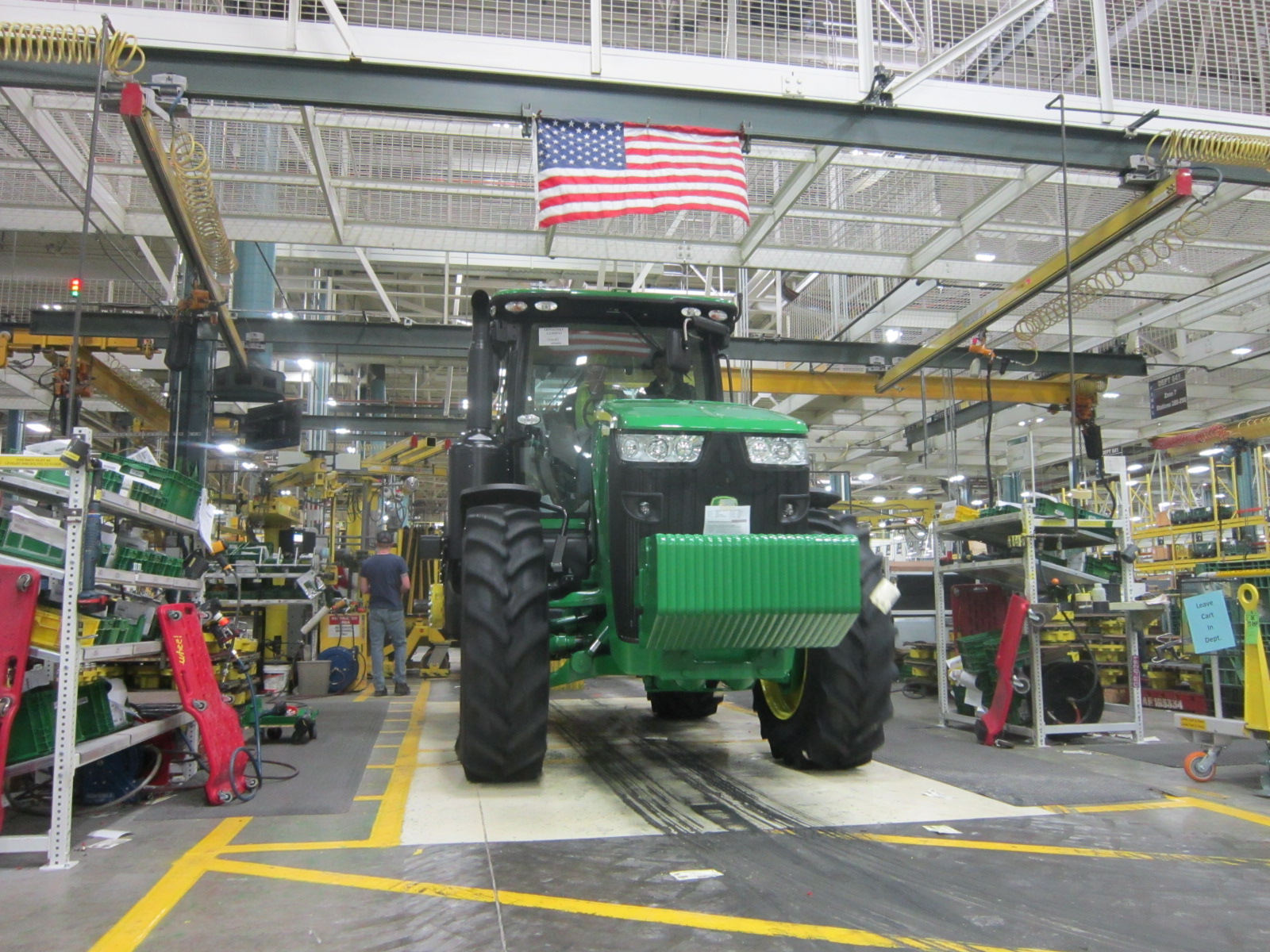 Here, Doug Lawton drives a tractor much like the new one he bought, off the assembly line and into an area where more quality checks are done. 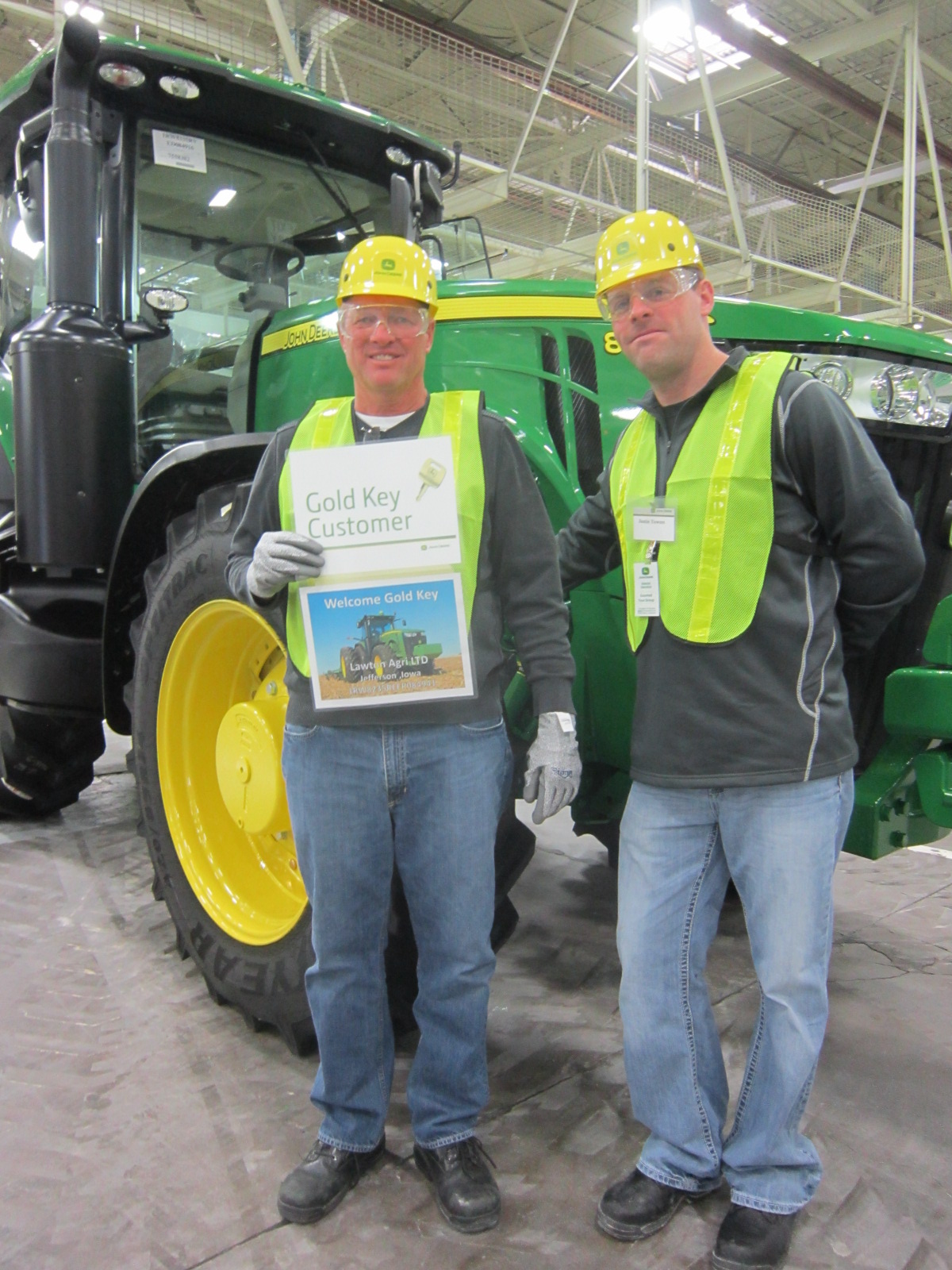 Doug Lawton and Justin Towers after the assembly. 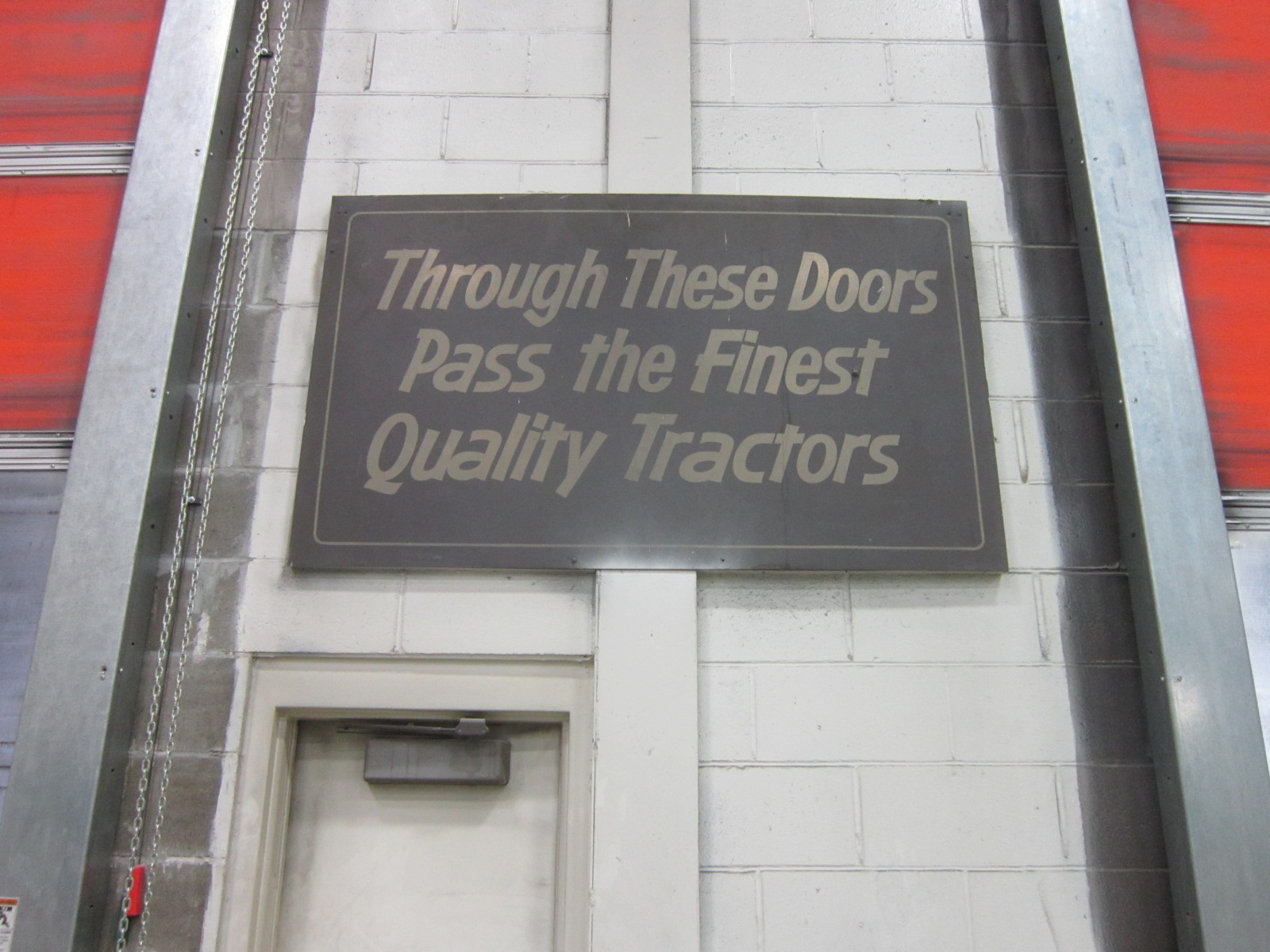 Sign at the big doors where tractors leave the assembly plant for outdoor testing and then the wait for pick-up by the implement dealer or customer. This fun display in one corner of the assembly plant shows an early version of Deere’s “Smart Machines” of today! 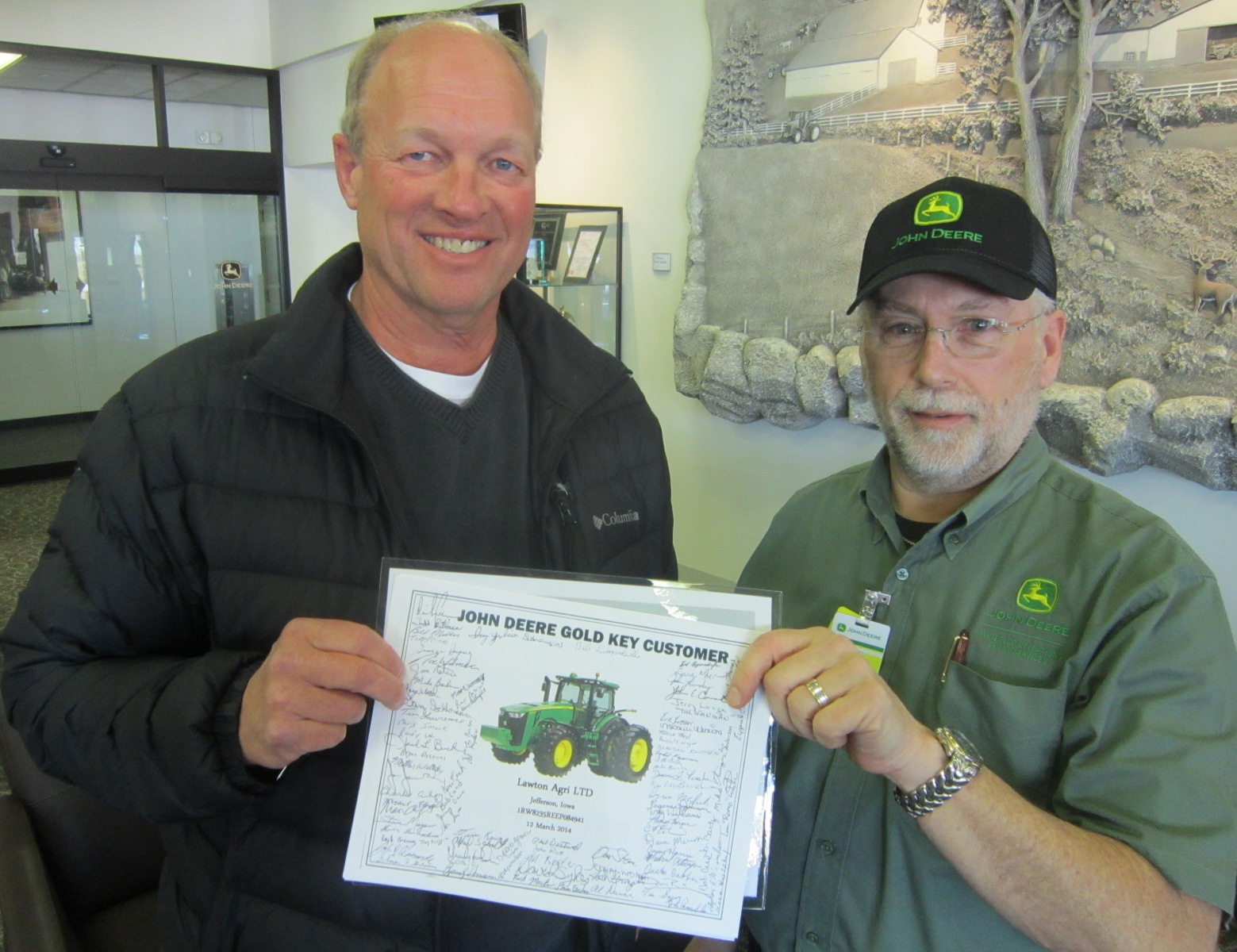 Here Deere’s Gary Vick presents Doug Lawton with a certificate signed by the assembly line workers who put the Lawton tractor together. 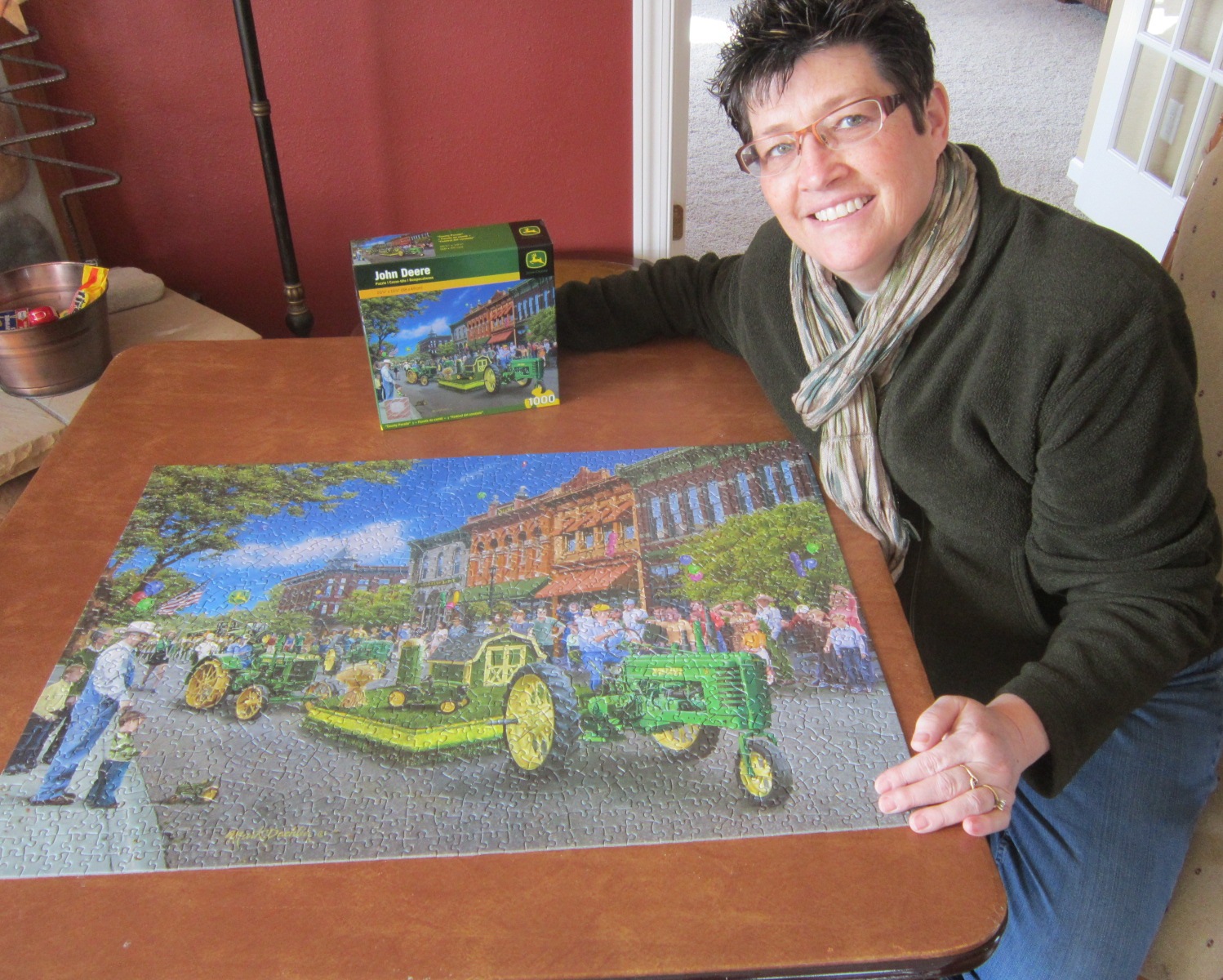 Before we left the Tractor Cab Assembly Operations plant, we made a stop in the Deere gift shop.  We all bought ball caps and other fun reminders of our experience, and Chuck Offenburger picked up a 1,000-piece puzzle for his wife Carla Offenburger, who is a real fan of puzzles.  “It’s a hard one,” Carla said, as she was completing it several days later. “I’m pretty sure it took me longer to put this puzzle together than it did for the Deere workers to build Doug’s tractor!”

6 thoughts on “FEATURE PHOTOS: Every Iowan should get a chance to see a John Deere tractor being made”