COOPER, Iowa, March 12, 2019 — I was happy to see that “best books of 2018” lists are still floating around as “new news,” even now in mid-March, because I haven’t taken the opportunity to write my year end synopsis of what I read in 2018. This is always a fun column for me, so I appreciate you readers cutting me some slack on my tardiness. After all, there’s still plenty of time to read in 2019. And honestly, that’s what I’ve been doing.

I’m already on track to get 52 books read during 2019 — that’s my goal every year  — with the best thus far “Becoming” by Michelle Obama. I don’t necessarily think you have to be a big Obama fan to love this incredibly graceful, powerful book, but since I am a fan, I found it extra special.

The very first book read in 2018 remains my favorite – “River of Doubt,” by Candice Millard. 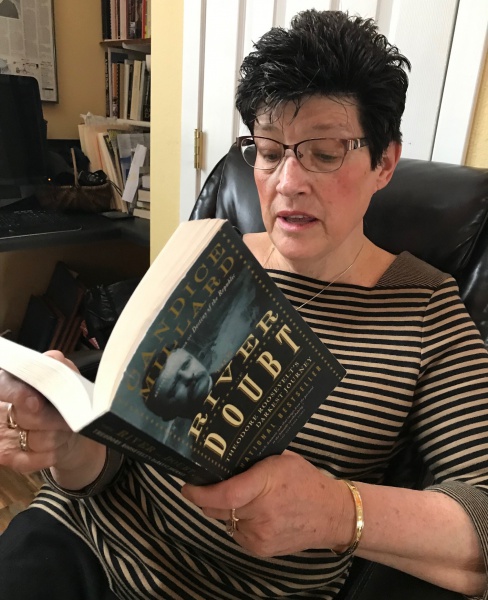 Carla Offenburger reading her favorite during 2018.

I wouldn’t have picked this up on my own but that’s what book clubs can do for you – take you out of your reading comfort zone.

This book swept me into the riveting story of President Theodore Roosevelt’s harrowing exploration of an uncharted tributary of the Amazon River in South America. The adventure came after his 1912 defeat for a third term in office.  Roosevelt sought a physical challenge like no other.  This wild river experience was just that.

Jungle? Amazon? Men with egos too large for their boats? Definitely not what I would pick up and read on my own. But I am so glad I did.  It was adventure, history, exploration, destruction, death and triumph all in 353 pages of terrific writing. And it was followed by another 37 pages of notes and eight pages of bibliography. Millard left nothing uncovered or undocumented. She made this an exceptional historical read.

A life changing book for me was one I actually ended up reading twice — “Tears We Cannot Stop,” by Michael Eric Dyson.

I first learned about this difficult read at my church, Plymouth Congregational United Church of Christ in Des Moines.

Dyson subtitled this “a sermon to white America.” And if it doesn’t change your perspective on your own white privilege or what living black can mean in America, you aren’t breathing the same air I do.  He helped me take a hard look at race in America when, toward the end of his book, he makes recommendations for an ongoing “educational” journey with a long list of recommended books.

So, I read “Born a Crime,” by Trevor Noah; “An American Marriage,” by Tara Jones. And I read a great deal of, but didn’t complete, two others — “The Warmth of Other Suns,” by Isabel Wilkerson, and “Many Thousand Gone,” by Ira Berlin. These were lengthy, difficult, text-book like reads, and since I didn’t complete either, I counted the two as one read for the year. Dyson’s list will keep me busy in 2019 too.

I was late in coming to the reading experience Kristin Hannah offers, as I read her for the first time in 2018. Her book “The Great Alone” was a troubling read because there was so much spousal/parental abuse.  But Hannah’s writing is so smooth her words just roll off the page. I then read another of her books, “The Nightingale,” which was breathtakingly beautiful and heartwrenching. Every time I mention her name, other readers are very much aware of her. Go figure. 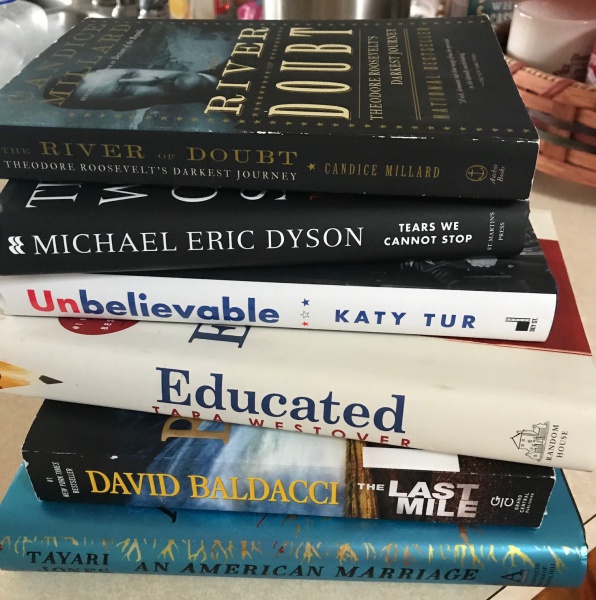 An unusual hit for me was David Baldacci’s “The Last Mile,” about a man on death row, an unsolved mystery, a determined agent and a lot of drama. I couldn’t put it down. Apparently this book is part of a “memory man” series Baldacci has done. I can’t say I’ll read the series, but I sure enjoyed this one.

Tara Westover had me from page one in her book “Educated.” It is the story of her growing-up years in Idaho in a fundamentalist Mormon family that is so atypical it’s hard to believe. After I read the book, I heard her on NPR and read reviews about her and her book, and that only made her story that much more compelling. This book was a gift to me; otherwise, I’m not sure it would have been on my reading radar.

I dived into NBC News correspondent Katy Tur’s “Unbelievable” – her story of covering the Donald Trump campaign leading up to his election in 2016. Indeed the story is unbelievably eye-opening. Wow, just wow!

I read absolutely wonderful fiction, too, including “How to Find Love in a Bookshop,” by Veronica Henry; “The Storied Life of A.J. Fikry,” by Gabrielle Zevin, and “The Sewing Machine,” by Natalie Fergie.

Every year has me returning to old favorites, and this year that included “My Antonia” by Willa Cather; “Night,” by Elie Wiesel, and “The Lion, The Witch and the Wardrobe,” by C.S. Lewis.

I finally was able to check “Dewey,” by Vicki Myron, off my reading list. This true tale of Dewey the cat living in the Spencer, Iowa public library, was worth every page.

A final one that I just insist you read (seriously) is “The Miraculous Journey of Edward Tulane,” by Kate DiCamillo. Because you have to.

Now, here’s the full list for my 2018 reading in the order I read them:

7 thoughts on “Our columnist read 57 books during 2018. Her favorite surprised her”