I’ve now finished my reading log for 2020, and given my health challenges, I’m happy to report I made it to 54 books.

Most of you know I am now in hospice care at home with my adenoid cystic carcinoma cancer.  I spent 2020’s first three months very ill, felt better through spring and mid-summer, and got the bad news in August that treatments were no longer working.  Now, as I look back over my list of titles and authors I read, I realize that during early parts of the year, which included radiation and heavy medication, I remember little about some of those.

Nevertheless, reading became more important than ever to me.

First of all, it’s one of the few things you can almost always do.  It has helped me fill time when all I could do was take medicine, rest and eat.  It also can be an escape when you’re feeling particularly fragile, worried or frightened.  When you don’t want to think about how you are dying, you can lose yourself in stories about somebody else’s garden.

You all ask me every year what the best book I read was, and for 2020, it was “Dear Edward,” a novel by Ann Napolitano about a young boy who is in a plane crash.  And that is all I’m telling you about it.  I am not one of those people who spills the beans on what the story line of a book is. 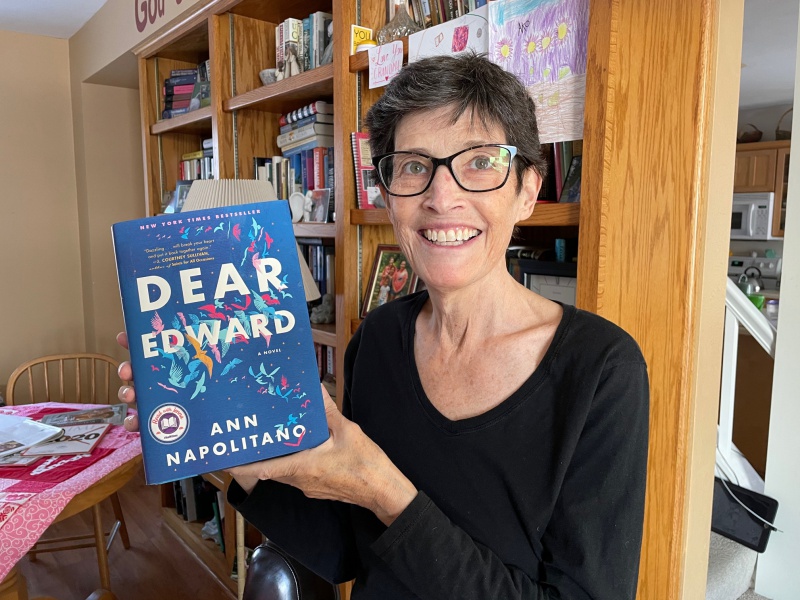 Carla Offenburger with her pick as the best book she read during 2020.

“Dear Edward” was a selection for the book club in Jefferson I am in, picked by our member Wendy Vander Linden.  We all liked it. So read it yourself.  You’ll be glad you did.

“Giver of Stars,” by JoJo Moyes.

“Talking to Strangers,” by Malcom Gladwell.

“Through a Country Town Cookbook,” by Evelyn Birkby.

“Where the Crawdads Sing,” by Delia Owens.

“My Grandmother asked me to tell you she’s sorry,” by Frederik Bachman.

“The Twelve Tribes of Hattie,” by Ayana Mathis.

“The Overstory,” by Richard Powers.

“This is how it always is,” by Laurie Frankel.

“Britt-Marie Was Here,” by Fredrik Bachman.

“Woman of the Boundary Waters,” by Justine Kerfoot.

“Charms for the Easy Life,” by Kaye Gibbons.

“Number the Stars,” by Lois Lowry.

“A Night Divided,” by Jennifer Nielsen.

“The Body,” by Bill Bryson. And gave it a second reading, too.

“The Recipe Box,” by Viola Shipman.

“A Wrinkle in Time,” by Madeleine L’Engle.

“The Charm Bracelet,” by Viola Shipman.

“Nothing Ventured,” by Jeffrey Archer.

“The Bookshop of Yesterdays,” by Amy Meyerson.

“The Heirloom Garden,” by Viola Shipman. Note: This isn’t the best book I’ve ever read, by far, but it is another favorite for this year. Shipman’s use of the garden and plants to frame the chapters and characters makes it valuable to me personally.  And I’ll add that had this book been the last one I was given the chance to read, I’d die happy. Just sayin’.

“The Girl You Left Behind,” by JoJo Moyes.

“The Book Woman of Troublesome Creek,” by Kim Michelle Richardson.

“A Walk Along the Beach,” by Debbie Macomber.

“Between Sisters,” by Kristan Hannah.

“Kopp Sisters on the March,” by Amy Stewart.

“The Story of Arthur Truluv,” by Elizabeth Berg.

“Jane Austen was Here: An Illustrated Guide to Jane Austen’s England,” by Nicole Jacobsen and Devynn Dayton, with illustrations by Lexi K. Nilson.

“When Books Went to War,” by Molly Guptill Manning.

“The Quilter’s Legacy,” by Jennifer Chiaverini.

“The Pioneers,” by David McCullough.

“People of the Whale,” by Linda Hogan.

“The Hate U Give,” by Angie Thomas.

“The Christmas Basket,” by Debbie Macomber.

“The Splendid and the Vile,” by Erik Larson.

“The Heart Hungers for Wildness: Poetry,” by Diane Glass.

“The Book of Two Ways,” by Jodi Picoult.

You can write the columnist by email at carla@Offenburger.com, or comment directly about this column by using the handy form below here.

13 thoughts on “Carla’s reading report for 2020 was 54 books. They lifted her spirits like never before.”