It wasn’t my best reading year, as I only got 52 books read, but it was a good one, all things considered. In 2015 I read 66 books, and I think that was my best year since I’ve kept track since 2003. Interesting enough, one of those 66 books was the whole Bible. That was also the year I had my second major cancer surgery, so I had some extra time on my hands.

I’m so grateful that with all the things I had going on with my health in 2017 that I could continue to focus on reading a wide variety of books, and stay focused on my reading goal of at least one book per week. It’s a bit easier since I belong to two book groups – one in Jefferson and one in Des Moines – but sometimes it can still be a challenge. 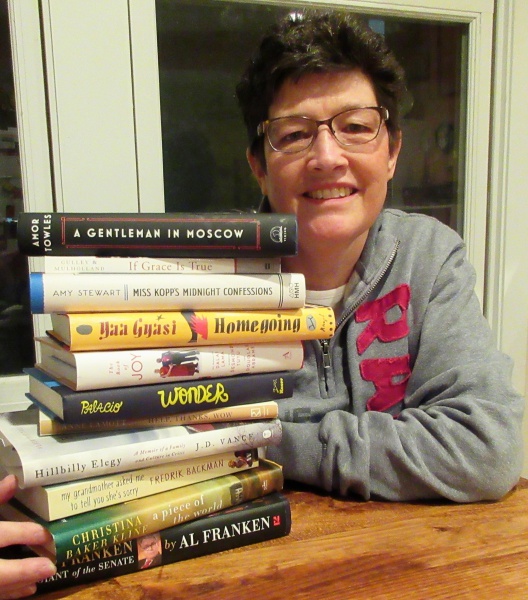 Carla Offenburger with one stack of her favorites from 2017.

One of the neat reading transformations that occurred in 2017 was that my granddaughters Lindsay and Casey Offenburger, 10 and 7, started recommending books for me to read. In fact, one of the coolest books to hit my 2017 favorites was their recommendation — “Wonder,” by R.J. Palacio. Lindsay and Casey even insisted that “you must read the book before you see the movie, Grandma.” I believe I’ve had a bit of reading influence with them. Don’t you?

Getting Lindsay to loan me her copy of “Wonder” led to a great discussion about loaning out books. She loves her books as much as I do mine, and there are some you just don’t want to risk “loaning.” I assured her, it was O.K. to say, “I’m sorry, I don’t loan out this book, or author, or series.” I told her to direct her friends to the library if she must, but guard the books most important to her, by saying “Sorry.” The “Harry Potter” series I gifted her last year falls into that “guarded” category for her. So did “Wonder.” Lucky for me, I was able to convince her that my love and respect for books would ensure that her book was safe with me.

Here are the other books that made my list of favorites, with my most favorite at the bottom here, just to keep you reading this:

“The Windward Shore,” by Jerry Dennis. I read this with my Jefferson book group and was surprised at how captivated I was by this nonfiction account of winter months on the Lake Michigan shoreline.

“Tru & Nelle,” by G. Neri. This fictionalized tale of the childhood friendship of writers Truman Capote and Harper Lee is irresistible

“50 Days of Hope,” by Lynn Eib. This made my reading list more than once this past year. It’s my personal cancer support book. Eib shares uplifting stories of cancer survivors intertwined with the importance of faith in God during one’s cancer journey. I could not be doing my cancer journey like I am without this book.

“Winter Bloom,” by Tara Heavey. This was a recommendation from my Jefferson friend Nancy Teusch. I refer to it as an adult version of “The Secret Garden,” which is a book I often read in the spring. Warm and rich.

“The Little Paris Bookshop,” by Nina George. The title should be enough to fall in love with this novel. And when the bookshop in Paris is a barge floating down the Seine, how can one resist?

“Al Franken: Giant of the Senate,” by Al Franken, former comedian and former U.S. Senator from Minnesota. I read this one in August and learned so much about how the Senate operates and how Franken believes it could operate. I laughed and learned at the same time. Of course, I was terribly disappointed by the turn of events for Franken by the end of the year – he resigned from the Senate after being accused of past sexual harassment – but the book still makes my list for many reasons.

“Pictures of Hollis Woods,” by Patricia Reilly Giff. This novel is so heartwarming and endearing just writing this makes me want to re-read it. And since it is a young adult Newberry Honor Award winner, I’ll be able to recommend it to my granddaughter Lindsey soon. Don’t dismiss this one just because it’s a young adult book.

“A Piece of the World,” by Christina Baker Kline. A surprise favorite, but what Kline imagines can happen against the backdrop of the work of artist Andrew Wyeth came together with a feeling of great warmth and tragedy, all wrapped between the book covers.

“If Grace Is True,” by Philip Gulley and James Mulholland, Quaker ministers. I’ve read this book a few times over the course of the last few years. And I believe the authors’ take on how God will save every single one of us – because His grace is true.

“Homegoing,” by Yaa Gyasi. I read this novel twice in 2017 – early in the year after having received it for my birthday and again in November when I recommended it to my Des Moines book group. It didn’t make the “favorites” highlight until the second time around. It’s that kind of book. Takes two readings to really appreciate its richness and depth. By the way, Gyasi is a graduate of the acclaimed University of Iowa Writers Workshop, and this debut novel brought her a six-figure advance.

“Wonder,” by RJ Palacio. As I wrote above, I read this at the recommendation of my granddaughters. And no, I haven’t seen the movie.

“The Uncommon Reader,” by Alan Bennett. This is the most fun and refreshing fictional story about the Queen of England discovering reading. It’s so fun and light, the only thing that could make it better was if it were true.

“The Book of Joy,” by His Holiness the Dalai Lama and Archbishop Desmond Tutu, with Douglas Abrams. Required reading by all of us. It will make you appreciate how to live with more joy and happiness than you can imagine. And who of us doesn’t need to be doing that, right now?

“My Grandmother Asked Me to Tell You She’s Sorry,” a novel by Fredrik Backman. Backman is the author of “A Man Called Ove,” a 2016 favorite of mine. This book has his same great writing style, but is richer and much more rewarding.

“Miss Kopp’s Midnight Confessions,” by Amy Stewart. This is the third in a series for Stewart. The fictional stories are based on a newspaper headline Stewart saw when researching for another book. That first series book was “Girl Waits with Gun.” She read the news story and took fact and fiction and created a fun series that is quick and easy. We all need books like this occasionally – or often.

“Help, Thanks, Wow,” by Anne Lamott. I always find solace in Lamott’s books, and there’s no better way to end the year of reading than by re-reading this one. It reminds us all that our “essential” prayers can be pared down to three words – “help,” “thanks” and “wow.”

“A Gentleman in Moscow,” by Amor Towles. This novel, published in 2016, is set in 1922 Russia in the years after the Bolshevik Revolution. You’ll fall in love with the “gentleman” in this book, Count Alexander Rostov, as he maneuvers through his house arrest with incredible grace. This was another book the Jefferson book group shared. If you read only one book in 2018, make it this one.

“This Was A Man,” by Jeffrey Archer, final volume of his “Clifton Chronicles.”

“The Buried Giants,” by Kazuo Ishiguro.

“The Dream Lover,” by Elizabeth Berg.

“The Secret Chord,” by Geraldine Brooks.

“The Energy Bus,” by Jon Gordon.

“Crossing the Horizon,” by Laurie Notaro.

“Hey Cupcake! We are all Leaders,” by Liz Jazwiec.

“The Totally Unscientific Study of the Search for Human Happiness,” by Paula Poundstone.

“The Orphan’s Tale,” by Pam Jenoff.

“At the Water’s Edge,” by Sara Gruen.

“Books for Living,” by Will Schwalbe.

“The Vanishing Act of Esme Lennox,” by Maggie O’Farrell.

“Rod: The Autobiography,” by Rod Stewart.

“The Spy,” by Paulo Coelho.

“Of Mess and Moxy,” by Jen Hatmaker.

“The Weight of Silence,” by Heather Gudenkauf.

“It’s Up to the Women,” by Eleanor Roosevelt.

“Circling the Sun,” by Paula McLain.

I need to get reading. Right now, I’m finishing up Dan Rather’s new book, “What Unites Us,” and “The Complete Works of Poetry” by Maya Angelou.

And I can already tell it is going to be another great year of reading.

Happy reading to you.