CLYDE, Missouri, Jan. 25, 2018 — Anna Martina Sims Offenburger, my mother, has been dead for nearly 22 years. If she were alive, she’d be turning 111 this week.  But on a stop here this past Saturday, I almost felt like I was holding her hand — when she was 13 years old.  If that’s a little weird, I’ll still own it.

My wife Carla Offenburger and I were traveling through northwest Missouri last weekend, and I knew our route would take us near two places I have long wanted to visit but never had.  The first, the monastery and motherhouse of the Benedictine Sisters of Perpetual Adoration here in tiny Clyde.  Then we went on a couple miles west to the slightly larger town of Conception and the huge monastery Conception Abbey, home to about 60 Benedictine monks and 80 young men who are studying for the priesthood in the abbey’s seminary.

There is a family connection. 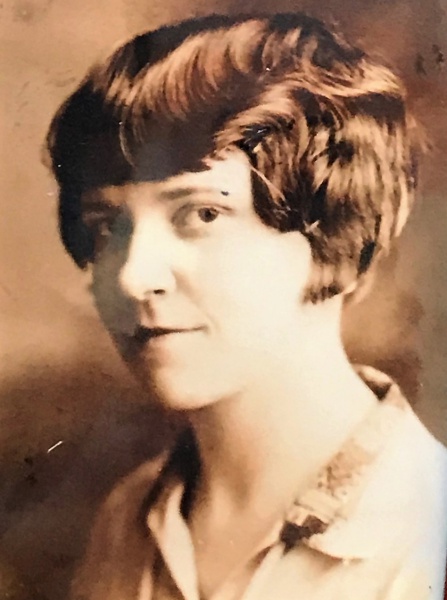 Anna Sims, shown in this photo when she was a high school girl.


In 1920, my grandparents Martin and Mary Ann Sims, who were farming near Imogene in southwest Iowa and were raising five children, decided to send their oldest son John, then 15, and oldest daughter Anna, who was 13, to boarding schools here run by the Benedictines.  John went with the boys at Conception Abbey, and Anna — who eventually became my mother — was with the girls at the academy the Benedictine sisters were running at Clyde.  Those boarding schools lasted into the 1930s, then were discontinued by the Benedictines when public schools in the area became better.

Why would the parents have sent their two oldest 80 miles away to the church boarding schools?

“From what I remember, I don’t think it was a situation where our grandparents were trying to determine if John and Anna possibly had vocations (to become a priest and nun),” my older sister Sue Polk, of Omaha, tells me. “I think it was more a matter that the kids had been going to country school out there between Shenandoah and Imogene, and the parents wanted to give them at least a little exposure to Catholic education.”

Well, it certainly “took.”  Both John and Anna were lifetime faithful Catholics.

Our first cousin Mike O’Brien, of Ogden in central Iowa, said “the way I recall the story, John was very shy as a kid, and Martin felt he would be better off if he knew his sister Anna was just up the road. I recall that even as a man, John was somewhat quiet, but a constant worker.”

John spent just a year at the boys’ school, then finished high school back home.  Mom spent three years with the Benedictine nuns, then returned to spend her senior year at Shenandoah High School and graduate in 1924. 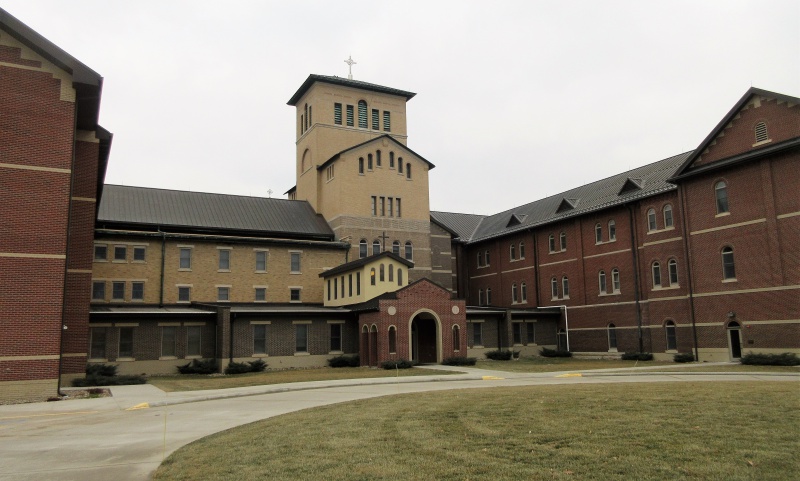 The front view today of the motherhouse and monastery of the Benedictine Sisters of Perpetual Adoration in Clyde, Missouri.

Several things strike me about all this.

It had to be a financial struggle for Martin and Mary Ann.  About five years ago, cousin Mike dropped in on the Benedictines in Clyde, and mentioned that his aunt had attended the boarding school there long ago.  The sisters wrote down her name, Anna Sims, and a couple days later, Mike received a letter from Sister Marietta Crahan, then the archivist for the nuns.  She’d run a records search and confirmed that Anna Sims was a student in the 1920, ’21 and ’22 school years.  The cost?  Sister Crahan reported that financial receipts for the 1921-’22 school year showed Martin Sims had paid $145.89 for Anna’s first semester expenses and $140.66 for the second semester.  That included “room, board, tuition, music lessons and supplies, books, sewing and fancy work items, stationery and postage,” with 86 cents of that for “Misc.”

Those dollar amounts may seem like a bargain now for a year of education, but that was big money back in the early 1920s.

Another thing that amazes me — how’d they get there and return home?

I doubt the Sims family even had an automobile back then.  They were farming with horses, I know that. More likely, John and Anna were riding from Shenandoah to Maryville, Missouri, or possibly on to Conception Junction, on the Wabash Railroad.  If they did that, it must’ve been a thrill for them getting on those trains.

But my biggest wonder is what 13-year-old Anna Sims, a farm girl from southwest Iowa, must have thought the first time the towering wooden doors to the Adoration Chapel inside the sisters’ monastery opened in front of her and she was directed inside it. 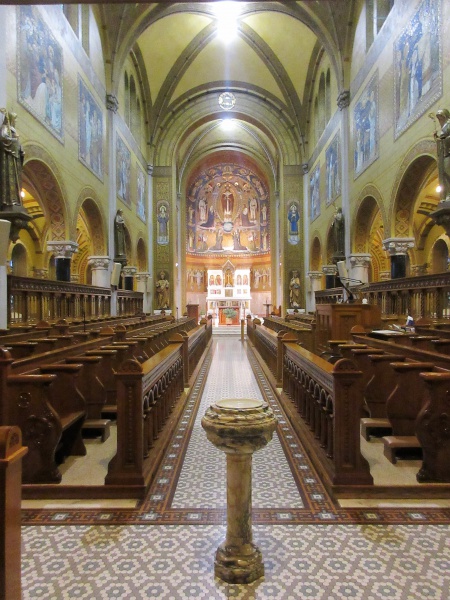 The Adoration Chapel.  It took 10 years to build this Romanesque-style church, and it was consecrated in 1911. It has been in daily use ever since, with the nuns gathering five times a day for services.  It is also used for individual prayer and meditation.  It is like a quiet art museum that features marble, granite, oak, stained glass and some of the finest ceramic-tile pictorial mosaics you’ll ever see anywhere. Craftsmen came from as far as Germany to work on the chapel.

Let me give you the impression of a 70-year-old man viewing the chapel for the first time now in 2018.

Sister Josetta Grant walked Carla and me from the lobby of the monastery around a couple corners, down a hallway and then opened those same tall wooden doors.  She showed us inside the chapel, stepped out, closed the doors and left us standing there alone.  We both gasped.

I’ve been in magnificent churches, of all faiths, around the world. And I will say that this Adoration Chapel in Clyde, Missouri, is one of the most beautiful and inspirational churches I’ve ever seen.

I was so overwhelmed that, yes, I almost felt like I was holding my mother’s hand right then — and she was just a young girl.   I’m sure I was experiencing the same soul-stirring sensation she must’ve had on her first time in that chapel. 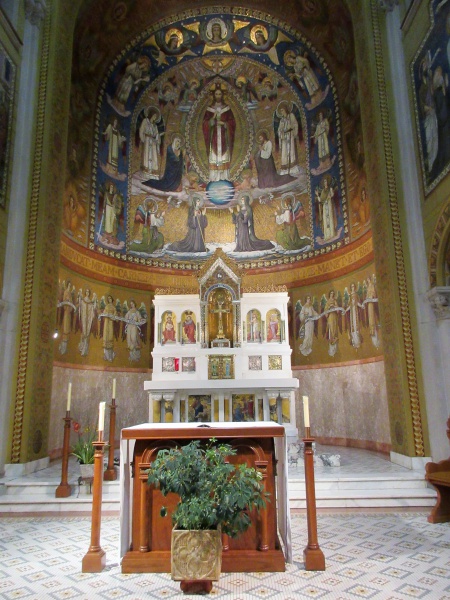 The altar area of the chapel.  The mosaic above the altar is “Christ the Eternal High Priest” and is 25 feet high and 24 feet wide.

You can look at my photos with this column, and perhaps get a good idea how inspiring the worship space is.

Better yet, take the online tour of the chapel that the sisters offer on their internet site, by clicking right here.  And do take time to view their photos.  The website notes that one visitor said that entering the chapel is “like stepping into the vestibule of heaven.”

Best of all, come see the monastery and chapel yourself.

You know, I don’t think my mother ever returned later in life to visit the monastery of the Benedictine Sisters. She probably always thought she was too busy, with family, her jobs and social commitments around Shenandoah.  I’m counting it as one of my worst failures as a son that, at one time or another, I didn’t just go pick her up and drive her back to Clyde.

But maybe she indeed was standing here with Carla and me this past Saturday. 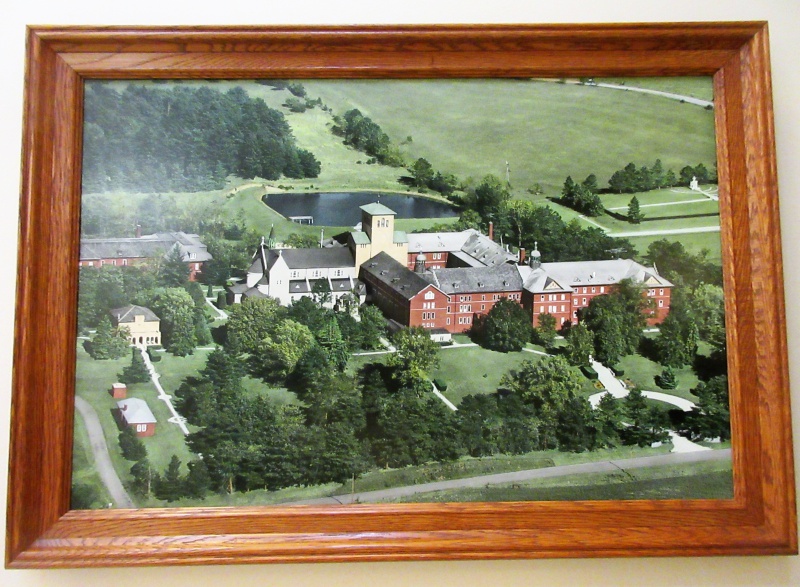 An aerial view of the Benedictine Sisters’ home in Clyde, Missouri, before some recent construction updates. 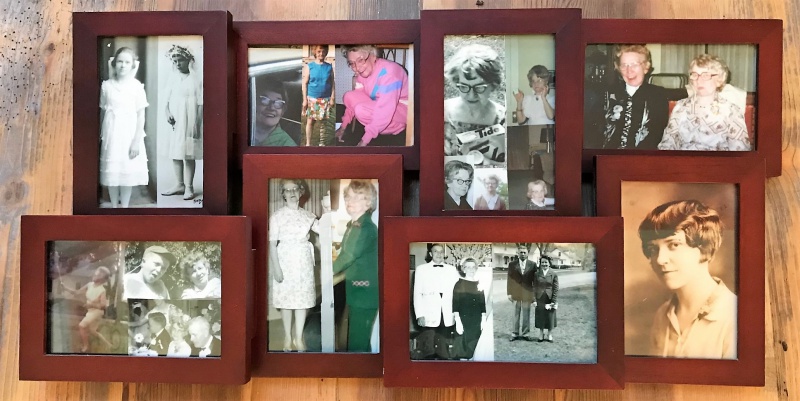 A fun collage of photos portraying the life of Anna Sims Offenburger, who in the early 1920s spent three years at the boarding school the Benedictine Sisters operated. The collage was the work Chris Offenburger Werner, the youngest of Anna’s eight children.