COOPER, Iowa, Feb. 20, 2018 — My cancer journey in 2018 has started off with a whole lot of waiting and a whole lot of fun “busy-ness.” Certainly a day doesn’t go by that I don’t think, pray and worry about the cancer within my abdominal area, liver and lungs, but in general, I’m still trying to live a good, full life – even with cancer’s presence.

I’ve been counting down in a 60-day scan waiting period. At my early January appointment with our oncologist Dr. Matthew Hill, his instructions were to continue doing things on “your want-to-do list and stay healthy.” He went so far as to tell me that if I was getting anxious because no actual treatments were in the works, as we waited for the follow-up scan, to consider travel and fun as my treatment plan.

You may remember that I was going to see a specialist at the University of Nebraska Medical Center in Omaha about a new kind of treatment for the tumors in my abdomen and liver. However, after a telephone consultation, that visit has been postponed until we get the tumors in my lungs under control. My last scan in early January showed the lung tumors to be very small, but they’re still the priority.

Next week, a new scan will guide our discussion about what treatment will be and when it will begin. If the tumors have had little or no growth, we might continue delaying any treatment, because I’m still healthy, showing no symptoms and feeling good. However, if the lung tumors have increased in size significantly, we’ll likely be discussing some kind of chemotherapy. Yes, we know that my adenoid cystic carcinoma doesn’t respond well to chemotherapy, but, honestly, the treatment options will probably dictate that we at least try it.

So anyway, my focus for January and February has been pretty clear. Chuck and I have been walking two miles a day, five or six days a week. I’m eating healthy foods – like plenty of asparagus, nuts, and smoothies filled with fruits and vegetables. And we are chipping away at our “want-to-do list.”
January was filled with little trips that have been on our list for some time.

We have come to realize that much of what we really always want to do can easily get lost in daily living. So we’ve just rearranged our living pattern to make daily living include the things we really want to do. Does that make sense?

It’s sad to think about how much more would be on our “we’ve-experienced-this” list, rather than on our “want-to-do list,” if we’d been living like this throughout our 27 years of marriage. (And that’s my piece of advice for you all – get going! Don’t let daily life get in your way!)

So we started January off with a trip to New Melleray Abbey, the Catholic Trappist monastery near Dubuque, nearly our favorite place on Earth. We took our good friend Mary Riche, of Des Moines, and had a great one-day adventure. We received the anointment for the sick by Father Stephen Verbest and then a nice visit with our dear friend, Father Jim O’Connor, who at the age of 93 still can provide the reassurance that he is always praying for me. Trips to the monastery always brings us peace. I look at the anointment as part of my treatment, too. And it was especially nice to introduce Mary Riche to the entire experience. We also travelled up to Balltown for a late lunch at Breitbach’s Country Dining, Iowa’s oldest restaurant and bar. 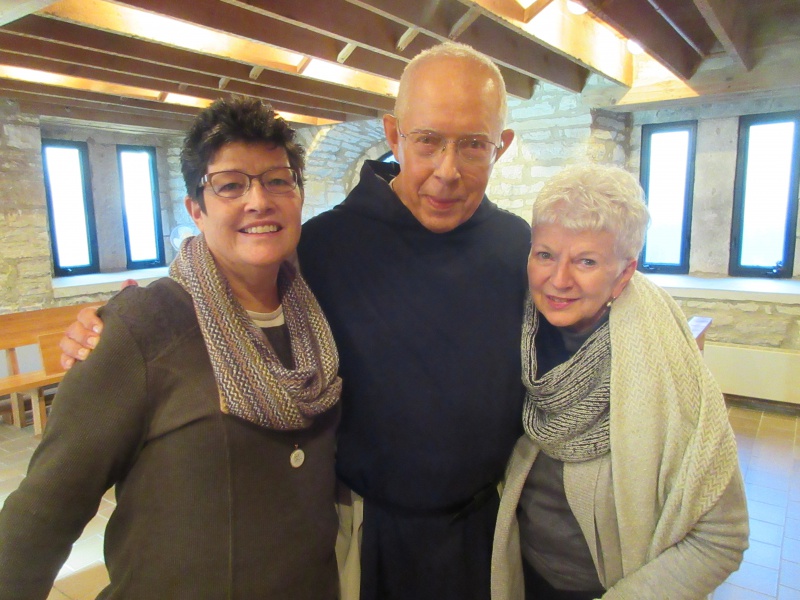 We took another long weekend and travelled to Hamilton, Missouri, (pop. 1,800) so that I could spend some time shopping at all the 14 quilt shops (!) that make up Missouri Star Quilt Company. Oh my!

I’ve been talking about this trip ever since I started quilting. Every Friday morning, I get my Missouri Star Quilt email and watch Jenny Doan’s chatty quilting “tutorial.” The whole concept of Missouri Star Quilt Company has intrigued me, and a trip to Hamilton to see it was everything I wanted it to be.

First, it had been recommended to me by quilting friend and high school classmate, Lori Conrath Thompson, that I go with a good list or plan; have the patterns and colors already in my head, and take plenty of money. She was so right. My goal was material for three quilts, one for each of my granddaughters. I had the patterns and general color themes already picked out. Lucky me, I’m married to a man who enjoyed the experience as much as I did. He also liked the “Man’s Land” shop where he found free wifi, 10 leather recliners and a big screen television.

We had a grand time. We stayed at a lovely B&B, Mari’s House, within walking distance of Hamilton’s main street, which is lined by the 14 Missouri Star Quilt stores. Those shops are all themed by fabric or notions (florals, solids, backing, etc.) and are ready for quilters. And then there’s the retreat center, where we ran into a group from Des Moines, of all places. 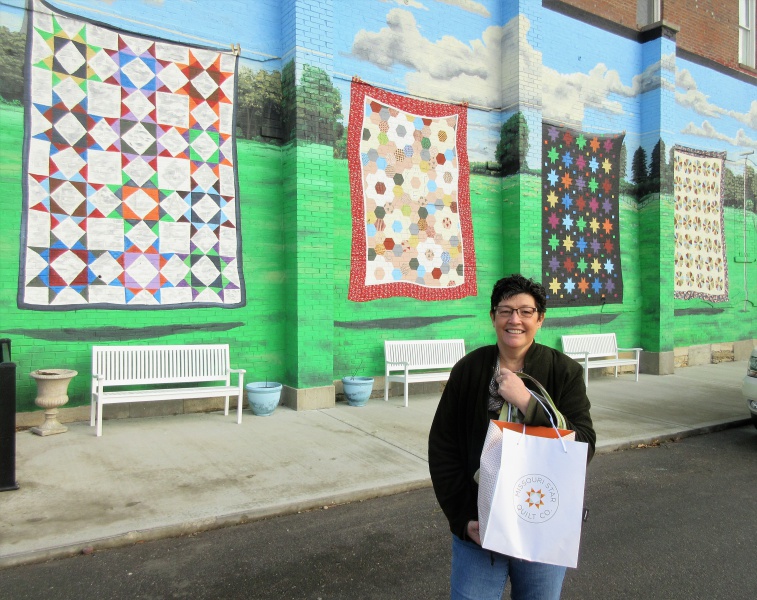 Carla Offenburger with a huge mural of quilts painted on a corner building in uptown Hamilton, Missouri.

The entire place is incredible and hard to fathom. If you are a quilter, plan your trip now.
On the main drag, amongst the quilt shops, there’s a fun coffee shop, a hamburger joint and a fine-dining restaurant, The Blue Sage. We shopped all the shops and ate at all three restaurants.

An added bonus was the local historical museum that has a wonderful display on the life and career of Hamilton’s most famous native citizen, James Cash (J.C.) Penney, the American retail icon.

But back to quilting.

I found everything I was looking for (and more). I spent all the money I budgeted for the quilting supplies — $515. I’ve got everything I need to make three quilts for my granddaughters (Shhhh! That’s a secret!). Making these quilts is part of my treatment plan.

I could write a whole lot more about the Missouri Star Quilt Company and Hamilton, Missouri, but you can check it all out at www.missouriquiltco.com. 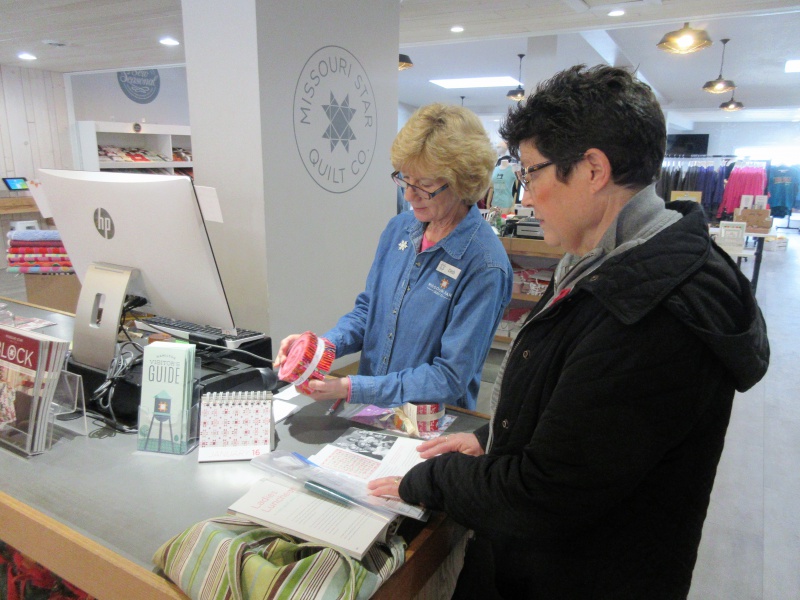 Chuck and I traveled northwest from Hamilton to tiny Clyde, Missouri, to visit for our first time ever the motherhouse of the Benedictine Sisters of Perpetual Adoration. Chuck’s mother, the late Anna Offenburger, attended two years of high school there, oh so long ago. Then we made another stop two miles west at Conception Abbey in Conception Junction. This Benedictine monastery and seminary has also long been on our “let’s-go list.” At Conception Abbey, I bought a plaque that reads, “God’s 3 answers to your prayers: 1) Yes, 2) Not yet, 3) I have something better in mind.” A good reminder for all of us, I think.

We continued our long weekend with an overnight stay in Chuck’s hometown of Shenandoah in southwest Iowa. We had breakfast Sunday morning with nephew John Offenburger, attended mass at St. Mary’s Catholic Church, ate lunch with our 98-year-old pal Evelyn Birkby in nearby Sidney, and attended a reception back in Shenandoah.

January wasn’t over yet!

Our first game was in West Burlington, in southeast Iowa, but on the way we stopped for lunch and touring in Fairfield. Chuck and I love Fairfield and enjoyed sharing our favorite spots with the Lawtons, who had never spent time there. Then it was on east to our Friday night game, to watch Taryn Scheuermann, granddaughter of our Cooper neighbor Marty Scheuermann, play for her Van Buren of Keosauqua team. Now a 6 ft. 3 in. sophomore, Taryn is going to be a player to watch the next few years. We thoroughly enjoyed watching as she and the Warriors got a win against West Burlington. 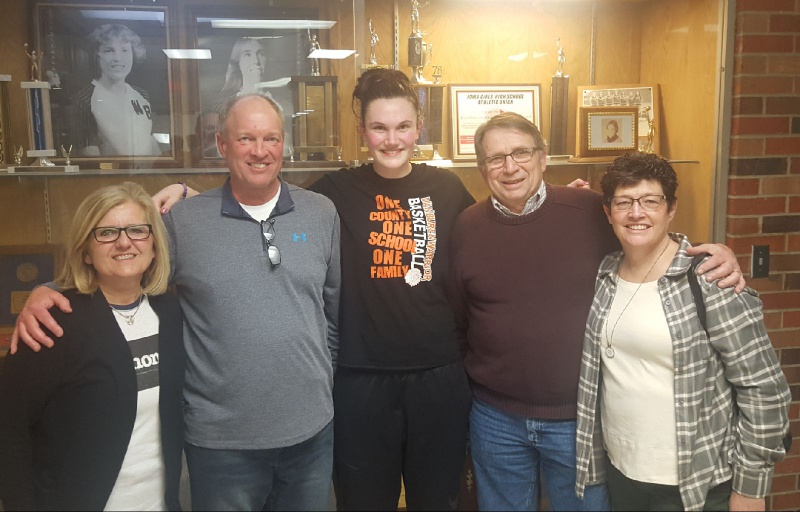 Taryn Scheuermann, star center for the Van Buren High School Warriors of Keosauqua in southeast Iowa, are shown here with the Lawtons and Offenburgers after we cheered Taryn and teammates to victory in West Burlington.

We didn’t stay for the boys game because we wanted to get to historic Nauvoo, Illinois, where we had rooms at The Nauvoo Grand B&B.

Saturday morning, we toured Nauvoo, which for a time in the 19th century was home of the Church of Jesus Christ of Latter-day Saints, and the birthplace of the Reorganized branch of that church.  The Mormon people were there until 1846, when fleeing religious persecution, they headed west to Utah on the great Mormon Trek. Nauvoo is a place Chuck and I have been before, by car and by bicycle, but it was new to the Lawtons and it was fun to introduce them to such a rich historical site.

Then we were on to Quincy, Illinois, for more high school basketball – the first annual “Quincy Shootout,” an amazing invitational that drew 19 teams from schools in eight states for two days of games. We were there specifically to see Muscatine, Iowa, superstar Joe Wieskamp, who has committed to play at the University of Iowa and is as good as we’d heard. The bonus was that we saw a whole lot of other great high school basketball players there, too (and, naturally, many college recruiters).

Of course, all along the way on these road trips, we look for great little shops and wonderful places to eat. Ila’s in Fairfield and “Fatback’s Smokin’ Racks BBQ” in Quincy are well worth checking out.

The travel fun continued in February, when Christian author, blogger and speaker Jen Hatmaker, of Texas, filled the huge Lutheran Church of Hope in West Des Moines for a program. Our group included my sister Chris Woods, friend Mary Riche and two of our ministers from Plymouth United Church of Christ in Des Moines, Rev. Valerie Miller-Coleman and Rev. LeAnn Stubbs. Hatmaker is one of my all-time favorites. In fact, sister Chris and I traveled to Sioux Center in northwest Iowa last fall to see and hear her, and we jumped at the chance to share this Des Moines experience with friends. 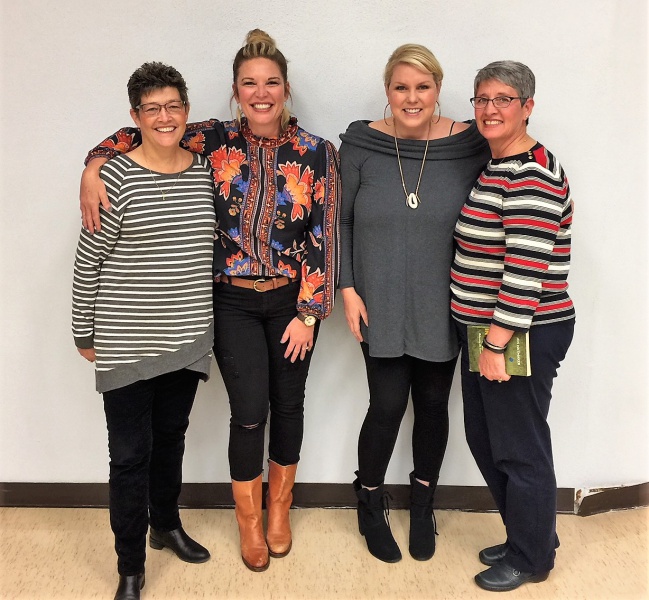 My life is so blessed! I feel truly grateful for all the friends and experiences Chuck and I have.

There will be more on our next adventure.

In early March, we’ll head to Arizona, California and Colorado on a two-week driving (and bicycling) trip.

We will spend time with step-daughter Janae Jaynes-Learned and her husband Chris Learned in Arizona, where we’ll do some Major League Baseball spring training games. Then we’ll head to the Los Angeles area to watch our traveling Vanderbilt University Commodores baseball team in four games – against Long Beach State, Southern California, UCLA and then a finale against visiting TCU, with that game being played at Dodger Stadium. We’ll find some time to visit my friend Becky Karnes Hensley in Palm Desert, and then head to Colorado, via Utah’s Zion National Park. In the Denver area, we’ll have some family time with niece Pam Watson Korbel and her husband Doug Korbel.

But first, we’ll take time for that late February “60-day” scan and meet with Dr. Hill to see what needs to happen next as far as my cancer goes.

I’m always in need and want of your prayers for strength, courage, health and healing. Prayers for safe travels would be good, too.