JEFFERSON, Iowa, Jan. 7, 2015 — They graduated from our local high schools in 1959, the same year Democratic presidential candidate Bernie Sanders graduated from James Madison High School in New York City. What do they think of somebody their age now — Sanders is 74 — running for president of the U.S.?

Earlier this week, I put out a call for some Class of ’59ers to come together in an informal “caucus,” to consider that question and other ones.  And Wednesday morning, five of them joined me for coffee and pie at the Uptown Café just off the courthouse square here in Jefferson, our county seat town of 4,500 in west central Iowa.

From old Jefferson High School, we had Rick Morain, retired editor & publisher of our newspaper and still a columnist, and Larry Teeples, retired from Jefferson Telecom and still serving on the Jefferson City Council.  From old Grand Junction High School, we had Claudia Leonard Light, retired after running a daycare for years; Rhea Allen Hoskins, retired after a career farming with her late husband, and Gerry Herrick, semi-retired from farming and just replaced as mayor of Grand Junction after he served “probably 35 years” in city government. 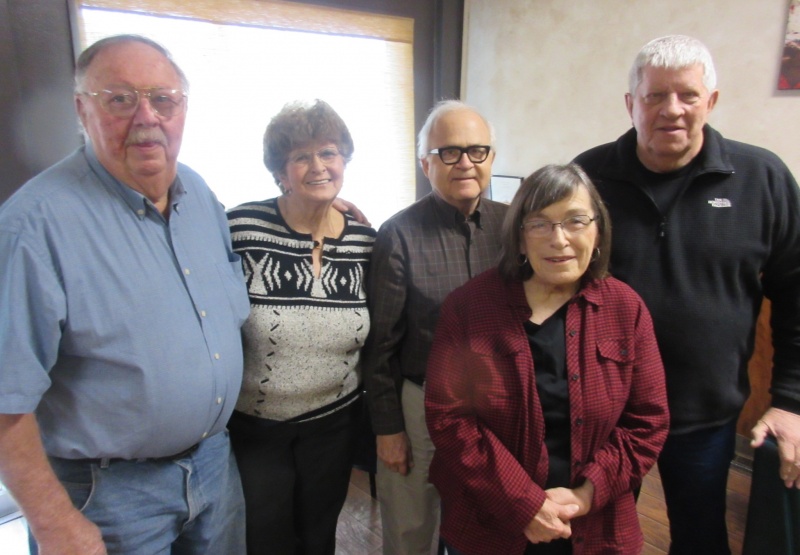 As is usually the case at our Iowa Caucuses, this one was really fun.

And I knew it was going to be fun when I heard the answer to my first question: So, what was it like if you graduated from high school in 1959?

“It was almost like ‘Happy Days’,” said Herrick, mentioning a favorite old TV show that is probably still in re-runs somewhere. “It really was.”

And Light recalled right away, “Gerry Herrick, you were my first date.  That was actually in junior high, and it was some kind of dance.  I know you had to walk me there because we weren’t old enough to drive yet.”

Herrick said he “can remember that like it was yesterday.  I don’t know what the event was but I know we had to get all dressed up, and you wore one of those formals.  You were pretty well-endowed then, Claudia, and I was supposed to be pinning a corsage on you.  I looked down at that, got all nervous and just couldn’t do it. Your mother had to pin the flower on you. I still had a lot to learn back then.”

THE EARLIEST ROCKERS — AND I’M NOT REFERRING TO ROCKING CHAIRS. Think about this: Yes, these five people, the rest of their classmates and Bernie Sanders were born just before World War II started.  And of course they look like grandparents now.

But they are also America’s first generation of rock ‘n’ rollers.  They were the teenagers when rock exploded on the music scene in the mid to late 1950s. “Elvis, the Platters, Buddy Holly,” said Morain. “Rock ‘n’ roll was big-time stuff.”

They all mourned the deaths in February, 1959, of Holly, Ritchie Valens and “The Big Bopper” J.P. Richardson in a plane crash after they’d performed at a “Winter Dance Party” at the Surf Ballroom in Clear Lake.

“Rollerskating was big, too,” said Teeples. There were at least three indoor skating rinks in the county.

“And there was a lot of drag racing,” Light said.

In Jefferson, the high school crowd hung out at Louie’s Candy Kitchen, and Teeples also recalled the popularity of chocolate fountain drinks called “Yeast-o’s” at Shuey Drug Store.  In Grand Junction, they hung out at Edna’s Café and also at the Rigaden café, and Hoskins remembers waitressing at both of them.

Drive-in movies in neighboring Perry and Carroll were hot.  “Passion pits,” said Herrick. “That’s what we all called them.”

And back to those teen dances. “If you really wanted to go to the dark side, it was the Starline Ballroom in Carroll,” said Morain.

It was a great time to grow up in small towns in the Midwest, and it probably was in New York City, too.

But things were changing.  It was in 1959 that U.S. Highway 30 was relocated from the main streets of our Greene County towns to a by-pass around them to the north, and the business districts were forever changed.  From ’59 into the early ’60s, the first big wave of school consolidations happened in Iowa, and many small places lost their high schools, and eventually their elementary schools, too.  Yes, these ’59ers graduated in peacetime, but the “Cold War” was escalating. People worried about atomic attacks from the Soviet Union, and many homes and public buildings had areas built, equipped and marked as “bomb shelters.”

All of the above made these folks who and what they are today.

And ol’ Bernie Sanders is one of them.  Sort of.

SHOULD A 74-YEAR-OLD BE RUNNING FOR PRESIDENT? Haven’t we all been at least a little amazed at Sanders campaigning like he has, not only all over Iowa before our Feb. 1 caucuses, but all over America?

Forget for the moment here what his rather peculiar political positions are.  Just consider the rigors of constantly being on the go.  Four or five stops per day, often delivering energetic speeches an hour or more long, shaking hands with hundreds in the huge crowds he is attracting, enduring press conferences, all the travel.  When you think about it, it’s astonishing a candidate of any age can do that, but especially so a septuagenarian.  If Sanders is elected president, he will be the oldest person ever to be sworn into the office. 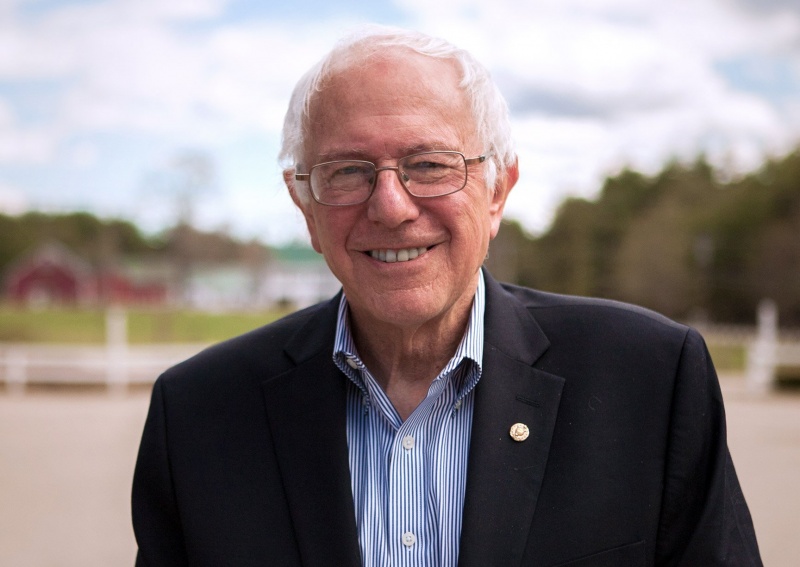 You probably know that Sanders was the very popular mayor of Burlington, Vermont; then served 16 years in the U.S. House of Representatives, and is now in his second term as a U.S. Senator.

Last May, just as he was fully launching his presidential campaign, Sanders told the New York Times that when he started seeing his age being published in stories about him, “I had forgot about that, my age.  I don’t know how people my age feel about it.  I’ve been blessed and very lucky with good health,” pausing to knock on a table, then continuing. “It’s funny, I go to senior groups and I look at them and think, ‘God, we’ve got to help the seniors.’ And the truth is, half the people in the room are younger than me.”

There’s your invitation, I said to my caucus of ’59ers: The man himself wants to know what you think about him running at your age?

“I think with Bernie, age isn’t a problem,” said Morain. “If a candidate can go out on the campaign trail like he has, and maintain the pace that he has, I think it’s O.K.  I think that demonstrates that he is up to the job.”

Hoskins said Sanders’ candidacy “may keep him younger.  I could never do it myself, because I’ve had back problems and a few other health issues. But his health is apparently good.”  Others nodded and talked about joint replacements and bouts of cancer.

And yet, Teeples said he doesn’t think “that age anymore is such a factor” in what people do as they get older.  “The key to it is if you keep your mind active and keep busy. If you do that, you can do a lot.”

Herrick agreed.  “If you truly feel connected to something — really interested in it — then age doesn’t matter,” he said. “That’s kind of how it has been for me with city government and other projects in our community.  If you feel like you’re getting some good things done, then you’re looking around and saying, ‘What else can I do to make things better?’ That keeps you going.  Yeah, you get to where you might have some physical problems that keep you from doing a few things.  But, heck, look at all that FDR did (President Franklin Delano Roosevelt), and he was in a wheel chair.”

There is one concern about Sanders’ age that all in our group share.  It came up when I asked if, because he’s 74 years old like they are, they all want to know whom he’ll pick as his vice-presidential running mate.

“It’s great his health is good right now,” said Light. “But we all know that at this age,  you can have health problems anytime.  Could be a sudden heart attack and…”  Then what? Or who?

YOUNGER PEOPLE MAY LIKE HIM MORE THAN OLDER PEOPLE DO.  There are two other things about Sanders’ campaign, besides his age and energy, that I asked the ’59ers caucus to consider.

First, he’s the most liberal candidate in the race.  In fact, he refers to himself as a “Democratic Socialist,” and says he is leading “a political revolution.”  The polls have him posing a serious challenge to Hillary Clinton in Iowa, New Hampshire and the rest of the nation.  He draws huge crowds when he speaks.

But do Sanders’ five “classmates” I was talking to detect a real following for him? “Not around here,” said Morain.

It was at this point I asked them whom they’re backing, as of now, and told them it was fine if they didn’t want to answer.  My hunch is that the five pretty well span the political spectrum.

Morain said he supports Clinton, but that he is a registered “No Party” voter so he is not going to caucus for her. Teeples, Hoskins and Light all said they are undecided as of now. “I’m undecided, too,” said Herrick, “but if I had to decide right now, I probably would go with Bernie.”

The other point I asked them about is Sanders’ clearly strong appeal to younger voters, from college students on up.  Why is that happening?

“I think it’s because he’s talking about creating new jobs, better jobs,” Teeples said. “Think back to our vote here a year or so ago in favor of building the new casino here.  That was all about making new jobs available here, and we had lots of young people who voted for the first time in their lives.”

Hoskins said she thinks younger people look at Sanders and see “a grandfather figure” they like, someone with confidence.  “And for the college kids, this election is coming at a time in their lives when they’re first learning about politics, and they’re excited about it,” she said. “Bernie gets them excited when he speaks, too.”

Light said she’s glad to see somebody who is getting younger people excited about politics and public life. “At that age, it seems like you get so tied up in life with work and raising kids, some of them don’t pay as much attention to politics as they should,” she said.

Herrick said “it’s that Bernie is old enough to have some common sense, and it seems like we don’t have a lot of that.  That appeals to everybody.”

And Morain said Sanders “is the candidate who hits hardest at Wall Street scandals, shady corporations, wealthy people who are sheltering money from taxes, and all that.  Young people are the ones who are having taxes taken directly out of their paychecks every payday, and they get upset when they’re hearing about people not paying taxes.”

That’s all good thinking, and sound political analysis, and I appreciate our local ’59ers sharing it.  These people from “Happy Days” turned out O.K., you know?