JEFFERSON, Iowa, Dec. 31, 2015 — My presidential candidate Martin O’Malley, the Democratic former governor of Maryland and mayor of Baltimore, came to Greene County on a cold, snowy evening this week and attracted a crowd of about 60 people. Which is very good for here.  But I’m still a little grumpy about his campaign.

As I’ve said repeatedly — and publicly — here are the most important numbers in this Democratic race: 52, 68 and 74.  Those are the respective ages of O’Malley, former U.S. Senator from New York Hillary Clinton, and current U.S. Senator Bernie Sanders from Vermont.

Here are a couple more important numbers: 10 and 33.  The 10 is percent, which O’Malley said he is now polling, having finally reached double figures in Iowa after his long-running campaign that frankly just hasn’t generated enough buzz — despite how much I like the guy and his politics.  The 33 is the number of days left until the Iowa Caucuses happen on Feb. 1. 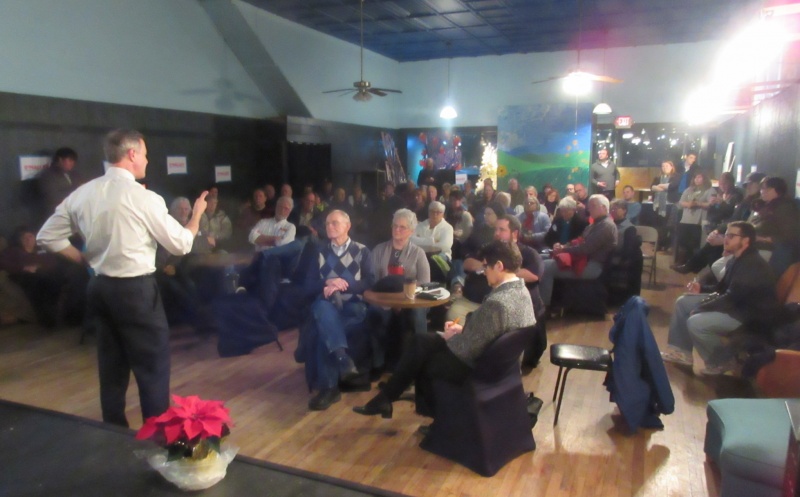 O’Malley drew a good crowd in Jefferson the evening of Tuesday, Dec. 29.

So, can Martin O’Malley possibly still come out of Iowa a winner?

Yes, he can be a winner, although probably not the winner.

What he has to do is amp up his campaign, possibly with a couple ideas I’ll offer here, and become the candidate who out-performs expectations in the caucuses.  If he can do that, he’ll not only be the darling of the media for a few weeks here, he’ll also get a big lift to carry the campaign on to New Hampshire, South Carolina and the other early states in the presidential nomination derby.

Younger Iowa voters are going to be the key.

But O’Malley hasn’t sold himself hard enough yet as the best candidate for this new era.

I asked him about this when he was here in Jefferson, and he answered very diplomatically.

“In every generation, we are well-served by bringing forward new leadership and new thinking about our problems,” he said.  “I was born the year that President Kennedy was killed, so my primary experience is not from the Cold War era. My thinking gravitates more toward a very entrepreneurial approach. In fact, that is the new way of governing. The place for the effective and modern leader is in the center of a group of smart, qualified people working in collaboration on an emerging truth. It’s not trying to dictate from on high.”

I think he’s got to make it plainer.

He’s being too kind toward Clinton and Sanders. He really should be thumping the Clintons (note the plural) as “so last century” and adding that Sanders’ time was “sometime before that.”  He should start using a line that, “Look, this is not the time for your grandparents to be running for president!” 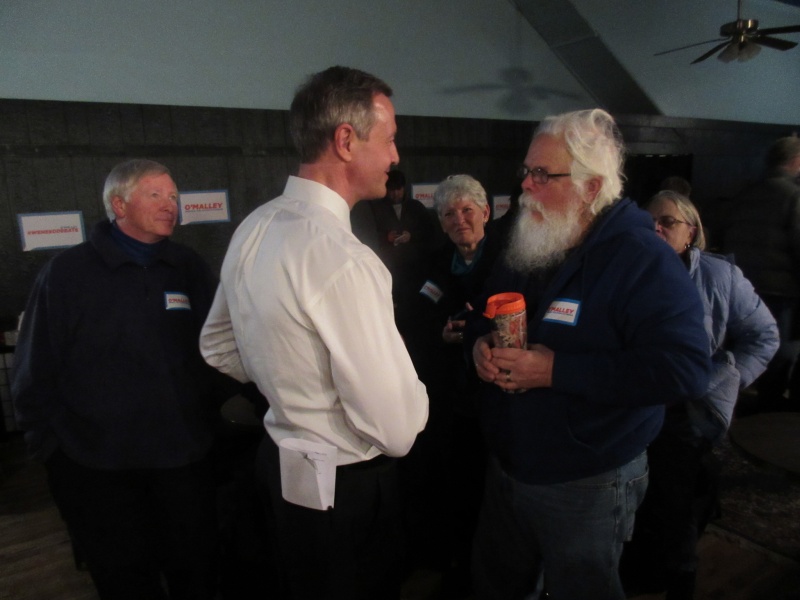 I think there’s still time for him to “catch fire late.”  The other night here, he said that was the advice he has received from some candidate in an earlier presidential cycle on how to be successful in Iowa: “You do three things: 1) organize, 2) organize and 3) catch fire late.”

I don’t think there are a lot of young Iowa voters in the Clinton camp.   Of course, she early-on locked-in support from the older Democratic establishment – and she’s going to hold on to most of that.  I’m pretty sure she is going to win the Iowa Caucuses, but I can see her under-performing on caucus night.

Where I think O’Malley can really score is with younger voters who flocked to the Sanders campaign through the summer and fall.  They were really excited about Sanders – his bold messages, his daring manner, his appealing quirkiness.

My own observation is that the younger people are now wearing out on that with Sanders.  He’s now becoming old stuff, and I do mean “old.”  He indeed sounds like an old socialist ranting on about plans and proposals that — when you step back and analyze them — just are not going to happen.

And THAT is O’Malley’s real opportunity in the next 33 days.

The other night here, he told the audience about his wife Katie, a judge in Baltimore City District Court, and he mentioned the ages of their four kids: daughters 24 and 23, sons 18 and 13.  He needs to bring all of them to Iowa for the next month, and have them working the crowd at every stop.

That would not only make his campaign more fun and more lively, it would also emphasize that he is indeed the new era candidate.

Thinking about that has reminded me of when then-young Tom Vilsack was first running for governor of Iowa back in the last century.  He asked me to be his campaign press secretary, and I declined.  I told him I’d be too much of a pain in the ass on his campaign staff.  Besides, I said, I can tell you in the next 15 seconds the most valuable input I’d ever come up with, then we could just say goodbye and he wouldn’t have to put up with me. O.K., he said, what’s that input? What’s your advice?

I told him that his wife Christie Vilsack and their two high school-aged sons (then) were such good-looking and fun people, that what Tom needed to do was to take them all around the state with him, put them right out in front of himself wherever they went, and just keep saying, “I’m with them!”

Worked out pretty well, didn’t it?

Martin O’Malley should do that same thing here now.

I know I’m going to be getting chewed on by Clinton and Sanders supporters — and maybe even O’Malley supporters — for my grumpiness on all this.  But this is how we 68-year-old people are.  And 74-year-old people can be even worse.  We’re too damned old for you to be electing us to any office, especially the presidency of our blessed nation. 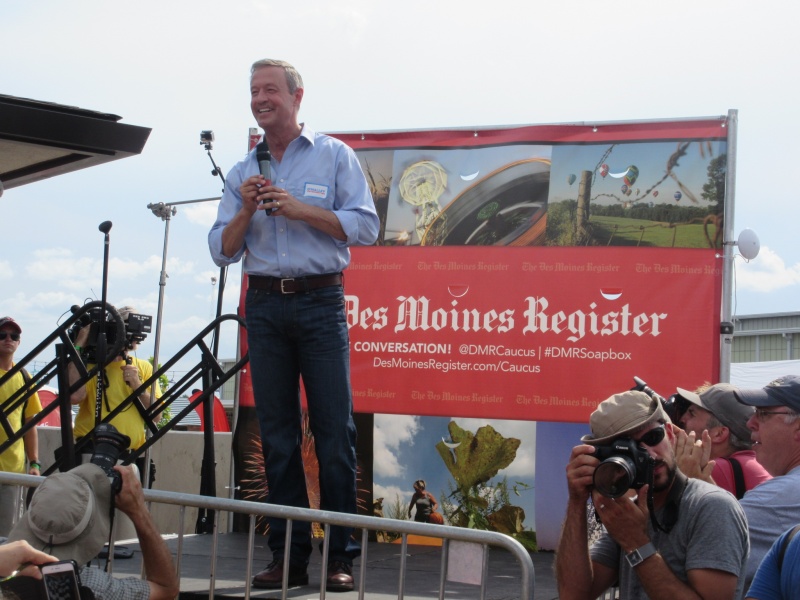