COOPER, Iowa, Jan. 13, 2004 — Sports, for as fun as they are, can sure break your heart, if you let them.  My Vanderbilt Commodores had a terrific football season, then won their bowl game Jan. 4.  We got to enjoy it about 10 minutes, and then the asses at Penn State stole our coach, James Franklin.  I’ve been pouting about it for several days now.

Most of last week, Franklin was saying that he was “committed” to Vanderbilt football, giving everybody the “VU” hand sign and urging us to (in a cheer he invented for us) “Anchor down!”  But Friday night, he told our Vice-Chancellor and Athletic Director David Williams that he was accepting the Penn State offer, Saturday morning Franklin met with our team in Nashville to inform them, then he flew off to State College, Pa., where by mid-afternoon, he was doing their cheer, “We are! Penn State!” 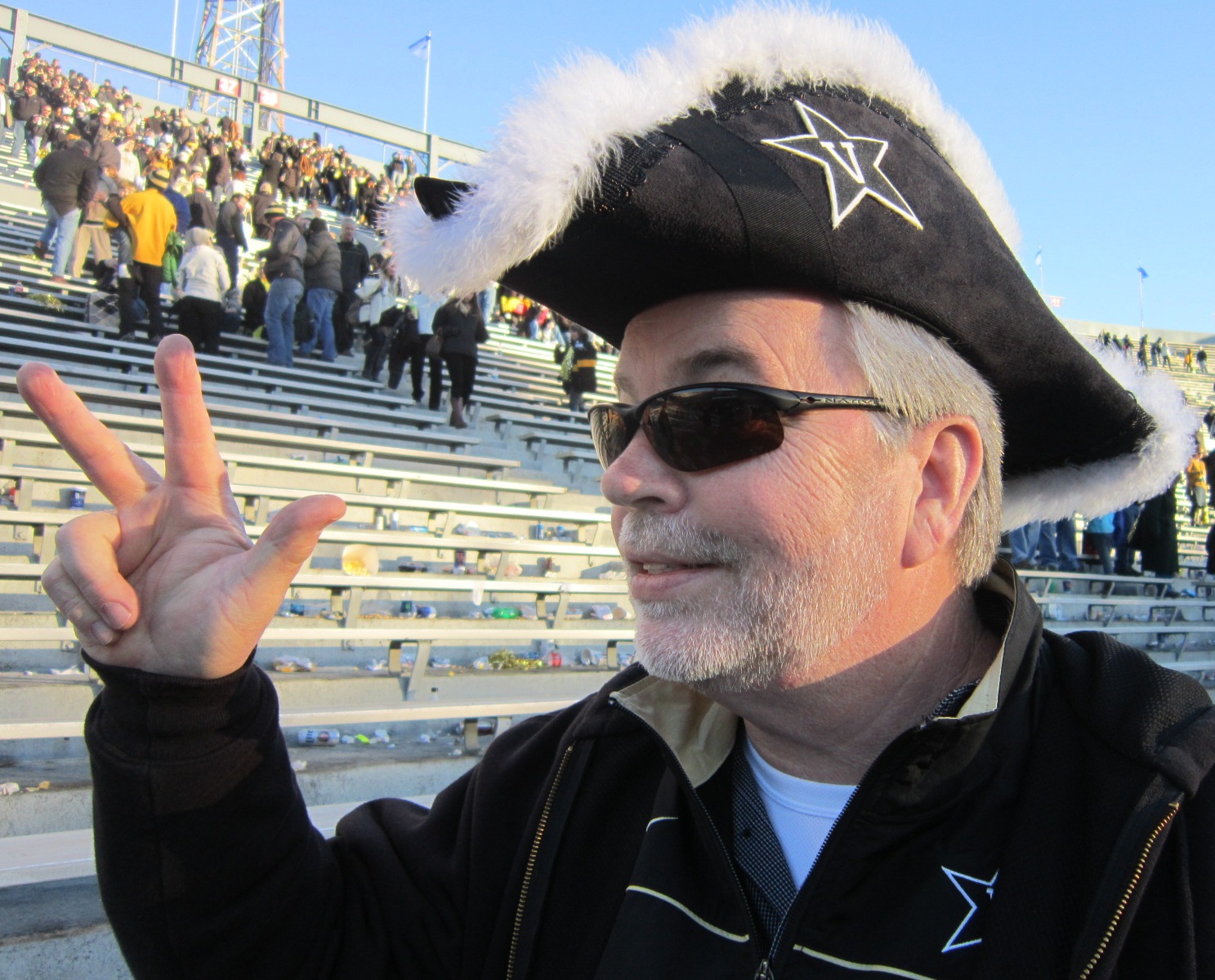 A happy Vanderbilt Commodore fan after the bowl victory. 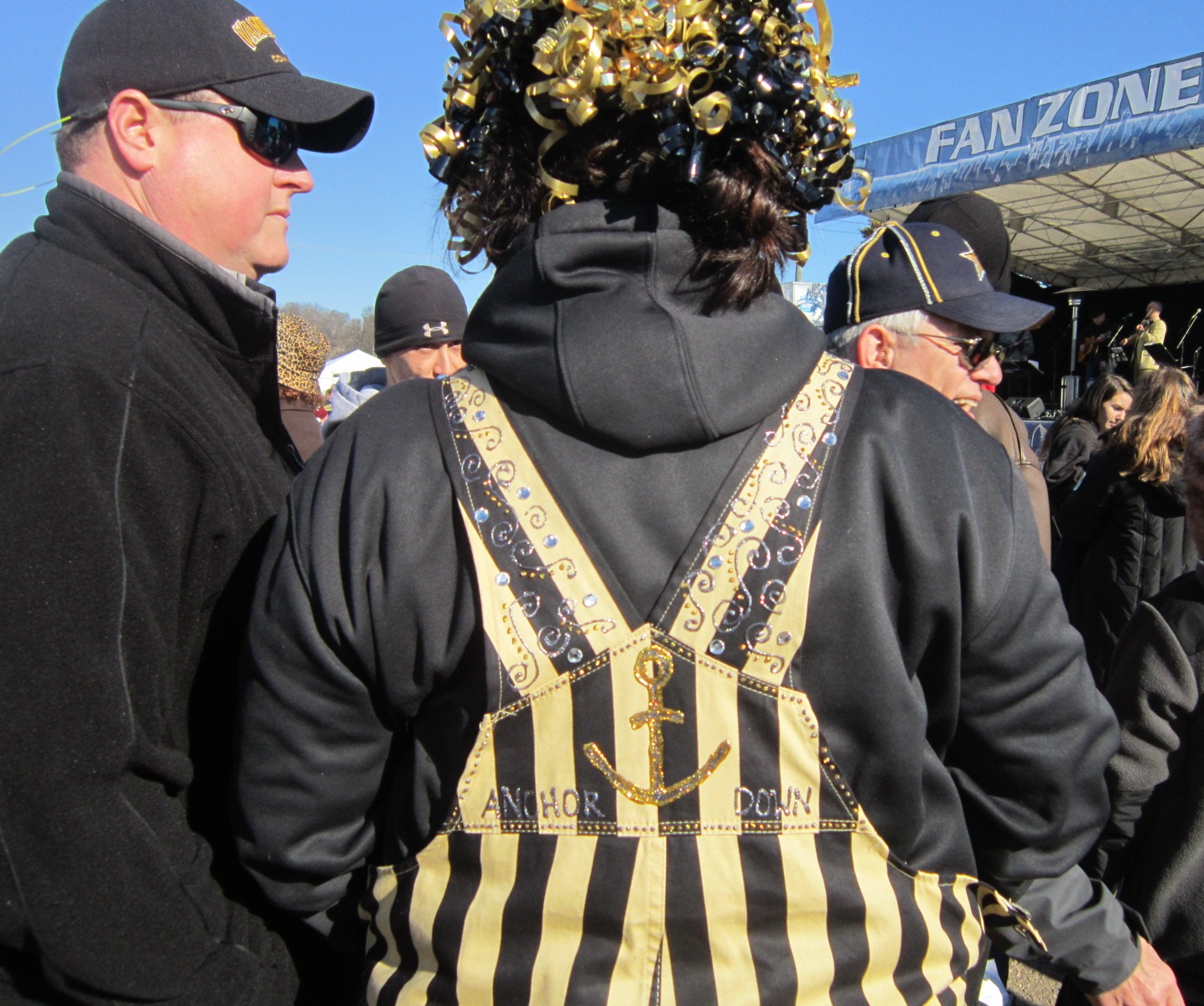 It’s amazing what crazy get-ups in black and gold that Commodore fans come up with for games, now that pride has been restored and new fans have been wooed.

Of course, this all makes sense for a couple of reasons.

First, Franklin, 41, is a Pennsylvania native (the Philadelphia suburb of Langhorne), did his undergraduate studies and played football at East Stroudsburg University of Pennsylvania, was an assistant coach there briefly, and now says that becoming head coach of the Penn State Nittany Lions has always been his “dream job.” He’d like to be the champion who leads the home state university back to respectability and football glory from the scandalous mess that exploded in 2011 after the former assistant coach Jerry Sandusky was convicted and imprisoned for sexually molesting young boys.  That toppled the university president, athletic director and even legendary head football coach Joe Paterno.  The coach who took over, Bill O’Brien, left PSU two weeks ago to become the coach of the Houston Texans in pro football.

The second reason this all makes sense is that James Franklin had become one of the great success stories in college football with the way he resurrected the Vandy program, which had generally been the dormat of the Southeastern Conference   In his three years, the Commodores became very respectable, with a 24-15 record (9-4 in both 2012 and this past season), three consecutive bowl games (victories in the last two), and “changing the culture” of VU football, as he talked so much about doing.  Good, smart football players across the nation suddenly were wanting to come play for Vanderbilt, to become part of the contagious success story, and to have a chance at the fine education that the small liberal arts university gives to its students.  Franklin became a target of many searches for coaches at other schools across the country — including some of the well-known football factories like Texas, USC and Penn State.

So now he’s gone.  It’s been reported that PSU has given him a six-year contract at $4.5 million a year, for a total of $27 million — not that coaching contracts mean a damned thing.  It’s also been reported that Vanderbilt was prepared to counter-offer with a 10-year contract totaling $50 million, which, if true, means my alma mater has just as little sense as other schools with big-time football programs.  As I said, the figures don’t really matter. In fact, our athletic director Williams said he asked Franklin if financial considerations were swaying his decision, and Franklin said they were not.  With the level of pay they were talking, it’s all Monopoly money, isn’t it? 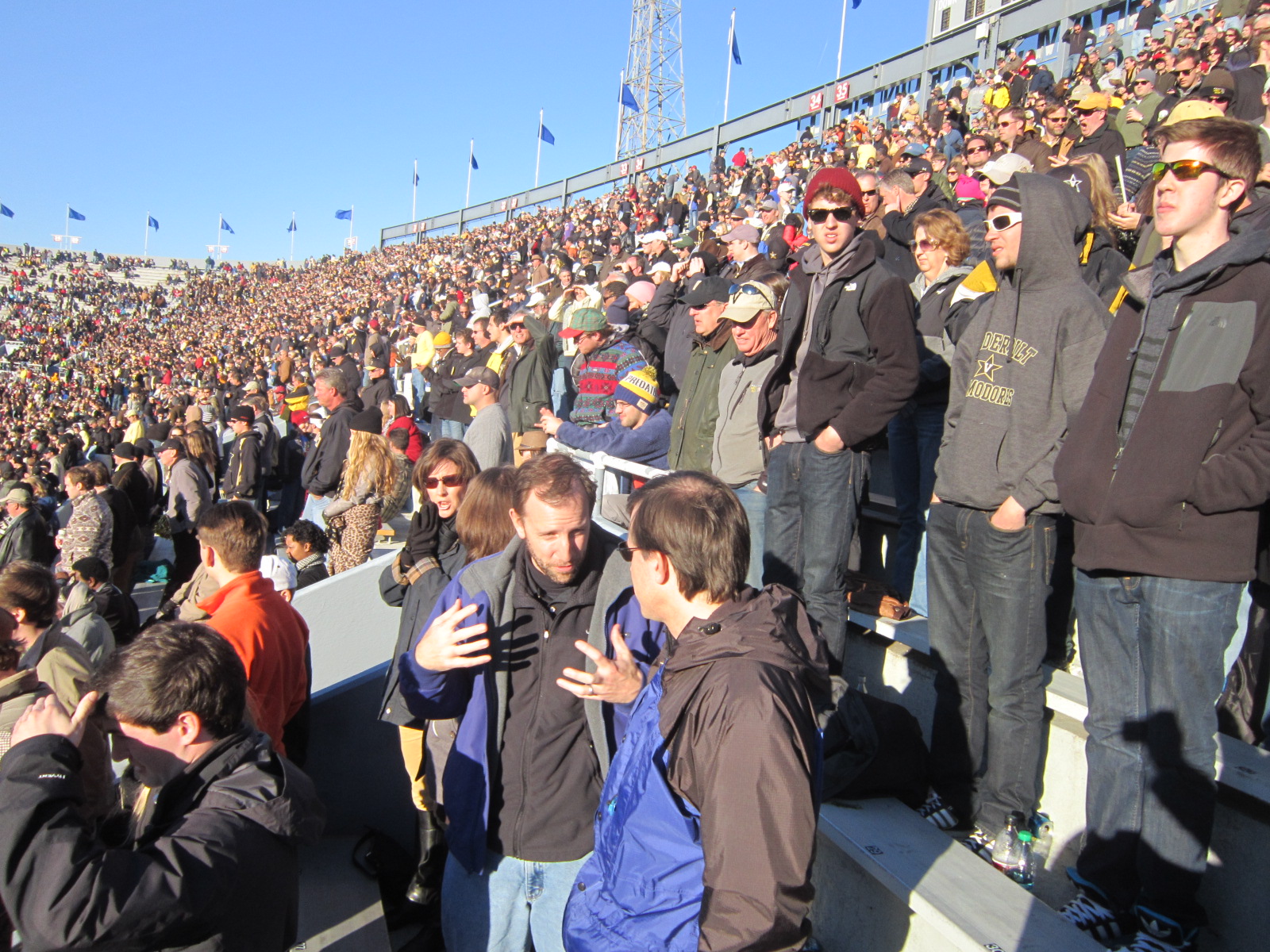 Legion Field in Birmingham seats 71,000 people.  Vanderbilt fans filled up the east half of the stadium, and then some, and the Vandy crowd was estimated to be 35,000 of the total attendance of 42,000 at the BBVA Compass Bowl.  Of course, Vanderbilt is located in Nashville, just a three-hour drive from Birmingham, while fans of the Houston Cougars had a 12-hour drive to get there. 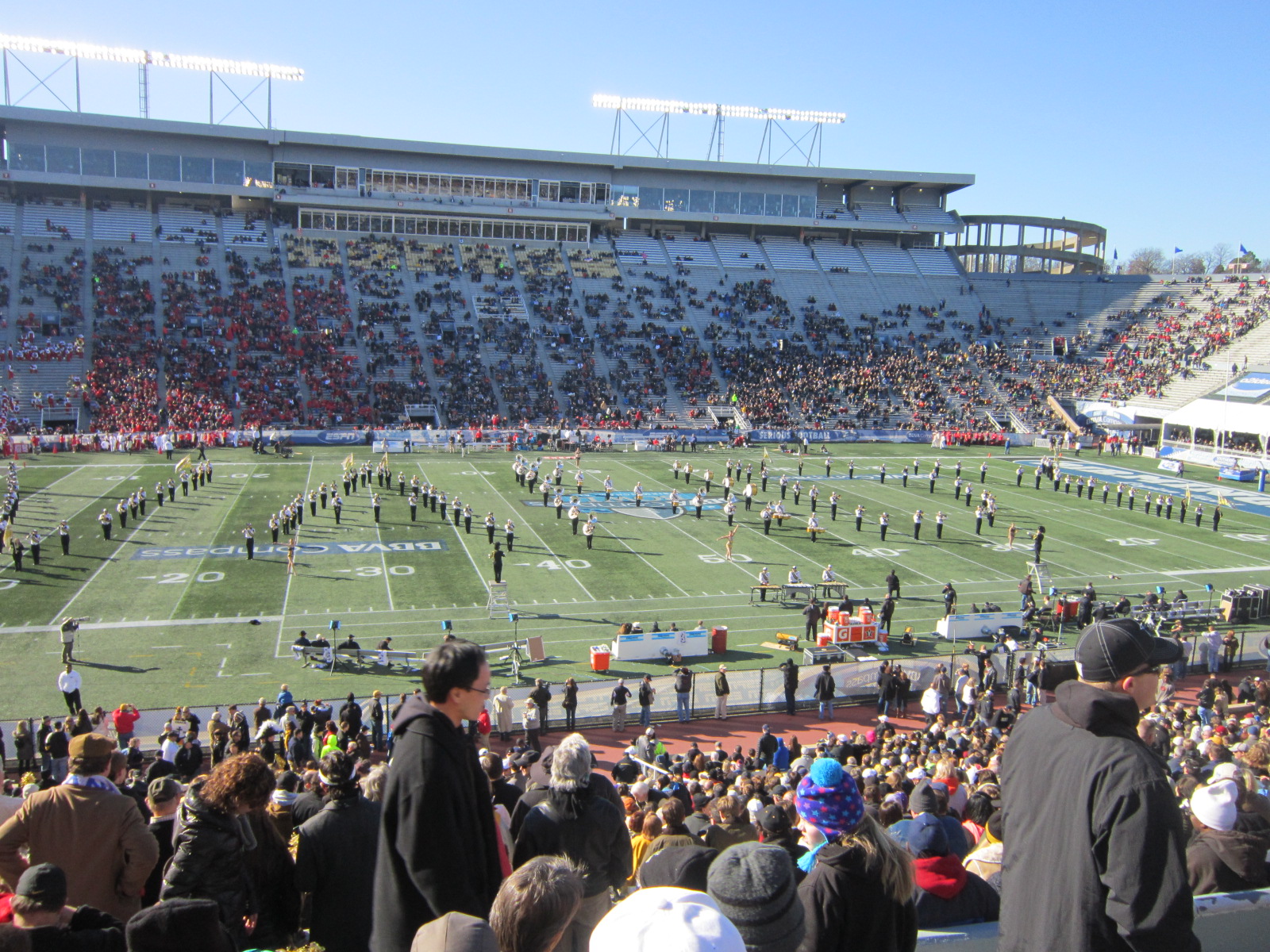 Here’s the Vanderbilt marching band spelling out “Vandy” during their halftime show.

Williams, by the way, is now out talking to prospective head coaches about the Vanderbilt job.  In his news conference Saturday, he said there is a major difference in how this search will go compared to when he was hiring Franklin in late 2010.

“Last time when we did this, quite honestly, we actually had to get on planes and go to a lot of places where people were because it was like `I’ll meet with you if you show up at the Des Moines airport and we’ll meet behind the cookie counter.’ And there were a lot of people that basically said, ‘No I don’t want to talk you’,” he said, certainly catching my attention.  “This time already there is a list of 20-25 people that have reached out to us. At least five of those people are people that we asked to talk to last time that said no.”

(So, personal message here: Vice-Chancellor Williams, if you’re behind the cookie counter at the Des Moines airport again, let me know and I’ll be right down to buy the coffee!)

Meanwhile, let me report that like other times during the James Franklin Era when we’ve made trips to see Vanderbilt play football, Carla and I had a blast in Birmingham, Ala.  We were in the stands when the Commodores beat the University of Houston Cougars 41-24 in the “BBVA Compass Bowl” at historic Legion Field.

You’ll see proof of that in the photos and captions below here. 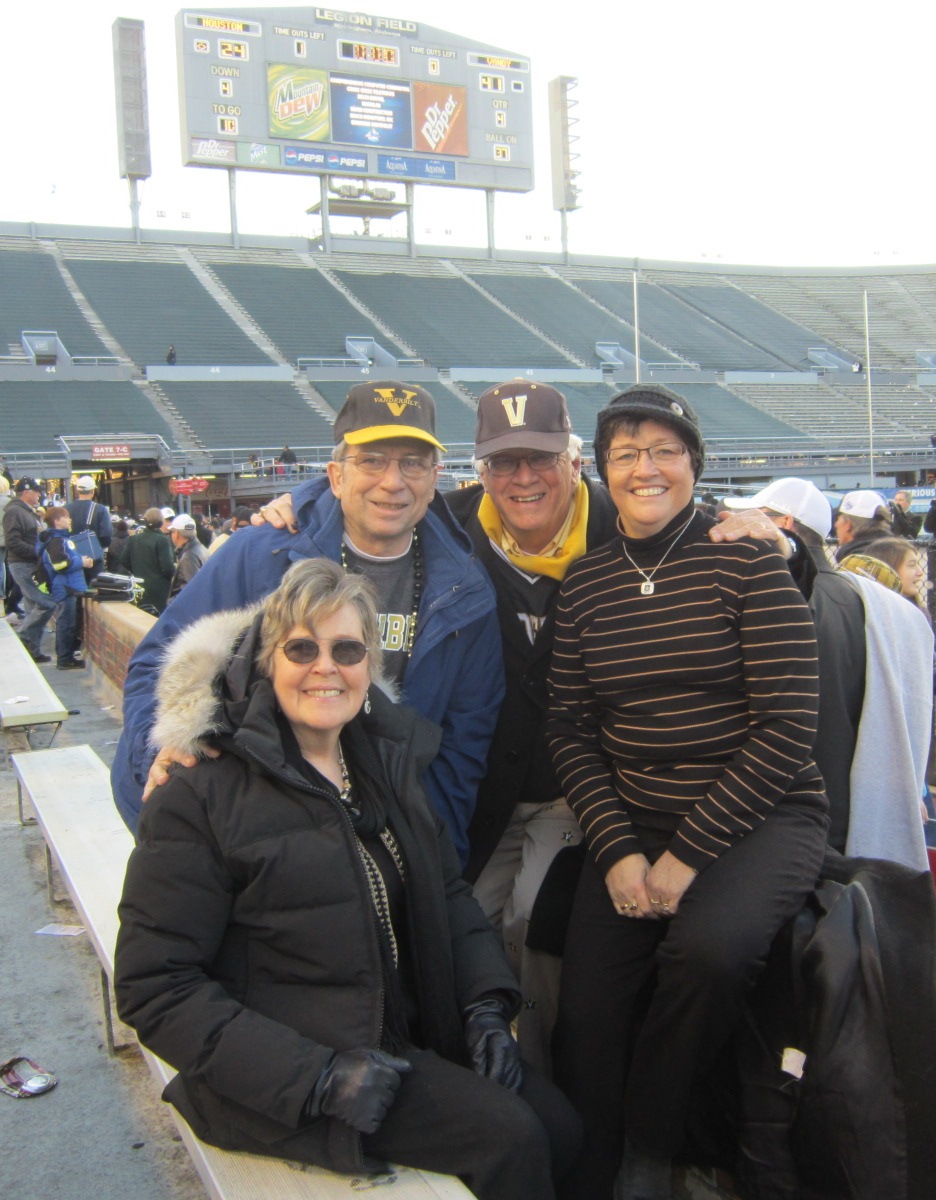 Here we Offenburgers are with our great friends Doug and Molly Bates, of Centerville, Tenn., with the scoreboard of Legion Field in the background showing that Vanderbilt beat Houston 41-24.

I think we discovered a new cheer we Vandy fans can use, to replace “Anchor down,” now that Coach Franklin has gone anchor-up on us.

If you watched the game, which was televised nationally on ESPN, you know that my Commodores started brilliantly and were ahead 24-0 at halftime.  We fans hardly knew how to act.  Then in the third quarter, it was like Houston caught fire and we froze, at the same time.  They scored 24 points to tie it up.  I’m wondering, in hindsight, if Franklin’s head was already in Happy Valley then, instead of on the sidelines at Legion Field.  But he managed to get the ship righted in the fourth quarter.  We scored 17 more points, our defense crushed Houston, and we Vandy fans were delirious.

Carla and I were sitting next to Kevin and Mary Beth Grady, of Atlanta, both of them Vanderbilt graduates, Kevin a classmate of mine.  Kevin has always been a little nerdy, in an academic sort of way.  After his retirement from a top law firm in Atlanta, he started studies for an advanced degree in history, hoping to become a professor.  He’s a man whose mind and wit never rest.

So, anyway, during that third quarter collapse, most of us were sitting in shocked silence — or were yelling in outrage at what we were seeing.

Grady, however, remained the calm Vanderbilt man.  And when we punted the ball away and our defensive team took the field, he raised a rather pathetic-looking fist and yelled, “Be resolute!”

The perfect new cheer for us. 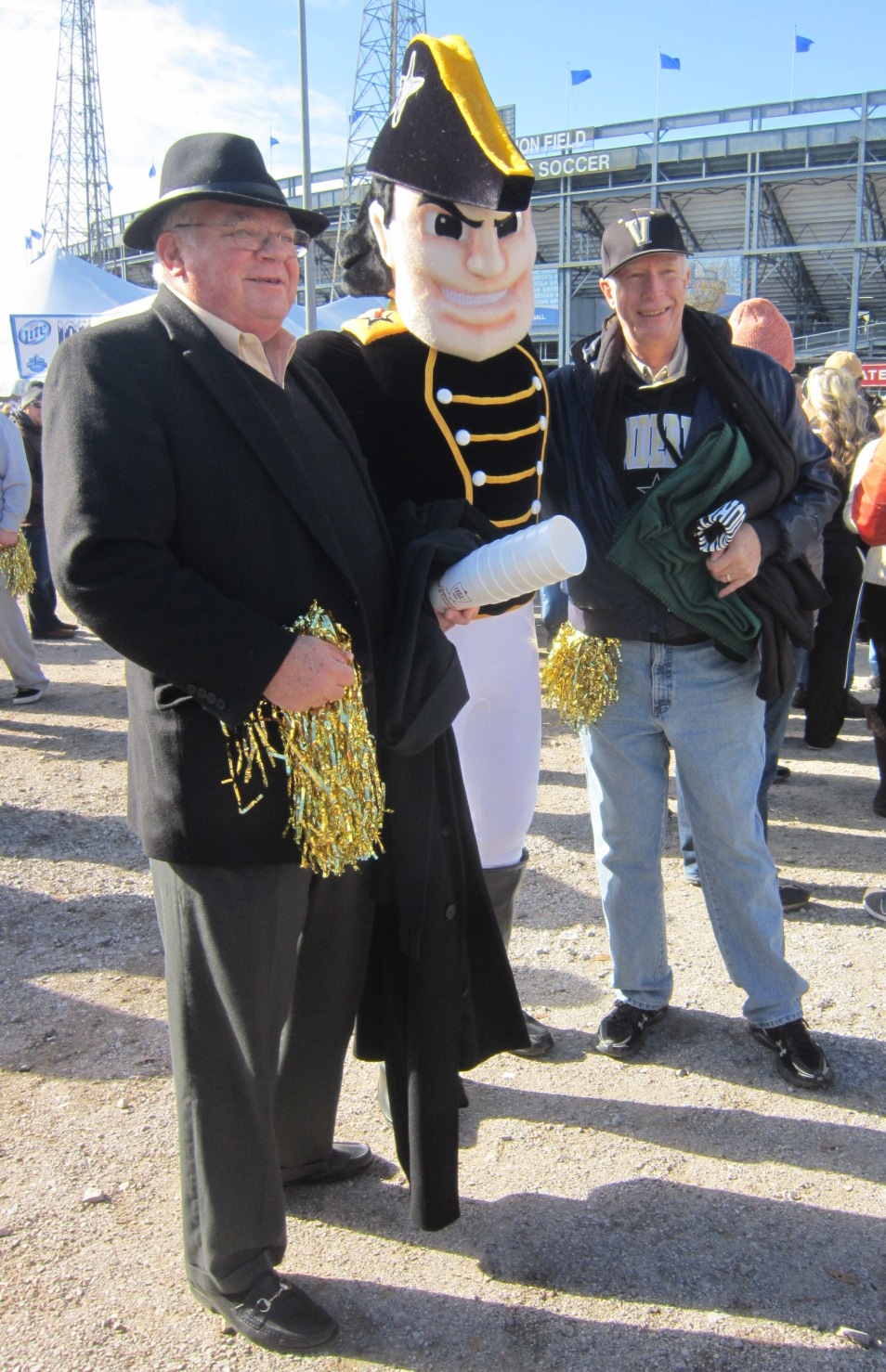 “Mr. Commodore” and a couple of other Vandy fans. 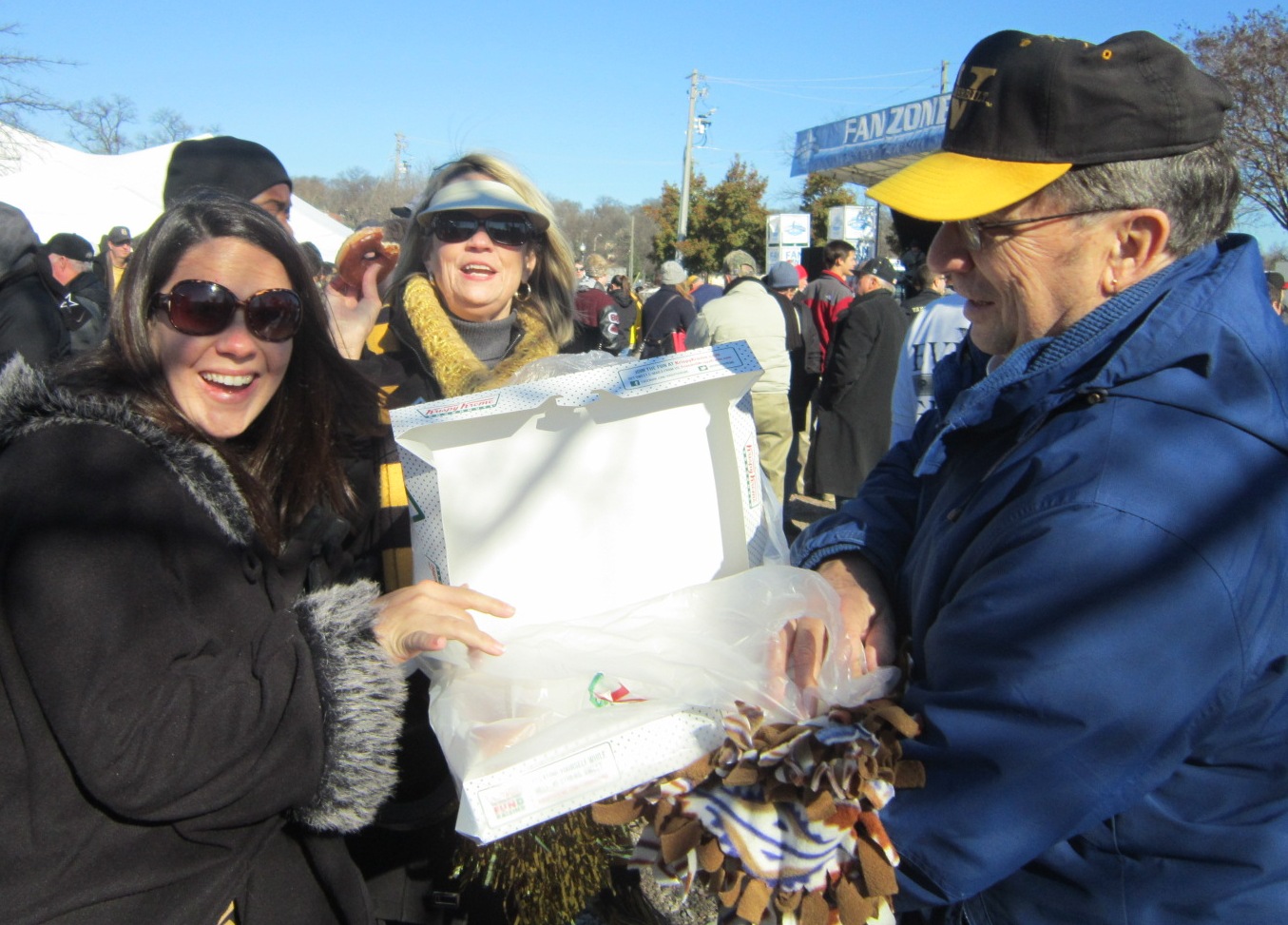 Chuck Offenburger is shown handing out free Krispy Kreme doughnuts to Vanderbilt fans.  One of Chuck’s Vandy classmates Jim Morgan is CEO of Krispy Kremes and sent eight dozen doughnuts for our tailgating. 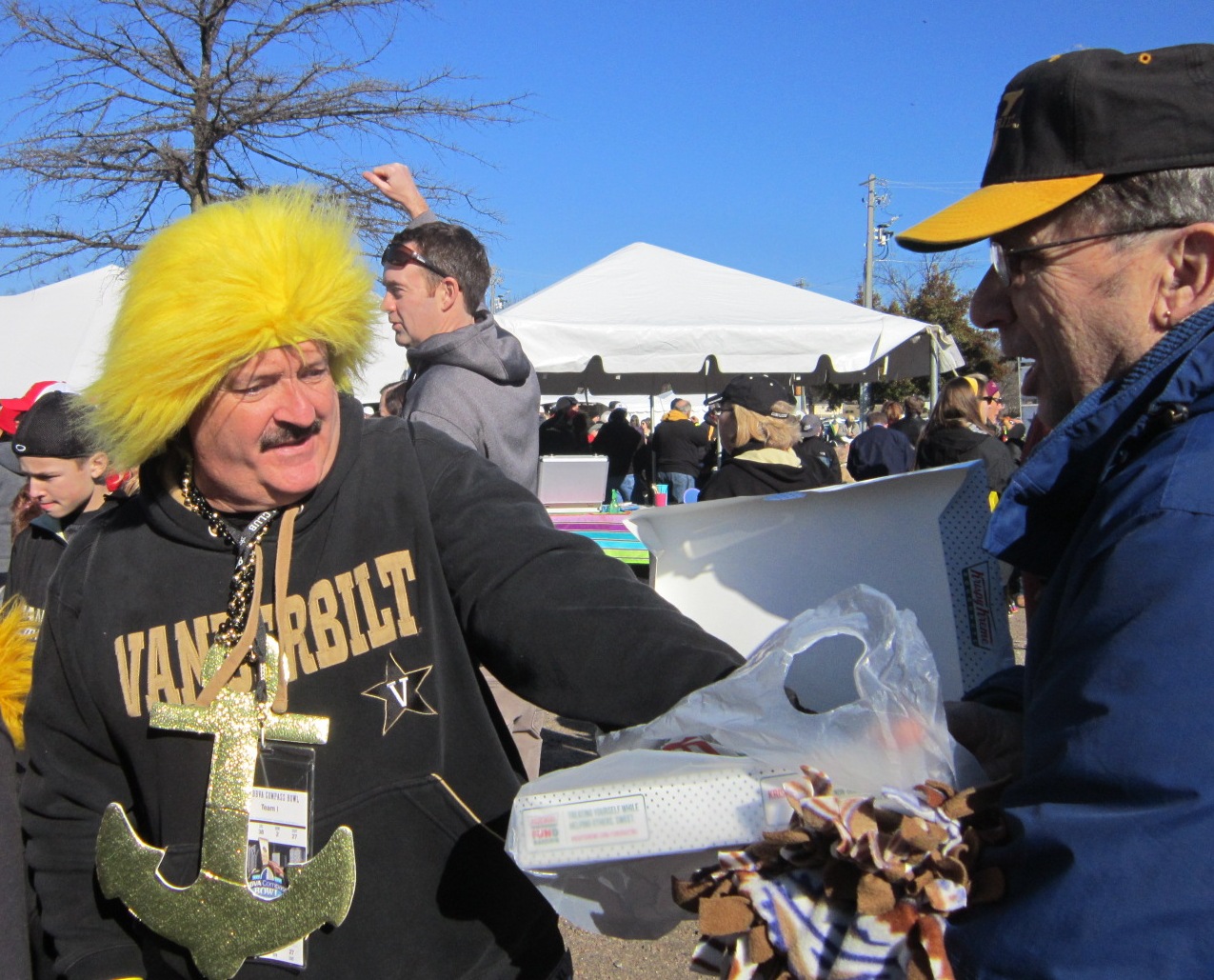 Making another Vandy fan happy with a Krispy Kreme. 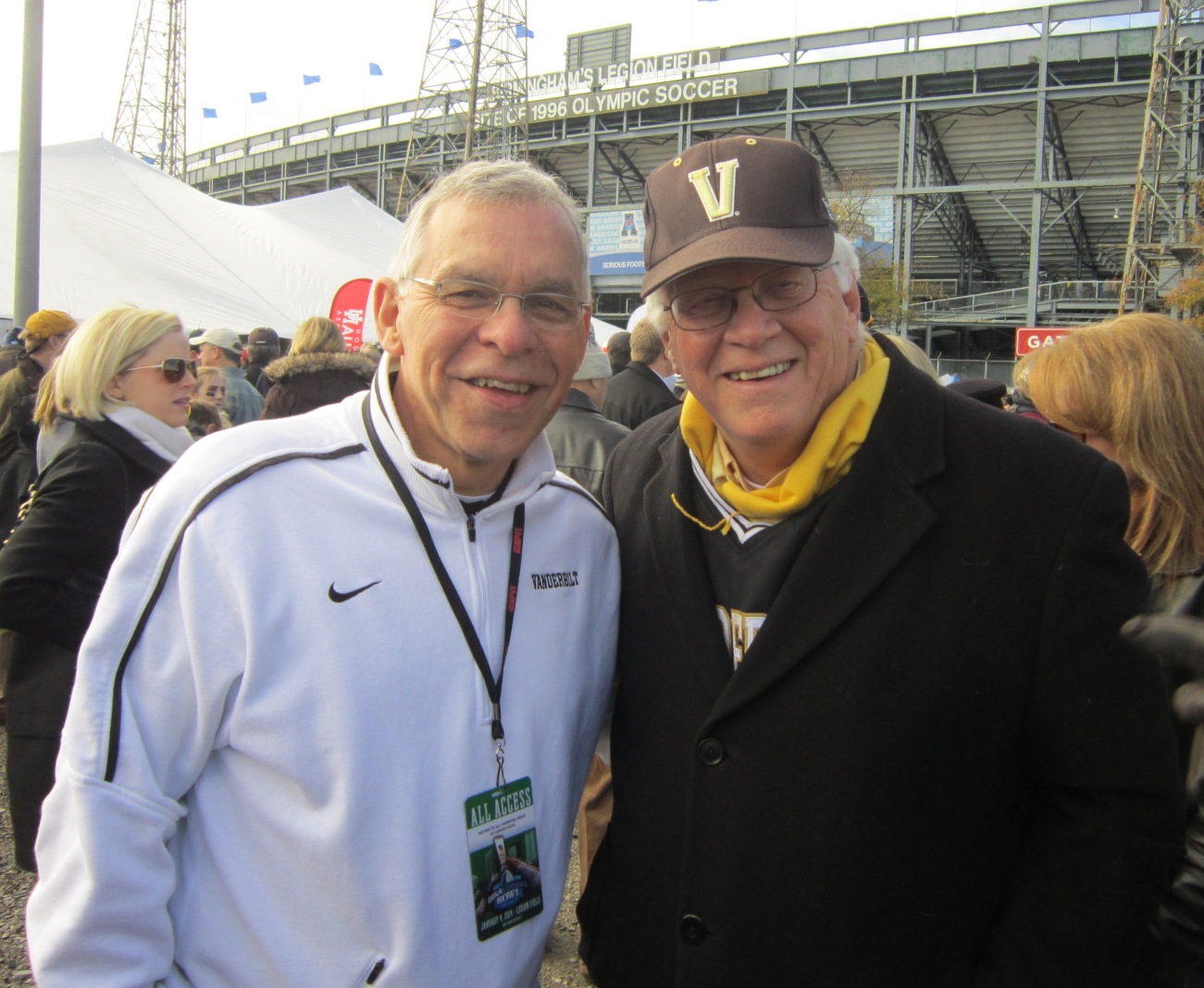 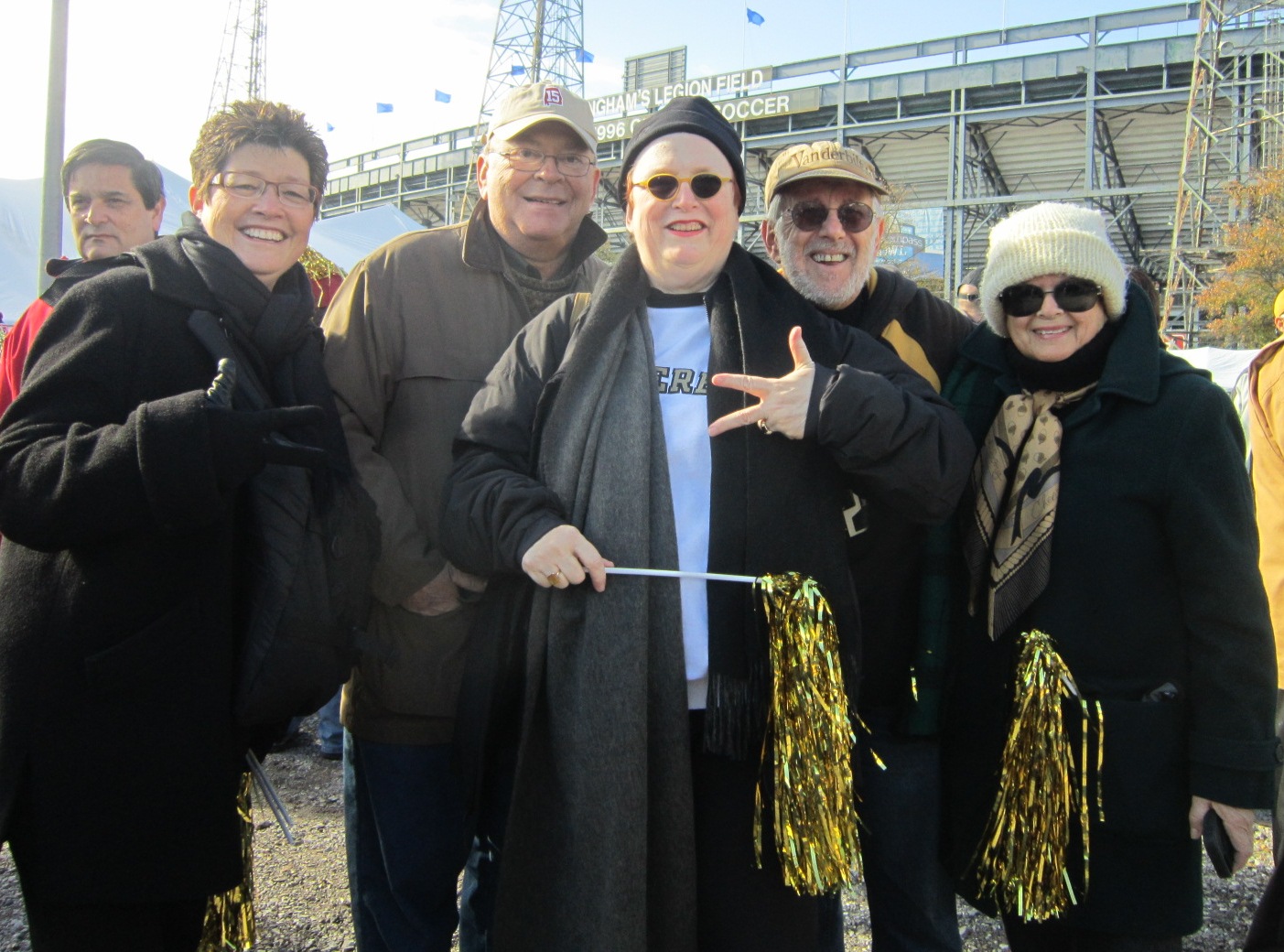 Our host Caryl Privett (center), who grew up in Birmingham, is a Vanderbilt graduate and now a circuit judge in her hometown.  She is shown here outside Legion Field with (left to right) Carla Offenburger, George Andrews of Birmingham, and Paul and Carol Kurtz of Athens, Georgia. 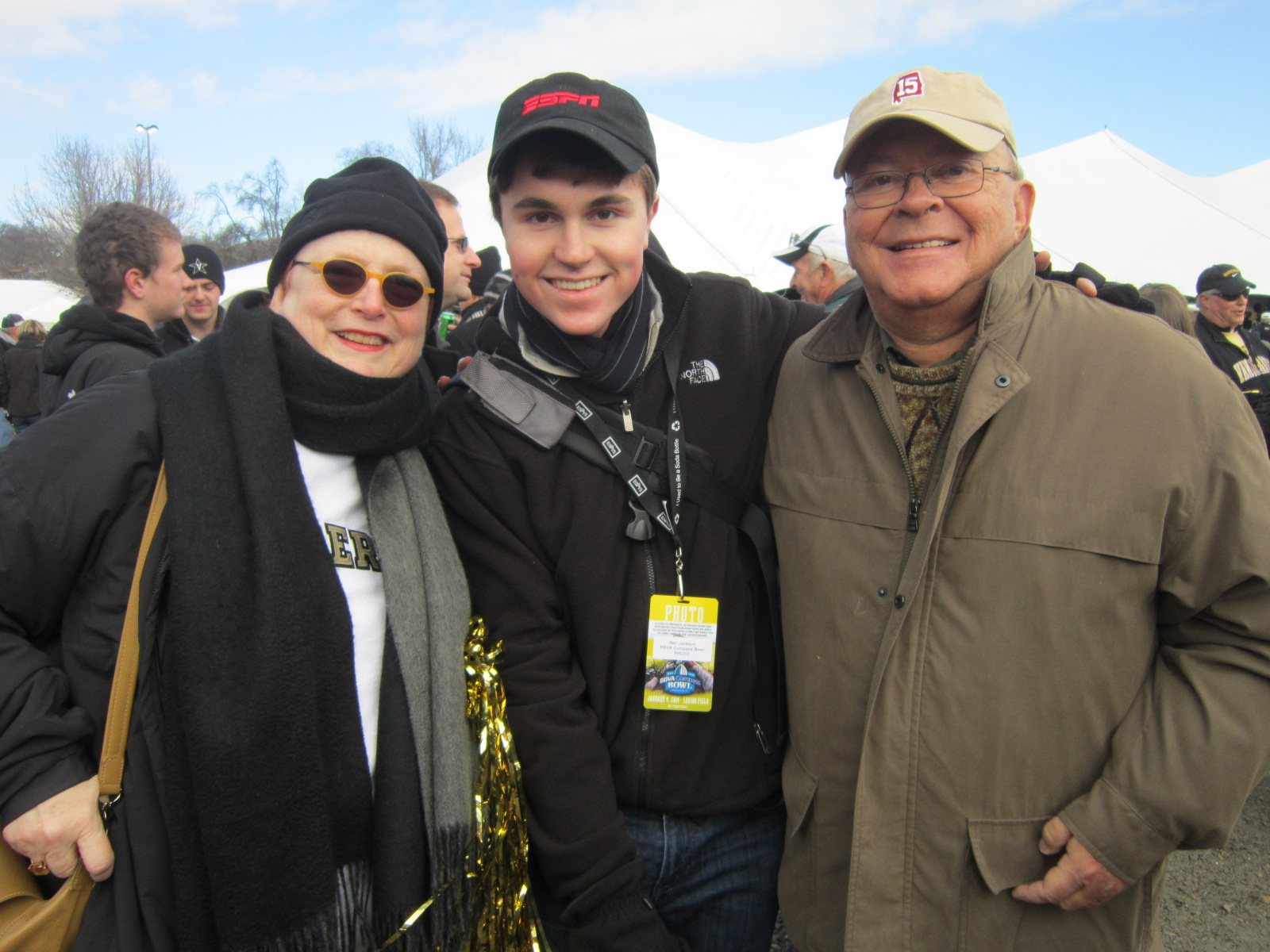 Caryl Privett meets pre-game with her young pal Ben Jackson, an outstanding photographer who is a high school senior in Birmingham and was invited by ESPN to be a sideline still photographer at the game. At the right is Privett’s friend George Andrews, a Birmingham lawyer who is young Jackson’s uncle. 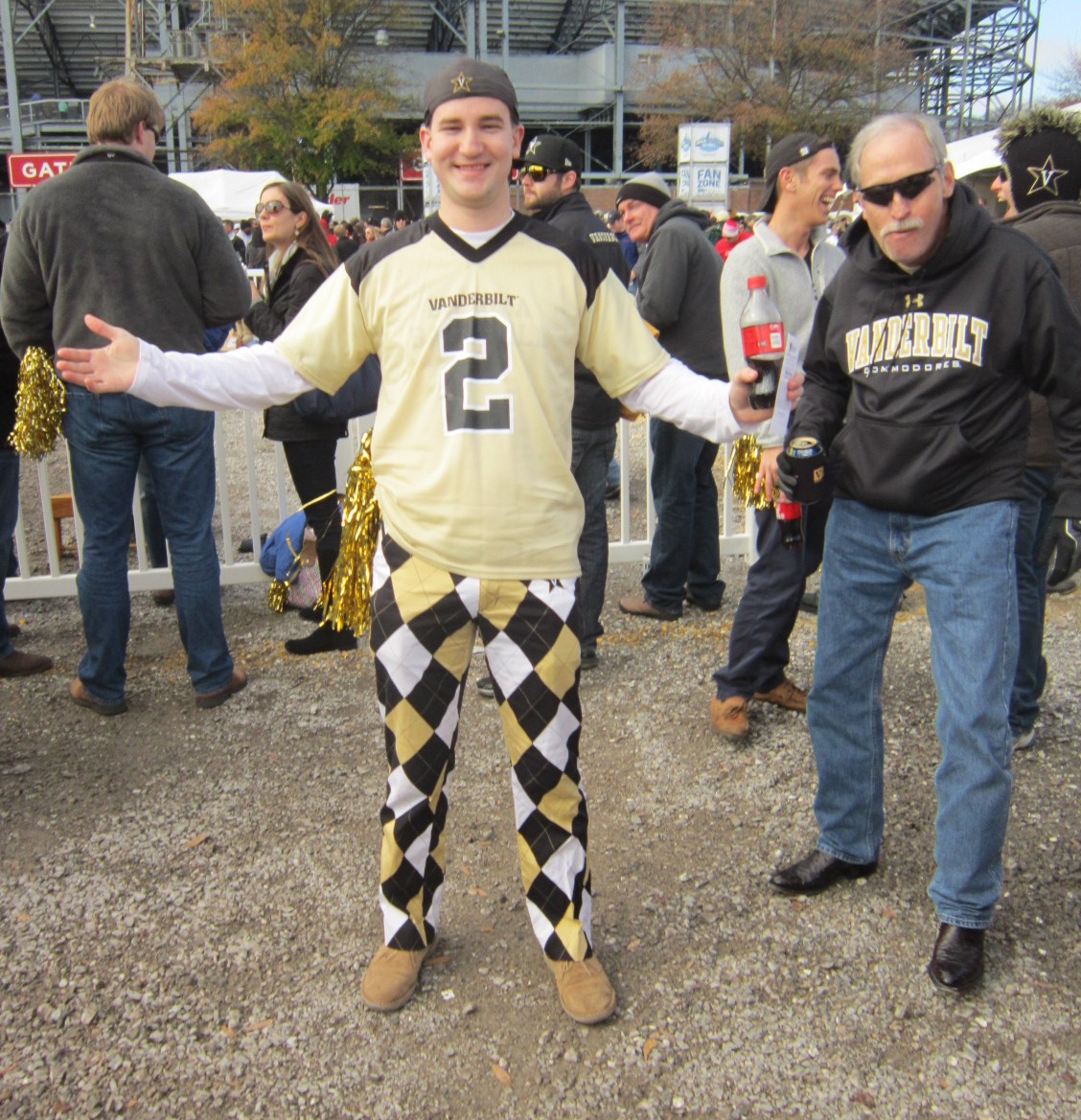 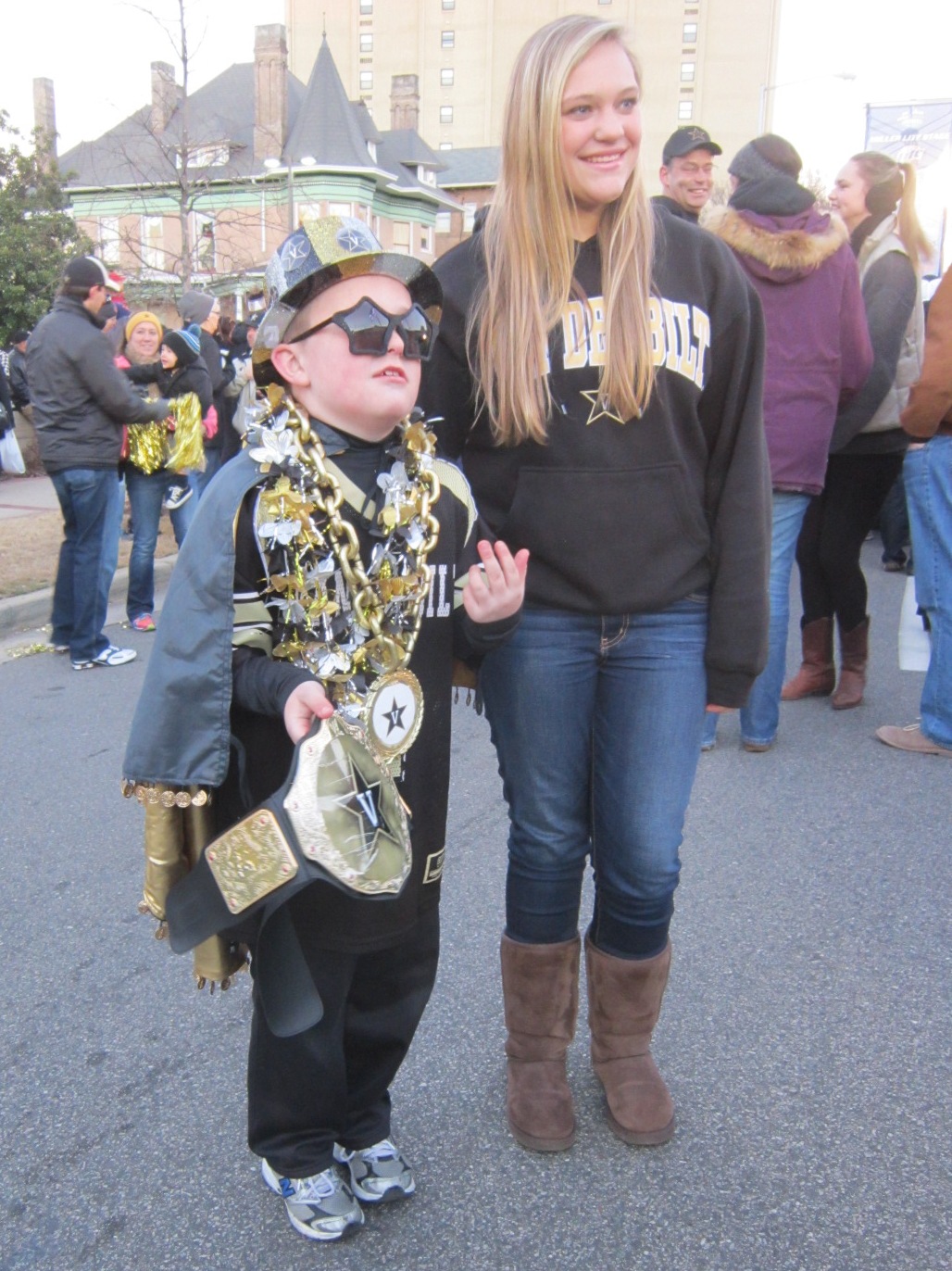 This young fan went all out in putting together his Vandy outfit for the game. 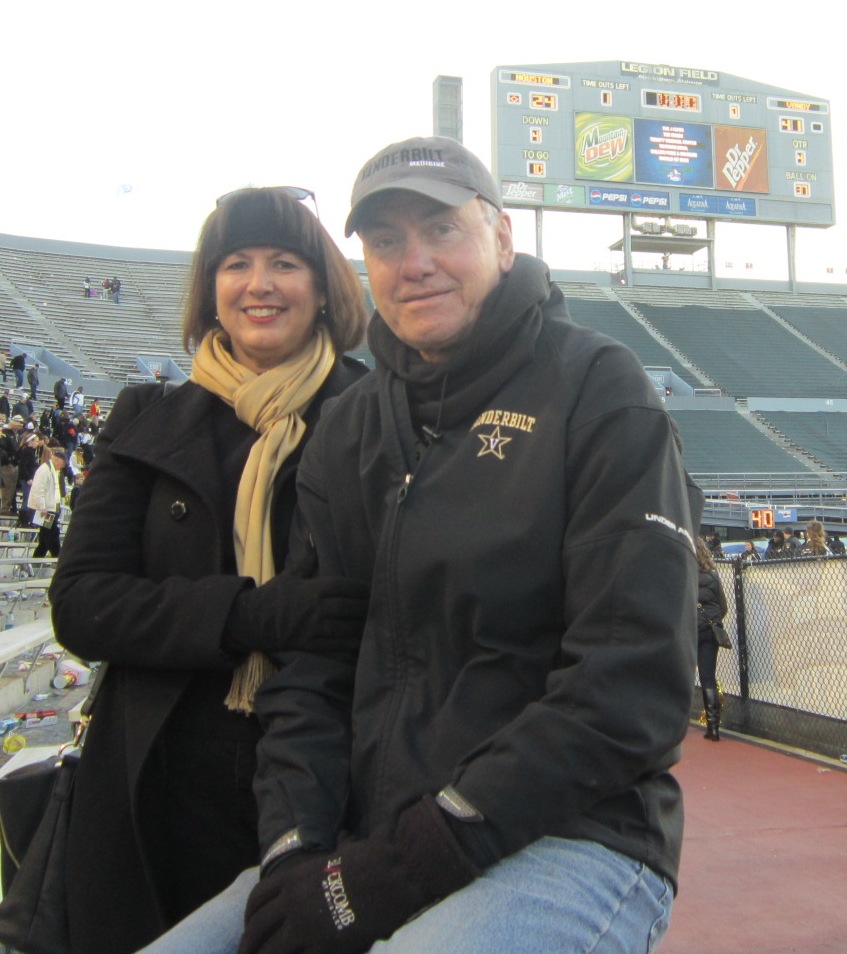 Our Vandy friends Margot and Dr. Jeff Fosnes of Cross Plains, Tennessee, are shown here below the scoreboard at Legion Field after the Commodores won the BBVA Compass Bowl.   Jeff was an All-SEC basketball player and an Academic All-American for Vanderbilt in the mid 1970s. 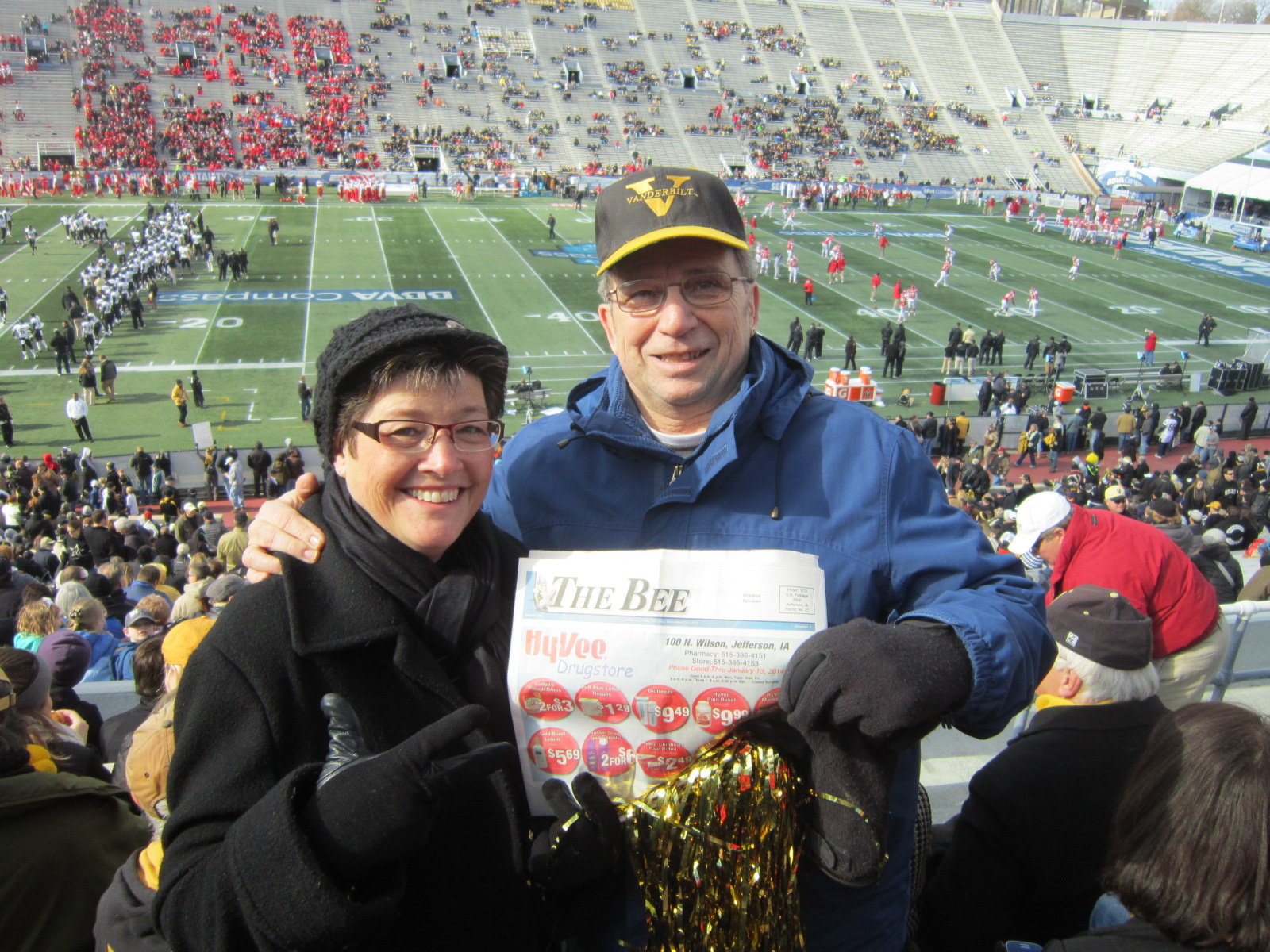 Here we Offenburgers are in Legion Field just before the start of the BBVA Compass Bowl game.  We were holding up a copy of the Jefferson Bee, which is published by our hometown newspaper.  They invite people to get such photos taken with copies of the newspapers at far-flung places, so they can share the pictures with their readers.

One thought on “Vandy wins bowl game, then loses its coach and now has a new cheer”