COOPER, Iowa, Jan. 24, 2014 — The P.E.O. needed me, so of course I reported for duty.  Chapter “GY,” of Des Moines, was having its annual luncheon raising money for college scholarships, and the sisterhood asked if I would be guest speaker. Wise guy that I am, I took note that this particular chapter includes my mother-in-law and my two sisters-in-law as members, and said yes immediately.  The contact person asked what my fee would be, and I said “a pie made by my mother-in-law.”  And I had a grand time delivering the speech on Saturday, Jan. 18.

Rare for me here in my late years, I actually spent some time researching and preparing my speech.

Now, most people in Iowa know about P.E.O.  But in case you don’t, it is “a philanthropic educational organization interested in bringing women increased opportunities for higher education,” per the Internet site of Iowa Wesleyan College in the southeast Iowa town of Mount Pleasant.  P.E.O. was founded on campus there in 1869, and thus Mount Pleasant has Chapter “A.”  There are now said to be 300,000 women who are members of 6,000 P.E.O. chapters (each carrying letters from the alphabet) in the U.S. and Canada.

They keep secret about what “P.E.O.” actually stands for, which over the last 140 years has made a whole lot of journalists, husbands and other gossips all the more curious about it.  Oh, we kid them about their secret name — “it’s really ‘Praise Each Other,’ isn’t it?” But knowing that they do a lot of good, we let them get away with it. 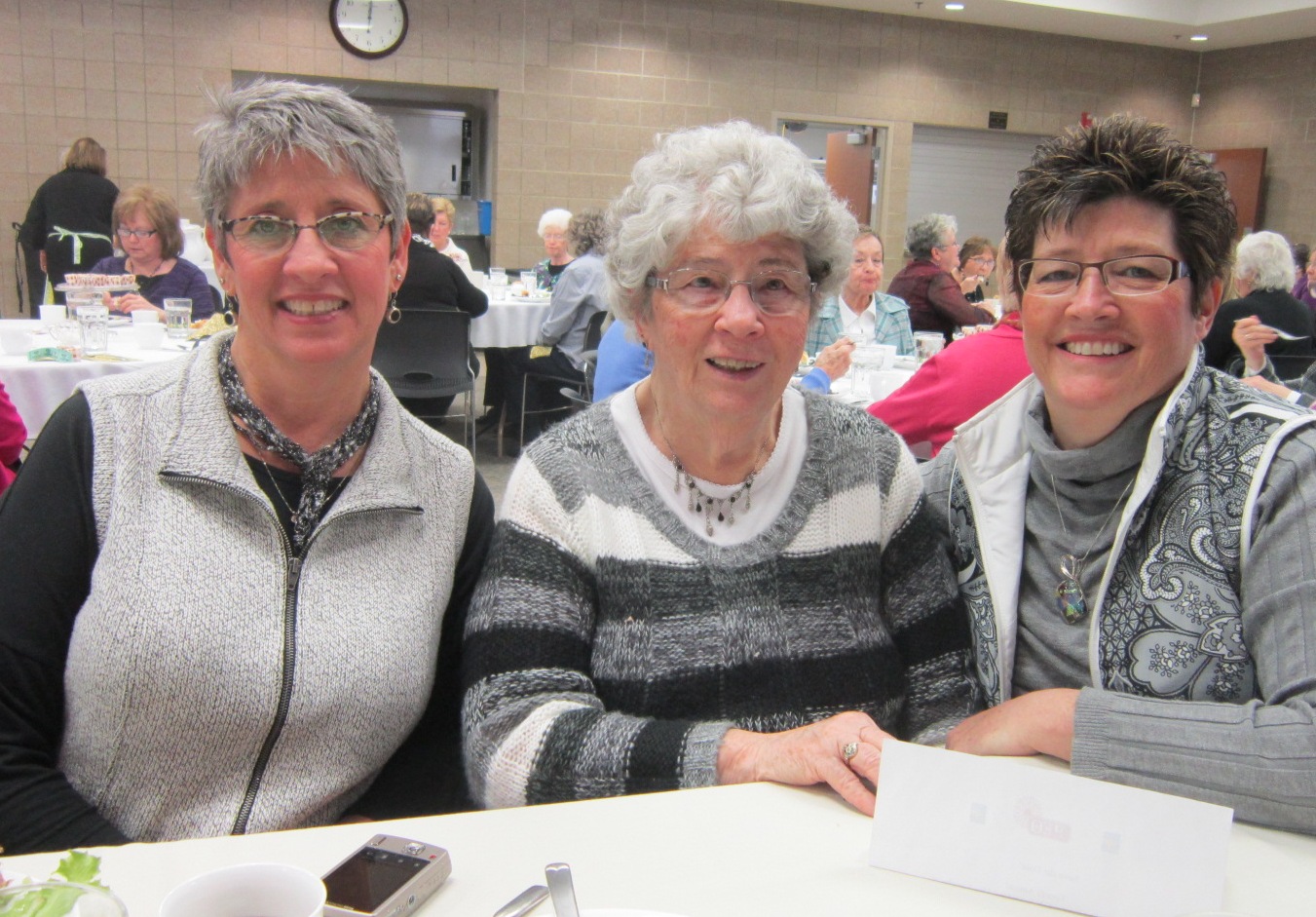 The speech judges at my P.E.O. appearance — my sister-in-law Chris Woods, my mother-in-law Sue Burt and my wife Carla Offenburger. Another sister-in-law, Tammie Amsbaugh, was AWOL.

One thing I was reminded of, as I was doing my pre-speech research, is that while P.E.O. provides scholarships for young women heading off to many colleges and universities, the organization owns and funds Cottey College in Nevada, Mo., a town of 9,000 in the southwest part of that state.  The two-year school, which now offers some four-year programs, was founded in 1869 by Virginia Alice Cottey, who believed women should have equal educational opportunity with men.  In 1927, she “bequeathed” the school to P.E.O., according to the fine Cottey College site on the Internet: www.cottey.edu.  Today, there are about 350 women students from 40 states and 26 nations.  The photos of the campus made me want to go see it.

As I continued browsing, I was delighted to see that Cottey also has intercollegiate sports — volleyball, basketball and softball, with cross country and tennis being added.  The Cottey teams are the “Comets,” and their colors are yellow and white — same as P.E.O.’s official colors.

Naturally, I wondered what the fight song is.  If you have intercollegiate teams, you certainly have a fight song, don’t you?

I sure couldn’t find it on the Cottey College website. I did come across the Cottey alma mater, which is an original tune (give them credit), and very alma mater-ish in its lyrics, otherwise unremarkable.  But no fight song.

Late on Friday afternoon, just more than 12 hours before my speech, I emailed Steve Reed, director of public information at Cottey, and Dave Ketterman, the head basketball coach and athletic director, asking what the fight song is and where I could find it.  I thought it might be fun to sing it to the P.E.O. sisters at lunch on Saturday.

I heard back immediately from Reed: “Cottey does not have a fight song.  Athletics were re-introduced in 1999, so no historic fight song that I am aware of, and no newly-composed ones, either.”  Later I heard from Coach Ketterman: “I have no idea about a fight song.  Sorry.”

Loyal readers here know that I have a reputation as a sort of “Doctor of Fight Songs.”  I have helped resurrect them at three Iowa colleges — Loras College, Buena Vista University and Coe College. I blogged about that last fall, and you can read that by clicking here.

Back in 2002, I was hanging out at Briar Cliff University in Sioux City — that’s a Catholic school founded by nuns of the pacifist Franciscan order.  President Bev Wharton and I were talking about what an ambitious sports program BCU now has.  I asked what their fight song was, and I thought she was going to faint. “We can’t have a fight song!” Wharton blurted. “We are a Franciscan university!”  I responded, quite reasonably I thought: “Well, you still need a song, so let’s call it a ‘spirit song,’ and I’ll write you one.”

And I did.  I even had Brad Mariska, a Buena Vista graduate who went on to earn a master’s degree in musical composition and is now a high school band instructor in Austin, Minn., write music to carry my words.  Briar Cliff ignored us.  But for the record, here’s how I it started, and please note the thoughtful accommodation I made for their Franciscan feelings about not mistreating anybody:

We value our opponents,
We’re so glad that you’re here,
So please don’t think us nasty
If we try to kick your rear!

Well, actually you can hear the whole thing in a YouTube posting by clicking here.

O.K., now, back to Cottey College.

I did not have much time to write and rehearse.  I needed a familiar tune that I knew how to sing, one I could write lyrics for, to tell Cottey’s story.  So I borrowed the “Buena Vista Fight Song.”  Lord knows, with all I’ve done for that song at that school, I ought to be able to borrow it once in a while.

This snappy tune was written by Will B. Green, a 1941 graduate of BV who later returned to his alma mater and served as its legendary band director from 1950 to 1972.

Here is the BVU band playing it; you can listen to the music while looking on down below, to the lyrics I’ve written for the fight song for Cottey College:

Cottey Comets, we are oh so bright!
Streaking ‘cross the skies in yellow and white.
We’ll be successful
Wherever we go,
Because right behind us is the P-E-O-o-o-o!

Cottey Comets! We are cute and tough,
But even better we are wise.
We’ll win today and
We’ll win tomorrow,
And we can win without guys!

So, there you go, Cottey.  Sing it loud, sing it proud, and may a new force be with you.

I used the fight song to finish my speech, and the P.E.O. sisters in Des Moines seemed to love it.

Oh, you are probably wondering about my pay-off pie, aren’t you?  My mother-in-law Sue Burt, of Des Moines, has been a fantastic pie baker over the years, but for some peculiar reason, she has lately decided she is no longer making them for my brothers-in-law and me.

However, she knew I’d out-foxed her on this P.E.O. speech deal.  So she hired her friend Frieda Griffin, also of Des Moines, to make me a pie.  And, wow, it was better than my speech.  It was better than the fight song.  It was an apple pie Griffin made from a 62-year-old recipe, which once won her second place in a Living History Farms apple pie baking contest.  She topped the perfect crust with Velveeta cheese balls that she shaped to look like apples, complete with stems and leaves!

Here’s the pie, right after we got it home (and ate one of the cheese “apples”) and right before we sliced it. 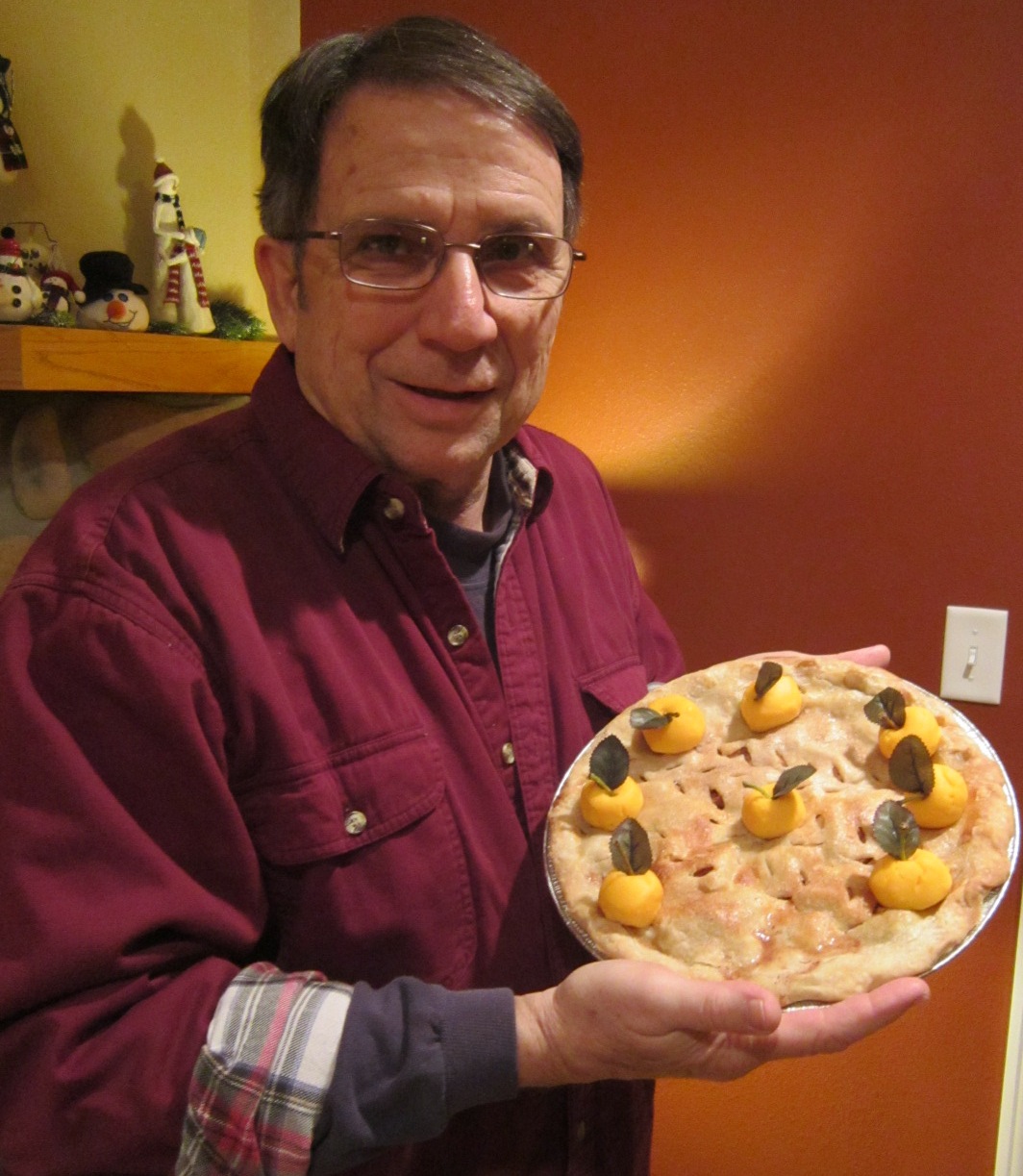 You can email the columnist at chuck@Offenburger.com or comment using the hand form below here.

One thought on ““Doctor of Fight Songs” helps out the P.E.O. and Cottey College, too”