INDIANOLA, Iowa, Nov. 12, 2013 — The Buena Vista University football team, which I’ve long followed, had a great victory here last Saturday, and you can see our coverage of that with the Feature Photo, elsewhere on this site.  But I had a little victory of my own here, too.

When the Beavers scored their first touchdown, the BV cheerleaders lined up in front of their crowd, paused and then started singing, “Dut, da dutta dut, da dut, dut, DUT!”  I first thought, “Huh?”  But then I realized their tune was the exact intro into the “Buena Vista Fight Song”!  Since this was a road game, the cheerleaders knew the Simpson public address announcer was not going to play a recorded version of the BV song, and the Simpson pep band was even less likely to play it.  So the cheerleaders came up with their own trumpet-like opening, “Dut, da dutta dut, da dut, dut, DUT!”

And then they sang on with the actual words, loud and clear:

Beavers fighting with our spirits high.
With our colors brightly streaming.
We fight with valor and with dauntless care,
Let us shout it everywhere!
FIGHT! FIGHT! FIGHT!

Beavers fighting out to win the game,
For our teammates, let us SING!
We’ll FIGHT! FIGHT! FIGHT! for the school we love,
For BUENA VISTA ALWAYS!

Oh my, would ol’ Will Green have been proud!  He was a 1941 graduate of ol’ Buena Vista College; he became the legendary band director at the school from 1950-1972, and he wrote the “Buena Fista Fight Song.”

I quietly sang along with the cheerleaders, feeling much more triumphant than I was showing. 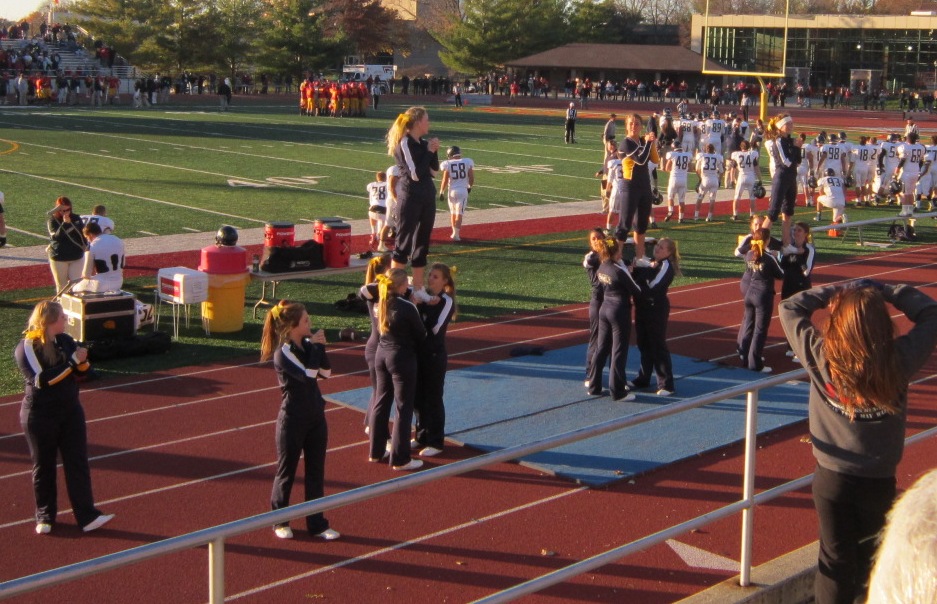 Buena Vista cheerleaders in action at Simpson College in Indianola.


As you are probably guessing, I have some history with this song.  Fifteen years ago, my wife Carla Offenburger and I joined the faculty and staff of BVU.  I’d long been a fan, largely from a friendship with a former president, Keith Briscoe.  Our son Andrew Offenburger did his undergraduate work there, from 1994-’98, and we spent a lot of time there then, getting to know new President Fred Moore and many others on the campus and in the town of Storm Lake.  We really liked it.  When I left the Des Moines Register in the summer of 1998, I signed on to be a visiting professor of journalism at Loras College in Dubuque for one semester, but before I’d even started at Loras, Moore had hired Carla and me to join BVU full-time in the summer of ’99.

Now, we Offenburgers have this one principle that we think makes total sense, but a lot of other people seem to think is peculiar.  We don’t think anybody should be allowed to graduate from their high school or college until they prove they know and can sing the fight song and alma mater.  They’re not that hard to learn, people.

I mean, when I taught the semester at Loras, and when I taught a 3-week “January term” at Coe College in Cedar Rapids, I learned their fight songs, sang them to the students at the first meeting of our class, and told them that they’d be required to sing the fight song in front of the class to get a passing grade from me.  Seriously.  I had a couple of really bright students who thought this requirement was nonsense, and initially they refused to learn and sing “Hail Loras Varsity” and “I Want to Go Back to Coe Again.” My answer never wavered.  “If you refuse to meet this requirement, I will give you an F,” I would calmly tell them. “Think about how that will look on your transcript.”

In the years since then, I’ve run into many of those former students and, to a one, they’ve told me they were glad I made them learn their school’s fight song.

As we were getting ready to move to Storm Lake and start at Buena Vista, in July 1999, I checked with the university’s communications director Tim Seydel about the fight song.  Whatever it is, Seydel told me, no one knows it.  I checked with the music department and learned that while the band apparently played the fight song, no one could come up with the words.  Then Seydel did some further checking, called me back and told me that Professor Rick Lampe, a biologist, might be able to help me.  I called Lampe, and he told me that he’d been a BV undergraduate himself, back in the day, and he had learned the song then.  He was hazy on the words so many years later, but he had an idea.

“I remember that Will Green, our band director, wrote the song,” Lampe said.  “Will’s dead by now, but his widow Adeline Green is a dear woman who lives in retirement just off the campus.  When you get moved in up here, I’ll call Adeline and make an appointment for us to go visit with her about the song.  She’ll enjoy that.”

So on a hot July day, we did just that.  When we told her we wanted to try to resurrect the fight song that her late husband had written, she was very pleased.  Did she have a copy of the words she could show us?  Oh yes, she said, and she went off to the next room, coming back with a music score, with notes and words handwritten in pencil on musical scales.  It was Will Green’s original copy of the fight song!  It was at least 50 years old, maybe even 60 years old.

Lampe and I treated it like it was gold.  We told Adeline we would be urging the university to work with her to preserve the composition – and I hope that happened before her death in 2011.

What I know happened is that I scribbled down the words, Lampe then taught Carla and me the tune, and we all practiced singing it.  At that point, I guarantee – we were the only three people on the campus who knew that fight song!

We resolved to teach it to the student body, starting with the freshmen, as soon as they arrived. Carla organized a special event, or seminar, that all freshmen had to attend.  We called it “The History & Culture of the University.”  We showed a historic video that showed how BV heroically recovered from the 1956 fire that destroyed Old Main.  We recounted other key moments in BV history.

We had the cheerleaders come lead some cheers, including BV’s famous “locomotive,” during which everybody swings their arms back and forth while spelling out B-E-A-V-E-R-S!  We had popular wrestling coach Al Baxter, whom everyone called “Big Beaver,” give a pep talk about how important school spirit is.

We introduced the fragile, then 87-year-old Adeline Green, who was sitting in the front row, beaming.  And then we handed out half-sheets of paper to everybody, with the words of the alma mater and fight song. We led everybody in singing the songs a couple of times. It was loud and proud!

Then Carla announced that we had a hot follow-up deal for the students.  She told them that Lampe, she and I would each be carrying a stash of $5 bills for the next week.  If a student would learn the fight song, stop us when they see one of us on campus, and then sing the song (without looking at the printed words), we’d pay $5 for a successful performance.  And for the next several days, every time any of the three of us would be walking between buildings, students would stop us and want to sing for the money.

The next couple of years, at opening convocations, I handed out the song sheets, soloed on the fight song, then had the students sing it with me.

Slowly, it became an accepted thing, that most students would at least be familiar with the fight song and alma mater.  Everybody would at least have an opportunity to sing the songs several times during their years on campus.  Many wound up knowing the songs by heart.  I remember a few years after we left BV, Carla and I were delighted to see videos from the senior class dinners, held just before commencement, showing the graduating Beavers standing and singing the songs.

With valor and with dauntless care!  Let us shout it everywhere!

And when I saw and heard those BV cheerleaders singing those words here on Saturday, wow!  It was a fine moment for this old eternal sophomore.