INDIANOLA, Iowa, Nov. 11, 2013 — I’ve been going to Iowa Conference small-college football games for 20 or 21 years now, and I swear, the experience of doing that gets better every autumn.  Saturday, it was here at Buxton Field on the campus of Simpson College, breathtakingly beautiful in the lingering fall colors.  And, Buena Vista University Beavers fan that I am, it had a blissful finish with quarterback Bobby Brown running four yards for the winning touchdown as the clock died, BV winning a heart-stopper, 34-32. 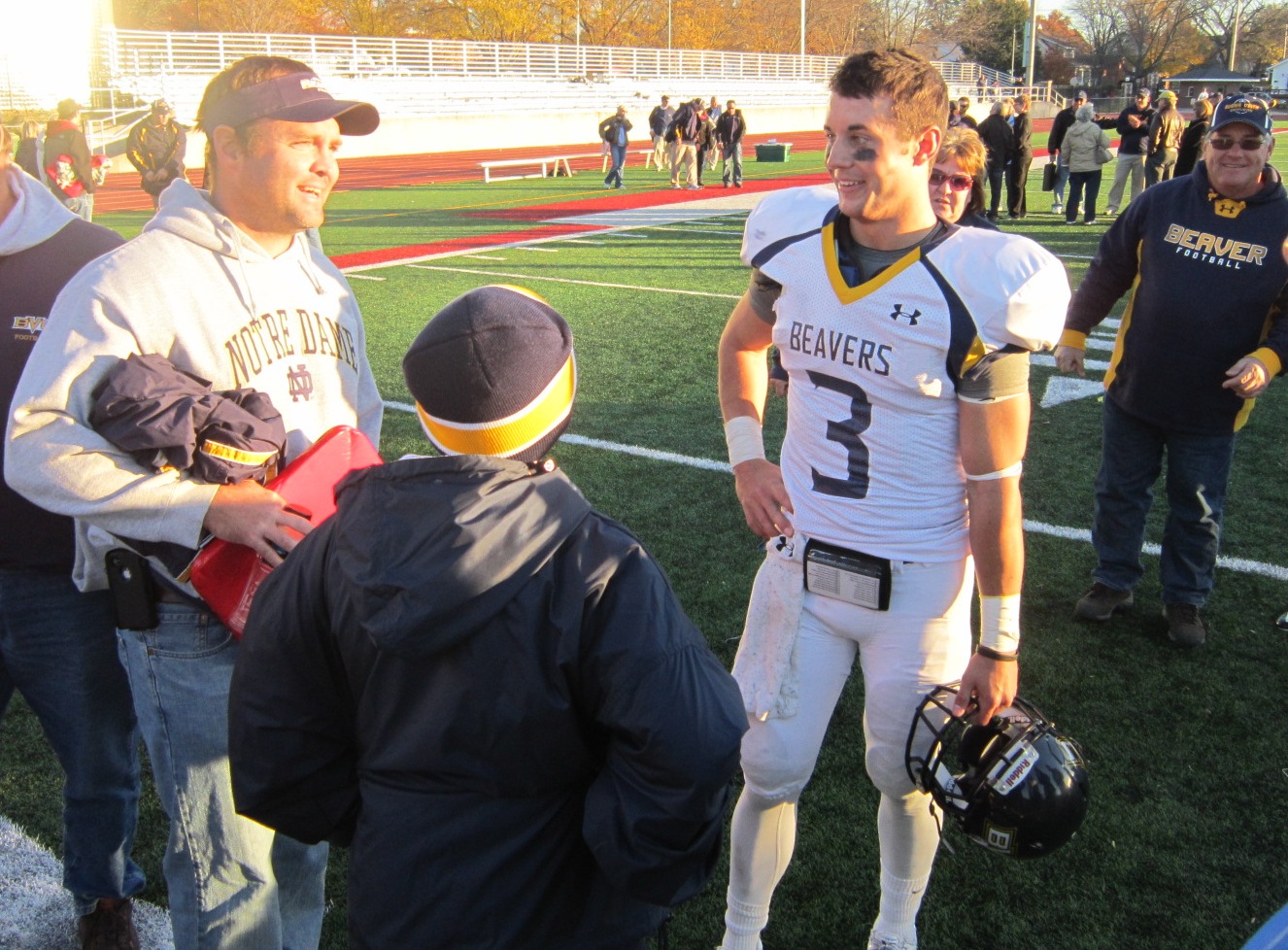 It was like a bonus day of ideal fall weather.  Such days are routine in the early and mid-seasons in the Iowa Conference.  Games in mid-November aren’t usually as comfortable as Saturday’s was.

Fans always argue whether the prettiest place to watch a football game in Iowa is at Luther College in Decorah or at BV’s stadium on the lakeshore in Storm Lake.  But there are really no bad settings, so it’s equally enjoyable if you’re watching games at Wartburg College in Waverly, Central College in Pella, Coe College in Cedar Rapids, here at Simpson, or at either the University of Dubuque or Loras, the latter two both in Dubuque.

Wherever, you will see things like this: To start the game here, Simpson’s Jake Schrodt, a junior defensive back from the tiny town of Prole, Iowa, stepped out from the line-up of players on both sidelines, he removed his helmet, grabbed a hand microphone, and sang an a cappella rendition of the National Anthem.

We’re starting to see and hear bands again, too.  Thirty years ago, all these colleges had fine marching bands.  Then they started dumping their marching band programs as snooty band directors opted to emphasize concert and jazz bands instead of marching.  BV had the last marching band in the conference in about 1997.  Some of the schools began booking area high school bands to march.  Or they talked some of their own students into forming pep bands.  Simpson had a terrific pep band playing throughout the game Saturday.  Maybe we’ll see the return of full marching bands soon. Former conference member William Penn University in Oskaloosa and a couple of the community colleges have started marching band programs in the last couple of years. Let’s hope it’s a trend.

You also see good, fun and usually very competitive football — played by athletes who generally aren’t big enough or fast enough to make it in the top levels of NCAA competition.  So they opt to pay their way to the Iowa Conference schools, which play in non-scholarship NCAA Division III.

You’d be hard-pressed to find more of a “gamer” than Simpson quarterback Taylor Nelson, who played his high school ball at Valley of West Des Moines.  Nelson is in his fourth year starting as the Storm’s signalcaller, and he has accumulated more than 10,000 yards of total offense, and in Saturday’s game, he topped 9,000 career yards in passing.  He has engineered some shocking Simpson comebacks and upsets in his four years.  But the game Saturday, as I’ve reported, went the other way.

The action was fast and furious, especially down the stretch.  There were five touchdowns scored in the last 17 minutes and 34 seconds of play.  With just 50 seconds left, Simpson scored on a Nelson to Ryan Olson 19-yard pass to go in front 32-28.  Prospects did not look bright for the BV Beavers.

However, Brown, who grew up in Storm Lake, rallied the Beavers from their own 20 yardline on an amazing 8-play drive. A key play was a pass to Jalen Henningsen, who ran 33 yards — including hurdling a would-be Simpson tackler — to the Simpson four yardline.  There was one second left when Brown took the final snap, ran left, then dashed into the end zone for the TD and a 34-32 BV upset.

One more Saturday of regular season football remains, with Wartburg already having clinced at least a share of the conference championship.  Their Knights, now 5-1 in conference games, can win it outright with a victory at Loras, which is 0-6.  Other games are Simpson at Luther, Dubuque at Buena Vista and Coe at Central.

Check some additional views of this past Saturday’s fun in the photos below here. 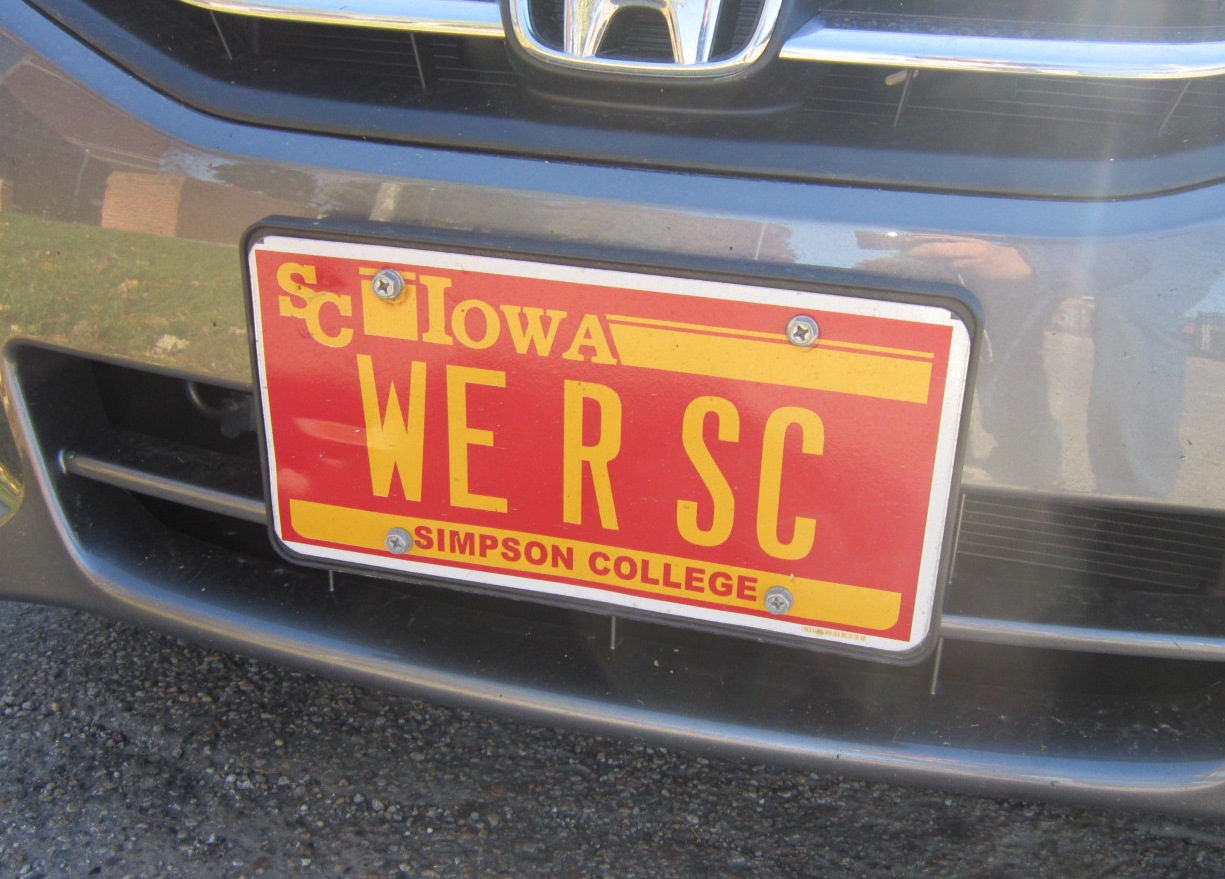 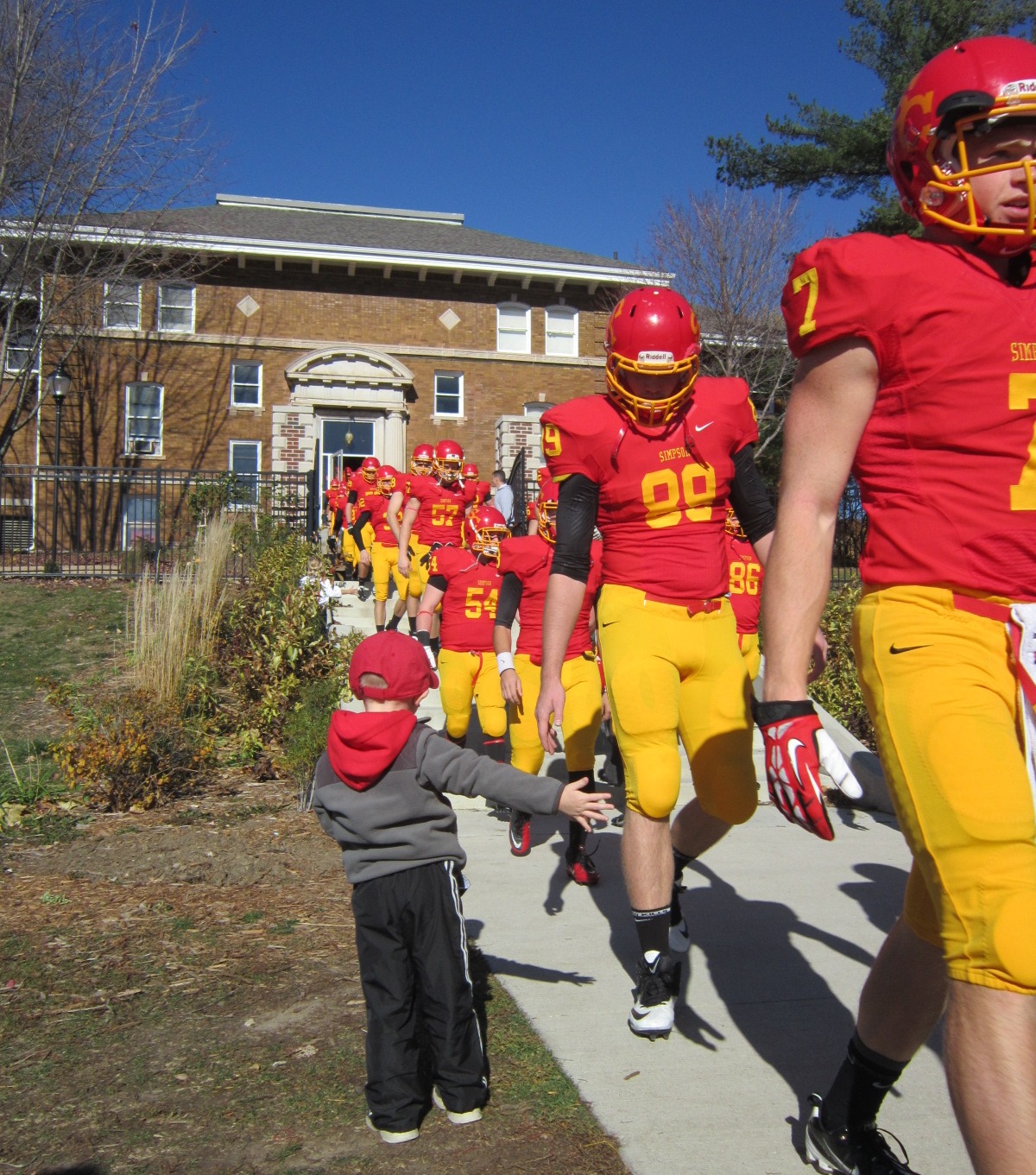 A neat scene at all Simpson College home games.  Young fans gather at the steps leading to the field from old Hopper Gym, to slap hands with the players. 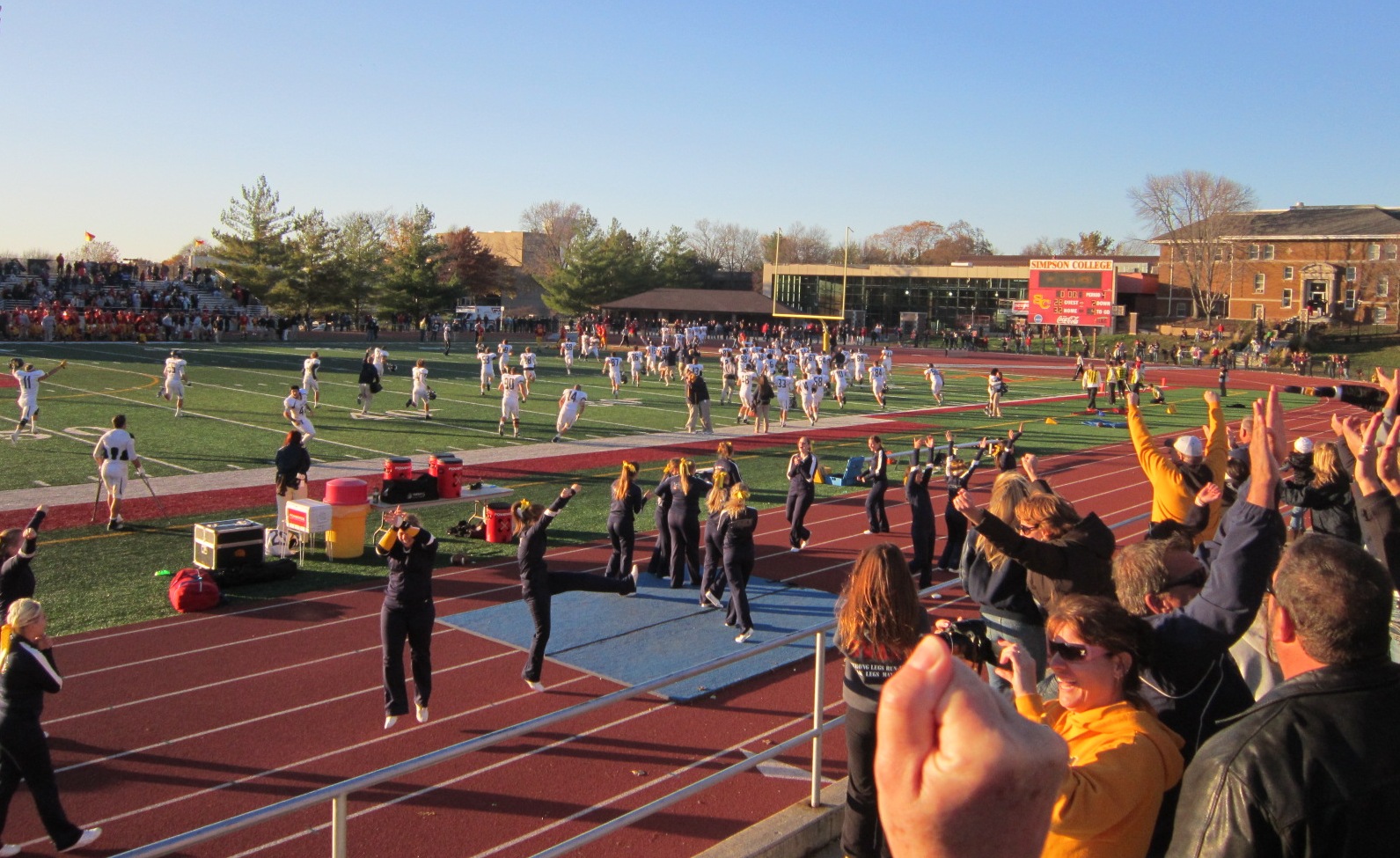 Here was the wild scene when Buena Vista’s Beavers won the game 34-32 on the final play of the game. 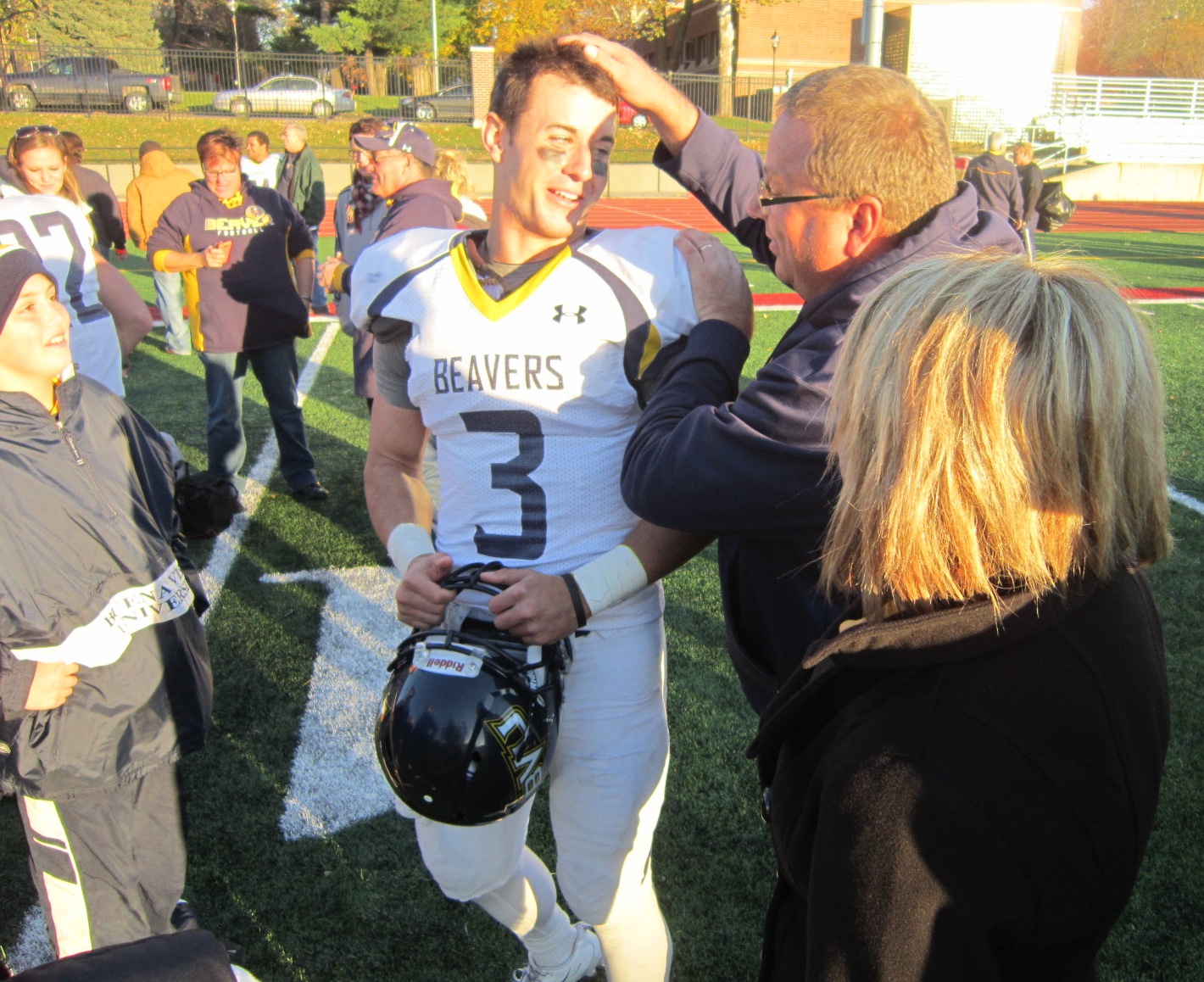 The BV quarterback Bobby Brown, who made the final touchdown dash, gets an attaboy from one fan. 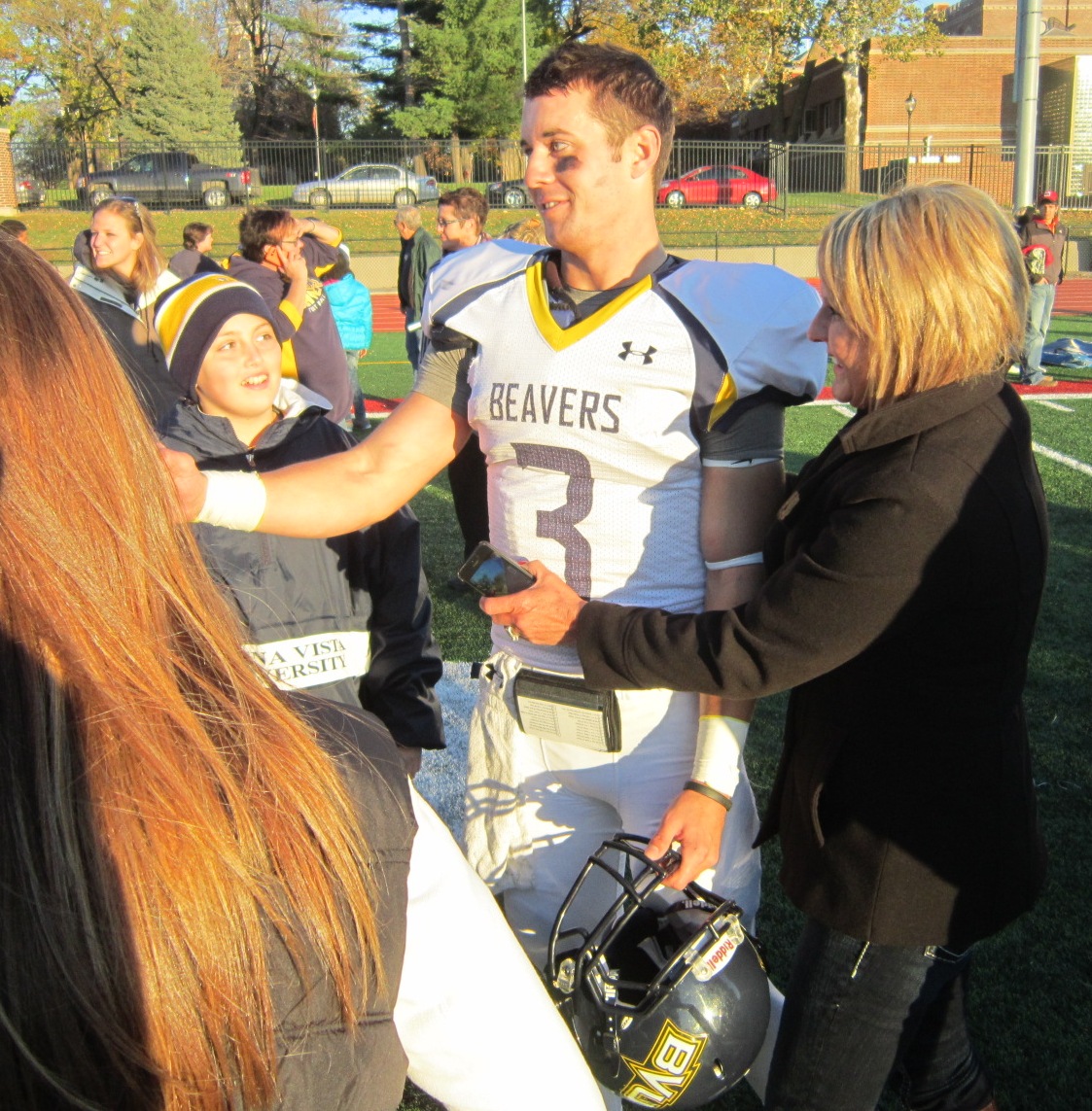 The quarterback gets directions from his mother Carrie Brown, to make sure he doesn’t miss thanking fans, especially the young ones, who were lining up to congratulate him. 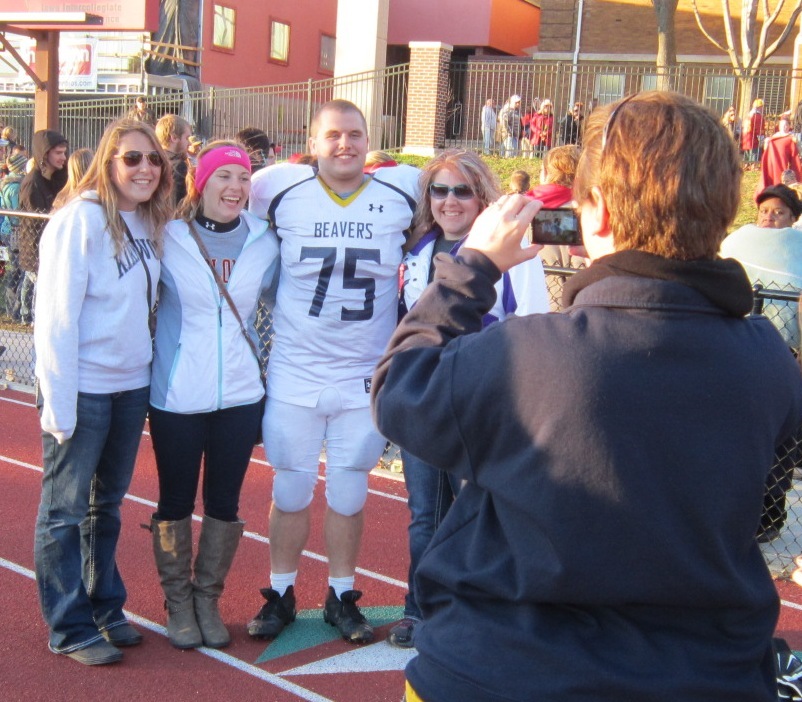 There must have been hundreds of photos taken, with players from both teams, after the game.  There were all kinds of poses like this one, with BV freshman offensive lineman Michael Davidson grinning with three of his fans.

You can email the columnist at chuck@Offenburger.com or by using the handy form below here.