IMOGENE, Iowa, July 7, 2015 — This little town of 69 in southwest Iowa has been surprising people for well over a century. Unusually big things seem to happen here. After watching it my whole life, now it strikes me — maybe Imogene has been like it is because of the continuous inspiration of the huge, beautiful St. Patrick’s Catholic Church, which since 1915 has towered above the town and surrounding countryside.

Talk about “big.” This Saturday, July 11, as many as 800 people who are members of St. Patrick’s, alumni or friends of the parish are gathering for the celebration of the 100th anniversary of the church building.  It’ll be a little crowded, but only a bit, because St. Patrick’s church can seat 500.  And that’s in a town that today has no residents who are practicing Catholics.

But everyone in the territory, Catholic and otherwise, rallies around St. Patrick’s parish and most all will be involved in the celebration.  That includes a 4 p.m. mass on Saturday celebrated by Bishop Richard Pates of the Catholic Diocese of Des Moines; a 5:30 p.m. dinner in the church hall and a big tent being set up behind the church, and an evening of Irish entertainment and dancing in honor of the ethnic history.  In addition the local booster group “Sons & Daughters of Imogene” have a weekend-long celebration called “Shamrock Days,” which includes all kinds of community games and activities, with the highlight being a “coed softball tournament” that runs from 6 p.m. Friday until about midnight Saturday night! 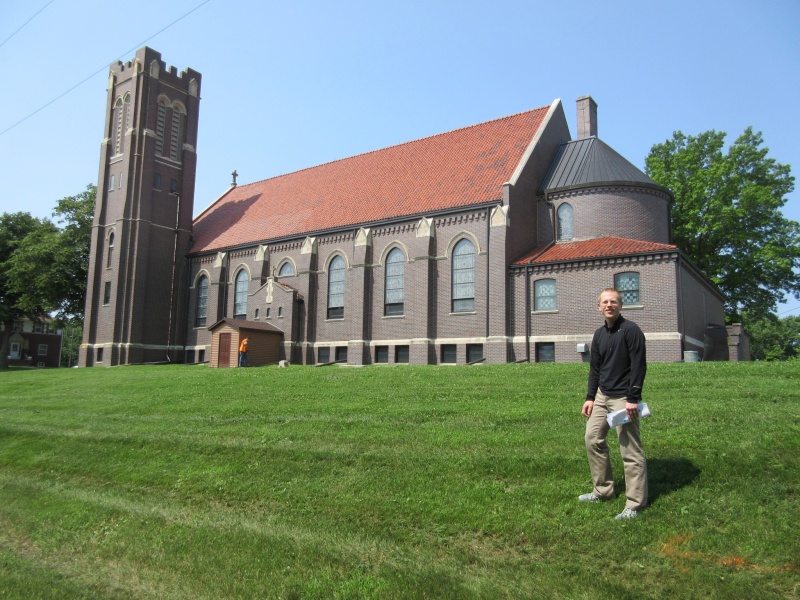 Zeb Burkhiser, standing on the east side of St. Patrick’s Catholic Church in Imogene in southwest Iowa, shows you just how big this church building is.  The bell tower extends 80 feet high.

The actual congregation of St. Patrick’s Catholic Church now includes about 145 families, who drive from about 35 miles in all directions for masses, religious education classes and other parish events.  And oh, are they ever generous stewards of their church!  They’ve donated and raised more than $500,000 in the last couple years to pay for a near total renovation of their church building — just now completed — and endow its maintenance long into the future.

Rare for most rural churches of any denomination, St. Patrick’s congregation is not primarily an elderly one. Proof of that is that the parish has 41 boys and girls who are altar servers, and there are more than 90 children enrolled in the religious education program that offers classes pre-kindergarten through high school.

Most of today’s kids at St. Patrick’s know that there were some high achievers who preceded them in the cassocks and classrooms of this parish.  That list is topped by the Leahy first-cousins, Eugene and Rev. William.  Gene Leahy, a grand character, became a lawyer and, from 1969-’73, the mayor of Omaha.  The beautiful pedestrian mall in downtown Omaha is named in his honor. He died in 2000 at the age of 70.  Father Bill Leahy, now 67, is president of Boston College, a position he has held since 1996.  He is one of the top-ranked officials of Jesuit higher education.

“One thing I’ve really come to love about St. Patrick’s is that it has such unusual stories in its history,” said Zeb Burkhiser, 35, a shirttail relative of mine who also was one of my journalism students in my teaching years at Buena Vista University in Storm Lake.  We talked on a recent day when he showed me through the building, while carpet layers, a masonry crew and volunteer painters worked busily all around us. 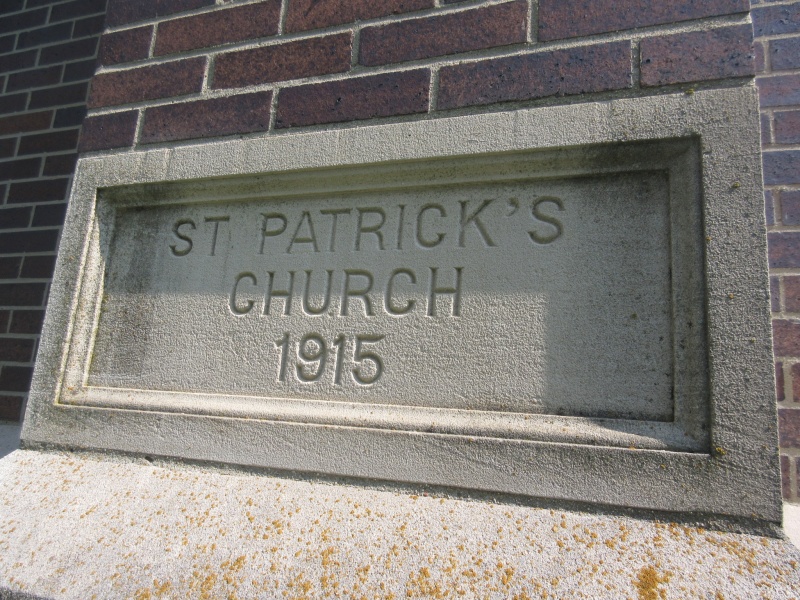 The cornerstone of the big church in Imogene. The first church on the site was a small, wood structure. It was torn down, with the wood used to build a new rectory, and a second slightly larger church building was built, of bricks.  That one burned, preceding the building of the current large building.

In an earlier letter, Burkhiser had given me some of the most fascinating vignettes in St. Patrick’s history in two concise paragraphs, which I’m just going to repeat here.

Our current church structure was built and furnished largely through the wealth of Father Edmund (or Edmond) Hayes.  He came to Imogene in 1888 to become our first permanent pastor.  He inherited wealth, and made more in California gold and oil and in Nevada silver mines.  Father Hayes personally went to Pietrasanta, Italy, to order the altars.  After the altars left Italy in November, 1916, the ship carrying them hit a German mine in World War I action, sinking the ship.  Subsequently, those valuable altars remain beneath the ocean to this day.  The current altars in our church were his second choice.  They are constructed of white polished Cararra marble, and came in thousands of pieces, in several railroad boxcars, over many months.  They took two years to reconstruct!  The main altar is 29 feet high by 18 feet wide, and the altar rail is of matching marble, with the bronze gates trimmed in gold.

The 15-foot-high stained glass windows came from Munich, Germany.  The large St. Patrick window in the choir loft was sent back three times before Father Hayes was satisfied with the face of St. Patrick.  Finally, the mosaic Stations of the Cross each have a white Cararra marble frame, and took a year to assemble all of them.

Father Hayes, by the way, also paid for the Italian artist who carved and designed the altars and other marble furnishings, to travel to Imogene and oversee the assembly of them here. 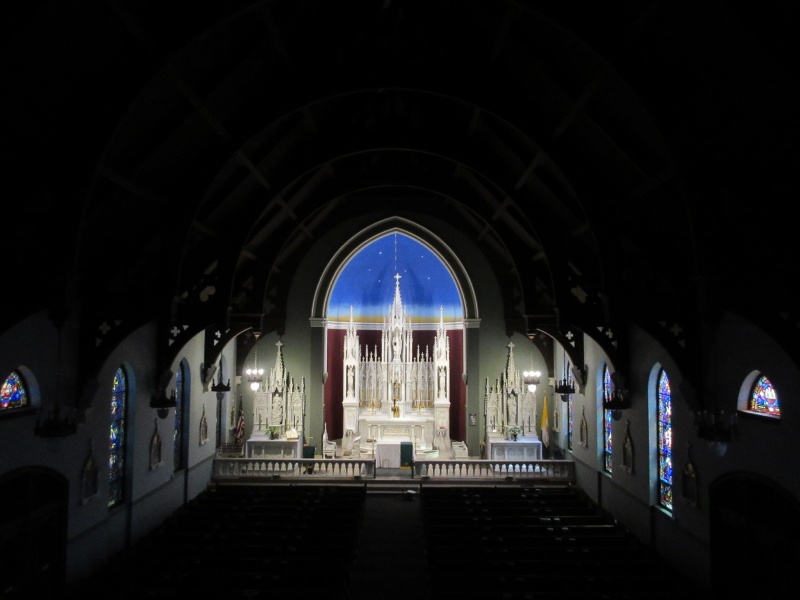 The interior of St. Patrick’s Catholic Church in Imogene, from the choir loft. 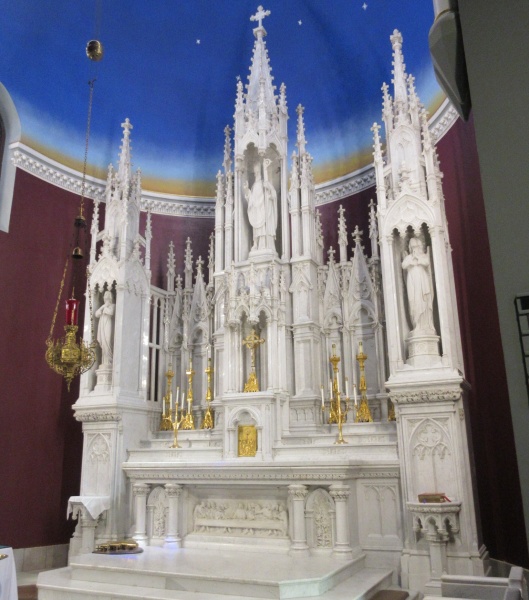 A closer look at the huge main altar, made of Italian marble.  One closely resembling it is at the bottom of the Atlantic Ocean.

The community must’ve been a very happening place about the time World War I was ending.  St. Patrick’s parish was busy, that’s for sure. Besides the new church being completed (the third structure that served a congregation founded in 1880), a rectory and convent were built, as well as St. Patrick’s Academy, an elementary & high school that operated until the 1960s.

Father Hayes was slowed by illness in 1926, and a young associate priest Rev. Francis Doyle was assigned to St. Patrick’s.  He took over in 1928 at Father Hayes’ death, and Father Doyle served until his death in 1966.  Those two priests served the parish for a remarkable total of 78 years!

Catholic pastors are never assigned for life today.  Seven years is their normal rotation.  The current St. Patrick’s pastor is Rev. Tom Kunnel, 55, a native of India who is fluent in eight languages, has been in the U.S. for 16 years, is now permanently assigned to the Diocese of Des Moines, and has been serving St. Patrick’s in Imogene and St. Mary’s in Red Oak since 2011.  “Father Tom,” as all here call him, is very popular with his flock.

His first dozen years in the U.S., he was at first an associate pastor of two parishes in the area of the Twin Cities in Minnesota, one parish having 5,600 families and the other 3,200 families.  He went on to become pastor of Immaculate Conception Catholic Church in Columbia Heights, Minn., a parish of 1,600 families. “And all those parishes I served in Minnesota had schools,” he said. “It was a very busy life.” 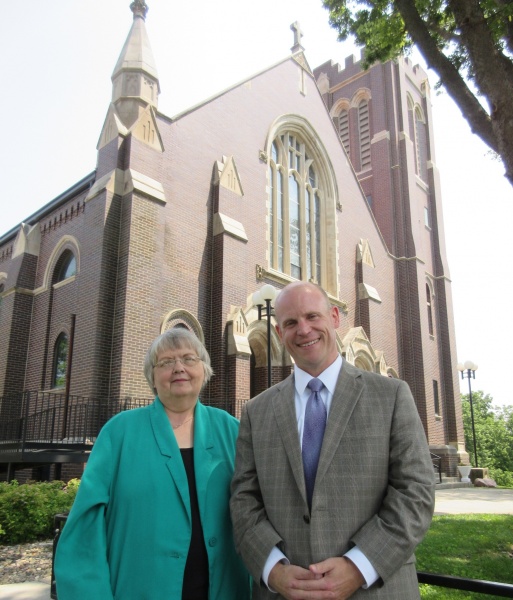 St. Patrick’s full-time volunteer church secretary is Margaret Laughlin, who lives outside Imogene, and one of the trustees and co-chairs of the celebration of the church building’s 100 years is Dan Kinsella, of nearby Silver City.  Both “married into St. Patrick’s” because their spouses grew up here. “I’ll tell you, I’ve been fortunate in my work to travel the world,” said Kinsella, a technology and business consultant, “but I love coming home to St. Patrick’s. These people are salt of the Earth. They’re spectacular.  I learn so much from them about life skills.”

So, what was Father Tom’s reaction the first time he drove into Imogene?

“Shock!” he said.  “It was so little!  But I thought, ‘Well, I wanted to be in a smaller parish where the days would not be quite as busy.’

“What I have found here now is something very special.  St. Patrick’s is a church that is loved by its people. It is a very close-knit parish that is dedicated to this church.  I decided my role was to help take care of their traditions and history, while also bringing some new ideas from my experience in other places.  I am using that in trying to give St. Patrick’s a good shaping for the future.”

Father Tom is awed by the long, strong ministries of Father Hayes and Father Doyle in St. Patrick’s past.

“I thank God for that gift of Father Hayes’ commitment,” Father Tom said. “He was totally dedicated to this parish.  He used his own resources to leave us with this beautiful church building.

“For my part, I have done my best to keep all the renovations we have been doing, faithful to the blueprint that Father Hayes used in building this church.  In fact, we have been able to complete some things that are on that blueprint but were never done before.  So this will be the completion of his plan for this church.  He would surely be proud of that.” 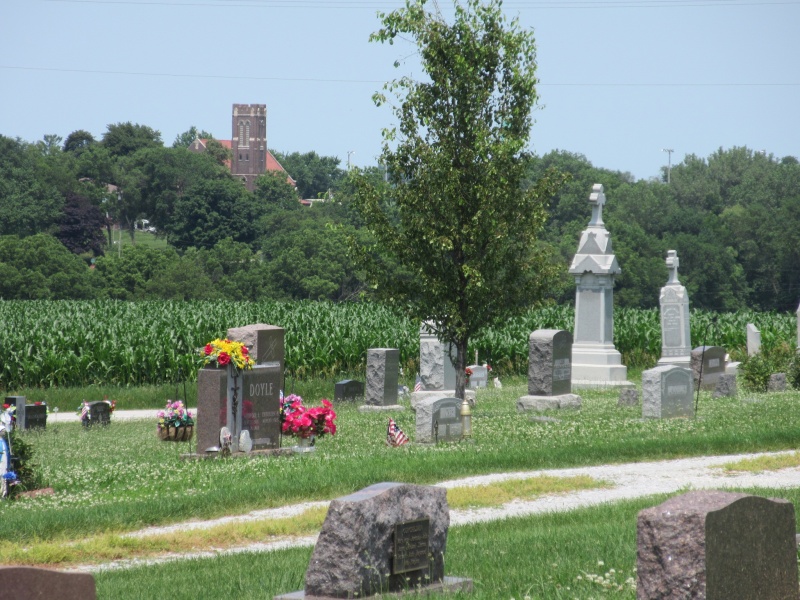 You see the bell tower of St. Patrick’s Catholic Church a half-mile north of Mount Calvary Cemetery, which the parish maintains on the south side of Imogene.

St. Patrick’s parish has a wonderful site on the Internet, where you can learn much more about its history and its people, and you can get all the details about the celebration this weekend.  You can go to that site by clicking here.  You can also visit the parish’s page on Facebook, right here.