Two bicycle rides that really mean the world to me are rolling without me, and I’m O.K. with that.

You probably know that RAGBRAI XLIII — the 43rd adventure for the Des Moines Register’s Annual Great Bicycle Ride Across Iowa — left Sioux City this morning for its 7-day cruise across north central Iowa, with a final destination of Davenport next Saturday.

Carla Offenburger and I will be AWOL from both those big rides this year, although we will closely follow both of them in both the news media and social media.  And, actually, we’ll be in Iowa City a week from now to join in a send-off for the “reunion riders.”

Why aren’t we going? 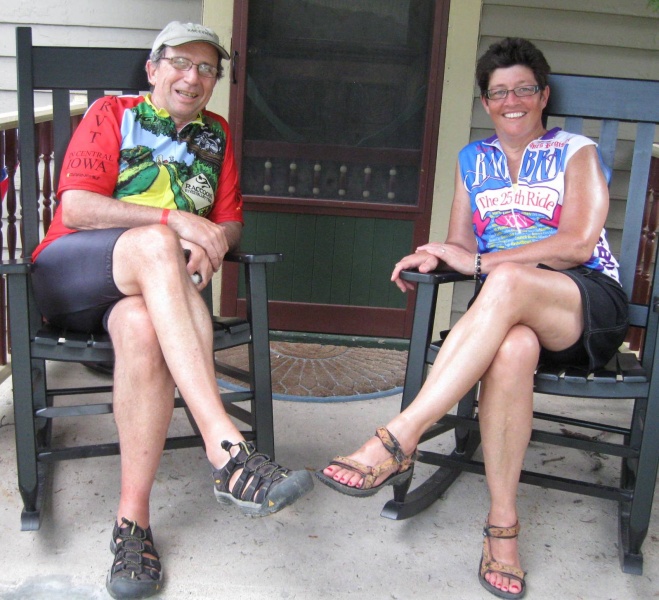 Here we Offenburgrs are on RAGBRAI in 2011, sitting on the front porch of the home of Chuck Offenburger’s Des Moines Register protégé Kyle Munson in the central Iowa town of Slater.


Your first guess is probably health, after the cancer battles we both had in 2009 and ’10.  But neither of us is having health problems, we’re grateful to report.  Both of us are still riding our bicycles — I’m grateful to report that, too.

But Carla “resigned from RAGBRAI” a couple years ago after a brutally hot day on it, saying she was going to take up quilting instead, and she certainly has done that!

My plan is to still do two or three days of RAGBRAI each summer, but a couple things made me change my mind about that right now.  First, I haven’t ridden enough this year to be really ready for RAGBRAI’s challenging days.  I figured up the other day that of all the months so far in 2015, the one in which I’ve ridden the most has been January!  It  was shockingly mild for Iowa then, and I rode about 10 days, getting a good start of about 150 miles this year.  Subsequently, we had two delightful grandparenting trips to Texas, and then a half-dozen expensive trips to Omaha to follow my Vanderbilt Commodores baseball team to their runner-up finish in the College World Series.  Those all reduced my normal time on the bike this spring and summer.

The other reason both of us are limiting our biking excursions this year is because we’re starting to plan a trip to Ireland next summer to celebrate our 25th wedding anniversary — we hope to do some bicycling over there — so we’re saving our money for that.  And, wow, wouldn’t a trip to Cuba this coming winter be grand? (Actually, it’d be a couple “grand,” for each of us, which makes it out of the question, doesn’t it?)

So my “RAGBRAI” this summer is going to be a ride of a couple days this week on our Raccoon River Valley Trail, which is just up the rise from our farmhouse.  I plan to ride to Des Moines one day, take-in an Iowa Cubs baseball game, and ride back the next day, and along the way do some unofficial judging in the RRVT Association’s “Best Pie on the RRVT” contest.  And I hope to be making two or three trips to Fort Dodge to cheer-on our Greene County High School softball team, as our girls play in the state tournament there.

I should explain a bit more about that “reunion ride” to Washington, D.C., and I hope to be writing more about it later this week and later this summer.

Back in ’95, we called our event the “Iowa 150 Bike Ride/A Sesquicentennial Expedition,” and we rode for 100 days and 5,048 miles from Long Beach, Calif., to Washington, D.C., promoting the celebration that the State of Iowa was planning for its 150th anniversary of statehood in 1996.  It was sponsored by the Des Moines Register, where I was a columnist then, and 19 other Iowa companies or organizations.  It was a $1.4 million production, if you want to call it that — and you’d be pretty accurate in doing so.  We had major “Iowa Parties” at the start in Long Beach (on board the Queen Mary, which is still docked there) and on the National Mall at the steps of the U.S. Capitol in Washington, D.C.

There have been more than a half-dozen reunions, including less formal ones during RAGBRAI most summers, generally organized by Sue Green of Cedar Falls.

Cyrena Buschmann, of Sigourney, has kept everybody in touch with each other with a printed newsletter that comes out twice a year, and she now also links everybody on an email roster, a service Clyde Franklin of Cedar Falls provided until recently.

And Lori Willert, of little Bolan near Iowa’s border with Minnesota, has organized several reunion rides.  sometimes with help from Green.  Those have included rides along the full length of the Mississippi River; then in 2009 and ’10, a major ride broken into two summers that covered the full length of the Lewis & Clark Trail, and now this big one across the eastern half of the U.S.

Carla and I said at the end of the ride in 1995 that organizing it was the best thing we’d ever done, especially in the way it created an opportunity for so many people to have the experiences we all did on what we sometimes called “The Go-Slow Tour of America.”  We had great help from lots of volunteers, most notable among them the late Don Benson, who’d been the “Wagonmaster” on the first 19 RAGRAIs and was route director for us, too.

The “Iowa 150” was a good representation of Iowa.  So is RAGBRAI.  We Offenburgers are thrilled to have been involved in both of them.

And now let’s all go have some more fun.

One thought on “Two favorite bike rides are rolling without him: What’s up with that?”