COOPER, Iowa, July 30, 2015 — For many of us who have worked for newspapers in Iowa, the Cullens of Storm Lake have become genuine heroes.

John Cullen in 1990 did what so many of us have dreamed of doing, at one time or another – starting our own newspapers. Most of us talked ourselves out of it, or were talked out of it by others. Before we made the leap, we realized we really did not want to work as hard and long as would be necessary.

But John Cullen charged ahead, founded the Storm Lake Times and became its publisher. Before long, he was joined by brother Art Cullen, who became the editor. And now the Times has not only survived 25 years – a major accomplishment for any newspaper in the era 1990-2015 – but has become one of the best small town newspapers anywhere.

I’ve loved watching all this, first from afar, then for five years as a Storm Laker myself, and for the last 11 years at a distance. 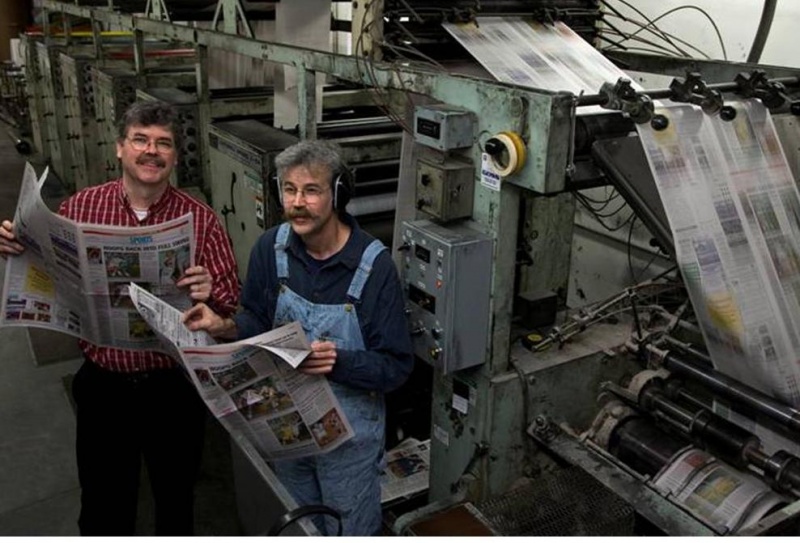 Publisher John Cullen (left) and editor Art Cullen (he’s also the pressman), shown here in 2009 at their newspaper, the Storm Lake Times, located at “Times Square,” as they call it, in the northwest Iowa town. (Photo by Gary Fandel)

Back in 1990, I was writing the “Iowa Boy” column in the Des Moines Register, roaming the state for stories about interesting characters doing interesting things. The Cullens certainly qualified, and I wrote about them and their bold, start-up newspaper right from the beginning.

In 1998 I left the Register, and in ’99, my wife Carla Offenburger and I signed on as faculty & staff members at Buena Vista University. We became good friends with the Cullen families when we lived in Storm Lake. We also subscribed to the Times. I wrote a few guest columns for them. For two years, I was faculty advisor to the BVU student newspaper, The Tack, which the Cullens printed, and so I was indirectly one of their publishing accounts.

I’ve also enjoyed watching them because they have always been real innovators. The Times was one of the first newspapers in Iowa to use digital pagination in putting the newspaper together. They were trailblazers in digital photography and extensive use of color photographs. They were one of the first Internet providers in Storm Lake. They also were early users of the ’net for news gathering purposes, and eventually launched a top-quality website and convinced people they should pay something for full access to it.

Their news coverage of Storm Lake and Buena Vista County and their editorial advocacy for the area have been exceptional. The Cullens are more liberal than I am, so occasionally I think their editorial stands are a little loony. But far more often, I see them as real prairie populists, conveying a deep understanding of agriculture, with conservative positions on most fiscal issues, liberal on most social issues.

When you think about it, the Times started up and has grown in the same 25 years in which the local population changed drastically and grew dramatically. The meatpacking industry, with a need to expand its workforce, recruited people from around the world. Before long, you could find two dozen languages being spoken in Storm Lake schools. Cultures occasionally clashed. But people began realizing that students growing up in Storm Lake had a tremendous advantage: from their diverse classmates and friends, they were learning how the world works without ever having to leave town.

In news stories, feature stories, columns and editorials, the Cullens have done a wonderful job of explaining the diversity. In doing so, they’ve helped make a new, larger community – one that is vastly different from the Storm Lake they knew back in 1990.

I’m really grateful to them for that. I’m also grateful to them for the strong stand they took on the need to dredge the lake itself, and the way they persistently pestered state and federal officials for financial support for that and for lakeshore redevelopment. I’m convinced that if it weren’t for the Cullens, there would be no King’s Pointe today and the lake would be a mess.

Finally, I’ve enjoyed watching the struggles and successes of the Cullens and the Times because 21 years before they started their newspaper, I was involved in a misguided scheme to start up a newspaper in Storm Lake.

If you know your community history, you know that the Jarnagin family for decades published the Storm Lake Pilot-Tribune, and it was highly regarded among community newspapers in the state.   For much of that same time period, the Archie family published The Evening Sentinel, the newspaper I grew up on in my hometown of Shenandoah in southwest Iowa. As I recall, my big boss back then, W.D. Archie, was a pretty good friend of W.C. Jarnagin. They came to know each other well through their service to the Iowa Newspaper Association.

In the spring of 1969, I was a senior at Vanderbilt University in Nashville, Tenn., and as our spring vacation was approaching, I got a phone call from Willard Archie in Shenandoah. He asked me what I planned to do after I got out of college, and I said first I’d have to take care of my military obligation but then I hoped to catch a newspaper job somewhere. “Well, I might have an opportunity for you to start a newspaper and run it for me,” he said. “In Storm Lake, Iowa.”

He told me a little about Storm Lake and the twice-a-week Pilot-Tribune, and said he thought that a feature-oriented newspaper that started as a weekly might be a big hit. “I want you to go up there for me as soon as you can, look it over and tell me what you think,” Archie said.

I told him there was no way I’d start up a newspaper by myself, that I’d at least want to take along Mike Kiernan, a buddy of mine at Vanderbilt who was as involved as I was in the student publications. Archie said he’d pay for the trip for the two of us, and we drove into Storm Lake in my Volkswagen. We got a fine room (not) at the old Bradford Hotel downtown, and I believe we spent a little time in its bar – was it called the “Antlers Lounge,” or something close to that?

The next day, we talked to several business people about what they thought of the Pilot-Tribune and whether they thought a new weekly feature newsapaper might be successful. By then, we even had a name for it, “Storm Lake Sunday Morning.” A few actually encouraged us, although more were skeptical.

But that evening, as we were finding a place to eat and looking around town, Storm Lake seemed almost deserted. We were puzzled by that until the next morning, when another business person told us that the previous evening, nearly everybody in town had attended a celebration of “Mr. Jarnagin’s” 90th birthday, and that he was in fact “the most revered person in Storm Lake.”

We wisely retreated from Storm Lake, heading to Shenandoah, where I told Archie that 1) I was not interested in being part of starting up a newspaper in Storm Lake, and 2) I strongly advised him against doing that with anybody else, assuring him it would be a loser.

He was a little sore at me for being so blunt in my assessment. But a couple months later, he thanked me for waving away his idea, saying he really hadn’t given it enough thought. “Bill Jarnagin and I have always been pretty good friends, but we got cross-ways with each other at a newspaper association deal, and I thought I ought to give him a little shot,” Archie said. “You made me realize it never would’ve worked.”

But that was in 1969, and the Jarnagins were in their heyday.

After 1990, it worked real well for the Cullens.