COOPER, Iowa, Aug. 3 2015 — There are more lines in their faces than there were 20 years ago, but I can see the same excitement for adventure in their eyes. About 40 people from our 1995 bicycle ride across America are now doing a reunion ride from Iowa City to Washington, D.C., and the rest of us are with them in spirit.

Two years in the planning, the “Iowa 150 Reunion Tour” left Iowa City on Monday morning, July 27, after a breakfast at the home of Ken and Sue Klein.  Ken, a retired Iowa City teacher, was among the 308 who rode on the “Iowa 150 Bike Ride/A Sesquicentennial Expedition” in 1995.  He was injured about a decade later in a fall from a horse and has been unable to ride a bicycle since then, but he continues to be a favorite of the “Iowa 150” crowd.

Carla Offenburger  and I, organizers of the 1995 ride, were in Iowa City to help cheer the riders on their way, but we’re not riding this time.  We’re saving money for other trips planned for the next year, including some bicycling in Ireland.

There are all kinds of wonderful story lines with this summer’s riders.

The oldest is Vern Terlouw, 83, a farmer from Sully who is as enthusiastic as ever about riding his bicycle.  He and a daughter rode southwestern Spain last spring, and he also rode most of RAGBRAI this summer.

The youngest riders are Sylvia Clemens, 9, and her brother Clyde Clemens, 6, of Homer, Alaska, the grandchildren of Dr. David and Kathy Bakken, of Decorah.  The Clemens children are riding with their parents Kara Bakken Clemens and David Clemens, and Grandpa David, while Grandma Kathy drives their motor home.  Meanwhile, another Bakken daughter, Anna, is doing a blog about the experience that you can access right here.

You can see two earlier columns I’ve written about the ride elsewhere on this Internet site.  And here is a link  to a story that KCRG-TV News of Cedar Rapids did as the group left Iowa City — click here.

The ride director is Lori Willert, a school teacher from Bolan in north central Iowa.  She was on the Iowa 150 ride in 1995, and has organized several other reunion rides among the group over the years.  Her daughter Kelsie Willert, who will be a St. Ansgar High School senior, is riding with her this summer.  And driving the ride’s mobile headquarters is Linda Nydegger, also of Bolan, Lori’s mother and Kelsie’s grandmother.

On the second day of the ride, the Iowa 150 Reunion Tour reached Illinois.  They spent the night in Kewanee, the hometown of legendary ultra-marathon bicyclist, the late Dr. Bob Breedlove, who was also an orthopedic surgeon in Des Moines.  Breedlove was killed in a cycling accident in 2005 during the Race Across America.  Several of this summer’s Iowa 150 cycling group visited Dr. Bob’s grave in Kewanee and also visited with his sister and twin brother.

On their fourth day out, they overnighted in Chebanse, Illinois, hometown of one of the riders, Doug Latta, who also rode in 1995.  Latta had this summer’s whole group come to his home for a fried chicken dinner.

On their sixth day of riding, the group reached Indiana and spent this past weekend, August 1-2, in the town of Peru.

They are scheduled to reach Washington, D.C., on Wednesday, Aug. 19.

You can learn more about all this in the photos and captions below here. 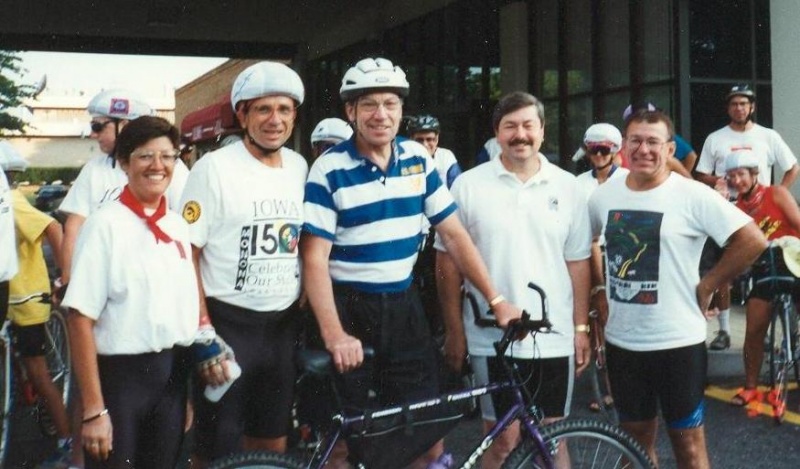 This was on the morning of the final day’s ride of the “Iowa 150 Bike Ride/A Sesquicentennial Expedition” on Labor Day weekend of 1995.  A group of 308, mostly from Iowa, had been on a 100-day adventure, with most of them riding 5,048 miles from Long Beach, California, heading to Washington, D.C.  More than 100 additional riders from Iowa joined the group for the final days of the ride, and on the very last day, there were special guests for the 26 miles from Rockville, Maryland, to the steps of the U.S. Capitol.  Here, the ride’s co-hosts Carla and Chuck Offenburger (left), welcome U.S. Senator Charles Grassley, Governor Terry Branstad and Congressman Greg Ganske.  We were awaiting the arrival of U.S. Senator Tom Harkin, who came directly from a trip to Africa to get on his bicycle with the rest of us. 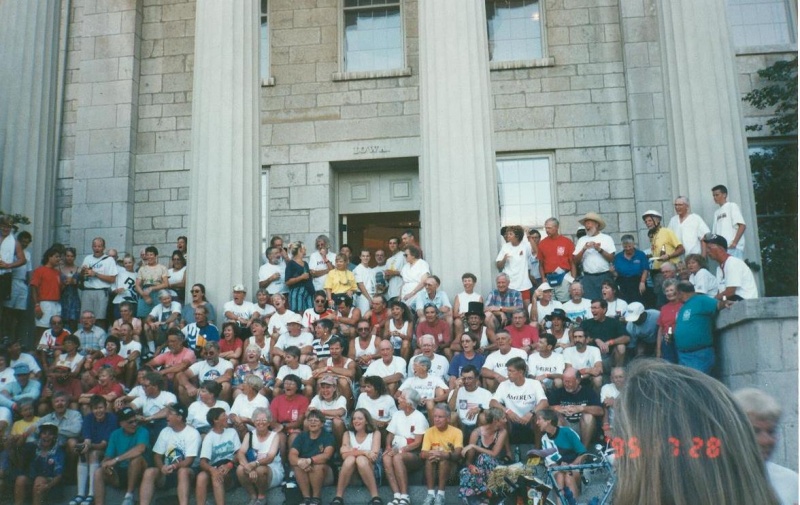 Another “throwback” photo to the 1995 ride — here the “Iowa 150” group gathered on the steps of Old Capitol in Iowa City at the end of a reception that the University of Iowa hosted for us. Right after this photo was taken, the group sang what had become their theme song on the summer-long ride, Greg Brown’s “Iowa Waltz.” 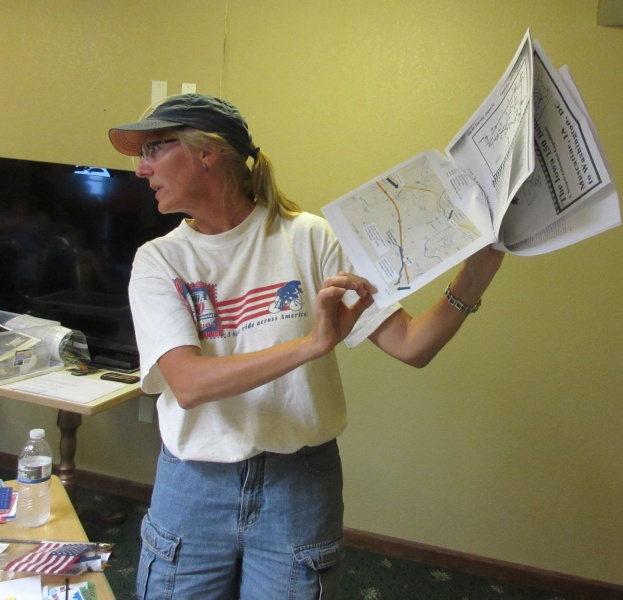 Now back to 2015.  On Sunday, July 26, about 40 people who are participating in the “Iowa 150 Reunion Tour” to Washington, D.C., gathered at their starting point in Iowa City.  At a logistics meeting that evening, ride director Lori Willert, of Bolan in north Iowa, showed the riders the new route map which will have them riding about 1,200 miles before they get to Washington, D.C., on Aug. 19. 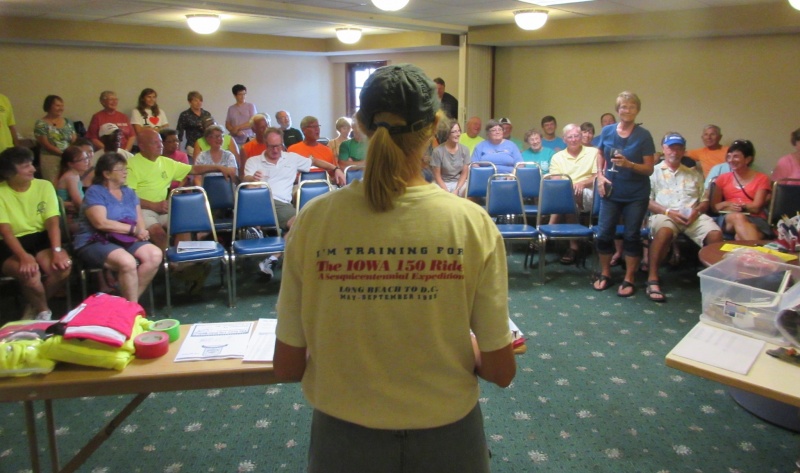 In the initial meeting of the “Iowa 150 Reunion Tour,” the riders one-by-one introduced themselves, as Kathy Mathews of West Des Moines (at the right) is doing here.  Some of the riders had not seen each other for 20 years, others have been in closer touch and have seen each other on RAGBRAIs and other bicycle rides.  Ride director Lori Willert, with her back to the camera, is wearing a T-shirt from the 1995 ride. 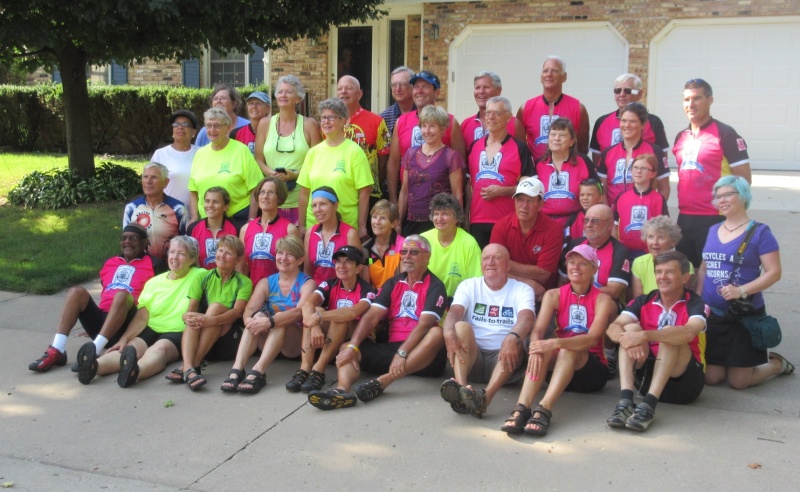 Here are the bicycle riders who left Iowa City on Monday morning, July 27, on the “Iowa 150 Reunion Tour.”  About 30 are planning to ride the entire distance to Washington, D.C., others will ride part of the route, and another dozen or so are expected to join the group in Gettysburg, Pennsulvania, to ride the last three days to the nation’s capital. 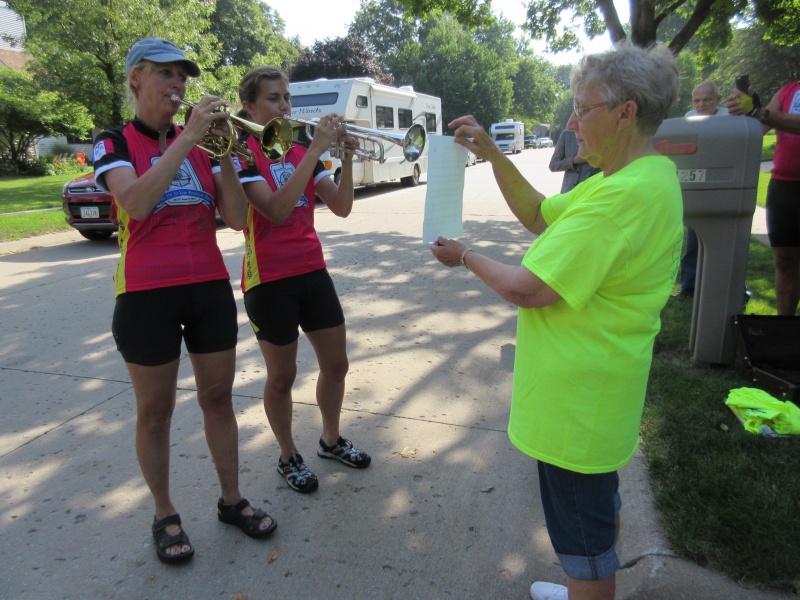 In a brief ceremony to start the “Iowa 150 Reunion Tour,” ride director Lori Willert and her daughter Kelsie Willert, 17, played the National Anthem on their trumpets — while Lori’s mother (Kelsie’s grandmother) Linda Nydegger, also of Bolan, held their sheet music. 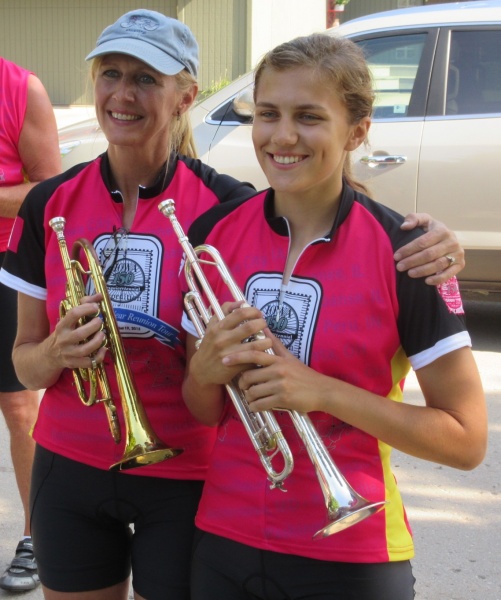 Here are the Willerts after playing the National Anthem.  Kelsie Willert will be a senior at St. Ansgar High School this fall. 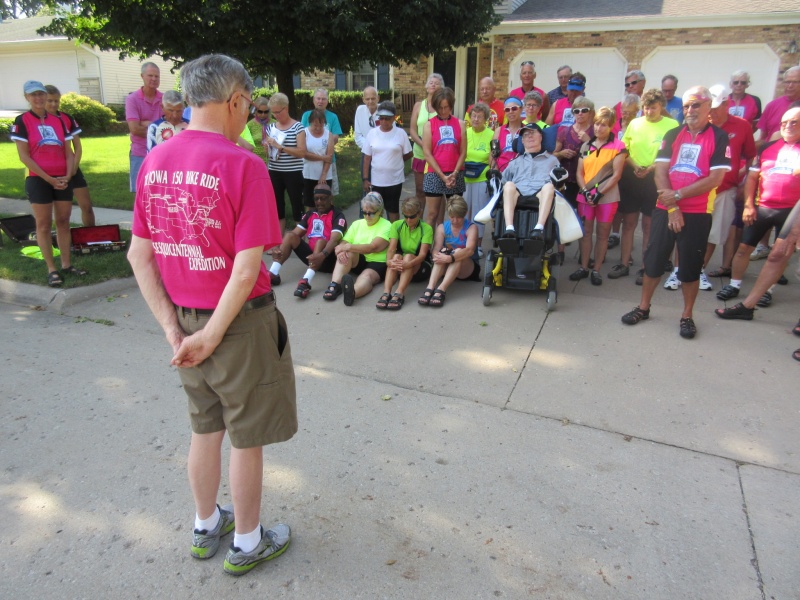 Ted Halm, of Iowa City, who rode with the group in 1995 but is not riding this summer, attended the send-off in Iowa City and led the group in prayer. 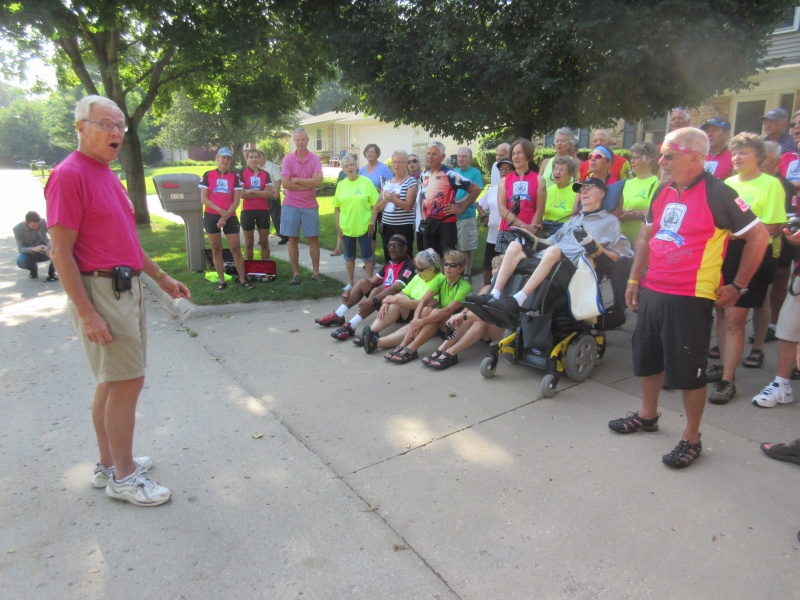 Cecil Goettsch, of West Des Moines, the group’s songmaster in 1995, was back for the send-off on July 27 and led the group in “Iowa Waltz.”  Goettsch is planning to join this summer’s tour in Gettysburg, Pennsylvania.  He rode across the U.S. last spring on a southern route, and he and another Iowa 150 alumnus Tom Schoelermann, of Des Moines, are planning an East Coast ride later this summer.  Part of that will connect them to the “Iowa 150 Reunion Tour” in Gettysburg. 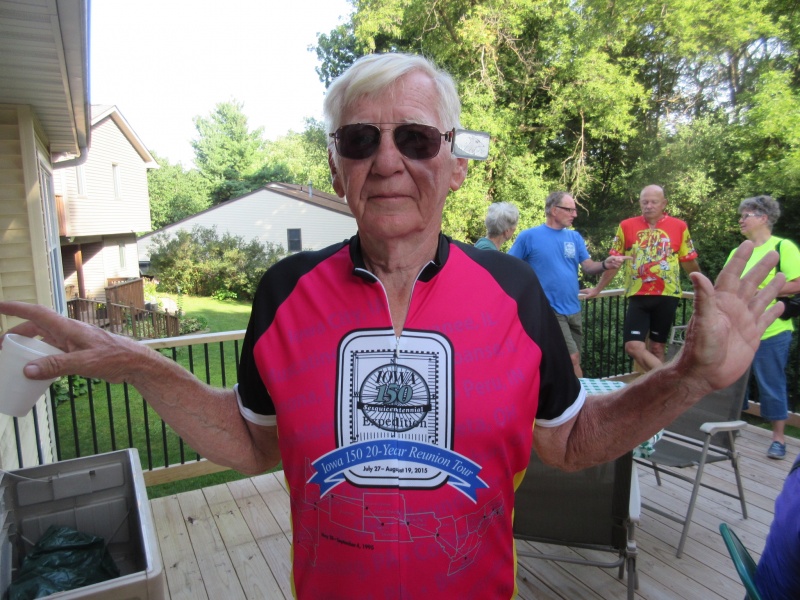 Bruce Haugen, of LeClaire, shows off the new jerseys designed for the “Iowa 150 Reunion Tour.” 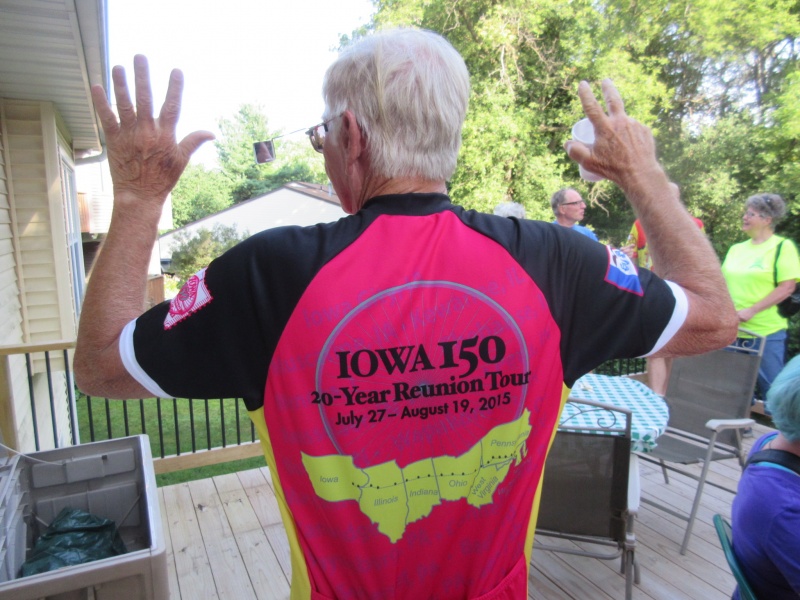 Here’s Bruce Haugen again, this time showing the backside of the jersey with the bike ride’s route. 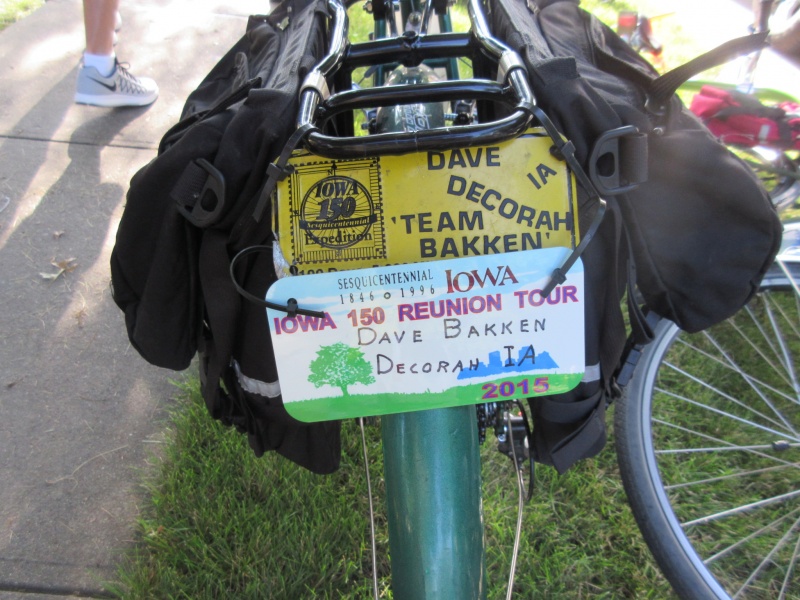 These “Iowa 150” bike rides have both had special license plates to help identify the participants.  Dr. David Bakken, of Decorah, this summer is displaying both his license plate from 1995 and the new one for this summer’s ride. 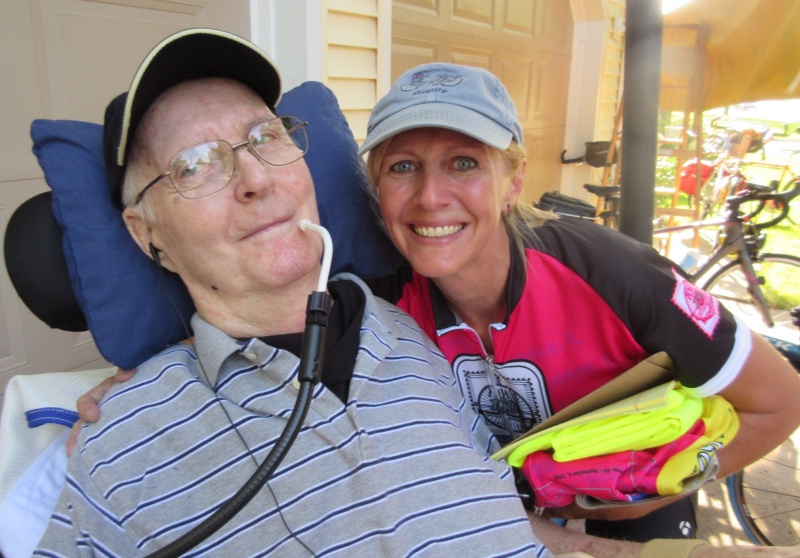 Ken Klein, of Iowa City, was one of the most popular riders on the Iowa 150 Bike Ride in 1995.  About 10 years later, he was paralyzed after falling from a horse.  Here he’s shown with Lori Willert, ride director of the Iowa 150 Reunion Tour.  Ken and his wife Sue Klein hosted a send-off breakfast at their home for all the riders. 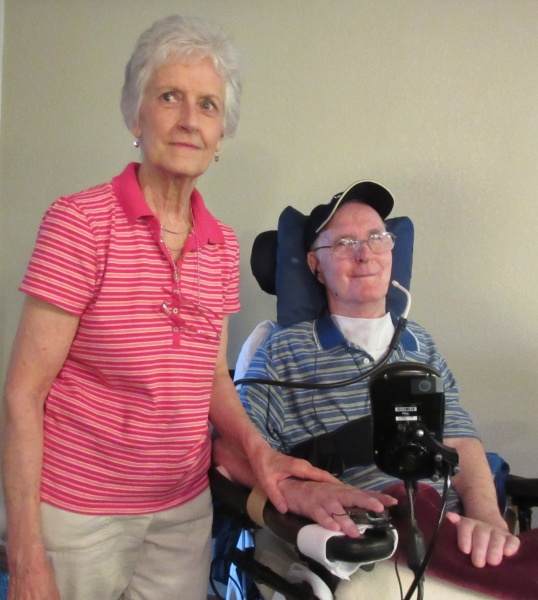 Here are Sue and Ken Klein at the Iowa 150 Reunion Tour’s logistics meeting Sunday night, July 26.  Then they hurried home to complete arrangements for the send-off breakfast they held for the bike riders on Monday morning. 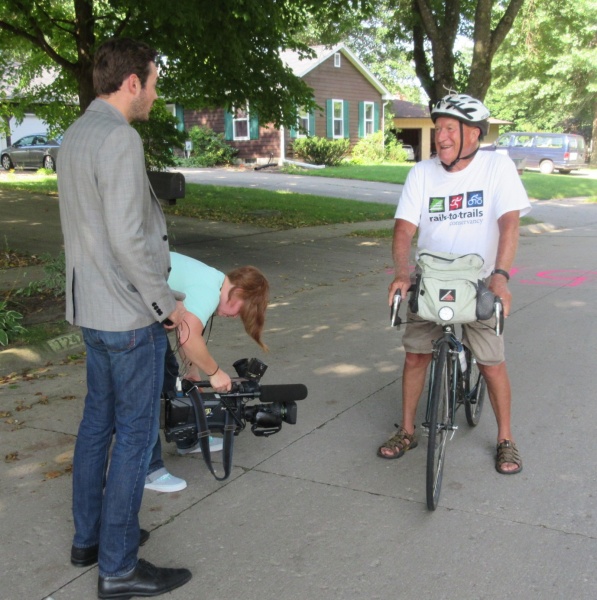 Vern Terlouw, a farmer from Sully, at 83 is the oldest of the bicycle riders on the Iowa 150 Reunion Tour.  Terlouw is a veteran rider who this past spring, rode the southwest of Spain with his daughter, and he rode most of RAGBRAI this summer, too.  Here, just before he was leaving Iowa City, he was interviewed by a team from KCRG-TV from Cedar Rapids. 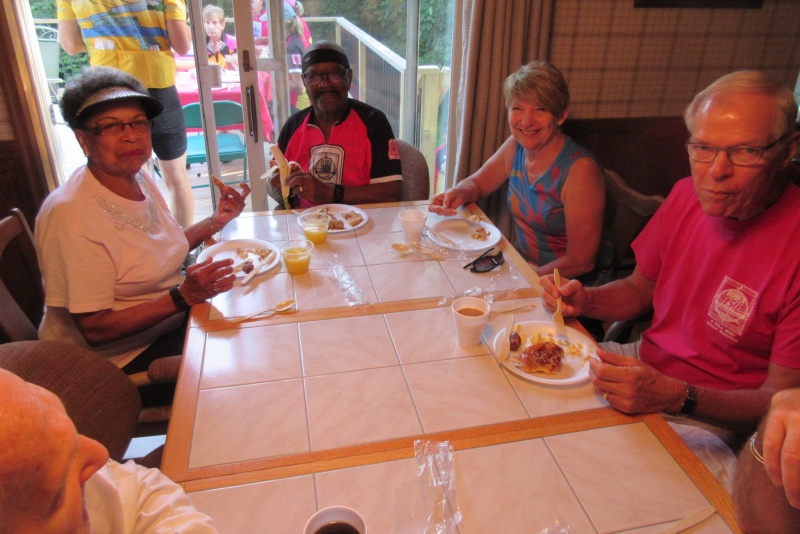 Shown at breakfast at the Klein home in Iowa City are Betty and Frank Smith, of Waverly; Kathy Folkmann, of Williamsburg, and Cecil Goettsch of the Des Moines area. 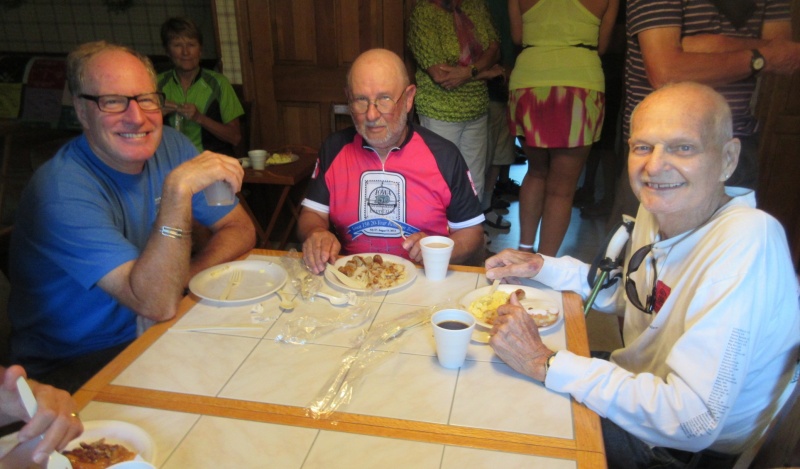 Also at the breakfast were (left to right) Tom Schoelermann, of Des Moines; Phil Muta, of Newton, and Don Koch, of Iowa City.  Muta plans to ride all the way to Washington, D.C.  Koch couldn’t ride this year but said he’ll be cheering the riders all the way there. 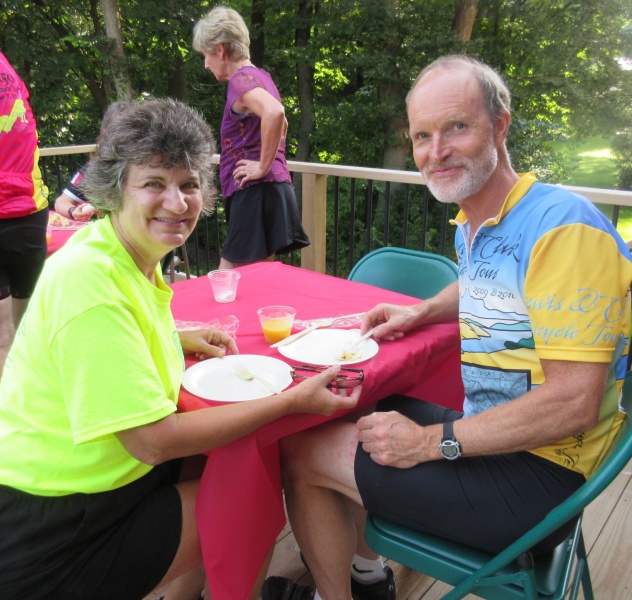 Sue and Jerry Green, of Cedar Falls, plan to do most of the ride.  Sue Green has been the planner of most of the half-dozen or so Iowa 150 reunions that have been held over the years.  Lori Willert has planned the larger reunion bike rides that have been held — including one the full length of the Mississippi River and another that followed the entire route of the Lewis & Clark Expedition, with that one being broken into two rides over successive summers. 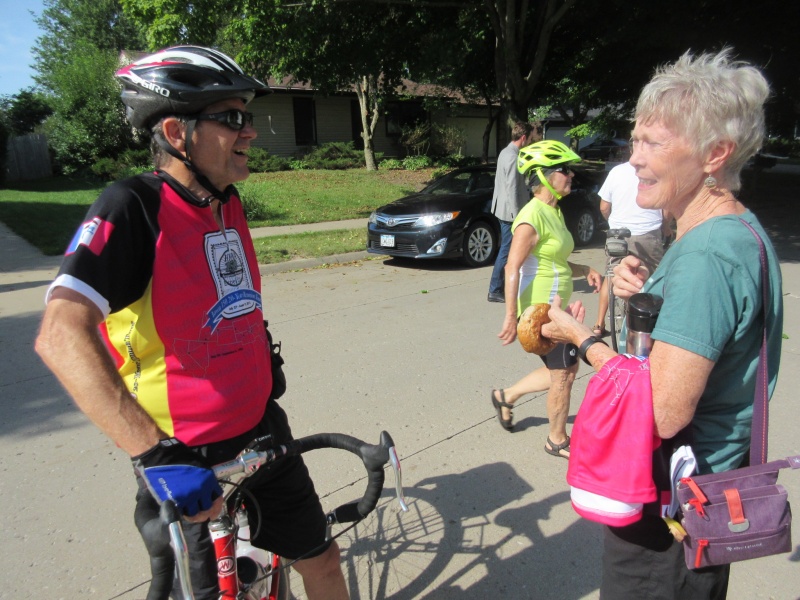 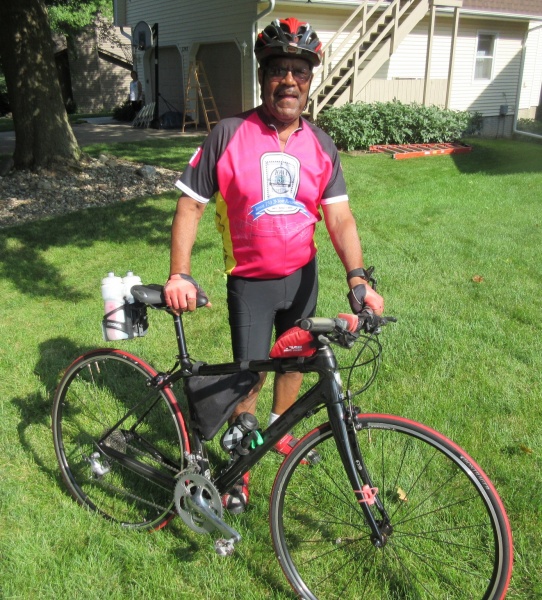 Frank Smith, of Waverly, is shown here as he was ready to start the ride to Washington, D.C. 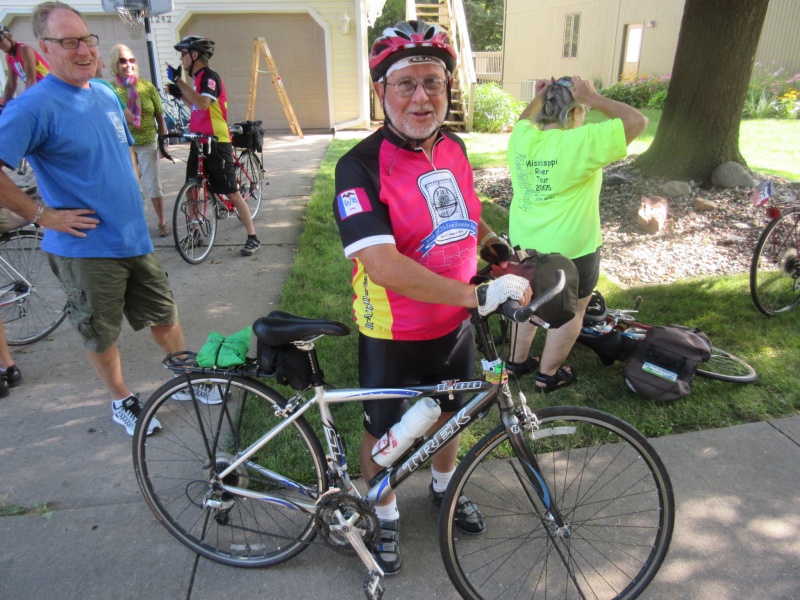 Phil Muta, of Newton, joked that the reason he’s doing the Iowa 150 Reunion Ride, is “that a lot of people at home wanted to get me out of town.” 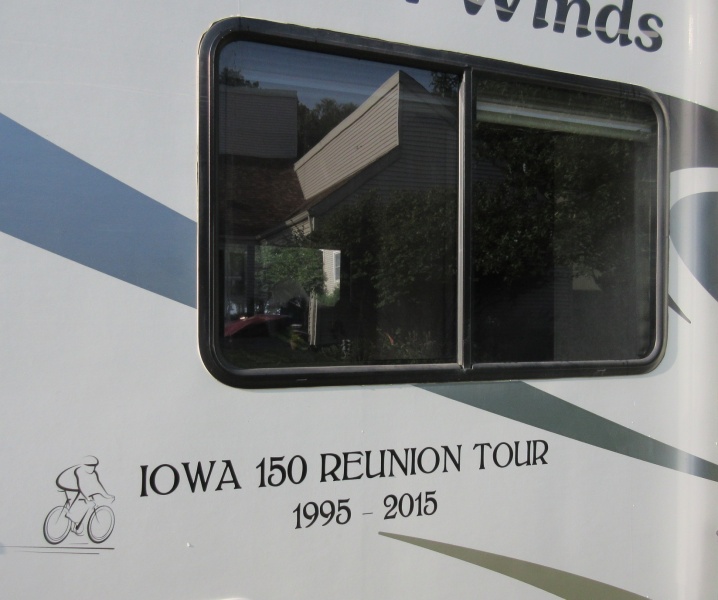 The rolling headquarters of the Iowa 150 Reunion Tour is the motor home that Linda Nydegger, of Bolan, is driving for her daughter Lori Willert, the ride director, and Lori’s daughter Kelsie Willert.