DES MOINES, Iowa, June 13, 2019 — If you’ve thought that U.S. policy toward our neighboring nation of Cuba couldn’t get much worse, you’re not thinking big enough.

“Some people look at just Cuba,” said Rev. Luis Barrios, who’s been studying and traveling the region for more than 45 of his 66 years. “But you also have to look at what’s going on in Venezuela, and Nicaragua, and my home country of Puerto Rico.  The Trump administration has come out with a very strong program for the re-colonization of Latin America.”

What?  More important, why?

“All these countries are going to the left,” Barrios told me. “This administration is panicky, thinking that they have to reclaim Latin America. And so they are using an imperialist and capitalist agenda. With the exception of the last two years of the Obama administration, the U.S. has always tried to dominate and control these countries.  With the current administration, it became more intense. They’re pushing the Monroe Doctrine and Manifest Destiny again, like they want to take over these countries.” 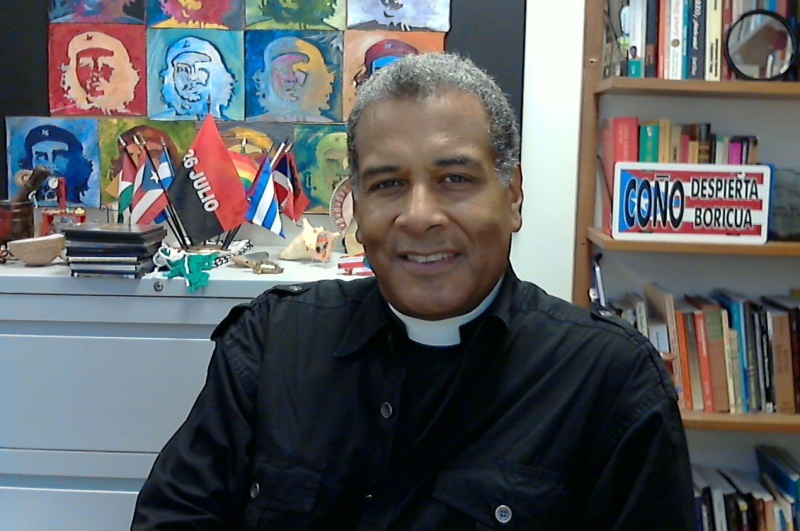 
Barrios, long-since an American citizen who lives in New York City, is an Episcopal priest and pastor of the Holyrood Church of Santa Cruz in the Washington Heights neighborhood on the upper west side of Manhattan.  He is also an acclaimed professor of psychology, criminal justice, Latin American and other ethnic studies at John Jay College of Criminal Justice in the City University of New York system.

But the main reason I chased him down by phone this week is because he is also president of the board of the Interreligious  Foundation for Community Organization (IFCO) and its “Pastors for Peace” affiliate, which are headquartered in New York City.  For 50 years, those organizations have been coordinating mission work by American churches of many denominations to serve and advocate for the world’s poor and oppressed.

And “Pastors for Peace” has won international praise and support for its decades of active opposition to the 61-year-old U.S. blockade of Cuba. Specifically, they’ve delivered tons of humanitarian aid to people, churches and social assistance organizations in Cuba, and they strongly advocate for ending travel restrictions between the two countries..

Barrios is speaking here in Des Moines this Saturday evening, June 15, at Plymouth Congregational United Church of Christ at 42nd Street & Ingersoll Avenue. Plymouth’s informal (and actually very fun) Saturday evening service is at 5:30 p.m. in the Greenwood Room on the south side of the church’s main floor.  Afterward, Barrios will speak about U.S. relations with Cuba and answer questions in a 6:45 p.m. program in that same room as the service.

His visit is co-sponsored here by Plymouth’s Cuba Partnership Team and the church’s Peace Committee.

The public is welcome and admission is free, although donations are encouraged for the continuing work of Pastors for Peace.  That organization has 37 people from across the U.S. and beyond going on its 30th “Friendshipment Caravan” to Cuba June 22-July 5. Barrios and other officials of “Pastors for Peace” are fanning out across the U.S. for two weeks, presenting programs and asking for support in about 40 different cities.

“I think you’re going to find Father Luis (Barrios) to be a very charismatic speaker,” said John Waller, program coordinator for the friendshipment caravans of Pastors for Peace. “He always has strong content and strong style when he speaks.”

My wife Carla Offenburger and I are active members of the Cuba Partnership at Plymouth, and we traveled on the third delegation to Cuba in late March and early April of 2017.

That was a highlight of a lifetime of interest I’ve had in Cuba, going back to the 1950s when I can remember wealthier people in my hometown of Shenandoah in southwest Iowa would sometimes travel to Cuba on vacations.  The Cuban revolution happened in my junior high and high school years, and for several years the Castro brothers, Che Guevara, Camilo Cienfuegos and other Cuban leaders — most of them in their 20s and 30s — were considered folk heroes and celebrities by young people around the world, including many of us in the U.S.

They initially called themselves “socialists” and wanted to end exploitation of Cuban workers by companies from “imperialist” nations. Their goal was free healthcare, universal free education, banishing or suppressing religion and new international alliances with nations that had strong workers’ movements.  From the mid 1960s into the early ’70s, the leaders began identifying themselves as “communists,” and Cuba strengthened its ties to the old Soviet Union, which became Cuba’s major supplier of oil, manufactured goods, food, military equipment, construction and more. And, in that Cold War era, that brought on strong isolation of Cuba by the U.S. — including the blockade or “embargo” as it is also called.

By almost any measure, the blockade has been a failure.  It certainly did not stop the revolution or bring on regime change later in Cuba. Today, most Americans are unaware it’s still a thing. Most agricultural and business interests across the U.S. are in favor of ending the embargo and normalizing trade and travel. Ditto for major U.S. church denominations, including the United Church of Christ, of which Plymouth Congregational in Des Moines is a large and influential member.

But after Pope Francis in 2014 persuaded Presidents Barack Obama and Raul Castro to ease restrictions on travel and trade between the nations — and sparked global hope for normalization of relations — there was regime change in the U.S.

New President Donald Trump has re-imposed earlier restrictions and imposed some new ones.

Barrios said, from the Cubans’ perspective, Obama was only a little better toward Cuba than Trump is. “Both have always wanted to end the Cuba revolution,” despite the fact it happened more than a half-century ago. “The big difference between them — Obama was quieter and more diplomatic, Trump makes a lot of noise.”

“Cuba, in all that time, fits the description I learned from Fidel Castro himself,” said Barrios. “He often said, ‘Cuba is not a paradise, neither is it Hell.’ This is a revolution in motion.  These people, in the face of all the atrocities inflicted on them by one of the most powerful nations in the world, are re-inventing themselves every day.”

He sees “significant changes coming” under new President Miguel Diaz-Canel, 59, who took office a year ago.  There is a new constitution, drafted and approved by the people in an amazingly public process. “It’s very interesting, in that they are not compromising the socialist project,” Barrios said. “They are recognizing the need of people to survive,” with major investments for education, medical services, public safety, technology and infrastructure.

“When we were arguing against the blockade, we always used to say, ‘Cuba is no threat to the U.S.’,” Barrios said. “But now, we are seeing how Cuba actually is a threat to the U.S.  Our American people see these things that Cuba’s people have — free education, free medical care, and more — and we hear our people saying, ‘Why don’t we have these things in the States?'”