SHENANDOAH, Iowa, May 22, 2019 — The biggest lesson of the Donald Trump presidency is surely this: A person who almost nobody thinks can be elected president of the United States can indeed win the highest office in the land.

That is one of several reasons no one should be underestimating the candidacy of John Delaney or any of the others in the crowded field of Democrats seeking their party’s nomination.

Delaney, a highly-successful businessman and then a three-term member of the U.S. House from Maryland, told us Tuesday at his meet & greet here in my old hometown in southwest Iowa that there are now 24 Democrats in the race. The crowd gasped. “You people in Iowa have a whole lot of work to do,” Delaney then said. The Iowa Caucuses are set for next Feb. 3. 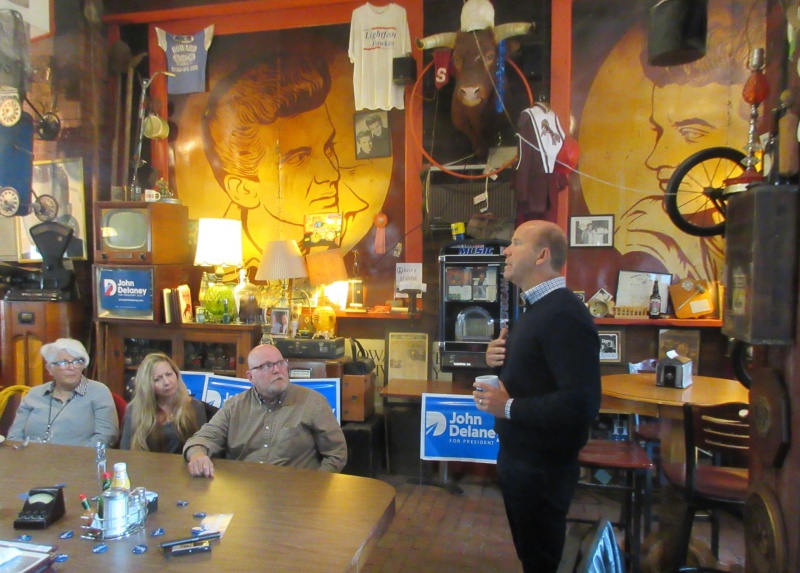 John Delaney speaking at the Depot Deli in Shenandoah, hometown of the Everly Brothers, who are shown in the big panels on the wall, memorabilia from their big homecoming concert in 1986 in Shenandoah.  They were charter members of the National Rock ‘n’ Roll Hall of Fame.  Delaney explained he’s a rock ‘n’ roll fan himself, having attended more than 30 Bruce Springsteen concerts.  Why Springsteen? “I grew up in New Jersey,” Delaney said. “Back when I was in high school and college, he was still playing a lot of bars around Jersey.  You could see him in places just like this.”

So I started immediately doing my share of our work winnowing the field.  When Delaney called on me, I pointed out that my pal Art Cullen, the Pulitzer Prize winning editor of the Storm Lake Times in northwest Iowa, just pointed out that the three supposed front-runners in the Democratic race are Joe Biden, who is 76; Bernie Sanders, 77, and Elizabeth Warren, 69.  “Art thinks those three are all too old, and so do I,” I said. “And we’re old men saying that.”  I’m 71, Kid Cullen just turned 65.  “Do you think those ‘front-runners’ are too old, too?” I asked.

“Well, I just turned 56, but I don’t think age is what people should vote on,” Delaney said. “I think we make a mistake in generalizing about these things.  I really think you should judge these candidates on what they stand for rather that some superficial categorization of us.”  He did say, though, that he’s “not sure it makes sense” to advance a nominee with a 40-year political record for Republicans and an incumbent president to pick apart and use for attacks. 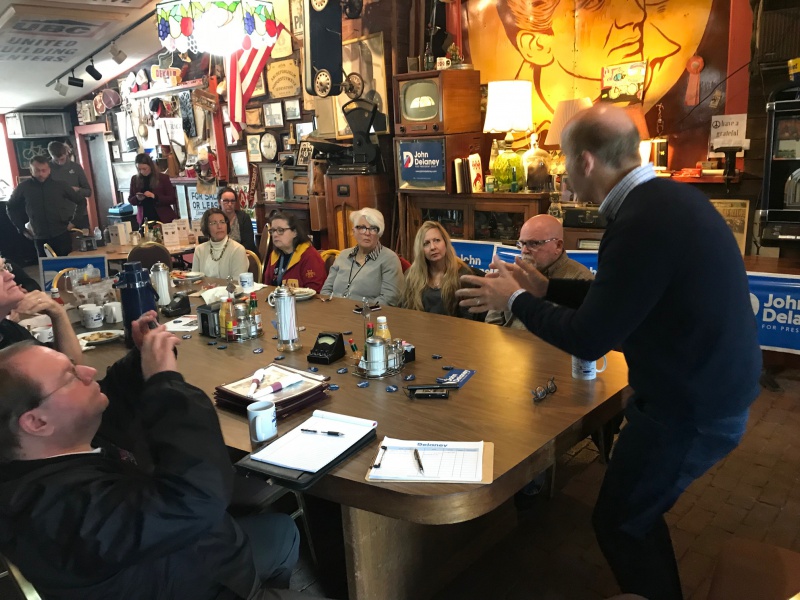 Delaney getting to it in Shenandoah. At the left front is Mike Peterson, news director of KMA radio and www.kmaland.com in Shenandoah, getting a photo.


He said the race will then be decided by those in the center — including independents and disenchanted Republicans.  Delaney, who is regarded as a “centrist” or “moderate” Democrat and was once rated the “most-bipartisan member of the House,” says he’s the candidate that can win those voters.  “I’ll win the center,” he said. “You know what the center is looking for? They want to put the country ahead of party.”  He repeated a line that drives his campaign: “In many ways the biggest issue in the country is how divided we are.”

I appealed for a follow-up question, and he told me to proceed. 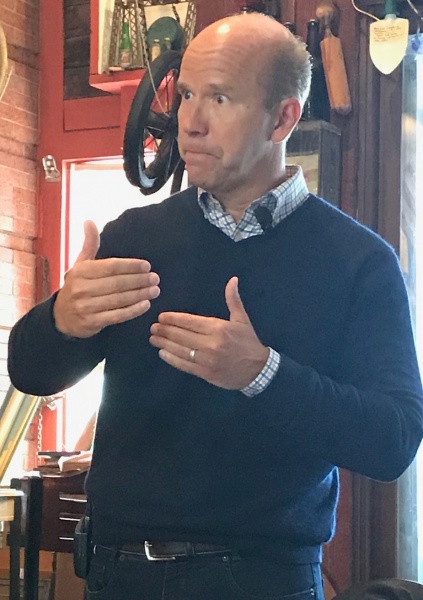 It was like Delaney, who is really very mild-mannered and never profane, just popped.

“Every day of the week!” he said in his biggest voice of the afternoon. “I will kick his ass!”

The crowd gasped again, and so did I.  You go, John Delaney!

Of course, before he gets a chance at the President’s back side, he’s got to beat almost two dozen Democrats who are also running.  And that takes good ideas, money, energy and strong fieldwork, especially in Iowa.  I think Delaney has all four.

There was a time when he was the front-runner, sort of.

That was back in late July, 2017, when he was the first person to announce he would run for president in the 2020 cycle.  He showed up 10 days later at the Iowa State Fair, and he’s spent oodles of time here since then. He’s the only candidate who has already campaigned in all 99 Iowa counties.  In fact, he’s now making his second and third visits in many of them.

And here’s something I noticed Tuesday.  His visits are generally at meet & greets that his campaign has asked the county Democratic parties to organize.  About 20 Page County Democrats showed up at  12 noon at the Depot Deli in Shenandoah, and about the same number of Montgomery County Democrats turned out for him at 3 p.m. at the Firehouse Restaurant in Red Oak.  Most of the people in both crowds had met and visited previously with Delaney.  Don’t underestimate what a boost that kind of familiarity can be at Caucus time. 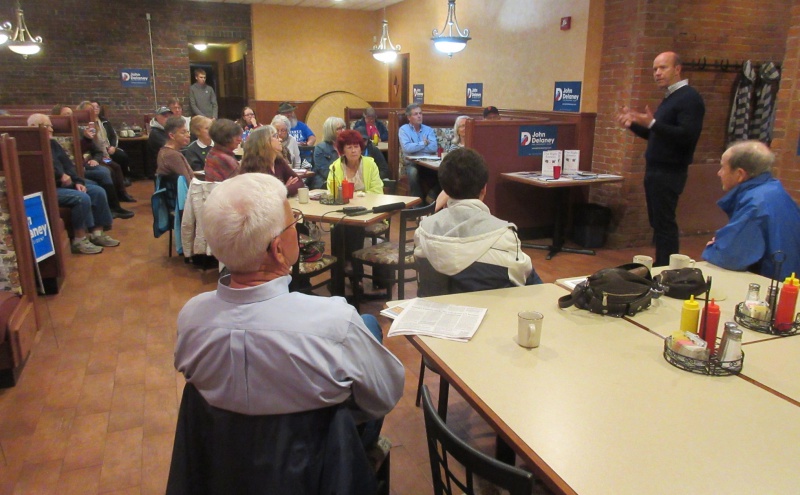 Delaney speaking at the Firehouse Restaurant in Red Oak.

That’s not happenstance, it’s strategy.  Later Tuesday, a young Delaney staff member Gregory T. Christensen tweeted, “The key to winning the #IACaucus is showing up. That’s how we win…by going to small towns in small counties as often as the big cities. Y’all, #Democrats are everywhere — we  should be too.”

Delaney’s  wife April is a lawyer who ran her own company advocating and teaching social media literacy for children. A decade ago, after both of them had been successful in business, “we decided to dedicate the rest of our lives to public service,” John said.

They have four daughters Summer, Brooke, Lily, and Grace who range in age from 24 to 10.  Their home is in Montgomery County, Maryland, just north of the Washington, D.C., metro area.

April has been in Iowa a few times, but I don’t think the kids have.  They look like a fetching bunch, from photos I’ve seen. They ought to all be here this summer, working parades, the State Fair and other attractions.  If they meet the people of Iowa well, then John’s deal-closer gets simple: “I’m with them!” 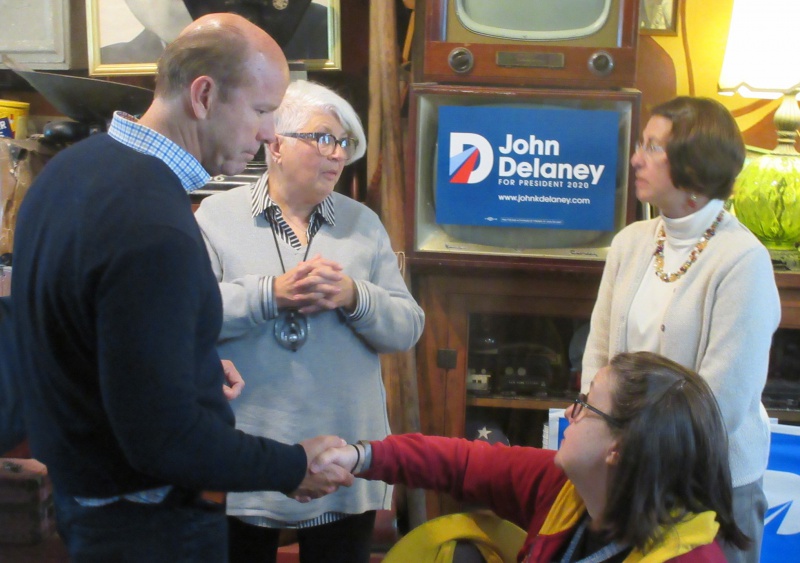 In Shenandoah, Delaney meeting Martha Jackson (foreground), of Tabor, and in the back are Anne Travis (left), of Sidney, and Heidi Carter, of Clarinda.

You can read an earlier column from Chuck Offenburger about the candidacy of John Delaney by clicking right here.