OMAHA, Nebraska, June 16, 2019 — My friend of long standing (I think 50-plus years qualifies as “long standing,” right?), Chuck Offenburger, has graciously invited me to report my thoughts as I follow our “VandyBoys” competing for the NCAA Division I baseball championship in the College World Series now underway here.

To be asked to do some reporting by the guy known for years as the Iowa Boy, the state’s premier feature columnist, was quite a thrill and I am honored to do so. I was a year ahead of Chuck at Vanderbilt University in Nashville, and therefore was privileged to watch the beginning of his journalistic career back in the day. He was a star then and a star all those years at the Des Moines Register.

My fascination with sports in general and baseball in particular goes back to playing junior baseball during summers in Spring Valley, New York, in the mid-1950s. (I told you I was a senior fan). I was not terribly accomplished, but I loved it, played through junior high schooI and was student manager for our high school team. 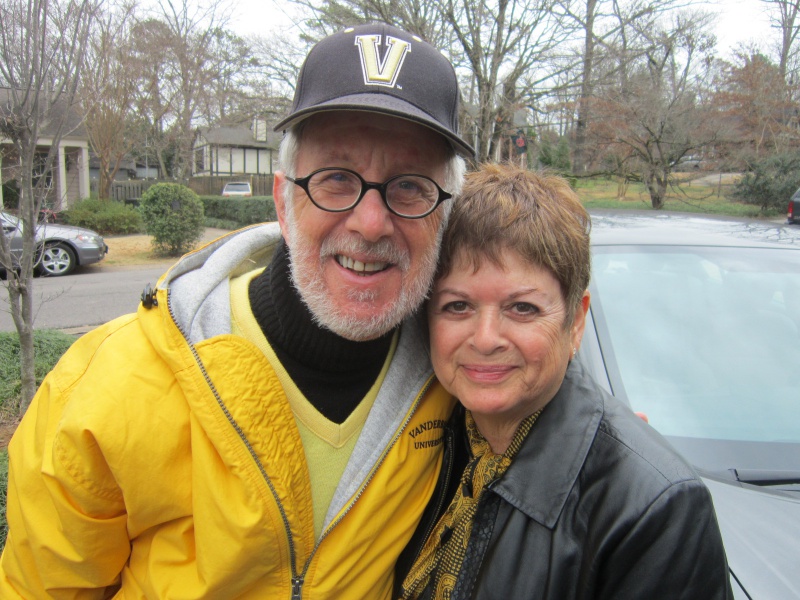 Vandy fans — Paul Kurtz, author of this guest column, and his wife Carol, who live in Athens, Ga.

It was and remains my favorite sport and the one about which I am most knowledgeable. I began what I thought would be a career as a sportswriter by serving a couple of years as sports editor of the Spring Valley Tiger, my high school newspaper. Also, during high school and in the summers, I worked on the sports desk of a local newspaper writing stories about youth baseball and softball taken from information phoned in by stringers.

This background served me well as I began work as a freshman on Vanderbilt’s student newspaper, the Hustler, where I met Chuck on his arrival during my sophomore year. Serving as sports editor during my junior and senior years, I covered and wrote columns about some very good basketball teams and some not very good football teams.

While journalists are expected to be neutral, there’s an unwritten exception for sportswriters (especially at the college level) and, therefore, in 1964 I began what is now a 55-year stint as a Vanderbilt sports fan.

While on the road to becoming a professional sportswriter, I was sidetracked into a 38-year vocation as a law professor at the University of Georgia. And sports, especially Vandy sports, became a very special avocation. Through moves from Nashville to Cambridge, Mass. and then Athens, Ga., I have always rooted hard for my alma mater. When possible, I return to campus in Nashville for Homecoming football games, attend a basketball game there or in Athens and the occasional football bowl game.

But about a dozen years ago I fell in love with Vanderbilt baseball.

How did that happen all of a sudden, 40 years after I completed my college work at Vanderbilt?
Hard to parse it out because I didn’t realize I was falling in love at the time. 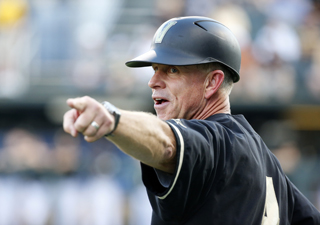 In the picture at the right is Vanderbilt baseball coach Tim Corbin. (Photo from vucommodores.com)

As I remember it, I read several pieces in Vanderbilt alumni magazines about our new and very successful baseball coach. From 2003 through 2007, Tim Corbin had led his team to a won-loss record of 198-108. While that doesn’t sound like the four-year football record of Alabama or Clemson or the University of Nebraska here during the Bob Devaney era, compare that .600-plus record with the Vandy baseball team’s 25-57 record during my four years of college (which may explain why I attended relatively few games during college; baseball just wasn’t taken very seriously then by either the school or the student body). Or, consider its five-year record of 116-152 immediately before Coach Corbin’s arrival in 2003 from his position as an assistant at Clemson.

During his first five years in Nashville, Corbin’s “VandyBoys,” as they were becoming known, had gone to a NCAA Super Regional (one step removed from the College World Series) in 2004. And in 2007, they won the Southeastern Conference regular season title, the SEC tournament title and advanced to an NCAA Regional Tournament .

Just for the record, going into this year’s College World Series, Corbs’ record with the Commodores is 731-352, a sizzling winning percentage of .674. He also has won SEC Coach of the Year in three different years and National Coach of the Year in two years, with the award not yet announced for this year. It’s pretty clear that Vanderbilt has one of the very best college baseball coaches in the country.

This all had happened in what is generally regarded as the best college baseball conference in the country (note that four of the eight teams at the CWS in Omaha this week are from the SEC). So it seemed like I needed to at least look into baseball at my alma mater.

And that’s when my belated attachment to our baseball team and its new leader began. What have I done which demonstrates my fanhood in the years since?

To begin with, I started keeping up with the Vanderbilt games online and listening to Joe Fisher, “The Voice of the Commodores,” every chance I got. For example, several weeks ago I had him in my blue-toothed hearing aids (another aspect of being a “senior fan”) listening during a wedding cocktail party as Vandy made its incredible comeback against Ole Miss to win the SEC tournament championship.

I also discovered that many of our team’s games were on TV on one of the many sports networks. What I do most often is mute the TV sound and listen to Fisher, who, while an excellent and knowledgeable professional, is perfect for a fan – “a homer.” Remember, “fan” is short for “fanatic.” 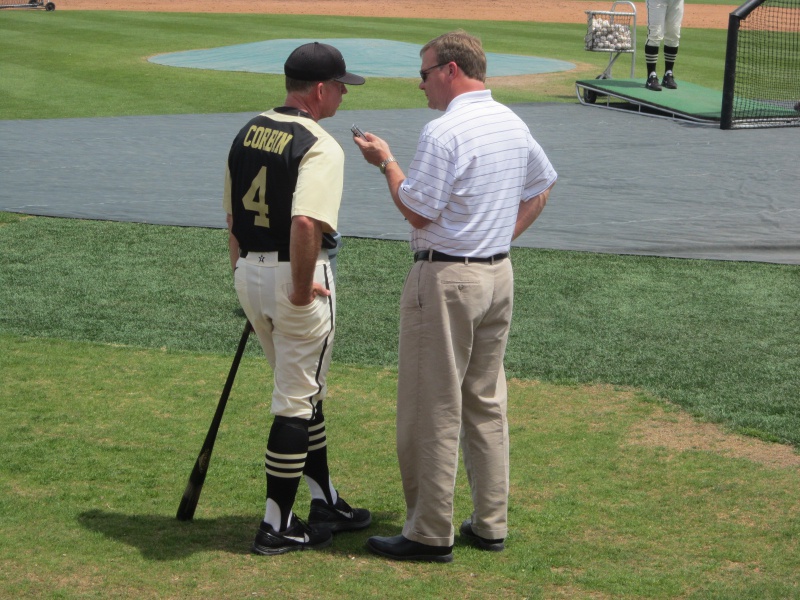 Vanderbilt skipper Tim Corbin being interviewed pre-game by “The Voice of the Commodores” Joe Fisher at a game at the University of Missouri in 2014.

Of course, watching the team in person is the classic measure of being a fan. While living in Athens, Ga., which is about five hours away from Nashville, makes attendance at Vandy’s Hawkins Field a bit difficult, I have watched the VandyBoys whenever I can. My wife Carol and I travelled to Clemson two years in a row (in 2017 and 2018) to observe their victories in NCAA Regional Tournament games, and to Hoover, Al., four or five times to follow the ‘Dores in the SEC annual tournament. When we do the latter we hang with another Hustler alum, Caryl Privett, who was a couple of years behind me in school and lives in that Birmingham metro area. And in alternate years when Vanderbilt plays Georgia in Athens, we are there rooting for our guys for every game. In the most recent Athens series between the two teams, we even got to meet the colorful Joe Fisher in person.

What has my attachment to Vanderbilt baseball brought me?

Reconnection with a number of Vandy classmates and schoolmates, primarily through Douglas T. Bates III, of Centerville, Tenn., and his Vandy sports list. Doug was a year behind me in college and Chuck Offenburger’s best friend, then and now. Doug has created an email list of some 40 to 50 Vanderbilt sports fans who regularly discuss all kinds of issues and current events involving all Commodore sports, including football, basketball, golf, tennis and, of course, baseball. Doug invited me to join the list a number of years ago and it has been a wonderful experience. Many of the members of the list are people I knew a long time ago and who I have “re-united” with over the ether. Additionally, there are folks who I knew glancingly who have become true friends and some I didn’t know at all who have become friends through this list.

From my perspective, each of these new connections, whether in person at a Vandy game or other event or by phone or via an email exchange, has cemented my long-standing relationship with and affection for my alma mater. Every time we are together, I am reminded of my time in college all those years ago. 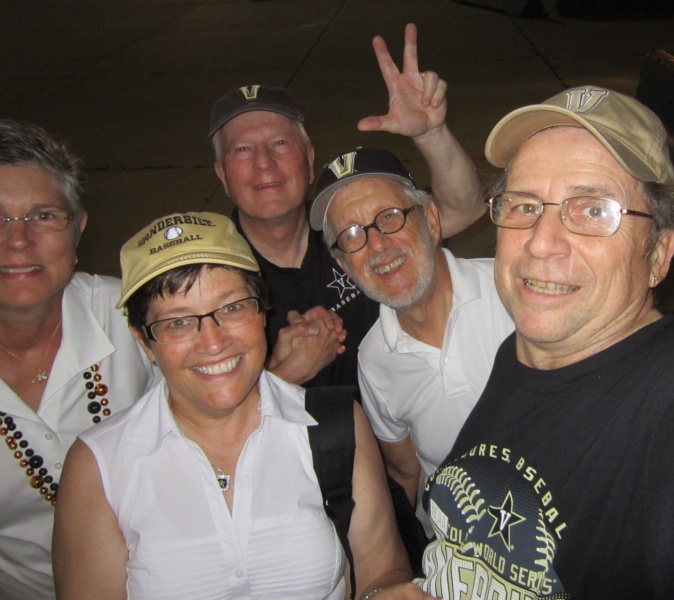 Happy Vandy fans together after a big win during the 2014 College World Series.

The highlight of my time as a Vanderbilt baseball fan has been attendance at two (and now three) College World Series where the Black & Gold have competed for the national championship of Division I NCAA baseball. In 2014, we won the title in a three-game series against the University of Virginia. In the following year, we came up one game short against Virginia and finished second. And, as I write this, we are waiting to watch the VandyBoys begin another attempt to win it all.

In each of my prior visits to Omaha, I have instinctively lapsed back into sportswriting mode to write lengthy emails to my colleagues on the Vandy sports list which are designed to supplement their watching or listening to the games involving our Commodores. There seems to be an implicit agreement between me and the rest of the list. I make believe I’m a sportswriter and they make believe they are reading my “columns.”

It was 50 years ago that Chuck Offenburger graduated from Vanderbilt, and 51 years ago, I did. Had we had a discussion back then that in 2014, a Commodore team would win a national sports championship and that we would be in the stands to observe it, each of us would’ve sought medical help for the other. But that championship indeed happened five years ago in Omaha, and now I am back hoping to watch a repeat. 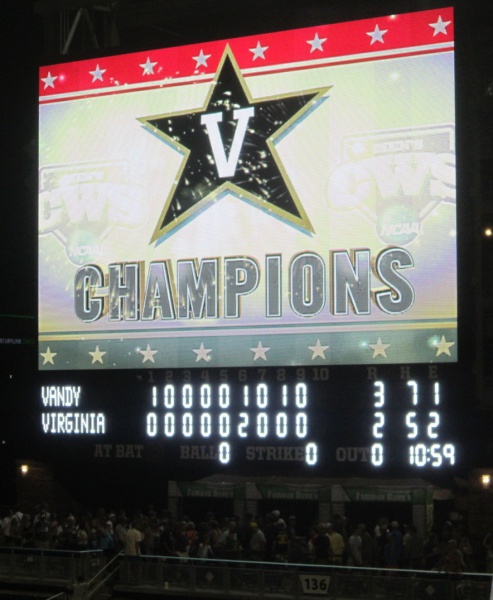 The scoreboard at TD Ameritrade Park in Omaha on the late-June night in 2014 when Vanderbilt won the College World Series and thus the NCAA Division I baseball national championship.

You can write Paul Kurtz, the author of this guest column, by email at pmkurtz@uga.edu, or by using the handy form below here.