PERRY, Iowa, Nov. 4, 2013 — It’s going to be a great week here with the re-opening of the Hotel Pattee, scheduled for today, and then the annual “Art on the Prairie” festival this coming weekend, Nov. 9-10, bringing more than 100 artists to the community to show and perform.

I’ve had a chance to meet the hotel’s new owners Jay and Denise Hartz, who have moved from the St. Louis area, and am impressed with their experience, energy, ideas and abilities to attract essential investment partners.  I’m also fondly recalling Roberta Green Ahmanson, the Perry native who saved the hotel in the 1990s and gave it the many touches of class the new owners hope to restore.

The Hartzes, who are in their 40s, are moving into Perry full-time with their two high school-aged daughters, who have been helping with the hotel clean-up and preparation. They have two sons in their 20s, too. 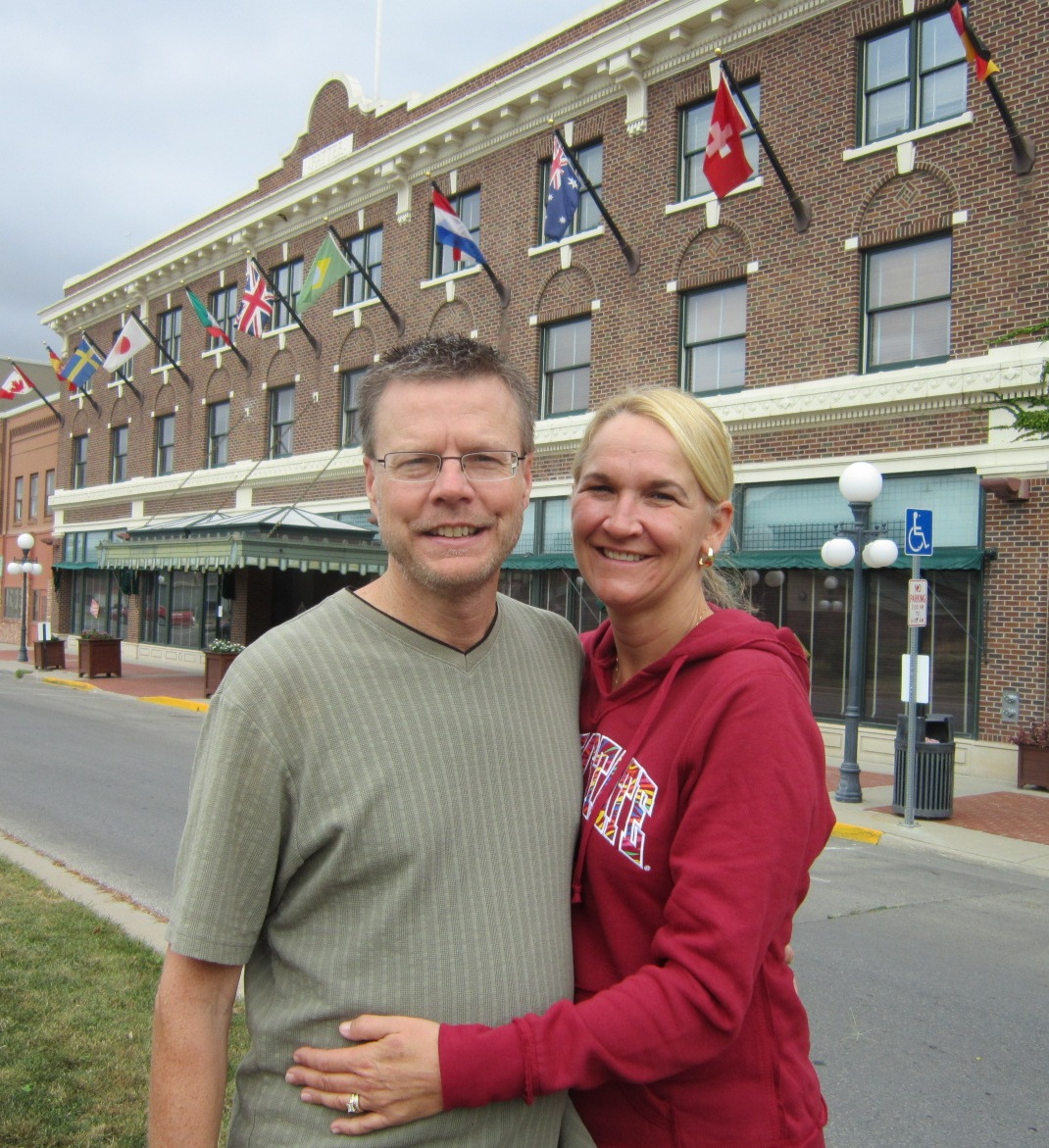 Jay and Denise Hartz outside the Hotel Pattee in Perry on the first weekend after they purchased it.

I’ve known the Hotel Pattee for decades.  Before Roberta and her husband Howard Ahmanson, who are extremely wealthy philanthropists based in southern California, restored the hotel in the mid 1990s, I don’t think I ever stayed overnight there.  However, I made too many stops in the “Club Escadrille” the hotel once housed.  The old Escadrille may have had some fine moments in the 1970s, but by the later 1980s when I was there, it had become a terrible dive, and the hotel was a sad flophouse, barely operating.

That’s why nearly everybody was shocked in about 1993, when word got out that these Ahmansons had bought the old hotel, the deserted former Carnegie Library across the street, the big former mansion of the Pattee family, and maybe another property or two in Perry.  I’m going from memory here, but was the total purchase price something like $100,000? I do recall that Roberta Ahmanson phoned an old friend, Bill Clark, an insurance and real estate agent in Perry and asked him to look into the possibilities of buying and restoring the properties.  Clark did that, called her back and said to her, “Roberta, I cannot advise you to do this.”  She did it anyway.

The Ahmansons put together a terrific staff to do research and plan the hotel restoration, which was actually a total rebuilding of everything but the building’s brick shell.  At first, nobody on the outside really understood how fabulous the overhaul was going to be.  Then word started leaking that it was going to be $10 million on the hotel alone. Right then, the dad of one of my son’s high school buddies, a man whom I knew to be one of the top carpenters in the Des Moines area, told me that “you need to look into this hotel that we’re working on in Perry.  I’ve been a builder a long time, and I’ve never been on a project quite like this one.  The owner has ordered us to use only the best grades of lumber and supplies.  Everything is first class.”

In early 1997,  I drove to Perry, walked into the hotel unannounced and peeked around.  Then I chased down the Ahmansons’ friend Clark and pestered him until he gave me a walk-through and gave me more details, which I shared with readers of the Des Moines Register.  As the hotel was finally getting ready to open in May, 1997, I finally got a face-to-face interview with Roberta Ahmanson who, to my surprise, was the farthest thing from being stuffy.

Before she met Howard Ahmanson, whose family originated in Omaha but made the first part of its fortune in southern California real estate investment post-World War II, Roberta Green was a journalist.  She had became a religion writer for the Orange County Register, based just outside Los Angeles, and she got an interview with Howard to talk to him about some of the philanthropic work he was doing with various religious and art groups.  They fell in love and eventually married.

The match had to have surprised many of their friends, because in so many ways they were really different.  Howard was the very shy, almost-introverted, soft-spoken southern Californian, heir to the Ahmanson financial empire.  Roberta was this often loud, animated and very outgoing young woman who came from very common stock in Perry — her father was a railroad engineer and her mother was a homemaker.

Nevertheless, they found each other and have done a whole lot of fantastic things in their married years, including funding excellent lectures, arts programs, journalism seminars and much, much more.  And when they’ve gotten involved in building projects, it’s always been, as the carpenter told me, “first class.”

But the story I really want to share here is my favorite about Roberta Ahmanson.  During our first in-person interview, I kept pushing her about what she had been like in the 1960s as a high school student in Perry, before she’d gone off to a church college in Michigan, taught school briefly and then went into her first-love journalism.  Finally, she told me how in her Perry High School years, she’d been very active in church but also much involved with the student newspaper, the wonderfully-named “Perry High Telital.”  In fact, she was editor of it in her senior year.

Uh, I said, did you ever have a boyfriend, or go out on dates?

“Never had a date, not even one,” she said without flinching.  “I was a Bible-toting journalism nerd, and it was a deadly combination.”

I liked her immediately, of course!

WHEN THE AHMANSONS OPENED THE HOTEL in the spring of 1997, they did so with special events that went on for several days.  There were lectures, performances, seminars and movies at the theater down the street all examining the stories of the Midwest, Iowa and Perry itself.  There were fancy banquets.  On the night of the grand opening, there was a Who’s Who of Iowa attending a black-tie gala, presided over by Governor Terry Branstad.

Carla Offenburger and I talked our way into staying in one of the rooms for two or three nights, so I could do columns from the scene.  We liked it so much that we came back many times later with college classes, a bus tour group and a bike tour group to stay overnight and experience the Pattee.

From the beginning, people were amazed when they finally got to see the hotel’s quality in construction, service, food, furnishings and exceptional collection of regional art.  I’ll never forget what Bill Knapp, the veteran real estate developer from Des Moines said after seeing it during the grand opening: “That’s the finest restoration I’ve ever seen on a building.”  And Knapp has seen a lot of those.

FOR ALMOST 10 YEARS, Perry was the envy of communities across the Midwest and beyond.  Honestly, the town had the finest small hotel between Chicago and Denver.  The Ahmansons never had in mind that they were going to recover their investment in the Hotel Pattee.  When they opened it in ’97, Howard Ahmanson reportedly drew a line and said from that point forward, he only expected the hotel to break even.

It seemed to do O.K. for a long time — and it sure was fun to stay and eat there — but eventually the newness started to wear off, the demand for reservations and banquets softened, and the bottom line slipped.  In 2006, the Ahmansons shocked everybody again, this time when they closed the hotel.

Two years later, the City of Perry took over the property, leased the operation to one management company and then another.  Service and food quality began to wobble occasionally.  And in late July, the firm running it closed the doors and pulled out.

Interestingly, Jay Hartz had become aware of the Hotel Pattee nearly a year ago, and inquired about the possibility of buying it.  The price then was too high.  But after the closure, the City of Perry officials and other community leaders began recruiting a new buyer, with what presumably was a more attractive purchase price and terms, and it all came together for the Hartzes.  Having ownership headed by one family that is living in the community and working every day at the hotel, seems like a great way to go.

Imagine that — the Hotel Pattee has become a “Mom & Pop operation,” albeit kind of a high-level one.

THE “ART ON THE PRAIRIE” festival this coming weekend will use the hotel, the restored Carnegie Library, the current Public Library, the Town/Craft headquarters, the former Security Bank Building that is now Perry City Hall, and a couple of other historic buildings downtown as the display areas.

There will be exhibitions by many of Iowa’s top visual artists, musical performers and poets.  My former Des Moines Register colleague Brian Duffy, the cartoonist and painter and avid bicycle rider, will be showing and talking about his work.  Duffy has had a collection of his favorite RAGBRAI cartoons on display in Perry since last summer, and they remain.  But he tells me he also plans “to show a collection of watercolors that I have painted from images I’d seen on bike rides along gravel roads.”

Another of my faves, actor Tom Milligan, will be doing a portrayal of Iowa’s best-known artist Grant Wood.  Coon Rapids guitarist and singer Chad Elliott will share his talents that include painting and ceramics.

You can get all the details on the festival by clicking here.