So I’m driving down Iowa Highway 141 on my way to Des Moines, listening to KDLS 1310 AM.  Right then, they played “Devil with a Blue Dress,” which became a hit in 1966 when Mitch Ryder & the Detroit Wheels performed it.  I found myself singing along and reminiscing.

The last time I heard a portion of this song had been during my husband Chuck’s first week-long stay for chemotherapy at Mary Greeley Medical Center in Ames during his cancer treatments.  It was October 2010 and he had three separate stays at Mary Greeley so he could receive “big guns chemo” in preparation for a stems cell transplant that occurred in November.  We were, quite honestly, scared out of our minds.  And we could hear the nurses in the hallway confirming drugs and dosage.

Well, the rest is history.

I smiled when I heard the song on KDLS, and immediately called Chuck back at the farmhouse and told him I’m glad he is alive.  That devil-with-a-blue-dress nurse at Mary Greeley made us relax during a very stressful time and we are forever grateful.  We’ll never forget the scene, nor the song.

We’re both doing fine, and thanks for wondering.

A BONUS ROOM, GRAVEL DRIVES AND OTHER EXCITING HOME IMPROVEMENT EXPENSES.  Okay, I’m not going to try and say that all of this came as a surprise.  But, wow, what a summer we’ve had at Simple Serenity Farm.  In late spring – when rain showers were happening nonstop – Towers Construction of Jefferson started our one-room addition.  We are calling it our “bonus room” for now.  It is located just west of our living room with French doors leading to a spacious room that eventually will become our first floor bedroom.  But until that time arrives, hopefully some years from now, we have a bonus room for when our grandkids come to visit (and their parents, too, of course).  Or for the times we want to extend our living room area for a party with friends and family.  And how convenient that it will be able to serve as a place I can have my sewing machine sitting out, so I can work on my new quilting hobby in between those bigger events.

But the bonus room project has taken all summer and now into fall.  It’s no one’s fault, really.  There have not been any significant delays in any one part of the project.  It’s just been a long project.  I blame myself for some of that because I told Justin Towers before he ever started that there was “no hurry.”  Seriously, I said that to a builder!  What was I thinking?  My advice to those considering an addition is not to tell the builder there is no hurry.  Now I have to console myself with the reality that our enjoyment of the new room will far outlast how long it is taking to get it done.  And I’m not unhappy with any of the work. 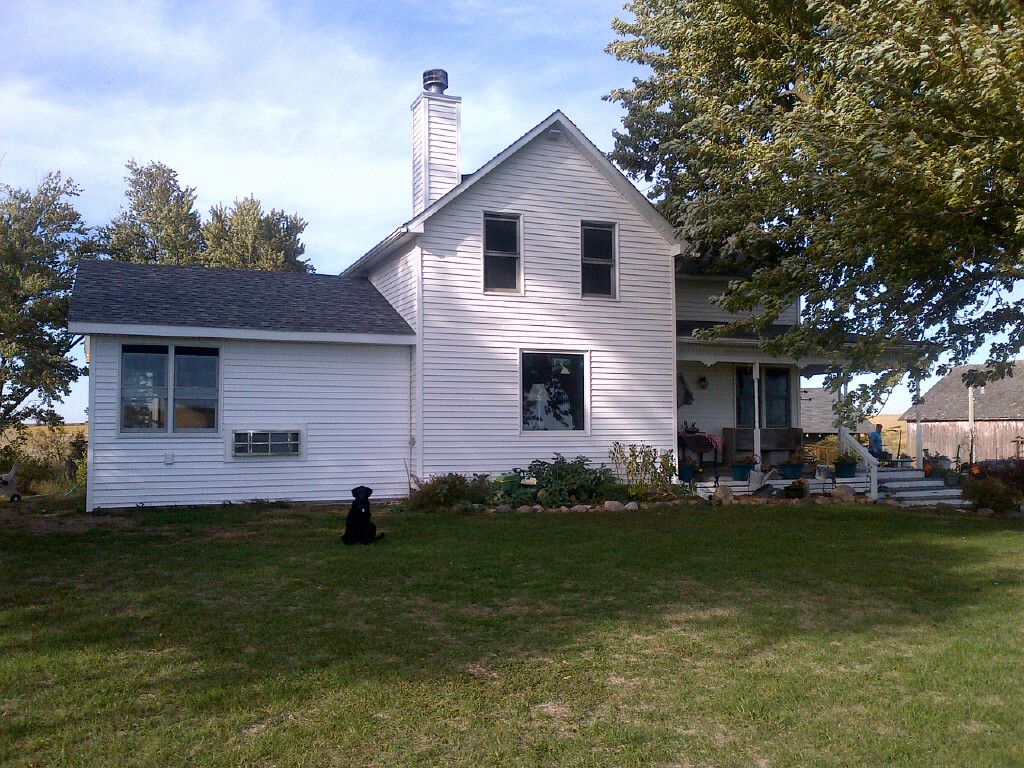 The front view of the farmhouse, with the new “bonus room” on the left, being built by Towers Construction of Jefferson.

Justin has done a fabulous job of nearly completing the new room within the estimate he gave us.  But now I’ve wiped out the surplus, and then some, with other expenditures that I decided needed to be made now.

First, I felt it was time to re-gravel the driveway.  That nice white rock isn’t cheap and you can bet when snow removal comes along this winter, I’ll be extra picky about how much gets shoved off with the snow!  Then there are all these little farm yard projects that I’ve asked Chad Black of “Fix-A-Lot Handyman Service” in Jefferson to take care of for me.  A few bush removals here and there; a new clothesline to replace the one that had to come down for the new room; installation of the new gutter pieces; a trellis for the trumpet vine that got dislocated when a dead tree fell down; and the list goes on and on.  We still have to furnish the new room.  And so it goes.

NEW SOFA BED.  Nothing is cheap about buying new furniture.  We are getting ready to say goodbye to our 20-year-old sturdy, well-worn but still very usable, sofa bed.  When we bought it, I’m sure it was expensive.  It certainly has proven to be worth every penny we paid for it.  And, we still like it.  But after so many years, I think it’s time to get something new.  Especially with the new bonus room nearing completion – so I traveled down to Homemakers in Des Moines, and found a lazy-boy sofa I liked.  I ordered custom fabric, paid for the “special treatment” stain guard, and paid extra for the latest sofa bed mattress – and AirMate.  Wow!  Hope it lasts another 20-plus years!  For $1,700, I’m still suffering from sticker shock and a little buyer’s remorse.  And I probably will be until it is delivered, along with the corner desk I bought.  Delivery date for my custom order?  Late November!  No kidding.  Until then, the room will be pretty empty, except for the storage closet built into the corner of the room.  I’ve got plenty of stuff to “store” so I’m ready to fill that closet as soon as it is completed.

CHEAP TRIP TO PARIS.  All these recent expenses makes me extra thankful that I was able to take a really cheap trip to Paris late this summer.  Oh, it was fun for a few nights in August, to holler out to Chuck from the living room, “I’m going back to Paris!”  And then I’d get lost in Harriet Welty Rochefort’s new book “Joie de Vivre” (French for “Joy of Living”).  I’m not kidding, it was as if I were there – tasting the food, hearing the French accents, people-watching at a sidewalk cafe and learning so much about the life of the French.  I loved it.  You will, too.

It’s not the type of book I would have picked up on my own, but Harriet, like Chuck, is a native of Shenandoah and Chuck ordered her book in preparation for a writers panel discussion he was leading during “Shenfest” this past weekend.  As is often the case at our house, I got around to reading the book before he did.

It’s true books can take you to places you may never go otherwise (although I have been to Paris – years ago).  Spending a week in Paris was just what I needed this past August.

A “MYSTERY QUILT RETREAT.”  I spent Friday, Saturday and Sunday, September 27-29, at a “Mystery Quilt Retreat” hosted by Suzanne Sievers (owner of the Stitch quilt shop in Jefferson).  What fun!  The biggest mystery to me is that I really enjoy quilting.  I also enjoy these retreats where, if I were really good at this, I could finish the piecing of a quilt during the retreat (like many of the more experienced quilters can do).  I, on the other hand, am going to have to spend more time on several steps before my mystery quilt is “revealed.”  I sure did like all the ones I saw that were farther along than mine.

Most of my friends find it surprising that I’m enjoying this new hobby so much.  But here’s how I figure it – I just do what I’m told!

I have to follow directions and not question anything because I’m so unsure of myself.  I do whatever Suzanne Sievers and more experienced quilters tell me to do – because I don’t know any better.  This is quite a deviation from the rest of my life, when I’m usually in charge, telling others what to do (it’s true).  Being able to take charge and get things done enthusiastically and efficiently is a skill I’ve had most of my adult life.  It seems to come naturally to me.

Quilting is a hobby in which I’m not in charge.  And I don’t want to be.  I like just sitting at the sewing machine and doing whatever comes next.  The mystery quilt I started this weekend will be my third quilt since I took my first class in the fall of 2012.  This is my most intense one, too – since it has “points” and “stars” and “small pieced blocks.”  Oh my.

The cool thing about the retreat experience for a beginner like me is I learn so much from others.  I can now do the “frog stitch” really well (that’s “rip it, rip it, rip it” – out and start again).  I can cut out a “nub” to make sure my star has a point, and I can “chain” pieces together so as not to interrupt my sewing rhythm for every little piece (and, it seemed to me, save some thread, too).  I also know what a “scant 1/4-inch seam” is.  Go figure.

And I just have to mention what else goes on during a quilt retreat.  You eat.  A lot.  Everyone brings a snack or two that are set out and available from arrival to departure.  Suzanne does a terrific job of cooking up meals for the entire weekend, too.  On Friday night, we had homemade lasagna, homemade bread and salad.  Saturday for lunch, it was minestrone soup and sandwiches.  And then Sunday morning, it was fresh pecan rolls and a fruit cup.  What’s not to like about all that?

I already signed up for next year.  My goal is to have the two quilts I have pieced and also my “mystery” quilt completed by next year’s retreat.  From what I’m learning about quilters, that might be a bigger task than I imagine.

WHO CAN DENY IT?  Chuck wrote me an email at work recently that indicated he had agreed to take home an outhouse that was used as a promotional prop for a recent Greene County Historical Society program in Jefferson.  The program, by the way, was a hit with more than 130 folks coming from near and far to hear Teresa Minard, of Clarinda, talk about the history and continuing public fascination with outhouses.  I’m not making this up!  But, back to Chuck and his agreeing to take the outhouse.  I admit that he asked if I was interested in it first.  “Of course,” I said.  “It will make for some great yard art near the garden.”  His email announcing that a 200-plus pound, very authentic looking outhouse would indeed be a new fixture in our yard ended with the line, “Can’t say that I don’t come up with some mighty fine gifts for you, Carla.”  Who can deny it? 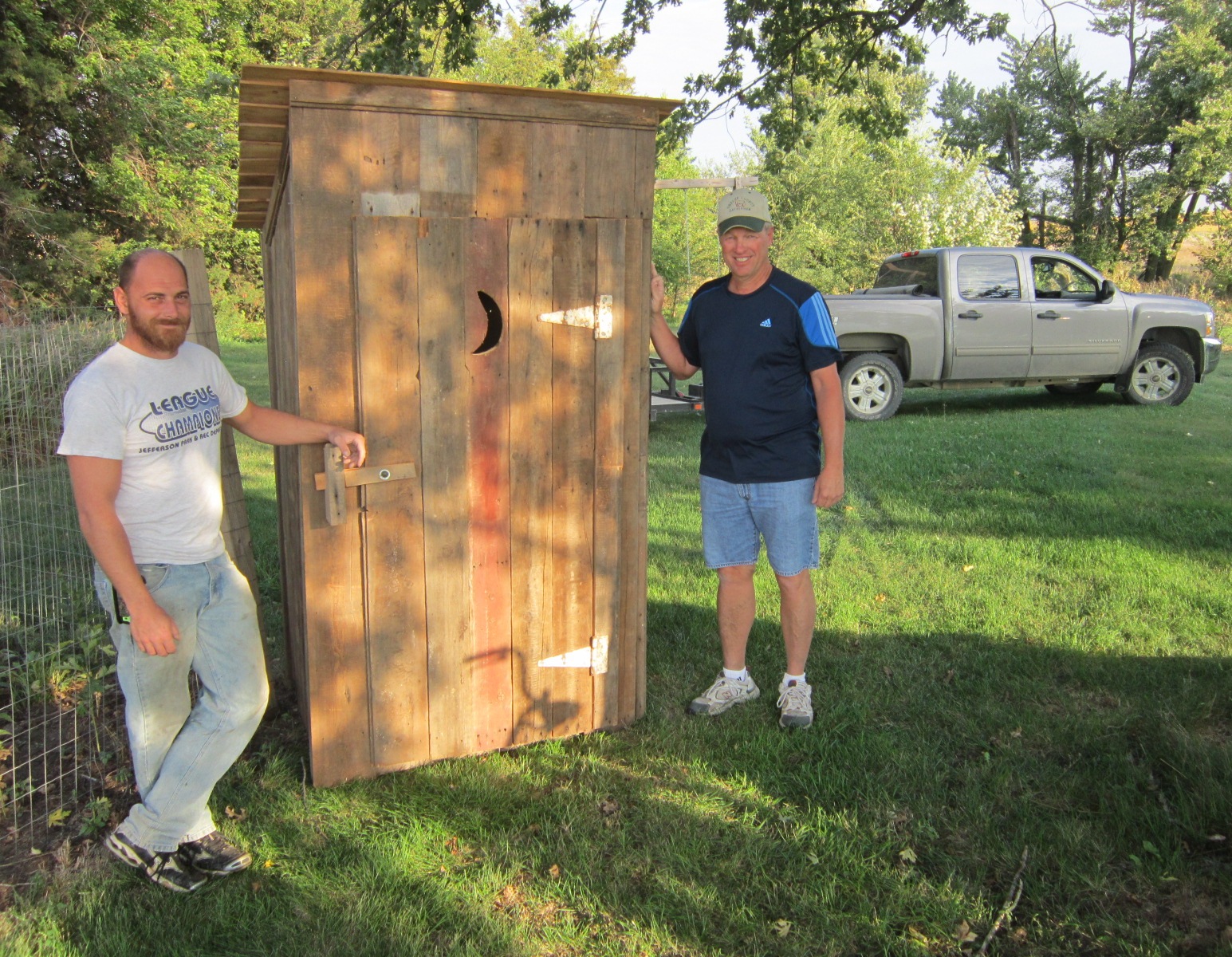 The outhouse, after its delivery to the garden corner by our neighbors Randy Kienast (left) and Doug Lawton.  The biffy was built by Roger Aegerter, executive director of the Greene County Historical Society, and used as a “visual aid” for a program on outhouses at the Historical Museum in Jefferson.

I’LL TRY TO KEEP UP!  And so, life at Simple Serenity Farm continues to take interesting twists and turns – too fast for me most of the time.  Stay tuned for what happens next, and who knows when.  I’ll try to be a bit more consistent in my reports – even when life is anything by consistent around here!