COOPER, Iowa, April 9, 2016 – What happened to about 150 of us Monday night at the new Wild Rose Casino & Resort in our county seat town of Jefferson was so different, so fun and so inspiring, I felt like our imaginations might just explode our heads.

Grow Greene County Gaming Corporation, the non-profit organization that owns the gaming license for the casino, was making its first annual charitable donations from the Wild Rose profits. 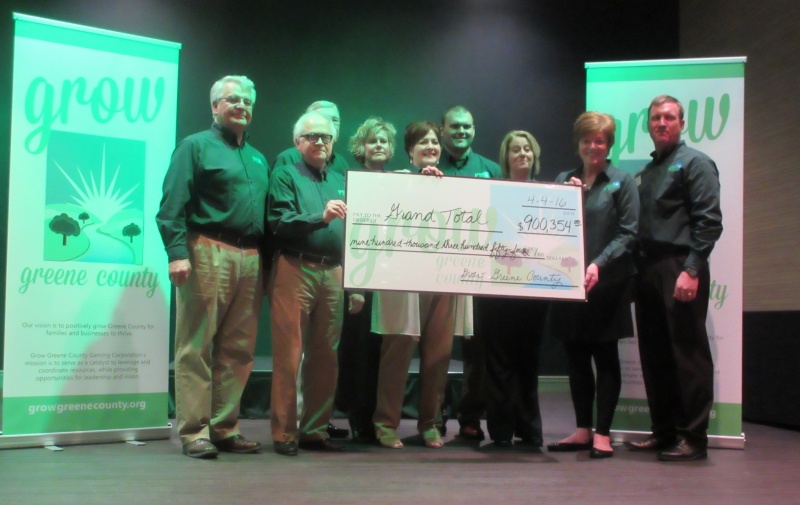 Even more thrilling is the fact that these first grants were based on only six months of operation of the casino, from last July until the end of the calendar year. It is entirely likely that in future years, when the grants are made from the casino profits, Grow Greene County will be distributing double the amount we saw Monday night.

That is what was making imaginations run wild around the tables in Wild Rose’s “Greene Room” conference center and banquet hall.

Think just how transforming this is going to be in Greene County, a rural county with fewer than 10,000 people.

Norm Fandel, president of Grow Greene County, said it best: “Now we can achieve goals we’ve dreamed about for decades. This is going to let us dig down, think bigger, think harder – how can we be more creative in our thinking?”

I happened to be sitting at a table that included my Cooper-area neighbors Tom and Sue Wind and Linda Hedges. (They were attending to represent the Greene County Community Foundation, which picked up a check for $125,000, which the foundation will eventually give away in grants of up to $35,000 apiece for public projects. Meanwhile, Grow Greene County will fund the county foundations, economic development, towns, schools and grants of more than $35,000 for public projects.)

Here’s the full crowd of representatives of various non-profit organizations, local governments and school districts that received grants in the first round of distribution of gaming profits from Wild Rose Casino & Resort in Jefferson.

Sue Wind leaned over to me and said quietly, “Hey, how come Cooper doesn’t get a check?”

I explained that Cooper, pop. 30 (on some days), is an unincorporated community so we’re not an official city like the others.

“Well, maybe it’s time for us to incorporate!” she said.

I told her that 11 years ago, when I first moved to the area and was starting to get involved, I wondered about that myself. So I went to the late Gerald Lawton, the sage & spirit of Cooper, and asked about it.

“Gerald,” I said, “Cooper is not incorporated as a city, right? We don’t have a mayor and city council and all that, right?”

I paused to see if he would elaborate. When he was saying nothing more about it, I said, “Uh, let me ask – should we be incorporated?”

He glared at me with his response: “Hell, no!”

Sometimes I don’t have enough sense to stop, you may have noticed. So after another pause, I said to him, “So, tell me, why not?”

Lawton may have even grabbed me by the shoulder to make his point stronger, as he said, “Listen, when you’re not incorporated, you can get away with a helluva lot more!”

I guess I’d add to the above that in little Cooper, we’ve always thought plenty big. So we’d probably just get in trouble if we had real money and could think even bigger.

We’ll just make it our job now to keep challenging everybody else in the county to think bigger. 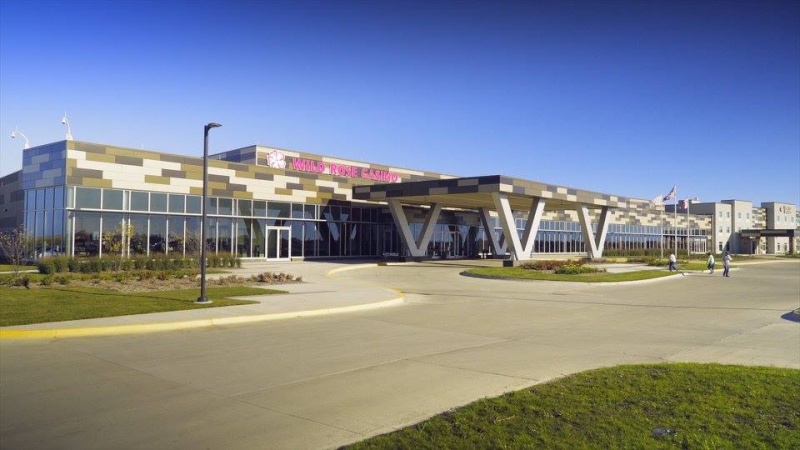 Below here is a round-up of other fun from Monday evening, when there was such good feeling during cocktails, excellent hors d’oeuvres and then the announcement of the grants:

–Fandel, the Grow Greene County president, noted that there was “100 percent attendance” by representatives of all the groups and entities that received grants. Then he added, “But as someone else said, ‘Well, when you’ve got free food and money, who wouldn’t show up?’ ”

–Tom Timmons, president and chief operating officer of Wild Rose Entertainment, spoke briefly to start the evening. Fandel introduced him as “a person who has changed the ways of Greene County.” And indeed Timmons has done that, as he has directed the development and operations of the three Wild Rose casinos owned by partners Gary Kirke and Dr. Mike Richards, of West Des Moines. Timmons, who has worked in the Iowa gaming industry since it started decades ago, recalled that at the time Greene County had just decided to launch a campaign for a new casino, Cedar Rapids was doing so, too. “We came up for a meeting that was actually in Kim Rueter’s garage,” Timmons said, referring to the Grand Junction farm manager who first had the idea here for a casino. “When we left that meeting, I told Rick Gilson, who is our internal auditor, ‘You know what, I have this crazy feeling that this casino in Greene County is going to ‘go,’ and Cedar Rapids isn’t.’ ” And that is what has happened.  But Timmons said he wasn’t so sure it was going to happen on June 12, 2014, when the five members of the Iowa Racing and Gaming Commission, meeting in Burlington, were casting their votes on the Greene County proposal. The first commissioner to vote was a “yes,” the next two were “no,” then there was another “yes.”  Then commission chairperson Jeff Lamberti spoke several tense minutes before casting his tie-breaking “yes” vote. Timmons told the crowd Monday, “That was the longest 20 minutes of my life!” He said he is “proud to be a part of this” in Greene County, and although he has worked at and on several casinos in his long career, “in my heart this will always be No. 1.”

–The board of directors of Greene County Gaming Corporation should collectively be named the county’s citizens of the year, you know? Along with President Fandel, they are Vice-President Craig Marquardt, Secretary Peg Raney, Treasurer Bob Allen, Kate Neese, Brenda Muir, Rick Morain, Lori Mannel and legal counsel Michael Mumma. They’ve not only devoted dozens of hours to administering the grants program, they also were heavily involved in the campaign to get the casino approved for Greene County.

–When you put the Grow Greene County board together with the officers and board of the Greene County Community Foundation, which has been operating for a decade, you can figure that at least 20 of our leading citizens in the county are devoting an amazing amount of their volunteer time to something that did not happen nearly as much in past years – they are giving away money to good groups with good projects. 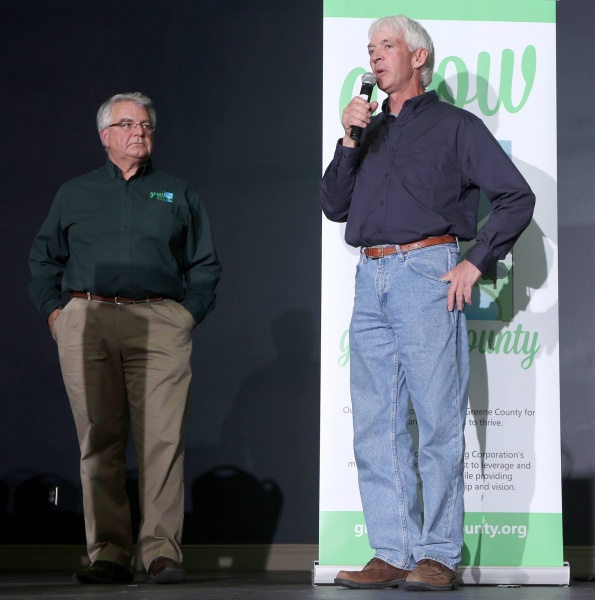 Dan Towers, of the Greene County Conservation Board, thanked the crowd for the big donation to be used for paving gravel road crossings on the Raccoon River Valley Trail.  At the left is Norm Fandel, president of the board of Grow Greene County Gaming Corporation. (Photo by Jeff Storjohann, Carroll Daily Times Herald/Jefferson Herald)

–Grow Greene County’s decision to award $124,000 to the Greene County Conservation Board for paving the Raccoon River Valley Trail’s crossings of gravel roads in the county, is a huge hit with trail users throughout central Iowa. On the RRVT’s website, we have a full story on that project, and you can read it by clicking here. When that story was promoted on the trail’s Facebook page, hundreds of readers took time to read it, comment on it and “share” the story.  By Saturday, it had reached 15,928 people. “This is like Christmas for us!” Dan Towers, the veteran conservation director and trail manager in Greene County, told the crowd Monday night.  Choking back surprise and emotion, Towers continued, “Thank you for having the trust and confidence in those of us who are improving this trail.  You’ve recognized that a big part of the decision when a family is deciding whether it wants to move into a new community is what the recreational amenities are.  We like to think the Raccoon River Valley Trail is one of the best trails anywhere.”

–Abiding by its promise made during their campaign for the casino, Grow Greene County shared the gaming profits with the community foundations in the six contiguous counties to Greene. Each of the six received $18,200 in this first round. Particularly fun was the response from Randy Kuhlman, CEO of the Webster County Foundation in Fort Dodge. “First of all, I’m very jealous of this,” Kuhlman told the crowd. “We tried to get a casino on Highway 20 in Fort Dodge, but we got turned down. Now here we have this casino on Highway 30 in Greene County, and what a wonderful facility it is! And it is so generous of you to share the proceeds.”

–So here we go, Greene County. Let’s think big, follow-through and see how much we can change and improve our communities and our county in the years ahead.