BOONE, Iowa, March 25, 2016 –“This is my Father’s world,” the grand old hymn begins. Yes, it is His world, but we get to live in it. We need to help take care of it, too. That includes helping the Y Camp near here get new wooden plaques that, line by line, display the lyrics of that hymn on tree trunks you pass while climbing a switchback staircase up a 150-foot high bluff to “Chapel Point.”

Hopefully, this sounds at least slightly familiar to you.

For 23 years now, a group of us have gathered on Wednesday of Holy Week at the Y Camp, located just northwest of Boone, owned and operated by the YMCA of Greater Des Moines. We eat lunch in the camp dining hall, and then when the weather is good, we make the climb up the bluff. At Chapel Point, like Y Campers have been doing for 97 years, we have a few minutes of reflection about life, friends, spirituality and service. If you want to read more about how our tradition started, you can do so by clicking here. 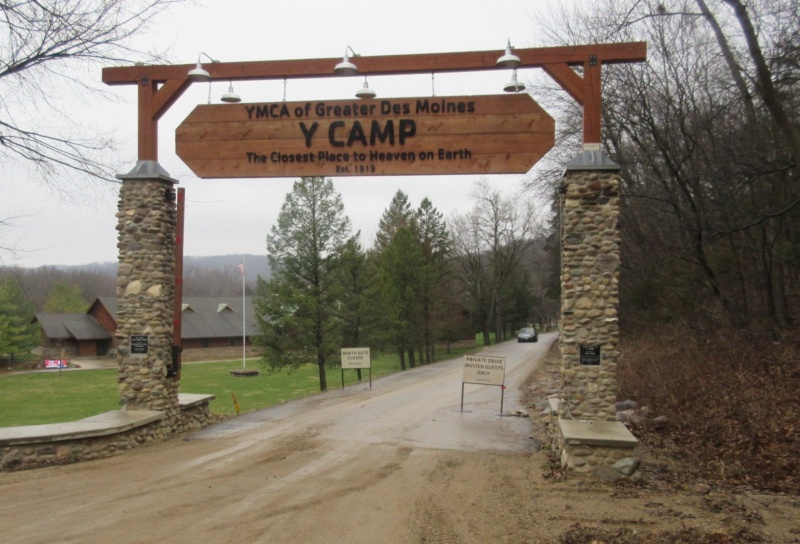 The new gateway at the entrance to the Y Camp northwest of Boone in central Iowa, with the sign sharing the traditional motto of the camp, “The Closest Place to Heaven on Earth.”

It is breathtakingly beautiful up there as you look out over the 400 acres of the camp, the Des Moines River valley and the surrounding farm fields. You readily understand why the camp’s motto is “The Closest Place to Heaven on Earth,” and you also understand why long ago they posted the words to “This Is My Father’s World” on the wood slabs on the tree trunks you pass.

When we’re all up at the top, we sing that hymn, which was written by the late 19th century Presbyterian preacher and poet, Rev. Maltbie Davenport Babcock, who ministered in Baltimore and New York City. In fact, we have named our Holy Week group the “Maltbie Babcock Society.”

In recent years, we had noticed that those wooden plaques on the trees are disappearing. They are so old that they crack, break and blow away in storms. 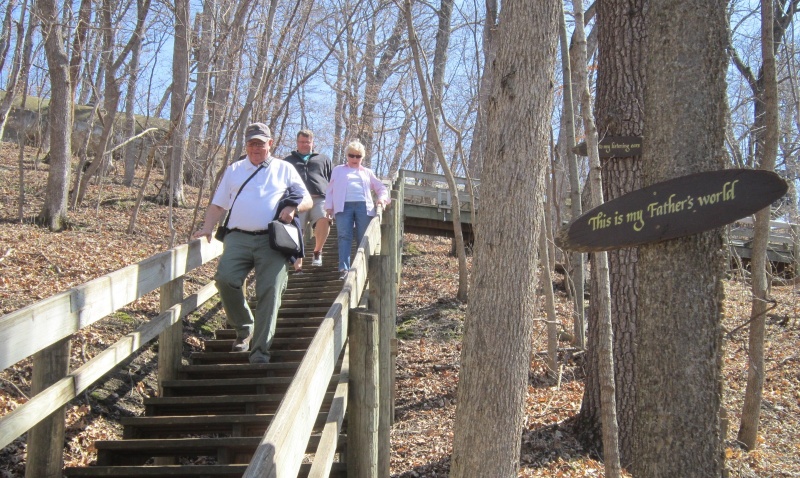 On fading old wood plaques fixed to trees along the stairway up the bluff to Chapel Point, the words to the hymn “This Is My Father’s World” are painted.  Alas, after decades there, many signs have broken and blown away.

So we asked Y Camp Director Dave Sherry to do some research on what it would cost to get a new set of nicely-done plaques. When we were there this week, Sherry reported he had checked with local craftsmen and that there will need to be 20 of the plaques, each costing about $100, to properly display the lyrics. Total cost: $2,000.

On the way up, you will read the first verse of the Babcock hymn, as quoted above.

On the way down, you will read the first verse of a poem “I Would Be True” by Rev. Howard A. Walter, a Congregational minister and poet of the early 20th century, who wound up serving as a YMCA missionary:

These musical and poetic lines are stuff that young Y Campers need to read. Older Y Camp visitors will benefit from them, too.

I told Sherry, the Y Camp boss, to order the signs and that we in the Maltbie Babcock Society will raise the money. And we now ask for your help. Here’s what you get for a donation: 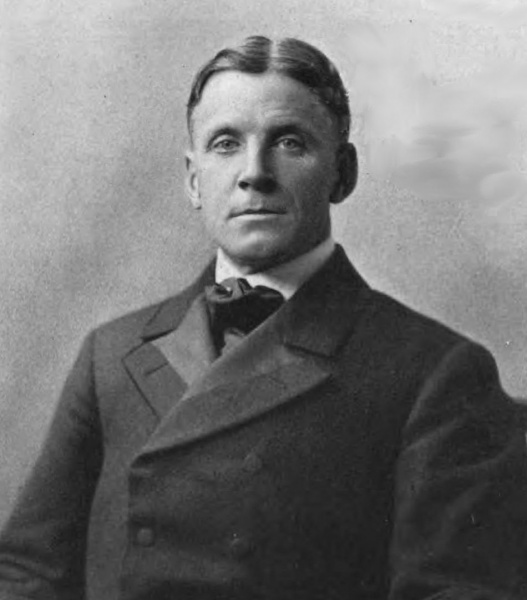 Rev. Maltbie Davenport Babcock, the Presbyerian preacher who lived from 1858 to 1901 and wrote the poem that became the words to the favorite hymn “This Is My Father’s World.”

1) Satisfaction that you have helped with a neat project.

2) Lifetime membership in the Maltbie Babcock Society, and with that, an annual invitation to join us at the Y Camp on Wednesdays of Holy Week for our fun and meaningful tradition.

3) An invitation to a picnic we will have at the Y Camp as soon as our fundraising tops $2,000. Maltbie Babcock Society members will grill meat for sandwiches, everybody can bring a potluck dish or dessert. We’ll have a few brief reflections, we’ll all sing “This Is My Father’s World,” and then we’ll lead the willing and able on a climb to Chapel Point, and we’ll have our society’s bugler Stan Moffitt play “Taps.” This will be a fun event, especially so if it’s been years since you’ve been to “The Closest Place to Heaven on Earth.”

So, notify the two couples of us who are coordinating this project:

Checks should be made to the “YMCA of Greater Des Moines,” and you can note them “Maltbie Babcock Society.” If we raise more than $2,000, the extra will go toward other Y Camp enhancements. 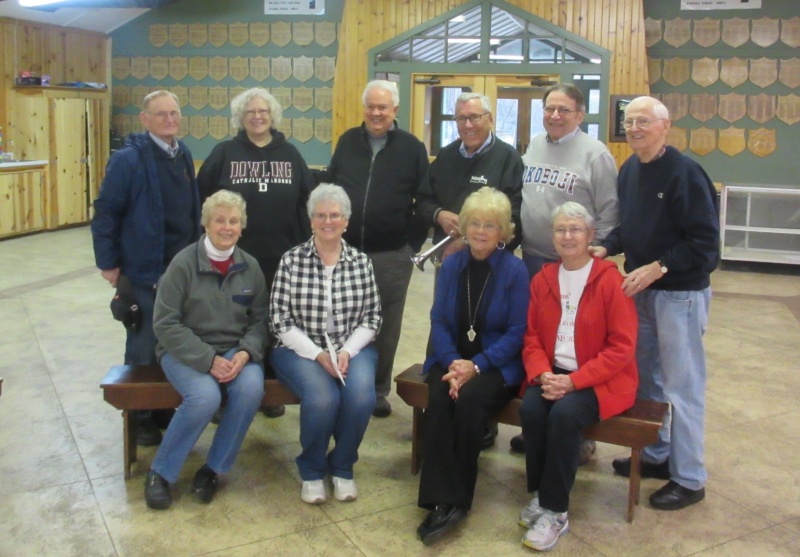 Joining in this year on the Holy Week tradition of meeting at the Y Camp in Boone, and usually climbing Chapel Point, were (left to right, front) Ellen Corwin or Urbandale, Ronna O’Brien of Ogden, Marlene Moffitt of Boone, Dodie Pugh of Johnston, (rear, left to right) Mike O’Brien of Ogden, Phyllis Fitzpatrick of Des Moines, Chuck Corwin of Urbandale, Stan Moffitt of Boone, Chuck Offenburger of Cooper, and Don Neumann of Des Moines. 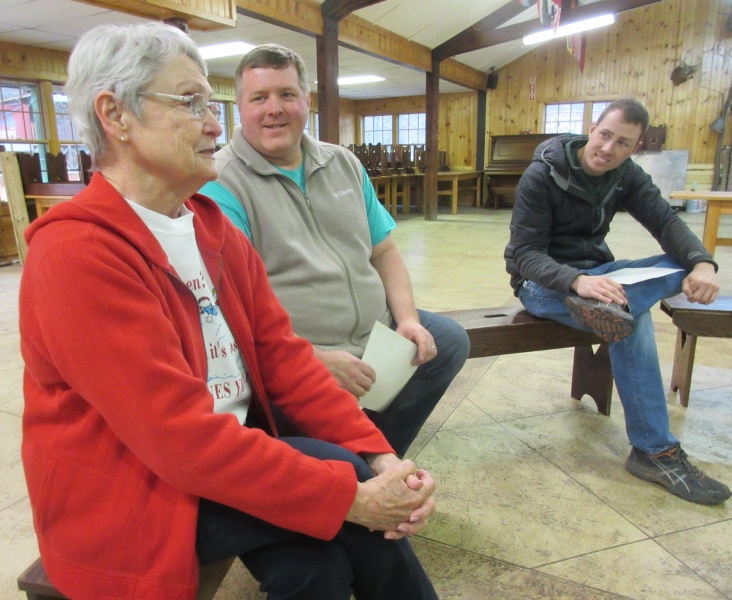 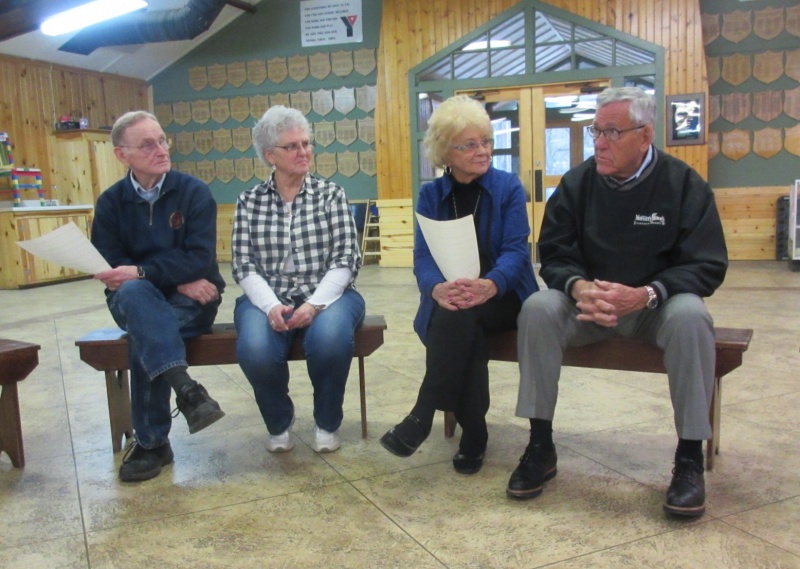 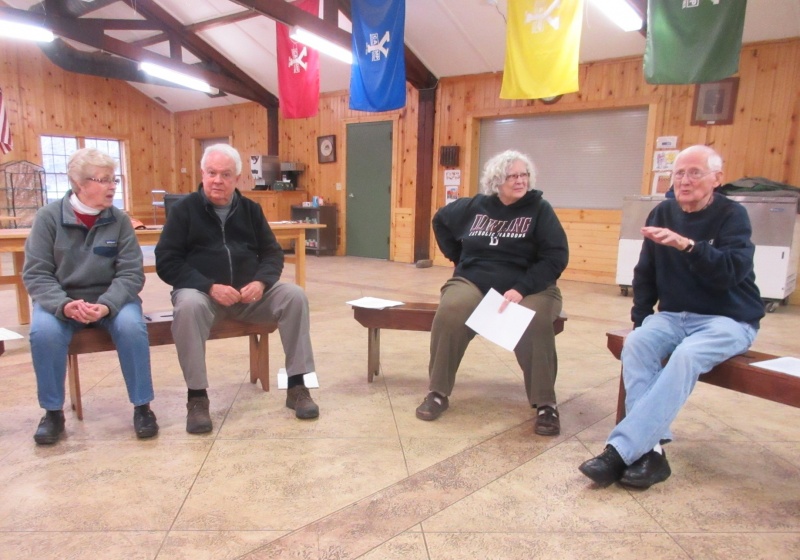 Don Neumann tells a story from his boyhood at Y Camp, with Ellen and Chuck Corwin (to the left) and Phyllis Fitzpatrick. 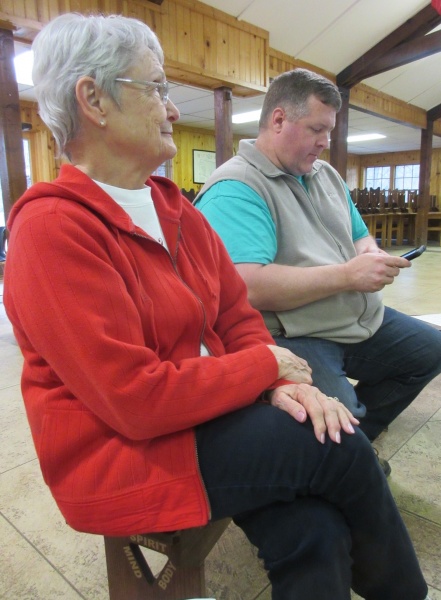 Part of our group’s tradition at the Y Camp is reading a couple of Bible passages that are meaningful to all of us, however none of us remembered to bring a Bible this year, so Y Camp director Dave Sherry used his cell phone to find one of the Bible verses and read it, and that’s Dodie Pugh on the left. 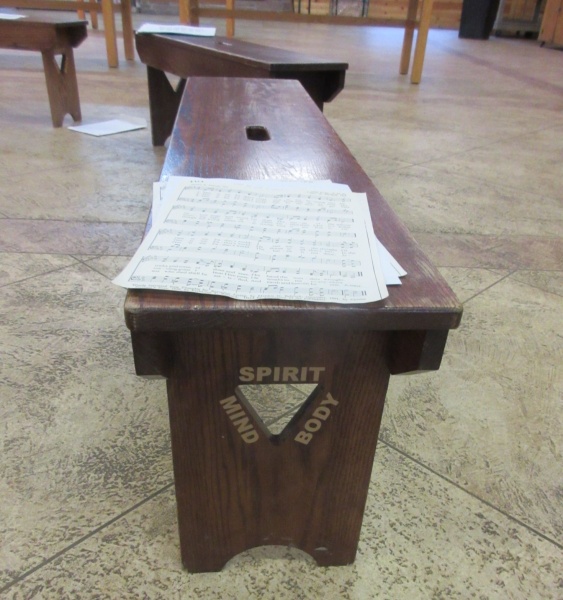 Love these benches that are used in the dining hall at the Y Camp, and this one happened to have some song sheets on it for “This Is My Father’s World.” 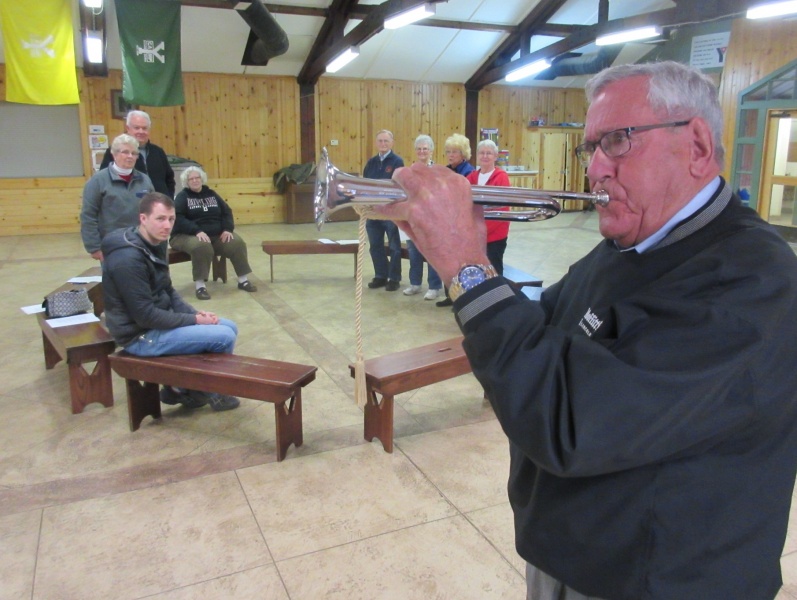 Stan Moffitt is the official bugler for the Maltbie Babcock Society, and he concludes our service every year by playing “Taps.”  Normally he is playing it from the top of Chapel Point, overlooking the Des Moines River valley, but when we gathered on Wednesday, the weather was to rough to allow the climb. 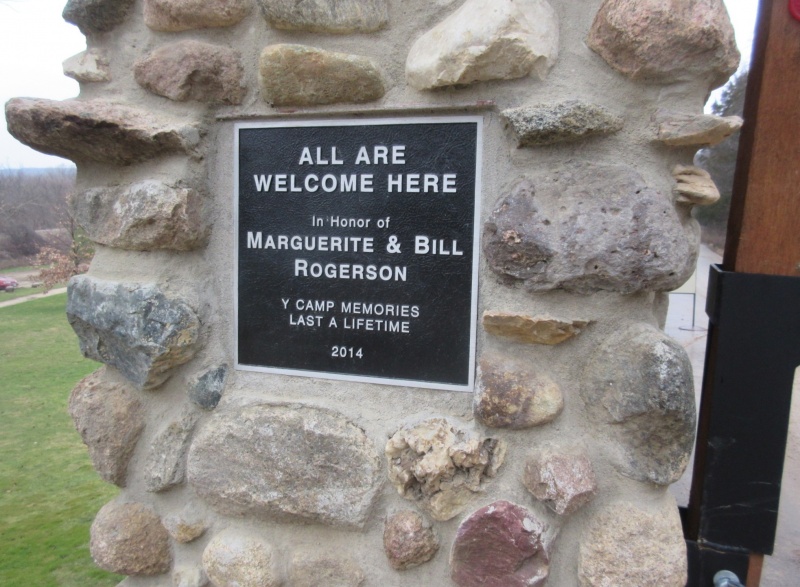 This sign on the west pillar of the new Y Camp gateway honors the support of the Rogerson family. 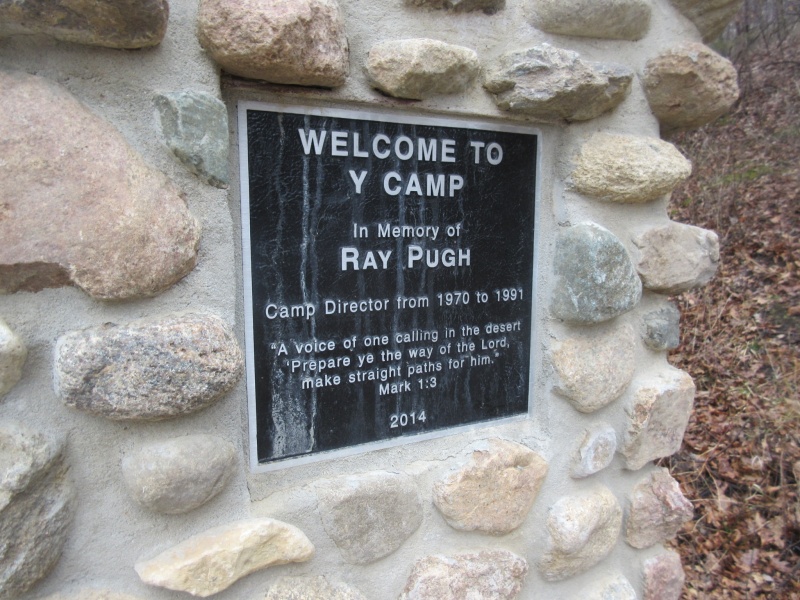 Sign on the east pillar of the new Y Camp gateway is a tribute to the camp service of the late Ray Pugh.