BOONE, Iowa, April 6, 2015 — Many of you will remember this tradition we Offenburgers have with our good friends Chuck and Ellen Corwin, of Des Moines. On the Wednesday of Holy Week each spring, we meet at the YMCA Camp northwest of here, climb its 150-foot-high Chapel Point, look out over the picturesque Des Moines River valley, and reflect on the goodness all around us.

Chuck Corwin got this started, about this time of year way back in 1994, when the luncheon discussion among a group of friends in downtown Des Moines, somehow turned to “a place where you had a real spiritual experience.”  He said immediately it was atop Chapel Point at the Y-Camp when he was a boy, back in the 1950s and was riding the train up to summer camp here.  Standing up there now, you understand why it would impact a child or an adult that way.  Look out over the 400-acre camp and its spectacular surroundings, and you immediately understand why the 96-year-old camp’s motto has long been, “Closest Place to Heaven on Earth.”

So, anyway, back in ’94, the day after Corwin told our lunch crowd about this, I was going to northwest Iowa on a story for the Des Moines Register.  On my way back, I thought of Corwin’s comment, checked the map, saw that I could easily drive to the Y-Camp, and made my first climb of Chapel Point solo.  It happened to be on Wednesday of Holy Week that year, and we’ve been coming back on the same day every year since then.

Our visit has a ritual.  We have drawn Y-Camp officials into cahoots with us on this, and that means Eric Jaeger, the Y-Camp’s food service director, fixes us a great lunch in the dining hall.  We always share any news as well as any favorite old summer camp stories, and Y-Camp Director Dave Sherry, starting his 15th year at the facility, briefs us on changes there.  Our favorite report this time was how successful the Y-Camp has been, the last few years, raising two pigs at the camp each summer.

“Since we’re a program that feeds a lot of people in a licensed and inspected kitchen, we cannot have any food that is put on the serving line being kept afterward to re-serve later,” Sherry said. “We have to throw away all leftovers, and it always bothered us that we were putting so much of it in the garbage.  We talked a lot about how we could reduce waste and avoid having to send a dumpster full of food to the landfill.  One of our family campers, the late Duane Skow, of Johnston, one day said, ‘Well, have you thought about getting a couple of pigs?’ ”

So, in recent springs, Sherry has found Y-Camp supporters who are pork producers to donate a couple of pigs for the summer.  Among the pairs have been “Pork” & “Beans,” as well as “LaVerne” & “Shirley.”  They get all the table scraps through the summer.  When the camping season ends, the staff have been arranging to pick-up left-over pizzas, donuts, cookies and other snack food from local supermarkets, and having the hogs eat that for about two weeks.  That “seems to sweeten them up a little,” Sherry said.  He said “it does bother me to watch the hogs eating leftover sausages. That just doesn’t seem right, you know?”

In the fall, the hogs — by then 340 or 350 pounds apiece — are taken to a local meat locker for slaughter.  Y-Camp staff members, who pay the processing fees, then are given the pork for their families to enjoy.

“It’s been a good program,” Sherry said. “Our Y-Camp staff are certainly not overpaid, so this is one way to give them a little extra benefit.  And those pigs save us sending another dumpster-load per month to the landfill.”

We think the 79-degree, sunny weather we enjoyed up on top of Chapel Point was the most pleasant ever.  We’ve been up there in rain, snow and miserable  conditions, too.  One year it was so nasty we had our ritual in the living room of the Sherry family home down below.

We always reflect up there about old friends who’ve passed since our last visit; about the inspiring Y-Camp and YMCA leaders of the past & present, and about our gratitude for still being alive and together in such a beautiful place.  Chuck Corwin reads what we refer to “the Bicyclists’ Verses” from Isaiah in the Bible, about “hills being lowered” and “valleys raised.”  Then we convene what we call “The Maltbie Babcock Society,” named for the 19th century pastor, author and composer who gave us the hymn “This Is My Father’s World.”  The society is made up of whoever is up on Chapel Point with us at the time.  We form a chorus and sing that great song, as we look out around the Father’s World.

Silly? Of course it is.  But something about it is profoundly moving, too.  That’s why you might want to come join us next year.  Same time, same place.  Amen. 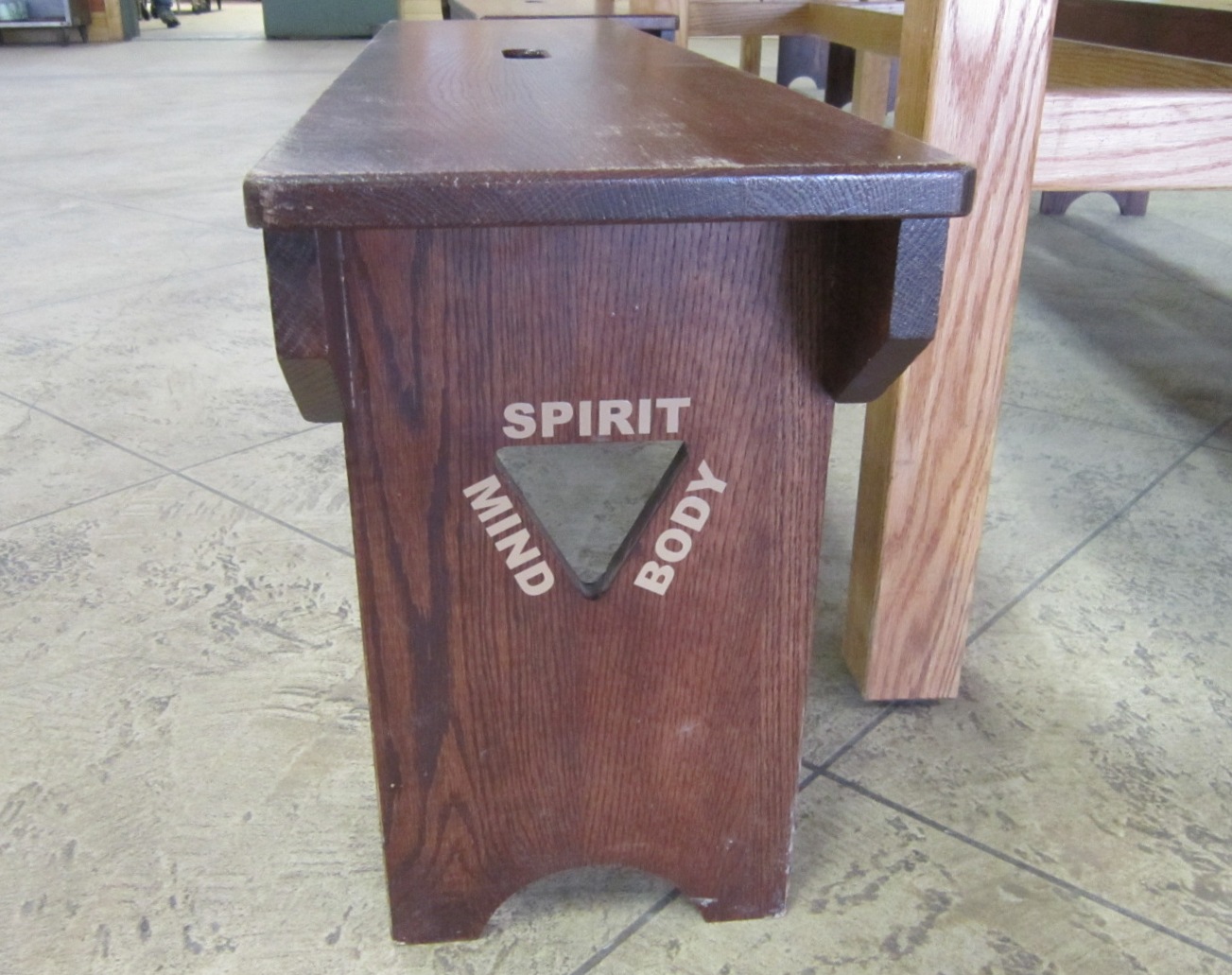 The benches in the Y-Camp’s cafeteria remind you what this place is all about — developing the mind, spirit and body. 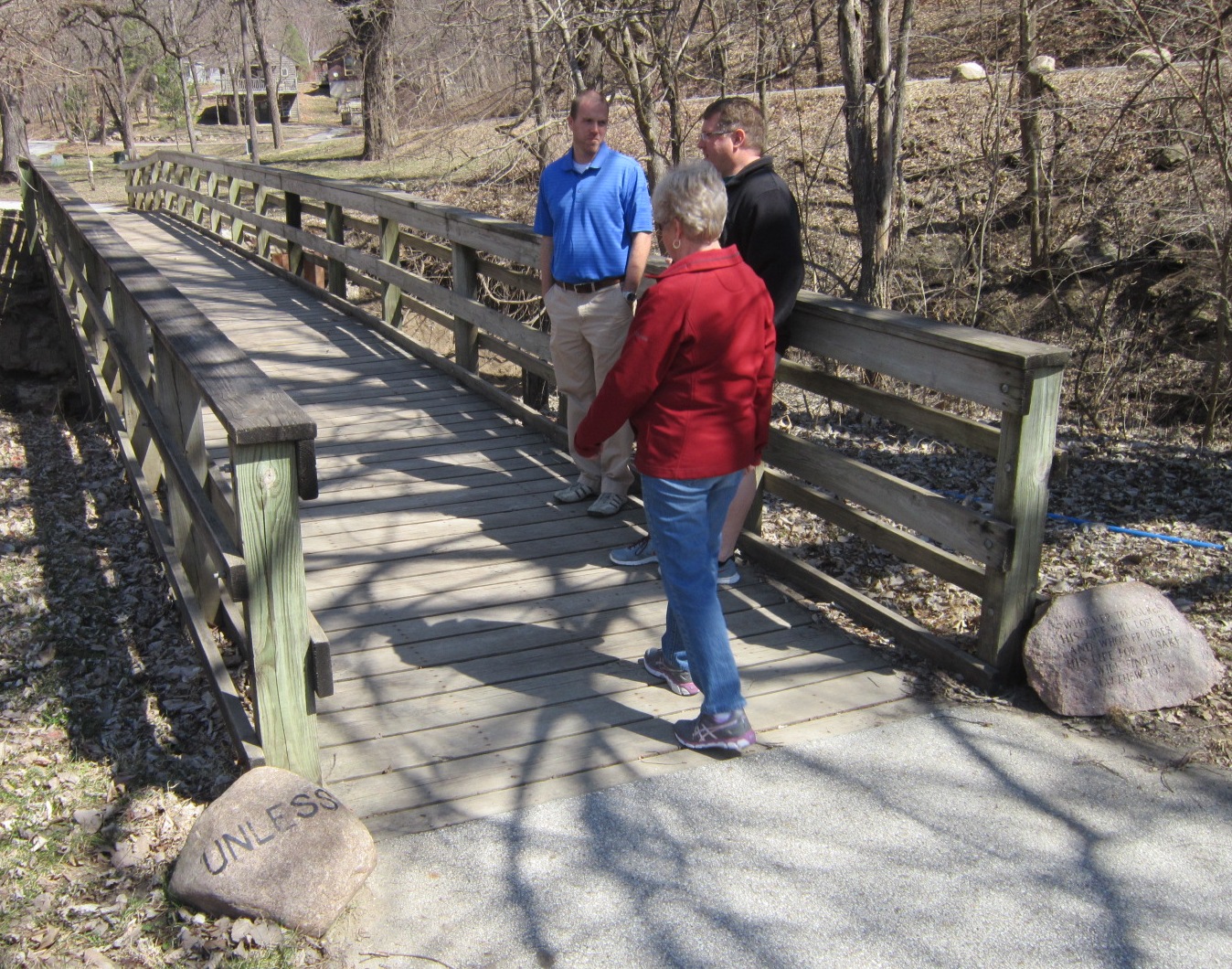 Ellen Corwin, on the walk over to begin the climb of Chapel Point, reaches a creek bridge where the “Unless” rock (at lower left) reminds everybody of the great line from Dr. Seuss’ story “The Lorax,” that says: “Unless someone like you cares a whole awful lot/ nothing is going to get better. It is not.” 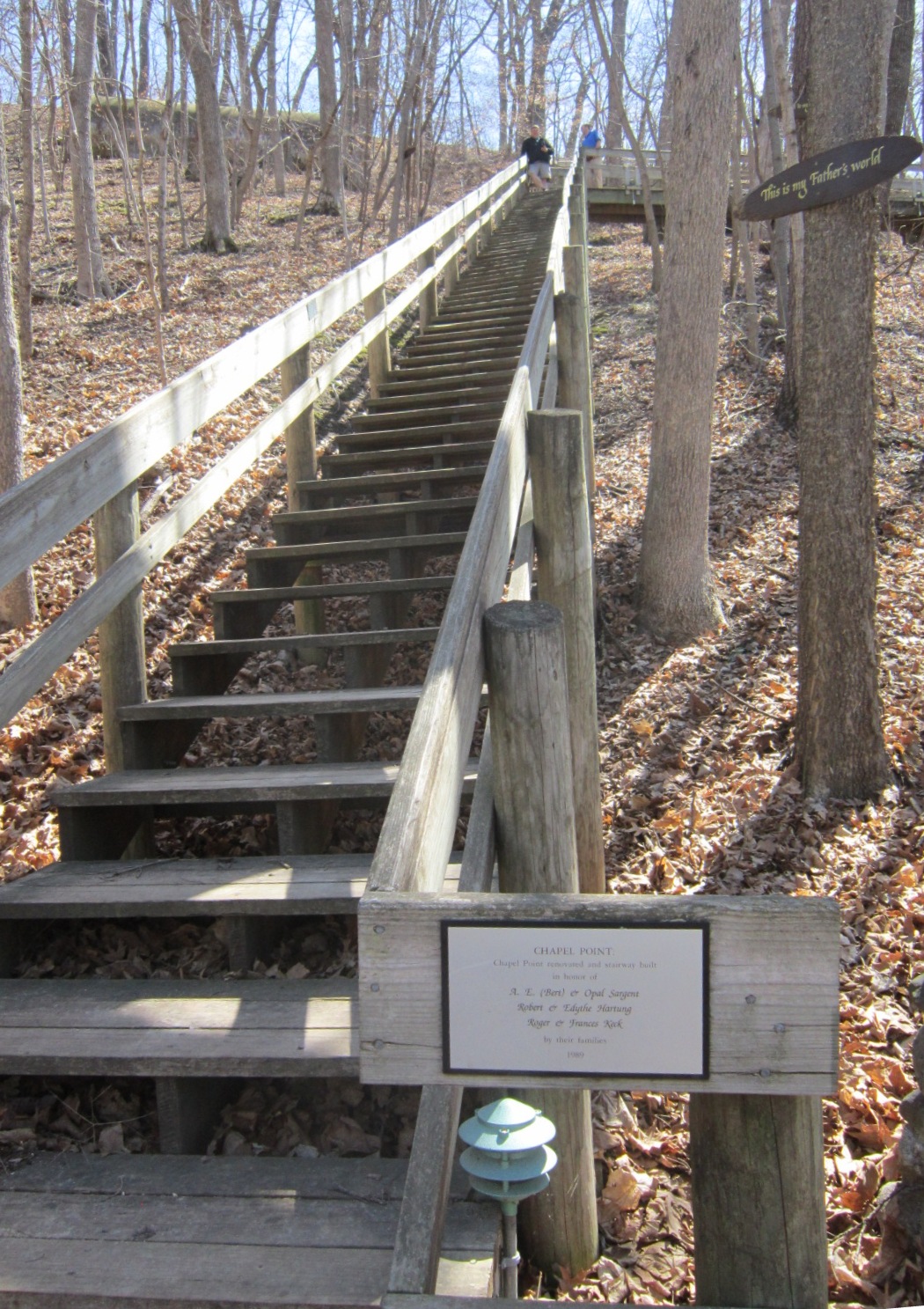 We think there are 135 steps that you climb up the bluff to Chapel Point.  Our estimate is that when you are up there, you are about 150 feet above the Des Moines River, depending on how high it is, of course.  The staircase and Chapel Point are maintained with contributions and actual labor from many Y-Camp supporters — including the Sargent, Hartung and Keck families of the Des Moines area.  Wood plaques nailed to trees alongside the staircase let climbers meditate on the words of the great old hym, “This Is My Father’s World,” which is Carla Offenburger’s favorite. 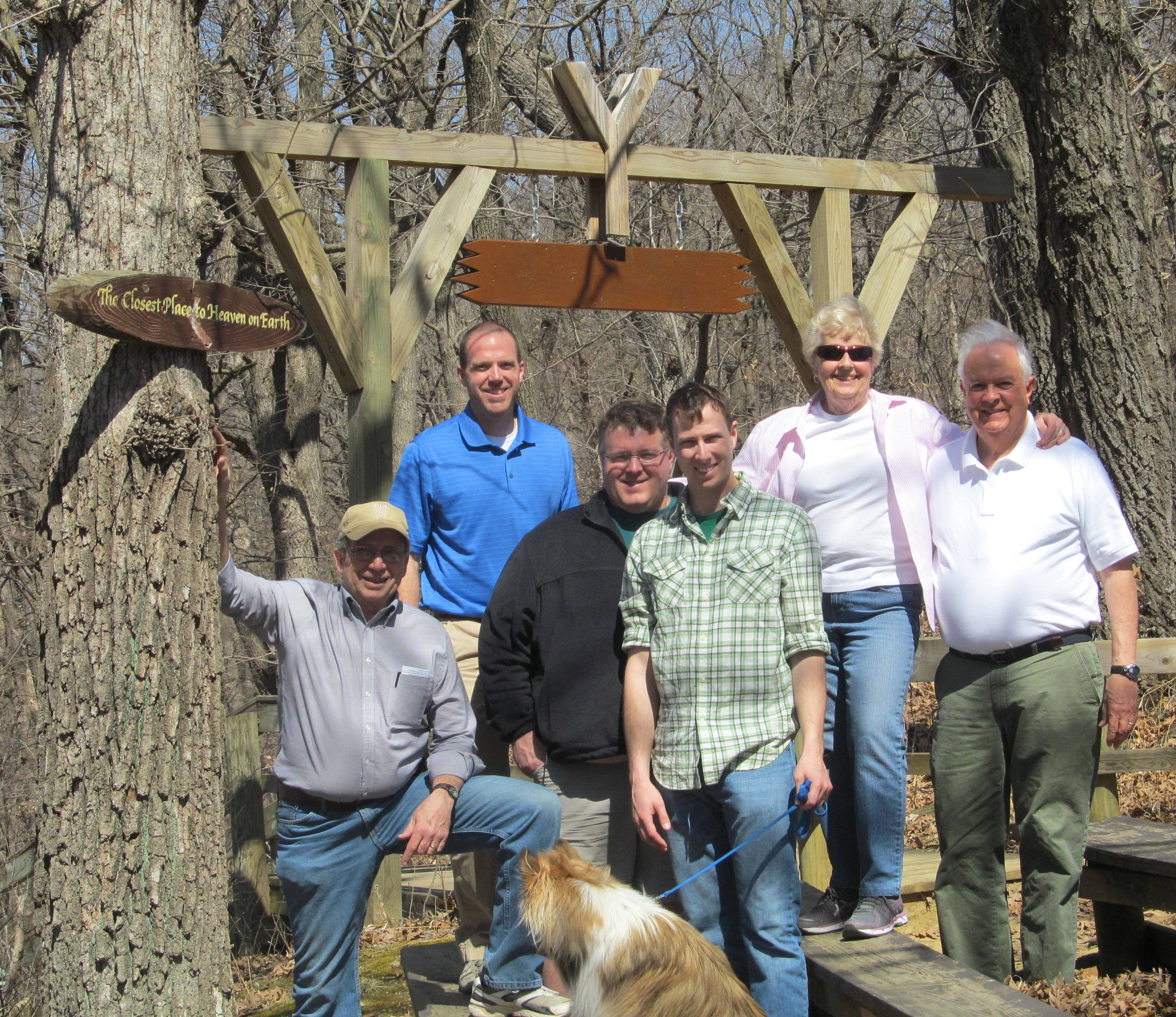 This year’s climbing crew was a small one. Here we are at the top (left to right) Chuck Offenburger, of Cooper; Jeremy Dyvig, executive director of the YMCA Healthy Living Center in West Des Moines; Dave Sherry, Y-Camp director; Alex Kretzinger, director of the summer camp program, and Ellen and Chuck Corwin of the Des Moines area. 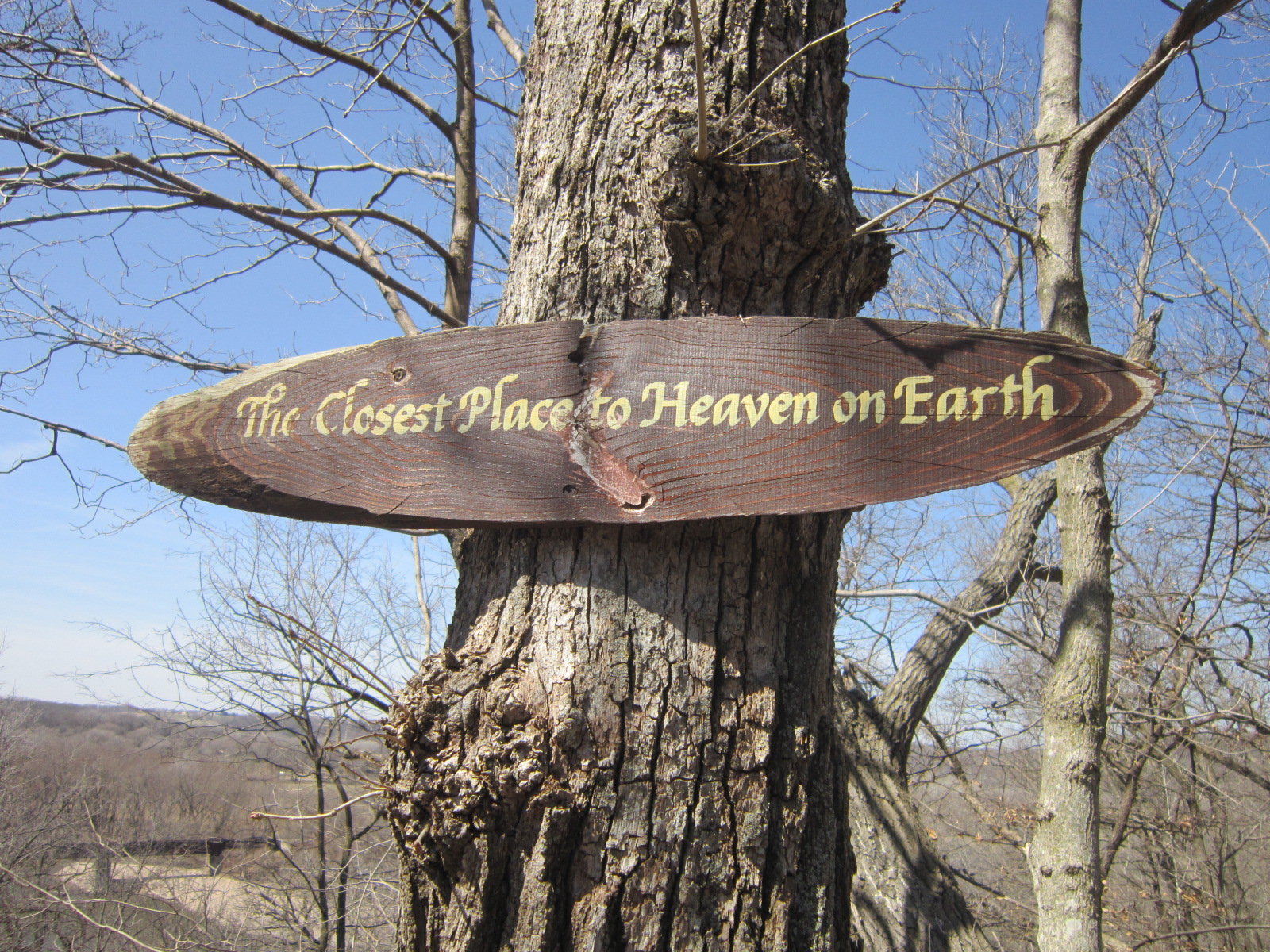 The sign on the tree at the top of Chapel Point. 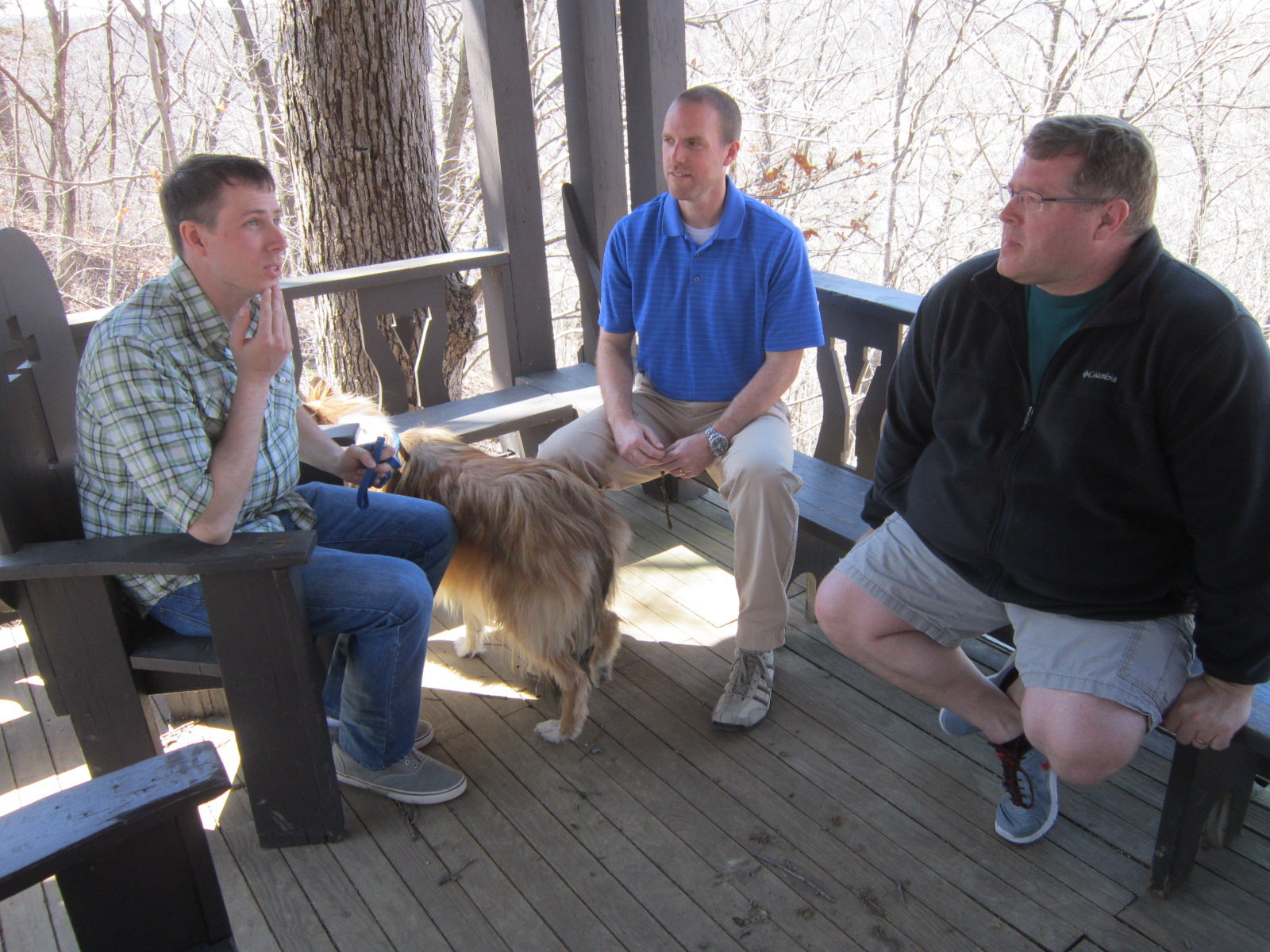 Y guys at the top — Alex Kretzinger, Jeremy Dyvig and Dave Sherry started the conversation in the Chapel Point shelterhouse. 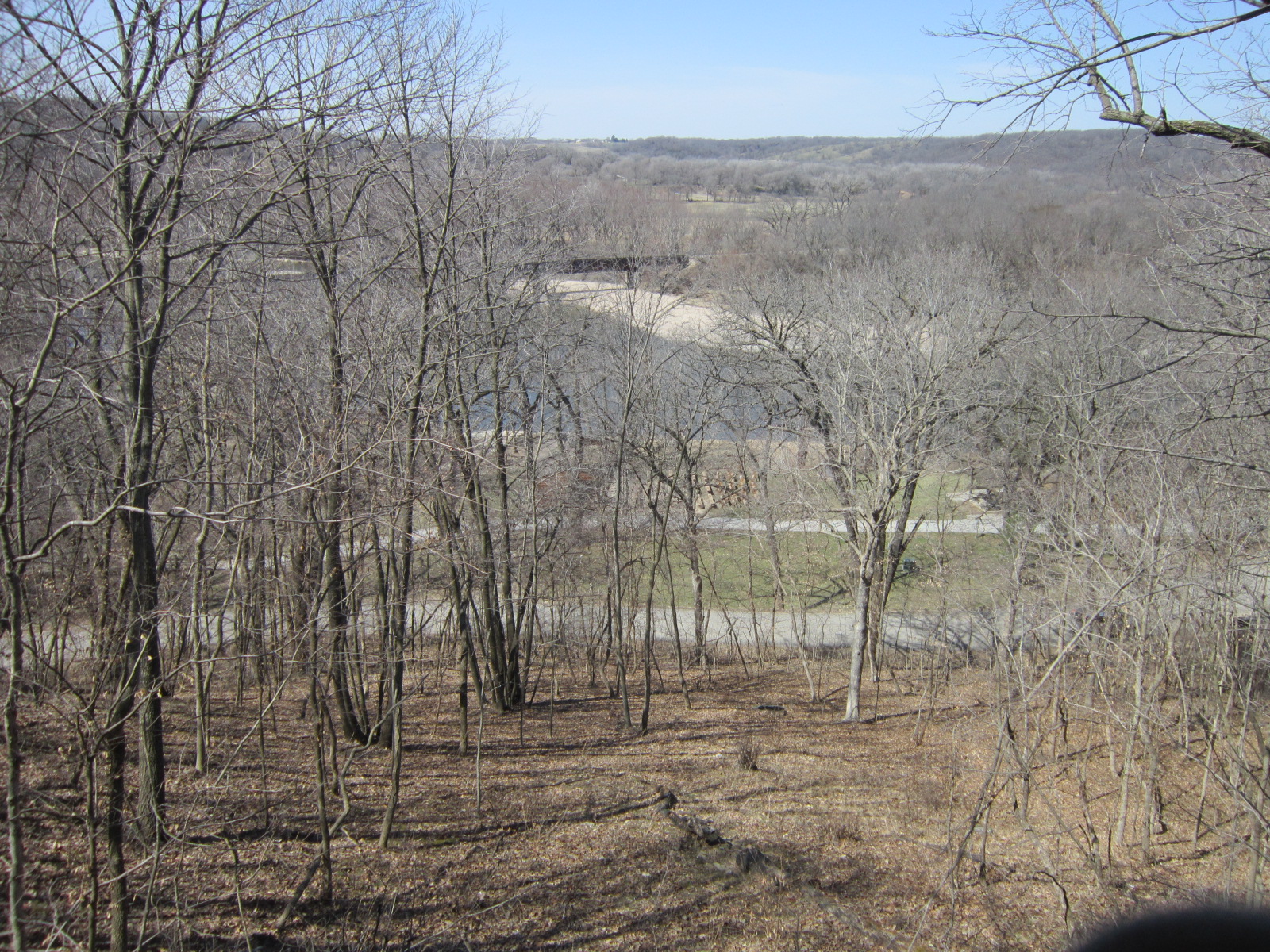 The big view of the Y-Camp below, the Des Moines River, its wide valley, and the bridge of the Boone & Scenic Valley Railroad crossing the river. 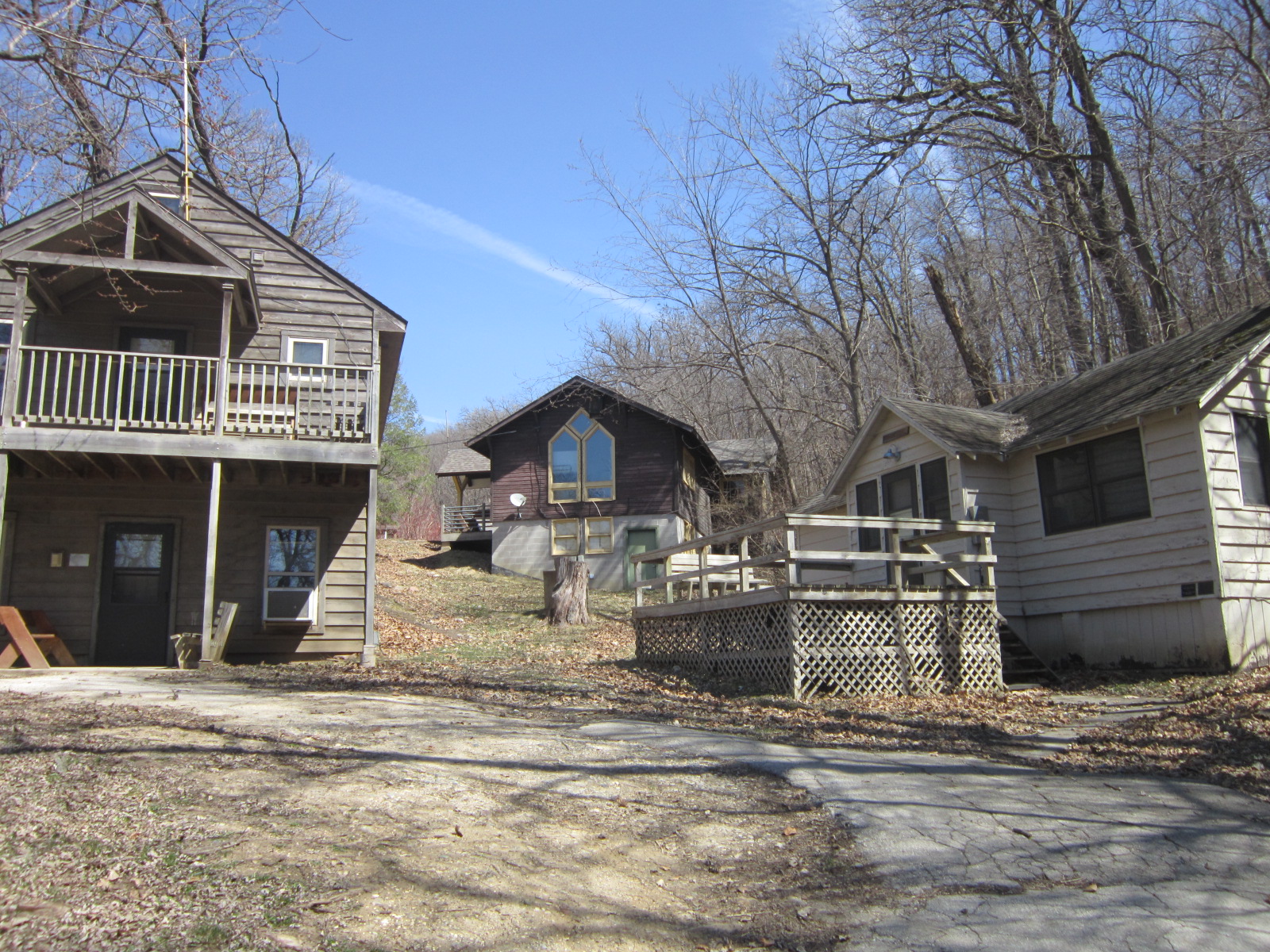 The Y-Camp’s cabins are pretty quiet right now, but there will be 5,000 campers use the facilities before this year is over. 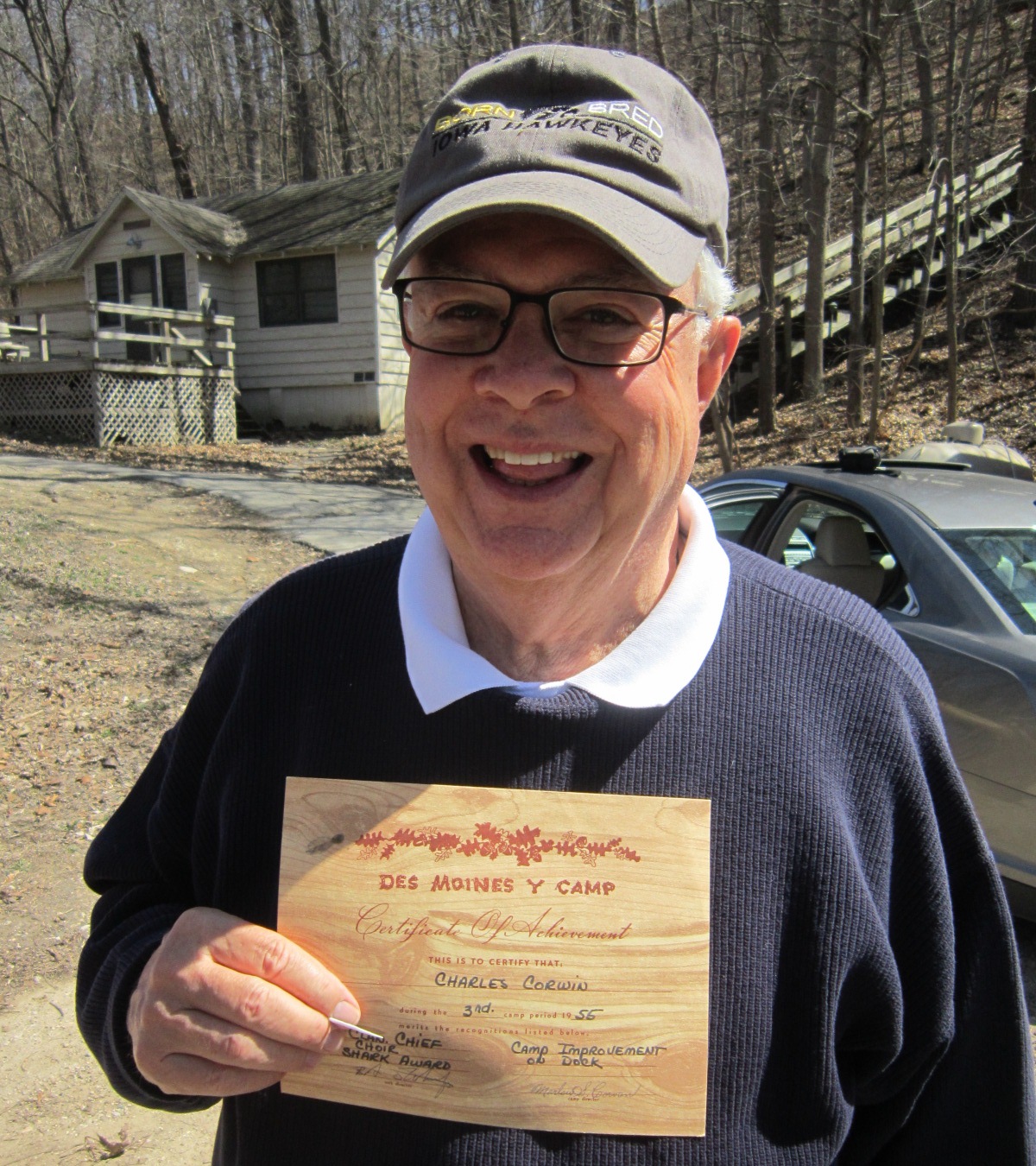 Our pal Chuck Corwin, of the Des Moines area, shows off the camping awards certificate he was presented when he was a Y-Camper in the summer of 1955.  He also found a receipt showing that his parents had paid about $28 for his week-long camping experience then! 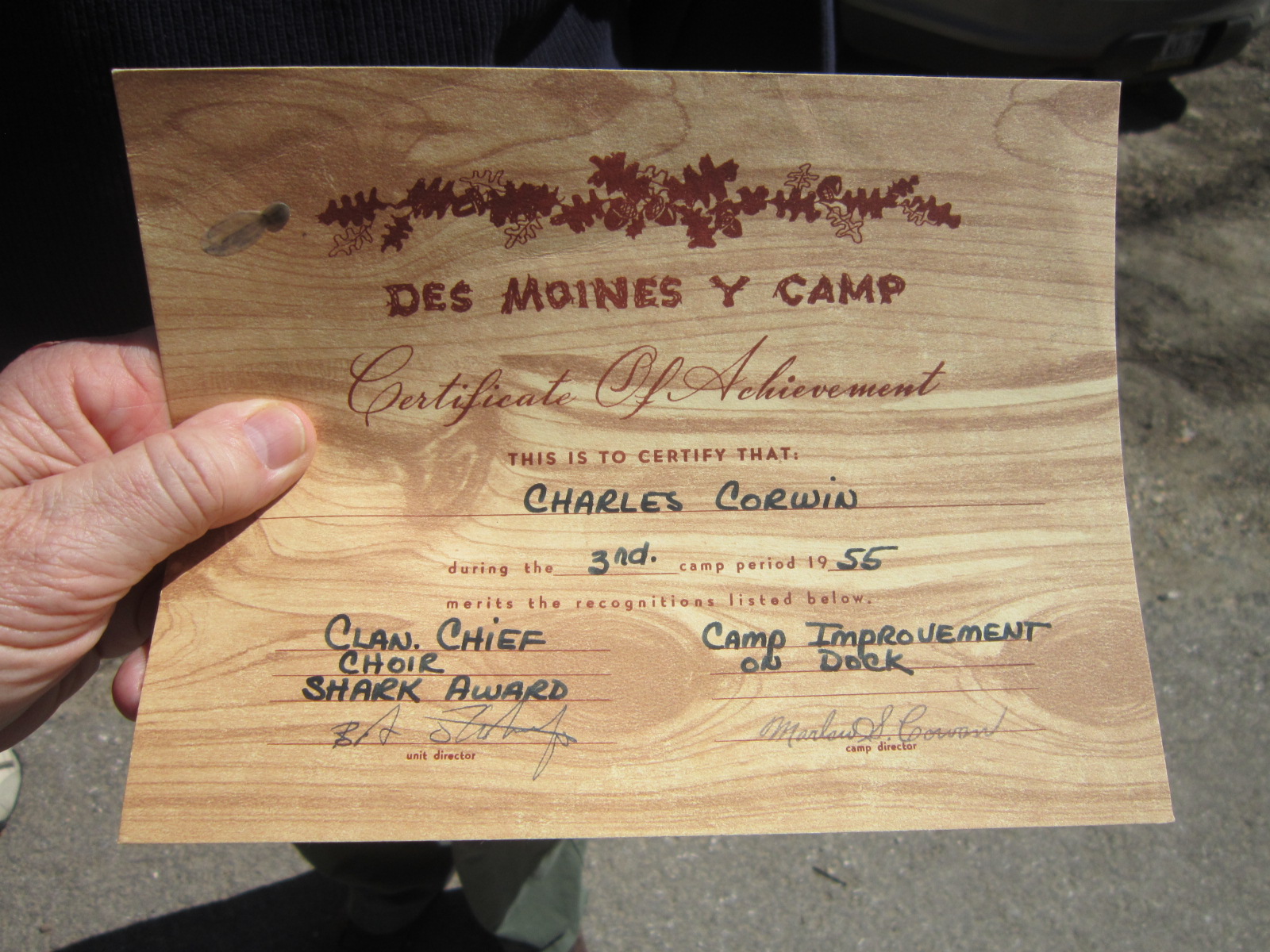 Let’s get the close-up details of those awards our friend Chuck Corwin won as a Y-Camper in 1955. 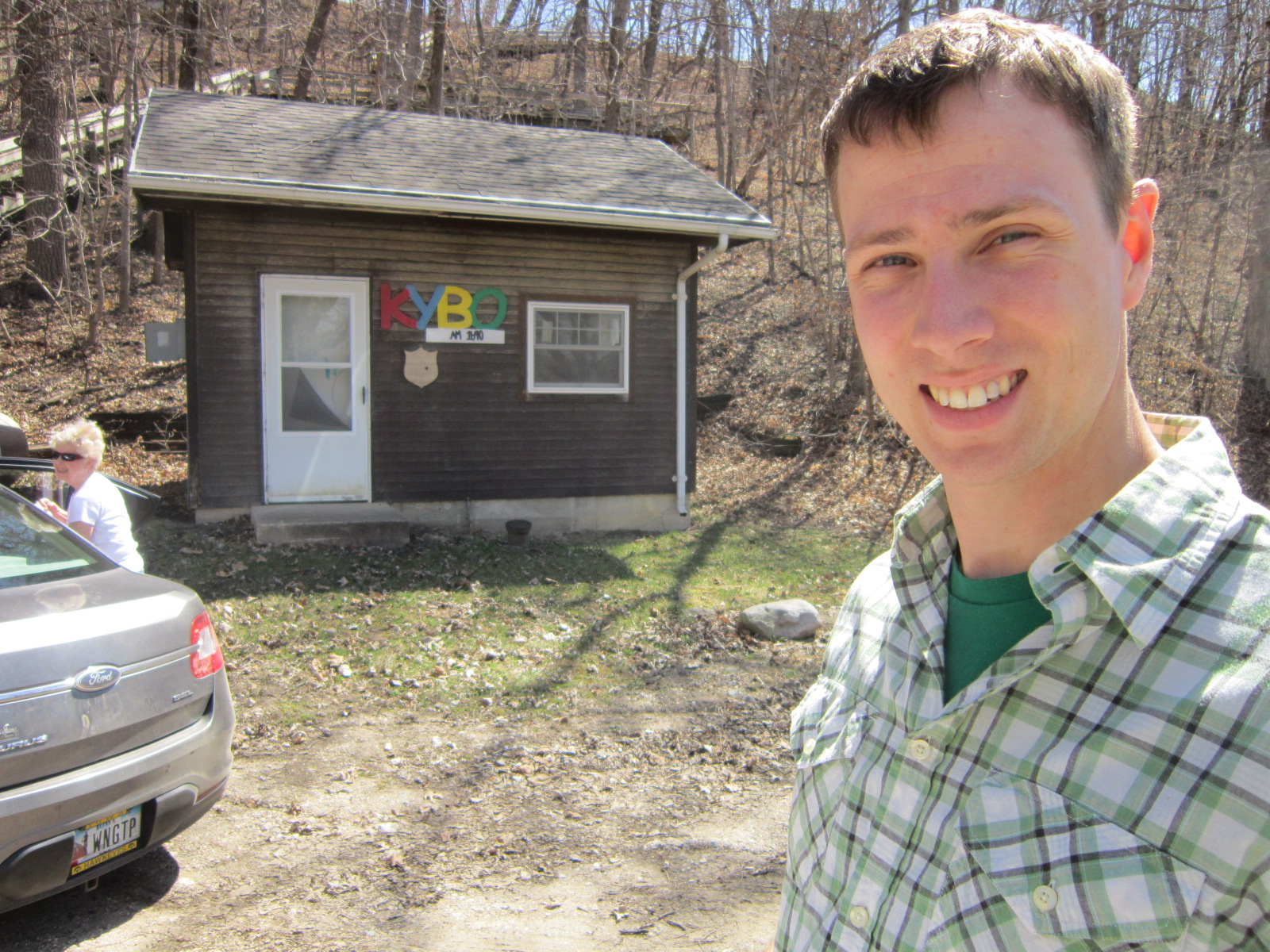 Alex Kretzinger, who directs the summer camp program, is shown outside the cabin that is headquarters for “KYBO Radio,” an actual radio station that reaches only the cabins at the Y-Camp.  It allows staff to give daily updates while campers are having rest times or other breaks.  We were laughing with Kretzinger that KYBO could pretty easily go online and have 24-7 Y-Camp radio available worldwide.  It’d probably have a loyal following! 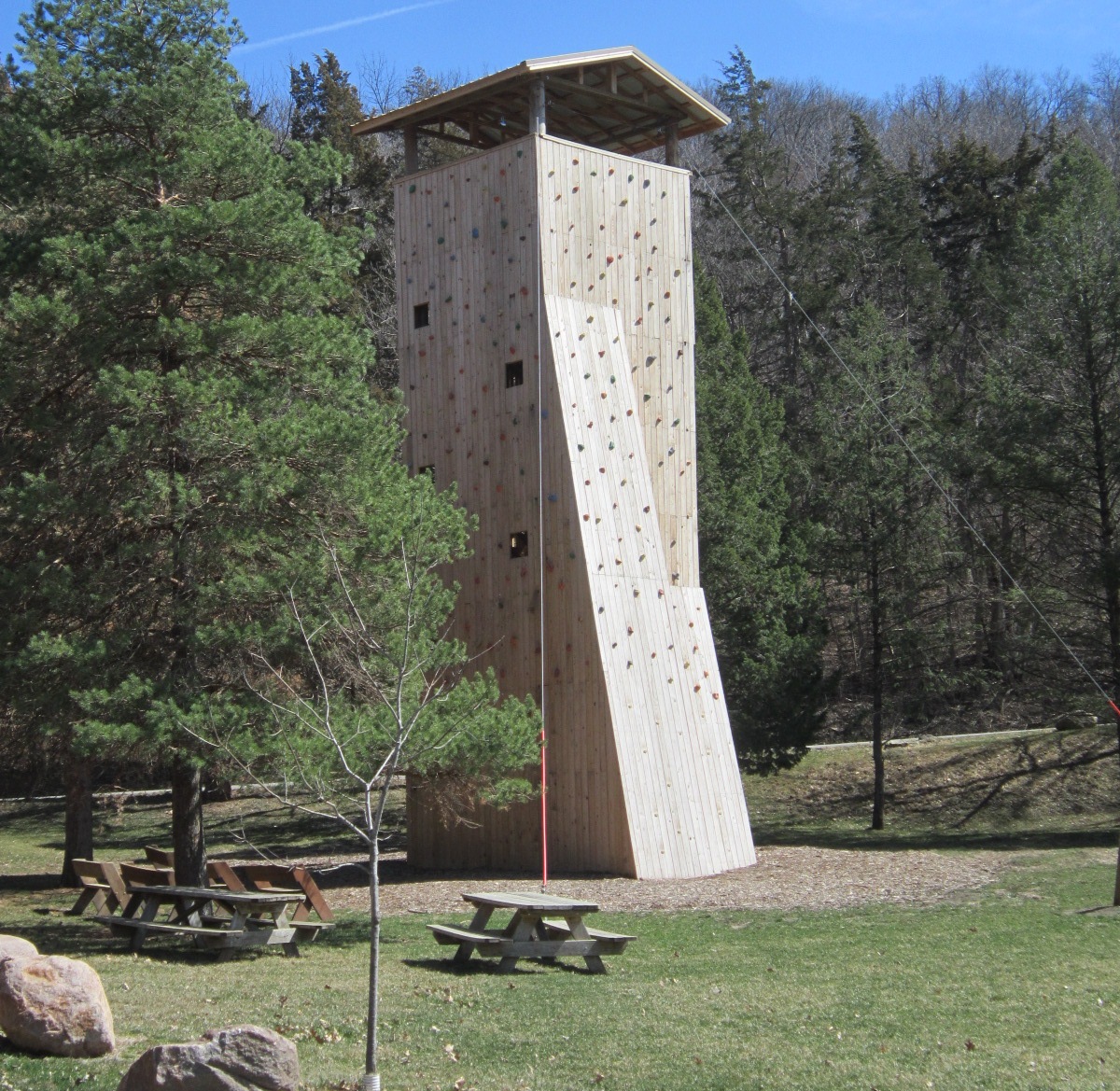 The climbing tower for the daring at the Y-Camp. 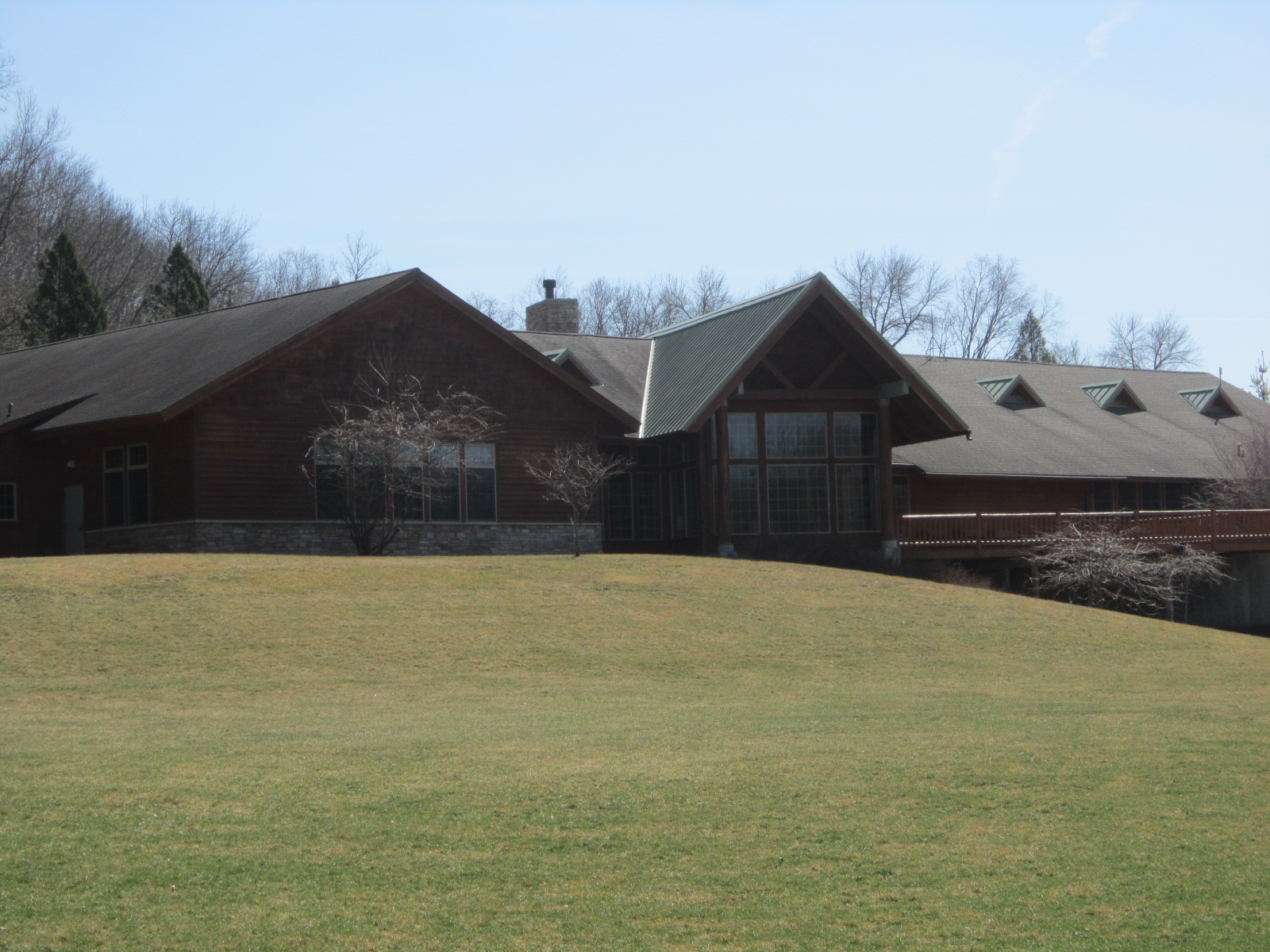