JEFFERSON, Iowa, April 13, 2015 — I kept turning to my wife Carla Offenburger on my left and my neighbor Karen Lawton on my right and saying, “I’ve never heard that musical instrument played like that before.” And the truth is, I hadn’t.  We were all hearing some of the finest jazz players in the world, performing with New York City’s famous Vanguard Jazz Orchestra, but this time playing right here in our gymnasium in our Greene County seat town of Jefferson on Thursday, April 9.  It was one of the finest events that has happened in at least the 10 years we’ve lived here.

“We’re all here because of Jack and Marcella Oatts and these four children they brought into the world,” John Mosca, the director of the orchestra and lead trombone player, told the crowd after the first number.

Four of Jack Oatts’ biggest star performers were his own kids — trumpet player Jim, saxophone player Dick, singer Sue and saxophone player Nancy.  Now, 40-plus years later, Dick is artistic director and lead sax player in the Vanguard Jazz Orchestra.  Nancy, who has become a graphic designer, is married to Mosca, the Vanguard director. Jim has led the Des Moines Big Band and taught.  Sue is still singing in the Twin Cities.  All the musical Oattses performed here in the concert, and Nancy designed all the promotional material for it.

“One of the neatest things for me,” Dick Oatts told the crowd of about 750 between numbers, “is to have this family (he motioned toward the band) meet my family here (he waved toward the audience).”

Another nice moment was when Mosca, after one particularly popular number, looked up above and said, “I think Jack’s up there smiling tonight.”

There were so many great music moments it’s impossible to list them all.  If I had to pick one high point, it was the trumpet solo work by Freddie Hendrix in a jazz “boogaloo” number by the late, great Thad Jones, called “Central Park North.”  But there was justified hometown pride when we could all see and hear that “our Oatts kids” are indeed as good as the other phenomenal musicians in the Vanguard Jazz Orchestra.

Music fans were in attendance from across the state and beyond, and many alumni of high schools in this area came back for the concert, too.  Lots of them had been in Jack Oatts’ bands decades ago, or played in his Jazz Festivals here.  There was an “after-glow” party held at the Elks Club after the concert, attracting the musicians and many from the audience.  Reports are that there was high-spirited visiting until after 1 a.m.

So the concert was an artistic, financial and social success, and for that, the Beta Tau Delta charitable sorority in Jefferson is due a genuine “thank you” from all of us.  Their imagination, daring, persistence and organizational skills made the wonderful event happen.  They had generous financial support from three major sponsors — Home State Bank, McFarland Clinic and West Central Cooperative — and about 20 other financial contributors.  So thanks to them, too.

If you want to know more background about the Oattses and the Vanguard Jazz Orchestra, please go to our preview story, right here.  And you can enjoy a dozen photos from the concert below here. 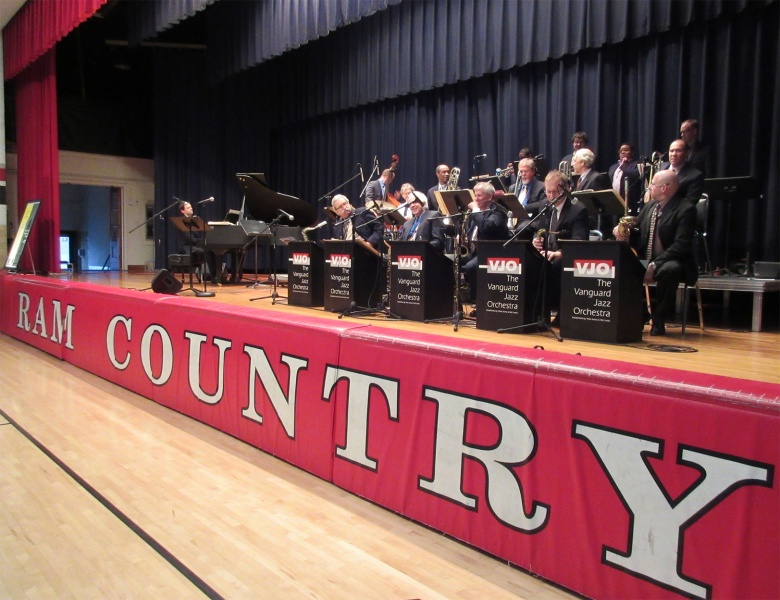 And there they were — the Vanguard Jazz Orchestra, one of the world’s finest jazz bands, performing in the Middle School gymnasium right here in Jefferson IA! 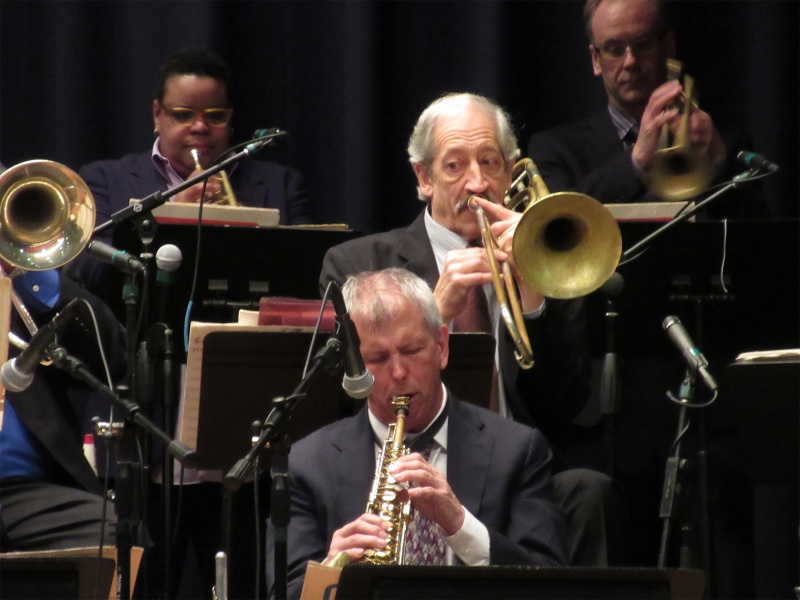 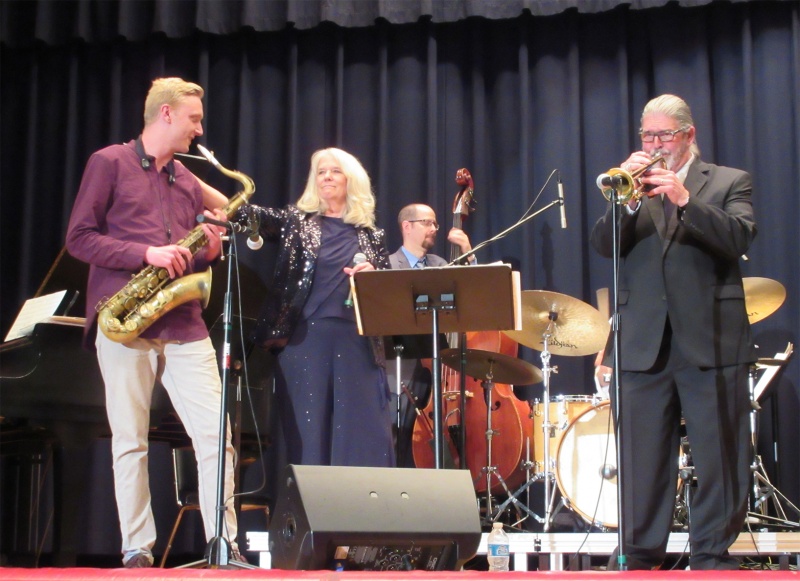 There were several great moments at the end of the concert when a third-generation Oatts family member, Eric Oatts (left), of Lawrence KS played a number with singer Sue Oatts of Minneapolis and Eric’s dad Jim Oatts (trumpet) of Des Moines, backed by the Vanguard Jazz Orchestra. Eric Oatts is a graduate student in music at Kansas University. 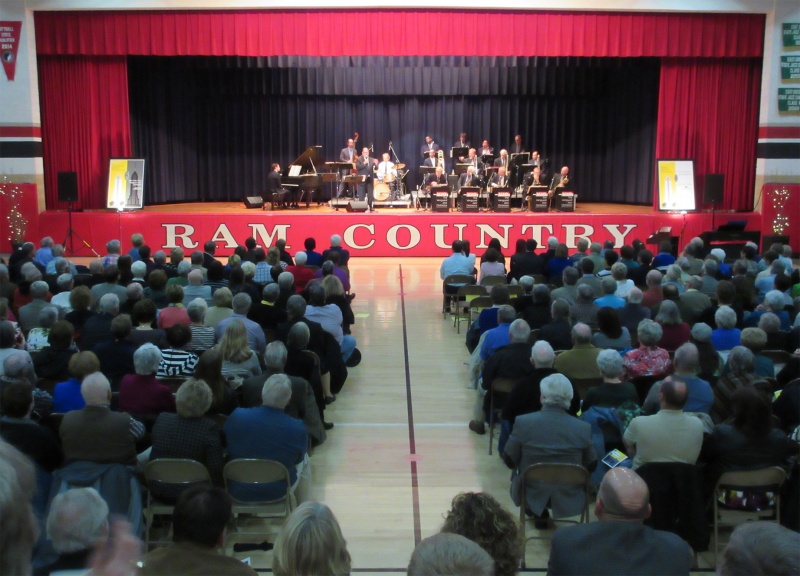 It was a great crowd in the Middle School gymnasium for the Vanguard Jazz Orchestra’s performance. I haven’t heard the official crowd count yet, but it had to be 750 or more. 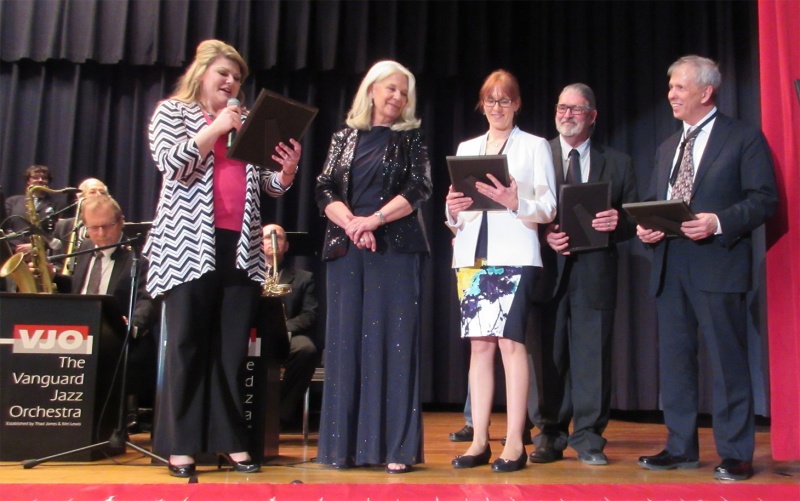 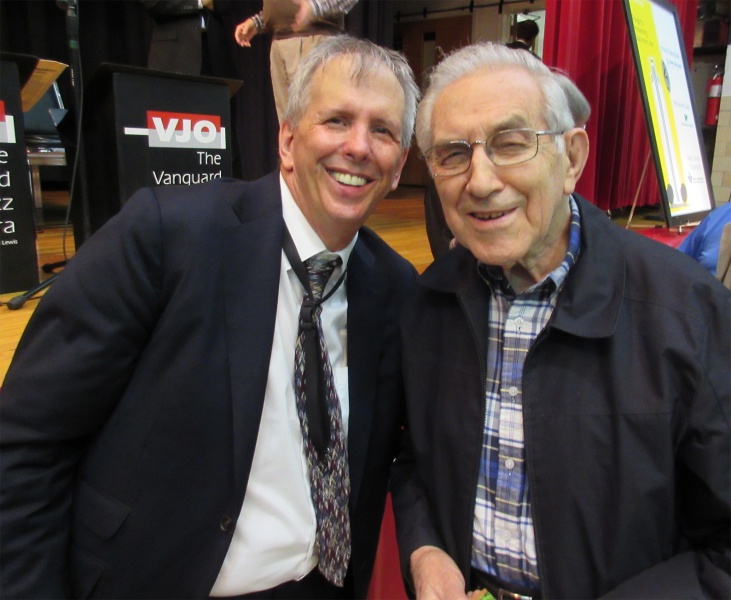 After the concert, legendary sax player Dick Oatts (left), the Jefferson native who now stars with the Vanguard Jazz Orchestra, had a warm hello with Marvin Krause, now of Des Moines, who was a high school classmate and bandmate in Radcliffe IA of Dick’s dad, the late Jack Oatts. 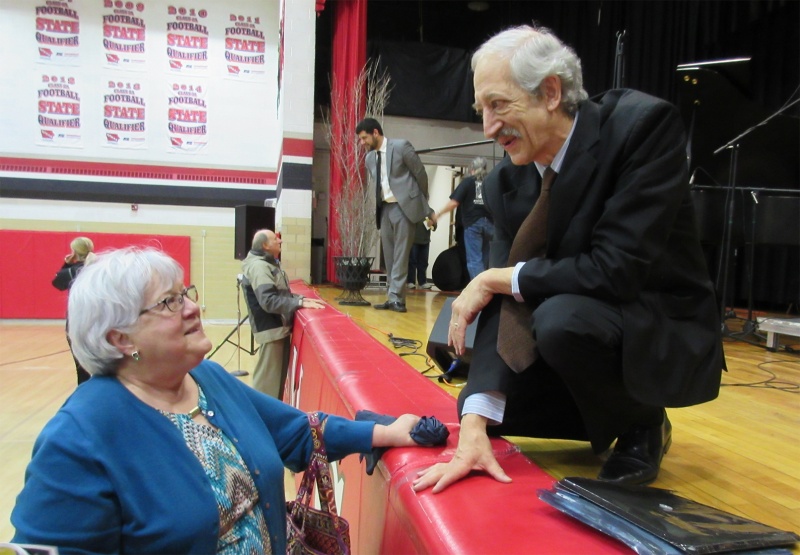 John Mosca, the director a trombone player in the Vanguard Jazz Orchestra, chats with a fan after the concert. Mosca, a New York City native, is married to Nancy Oatts, who grew up in Jefferson. 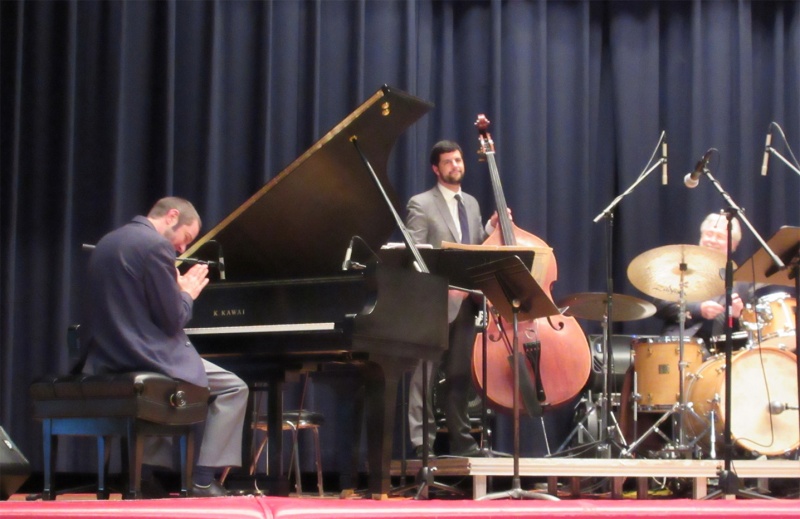 Tanner Taylor (left) acknowledges the applause from the hometown crowd in Jefferson IA Thursday night. He led the Tanner Taylor Trio in a brief performance before the Vanguard Jazz Orchestra’s concert.  Taylor, a 1999 graduate of Jefferson-Scranton High School, played with the Jack Oatts Quartet when he was in his school.  Thursday, the trio’s bass player was Eric Krieger and the drummer was Jim Eklof, both of Des Moines and members of the Des Moines Big Band. 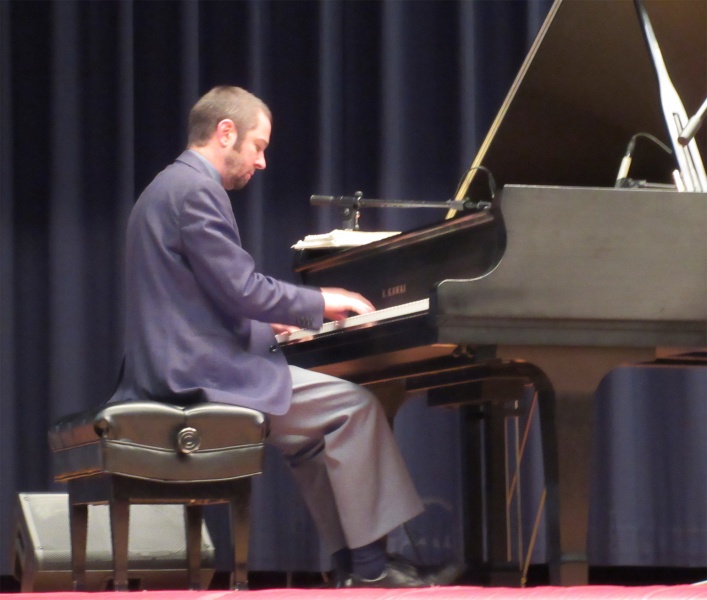 Tanner Taylor now lives in Ames, sells pianos and performs frequently with jazz groups from Minneapolis to Kansas City.  He is also a partner in a Twin Cities jazz club that offers live music six nights a week. 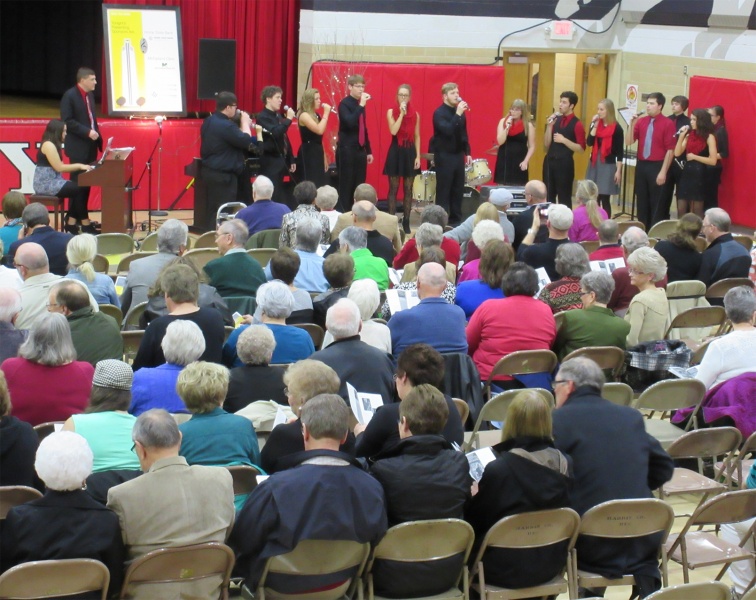 The Greene County High School Jazzatonics led off the Thursday night concert, which was held in the Middle School gymnasium in Jefferson IA. 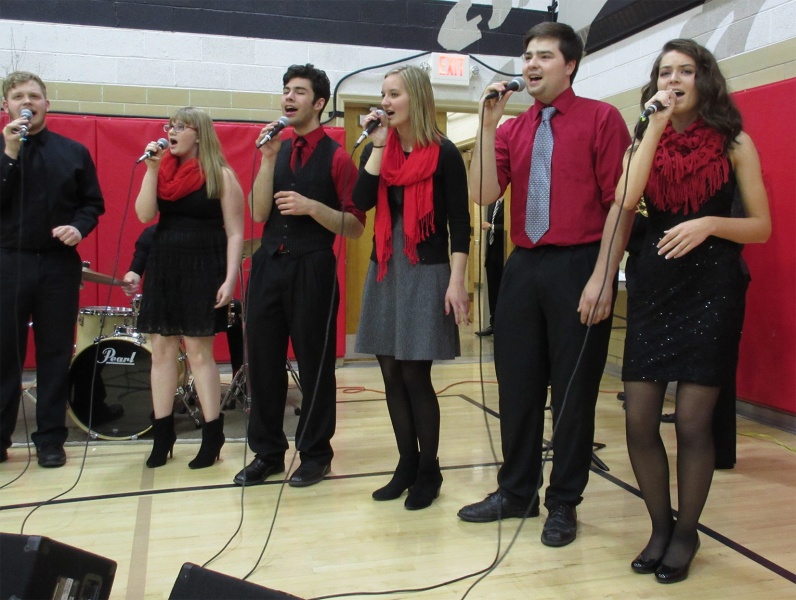 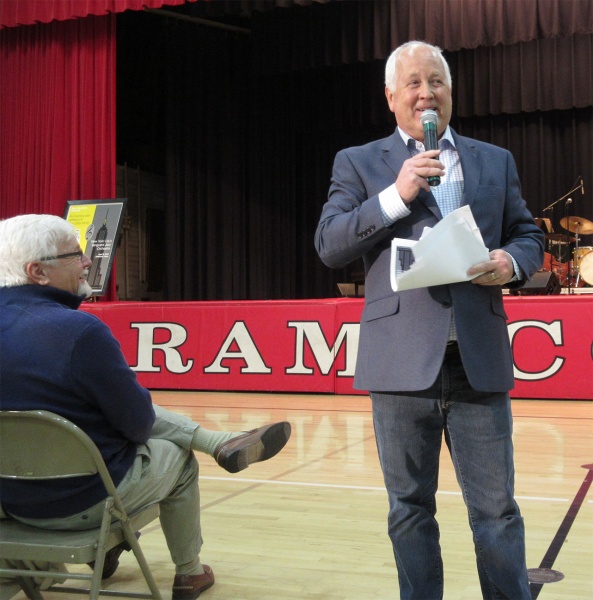 The concert Thursday night could not have had a better emcee than Terry Rich, a Jefferson High School graduate and now CEO of the Iowa Lottery. 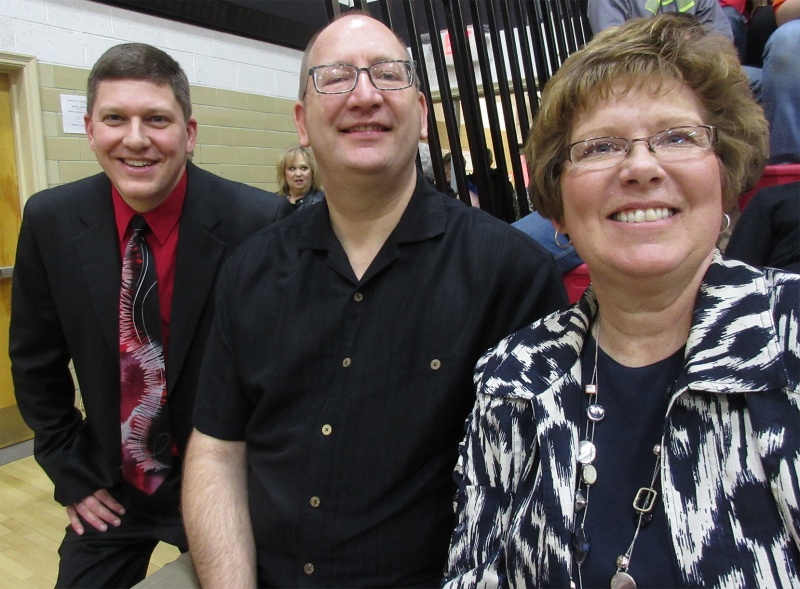