This weekend of June 10-12 in our county seat town of Jefferson, Iowa, our annual Bell Tower Festival is celebrating the 50th anniversary of the Mahanay Memorial Carillon Tower. It made me think back to a column I wrote 30 years ago right now for the Des Moines Register, telling the story of the man who had a vision for a 168-foot-tall bell tower to be built on the courthouse square in his hometown.  My Register protégé Kyle Munson, the current Iowa columnist, found the old column for me, and we offer it here as a “Blast from the Past” and a salute to Jefferson on its big weekend. Here’s the column as it appeared in the Sunday Register of June 8, 1986.

JEFFERSON, Ia.  – I came here to learn about Jefferson’s Bell Tower Festival, which is emerging as one of Iowa’s better community celebrations and which is expected to draw 10,000 people next weekend to this central Iowa town of 4,800.

But what I really learned, once again, was how intrigued I am by eccentric old coots, more than a few of whom have been sons of the Iowa soil.

Mahanay was born here 100 years ago and died in 1947.  He made a fortune selling surgical supplies and speculating in farmland. 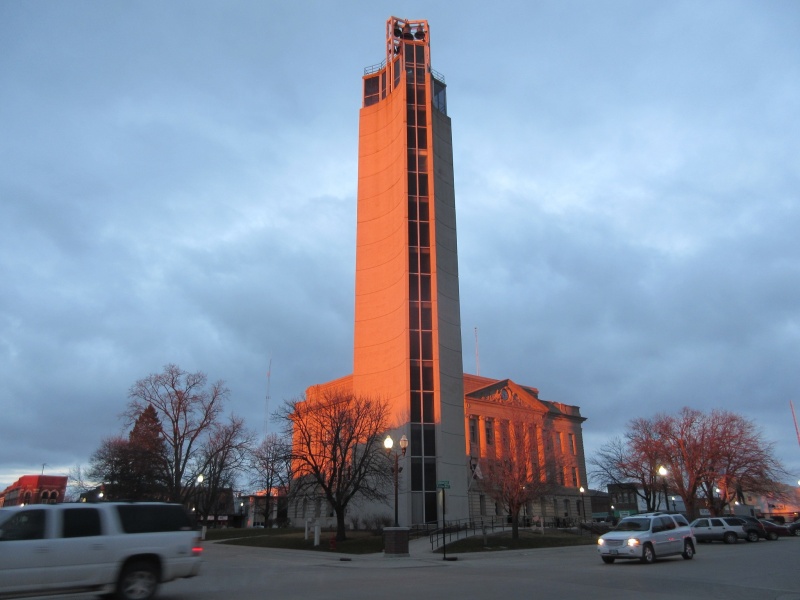 The Mahanay Memorial Carillon Tower on the Greene County Courthouse square in Jefferson, shown here in a late winter photo in 2016 when the late-afternoon sun was playing on the tower.

It was “like a bombshell,” folks here now say, when they learned after his death that this man who generally had been regarded as “tighter than bark on a tree,” had left $350,000 to the community to build the 168-foot bell tower on the courthouse lawn.

From the stories told by two of Mahanay’s old pals, lawyers Lumond Wilcox and Francis Cudahy, the guy must have been a real piece of work.

They recall his frequently used self-description: “When God made me, he lost the pattern.”

They talk about his super salesmanship.  Cudahy dug up a poem that one doctor wrote about Mahanay: “You know if you listen to his line/ You’ll be in a helluva fix/ For he’ll sell  you another stethoscope/ Although you already have six.”

Cudahy has written how Mahanay added to his nest egg each year by buying an insurance policy on his birthday, prepaying the premiums.  After his death, his widow Dora and Cudahy looked everywhere for the policies.  Finally she found them I a paper sack tucked inside an incinerator.

The man was so sold on the idea that travel broadens one’s perspective that, in his will, he left money to two nephews, but only on the condition that they travel to either Florida or California before they could collect it. 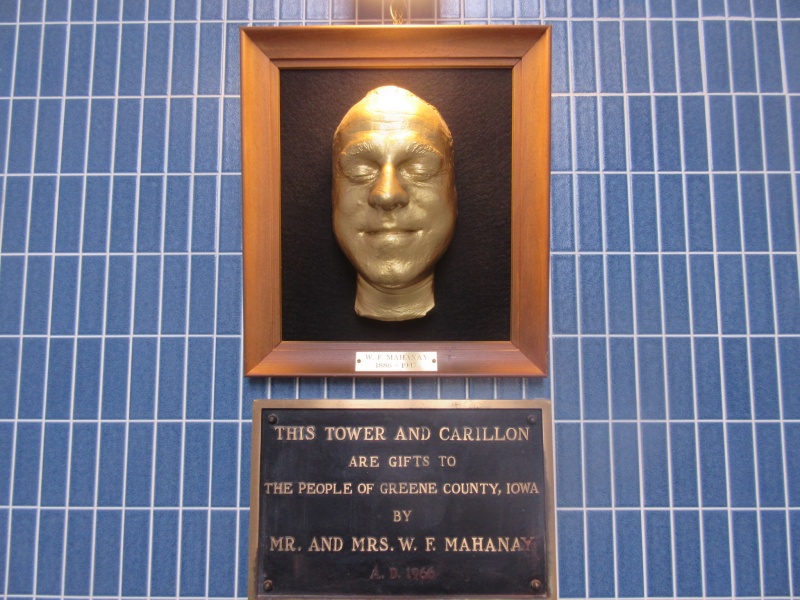 The death mask and plaque, still hanging on the wall of the lobby of the Mahanay Memorial Carillon Tower in Jefferson.

It’s a Mahanay story that few Jeffersonians really know, despite the fact that the bronzed mask itself, which is the likeness of Mahanay, hangs in the lobby of the tower.

“He was obviously a guy who wanted t be remembered long after he was gone,” said Wilcox. “So he decided he wanted one of those death masks made.

“I suppose it was back in 1936 or 1937, he got these two young kids around Jefferson, Gordon Elliott and Darwin Tucker, to help him make one.  Elliott was an artistic sort, even then, and he’s gone on to become an art director for several magazines.  And Tucker was later president of Meredith Publishing in Des Moines.

“But then they were kids.  They stuck straws in Mahanay’s nose so he could breathe and then coated his face with plaster of Paris.  What they didn’t know was that the plaster would be so hot itwould burn heck out of him, and that as it dried and hardened, it would shrink.  When it did that, it not only squashed the straws and almost suffocated him, but it also pulled his eyebrows right out of his skin.”

Nevertheless, the mask was completed.  It was tucked away in Mahanay’s basement, to be rediscovered years later by Cudahy, who had it bronzed and hung in the lobby.  Now the public is welcomed to the tower by a mug with a smile that belies the pain involved in its making.

Following the detailed instructions of Mahanay’s will and building the tower, which was completed 20 years ago, was a matter of considerable local controversy, of course.

But it has proved to be the attraction that Mahanay knew it would be. An average of 8,000 people a year jump off nearby U.S. Highway 30 to drive into the community and see it.  Its observation deck offers a view of 14 towns in three counties. 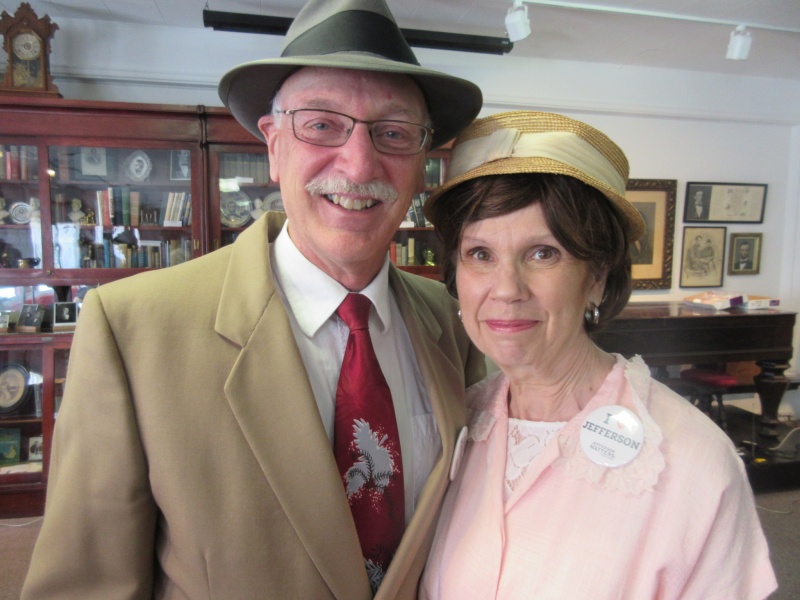 In 2016, the 50th anniversary of the Mahanay Memorial Carillon Tower in Jefferson, Floyd and Dora Mahanay, who have actually been deceased since 1962 and 1947 respectively, have been showing up for programs celebrating the tower’s long history.  They have been portrayed by Don and Bonnie Orris, of Jefferson.

In its shadow next weekend will be all kinds of fun and frivolity, including a Friday night rock ’n’ roll dance played by the Rumbles, a huge parade Saturday morning, a country-western dance Saturday night and much, much more.

One event not to be forgotten is the fifth annual “corn throw,” as genuine a slice of Iowa life as you could ever hope to find.  Men, women, children and even the athletic mascots Herky and Cy will toe a line and see how far they can heave a hefty ear of Iowa seed corn.  The record is just over 228 feet.

“Of all the people I’ve seen throw in that event,” said Kevin Brooks, one of the festival organizers, “I think my favorite has been Bob Lounsberry, the Iowa secretary of agriculture. He’s a big guy, you know, and he uses this wild wind-up, and then throws it about three feet.  We’re all looking forward to seeing him do that again this year.”

Now, when you considerthat such hijinks have been at least indirectly inspired by old man Mahanay, it only goes to show again that eccentrics, for however much a pain they can be to live with, undeniably enrich the lives of the rest of us.”