JEFFERSON, Iowa, June 2, 2016 — A wonderful tradition that marks the end of another school year happened here Wednesday morning.  It was the 18th annual “Breakfast with the Band,” sponsored by Randy and Phyllis Bunkers, owners of our county seat town’s famous Bunkers Dunkers Bakery, home of the best glazed donuts in the world.

As always, about 8:30 a.m. on the last day of school, the marching band members from the Greene County Middle School were dismissed from classes, grabbed their musical instruments and gathered in the school parking lot.  They formed ranks, struck up a cadence and started marching behind a Jefferson police car.  Uptown and around the courthouse square they went, and then they stopped in the middle of Chestnut Street on the east side of the square, right in front of the bakery. There they played the school fight song, and were congratulated by the Bunkerses and maybe 100 local citizens.  Then big boxes of  glazed “donut holes” were brought out of the bakery, and everybody ate free.

Because Middle School band director Hanna Sundberg is leaving for a new band job in the North Polk Community Schools, there was a special presentation to her by Randy Bunkers of a much-coveted Bunkers Dunkers T-shirt.  Then after a few more minutes of donut holes and chatter, the band formed back up, pivoted and marched back for the final few hours of the school year — and then the start of summer!  You can see it unfold in the photos below here. 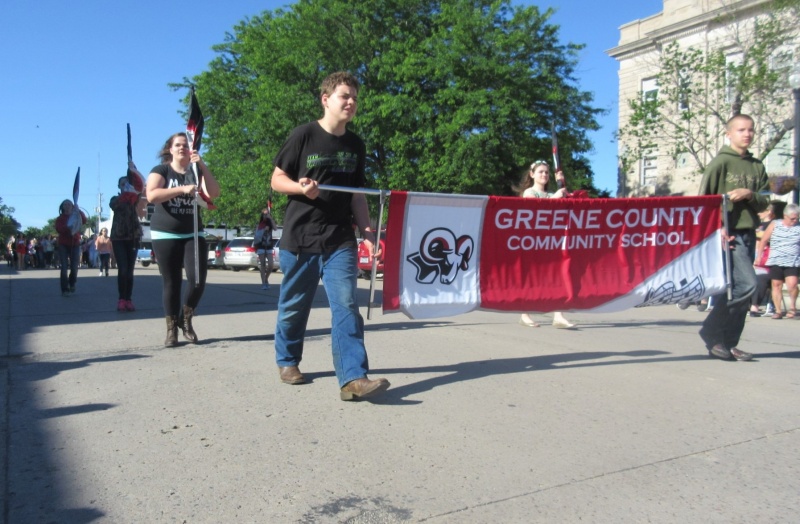 The start of another “Breakfast with the Band,” as the Middle School banner carriers and flag twirlers lead the band on to the courthouse square in Jefferson. 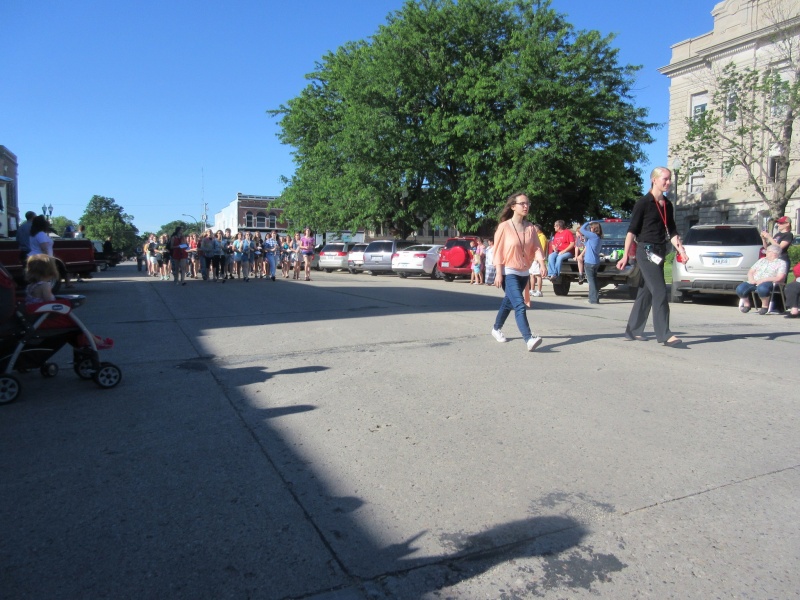 Middle School band director Hanna Sundberg (in black on the right) and the student drum major, out front of the band. 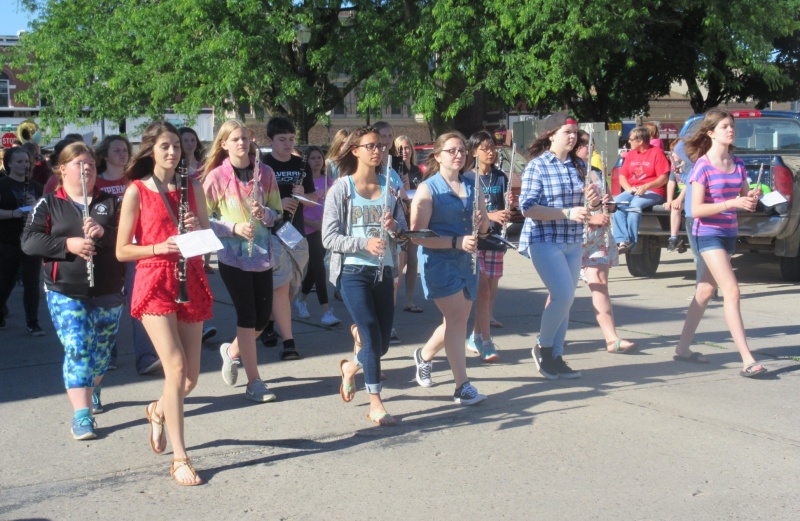 Here comes the band!  The “Breakfast with the Band” tradition started 18 years ago in a conversation between Matt Schutt, then the director of the Middle School band, and bakery co-owner Randy Bunkers, about how they could add some fun to the last morning of the school year.  “Eighteen years now,” said Phyllis Bunkers, “and we’ve never been rained out.” 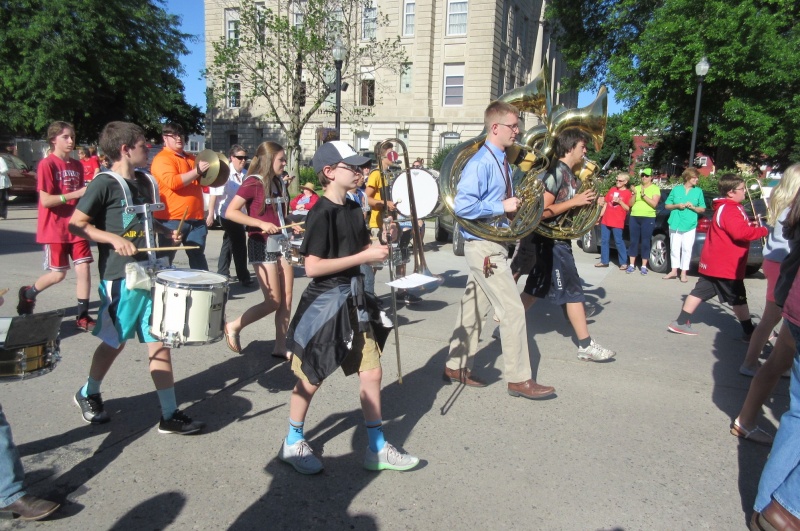 A few older musicians got into the Middle School band, too.  Some high school players helped out on some instruments, and Greene County High School band director Wes Anderson was marching and playing one of the tubas. 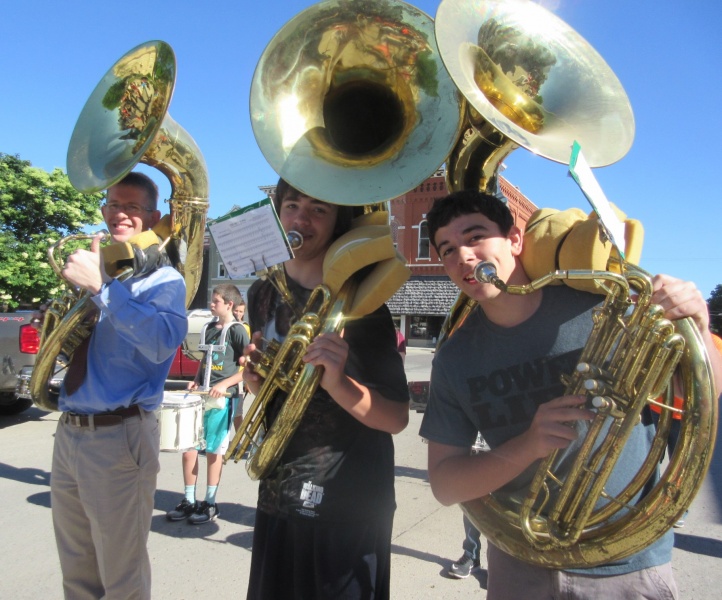 Who has more fun than tuba players in a marching band? 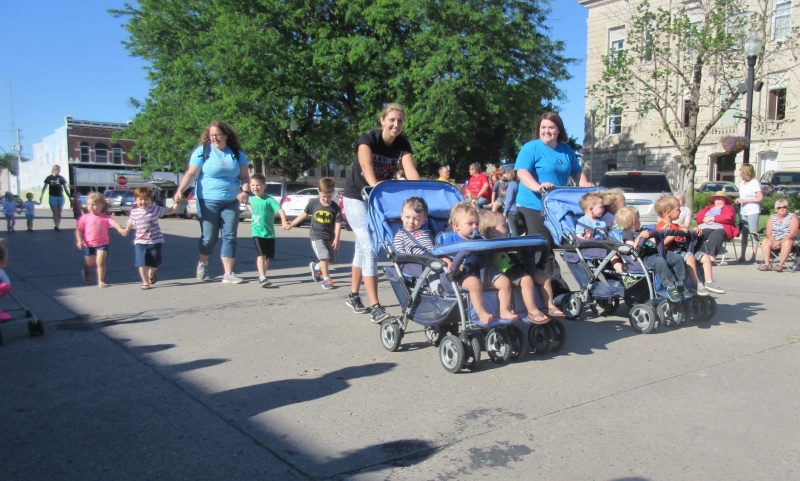 The kids and teachers from the Greene County Early Learning Center, located adjacent to the Middle School, joined the parade, too, following the band. 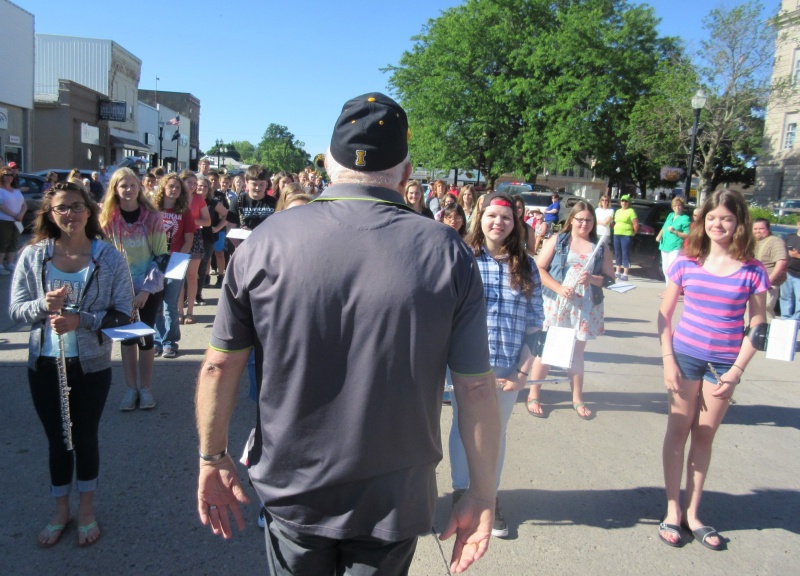 When the band stops in front of Bunkers Dunkers Bakery, the kids are addressed by Jefferson’s famous donut maker Randy Bunkers. 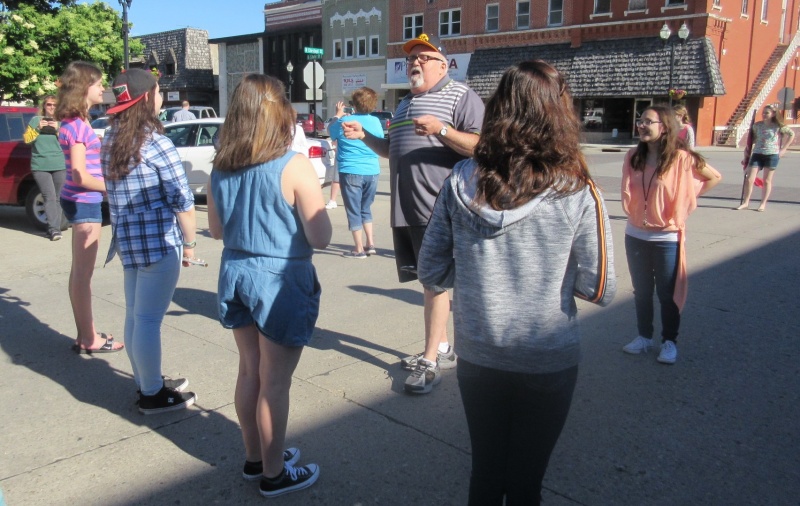 Randy Bunkers gets so wound up speaking to the band members, you’d swear he’s directing them, too! 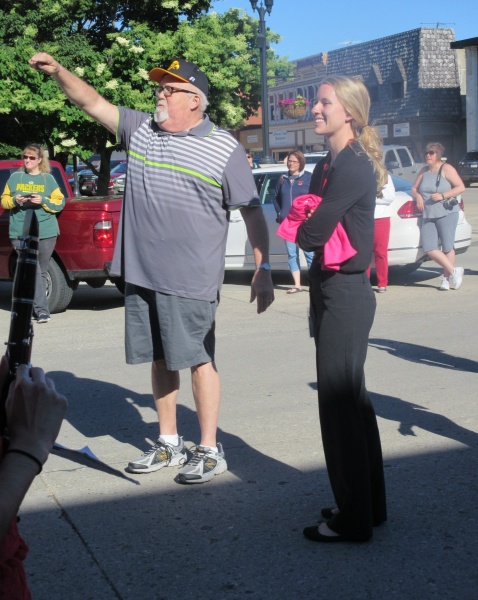 After presenting Middle School band director Hanna Sundberg with her Bunkers Dunkers T-shirt, Randy Bunkers takes a question from one of the young musicians. 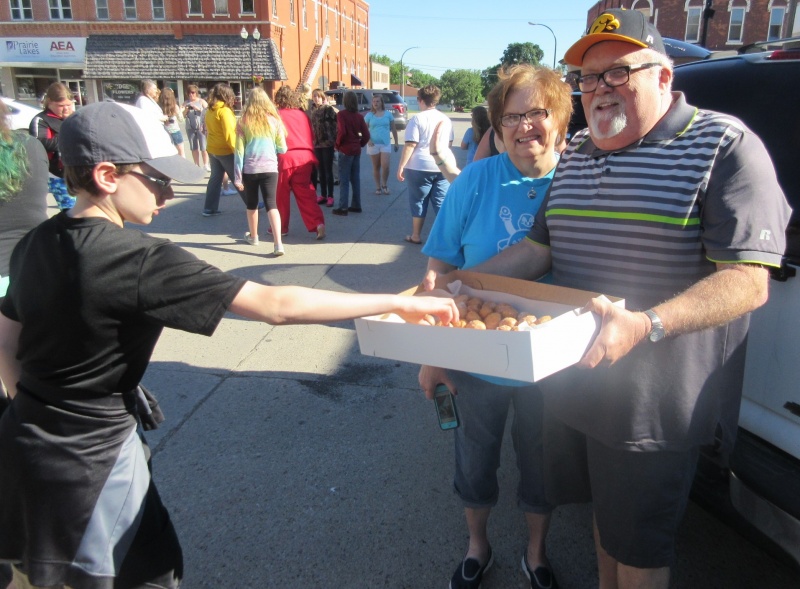 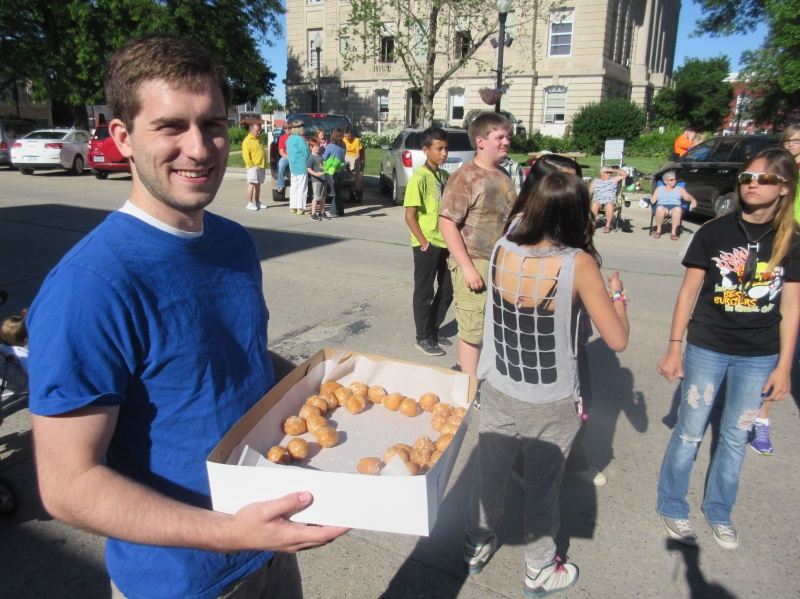 You never know when you might get pressed into duty during “Breakfast with the Band.”  Ben Teusch, a 2008 alumnus of Jefferson-Scranton High School, had just graduated with a master’s degree from Cornell University in Ithaca, N.Y., a couple days ago. He drove to his hometown of Jefferson, slept overnight, rode a bicycle up to the square to get a donut, and then realized it was band breakfast day.  Next thing he knew, Randy Bunkers had handed him a box of donut holes and told him to start handing them out to the musicians.  Later on Facebook, Teusch noted he marched in “Breakfast with the Band” a dozen years ago, and now he was handing out the treats. “I love my hometown,” he wrote.  He was continuing his driving trip to Orem, Utah, where he is starting a new job soon. 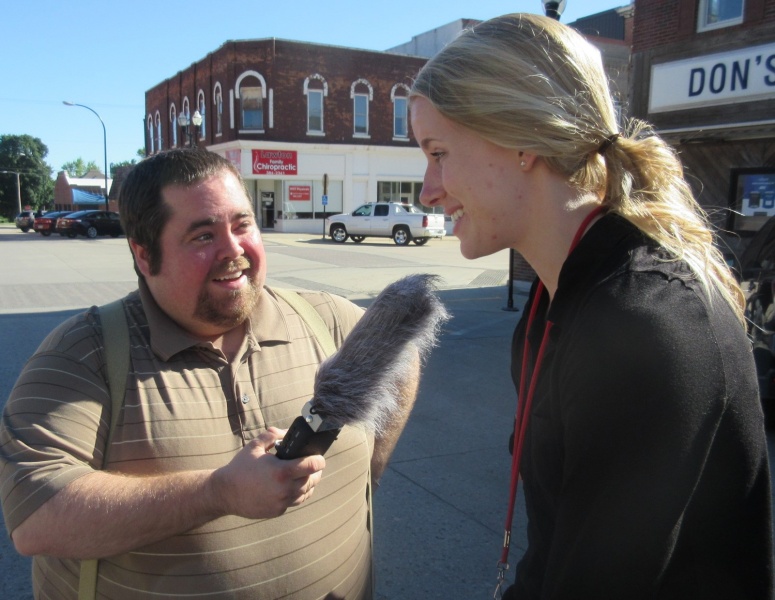 Middle School band director Hanna Sundberg does a farewell interview with newsman Coltrane Carlson, of KGRA radio in Jefferson, saying how she’ll “never forget my first students as a teacher” in Jefferson.  She’s joining the faculty at the North Polk Middle School next fall.