PEOSTA, Iowa, March 5, 2016 — “My health?” said the 91-year-old Father Jim O’Connor, our favorite monk, repeating the question. “Well, my body seems to be fine,” he continued, then holding his fingers up at the bottom of his ears, “but I think I’m about dead from here up. I can’t hear anything, and my memory really needs work.”

Carla Offenburger and I, scribbling our questions and comments to him on a note pad, assured Father O’Connor that he will always be our great friend and spiritual mentor, no matter how much age slows him. It was just great getting to spend a couple hours with him last Saturday, Feb. 27, at New Melleray Abbey, the Catholic Trappist monastery located 12 miles southwest of Dubuque. 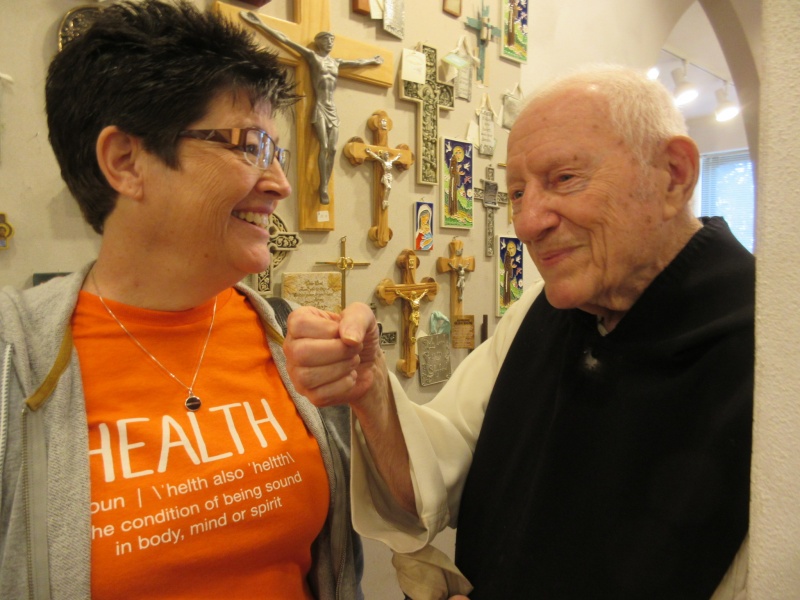 We figured out as we chatted that my friendship with him began 33 years ago, after I had been inspired and intrigued by the excellent weekly columns he was writing then in the Catholic Mirror, the newspaper of the Diocese of Des Moines.  They always included vignettes about the monks’ life around the abbey, which had a large farming operation then on its 3,000 acres.  There were always a few spiritual lessons weaved into those columns, too.  And they were very well written.  So in late July, 1983, I stopped by New Melleray after the RAGBRAI bike ride had ended in Dubuque, asked if I could meet Father O’Connor, and we’ve seen each other two or three times a year ever since.

I learned how he is a Chicago native who joined the Army Air Corps right after high school. He’d never even had a driver’s license, but he became a B-17 bomber co-pilot in Europe during World War II.  He never expected he’d survive.  He came home and used the GI bill for college, starting at Notre Dame and finishing at DePaul University, majoring in English.  He decided he wanted to dedicate himself to the service of God and humanity, and that led him to the monastic life.

He joined New Melleray in 1949, and worked first as a stonemason in helping build the abbey (“Great job for an English major,” he has quipped).  He was ordained a priest in about 1957.  Since then he has served as “sacristan,” arranging vestments and the sacraments for daily mass; also, the abbey’s mailman; for years he was the editor of the monastery newsletter, and he also used a lawn tractor to mow the 10 acres of grass around the monastery’s quadrangle of buildings.  As he was approaching 90, the abbott gave him a lighter schedule. “They decided at my age, heck, give the kid a little freedom,” Father O’Connor said.

When Carla Offenburger, who is not Catholic, came into my life, she came into Father O’Connor’s life, too.  So have several of our friends and family members, as well as the students in a couple of college classes we took to the abbey.  Ditto for 45 people on a bus tour group we led here.

We’ve said before: We have taken people of all faiths — as well as people of no faith — to New Melleray. And as far as we know, there hasn’t been any one of them who, when we left, didn’t feel that something profoundly important is happening in the ministry of  these 30 or so monks in residence here.

With their increasing age, the monks don’t farm any more.  Several work in the Trappist Caskets factory they operate, making beautiful wooden coffins from lumber grown in the abbey’s extensive timberlands. But during their long days, they also lead retreats for lay people.  And they pray and meditate in a half-dozen scheduled services and also in private contemplative times.

When we Offenburgers have gone through our cancer battles the last seven years, Father O’Connor anointed us — me three times, Carla twice — and we told him again on this last visit that we give him lots of credit for our recovery to good health now.

“I’ll tell you, I’m sure if I had anything to do with it, it was about this much,” he said, holding his right thumb and forefinger about a half-inch apart. “The good nature and the goodness of you two people have been part of it, too. But mostly it’s a result of you connecting with the Lord.”

He has seen us bounce back from cancer surgeries, extensive chemotherapy and radiation treatments, a stem cells transplant and more.  He is a cancer survivor himself, having recovered from prostate cancer a dozen years ago.

He told us a couple years ago, when we were in obvious good health on one of our visits, “I don’t know what God has in mind for you two, but it must be something. If I were you, I’d be listening very closely.”

What about him?  I told him last week that he seems to be at peace with the future.  Is he?

“Well, I’ve never really thought of that before,” Father O’Connor said. “At 91, I have nothing to worry about.  My future is taken care of.”

I’m sure it’s a good one.  And he seems even more certain of that. 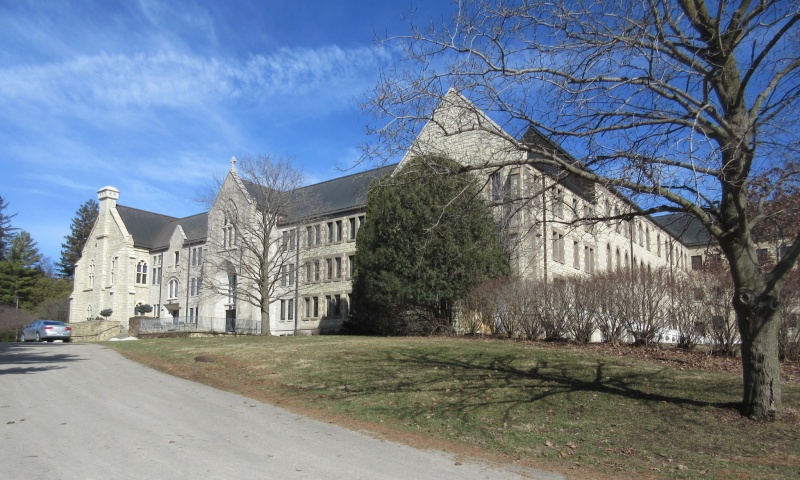 New Melleray Abbey, a Catholic monastery, was founded in 1849 by the Trappist order of monks. 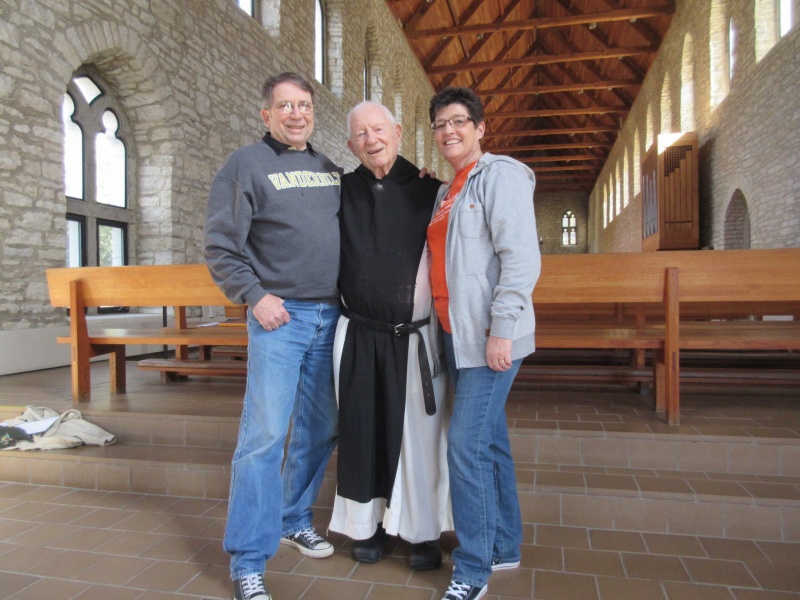 With our great friend and spiritual mentor Father Jim O’Connor in the church at New Melleray Abbey. 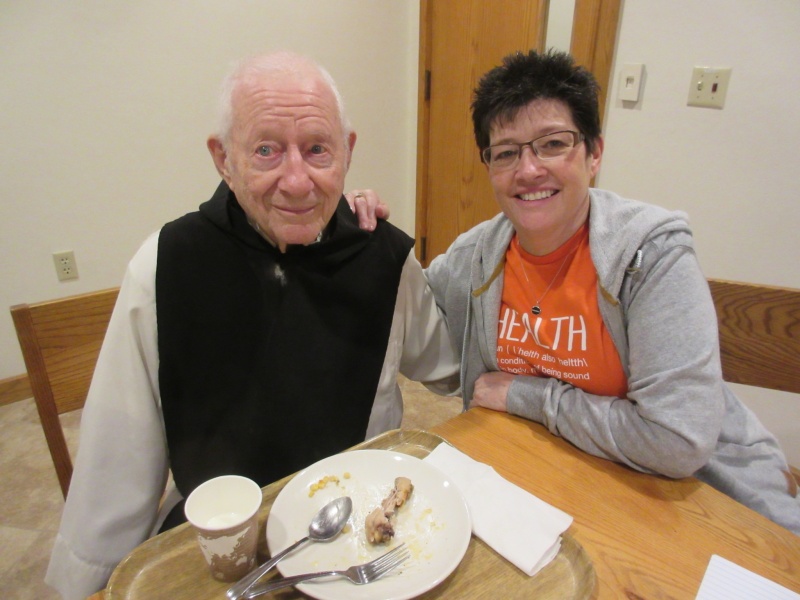 Father O’Connor with Carla Offenburger after our lunch in the Guest House dining room at the abbey. 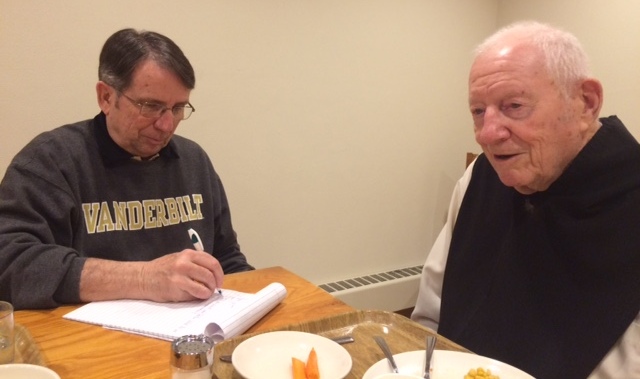 Carrying on a “conversation” with Father O’Connor, whose hearing is bad, by writing him questions or comments on a note pad. 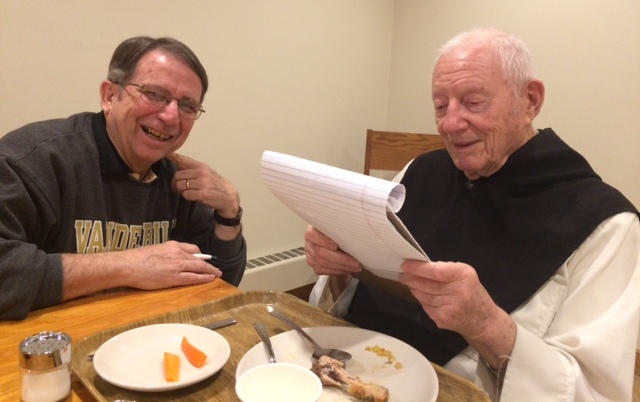 When we told Father O’Connor that our great-nephew Tony Watson is now a pitcher with the Pittsburgh Pirates, the old priest, who is a great baseball fan, quipped, “That’s more important than being Pope!“