OXFORD, Ohio, July 17, 2017 — Connections with our grandkids are made different ways, aren’t they?

Lindsay Offenburger, 10, and I share a love for reading and our connection appears to be books. I’ve been filling her book shelves since before she could read, and she has a great collection in her room. Late last fall, I gave her my full set of “Harry Potter” books which she has really enjoyed. We often read out loud to each other.  She has seen all the movies, so her images are much more vivid than mine. We’ll spend the rest of our lives discussing books.

With the free-spirited Casey Offenburger, 6, the connection occurred this past May with “Master Chef Junior.” We’ll spend the rest of our lives cooking together.

When we visited in late May, Casey started campaigning the minute we walked in the door. She wanted all of us to watch their recording of a television show titled “Master Chef Junior.”  Of course, I had no clue what she was talking about.  But when your granddaughters ask, you listen.

So, that Friday night found the whole darned family in front of the television watching the year’s final episode of “Master Chef Junior,” in which four young chefs, ages 10-12, were competing in preparing genuinely gourmet meals.  Casey explained how they started the year with many more young chefs on the show, and a series of competitions eliminated a few every week.  The final four — two girls and two boys — made most of us look like poor excuses for cooks. But I digress.

It was obvious Casey was hooked.  But it wasn’t until Saturday morning when the two of us were re-hashing the show while laying in bed that I suggested we could do our own “Master Chef Junior” for dinner that night.

A young, enthusiastic Master Chef Junior transfigured right in front of me.

Casey jumped on the idea! 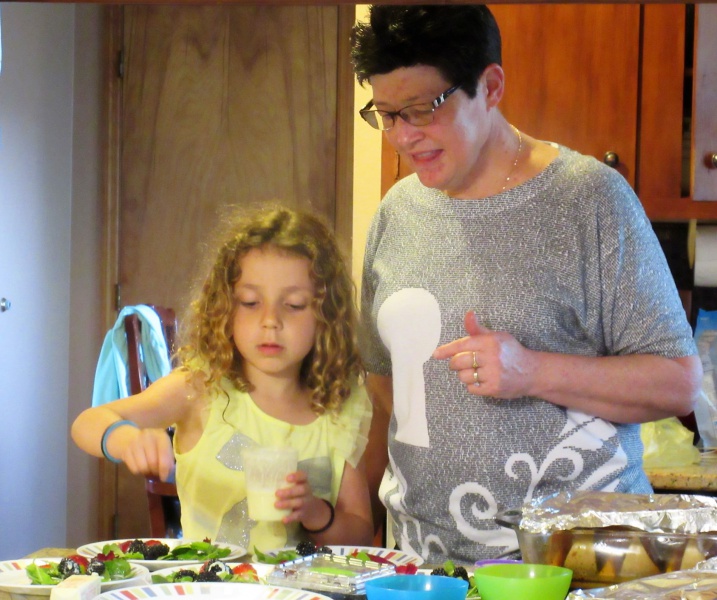 Casey and Carla preparing salads for the May gourmet dinner. 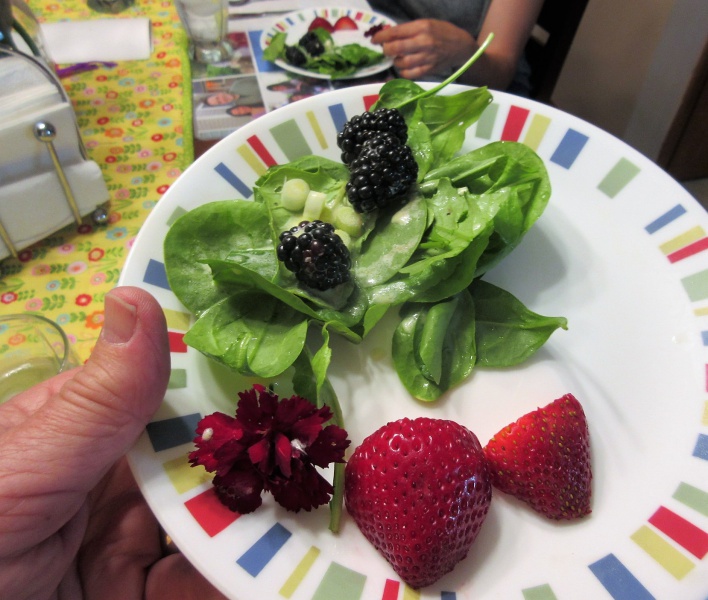 That fancy salad, which even had a blossom from the flower garden to eat!

What about before-dinner appetizers?  “No, Grandma, we don’t need any, we don’t want to have our guests too full.”  O.K., Casey.

After we researched a few recipes on the internet, we inventoried mother Maria Offenburger’s kitchen for food supplies, made our grocery list, and headed to Kroger, a sprawling food store in this southwestern Ohio college town of 21,800.  Shopping for ingredients is part of what the contestants on “Master Chef Junior” have to do, so Casey was well aware of how our shopping had to be done.  What a hoot it was!

I didn’t know what she was going for here, but she swore she knew exactly where they were. With her mother’s Argentine heritage, I was afraid this was something we’d have to seek help on preparing.  The beans I’ve prepared require soaking or a full day in the crock pot.  Sure enough, Casey knew exactly what she was looking for — running to the right aisle, stooping clear down to the bottom shelf, and then actually laying down across the floor, somewhat blocking other shoppers. Then she read loudly and clearly from the can labels the different types of Bush’s Best Baked Beans — “Original,” “with brown sugar,” “with honey,” “with onion,” and “Country-Style.”  I wish I would have snapped a picture!  This little Master Chef Junior sure was excited about serving “brown beans” and she was taking the choices very seriously.

“My dad loves these,” she said.

So by gosh, we served them. 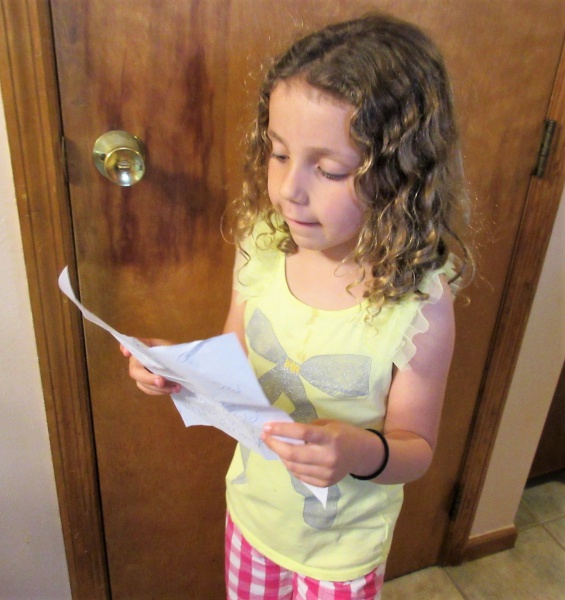 “Master Chef Junior” Casey reads the menu to the guests. 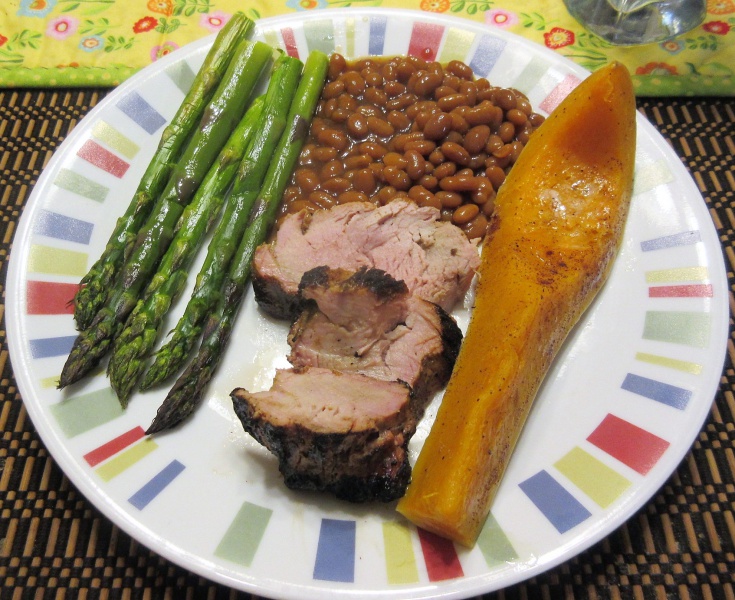 The May gourmet dinner, well-planned, well-prepared, well-presented — and note the “brown beans.”

Casey could also be considered an impatient chef because she was ready to get started long before it was time to start preparing dinner. So we planned and schemed for most of the afternoon: What our order of preparation was going to be; how the food was going to be placed on the plate, and more.  We had a script to write so she could explain every course as it was served, just like on the TV show.  All the while, we kept everything a secret from the rest of the household. That was somewhat easier than it would’ve normally been, because big sister Lindsay was at a sleepover.

Our time in the kitchen was priceless.  It was also very much a 50-50 mission.  Casey indeed became a “Master Chef Junior,” and she was literally gleeful the entire time.  She made the homemade vinaigrette (we loved saying that word), she sliced & diced, she did a bit of everything.

Basically, no one was allowed in the kitchen — except Grandpa to take photos, but “don’t look, Grandpa, just take the picture.”

When it was time to serve dinner, she gave clear instructions on how the meal would work.  Grandma became the back-kitchen prep worker, and Casey was out-front in her glory.

Her guests only had good things to say about her meal. And she was beaming. 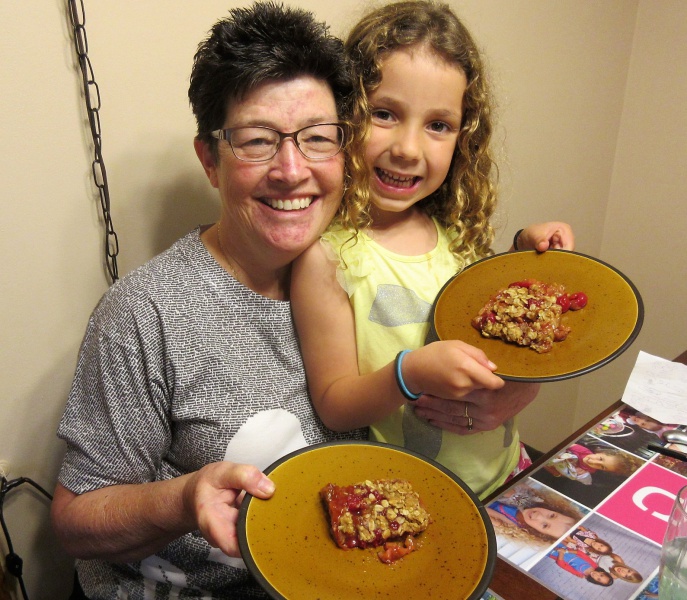 Carla and Casey with the cherry-rhubarb crisp.

Before dessert was over, she was scheming about our next meal.

That next meal didn’t come until our visit in June.  And wow, was she ready!

We had pen and paper out almost immediately. I planned ahead and brought some magazines with recipes I thought she’d enjoy making, and we got started right away.  We included Lindsay this go ’round and she was a big help.

Our menu would consist of grilled flat iron steak, slaw salad with cucumbers & tomatoes, mashed carrots with sour cream, and fresh sautéed green beans.  We would also make a special strawberry lemonade and an appetizer — fruit & cheese plate that included oranges, slices of mango, bananas, and brie & gouda cheeses. Dessert would be a wonderful, finger-sized raspberry tart with lime — several tarts for each dinner guest. 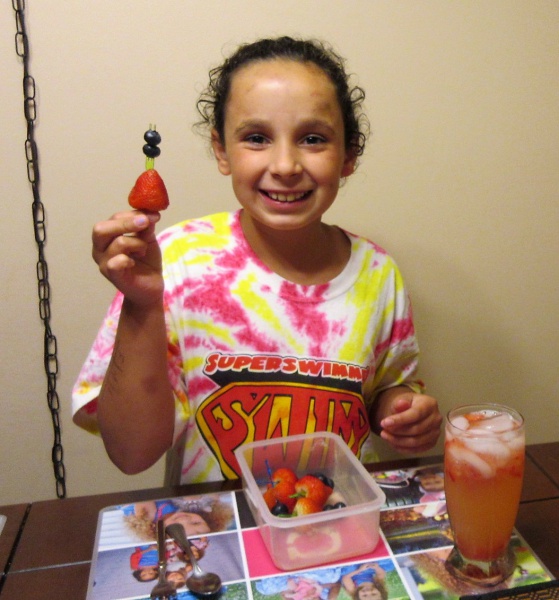 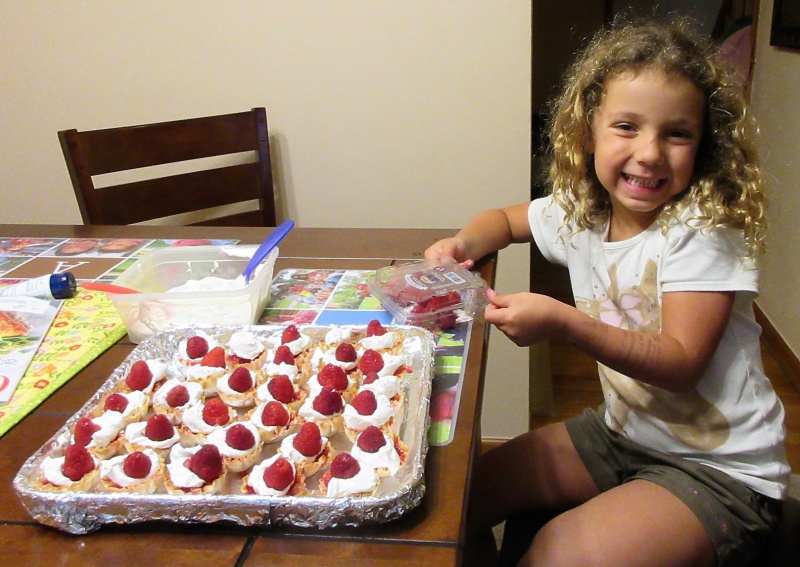 Casey was happy with the raspberry tarts she helped make “for dessert. 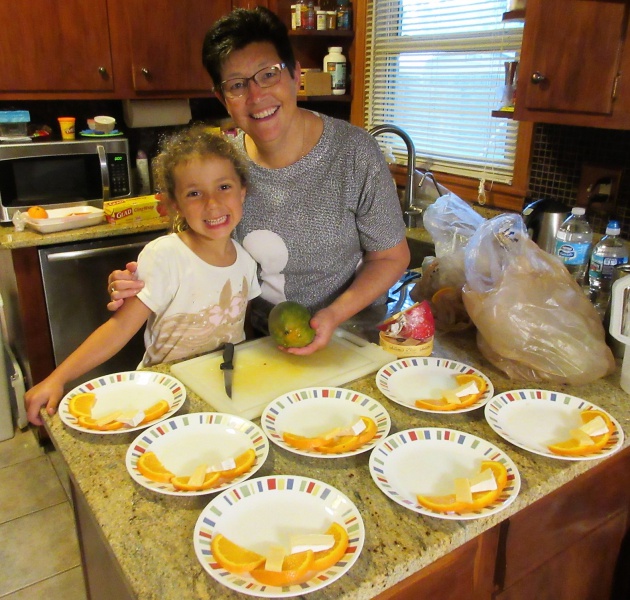 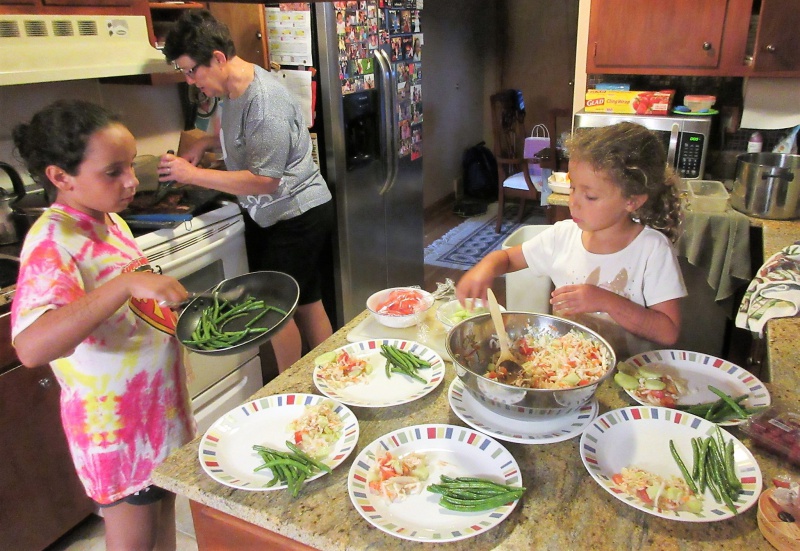 It got a little crazy in the kitchen at serving time!

After Casey, Lindsay and I created yet another grocery list and checked Maria’s pantry, the three of us headed to Kroger.

There was a good lesson in our shopping — just how much of what you eat should be purchased in the produce section.  Most of what we bought came from there: Fresh, real foods.

And we had a game of guessing how much our total bill would be.  Grandma won — the bill was about $135.  That did include a bag of Skittles for 2-year-old Audrey, who would be watching us while we were cooking.

We had just as much fun in the kitchen this time.  The dynamics were slightly different with three of us, but more hands made less work and more laughs. 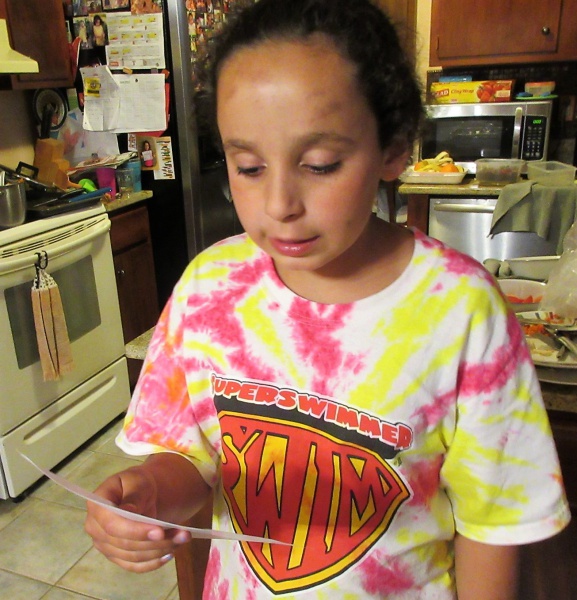 “Master Chef Junior” Lindsay shares the menu with the guests. 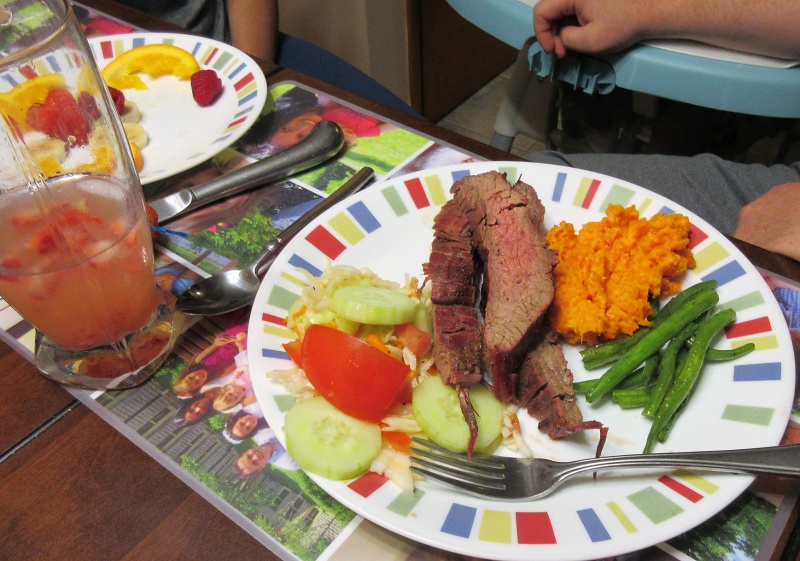 And here’s that June dinner.

Again, after this successful meal, Casey was already planning our next “Master Chef Junior” experience. And we started a list of ideas.  That next meal will take place at Simple Serenity Farm when the Oxford Offenburgers visit us in August.  Grandma will be getting out the good dishes, and the stack of cooking magazines will come off the shelves.

Reading with Lindsay. Cooking with Casey.  What will little Audrey want to do?

I can’t wait to find out.  I love my time with these girls. 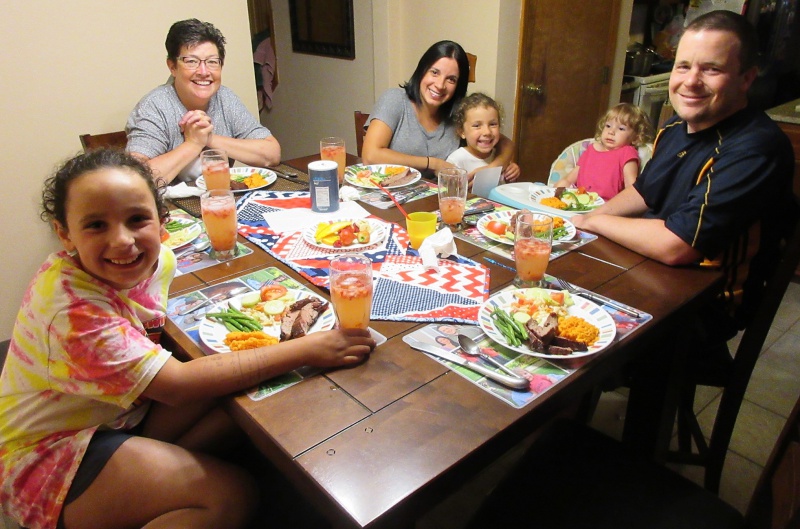 Happy guests around the dinner table.

You can write the columnist by email at carla@Offenburger.com, or comment by using the handy form below here.