JEFFERSON, Iowa, Oct. 16, 2017 — The “Courthouse 100” committee, which for nearly two years has been planning events celebrating the centennial of the Greene County Courthouse, has had some fun surprises while sifting through the history of the inspiring building in Jefferson.

That history, and the continuing operations of county government in the courthouse now, will be saluted on Friday, Oct. 27, with a full day of activities, including tours, displays, refreshments and a 2 p.m. program with speakers and music. That will be 100 years to the day after the dedication ceremony for the courthouse in 1917 when it was brand new.

A highlight of that history – or some may consider it a lowlight – is that at least four times during major county festivals, chickens were thrown from the courthouse roof, or in one case a balcony, to big clamoring crowds on the lawn and sidewalks. 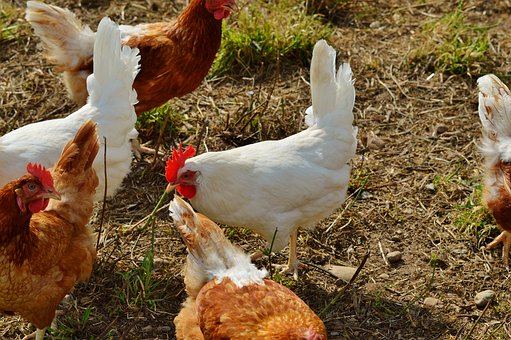 That happened during “Watermelon Day” celebrations in the late summers of 1932 and 1933, sponsored by the Jefferson Junior Chamber of Commerce, which no longer exists. The idea was to brighten the spirits of people in that grim economic times of the Great Depression, by having a one-day festival with free food and entertainment. That included free watermelon on the square and live chickens to catch and butcher for later consumption at home. There were also ball games, wrestling matches, bicycle races and “aerobatics” by daring airplane pilots.

Stories in the Jefferson Bee and Jefferson Herald newspapers back then say that two dozen chickens were thrown off the roof during the ’32 celebration.

The celebration grew for ’33, with “20 ton of luscious melon served free,” the Herald promised. And “20 dozen” chickens were thrown from the courthouse roof in two stages. The Bee reported that an initial and limited “fowl throw” was scheduled for 12:30 p.m., with an “enormous fowl throw” at 5:30 p.m. – with a total of 240 chickens being launched. More than 5,000 people were expected, perhaps as many as 10,000.

How the promoters got the chickens to the courthouse roof is never explained. 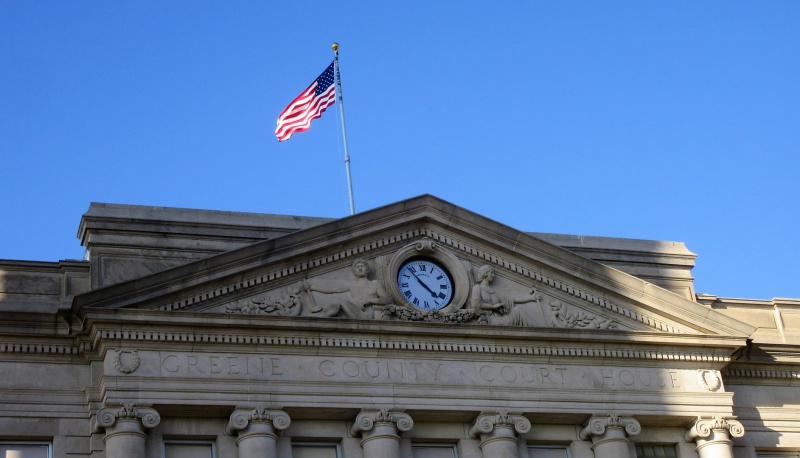 We know how the chickens came down from up there, but how were they taken up?

The chicken-throwing didn’t end in the 1930s.

The Bee reported that a “county-wide poultry festival” was held on the courthouse lawn on Aug. 4, 1948, to salute local poultry producers. With breed contests, there was a chance for spectators “to see the quality poultry of the county” and “a chance to catch a rooster or two for themselves. The roosters will be tossed off the courthouse roof at 15-minute intervals during the afternoon.” The festival was sponsored by the Jefferson Chamber of Commerce “to focus attention on the poultry industry, which provides $2 million a year in cash income” in the county, “and to help build the industry still further.”

Then on April 10 and 11, 1958, the community hosted a “Jefferson Industry Days and Trade Show.” Iowa Gov. Herschel Loveless delivered a speech at the event. There were open houses at all the local industries. In one spectacular moment, “1,000 balloons – some containing prize certificates” were released “from the top of the courthouse,” the Bee reported. The schedule said “balloons and chickens will be dropped at 1 p.m. and 4 p.m. both days.”

And as long as we’re introducing some quirky courthouse history here, let’s not forget the Aug. 14, 1935, appearance here of “The Human Fly” D.D. Roland, an acclaimed stuntman in movies of that era. The Junior Chamber hired him for a new celebration they were hosting, “Free-for-All Day,” which apparently replaced their earlier “Watermelon Day” festivals.

Roland is said to have climbed the exterior walls of the courthouse without benefit of a rope or other support. Another of his advertised stunts – we couldn’t confirm whether he did it here – was taking a wooden kitchen chair, balancing it on its back legs on the concrete rim on top of a building’s walls, and sitting on it while dangling his legs over the edge. 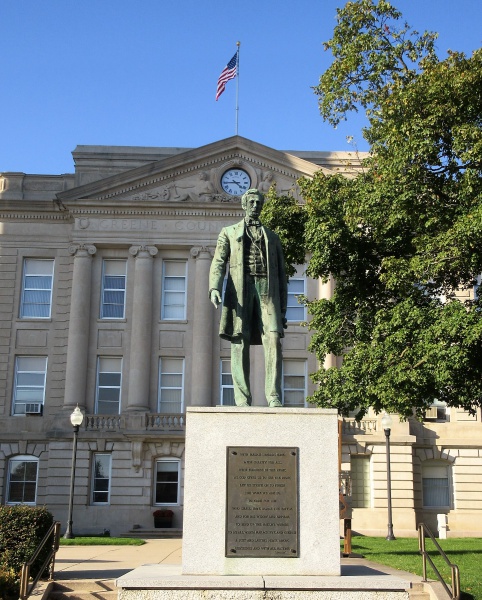 There is no report on whether any chickens landed on the Lincoln statue.

Don Van Gilder, the assistant county engineer who is chairperson of the Courthouse 100 committee, shook his head in amazement at the old newspaper stories, not only of the chicken throwing, but also of the variety of events at the early festivals.

“Wow!” Van Gilder said. “There were some bizarre things going on back then. Twenty tons of melons, 5,000 people, air shows, wrestling matches, baseball games, ‘The Human Fly’ and other performing acts. People surely didn’t have ‘at home’ entertainment at that time! What an undertaking to organize all of that without the technology we have today.”

There’ll be no re-enactment of the chicken throwing at the courthouse centennial next month.

“I’m not sure I could endorse a chicken throw today,” Van Gilder said, “let alone risking any animal protective organization’s involvement, and for good reason. I’m not sure even a rubber chicken throw would ‘fly,’ given the implication.”

Greene County history books that I’ve seen in recent years do not mention the chicken throws of the 1930s and later. 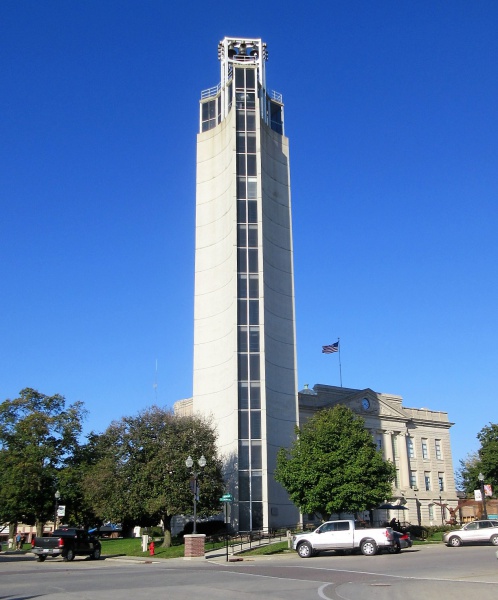 As far as we know, no chickens have ever been thrown off the Mahanay Memorial Carillon Tower, which was built in 1966 on the southwest corner of the courthouse square.

The tip about them came five years ago when I did a series of videotaped interviews for the Greene County Historical Society of James H. Andrew, then 91, a retired Greene County farmer, businessman and such an authority on local history that the Greene County Board of Supervisors proclaimed him to be “Mr. History” for the county. Andrew died at 93 in 2014.

In the interviews, he recalled hearing that things were so tough in the Great Depression, and people were in such dire need of more food, that Jefferson business people put on the free watermelon feeds and indeed threw chickens off the courthouse roof. Andrew said he was a boy at the time and that he had no memory of actually seeing chickens being thrown, but he was always curious about it after hearing older people talk about it. He said he had never come up with any historical documentation or photos of it.

I subsequently did some checking in the Bee and Herald archives on the website of the Jefferson Public Library but found nothing.

When the Courthouse 100 committee formed in 2015, I mentioned the chicken throwing to the rest of the group and suggested we do additional research on it. 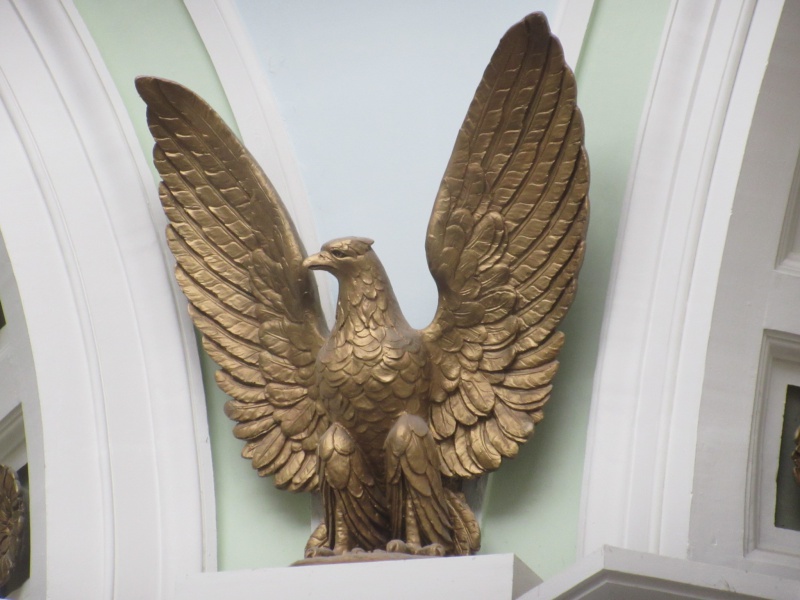 The only thing close to a chicken around the Greene County Courthouse today are four eagles, like this one, perched high up inside the gorgeous rotunda.

A year ago, I asked Stephen Molle, of rural Cooper, then 90, if he had any knowledge of it. “Yes, I think it did happen,” Molle said. “I was not there to see it for myself, but my dad was and he told me about it. He said it got pretty wild with fights when people were going after the chickens. It was not the kind of thing he would’ve made up.”

The break-through came two weeks ago when, during a Courthouse 100 meeting, we decided if we were going to try to confirm the chicken throwing stories, we needed to do so soon to have the information available before the Oct. 27 celebration.

We asked Mikki Schwarzkopf and Dianne Piepel, both of Jefferson, two of the most persistent and successful researchers for the historical society, to see what they could find. Within two days, Schwarzkopf found 11 different stories and ads in the library’s online archive of the Bee and Herald. And Piepel found the stories and ads about “The Human Fly” performing on the courthouse in 1935. 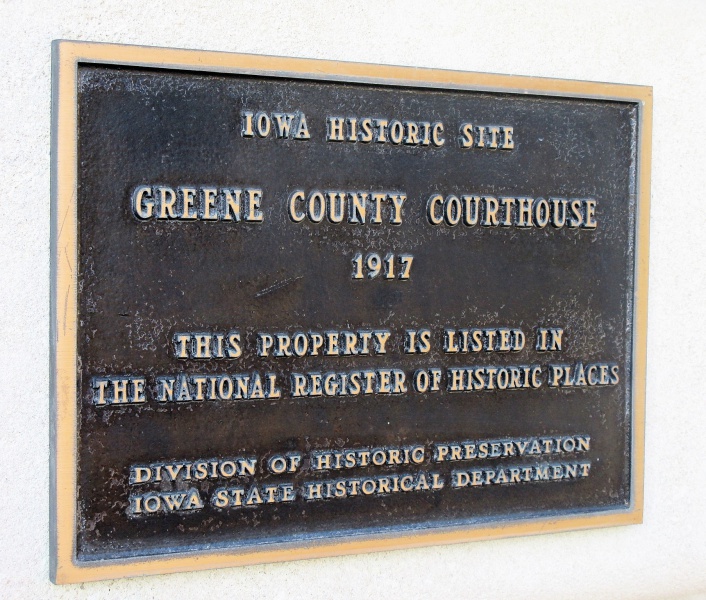 We’ve read the nomination papers proposing that the Greene County Courthouse be placed on the National Register of Historic Places, and as you can see, it has been honored that way. But the papers never mentioned chicken throwing from the roof.

Once we knew these past promotions actually happened, we started asking other older citizens if they recalled any of them.

“I saw the chickens being thrown off the courthouse,” said Bob Owens, 90, of Jefferson, although he wasn’t sure what year it was. “I was pretty young then, but I definitely remember it. I was standing on the corner about where the bell tower is today, and I saw those chickens coming down. They’d spread their wings and glide south down Wilson Avenue with people running after them.”

Bob Rhoades, also 90 and living in Jefferson, remembers the same scene. He said he thinks his family might have wound up with a couple of the chickens.

Both said the chickens probably gave families the first meat they’d had in a long time.

“In the worst of the Depression, people just didn’t have much at all – food or money or anything else,” Owens said. “People today think it’s hard getting by, but it’s nothing compared to how hard it was in the 1930s.”

Van Gilder said “in those tough economic times, chickens were cheap and an easy meal. You could catch one, pluck it, dress it and have it on the table in pretty short order. The chicken was a staple food and so an indicator of the economy.

“I know that chickens can fly short distances, as in over a fence, and they can glide with their wings outspread,” he continued. ‘So I can imagine the organizers of the event figured the chickens would glide safely to the ground, then run around on the ground before being caught, thus creating a spectacular eye-catching event.”

Just don’t expect to see it again at the courthouse centennial.

“Built by the people of the county, dedicated to justice and good government.”  And also ideal for occasional chicken throwing from right up here.