FAIRFIELD, Iowa, Nov. 6, 2017 – I’m more optimistic about finding solutions to Iowa’s clean water problems – especially in rural Iowa – than I’ve been in a long time. Why? The right person is getting involved.

I’m talking about Ed Malloy, for 16 years the mayor of Fairfield, the always-interesting southeast Iowa town of 9,460 and notably the home of the Maharishi University of Management (MUM), which I have long called “Good Ol’ Unusual U.”

Malloy, now 64, was in the first wave of young practitioners of transcendental meditation who moved to Fairfield in the late 1970s after TM’s guru Maharishi Mahesh Yogi opened a new university on the campus that had been vacated when Parsons College went bankrupt. Malloy has been a meditator for 43 years now, and he’s always seemed to have himself so together that he’s a veritable poster boy for the physical, mental and spiritual benefits of the regular practice of TM.

He is widely recognized as one of the brightest, fairest and most successful leaders in our state. He probably should have been governor, except that for years he wouldn’t commit to being either a Democrat or a Republican, meandering instead with the Natural Law Party.

He’s a Democrat today and, yes, an environmentalist. He’s also the longtime CEO of Danaher Oil Company, a respected oil brokerage based in Fairfield that serves the refined fuel markets across the central U.S. Malloy is the only tree-hugging oil company executive I’ve ever known. 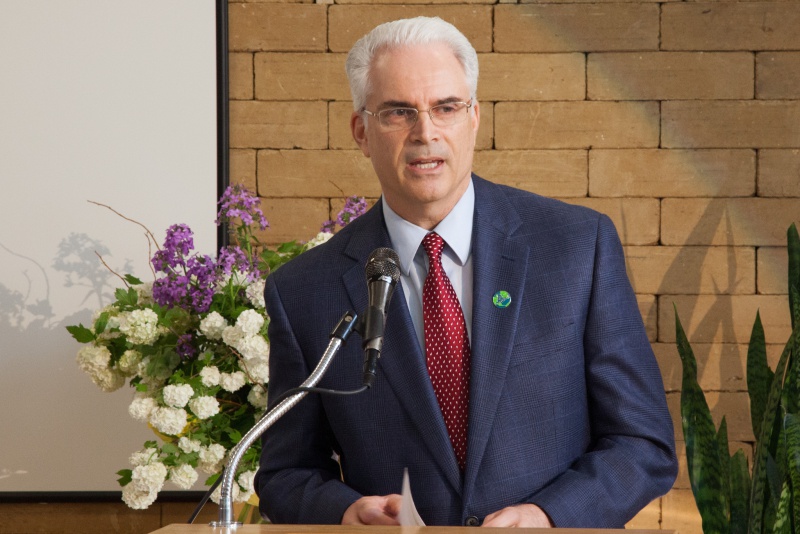 Ed Malloy, mayor of Fairfield, is taking new leadership on the issue of cleaning up Iowa’s water, saying if we want to attract more people to live and work in Iowa, the environment will “have to be clean.” He is hosting a conference this Thursday, Nov. 9, in Fairfield that he hopes will start a new statewide conversation about this. He is shown here speaking on sustainability in 2014 at Maharishi University of Management in Fairfield.

He has become very concerned about our water pollution in Iowa – from all kinds of pollutants in both rural and urban areas. He wants to do something about it before it destroys our economic development and growth potential here.

“As I’ve listened to the public debate and the Iowa legislature’s proposals in this last session for funding water clean-up in the state, I didn’t hear answers that I thought would work,” Malloy told me.

“So I decided to launch a statewide conversation about this. We’re starting off with a one-day conference here in Fairfield, bringing together a group of people with diverse interests to talk about the problems, identify some solutions and begin to figure out how we can pay for them. We all know that we’ve got 765 impaired waterways in this state. We simply have to act and try to put enough money toward making improvements. It’s something we should all be engaged in, one way or another.”

That conference, using the theme “Clean Water – Livable Communities,” is set for this Thursday, Nov. 9, at the Fairfield Arts and Convention Center in this southeast Iowa town of 9,460.

Registration is $35 (or $20 for students) and includes lunch. You can register online right here: http://www.fairfieldacc.com/.

I look at this as sort of a change-of-venue on a very contentious issue. Most of the debate and discussion has been about the Raccoon River watershed between Storm Lake in northwest Iowa and the Des Moines Water Works in the capital city.

Of course, the problem is statewide, actually well beyond that. But it’s really interesting how we’re going to manage this problem in Iowa because we’ve got to do so without disabling our production agriculture industry that is feeding the world.

So why not start in Fairfield, which has won national accolades as a community of entrepreneurs, innovators and visionary thinkers. They’ve made diversity work, and for the most part work harmoniously with traditional agriculture and manufacturing. And they’ve all reinvented Fairfield as one of the most livable communities in the Midwest.

Ed Malloy and I have been friends for more than 25 years. We served together with 35 other people from across the state on former Gov. Tom Vilsack’s “Strategic Planning Council” from 1999-2001. We traveled and studied the state then, answering our charge to come up with “a vision for what Iowa should be like by the year 2010, and an action plan on how to get there.”

That effort was generally successful, leading the way for establishment of the transformative Vision Iowa Program; advocating for the development of the bio-fuels and advanced manufacturing industries; arguing for embracing immigration and diversity to grow our population, and urging smart new streamlining of government in Iowa.

“You probably remember that when we were working on the Iowa 2010 plan, we were given an op-ed essay by a ‘futurist’ at the turn of the last century,” Malloy recalled. “He was saying that the Midwest could capitalize on people leaving the overcrowded cities for small cities in Midwestern states like Iowa, but the environment would have to be clean.

“I think we are at that turning point.”

So, as he has planned Thursday’s conference – and the start of a new statewide conversation – about water quality, “we are going to frame the issue around the importance of clean water and clean environment to high quality-of-life improvements, and the opportunity to grow our economies in the future.”

Malloy said “we have an opportunity in front of us to turn around the decades of water and soil degradation that limits our growth and compromises our health. We need to envision a future with clear water everywhere that inspires a renaissance of livable communities and economic prosperity.”

The keynote speaker for the conference is John Ikerd, whom I have not heard before, but he has intriguing credentials. He is a retired professor of agriculture economics at the University of Missouri who earlier taught ag at North Carolina State, Oklahoma State and the University of Georgia. In the Farm Crisis years of the 1980s, he began to shift his thinking and start advocating for agriculture to become much more sustainable – both economically and environmentally. In 2011, he moved to Fairfield, and he’s become a visiting professor at MUM. Malloy calls Ikerd a “rural economics visionary.”

The rest of the day will be filled with panel discussions led by “a great line-up and many key players,” Malloy says. They include representatives of the Iowa Farm Bureau, Iowa Economic Development Authority, the Association of Business & Industry, the Iowa Environmental Council, the Sierra Club and the Iowa Natural Heritage Foundation.

Topics to be examined by the panels and audience are an “Iowa Water Overview,” “Robust, Well-Managed Soils Create Clean Water,” “Funding Our Clean Water Solutions,” and “Economic Opportunities that Result from Clean Water.”

My own thinking has been evolving toward a huge, federally-funded, environmental clean-up that includes water, soil, air – all of it. I think the problems may be too large and encompassing for individual landowners, municipalities and states to be able to pay for themselves. Malloy says I’m dreaming.

“I don’t think that discussion is being held anywhere yet,” he said. “I’d like to see it first at a state level. If we can be successful doing this in Iowa, we could be a model for many other states.”

He said his personal view is that the participation by farmers “should be voluntary and cooperative,” with a focus on watersheds instead of specifically on counties or cities. “I don’t think another layer of regulation is required,” he added. “I think everybody is on board, knowing that we have to do something – the ag community, the business community, cities. I do think it’s time to get a stronger resolve from the state.”

“I think it will pay economic dividends in the future,” Malloy said. “And people vote on economic benefits.”

Another good reason: “We lost population in 73 of our 99 counties the last five years,” he said. “One way to reverse that is to make our communities more livable. A clean environment is an important part of that.”