COOPER, Iowa, Oct. 7, 2015 — It’s been two weeks since my wife Carla Offenburger underwent major surgery to remove a cancerous tumor that had filled the right lobe of her liver, and today we’re finally getting a report to you readers, using both words and photos here.  I’m pinch-hitting for her, writing this edition of her column “My View from the Front Porch” at her direction.

What you, we and everybody else wants to know, of course, is what’s the prognosis?  Pretty good, we think.

The skilled and esteemed liver surgeon Dr. Qasim Chaudhry gave us good news right after the Sept. 23 surgery at UnityPoint Health’s Iowa Methodist Medical Center in Des Moines.  The huge tumor was contained in the right lobe of Carla’s liver; the margins around it were clear; he and his team saw no evidence of her adenoid cystic carcinoma (ACC) anywhere else; the liver lobe, tumor and gall bladder all came out just as planned, and the 40 percent of her liver that remained seemed to re-boot and start functioning just as we all hoped it would.  She is not cured of cancer, as this ACC she has is thought to be incurable.  Hopefully we’ve got it stopped and cleaned up for now, giving us some time to consider how to monitor and attack it in the future. 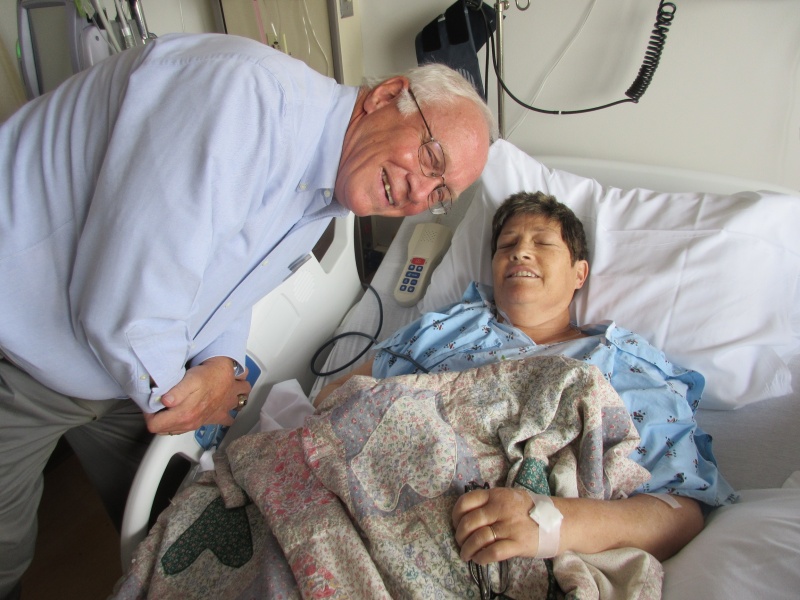 Douglas T. Bates III, our great friend from Centerville, Tenn., flew in Des Moines to be with us during Carla Offenburger’s surgery.

After the planned 24 hours in intensive care to start her recovery, Carla was then moved to the well-respected post-surgical unit on North Sixth Floor at Iowa Methodist, where she received terrific care from a small army of physicians, nurses, technicians, food service, housekeepers and even administrators.  Carla made excellent progress and was released on Tuesday, Sept. 29.

As you can imagine, it felt great to be home.  Our neighbors and pals Karen and Doug Lawton had our place in great shape, and even made sure we arrived home to a hot meal.  That started a steady flow of food, desserts and other support from neighbors, friends, relatives — including the members of the book club that Carla enjoys so much. 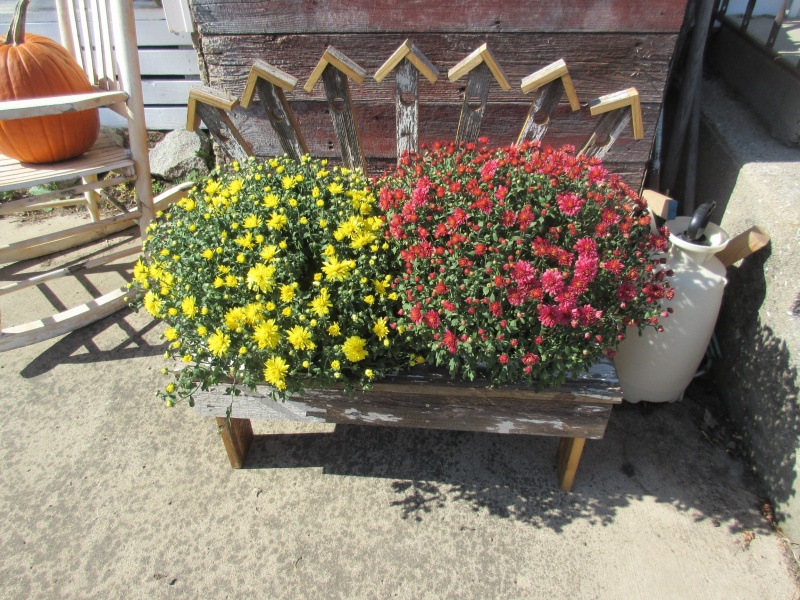 We came home to find our lawn mowed, fall decorations like these mums in place, and a hot meal waiting for us — all thanks to our neighbors and friends, the Lawtons.

Alas, by Friday afternoon, Oct. 2, things had gone awry.  A medication called “Lasix,” a diuretic which should have helped eliminate the normal build-up of body fluids after liver surgeries, may not have been strong enough, and Carla started bloating. With that, mobility became more difficult, breathing became labored and her heart rate escalated. We called our primary healthcare provider Sara Fleecs,  an advanced registered nurse practitioner (ARNP) at the UnityPoint Clinic in Greene County, and she summoned us to the clinic in Jefferson right away. Alarmed at the fluid build-up, she ordered a chest X-ray, which showed fluid in the sacks around both lungs. She was on the phone immediately to the staff of Dr. Chaudhry, the surgeon in Des Moines, and they determined Carla needed to be re-admitted at Iowa Methodist.

We were there by 7 p.m., and over the next 48 hours, progress was minimal to slow.  But finally, after stronger doses of Lasix and other medications, the fluid drainage began.  At midday Monday, Oct. 5, an additional procedure was ordered.  Physician assistant Casey Burch, guided by ultrasound, used a needle with suction to drain more than a liter of fluid from Carla’s right lung.  Four hours later, we were on our way back to the farm, and she was feeling “100 percent better,” in her own words.  She’s gotten progressively better since then. 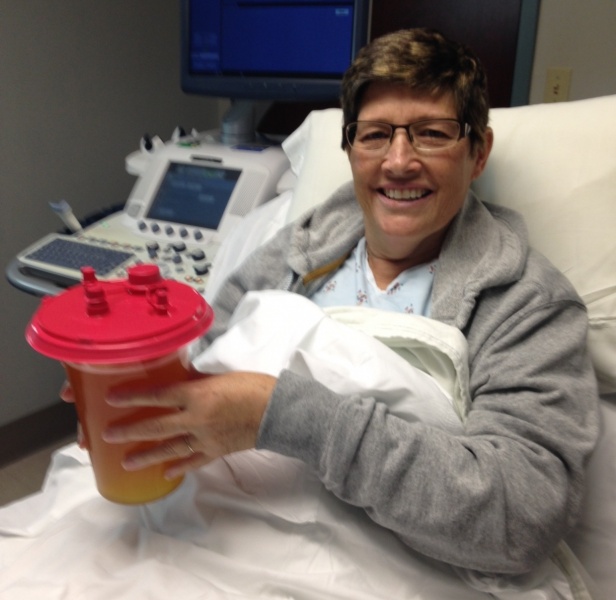 Carla holds the liter of fluid that was drained from the sack around her right lung at midday Monday, Oct. 5, before she was released, again, from Iowa Methodist Medical Center and allowed to return home.

She’s been through a lot in two weeks.  How much?  Let’s look at some of the details and numbers:

–For someone who is basically healthy, other than having cancer, of course, Carla has had two surgeries that sound as grim and scary as they’ve actually been.  Five years ago, when the ACC first appeared, she had a “modified radical neck dissection” to remove a tumor from her lower jaw.  This time, it was a “right lobe trisegmentectomy.”

–The tumor that Dr. Chaudhry removed was “the size of a small football,” he said, weighing six pounds! There was apparently some kidding among his fellow phisicians about whether he should be billing us for a liver surgery or bariatric surgery.

–The 14-inch-long incision arching across her abdomen required 28 staples to secure.

–The fluid build-up that Carla endured started slowly, then rapidly increased.  In fact, she gained 32 pounds from her pre-surgery weight, and that occurred while she was eating very little.  It was all fluid.  It was no wonder mobility, breathing and heart rate became a problem.

–When she was back at Iowa Methodist for the second time, taking a higher dosage of Lasix and other medications, the fluid reduction was rapid.  In 24 hours from Sunday afternoon to Monday afternoon, Oct. 4-5, she lost 16 pounds. “I think I’ll celebrate with a donut!” she said.  In the 12 hours that followed, she dropped another six pounds.  The liter of fluid drained from the sack around her right lung on Monday weighed just more than two pounds.

–The medical care at the UnityPoint Clinic in Greene County, the ER at Greene County Medical Center, and at Iowa Methodist was amazing.   I asked two different people who were on the surgery team to give me a headcount of how many were in the operating room for the five-hour surgery; one said eight, the other said 10.

–The count of physicians who have seen or treated Carla during all this has now topped 12.

–Nurses drew blood from Carla 15 times in the last two weeks for lab analysis, she thinks.

–The diet Carla was advised to follow at home has to be one of the most user-friendly ever from a medical provider. “We want you to eat everything you like,” the doctor ordered. “We want to build calories and protein, so have at it.”  We stopped at the Drake Diner on our way out of Des Moines for chocolate malts.

–We’ve had fantastic prayer support.  We know at least a half-dozen congregations have prayed for Carla and for the medical team working on her.  Her former pastor Rev. Debbie Griffin, who served her at Central Christian Church in Jefferson, visited twice, including being with us at 5 a.m. on the day of the surgery.  One of her current pastors at Plymouth Congregational Church in Des Moines, David Telford, stopped by three times. And we were anointed by Father Jim O’Connor, the 91-year-old monk at New Melleray Abbey near Dubuque, who has been a special spiritual mentor for us.

We could not be doing this alone.  And, be assured, we are both committed to paying all this forward, for the rest of our lives. 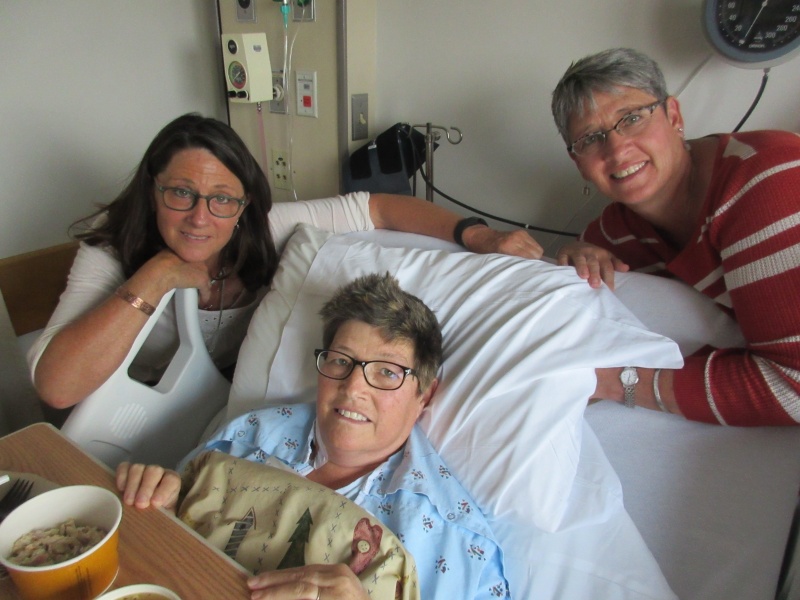 The Burt sisters, together in Carla’s hospital room, have been a strong part of our support system.  That’s Tammie Amsbaugh at the left and Chris Woods at the right, both from Des Moines. 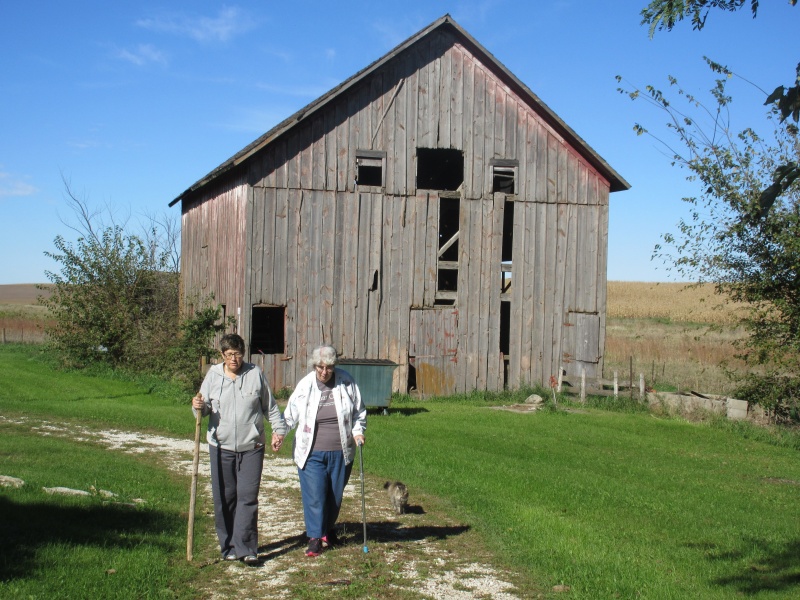 Carla and her mother Sue Burt, of Des Moines, who has been staying with us and helping at our Greene County farm, our shown taking another one of their regular walks around our loop driveway.  The dilapidated structure in the background is the Kyle Munson Barn, which we gave to our friend who is the Iowa columnist for the Des Moines Register, who has done nothing about it. 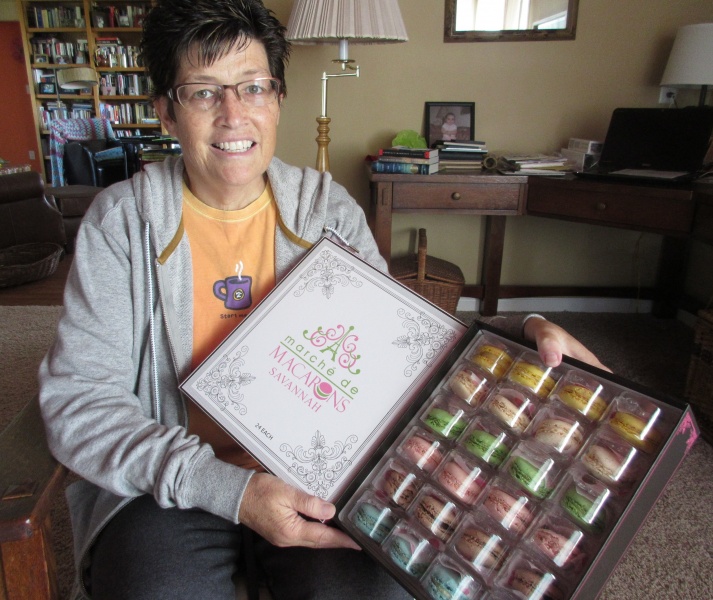 Carla shows a box of the famous Savannah, Ga., macarons that were sent to her on Wednesday, Oct. 7, by her niece Carrie Shippy, who lives in that southern city. 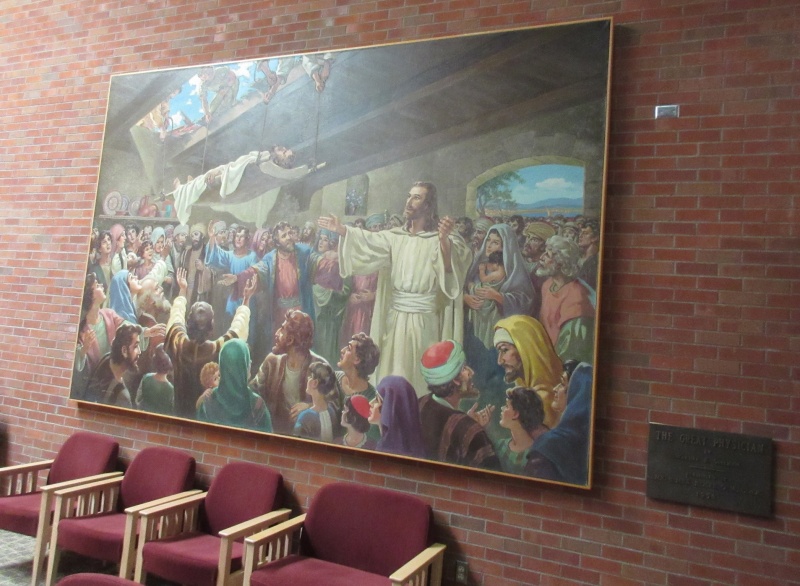 We’ve spent some time in Jeanne Hoff Goodwin Chapel at Iowa Methodist Medical Center.  And it just makes us feel better looking at the large painting “The Great Physician” on display there.