NASHVILLE, Tenn., July 27, 2014 — It’s doubtful anyone in the office here will ask me much about my summer vacation. They’ll wonder where I’ve been and when I say “Iowa,” the polite ones will say “oh” and the wise guys will crack a joke.

You had to be there and, more accurately, be from there, to know what an invigorating week it actually was but allow me to touch upon a few of the highlights during my stay in Parkersburg and Ames.

My wife Phyllis and I paid a visit to Art and Betty, longtime friends of my parents, Herb and Betty Williamson. Art is about 90 and the last living male member of the pinochle club that used to be a monthly priority for seven other Parkersburg couples from the 1950s to sometime in the 1980s. My parents loved it. The card games rotated from home to home, and my brother Randy and I knew we were hosting when we discovered the chocolate cake and were warned not to touch as it was designated for pinochle that night, not us.

Art is a mild-mannered guy who operated Art’s Barber Shop on Main Street for 40 years. He needed a ride to the Veterans Administration Clinic in Waterloo since he’s been legally blind for 25 years, so I volunteered.  As we drove U.S. Highway 20, I asked Art about his military service.

“Army,” he replied and after a deliberative pause, continued, “I was part of the Normandy Invasion; I was at Omaha Beach.” I was dumbstruck but then in the spirit of the Greatest Generation, he quickly added, “but I didn’t do anything.”

Were you on the boats that came across the channel?  “Yes.”

“Don’t try to tell me that you didn’t do anything,” I shot back.  We talked about his World War II days and he finally admitted he had five battle stars (but of course he continued to claim he didn’t do anything!).

His modest-to-a-fault comments are typical of WWII vets in general and Iowans in particular. It was a drive I’ll never forget. 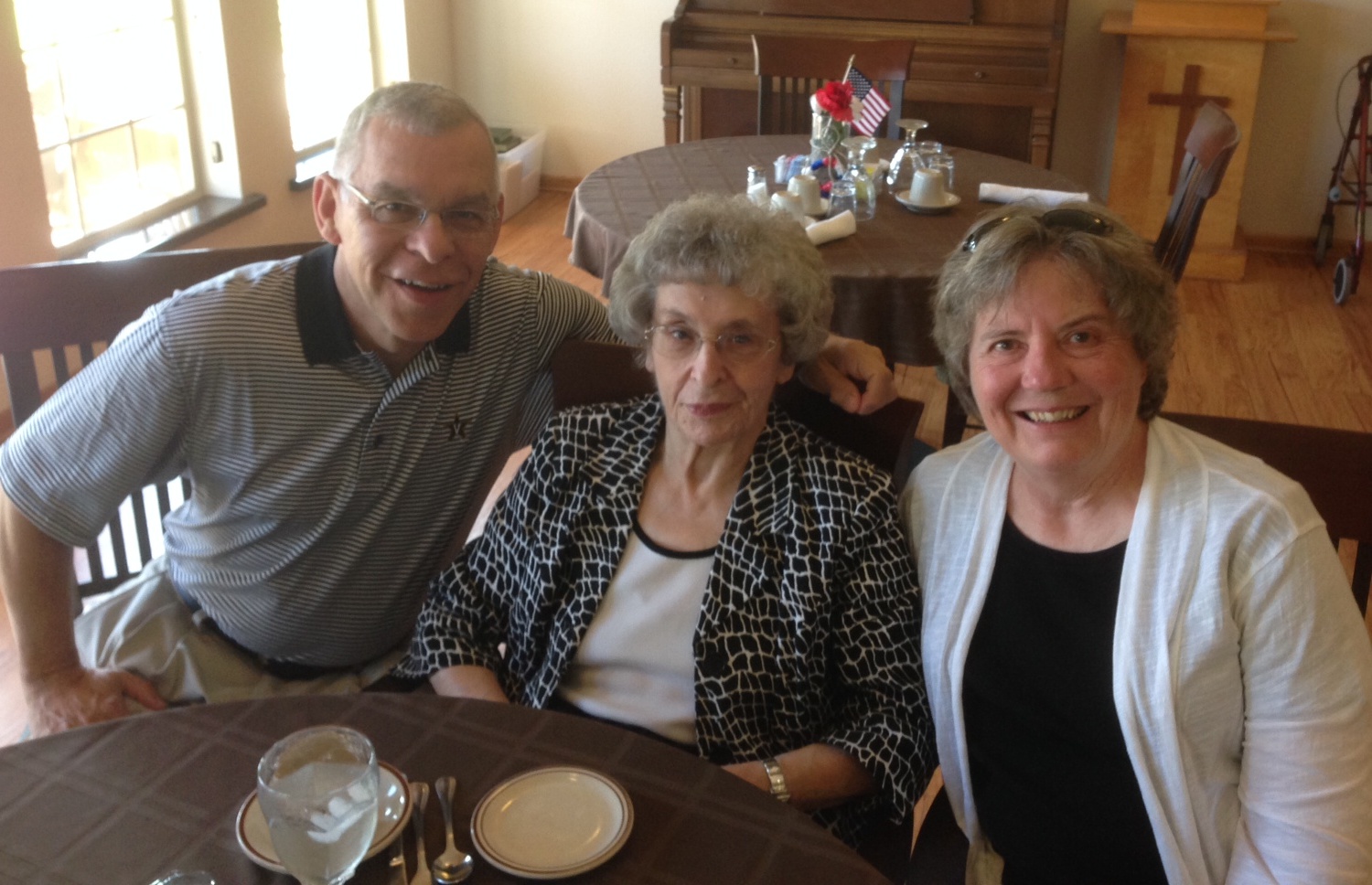 Betty Williamson (center), of Parkersburg in north central Iowa, is flanked here by her son Rod Williamson and her daughter-in-law Phyllis Williamson.  Rod and Phyllis were visiting from Nashville, Tenn.

Phyl and I also stopped by Merle’s farm about five miles northwest of Parkersburg. Merle is a remarkable, older 4-H buddy of mine. We loved getting the jumbo 25-cent chocolate malts at the Creamery nearly 50 years ago. An expert with show cattle, he helped me groom my steer the only year I had the county fair grand champion, even though I had disappointed him months earlier when I bought my calf from a Nebraska rancher rather than his local herd. I never forgot how he didn’t hold a grudge.  Without him, my steer wouldn’t have won.

I always find Merle’s attitude inspiring. He learned a new career late in life after his long-time employer closed its doors. Ask him about how he likes his work today, being on the north side of age 70, and he always gives a convincing, “Good!”

The Williamson clan took time out of its hectic schedule to have dinner with us three nights, once in brother Randy’s basement (the only space large enough to everyone to gather), once at Matt’s Bar and Grill across from the Kwik Star, and the last night at my nephew Travis’ house where we ate pizza and speculated on the pros and cons of Travis’ brand new job promotion opportunity.

We caught up on family news, avoided politics as we don’t share similar views, and mostly talked about Mom, who has dementia. She attended all these get-togethers and sat attentively without the ability to join in. She stays at the local assisted living center.

It’s hard to look at the diminished person you remember as one of the smartest and most organized people you ever knew and realize you can’t carry on a conversation beyond a sentence.  In her prime, mom was something.

She grew up in urban Pennsylvania, met my dad working at the Pentagon near the end of WWII, got married there and came to Iowa not knowing a soul aside from her new husband. And she claimed she was not brave!

She taught me how to catch a ball and tie my shoes.  She once grounded me for being rude to her elderly boss, even though as the starting junior high quarterback I’d miss a key game. (I never forgot that lesson!)  She was always upbeat, despite her origin and despite living in a drafty Midwest farmhouse accompanied by the constant aroma of various feedlots.

I entered the “After-Dinner Speaking” contest in high school and had to talk on the topic of current women’s fashions, as I recall. The accent was on the speaking – not the writing – so Mom cranked out the content in an evening or two, handing it to me with her typical, “I’m not sure if this is any good.”

Good?  It was tremendous, and I earned one of the few Division I ratings at the State Speech Contest.  Some praised my “speech,” but the reality was I was given the keys to a Ferrari and I simply had to drive it.

It was tough leaving Mom on our last morning there. We knew she couldn’t remember that we’d been there for nearly four days and when we showed up at breakfast and announced we’d be leaving soon, she looked so dejected. I felt awful.

“You just got here,” she lamented, unable to remember prior visits.

When we finally mustered the emotional strength to head to the car, Mom followed us out the center’s front door (a no-no there) and stood in the parking lot, all 5 ft. 3 in., 100 pounds, forlornly watching ’til our car was out of sight. What Mom didn’t know is that we drove around the block to be sure that she had made her way back inside safely.  I choked up and couldn’t talk for a few minutes. 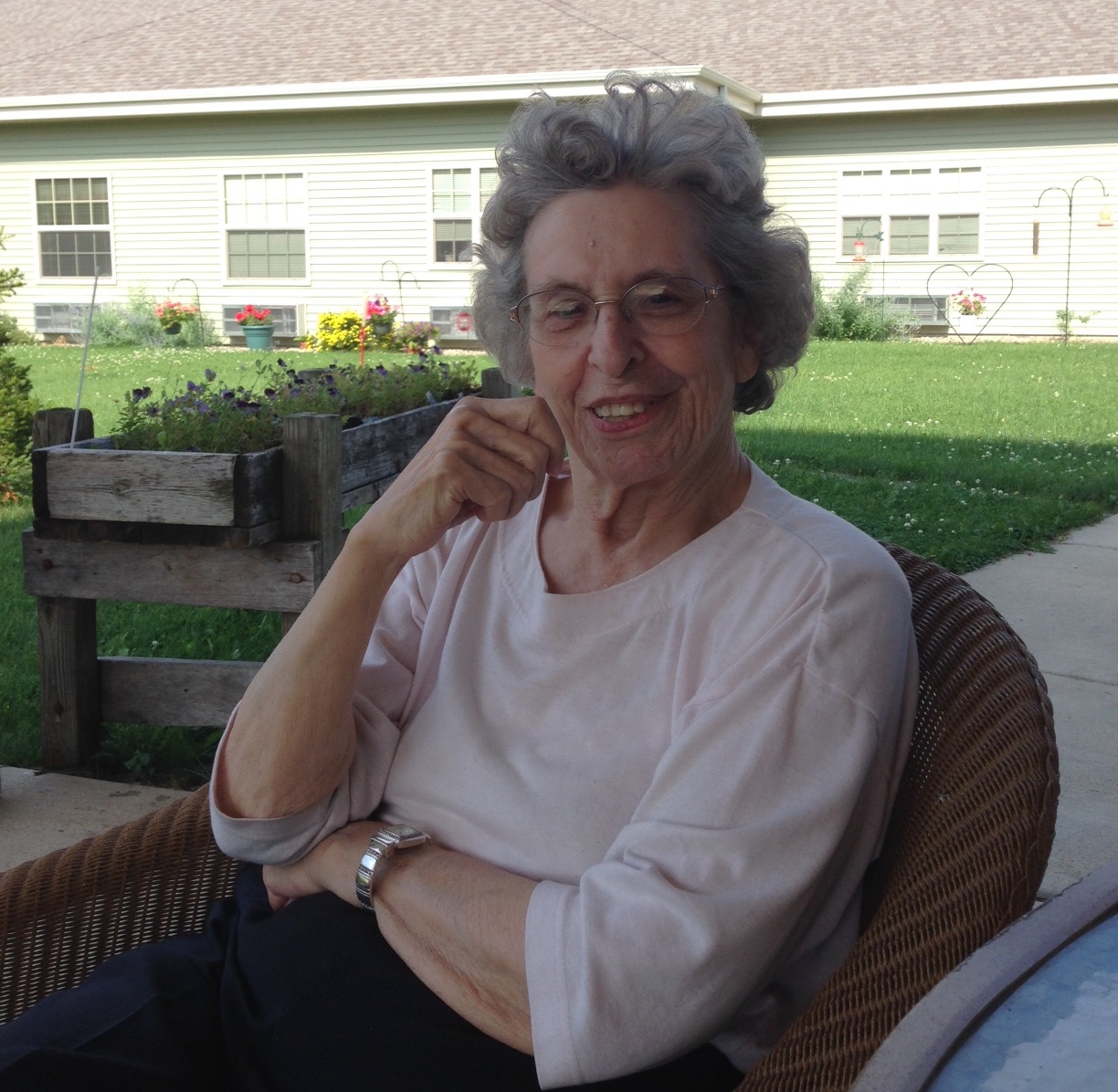 Betty Williamson, during her son Rod Williamson’s visit to the assisted living facility where she lives in Parkersburg.

We ended with a day and a half in Camelot, my term for Ames. The home of Iowa State University, it was the launch pad for almost everything important in my life; the place where a country kid from little old Parkersburg found lifelong friends, his career, his wife, his future.

Best friends took us to the Iowa State Meat Labs 36th annual “Wurstfest,” where sausage and salami craftsmen from around the world come to teach, learn and eat. An ISU meats faculty member spent nearly two hours literally thanking every one of the over 200 attendees by name with gifts of chocolate, coffee mugs and/or cutting boards. Even Phyl and I walked out with a memento – simply for coming as guests of our friend.

To break up the monotony of the endless individual recognitions, this amateur emcee told four sets of themed jokes that “Hee Haw” probably would have rejected as too corny, but he still managed to be hilarious as he plowed on undaunted by the silence of “crickets” from the audience. In hindsight, the man’s passion for his beloved Meat Lab is impressive.

We stopped by the home of our good friends Steve and Holly on our way out of town. Steve has a remarkable story.  He was a noted Iowa State researcher who founded and sold a bio-tech company. But he was also captain of our slow pitch softball team, had a quick wit and helped me drywall my unfinished basement when still lived in town.

That was before a massive stroke nearly killed him in 2009, robbing him of his ability to speak and the use of his right side.  He taught himself to paint with his left hand (he’s a natural righty) and he now communicates through his fabulous paintings that have been featured in various media and galleries.

There were other stops, more laughs and plenty of good people.  So when the gang at the office is uninterested, I’m not offended.

They can’t comprehend that I just returned from one of the most inspiring places on Planet Earth. I wouldn’t trade my week in the heartland for two weeks in Hawaii or Paris. I was home again and loved every minute.

Rod Williamson, the author of this column, is director of athletics communications at Vanderbilt University in Nashville, Tenn., which happens to be the alma mater of Chuck Offenburger.  The two met and have become friends in recent years because of their mutual roots in Iowa.  Williamson has been in sports information at Vandy for 31 years, and previously worked in the same field at his alma mater Iowa State University, and earlier at the University of Northern Iowa.  You can reach him by email at rodney.h.williamson@Vanderbilt.Edu or you can comment on his column by using the handy form below here.