DES MOINES, Iowa, May 1, 2018 — It was fun being able to celebrate with two Des Moines Register editorial writers over breakfast one day last week — the recent Pulitzer Prize winner Andie Dominick and her predecessor on the staff, Bill Leonard. After he retired and then Dominick got his job in 2001, her own father Ray Dominick, who’d been a linotype operator at the newspaper, told her, “You’ll never be another Bill Leonard.”

But Leonard himself says he “couldn’t be happier” for the acclaim that’s come Dominick’s way since she won the Pulitzer for a series of editorials exposing the failures of privatization and other restrictions being placed on healthcare, especially for the poor.

“Andie works very hard, thinks very clearly, and writes very well,” he said. “It’s great that her efforts could be so grandly rewarded.” But then he had a warning for her. “There’s only one drawback to the Pulitzer — whadd’ya do for an encore?” 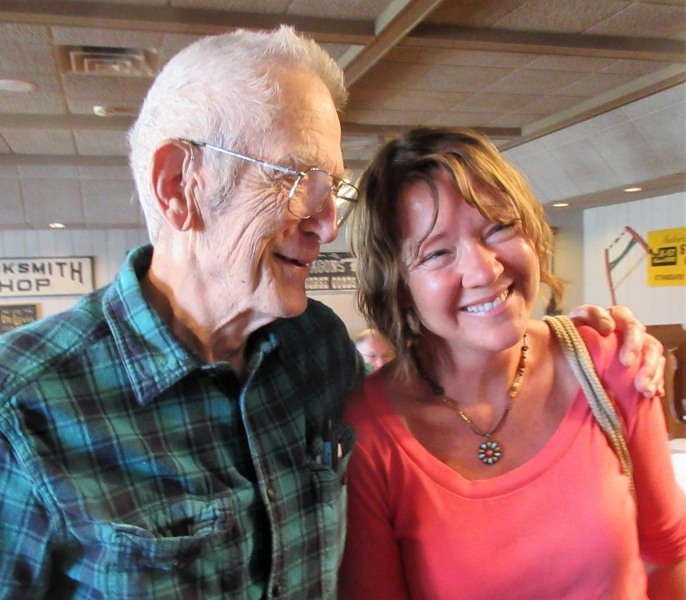 It’s hard to imagine a neater path to a Pulitzer than Dominick’s.

Not only is she the daughter of a linotype operator at the newspaper, she grew up delivering the old afternoon Des Moines Tribune and the Des Moines Sunday Register in the northwest part of the capital city.  However, after she earned bachelor and master’s degrees in English from Iowa State University, journalism wasn’t her first choice.

“When I hired her back in 2001, here was this essay from a young woman who was teaching English at Iowa State, and she didn’t have any news or editorial writing experience,” said Dick Doak, who was then editor of the Register’s opinion section. “But there was just something about her resume.  It turns out, hiring Andie Dominick was one of the best things I did at the Register.”

Now, while Leonard is celebrating his protege’s Pulitzer, he should also be celebrating the recent publication of a book — the story of his own fascinating and substantial career.

“Datelines, Deadlines and Punchlines: 44 years of newspapering and loving every minute,” is a delightful, 77-page collection of vignettes, experiences, insights and essays.

Some of the latter are re-worked stories or editorials he wrote for the five papers he worked for — The Kearney (Neb.) Daily Hub, The Hutchinson (Kan.) News, The Brookings (S.D.) Register, The Madison (S.D.) Daily Leader, and then for 31 years The Des Moines Register & Tribune.

“I wrote the book for fun, something I could send out with the Christmas cards, and it was a ball,” said Leonard, who is 88, “except that now I keep remembering what I forgot to include. Anyway, it has no price tag, and shouldn’t.”

In other words, he isn’t selling the 50 copies he had published.  But he should, and then have some more printed. Every newspaper junkie, especially in the Midwest, would like it. 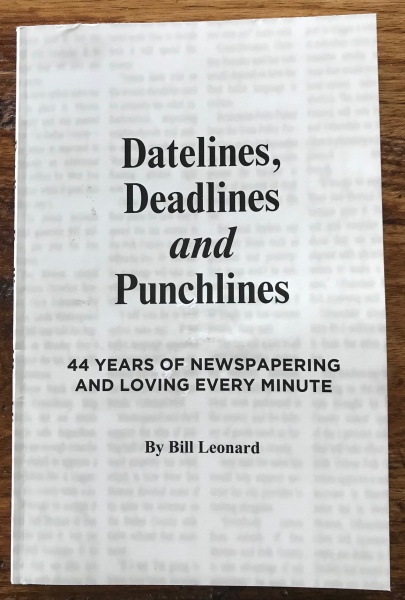 The copy of Bill Leonard’s book that I talked him out of over a recent breakfast.

Leonard was born in Red Oak in southwest Iowa, grew up in Lincoln, Neb., and graduated in agriculture from the University of Nebraska.  He served in the Army in the Korean War, then wound up as co-owner of a rustic lodge near Rocky Mountain National Park in Colorado. Meanwhile he used the G.I. Bill to enroll back at Nebraska U and pick up some journalism classes.  He started newspapering in Kearney in 1956 — at $60 per week.

Two especially interesting things about his journalism career I must share.

–First, beginning in 1961, Leonard spent about five years at the Hutchinson News when the Kansas newspaper was in its heyday, with legendary Midwestern editor John McCormally in charge. With aggressive and imaginative news coverage and strong ditorial campaigning, the News won a Pulitzer.  But McCormally was squabbling with publisher Jack Harris, who then had McCormally transferred to run the smaller Burlington Hawk Eye that the Harris chain owned in southeast Iowa.  Much of the fine news staff that had been together in Hutchinson also left, including five who wound up together in Des Moines — reporters Bob Kistler, Jack Coffman and Frank Santiago, and editorial writers Paul Stanfield and Leonard.

–Second, in 1969, when Leonard arrived in Des Moines, the Register and Tribune were also in a heyday.  Circulation of the Sunday Register was more than 500,000, the daily Register had more than 250,000 customers, and the afternoon Tribune was about 150,000.  (The Tribune ceased publishing in 1982.) For comparison purposes, in 2017 the Register’s circulation figures were reported at about 112,000 on Sundays, 62,000 on weekdays and Saturdays.  When Leonard joined the editorial writers staff, he was its 9th member.  The editor of the section was Loren Soth, No. 2 in command was Gil Cranberg, and the other staffers were Charles Foster Ransom, John Millhone, Ros Jensen, John Schmidt, Lee Ester, Stanfield and Leonard.

Collectively, they were like a think tank with Iowa’s best interests at heart, as well as a state conscience.  They developed their own specialties. Leonard’s focus eventually included environmental topics, Social Security, transportation, health and welfare.

“Back in those days, we tried to offer an opinion, or at least an in-depth look, at practically every contentious issue that came along,” Leonard said, adding that there were usually three or four editorials per edition of the Register, Tribune and Sunday Register. “Hence, we were writing about 45 editorials per week, plus or minus.”

Now the Register’s editorials are generally written by either section chief Kathie Obradovich or Dominick, although the editorial board also includes president & publisher David Chivers and executive editor Carol Hunter.  And, Rekha Basu continues to write her opinion column.

But the era of a newspaper the size of the Register having nine people assigned to write editorials is long gone.

“I suspect the editorial influence has been diminishing steadily for decades, given the falling newspaper readership,” Leonard told me.  “And what I fear is an increasing tendency to let someone or some faction do your thinking.”

By the way, he figures he wrote 10,000 Register editorials himself!

I believe he will be best remembered for his editorials in the late 1990s, advocating that the Loess Hills along Iowa’s western border should be declared a national park.  The closest national park to Iowa is 500 miles away.

Some refer to the Loess Hills as “the bluffs,” which in places are 200 to 300 feet high.  Others have called them the “Fragile Giants.”  The geology and ecology of them is amazing — with the loess golden soil slipping to form “cat-steps,” with desert-like plants, with views up to 40 miles. 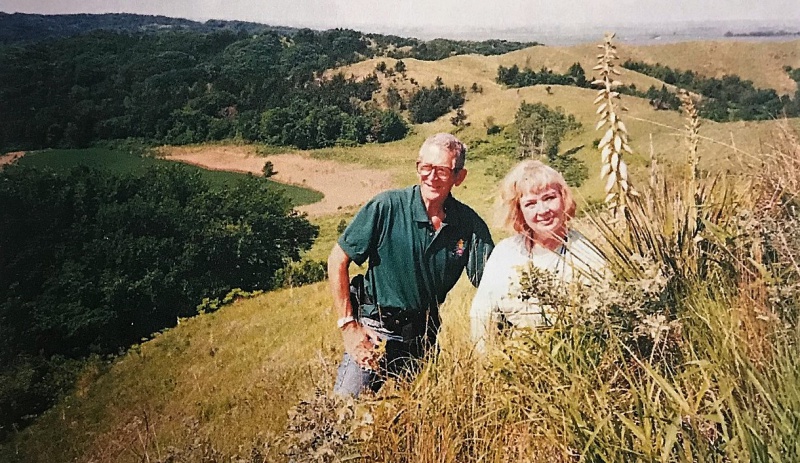 Bill and Lois Leonard in the Loess Hills.

Alas, the campaign was not successful — at least back then.

“If land is to become a national park, it must be unique, must be worth saving, and the idea must have local support,” Leonard wrote in his book. “The hills passed the first two tests but not the third, evaluators decided.”

So now, when you head east from northern Omaha on Interstate Highway 680, the Mormon Bridge takes you over the Missouri River, and then you start across Iowa’s flat bottomland. When you are at Interstate Highway 29, if you look just to the southeast, you see a big stretch of Loess Hills that are being excavated, mined or whatever.  The real story is they’re being destroyed.  And that’s not the only place in the hills where that is happening.

Bill Leonard was so right, you know?