COOPER, Iowa, May 15, 2018 – It’s been 20 years since a gubernatorial campaign in Iowa has made me squirm as much as this year’s race.

Back in 1998, the candidates were Democrat Tom Vilsack, of Mount Pleasant in southeast Iowa, and Republican Jim Ross Lightfoot, from my hometown of Shenandoah in southwest Iowa. Both were (and are) friends of mine. Both asked me to serve as press secretary after I resigned that summer from my long-held column writing job at the Des Moines Register. I turned down both offers.

Truth is, I favored Vilsack’s candidacy. Through journalism, I’d been friends with his wife Christie Vilsack for more than 15 years, and that led me to a friendship with Tom, too – a closer one than I had with Lightfoot. I was thrilled when Vilsack rallied in the last two months of the campaign to upset Lightfoot by about 7 percent.

I’d been a Terry Branstad supporter during his long first life as governor in the 1980s and ’90s. I was totally against him running again in 2010 and 2014 – I still don’t think he should have – but wound up voting for him both times.

First, a little “where are they now?” about those earlier key players. Vilsack is on-the-road most of the time as president & CEO of the U.S. Dairy Export Council and a paid advisor to Colorado State University on ag, water and development initiatives. Lightfoot is retired nicely in Texas. Branstad is in China most of the time as our U.S. ambassador there. Makes me feel like kind of an incumbent, or maybe a survivor, here in Iowa.

And here’s what I’m seeing and feeling right now about the 2018 governor’s race:

I think Reynolds, 58, of Osceola, the Republican who was Branstad’s lieutenant governor and is now trying to be elected governor for the first time, may have recently taken a big step toward victory.

I felt that happening when, late in the just-ended legislative session, she was handed a massive tax reform package and a “fetal heartbeat” restriction on abortions, and she promptly signed them into law. They’re both controversial, of course, and my old colleagues at the Register are screaming about them, but I believe both measures are going to be popular with a majority of Iowans. 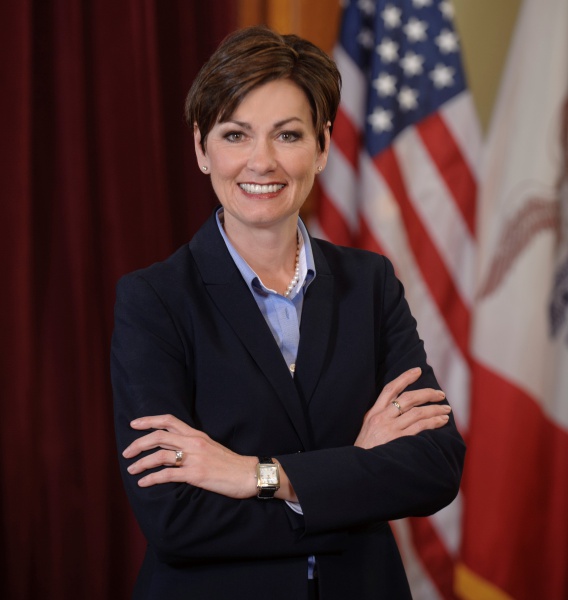 Reynolds’ actual governing of the state has been flawed, if not weak. She’s presided over excessive give-aways of corporate development incentives, underfunding of education, policy attacks on public employees, and a general weakening of state government.

But she is a walking, talking story of personal redemption; she meets the public very well, and people like her.

“My vision is of an Iowa overflowing with opportunity,” she said in her Condition of the State speech in January, “a place where you can find a second chance and overcome mistakes.”

She is going to be very tough for anybody to beat.

And for the record, since I’m going to bring up religion later here, she is a member of an Assembly of God church in Osceola.

You see, I like my governors and other key leaders, especially at the state level and higher, to be steady church goers, whatever their faith is.  It tells me they’re spending at least an hour a week outside their own heads, taking time for maintenance on their ego and character, thinking about & praying for others, while contemplating some higher power.

Hubbell, 67, of Des Moines, the retired business executive and philanthropist, is reportedly now the leader among six Democrats seeking the nomination.

There are at least three reasons I should be supporting Hubbell’s candidacy: 1) He is a very smart, visionary and good person. 2) Our little town of Cooper is named after Hubbell’s great-great-grandfather Isaac Cooper, and in 1981, young Fred and his wife Charlotte Hubbell rode in the Cooper Centennial parade as grand marshals. And 3) in 2006, when we were celebrating Cooper’s quasquicentennial, I talked Fred and his brother Jamie Hubbell into splitting the $3,000 cost to bring the “Celebration Iowa Singers & Jazz Band” to Cooper as our featured performers.

Yes, the Hubbells honor their roots, and they’ve got roots all over Iowa. 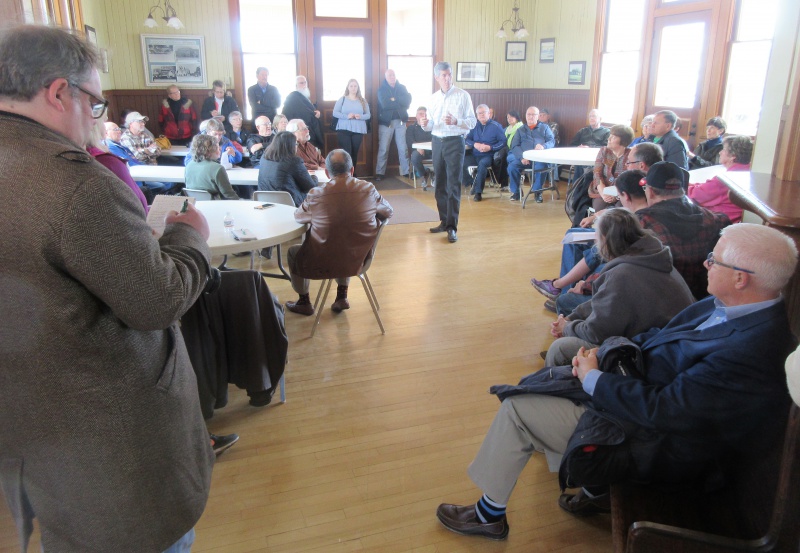 Fred Hubbell attracted a noontime crowd of more than 60 people in Jefferson recently, with only one day’s notice.

But there are also at least three reasons I’m reluctant to support Hubbell’s candidacy.

–He’s too old to be running for his first elective office. O.K., maybe 67 isn’t so bad now, but if he wins, will he want to run for re-election when he’s 71? Or would we want him to? We all have earned the right to be wary of old, rich, white guys who suddenly want to become our elected leaders.

–I might be able to tolerate Hubbell’s pro-choice position on abortion – that’s where most Democrats seem to live – but his constant championing of Planned Parenthood is maddeningly over-the-top. It’s too much for me to accept, as the pro-life Catholic that I am.

–Speaking of religion, it still bothers me that last August, when the Carroll Daily Times Herald asked Hubbell if he’s a religious person, he wobbled all over the question, even hesitating before conceding that he’s a Christian, finally explaining that he didn’t want to appear unsupportive of any other faiths. 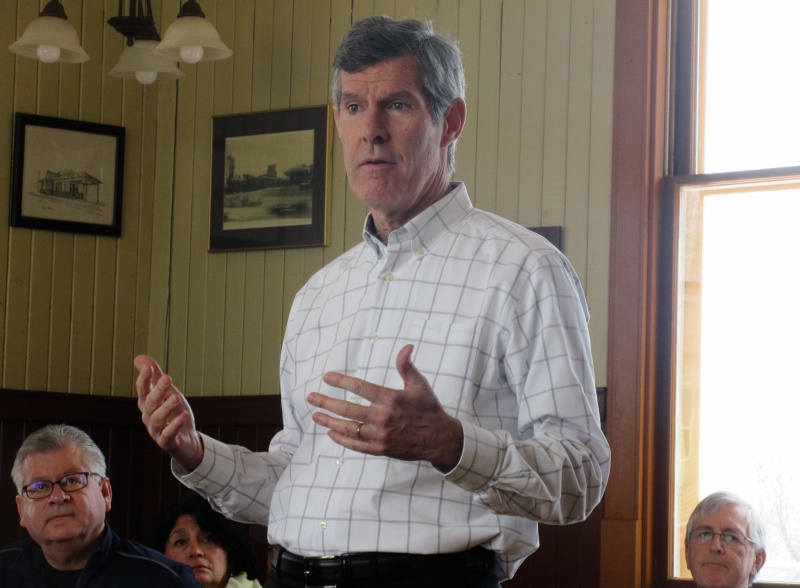 Hubbell answering questions from the crowd.

That came up when Doug Burns, of the Carroll paper, in an interview with Hubbell in Des Moines, said he’d noticed there was no mention of a church affiliation then on the candidate’s website, and asked about it.

“I largely think that faith is a personal issue,” Hubbell responded. “I grew up in an Episcopal church. We raised our kids in a Congregational church, over here at Plymouth Congregational Church. We still go sometimes. I wouldn’t say we’re frequent church-goers. But we do go sometimes.”

I wish the Hubbells would go to church regularly, even frequently. I think it would be good for them. Another reason I wish they would, churches need good people like the Hubbells.

Norris, 59, originally from Red Oak but now living in Des Moines, gets my endorsement at least for the June 5 primary election.

On the campaign trail, he refers to himself as “a farm kid from southwest Iowa.”

He is unrivaled in this field of candidates in his expertise on agriculture, his understanding of climate & environmental challenges, his knowledge of energy, his experience in government & politics, and his passion to help rural Iowa once again become as vibrant as urban Iowa.

At Christmastime in 2016, former Governor Vilsack – who was nearing the end of his service as U.S. Secretary of Agriculture – “took me out to breakfast and asked me to run for governor,” Norris said late last December. He said he finally decided to make the run when watching the Republican-led Iowa legislature, in the spring of 2017, unleash “an assault on workers, disrespect for women, abandonment of children and threats to our environment. That’s why I’m running.” 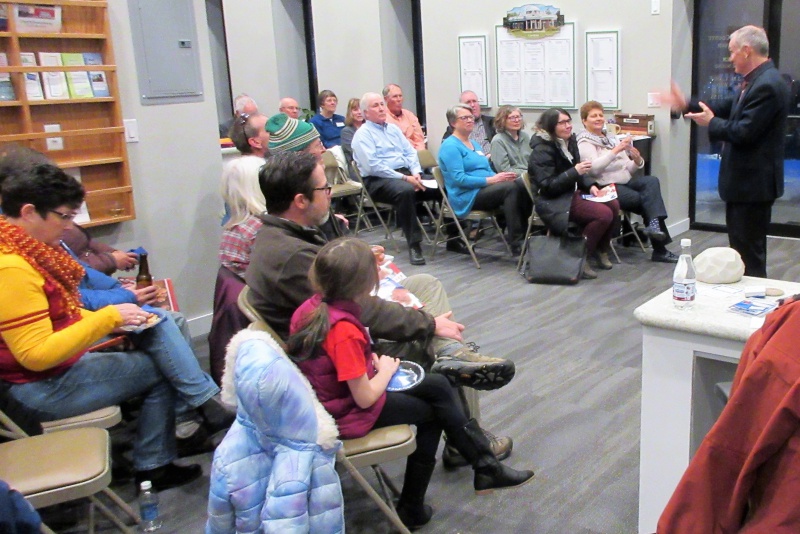 John Norris campaigning with a good crowd one evening in Jefferson.

He got a couple of surprises when some of the other candidates also jumped into the Democratic gubernatorial field – most notably Hubbell, who brought his own fortune and the devotion of a lot of business and social friends from around Des Moines. That’s made it tough for Norris to raise money during this campaign leading up to the June 5 primary election.

“I don’t have the ‘South-Of-Grand’ crowd who can write 5- or 6-figure checks,” he said in late February. “I also haven’t been the first choice among the candidates getting labor money, either. I’m in the unfortunate position – the people who are enthusiastic about my campaign can’t write the big checks. But all of those South-Of-Grand people say, ‘John, if you win the primary, we’re behind you 100 percent.’ Labor leaders tell me, ‘John, if you win the primary, we’re with you 100 percent.’

“So don’t confuse primary fundraising prowess with general election fundraising,” Norris continued. “If I can win this primary, I’m the candidate who can tie all the groups together.”

I think he’s right about that. 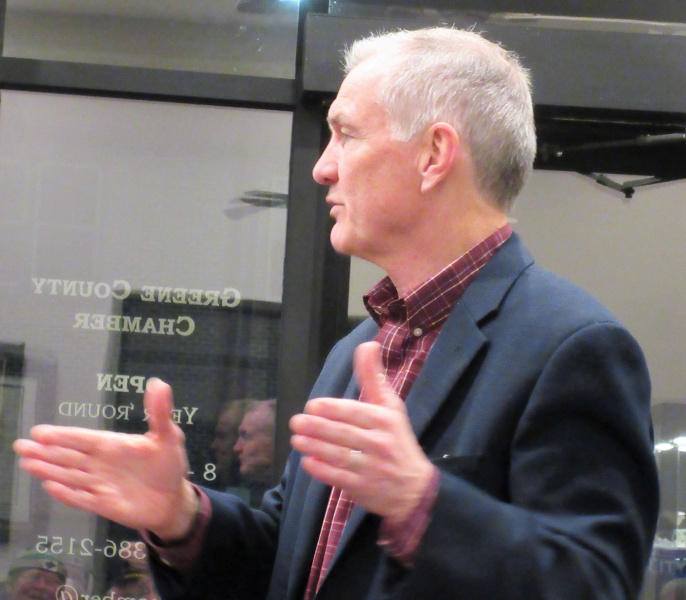 Norris has a lot of so far quiet support from Democrats we all know well.

And I think the Iowa Democrats’ old guard of Vilsack, former U.S. Senator Tom Harkin and former U.S. Rep. Leonard Boswell will actively support him if he survives the primary. He worked in key roles on all their staffs. And there’d likely be support from afar from other well-known former bosses of John’s and his wife Jackie Norris – like former Secretary of State John Kerry and both Obamas. Really, John and Jackie Norris have that kind of Democrat cred.

They go to church all the time, too – at that same Plymouth Congregational United Church of Christ that Fred Hubbell was talking about.

Yes, John Norris is pro-choice, but he quickly observes that “the goal is to protect the opportunity for life, and to reduce the number of unwanted pregnancies.” The Supreme Court’s decision in Roe v. Wade, he said last December, “respects women’s rights, and yet has some limitations, too. It’s not an easy issue. I think we’ve had a pretty good balance in this country. Running a democracy is messy, and part of governing is not going to either extreme – but finding a balance.”

With all the other positives that Norris offers, he is a pro-choice Democrat whom I can support.

This is a strong field of candidates for governor that the Democrats have offered this cycle.

Of those four, the 37-year-old attorney and state legislator Boulton has an especially bright future in government in Iowa.