DES MOINES, Iowa, Sept. 16, 2014 — When you’ve gone through a lot of cancer treatment, like both my wife Carla Offenburger and I have, and if you get another chance at good life, like we both have, you are of course very grateful to all the medical personnel who have taken care of you.  You put more faith in them than they’d probably prefer.  You begin to count on them always being there.  You just don’t expect them to, like, move away.  Or retire.  Or, worse yet, die.

And so it was one day last week that, after getting a phone call from our friend and neighbor Doug Lawton, who knows our cases well, that I was nearly in tears when I had to tell Carla, “Doug just saw on Facebook that Dr. Joe Rhoades has died.”  We both stood there speechless for a moment in the farmhouse kitchen, suddenly and profoundly saddened.  A radiation oncologist at the William R. Bliss Cancer Center at the McFarland Clinic and Mary Greeley Medical Center in Ames, Rhoades had treated both of us, Carla for two months in the summer of 2010, me for a month in January of 2011.

A heart attack took him on Sept. 10 at the age of 63.  His funeral was in West Des Moines on Monday, with burial in Des Moines, which is where he had lived since 1999.  He had at first been with the John Stoddard Cancer Center at Iowa Methodist Medical Center in Des Moines, then commuted after he joined McFarland Clinic in Ames in 2008.  He also saw patients in Fort Dodge. 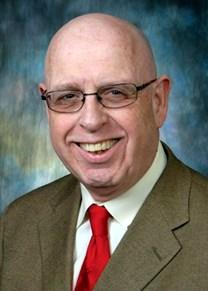 Leading up to the start of the service at McLaren’s Rest Haven Chapel, 1970s rock ‘n’ roll songs kept things light.  The last of them was, I’m pretty sure, Peter Frampton playing, “Do You Feel Like We Do,” in which he seems to make the guitar talk.  The funeral crowd loved it.  Even family members were smiling and laughing.

“That’s the most unique opening hymn I’ve ever heard,” Father Dominic McManus said, as he began the brief liturgy.  He is a Dominican priest who went to Dowling Catholic High School with the Rhoades’ daughter and son and now teaches preaching at the Aquinas Institute of Theology at St. Louis University in Missouri.

The song seemed especially appropriate for Joe Rhoades, who loved his family, fishing, old rock ‘n’ roll and good humor.  He was so good at all of that, that like rock stars, he had groupies — including a whole lot of us patients.  I’m not sure you’re really supposed to have fun going through radiation therapy, but with Dr. Rhoades, most of us did.

When I introduced myself to his wife Kathy at the service, and told her how thankful Carla and I are for his care, she smiled and said, “So you’ve heard his line that ‘Our job is to try to heal you, and your job is to laugh at my jokes,’ right?”

Joe Rhoades was more than just our radiation oncologist.  With his prominence in his medical field, he was also a hometown hero for most of us around our county seat town of Jefferson, where he grew up.  He and his twin brother Jerry, who now lives in California, were among six children of Robert and Rita Rhoades, and both parents are still living.

Fun story about our common roots in Jefferson.  Because Carla and I spent so much time in the radiation oncology unit, we really got to know everybody on the staff.  They all knew a whole lot about us.

Whatever we were talking about, Dr. Rhoades was in mid-sentence when one of the nurses walked by us.  He glanced up at her and said, “Have you ever noticed how us Jefferson guys all look alike?”  It stopped her in her tracks.  Then she punched him on his shoulder and walked away shaking her head.

There was a lifetime of such stuff with Joe Rhoades.  My neighbors Tom and Sue Wind were Jefferson High School 1969 classmates with the Rhoades twins, and they were at the funeral.  What was Joe like in high school?  “Fun,” said Sue Wind.  Tom Wind added that Joe “was an average guy, not a particularly good student so you know he worked hard when he got serious about medicine.  Back in high school, he was always up to something and, yes, a lot of fun.”

The Winds recalled that Joe and his closest pal, classmate Steve Hance, “pulled pranks all the time,” as Sue said.  “One we all remember is that Joe had this beat-up old car, and it actually had a hole in the rear floorboard so you could see the street.  The big deal back then was to ‘scoop the loop’ around the courthouse square.  He and Steve would be driving around, they’d light a cherry bomb and drop it through that hole.  Of course, they’d be a half-block on down the street before it went off.”

You know, it’s a wonder any of us survive all that we go through along life’s way.

My hunch is that Dr. Joe Rhoades figured that out.  He was into the “wonder” of it all.  I think he was determined not to miss a minute of it himself, and to help a whole lot of the rest of us live the same way.

One thought on “We cancer patients don’t really expect to out-live our docs, you know?”