JEFFERSON, Iowa, Sept. 18, 2014 — It was 1975, seven presidents ago, when Chuck Grassley and Tom Harkin went to Washington, D.C., to represent Iowa, initially in the U.S. House of Representatives.  Grassley, the conservative Republican, and Harkin, the liberal Democrat, are still at it.  They are now two of the most senior and powerful people in the U.S. Senate.

You shouldn’t pass-up a chance to visit with either one of them, and I’ve had a ball talking to both in recent weeks.

With the 74-year-old Harkin, who is retiring early next year, it was on an Aug. 3 bicycle ride.  That’s when he got his first look at a fantastic project that he directed $5.5 million in federal funding to help make happen — the High Trestle Trail  with its half-mile-long, 140-foot-high “art bridge” spanning the Des Moines River, about 20 miles north of the capital city.  He was as excited and giddy as a kid on that bike ride, actually.  You may have seen my column where I reported him saying that he “got my retirement plans figured out now.  I’m going to get on my bicycle and take a tour of Iowa’s recreational trails.”  I volunteered to ride with him.

My chat with Grassley, who turned 81 this Wednesday and started off his birthday with a 6.2-mile run (!), was after one of his “town hall meetings,” in Jefferson on Sept. 3.  He visits all 99 counties every year — people have come to refer to that as a “full Grassley” — and this year our Greene County was his 99th stop.  He announced a year ago that in 2016, he intends to run for re-election to a seventh 6-year term in the Senate.  At the end of his town hall meetings, Grassley typically saves 15 minutes for private questions from local media representatives, so I claimed some of that time when he was here. 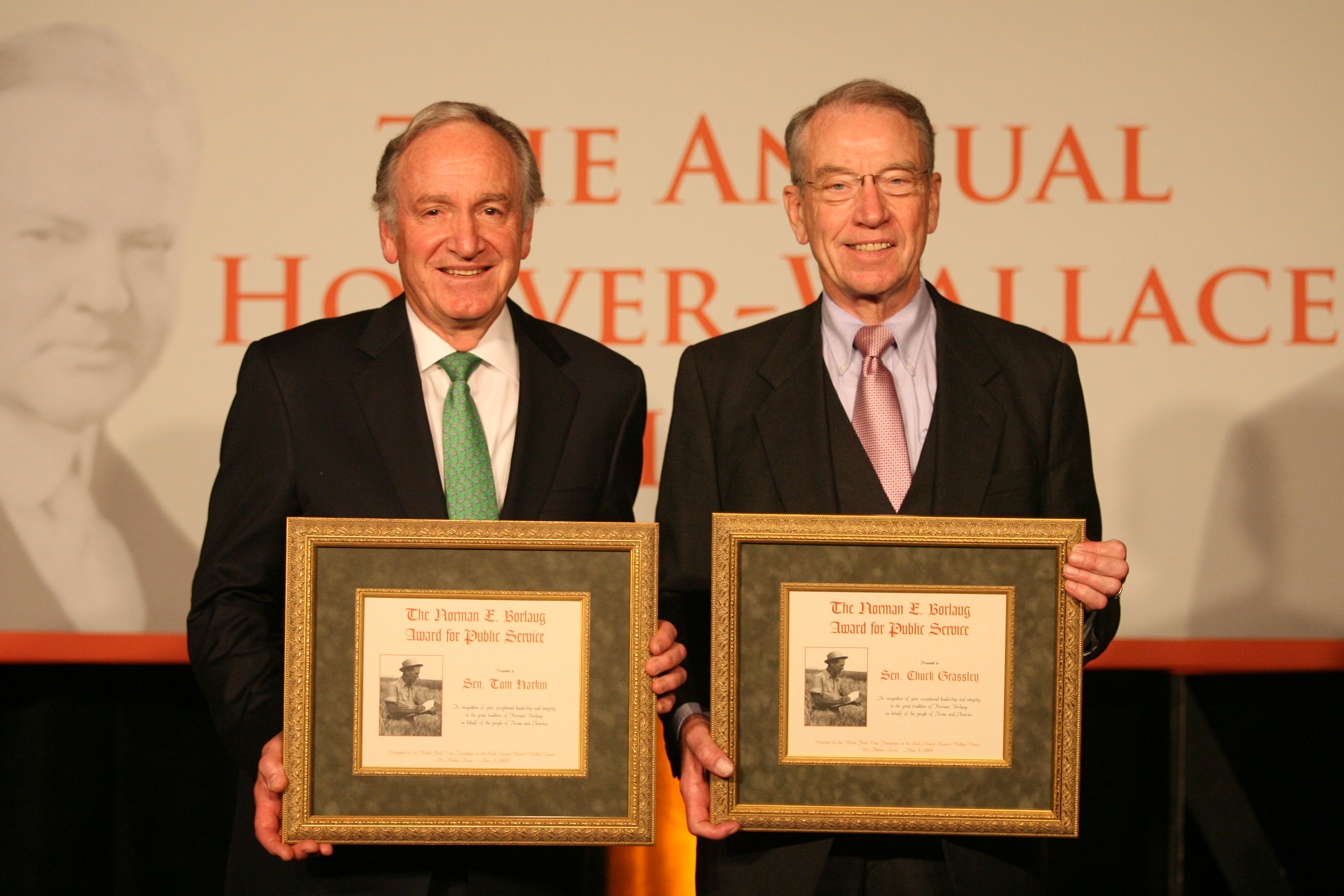 U.S. Senators Tom Harkin and Chuck Grassley together in 2009 when both were honored by the World Food Prize organization during its Hoover-Wallace dinner.

“You and Senator Harkin have been serving at the same time in Washington since waaaaaay back in the last century,” I began.

“Yeah, we went to the House at the same time,” Grassley said, “and then he came into the Senate four years after I did.”

So, I continued, “you certainly know each other well.  Now that he’s retiring, what do you think of him?  How do the two of you get along?”

His responses were just the way we’d all like politics to be.

“Considering our political differences, we’ve had a tremendously good, cooperative relationship,” Grassley said, “and for the most part, pretty darned friendly, too.”

An example of that cooperation?

“When we have a Republican president, I nominate (federal) judges,” he continued. “When we have a Democrat president, he nominates judges. We’ve decided, 30 years ago, that we’d respect each other’s nominations for judges, and we have.

“And you can go on from that. On agricultural issues, we’re almost always supporting the same positions.  And anytime there’s a natural disaster in Iowa, we’ve always worked together.”

Like in 2008, when floods devastated Iowa.  Both senators were traveling around the state, observing the damage, getting their plans formulated on asking for federal assistance.

“At one point, they were going to fly to a couple places” in the same small plane, said Beth Pellett Levine, the Grassley staff communications director. “When they first got in the plane, there was only one pilot.  Keep in mind, Senator Grassley has a very strict two-pilot/two-engine rule (when he flies on smaller planes).”  While they were waiting for another pilot, Senator Harkin, who was a pilot during his long-ago service in the U.S. Navy and Naval Reserves, boarded the plane, smiled at Grassley and said, “Don’t worry, Chuck, I’m not flying this plane.” 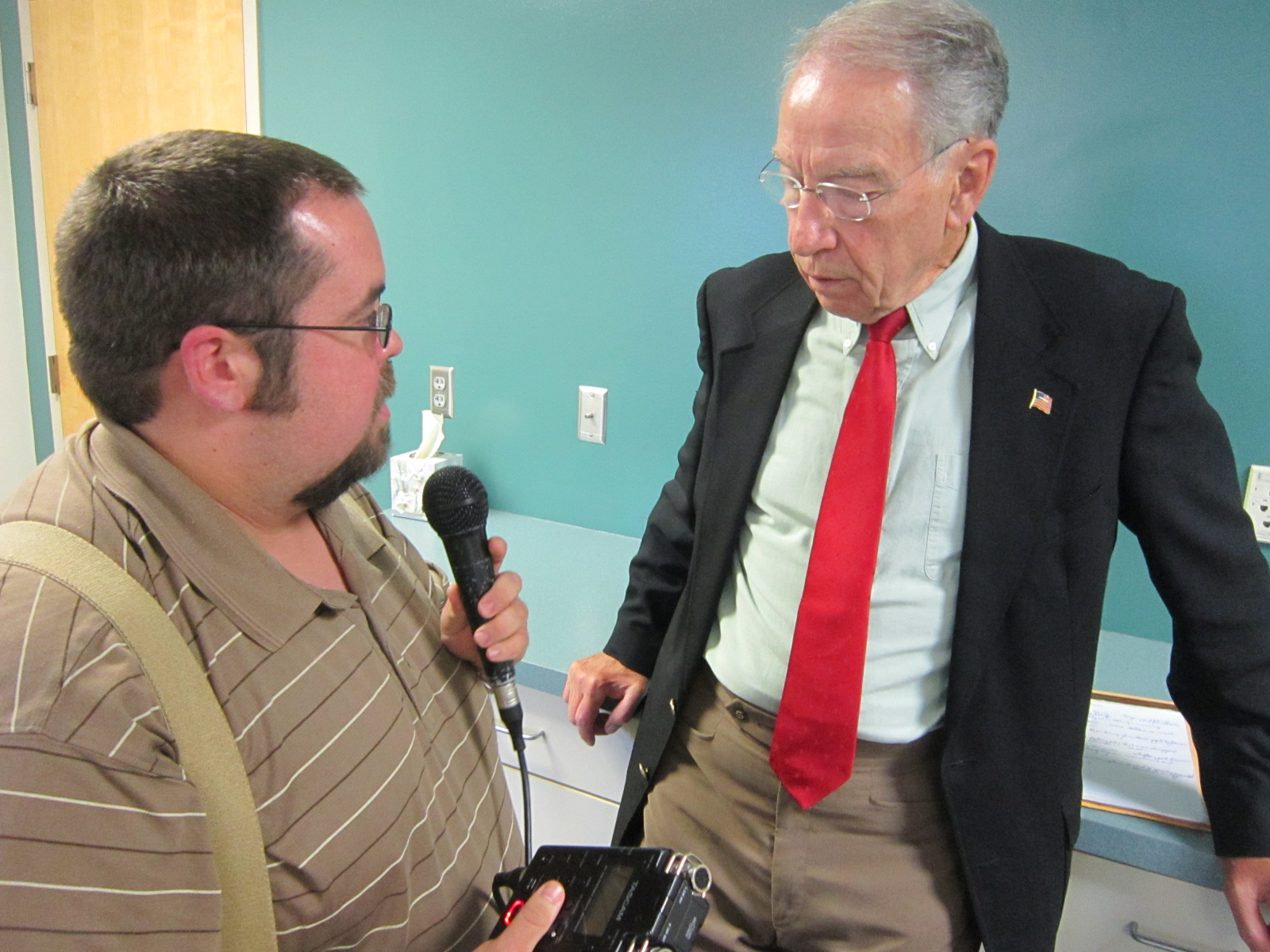 Senator Grassley taking a question from Coltrane Carlson of KGRA radio during one of Grassley’s “town hall meetings” in Jefferson in early September.

Of course, they’ve often been on opposite sides of issues. How has that gone?

There is frequent interaction between their staffs, but do the two senators themselves ever get together and talk?

“We don’t find a lot of time to have conversations, but we do talk when we need to – sometimes on the phone, sometimes he comes to my office, sometimes I go to his office,” Grassley said.

He adds that Harkin has been particularly gracious toward him.

“I remember when I cast my 10,000th vote, and I hadn’t missed a vote since 1993,” Grassley said. “Senator Harkin got up and made a speech from the floor, and he called me the Cal Ripken Jr. of Iowa politics.  He told about me making my trips to every Iowa county every year.  And he explained that even though he’s been in the senate a long time, he’s still the ‘junior senator from Iowa,’ but he added, ‘I’m the most senior junior senator there is.’

“Kind of a nice thing for a Democrat to talk about a Republican like that, isn’t it?” Grassley concluded.

The admiration, it was clear, is mutual. 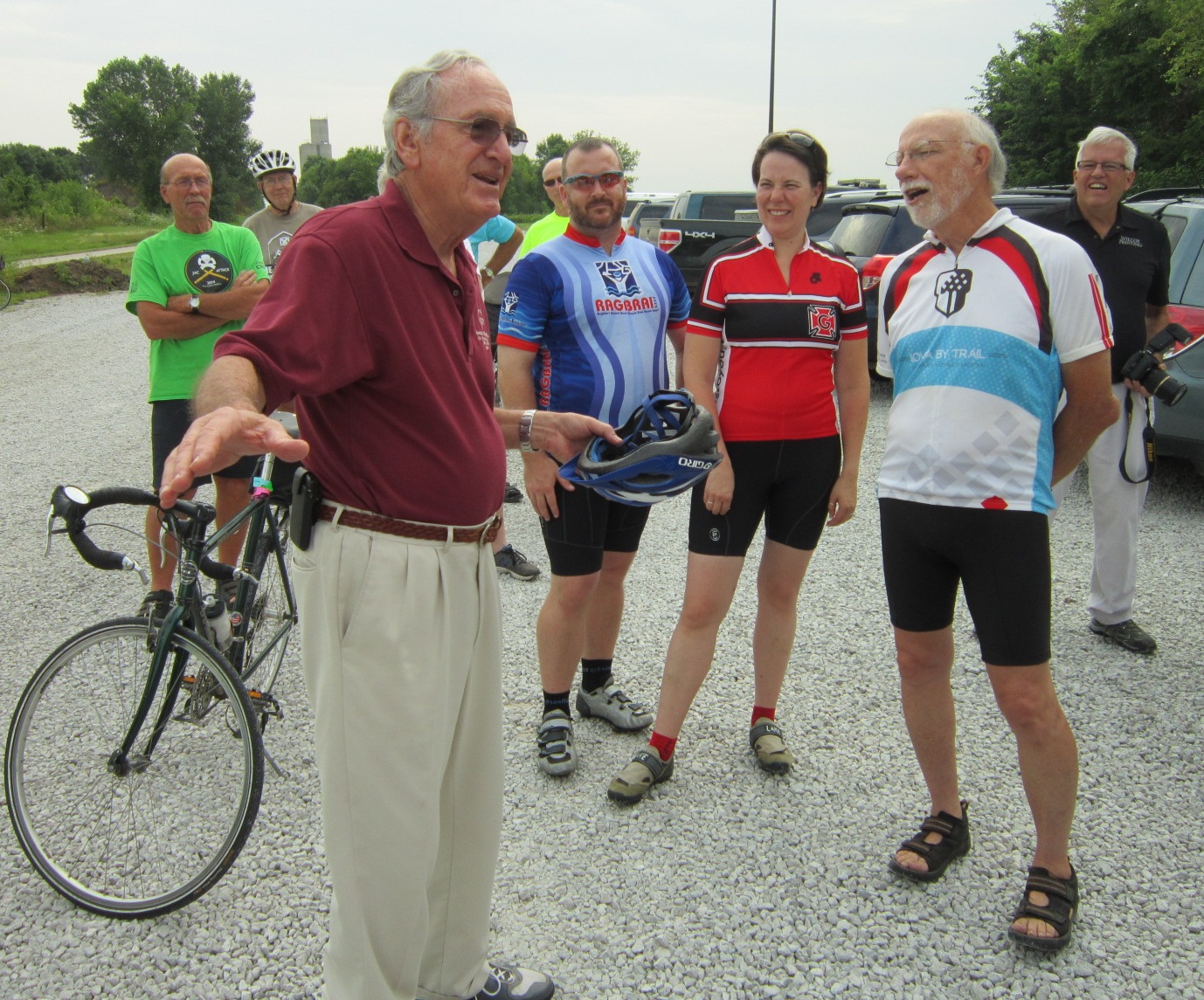 Senator Harkin arriving in the town of Madrid early in August for his first ride ever on the High Trestle Trail, for which he helped find federal funding.

A night when that was proven was in 2009, when the World Food Prize organization, which is based in Des Moines, held its annual “Hoover-Wallace Dinner,” which is named after two of Iowa’s most successful political figures – former U.S. President Herbert Hoover and former U.S. Vice-President Henry A. Wallace. The special honorees that night were Senators Grassley and Harkin.

“What I remember from that evening was that each man had 10 to 15 minutes to speak, and each used the full time to say nice things about the other,” Kenneth Quinn, president of the World Food Prize Foundation, recalled last week. “It was a marvelous feel-good moment that had never been done before or since.

“Both of their staffs went out of their way to be cooperative and deferential to the other. For example, when we discussed who would be introduced first, given his seniority, we offered that decision to Senator Grassley.  We were worried about who would get the biggest applause, with each party just cheering for their guy.  Grassley’s staff had the perfect solution.  They said, ‘Let’s have them walk in together.’ It was the perfect way to start this reaching-across-the-aisle evening.  I still remember the broad smiles on the faces of Senator Grassley and Barbara Grassley as well as Senator Harkin’s face, as the three of them came in together to a standing ovation from all the Republicans and all the Democrats in the house.

“At the head table at dinner, each senator sat next o me,” Quinn continued. “But I never got to speak to either of them for very long, as there was a constant flow of attendees to the table to congratulate them, wish them well and talk about whatever issues were on their minds. The photo of the two of them standing together with their Hoover-Wallace Awards is priceless.”

I told Grassley that even though I’ve become a term-limits advocate, I do believe one of the best things that has happened for Iowa is that he and Harkin – coming from different parties like they do – have served so long in the senate at the same time. They’ve been able to pass committee chairmanships and influence back and forth between them, keeping Iowa in a position of power no matter which party has the presidency and senate majority.

The two have been Iowa classics as statesmen and public servants – “since waaaaaay back in the last century,” as I said earlier.

It’s only right that we take time to relish that, because it’ll never happen again.