It was a salute to the wedding of Jacqui Casas and Edgar Rodriguez and their reception for 250 mostly Latino friends and neighbors, both happening in Clover Hall on the fairgrounds.  I thought about going home, getting dressed up, coming back and joining in on all the fun. Then I reminded myself that I do not know this happy couple from nearby Perry. Yet.

But what a sign of the times that was, there on the message board!

If you live in our area of west central Iowa, you may have heard or read in the last two weeks that leaders of the Greene County Development Corporation – our phenomenally successful economic development organization – are launching what they’re calling a “diversity project.” (We need a hipper name.)

They plan to contract for up to three years of leadership from Carlos Arguello, 37, who was born in Nicaragua, grew up just west of us in Carroll, is a U.S. citizen, and is a graduate in business from the University of Northern Iowa.  Then in 13 years with John Deere, Arguello became a highly-regarded young leader in marketing and development, working internationally from a base in Kansas City and eventually Des Moines.

He now lives in the Des Moines suburb of Grimes with his wife Melinda Thelen Arguello, who is also a native of Carroll, and their children Sebastian, 7, and Evelyn, 3.  Carlos’ mother is Lorena Lopez, of Denison, the co-founder and widely known editor of La Prensa de Iowa, the Spanish language newspaper serving much of western Iowa since 2006.

Carlos Arguello is now living his life-long dream of pursuing entrepreneurial opportunities, while also doing consulting with development groups, political campaigns, retail businesses and now whole communities – indeed a whole county – on being more effective and successful in this era of increasing multi-culturalism. 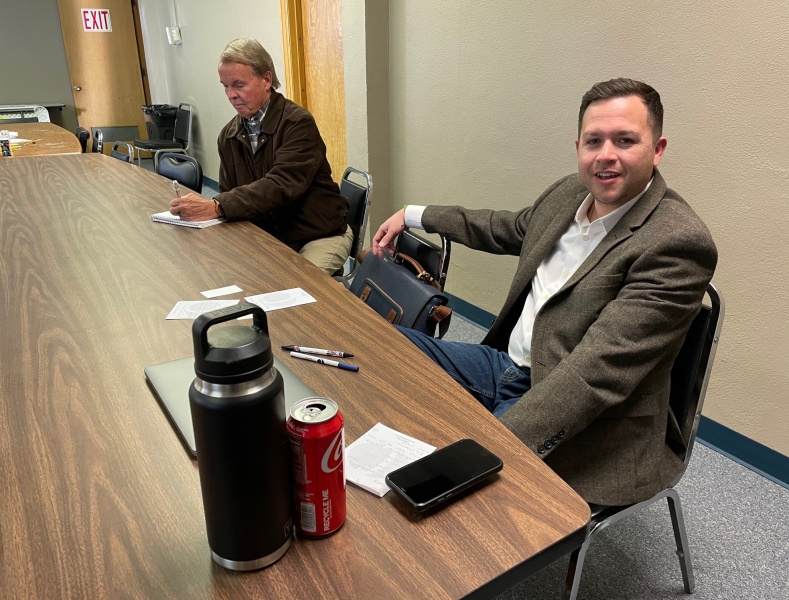 GCDC, our major employers and hopefully leaders of all our communities around the county are going to work together to recruit, invite and welcome Latino people from an hour all around us, to come give Greene County a try.  And if people of other ethnicities want to come, too, let’s make it work.

The effort here in Greene County is aimed at resolving a critical, persistent shortage of people available to work in our half-dozen growing manufacturing plants in the county, as well as our hospital, our two school systems, our casino resort, nearly all our retail businesses, professional offices, public service providers, and on our farms and in our agribusinesses.

We’ve been yelling for years, “We’re hiring in Greene County!”  We’re offering great jobs – most of them now well above $15 per hour – with good benefits and health insurance, most of them in advanced manufacturing, healthcare and hospitality.  We’re not talking meatpacking jobs.

But no effort so far has been very successful.  Meanwhile, our county’s population has now dropped to 8,950 in the 2019 count, and the population of county seat Jefferson is down to 4,137.

“One of our manufacturers expanded to a new location in Mississippi because they just couldn’t find enough workers here,” said Ken Paxton, executive director of the “GCDC” development group. “We lost 250 good jobs right there.  They could have been here.”

Paxton said that GCDC President Sid Jones, the other officers and members of the board of directors “have decided that ‘enough is enough.’ If we can’t find enough good employees, we’re going to be losing some of our major employers.  They will leave us. We’re going to do our best to keep that from happening.”

Housing for newcomers is going to be an immediate challenge, and thus the idea of starting with commuters and people sharing vans that companies here hope to provide.  But GCDC is working with contractors to build more apartments and starter homes, something all our communities need.

As you can probably tell, I’m involved.  In fact, I’m putting my heart and soul into this effort.

For 25 years, I’ve believed in this approach to answer our population and workforce decline in rural Iowa.

I learned about it while serving as a member of former Governor Tom Vilsack’s Strategic Planning Council in 1999 and 2000.  He appointed a bi-partisan group of 37 of us from across the state and across the spectrum of professions.  He charged us with researching a new vision for what Iowa should become by the year 2010, and an action plan on how to make it happen.  Among our recommendations were the Vision Iowa Program, and re-focusing economic development efforts in the state to promote advanced manufacturing, the bio-sciences and value-added agriculture, while also urging better environmental stewardship.

But our boldest recommendation was probably our call for increasing migration and immigration to Iowa from across the nation and around the world.  We recommended “opening up Iowa” to people of all races, ethnicities, nationalities and religions, and we stressed we should welcome people who want to work at all levels and kinds of occupations, from production lines to executive suites.  Population experts assured it was really the only way Iowa’s population could grow significantly.

We were mindful of Iowa’s proud history in welcoming newcomers and refugees – from the times of our initial white settlement in the 19th century, to re-settlement of people after the World Wars, and again after the Vietnam War.

While I was having that experience on the governor’s council, my wife Carla Offenburger and I had joined the faculty and staff of Buena Vista University in Storm Lake. We lived there five years and absolutely loved it.

Most of you know that Storm Lake, a town of about 15,000 in northwest Iowa, is one of the most diverse communities in the Midwest, with two dozen or more languages spoken in the public schools. Back then, it was calling itself “The World’s Hometown.”  At City Hall, they posted the office hours in three languages. And we marveled at how youngsters there were getting an international education without ever having to leave town!

For the 30 years that the diversity of Storm Lake has been increasing – it’s been mostly driven by the need for workers in two huge meatpacking plants there – the community has had thrilling growth.  It is now one of the youngest, most entrepreneurial and frankly, most fun and vibrant small towns in the state.

Among our friends there were Latinos from a dozen different nations; Hmong, Vietnamese and Lao from Southeast Asia, and a few Sudanese from the African continent.

I’ll never forget Storm Lake Police Chief Mark Prosser, who earlier in his career had been a homicide detective in the St. Louis metro area, putting his blessing on the rapidly changing population of his new hometown.

“As far as I’m concerned,” Prosser said of Storm Lake, “this is what America is supposed to look like!”

I helped two Latino friends, first Hector Velez and then Sara Monroy Huddleston win election to the Storm Lake City Council. They were among the first Latinos elected to public office in the state.

And I served on the Storm Lake Diversity Council, which had representation from all the different ethnic groups and major businesses in the area. We organized language classes, educational opportunities and lots of multi-cultural potluck suppers – which were fabulous.

There were so many good times and good lessons to learn from what was happening in Storm Lake.

One very keen insight came from my friend Rod Rodriguez, a U.S. Army veteran who’d moved from South Texas to work in a Storm Lake meat plant, but soon became a consultant on living with diversity.

“From my experience, there are five things that will bring people together across all the racial and ethnic lines that get drawn,” Rodriguez often said. “Those are music, food, sports, festivals and tragedies.  What we need to do is minimize the tragedies and emphasize the other four things.”

I really believe in all the above.  I’ve lived it.  And I want to help share it again – this time with everybody in our Greene County.

So, GCDC has asked me to head a steering committee that will try to explain this initiative to all Greene Countians, find answers to your questions, then begin building a network of people to welcome new employees here – and hopefully many new residents and families, too.

We’ll be holding public information meetings in all our towns in coming weeks.

Yes, this “diversity project” can once again fill out our workforce. And it also has the potential to fill up our schools, our churches, our restaurants, our retail shops, our parks, our theaters, our clubs and civic organizations.

What will it cost to get it started?

About $150,000 to contract for Carlos Arguello’s consulting and recruitment services for up to three years.

“GCDC is working on a grant that will provide $25,000 per year, combined with a local match of $25,000 for a yearly total of $50,000,” according to explanatory documents. “GCDC proposes to pay $13,000 of the local match, with local businesses and government providing the other $12,000.  Matching funds from our businesses and government will be key to receiving the grant.” 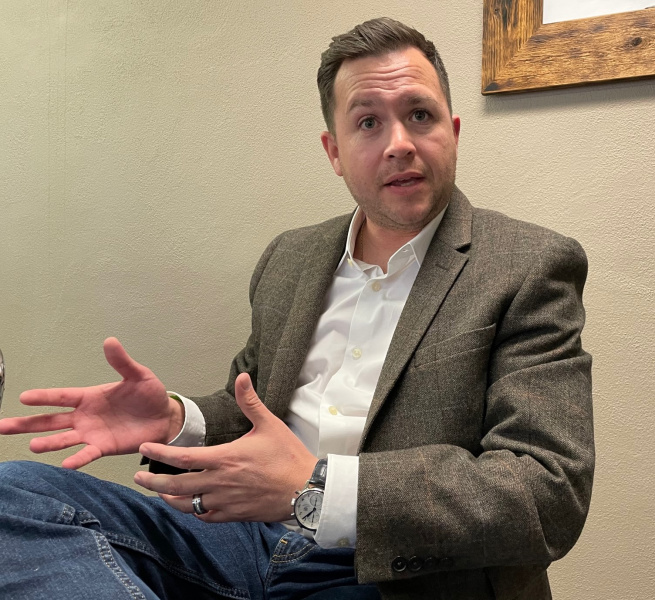 Why is the initial focus of the recruitment effort here on Latinos?

“In a way, Latinos are the only game in town, meaning that we’re the fastest growing demographic in both the state and nation,” said Arguello.  “For many years now, and for many years to come, Latinos are the reason for what population growth there’s been.  There are about 212,000 Latinos in Iowa now, and that number will double in the next 20 to 30 years, maybe not even that long.

“When you learn about the Latino culture, you realize that we share a lot of the values of rural places, especially here in Iowa.  Most Latinos want quieter places, safer places, with more space.  Latinos typically have strong faith and strong family values.  And we are a very entrepreneurial people.  We’ll be starting and developing new businesses.  And we grow the communities when we settle there.”

There’s already some familiarity here with Latino people as employees, co-workers and neighbors.

Gil Lepe’s “Casa de Oro” restaurant may be the most popular eatery in Jefferson.  Deal’s Orchard for years has had a crew of Latino workers at harvest time.  Ditto for Landus Cooperative and other grain elevators.  Many of our hog confinements are staffed by Latinos.  If you’ve had your home or other buildings re-roofed, you’ve almost certainly met Latino workers. Greene County Community Schools Superintendent Tim Christensen has said there are more than a dozen Latino kids enrolled, and added that “community response to the children has been positive, partly because of their success on the soccer teams,” according to GCDC reports. Greene County Schools also have at least one English Learning Program instructor on staff.

Paxton said the GCDC effort to grow the workforce and population here “is really about surviving.  It’s about having towns that are growing and thriving.  This is probably something that should have happened 20 years ago, but Greene County wouldn’t have been ready for it then.

“Now, we’re reacting to recent forces we didn’t see coming – like the pandemic, the increase of working remotely.  Those have given us even more of a rural challenge, as far as maintaining or growing our workforce.

“With our diversity project, we’re the first rural county to come up with a plan to do something about it,” Paxton continued. “If we’re successful, we’re going to have a bunch of people getting on the bandwagon fast.”

If we act with open hearts and open minds, Greene County will be heralded as one of the great rural success stories in America – and maybe beyond.

You can write the columnist at chuck@Offenburger.com or comment by using the handy form below here.

One thought on “Time for Greene County to diversify and grow. We start by welcoming Latinos to come join us”