DES MOINES, Iowa, Aug. 23, 2016 — For three consecutive Iowa State Fairs now, I have been part of the judging team for “Mother Podolak’s Chili Contest.”  with the radio voices of the Iowa Hawkeyes football team, play-by-play commentator Gary Dophin and color analyst Ed Podolak.  It’s been about as much fun as anybody could responsibly have while judging chili.

As you might imagine, if you know us, a lot of stories pop out.  Our goal is not only to pick a good chili — “as good as Mom’s,” as Ed puts it — but also to have fun with whatever crowd shows up.

“When you give the three of us a microphone,” Dolphin said when we were at the fair in 2015, “it doesn’t matter whether there’s a crowd of 3 or 300 — we’ll fill whatever time you give us.”

I’ve known Dolphin about 25 years, going back to when I was hanging out at the old National Catholic Basketball Tournaments that Loras College used to host in Dubuque.  Dolphin is a native of Cascade over that way, but in his adult life he has always lived in or near Dubuque, where in addition to his sports broadcasting, he has also been a banker — still is part-time, in fact.  I love his story how his broadcasting career has its roots when he was a boy in Cascade, playing imaginary basketball games on an outdoor court, and he was not only doing all the dribbling and shooting, he was also doing the play-by-play! 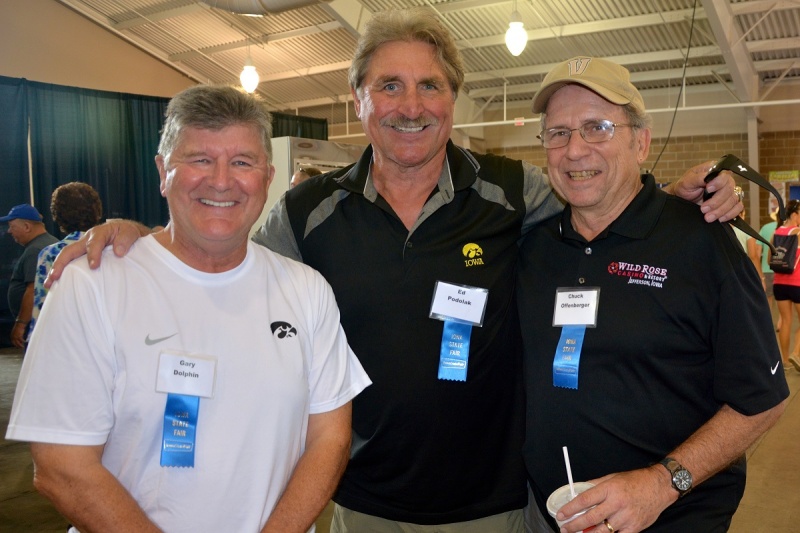 I’ve known Podolak even longer.  Ed graduated from Atlantic High School in 1965, the same year I graduated from a sports rival, Shenandoah High School.  He was one of the finest high school athletes this state ever produced, and I was a beginning sportswriter back then and got to cover him.  We also played baseball against each other.  As Hawkeye fans know, Ed and his younger brother Charley Podolak went on to the University of Iowa, where both played football.  Ed was a solid college player, first as a quarterback and then as a running back, on some woeful Iowa teams.  He went on to play his best football as a running back for the Kansas City Chiefs in his 9-year career in pro football.

Podolak has been successful in business, too, primarily in real estate and property development.  He now lives most of the time in Costa Rica, where he’s a partner in vacation resorts, and one of his partners is Gary Kirke, of West Des Moines.  Kirke is the former insurance executive who is now enjoying a fun later career as founder of Wild Rose Entertainment, which has three casinos in Iowa — including in my county seat town of Jefferson.

Podolak has been the color analyst of Iowa Hawkeye football games since shortly after he left pro football. Earlier he worked with legendary play-by-play broadcaster, the late Jim Zabel.  When Zabel stepped down at the end of the 1996 season, Dolphin was picked to become the “Voice of the Hawkeyes,” and he and Podolak are now getting ready for their 20th season together calling Iowa games.

From the mid 1960s into the new century, Podolak’s parents Joe and Dorothy, who lived on a farm outside Atlantic until they later moved into town, spent many fall Saturdays in Iowa City for Hawkeye football games.  As the tradition of tailgating grew, Dorothy started bringing along a big pot of chili.  Often she’d serve it in the big motor home of Jim and Kirk Tyler, the Podolaks’ friends from Atlantic.  Among those who became regulars in the motor home for a bowl of Dorothy’s chili was broadcaster Zabel.  Many of you may remember him bragging about that chili on the air during the football games.  Her chili became famous enough that some entrepreneurs in the Des Moines area started marketing it in grocery stores. 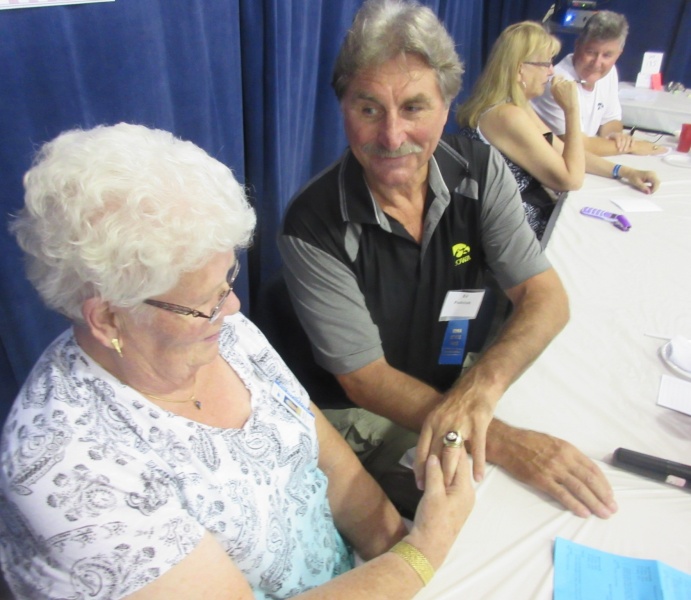 When the clerk who was writing down Ed Podolak’s remarks during our chili judging at the Iowa State Fair, noticed his big ring, she asked to see it.  Podolak won it playing in a Super Bowl for the Kansas City Chiefs.

Business exec Kirke has long been a fan of not only chili, but also of the Iowa State Fair.  About a decade or so ago, he started sponsoring his own chili contest at the fair, and then in honor of his longtime friendship with the Podolaks, he decided to re-name it “Mother Podolak’s Chili Contest” and pay the substantial cash prizes that go to the top three placers.

Joe and Dorothy Podolak died in 2008 and 2009 respectively.  As we were starting into the chili judging on a recent day at the fair, I asked Ed Podolak to tell our crowd what his mother was like.  “She was a country school teacher — with a paddle,” he said. “There was no shortage of discipline in the Podolak house when we were growing up.”  Besides Ed and Charley, there’s also their younger sister Betty, now Betty Ward.

One of those intriguing stories that has popped out during chili judging was in 2015, when Ed recalled that in 1960 or ’61, he was attending junior high school in the small town of Lewis, nine miles southwest of Atlantic.  The Podolak farm was southeast of Atlantic, and east of Lewis.  “I was planning on going to high school in Lewis,” he said.  However, after a fire in the Lewis school building, local voters decided to merge their school district into Atlantic’s, with the Podolaks in the first wave of Lewis students to enroll.  Had that not happened, life might be very different today for the Podolaks and many others.  Why?  Old Lewis High School did not offer football! 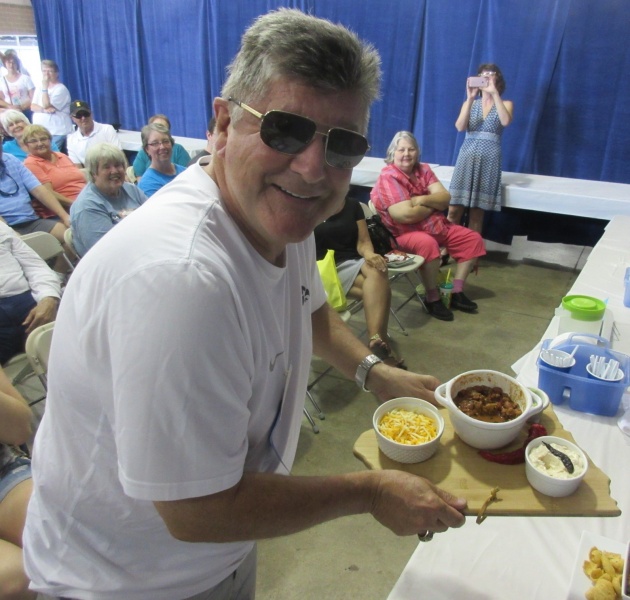 Gary Dolphin is shown here handing off the winning entry in this year’s “Mother Podolak’s Chili Contest” at the Iowa State Fair.  “I’m not trying to imitate Hayden Fry,” he said of the dark glasses for which the old coach was known. “I just left my regular glasses in the car.”

As, yes, the stories.

I was telling Dophin and Podolak that I can remember one time in my Des Moines Register years, one of our food writers did a feature story on chili — and asked well-known people around the state for their recipes.  Hayden Fry, the Hawkeye football coach then, sent in his recipe for “Hayden Fry’s 5-Alarm Chili.”  It was a concoction “so hot,” Coach Fry said, “that you have to apologize to your innards  before you eat it.”

That reminded Podolak that “one time Hayden told me that what makes chili so good in west Texas is that ‘they put the whole armadillo in it’.”

We eventually got around to football stories, too.

I told Dolphin that in my reading of the preview stories about this fall’s Iowa Hawkeyes, it seemed to me like most of the players and coaches seemed unusually happy and good-natured in their quotes.

“Well, when you go 12-2 the season before, have one of the best offensive lines in the nation coming back, have several top defensive players back and an outstanding quarterback,” said Dolphin, “if that wouldn’t make you happy and good-natured, I don’t know what would.”

As we continued eating and judging chili, Dolphin then went position-by-position around the Hawkeyes’ line-up, and got several Iowa fans in our crowd excited. 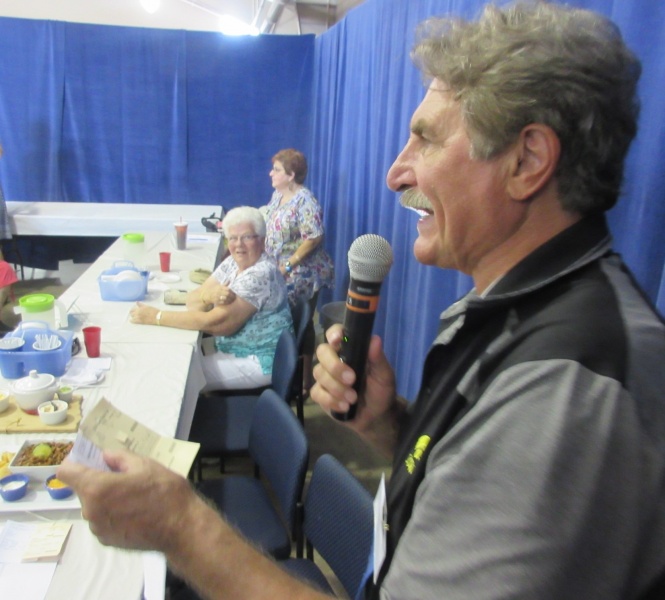 Ed Podolak announces the winner of this year’s “Mother Podolak’s Chili Contest” at the Iowa State Fair.  The award went to Jacqueline Riekena, of West Des Moines, who’d had the runner-up entry in the 2015 contest.

So then I said to the old quarterback Ed Podolak, “Complete this phrase, Ed: The returning starter C.J. Beathard could be the best Iowa quarterback since…”

Podolak paused only long enough to put down his chili bowl, then said with conviction, “Ever!”

He cited’s Beathard’s experience, his instincts, his grit “and we’ve never had a kid who could throw the ball like he can,” Podolak said.  “If he can stay healthy, he’ll be something special.  I’ve talked to Chuck Long about it, and he agrees.”

That’s some high praise for Beathard.

The chili could be especially good this fall. 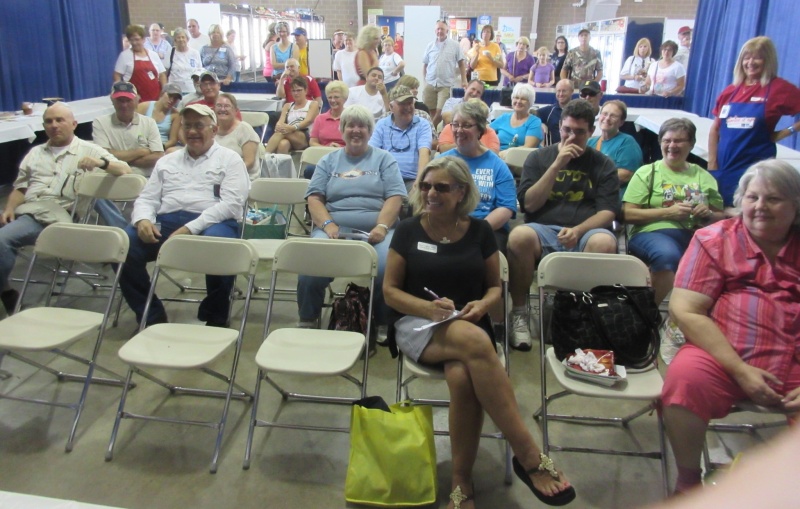 Part of our happy crowd during chili judging at this year’s Iowa State Fair.