Our Chuck Offenburger has again been back to the town of Jackson Junction, where since 1980, the school’s seniors have been picking one of their classmates as a genuinely “good gobbler.”  Offenburger takes the “Turkey” to lunch, does an interview and buys the winner’s family a Thanksgiving turkey.  He says it’s a tribute to the school and its communities how well all the “Turkeys” have done in life.

JACKSON JUNCTION, Iowa, Nov. 28, 2013 – After all these years, Turkey Valley High School and I have a lot in common. We’ve both lived through some serious challenges, we both get told we look pretty good for all that, and we’re both still here and trying to do good work. After surviving and recovering from cancer, I’m glad to be anywhere, and especially glad this time of year to be back at Turkey Valley for a renewal of our shared Thanksgiving tradition – the naming of the “Turkey of the Year.”

The 34th “Turkey” is Riley Meirick, who lives in the town of Protivin.  That is one of seven communities that make up this sprawling northeast Iowa school district that gets its name from its location between the branches of the Turkey River.

Meirick will be graduating next spring among the top five students in Turkey Valley’s smallest graduating class ever, with 29 members. 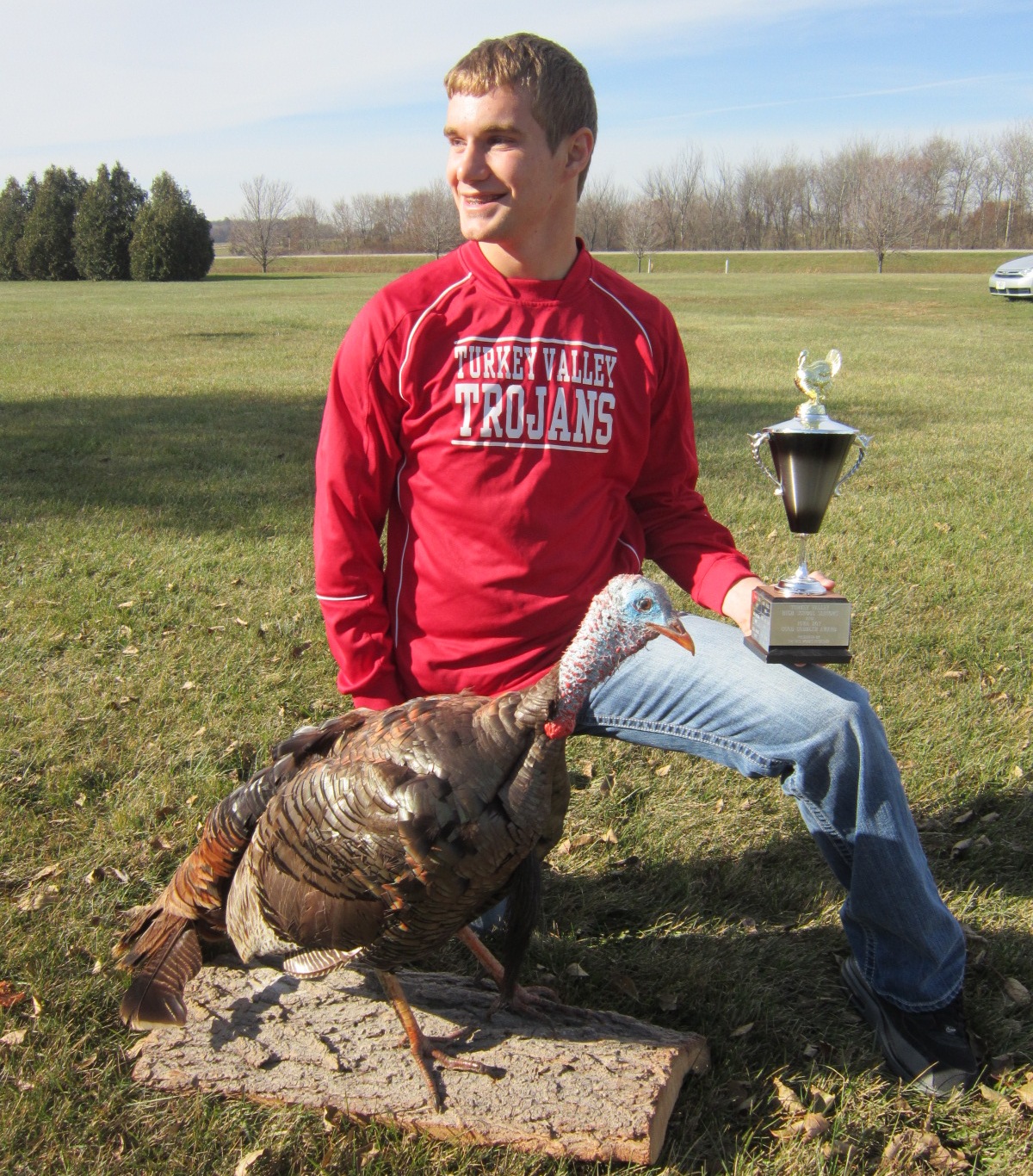 Riley Meirick, the 2013 “Turkey of the Year” with the traditional trophies.

Declining enrollment in rural schools like this one has been a challenge since the Farm Crisis years in the 1980s.  Turkey Valley now is sharing its superintendent and some staff with the neighboring South Winn Schools, and everybody knows there will be more sharing and maybe even a consolidation in future years.

In the meantime, TVHS continues to motivate, innovate and educate solid, well-disciplined young people, nearly all of whom seem to do really well in life and are happy.  That’s certainly been the case with our “Turkeys of the Year,” who are scattered widely in locations and occupations.

“Turkey Valley isn’t as big as a lot of other schools, but I think it’s still a pretty good one,” Meirick said. “We’re still updating all the time.  This year, the school has provided a laptop computer – Samsung Chromebooks – to every high school student.  The staff keeps the building real clean and nice.  The teachers are really good, and most of them have been here a long time, so they really know us. If anybody needs extra help with classes, the teachers are right there for us.”

And small-school kids are generally very well-rounded.  They wind up at least sampling nearly every extra-curricular activity their school offers, plus are involved in community and church projects.

Riley Meirick is a good example of that.  He is a National Honor Society member, generally on a college prep track, and this fall is taking accounting, “senior careers,” math analysis, developmental psychology, conflicts in American history and college-level composition.

His favorite subject area has “probably been history and social studies,” and that means teacher Timothy Kruckman has had him four consecutive years.

“Riley is a super kid to have here at Turkey Valley and specifically in my classroom,” Kruckman said.  “He is well respected amongst his peers and has proven to be a helpful group member on projects.  He has always been a solid student who does not mind putting effort into his work.  I wish more students were like Riley because he never complains about anything.

“I also appreciate his quiet demeanor, and I know that he is waiting to deliver a well-timed one-liner with so much dry-humor attached to it that you need a glass of water to take it all in,” the teacher added.

Meirick is a four-sport athlete.  He was an All-District defensive back and running back for the 7-4 Trojans football team; is now working hard to cut weight for his senior wrestling season, hopefully in the 152-pound class; plans to play golf next spring, and then take his place as catcher, pitcher and utility player on the baseball team.  In addition, in December, he will become the eighth Meirick from Protivin to receive the Eagle Scout award in Boy Scouts. And he has served as an acolyte, usher and flag bearer at Holy Trinity Catholic Church in Protivin.

Riley’s parents Mark and Wendy Meirick are both Turkey Valley graduates and have older sons Lee, 25, a Luther College graduate who works for a healthcare software company in Kansas City, and Quinn, 22, an Upper Iowa University grad who works in the family’s Farmers Mill grain elevator operation in Protivin. 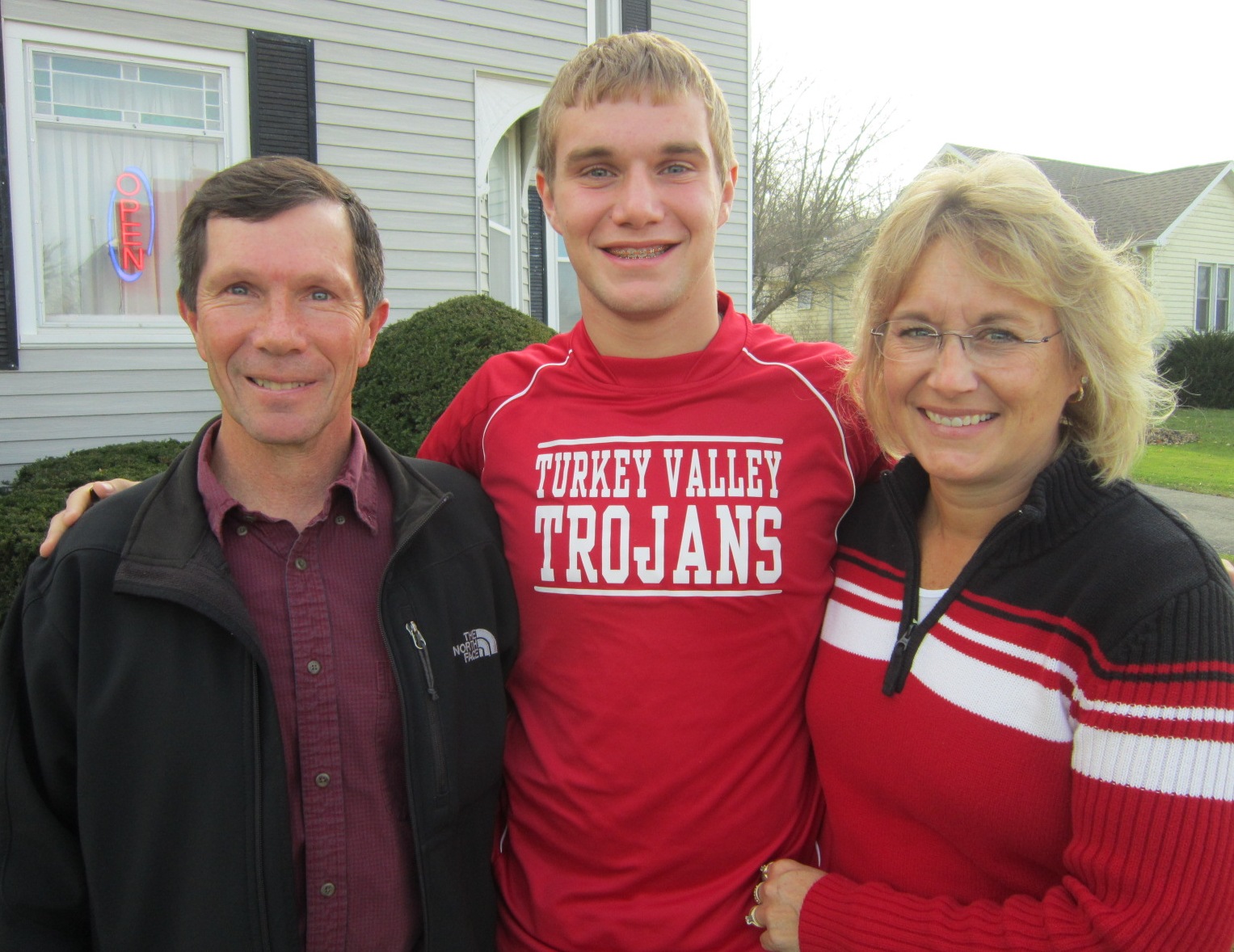 “Turkey of the Year” Riley Meirick with his parents Mark and Wendy Meirick, of Protivin.

The milling business in that community is interesting..  Besides the Meiricks’ Farmers Mill, there is another grain elevator, Art’s Milling Service, owned by the Bruess family.  It’s highly unusual to find a family-owned grain elevator anywhere in Iowa now, let alone two in the same small town.

As Mark Meirick tells it, “our dad Bill Meirick started us into it in 1964 when he bought the business.  Dad says he almost had to, because we were a family of eight kids living on a farm near Elma, and it was getting harder and harder to make a go of it out there with a family the size of ours.  I mean, I was in second grade and I was the oldest of eight kids! When we’d march down the church aisle, you talk about seeing a family that was ‘stair-stepped’ – that’s how we looked coming down the aisle.”

Now, Mark and his brothers Joel and Dennis share the management of the mill, but their dad Bill “is still our emotional leader,” Mark says.  In addition to having his son Quinn on the staff full-time now, “all the grandkids work there, at one time or another.”

Meanwhile, Wendy Meirick works three days per week as a para-educator at Turkey Valley, supervising 17 three-year-olds in the pre-school program.

Riley Meirick says he’ll likely study business or ag business in college, which he says could take him to Iowa State, Kansas State or the University of Northern Iowa.

His closest pals figure him to be successful, wherever he lands.  They are his classmates Riley Busta and Riley Buchheit.  That’s right, there are three “Rileys” in a class of 29, and the three of them run around together all the time.  “We pretty much go by last names when we’re together,” said Meirick.

Buchheit and Busta are both basketball players, and they say when the three get together, they’re usually watching football or playing other sports.  “And we go eat at McDonald’s or some other restaurant,” Buchheit said, “except now when Meirick is cutting weight for wrestling, he’s usually watching the two of us eat.”

He concurs with Busta, though, who said, “Riley Meirick is a leader, smart and outgoing.”

Another good one coming out of Turkey Valley High School.

BTW, you can email him at meirickriley@turkey-v.k12.ia.us. 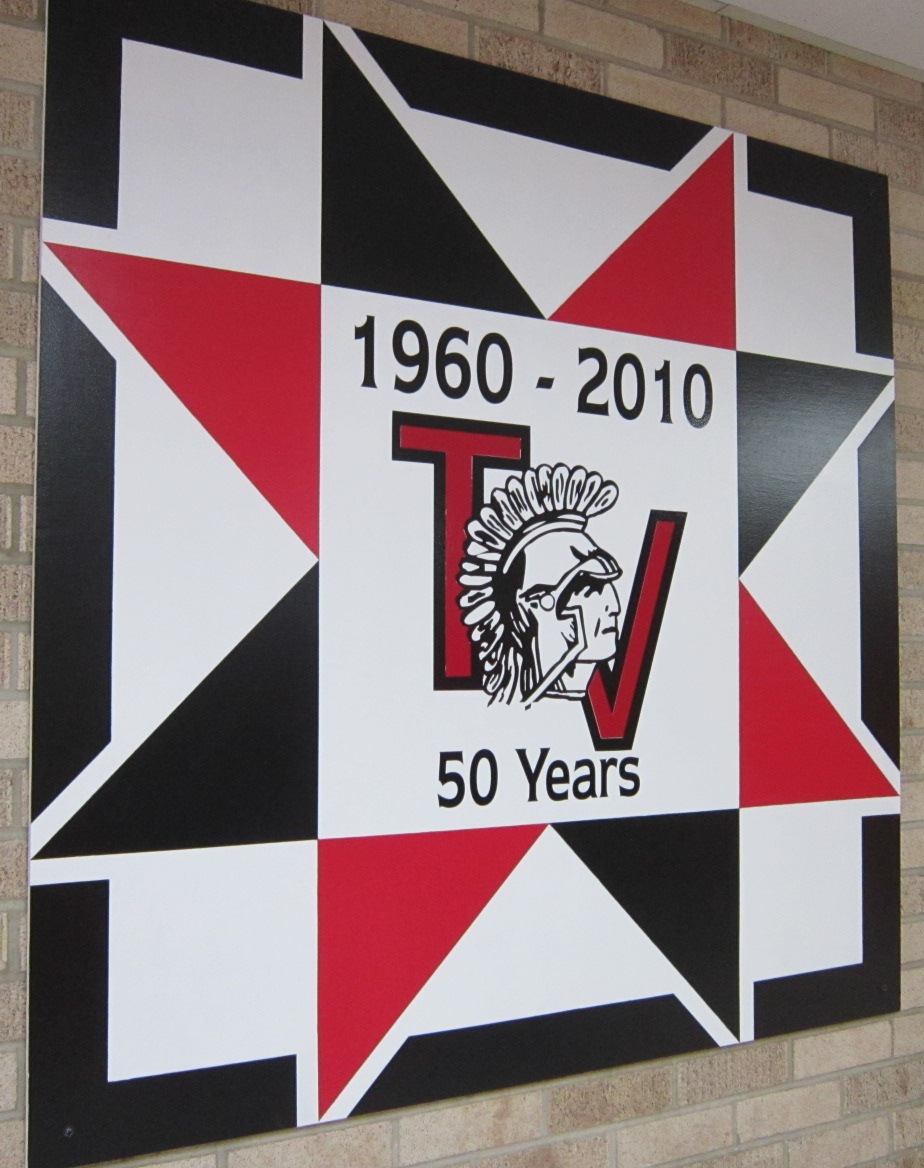 The Turkey Valley barn quilt from the school’s 50th anniversary.

One of the longest-standing traditions at Turkey Valley High School is the “Turkey of the Year” honor.  In 1980, I came through here as a young Des Moines Register columnist, wondering if anybody ever made much of the school’s “Turkey” name at Thanksgiving time.  People trotted out their favorite stories – athletic opponents referring to the TVHS teams, officially the “Trojans,” as the “Gobblers,” and also calling Turkey Valley’s home fields and courts “Gobblers Gulch.”

I suggested that I partner with the senior class, and that each November they would vote one of their classmates as Turkey of the Year, with no specific qualifications other than being “an overall good gobbler.”  There is no grade-point requirement, candidates don’t have to be top athletes, or musicians, or thespians – just good kids.  The idea took root, and here we are 34 years later with a roster of past “Turkeys of the Year” that are spread across the country, nearly all of them successful in life.  One is deceased, 1989 honoree Dana Reicks, who died from cancer in September, 2008. 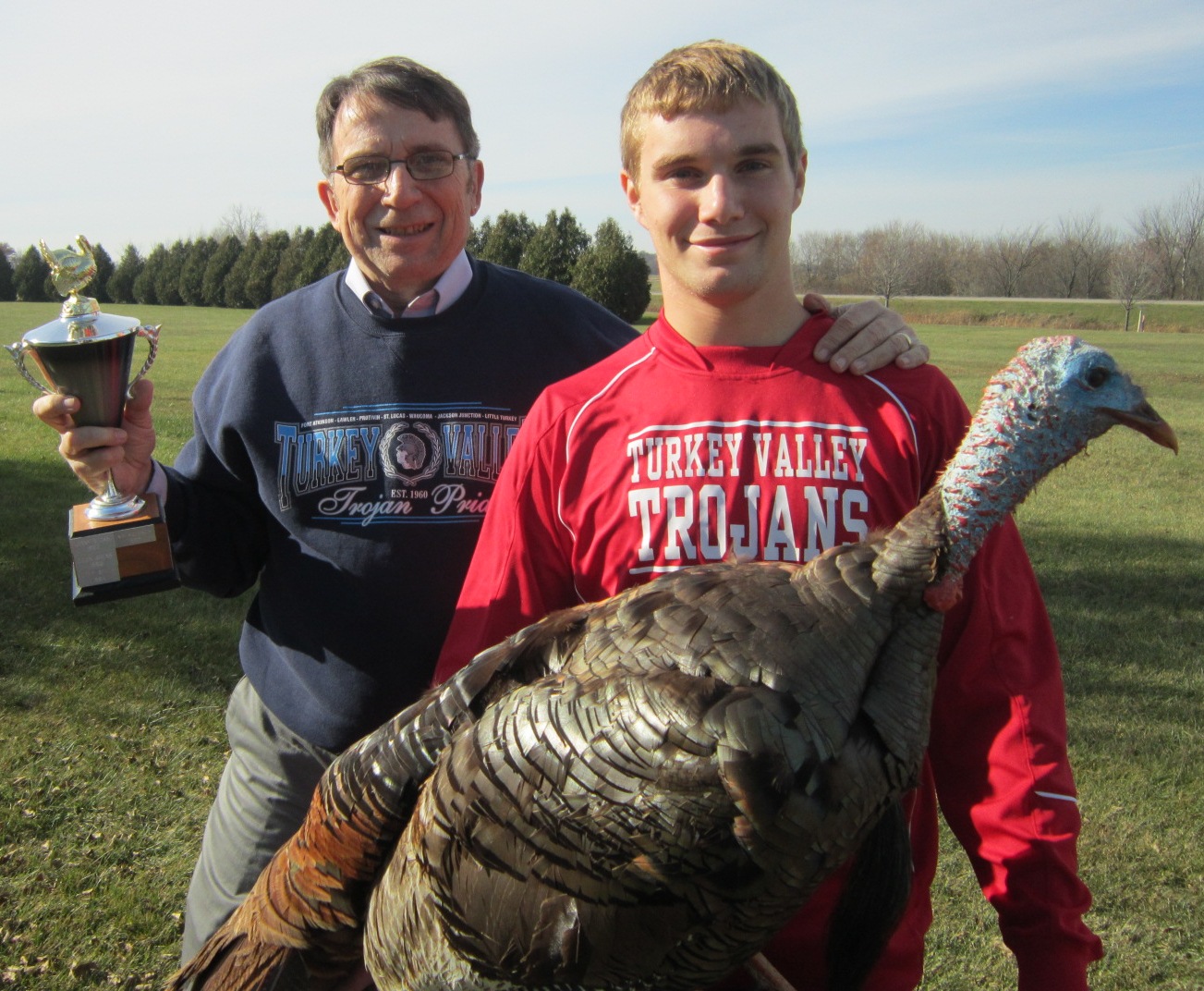 One thought on ““TURKEY OF THE YEAR.” Our Thanksgiving tradition continues at Turkey Valley High School in northeast Iowa. Here we introduce the 34th “Turkey,” Riley Meirick.”