PERRY, Iowa, Nov. 4, 2013 — As the Hotel Pattee re-opens here today after being shuttered since late July, let’s recall one of the grand moments it has given us in the past — like the time in the fall of 2004 when Ted Kooser, the poet laureate of the United States, came to read his original poem for the dedication of the huge “Reconfiguration Arches” on the hotel’s plaza to the east. Those arches, or gateways, had just been completed by internationally-renowned sculptor Albert Paley, tributes to the workers in the factories and foundries of Perry.  Think about that for a moment.  Because the old hotel was saved and totally rebuilt by wealthy Perry native Roberta Green Ahmanson in the 1990s, and because she continued the renaissance on downtown properties adjacent to the hotel, we actually had a day with the poet laureate of the U.S. reading an original work about a huge art installation by one of the world’s top sculptors — right here in west central Iowa.  The hotel hasn’t always been a business success, but it has been a smash hit when it comes to enhancing our local culture, lifestyle and pride. 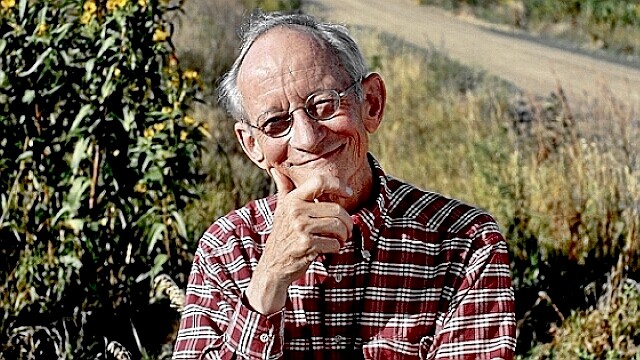 So here, in tribute to all that has happened at and around the Hotel Pattee, all of which has made most people want to see it thrive and prosper, is Kooser’s poem from 2004.  Below here is a photo of the larger of the two Reconfiguration Arches, the one on the south end of the “Soumas Court” plaza, while a slightly smaller one is on the north end of the plaza.  Another photo below shows a bronze plaque on the wall next to the larger arch, with the words of this poem.

Bell, gong, and cymbal clang when struck,
raising within them the old music of labor,

vast choirs of molecules praising
the artisans’ hands on the burning ladle,

their backs bent sore at the ringing anvil,
forging chords with hammer and tong.

For all things beaten into shape, or cast,
or welded together, auger and plowshare,

bridge and rail, cling always to the music
that went into making them, the notes

that fell with every drop of sweat,
even the plunk of a lunch pail set down

among the curls of shavings on a bench,
and the clink of the wrench knocked off

to the oily floor.  Every cough and curse,
every laugh, good joke and bad, the snap

of the spark at the tip of the torch, the chirp
of the foreman’s whistle, every sound

of life lies in the girders, rods and rails
that shelter us, that carry us across the years

working and singing, talking and laughing,
telling our stories, passing through.
— Ted Kooser, 2004 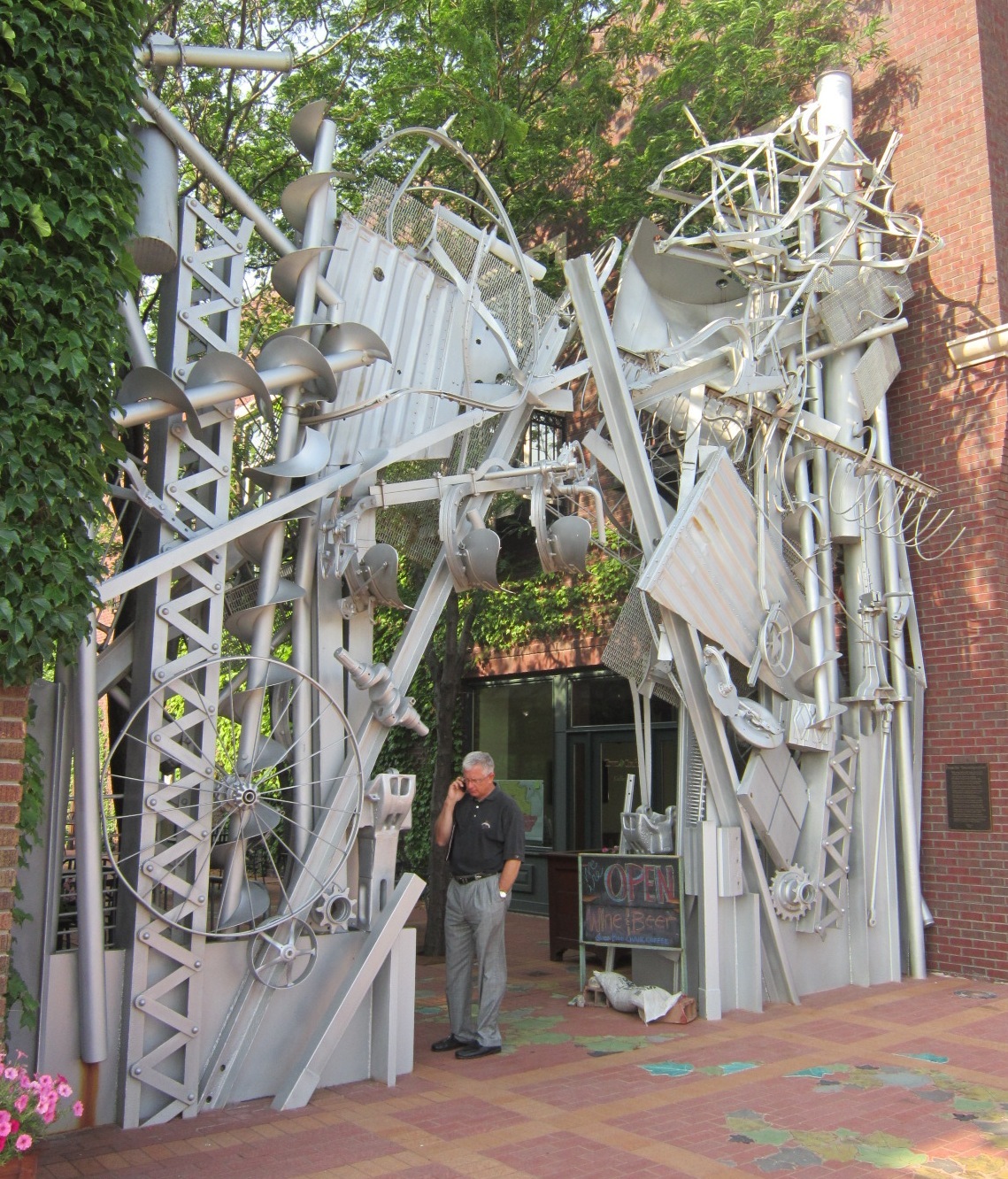 The larger of two “Reconfiguration Arches” by sculptor Albert Paley adjacent to the Hotel Pattee in Perry. 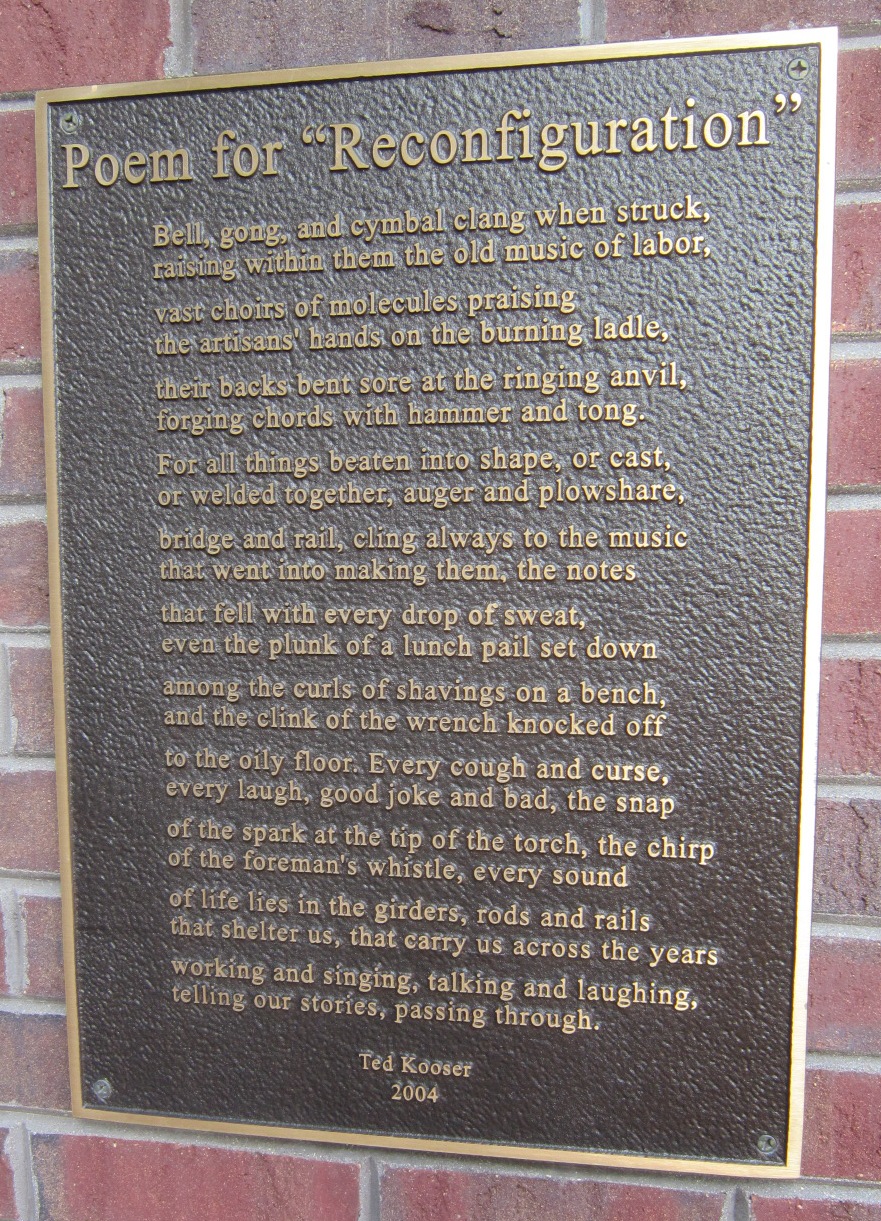 Ted Kooser’s poem, which he wrote and read at the dedication of the arches in 2004 in Perry. The poem is on this bronze plaque which hangs adjacent to the south arch.