WEST DES MOINES, Iowa, July 6, 2016 — When an editor from the New York Times news bureau in Washington, D.C., spends four years interviewing, researching and writing a book on a baseball story in Iowa, you can pretty well figure it’s a story worth telling — and reading.

It’s the story of the late Merl Eberly and his Clarinda A’s summer  baseball program for top college players who are pursuing their dreams of becoming professional baseball players.  Most Iowans know some of the story of the program in Clarinda, a southwest Iowa town of 5,500. Hundreds of college players have spent summers there over the past 40 years, and some have had their baseball dreams come true, some of them Big Time — like Hall of Famer Ozzie Smith, eventual Major League Baseball manager Bud Black, another star player Von Hayes and others.

This 255-page book is a dream come true for Tackett — the first book he’s authored.  “I always thought I’d do a book eventually,” he told me on Tuesday while he was signing books for a steady stream of purchasers at Barnes & Noble bookstore here. “But I thought it’d probably be about politics. That’s what I’ve spent most of my career writing about and as an editor. I’ve always liked baseball, but I never thought I’d be writing a book about it, especially in Clarinda, Iowa.”

I’ve now read “The Baseball Whisperer,” and I’ve been around Clarinda baseball for 55 years.  I told Tackett this feels like a movie to me.  We Iowans think we know something about good baseball stories that make great movies. 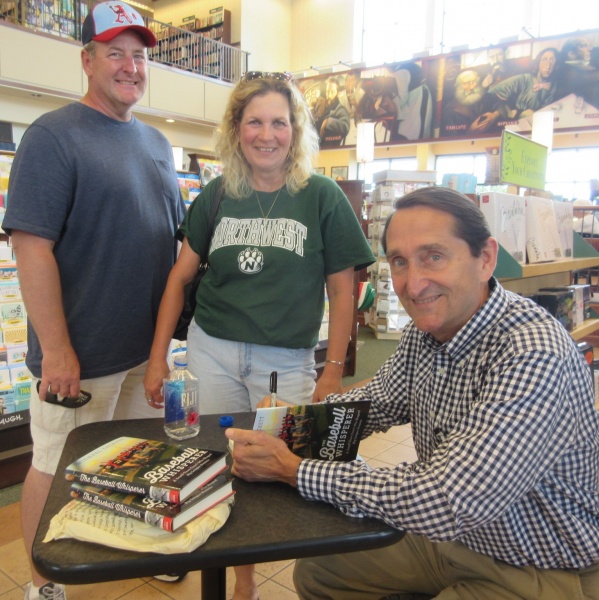 Author Michael Tackett on Tuesday, July 5, signed a copy of the new book about Merl Eberly and the Clarinda A’s baseball program  for Steve and Lori DeBoer, of Ankeny, during an event at the Barnes & Noble bookstore in West Des Moines.  Steve came wearing a Clarinda A’s ball cap.  Lori Shaw DeBoer proudly reported she is a native of Clarinda and the daughter of Milan Shaw, who coached with Eberly.

Tackett is on his way to Clarinda today, where there will be a book signing at the Public Library at suppertime, then on to Eberly Field at Clarinda Municipal Stadium.   Manager Ryan Eberly, son of Merl, will have the A’s baseball team, 18-15 so far this season, playing the Sedalia Bombers in a MINK Collegiate Summer Baseball League game.  (That “MINK” stands for Missouri, Iowa, Nebraska and Kansas, the states that have fielded teams in the league over the years, although this year there are seven Missouri teams and Clarinda, with none from the other two states.)

“I’ll never forget my first trip to Clarinda,” said Tackett, a native of Anderson, Indiana.  “In 2010, my son Lee played for the A’s, and so I made the trip.  I had spent part of my career with the Chicago Tribune, and I was in their St. Louis bureau, so I had plenty of experience with small towns in the Midwest.  When I got to Clarinda, I was surprised at how ‘intact’ it was, still with a vibrant business district, nice amenities.  And then when I got to the ball park, well, you know how that is — perfect!  I mean, depending on the year, there’ll either be a big field of corn or soybeans out beyond the rightfield fence.  A real ‘Field of Dreams’ atmosphere.”

Lee Tackett had a terrific summer in Clarinda, returned to Washington & Lee University to finish his college experience and wound up on the video operations staff of the Los Angeles Dodgers organization.

The family’s relationship with Clarinda, the A’s and the Eberlys was firmly established.  After Merl Eberly’s death from cancer in 2011, his wife Pat Eberly — who was always like a co-partner with her husband in running the ball club and still is with her son — wanted to preserve the story in a book.   Pat asked me about it, and while I didn’t want to do it myself, I gave her some ideas on how the story might be told and recommended a couple of possible authors.  She had conversations with them, but the story could not have landed in better hands than those of Michael Tackett. 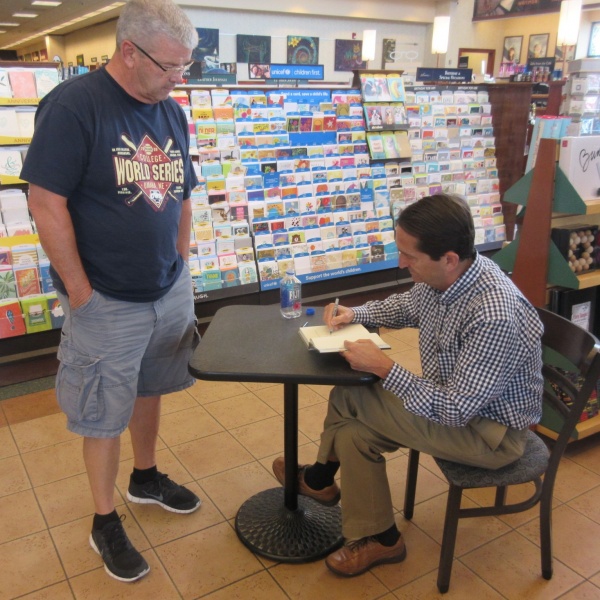 Tackett here signs a book for Dale Sandquist, a native of the Emerson and Shenandoah areas of southwest Iowa who now lives in Waukee.  “One summer I played town team baseball for Elliott,” Sandquist said. “We played the Clarinda A’s, and they had this lefthanded pitcher Scotty Kurtz.  His curve ball was just vicious.  I managed to get one foul tip off of Scotty and I considered it a successful night!”

Tackett made his first reporting trip to Clarinda in early 2012, and returned three or four times after that for interviews and research.   “Of course, a lot of the interviewing wound up being by telephone, since the A’s story involves people who are now spread all over everywhere,” Tackett said. “I talked to some of the people who are still in professional baseball when their teams were coming through Washington, D.C.”

His reporting is exceptional, rich and colorful in its detail; honest in its portrayal of the Eberlys and their players, with all the glory and warts that make the story so wonderful and so remarkable.

“Mike has a great eye for a great story, and few tell stories better,” said Jeff Zeleny, a former Des Moines Register colleague of mine who has become one of the nation’s top political reporters, now for CNN.  “I had the good fortune of working for Mike at the Chicago Tribune from 2000 to 2006. It was Mike’s idea for me to do a year-long series in 2005 of a new Illinois freshman U.S. Senator named Barack Obama. We wrote five in-depth stories on Obama that year, providing a rough draft of his rise. Mike smartly edited it and made it what it was. One of the best editors I’ve ever worked for.”

Tackett put together an excerpt of the book for a story in this past Sunday’s New York Times, and you can read that by clicking here.  I was glad to see he included in that what I think is the best line in the whole book.  That is the description by Von Hayes, who went on to a great career in the major leagues, most notably with the Philadelphia Phillies, of what his mentor Merl Eberly was really like.

“If  you looked up ‘country boy’ in the dictionary, that’s the kind of man you would see,” Hayes said of Eberly. “He was a big, tall, strapping, strong, stern individual, kind of like a cross between John Wayne and Andy Griffith.”

That certainly pegs the Eberly I knew.  Our friendship started in 1961.  That’s when as a pimple-faced eighth grader in the nearby rival town of Shenandoah, I became the boy sportswriter for The Evening Sentinel.  Eberly was a sportswriter and ad salesman for the Clarinda Herald-Journal.  I was 13; he was 26. We got to know each other through my coverage of the Shenandoah Mustangs and his coverage of the Clarinda Cardinals.  I quickly realized he was also the outstanding catcher for the Clarinda A’s, going back to their first game as a “town team” in 1955.

In fact, that same summer of 1961 when I first met Eberly, he had just taken over as manager of the A’s. He continued as manager thru the 1997 season, compiling a record of 1,501-591, as Tackett reports in the book. 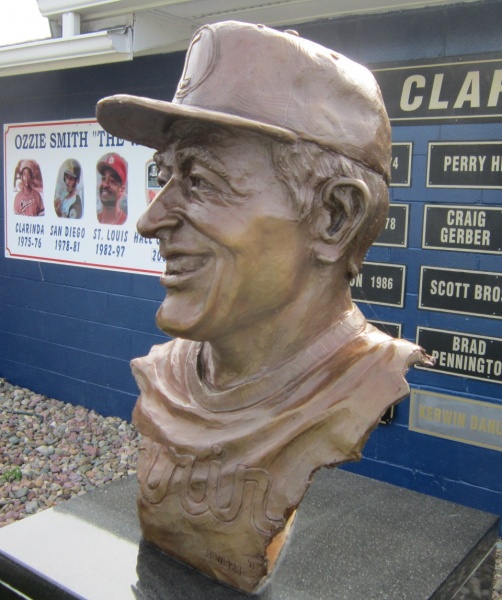 The bronze sculpture of Merl Eberly outside Eberly Field at Clarinda Municipal Stadium in the southwest Iowa town.

Shenandoah had gone several years without having a town baseball team by the time I graduated from high school in 1965.  Several of us who had played baseball together since elementary school came home in May 1966 after our first year of college, and we played for the ragtag town team in nearby Imogene.  By the summer of 1967, we started a new town team in Shenandoah, the Stallions, made up by men ranging in age from 18 to 58, if I remember correctly.  We had a good run of three or four years before we all moved on to other things in life.

In those three or four years, we probably played the Clarinda A’s 8 or 10 times.  The A’s then were still operating as a “town team” with a mix of young adult players from around the area as well as a few college players who had personal roots in the area.

My high school classmate and teammate Denny Howard, now the longtime operator of a sporting goods and clothing store in Shenandoah, said Tuesday that Eberly’s A’s back then “were always so well grounded in the fundamentals of the game, and didn’t beat themselves.  I was thrilled when the Stallions beat them 6-0 one night at Clarinda.  I think that was the only time we ever beat them.”

I remember several nights when we flat could not get Eberly himself out.  He batted left-handed, and he’d hit balls halfway to New Market.  One game in Shenandoah, where we had a rather short leftfield fence, he came to bat with a runner or two on base.  By then I was not only the Stallions catcher but also the manager, so I signaled to our pitcher and team that we would give Eberly an intentional walk.  Alas, our pitcher floated one too close to the outside corner of home plate.  Eberly stretched, took a mighty swing and poked the ball out of the ol’ ballpark.

By the mid 1970s, Merl and Pat Eberly and the Clarinda A’s board of directors were transitioning the ball club into being more of a college all-stars operation.  Nobody — not players, the Eberlys or board members — has ever been paid for their involvement with the A’s.  It’s been increasingly difficult as the years have gone by for the Eberlys and the board to raise enough money to keep the program operating.  But with generous donations from many of the players who are A’s alumni — including those who’ve had lucrative careers in the major leagues — the games continue on Eberly Field.

As you approach that hallowed spot, just off the diamond you see the terrific bronze bust of Merl Eberly. It is a wonderful likeness of him, and an even better tribute to him. In January 2012, at the annual A’s fundraising banquet, Ozzie Smith came from St. Louis, where he played and still lives, with a big surprise. He unveiled the bronze of Eberly, which Smith had commissioned noted sculptor Harry Webber to do.  Webber has done statues of St. Louis Cardinal greats that you can see outside Busch Stadium in that city, one of those being of Smith himself.

But thanks to author Michael Tackett, we now know of an even greater tribute by Ozzie Smith to Merl Eberly.  Deep in “The Baseball Whisperer,” Tackett takes us to Eberly’s death bed in June 2011, when Merl was “in and out of consciousness and not really able to hold a conversation for days.”  Smith made a hurried driving trip from St. Louis, arrived in Clarinda just in time, went directly to the Eberly home, hugged and consoled Pat, and climbed the stairs to the bedroom.  Here’s Tackett’s description of what happened:

“The old coach looked up at his most famous player and managed a broad smile. ‘Hey, Oz, good to see you,’ Merl said.  It was one of the last conscious moments of Merl’s life.”

You’re going to love this book as much as I do. 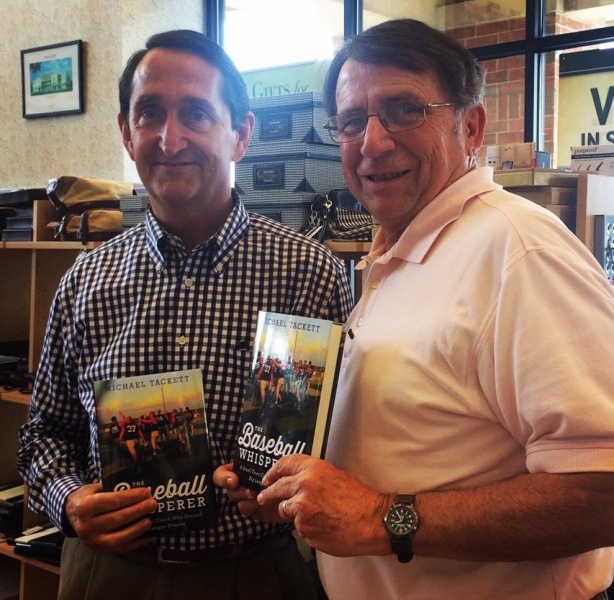 Author Michael Tackett and columnist Chuck Offenburger, both admirers of the Eberly family and the Clarinda A’s baseball program, at Tackett’s book signing event at the Barnes & Noble bookstore in West Des Moines.