COOPER, Iowa, Dec. 21, 2015 – Terry Rich, the most famous native son of our tiny town, has always had a story. Now he’s put the best of them together in a fun-reading, motivational book that has lots of lessons from his colorful career in communications, business and organizational management.

His “Dare to dream, Dare to act: Unlock your ideas to greater success,” is available now in soft-cover for $14.95 retail on Amazon, Kindle and at The Printer’s Box gift shop on the courthouse square in Jefferson.

Rich, who is now headquartered in the Des Moines area as CEO of the Iowa Lottery, is in demand as a public speaker across the U.S. He intends to distribute the 97-page book after speeches, a take-away to remind people of whom they were listening to and the points he was making. 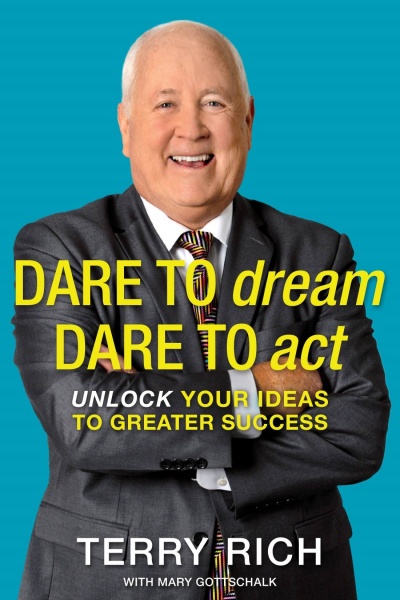 But since Greene Countians and actually all Iowans figure heavily in Rich’s stories, the book is bound to be hot stuff here, too.

Terry came home to launch the book on Dec. 1 at a reception in our stately, 100-year-old county courthouse.

The “Courthouse 100” Committee, which is coordinating the building’s centennial, hosted the reception, and Rich donated the costs and profits from the 49 books sold there, to help start the planning of the celebration. In addition, the “Committee for a Super Cooper,” which is like a community club here in Rich’s hometown, covered the expense of the cookies, coffee and eggnog for the reception, enhancing the courthouse committee’s take from the event.

Rich visited personally with everybody attending, while he was signing books. And he made general remarks, too, giving the crowd glimpses of what’s in the book.

He says his start in show business came in 1958 when he was 5 years old and accompanied his parents as they chaperoned a teen dance at the old high school in Cooper. While early rock ’n’ roll records were spinning on a phonograph, someone lifted the little Rich kid to the stage. He grabbed the microphone and lip-synced Elvis Presley’s “Hound Dog” while gyrating across the stage. “Local farmers, friends, and my family thronged around my feet and cheered me on,” he recalls in the book. “I loved every second of it. Only years later did I realize that I had been in the throes of an adrenalin rush.”

He had a good experience at Jefferson High School, playing in the legendary JHS jazz bands directed by Jack Oatts, serving as senior class president, also county president of the 4H organization, and doing proper penance after he “flipped a bird” in a yearbook photo. He graduated in 1970 and headed to Iowa State University, where he stayed on a roll – being elected president of the freshman class.

That was an era of student activism, and Rich not only was involved in student government, but also in local and state Democratic Party politics.

In fact, he was elected an alternate delegate to the 1972 Democratic National Convention in Miami, supporting former Vice-President Hubert Humphrey in his run for the presidency. He even had a one-on-one session with Humphrey, who was asking him how they could counter eventual nominee George McGovern’s appeal to young voters.

By then, Rich was already at ease in front of crowds. Thus, he was happy to say yes when his parents Bud and Betta Rich asked if he would deliver the message the Sunday after Christmas, 1972, at the United Methodist Church in Cooper. The pastor was going to be away.

“That Sunday in Cooper, I intended to bring national politics to rural Iowa, to shake-up a farm community with predominantly conservative social beliefs,” he writes. He wore “a long, hippie-looking wig” and spoke about how he’d seen the police in Miami beat-up young protesters the summer previously. “I wasn’t prepared for the expressions that settled on the faces of many of the parishioners, including family friends,” he says. “I could almost hear them thinking, ‘Poor Bud. How awful that his son has turned out like that.’ ”

Rich recalls ending his church message this way: “And if you don’t like today’s generation, I guess I could do this!” He yanked off the wig. “Slow chuckles led to knee-slapping laughter, as people decided ‘that ornery kid, Terry’ had been making a joke.” He says that “even today, the old folks remind me of that performance whenever I attend a church service in Cooper.”

Of course, Rich’s most famous Cooper caper was the town’s centennial celebration in 1981, which he masterminded.

He and two other Cooperites, Gerald Lawton and Myrtle Whitcher, wound up in Hollywood, chatting about the town for 17 minutes with Johnny Carson on his globally-televised “Tonight Show.” They were on the show to officially deliver the good news to Carson that he had been selected as the “Honorary 51st Citizen” of Cooper. The whole promotion got so much media coverage that when the actual centennial celebration was held two weeks later, more than 12,500 people came to little Cooper on a sweltering July 11.

The back story on that, which Rich tells in detail in the book, is amazing and hilarious – and it continues even now to have a profoundly positive impact on his career and life. “It all started with a cup of coffee,” he writes in the opening line of the book.

The year before, 1980, the Des Moines Register’s Annual Great Bicycle Ride Across Iowa (RAGBRAI) had passed through Cooper, and the little town went all out. The cyclists were welcomed to town with cannon shots. Rich did a funny audio tape, which continued playing during the day, telling all the business executives on RAGBRAI to “plan your next big event at our Cooper Convention Center,” and other blarney. The visitors loved it, and Register columnist and RAGBRAI co-host Donald Kaul raved about Cooper in his story, which he wrote from the front porch of a Cooper family’s home. Taking note of what a fun success the reception had been, Kaul wrote, “I guess 50 people is enough for a town – if you’ve got the right 50.”

(The population now is 30, we say, but the truth is probably south of that.)

So anyway, it was like Cooper had become hooked on media attention, and Gerald Lawton loved the buzz. Late the next April, in ’81, he called Rich, who was then working with Heritage Communications, marketing and selling cable TV hook-ups, and asked him to come by for coffee. Lawton explained that in that year of 1981, Cooper was turning 100 years old, that there should be a centennial celebration, and he wanted Rich to help plan and promote it.

“You’re the most famous person we’ve had from Cooper,” Lawton told Rich, who was then 28. “You’ve even done TV commercials.”

Rich recalls in the book that his instant reaction was, “Wow! If I’m the most famous person in 100 years, we’d better adopt someone.”

And that was the birth of an idea that made Cooper and Terry Rich famous. He wrote a funny news release, planning to mail it only to the 10 leading media outlets in Des Moines, about Cooper’s contest to pick an “Honorary 51st Citizen,” telling people how to apply, and outlining what the prizes would be – things like a free burial plot here. When he got the letters all addressed to the Des Moines media, he had 34 envelopes left. “OK,” he told himself, as he writes in the book, “let’s have some fun.” He made extra copies of his news release and sent it off to major national media and the wire services.

His first response came just after 9 a.m. the next morning from Bruce Kanner, of the old United Press International, who said he loved the idea and was putting the Cooper story on their national news wire. And then things went nuts.

Thirty minutes later, Jim McCawley, talent coordinator for the “Johnny Carson Tonight Show,” called and said that Carson, an Iowa native, was so intrigued he wanted to be the Cooper honoree. McCawley’s first idea was that they’d do a segment of the “Tonight Show” live from Cooper.  Then he called back and shocked Rich by saying that they were now thinking of  doing a whole show live from the streets of Cooper, with the entire “Tonight Show” cast right here! Alas, that idea proved to be waaaaaay too costly, so plans were scaled back. That’s how Rich, Lawton and Whitcher got their free trips to Hollywood for their appearance on the show with Carson. And that made the Cooper Centennial a huge “happening” that people still talk about. 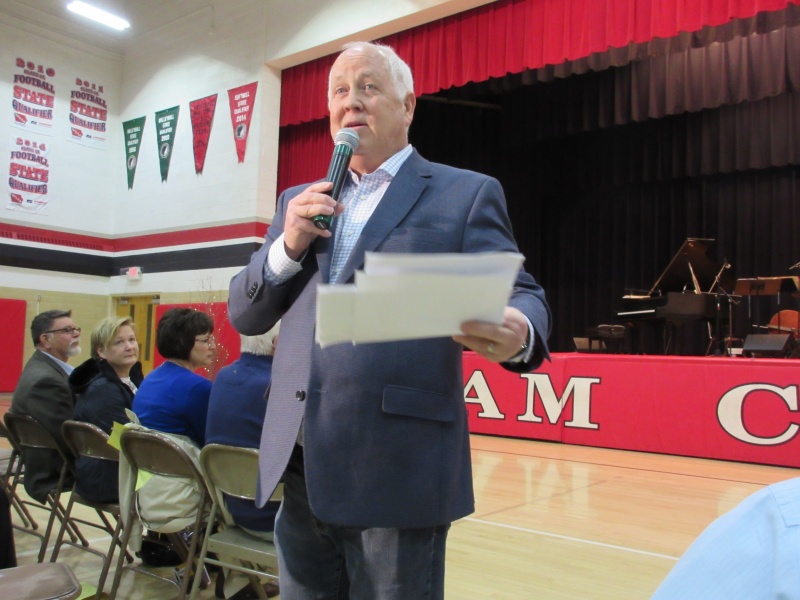 Terry Rich, emceeing a concert in Jefferson last April by the famous Vanguard Jazz Orchestra, which is based in New York City and features several members of Jefferson’s Oatts family.

There were two other benefits from the Cooper Centennial – actually unexpected – that came to Rich.

First, you can imagine how much experience and savvy he gained by dealing with all the media professionals and celebrities who covered the Cooper story. Second, he learned from Carson’s production staff about the then-new satellite TV technology, with its uplinks possible from almost anywhere, and what that could enable for show production, distribution and marketing.

Rich used all that with Heritage Communications to do commercials and promotional shows – which he produced and generally starred in – selling hook-ups for cable TV premium channels like HBO and others. That helped make Heritage an attractive, successful company – it is part of Mediacom today – and it helped Rich get, uh, rich.

He eventually formed his own teleproduction and marketing company, Rich Heritage Inc., and became even more successful. He had arrived as one of the most successful entrepreneurs ever in Iowa. When the “dot.com bust” was beginning to unfold in 2000 and 2001, Rich followed his instincts and got out of the business, probably just in time, and began easing toward an early retirement.

That gave him time and resources to start doing things more for fun, and for the benefit of the public, instead of just for himself, his family and a company. He consented in 2003 to appeals from community leaders in Des Moines that he takeover the Blank Park Zoo, and he led it to a major expansion. In 2009, he was appointed CEO of the Iowa Lottery by Gov. Chet Culver, a Democrat, and is now in his second four-year term in that position, having been re-appointed by Gov. Branstad, a Republican. “Terry Rich is doing a wonderful job for us,” Branstad said last week.

In the book, Rich uses vignette after vignette to trace his story and development. And he identifies in each big step he’s taken the lessons he learned, the failures that happened, and the successes that followed after he’d pick himself up and try again.

At 63, he hopefully has many years ahead of him. It’s going to be fun watching what he does with them.

Terry’s parents Betta and Clarence “Bud” Rich died in 2001 and 2005. One sister Cheryl Sheer lives in Jefferson, another sister Shirley John lives in St.Joseph. Mo. Terry and his wife Kim live in Urbandale, have three adult children, all living in the Des Moines area, and three grandchildren.

If you want to read more about Terry Rich, I recommend a long feature story done on him on Nov. 12, 2015, by Andrew McGinn, editor of the Jefferson Herald. You can go directly to that story by clicking here.

One thought on “Terry Rich dares us all to dream it, then do it, and make it fun, too!”