GRIMES, Iowa, Feb. 2, 2016 — Tony Watson, our great-nephew who is an outstanding relief pitcher for the Pittsburgh Pirates, came home Friday night, Jan. 29, to Dallas Center-Grimes High School, just outside Des Moines, for the formal retirement of his his prep baseball jersey. “I want to thank you all,” he told the crowd that filled the gymnasium for DCG vs. Newton basketball games. “There are many people in this gym tonight who have no idea how much you impacted my life, but you did.”

Tony was an All-Stater in high school, an All-American at the University of Nebraska and a National League All-Star at Pittsburgh.

He is the grandson of my sister Beverly Watson, who lives in neighboring Johnston.  Her late husband, Bob Watson, was the highly-respected baseball coach at Des Moines Hoover High School (where the field is named after him), and we all regard Beverly as kind of a Queen Mother of Baseball.  Recently, Stephen J. Nesbitt, who covers the Pirates for the Pittsburgh Post-Gazette, was asking me about how we Offenburgers produced a baseball talent like Tony

“The Offenburgers are these flaky romantics who have always loved baseball, were lousy at playing it but pretty good at writing about it,” I told him. “Once we got into the Watson family gene pool, then we had a match with physical ability and heart and desire. You put that together and you get Tony Watson.”

You can learn more in the photos and captions below here. 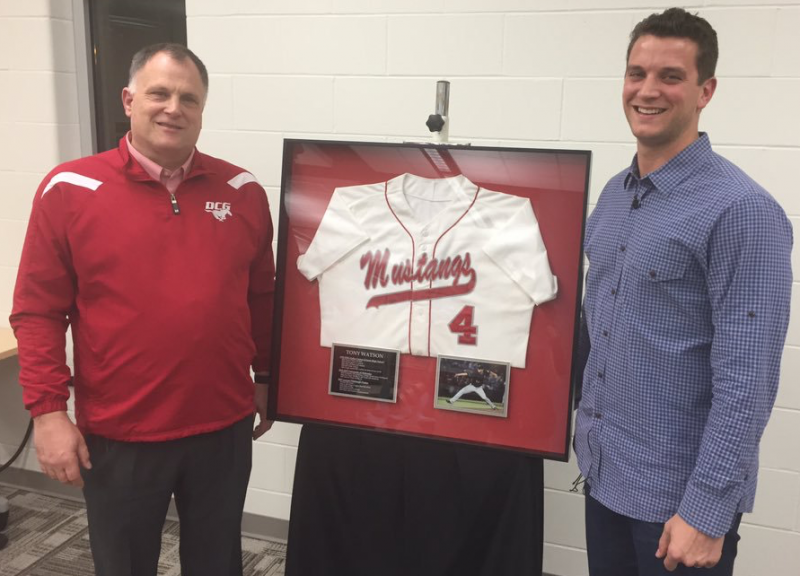 Tony Watson, of the Pittsburgh Pirates, and his father Steve Watson, who is activities director at Dallas Center-Grimes High School, are shown with the framed jersey Tony wore for the Mustangs. 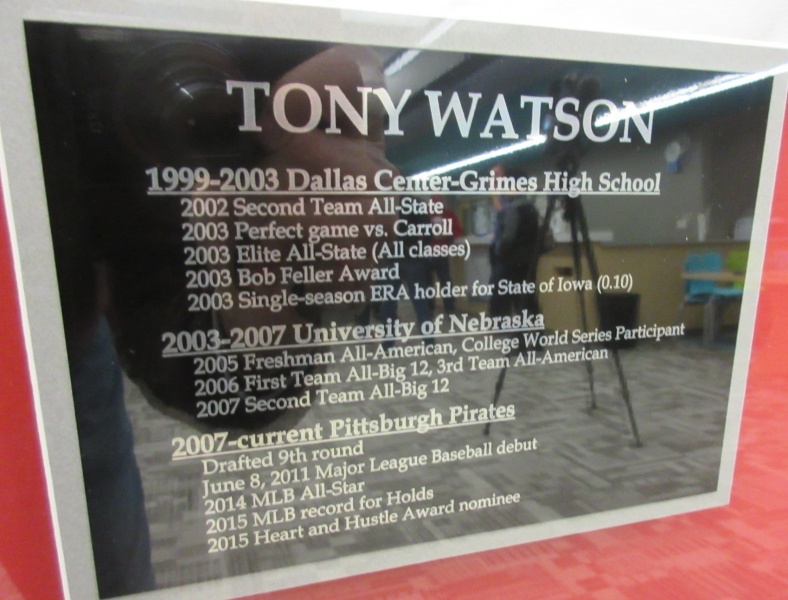 The statistics and honors tell you why his jersey was retired at his high school. 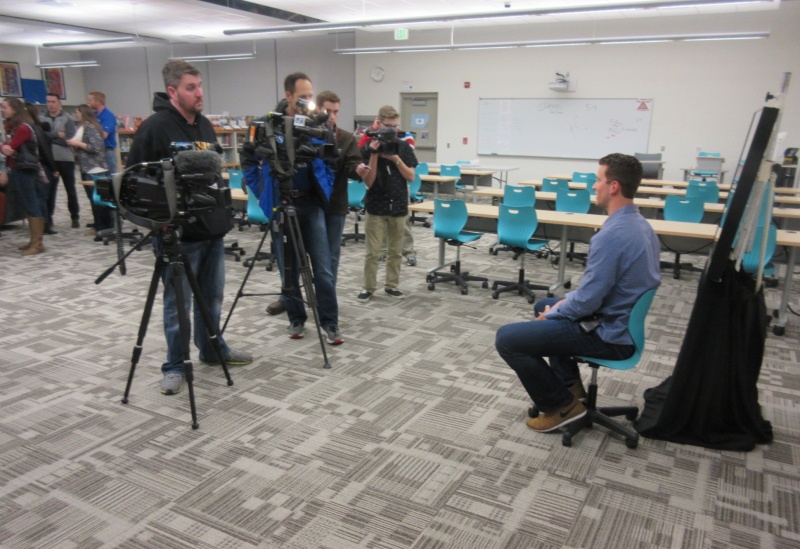 In the extended Offenburger family, we always take care of the media. Here, Tony Watson meets the TV sports reporters before the ceremony at Dallas Center-Grimes. One of them asked him how he feels about being a major league baseball player. “I love it,” he said. “I work hard at it, but it’s a great life. Somehow I’m 30 years old and still getting to play baseball.” And playing it real well, too! 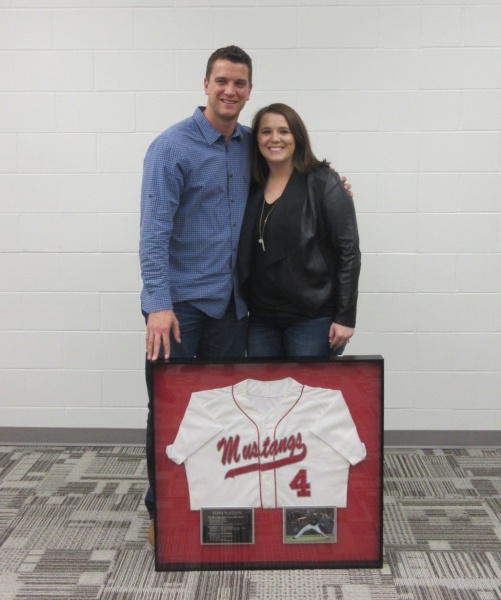 Tony Watson and his sister Ashley Nelson, another DCG High School graduate, with Tony’s framed prep baseball jersey. Ashley now lives in Ames with her husband Ryan Nelson. Tony, his wife Cassie and their daughter Wynnie live in Florida in the winter and of course in Pittsburgh in the summer. Their mother Angie Watson is deceased. Their father Steve Watson and his wife Kim Antisdel Watson, live in Grimes. 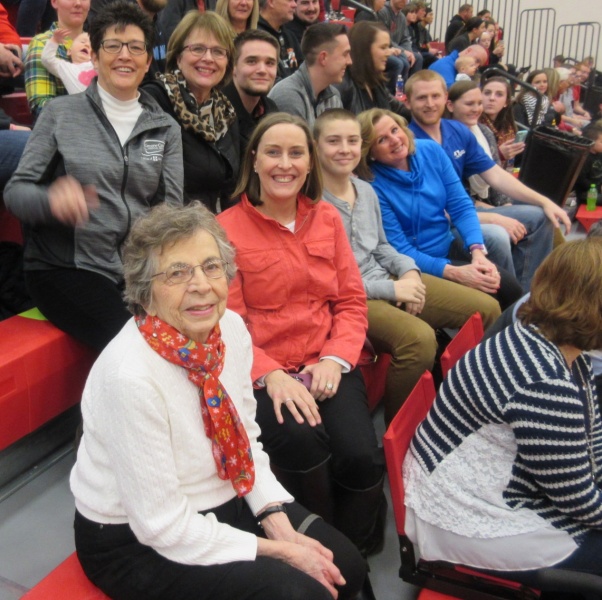 A good turnout from the extended family was in the stands for the ceremony at the Dallas Center-Grimes High School gym.  In front there is Beverly Watson, of Johnston, Tony’s grandmother. 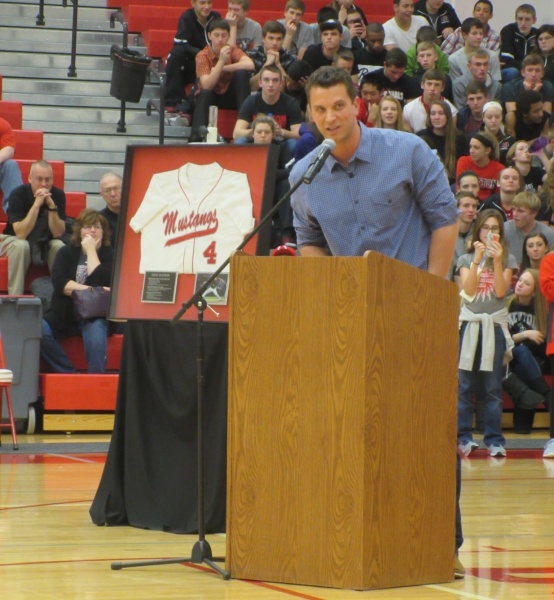 Tony Watson addressing the home fans at Dallas Center-Grimes High School. “When I am running in from the bullpen to the mound to pitch, up on the scoreboard it always says ‘Tony Watson, Grimes, Iowa,’ and that always makes me proud,” he said. 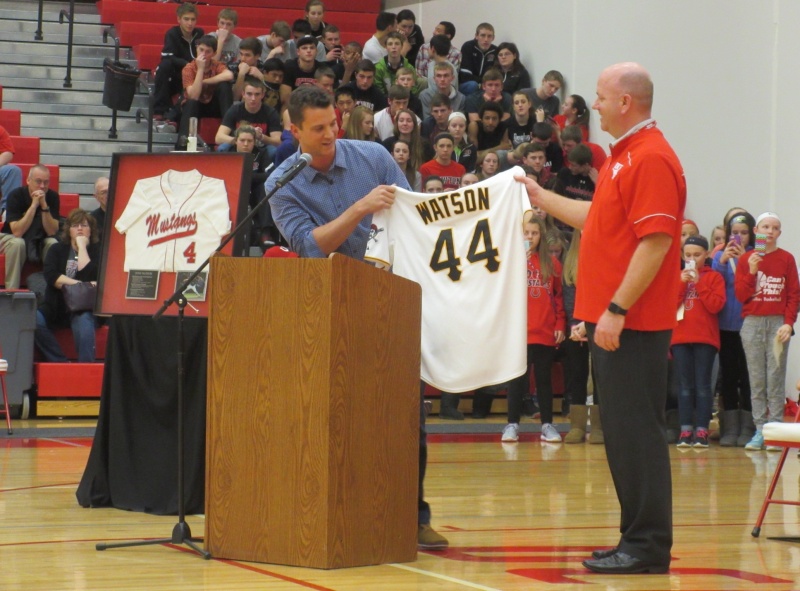 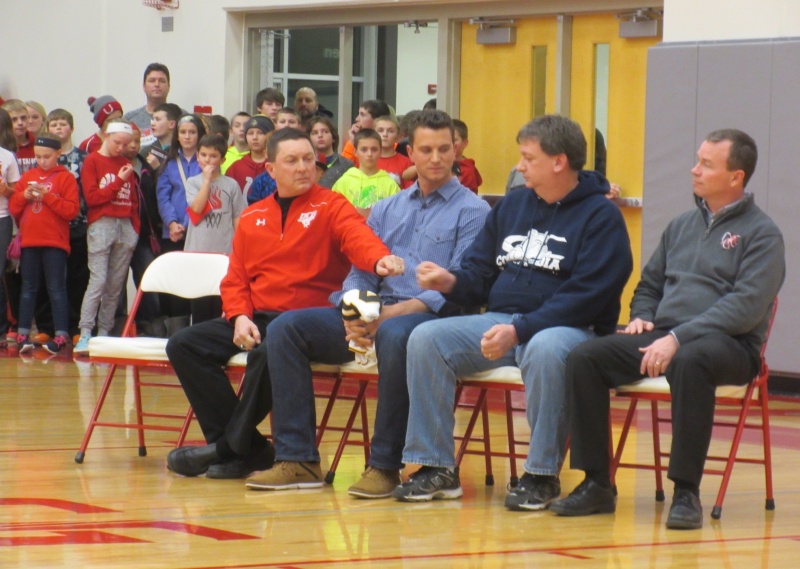 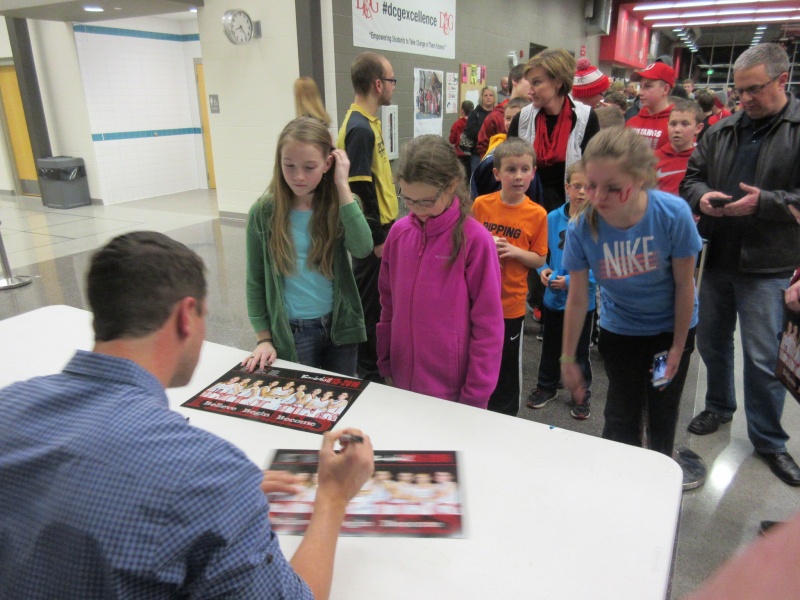 Tony Watson took time for all fans who wanted an autograph, not only signing but carrying on one conversation after another. 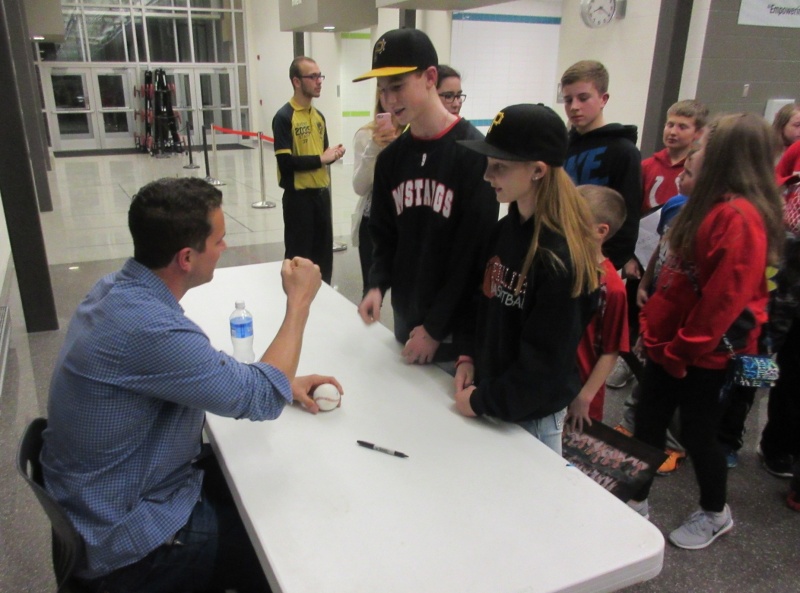 Tony Watson cheers on two of his most avid young fans, Bryce and Elle Jemier, who stepped up in the autograph line at Dallas Center-Grimes High School. Their late father Chris Jermier was a good athlete at DCG, one whom Tony especially looked up to when he was a youngster. 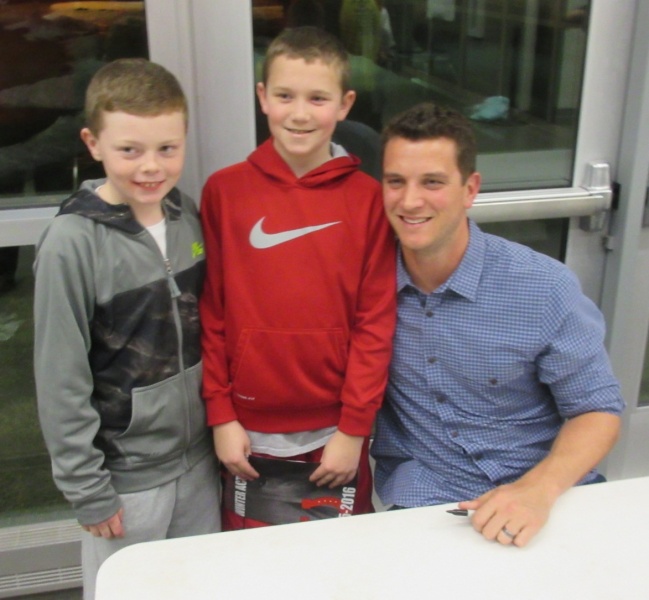 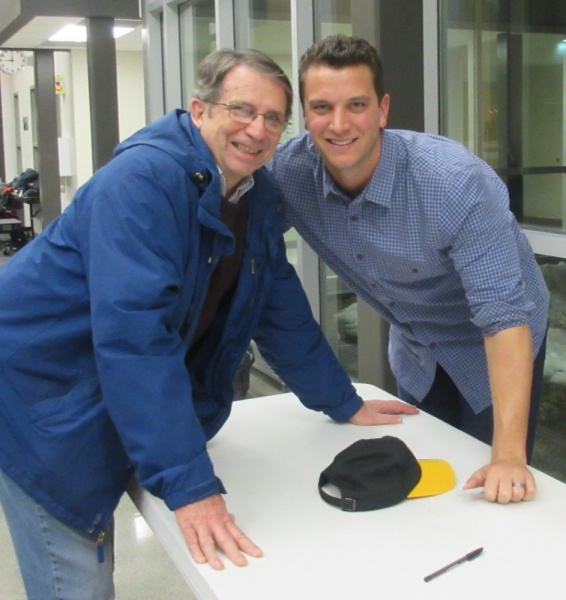 Tony Watson with an old fan, who stood in the autograph line to get the bill of his Pirates cap signed. 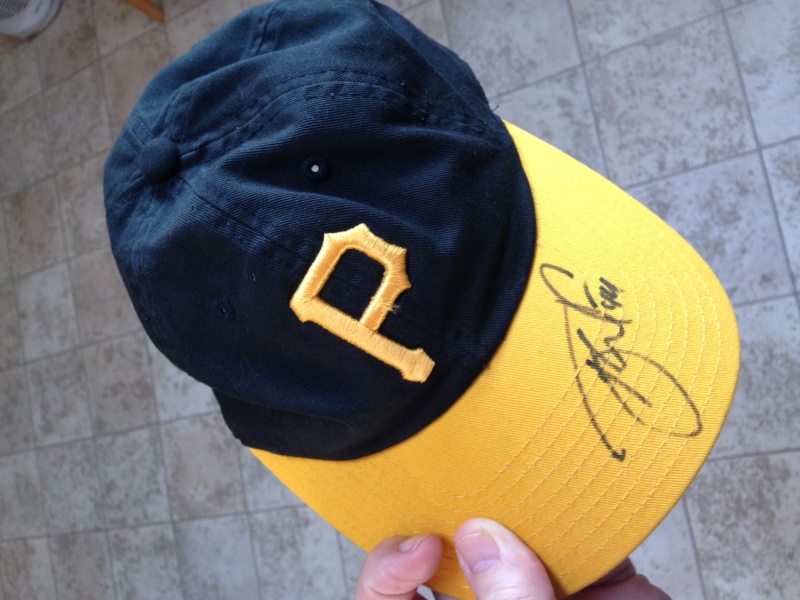 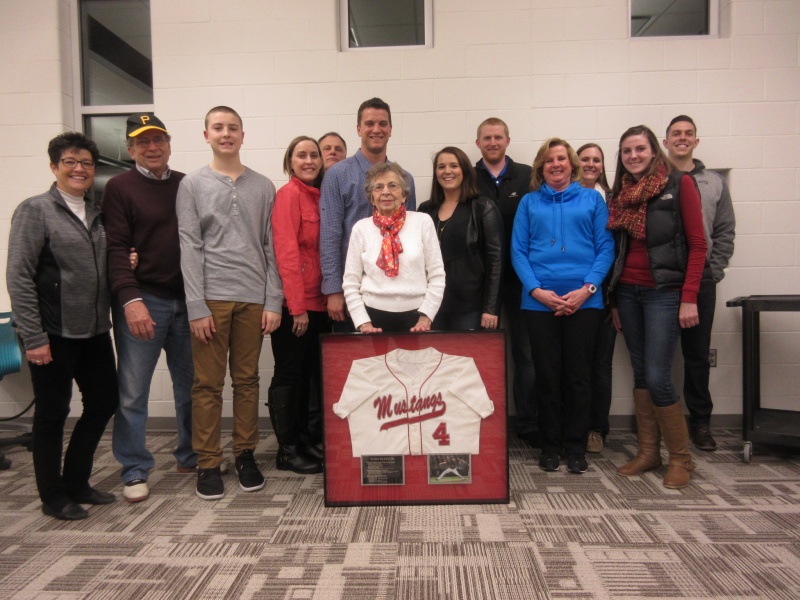 Some of the members of the extended Watson family who gathered to cheer on Tony Watson as his high school jersey was retired at his alma mater, Dallas Center-Grimes High School.