COOPER, Iowa, May 13, 2019 — There is good news to report as the Raccoon River Valley Trail and other recreational trails in our area of west central Iowa get another trail season opened. And the news includes some re-construction plans now being made for the 67 feet of the RRVT bridge that collapsed March 15 when early flooding drove out the ice on the North Raccoon River, just south of Jefferson.  However, there is no estimate yet about when those repairs will be completed.

First, let’s note the opening of a new season.

The RRVT was full of runners Saturday, May 11, when 2,800 runners from across the nation took part in the 7th-annual Market to Market Relay Iowa. That’s a 75-mile-long team race that starts on the courthouse square in Jefferson, use the full length of the south half of our trail, and extends on other metro trails into downtown Des Moines. 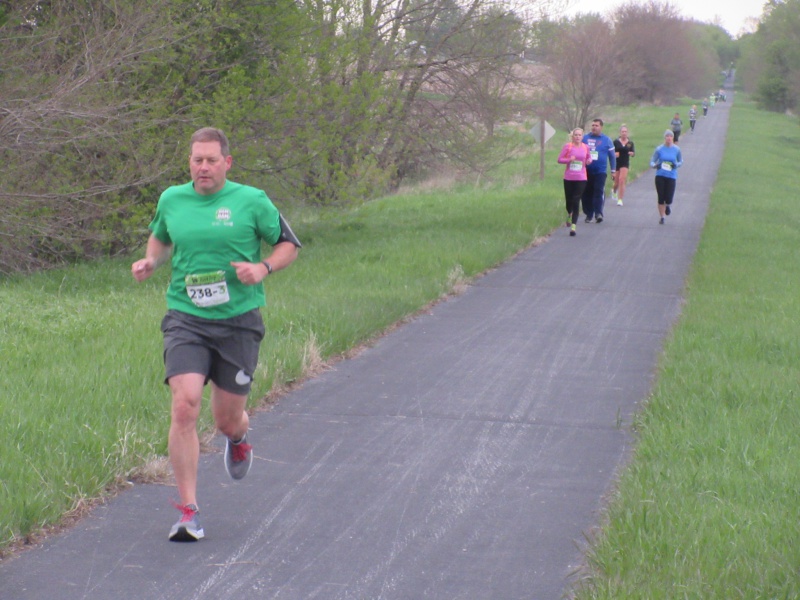 A pack of runners coming south from Cooper on the RRVT in the May 11 Market to Market Relay Iowa.

Also last week, Mike Wallace, director of the Dallas County Conservation Board, announced that 65 percent of the goal of raising $5 million has been met with grants and donations to build the new 9-mile “connector” trail that will extend the High Trestle Trail from Woodward on west into Perry.  There it will connect the HTT and RRVT.  The first 1.5 miles of that trail was built last year from Perry east and is open, and work on another mile or so of it will start later this year from Woodward west.

Wallace also announced that parts of the RRVT and HTT will be included in a new trans-USA trail that was launched last week, the “Great American Rail-Trail.  Being planned and coordinated by Rails-to-Trails, a national nonprofit organization, that trail will stretch 3,700 miles from Washington state to Washington, D.C., crossing Iowa and 11 other states in the northern half of the country. The Great American will be a signed linkage of nearly 125 rail-trails as it crosses the U.S. The portion of the RRVT and HTT included will be from Herndon through Perry, and on to Woodward, Madrid and Slater.  From Slater, it will follow the Heart of Iowa Trail on east.

Another trans-USA trail being developed, also by linking existing trails, already includes the RRVT from Herndon to the Des Moines area.  That is the American Discovery Trail, which is 6,800-plus miles from from Point Reyes National Seashore, California, to Cape Henlopen State Park in Delaware.  It has both a northern route, which includes Iowa, and a southern one. It leads to more than a dozen national parks and a dozen national forests. 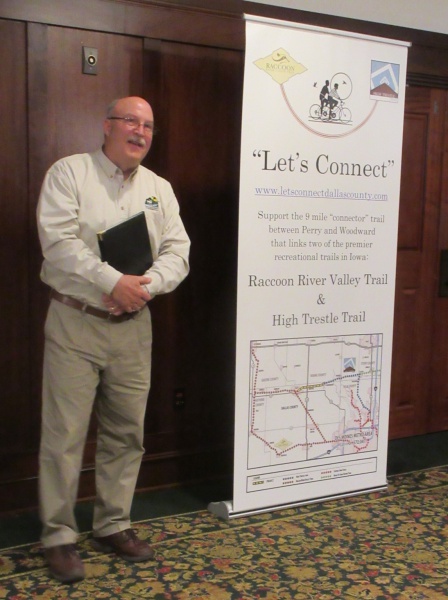 On May 8, a happy Mike Wallace reported significant progress on the “connector” trail — and a new national connection, too!

Upcoming on the RRVT are:

–The 11th annual “Tour The Raccoon” ride is set June 1-2, presented by the Des Moines Cycle Club with an overnight stay in Jefferson.  You can find all the details on BikeIowa.com by clicking here.

–Also on June 2, is a 2019 “Friends Of The Raccoon River Valley Trail” appreciation event at Triangle Park in Dallas Center on the RRVT, with a free hot dog lunch for the first 200 showing their “Friends of the Trail” 2019 passes. You can get more information by clicking here. You can buy your $25 “Friend of the RRVT” pass online right here.

–And the 6th annual BACooN RIDE is set on the interior loop of the RRVT on Satuday, June 15. Still hosted and coodinated by RAGBRAI, the Blue Ribbon Bacon Festival and the Iowa Bicycle Coalition, the BACooN RIDE has now added a new presenting sponsor — the Veridian Credit Union.  Complete information is available by clicking here.

On the repair of the collapsed portion of the historic RRVT bridge over the North Raccoon River, Dan Towers, the Greene County Conservation Board director, said he has now submitted a “request for public assistance” to FEMA, which distributes federal funding after natural disasters.

“We have no idea of time frame,” Towers added. “I’m sure the FEMA staff is swamped with everything on the east and west sides of the state.”

He reports that WHKS Engineering has “come up with a cost estimate and design options.”

“Options are replacing (the bridge as was), or using steel beams to span the entire collapsed length, or some combination of the two,” Towers continued. “The least expensive and most logical would be to span it with steel beams. The length would be 67 feet. This eliminates the need to reconstruct four piers.

“The cost estimate of $245,000 is based on a conceptual design and is subject to change. It also does not include repair of six additional piers north of the collapsed portion, design and construction observation fees. We are guessing this could be another $150,000, bringing the total to $400,000. The engineer looked at the bridge when the river was at flood stage so could find additional issues after it has receded.”

In the meantime, the RRVT is officially closed between the south edge of Jefferson and the Winkleman Switch trailhead. Most trail users are getting around that closure by following gravel roads to Iowa Highway 4, crossing the river on the highway bridge, then returning to the trail via gravel roads. 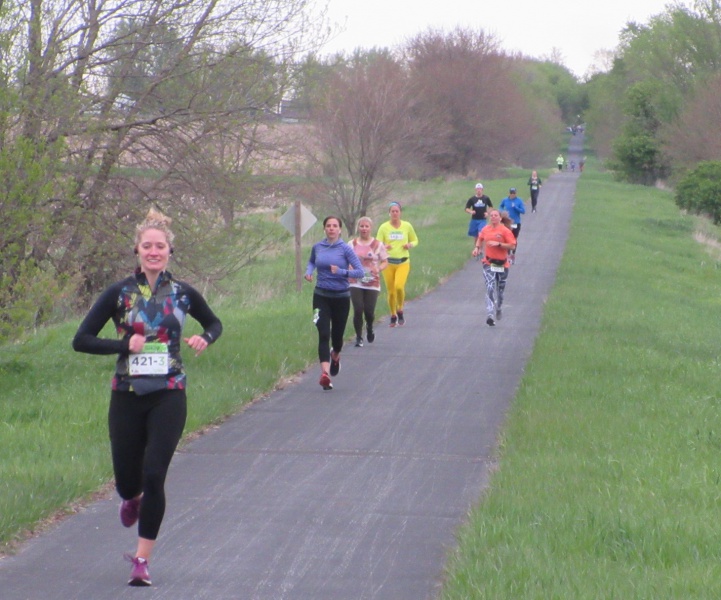 The west central Iowa trails continue to be a major tourism magnet for the whole area with events like the May 11 Market to Market Relay Iowa.

Back to Dallas County, the Conservation Board’s Wallace added that funding for the “connector” between the RRVT and HTT has grown by “over $400,000 since last October.”

Recent grants for that have included $322,208 in a Federal Recreation Trail Grant and $7,500 from the Bock Family Foundaton serving northern Dallas County. Donations in that time include $25,000 from Tyson Fresh Meats, $25,000 from an anonymous donor, $15,000 from Apple (which is building a new complex along the trail west of Waukee), and $14,000 from MidAmerican Energy.

Wallace said one reason that the recent fundraising has been successful is because the story and potential of the RRVT and HTT are “picking up energy nationwide.”