CARROLL, Iowa, April 19, 2019 – After U.S. Senator Cory Booker, of New Jersey, one of the score of Democrats seeking the presidency, had generously spent nearly 90 minutes with local voters here Tuesday afternoon, I had a chance for my own question to him.

Booker, 49, is in his seventh year in the Senate, and the eight previous years, he was mayor of Newark, N.J., which is nearly a neighbor to New York City. Before he was mayor, he served four years on the municipal council in Newark.

“So, most of your political life, you’ve had Donald Trump in New York City close-up in your view,” I said. “You’ve watched him for a long time.” 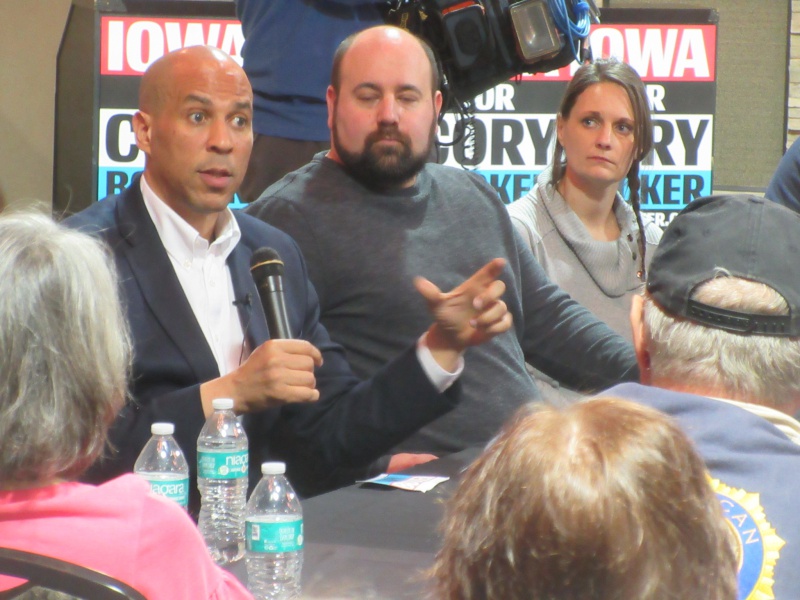 U.S. Senator Cory Booker, a New Jersey Democrat running for president, is shown here talking with a crowd Tuesday afternoon at the Carrollton Inn in Carroll. Seated with Booker are Peter Leo, the chairperson of the Carroll County Democrats, and Lindsay Kastle, one of the county party’s leading volunteers.

“Well, I’ve been around Iowa farmers all my life,” I continued, “and when Donald Trump ran for the presidency in 2016, I was stunned that Iowans in general, and specifically farmers, would even consider Trump, let alone vote for him like they did. Did that surprise you, too?”

Booker said he was as stunned as I was.

“And it looks to me like many Iowa farmers are getting ready to vote for him again,” I said. “So, as someone who has watched Donald Trump operate for a long time, what would your advice be to farmers in this upcoming election?”

The next answer from Booker, who is undeniably an East Coast liberal, surprised me.  It showed me some real political, agricultural and economic sense, the kind I would have expected more from a farm state conservative.

“My advice to farmers is to ‘vote your pocketbooks’,” Booker said without missing a beat. “I tell them, ‘vote for what will let you make some money again.’” 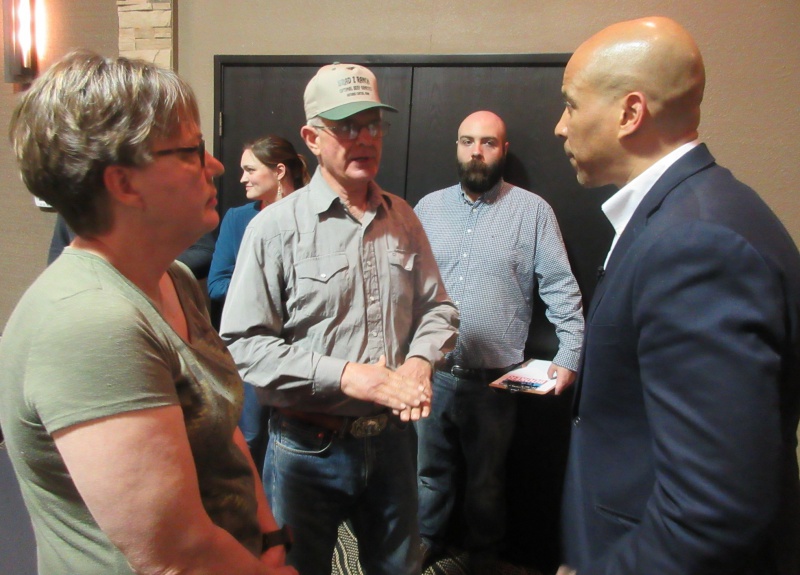 Senator Booker talking after his public meeting with farmers Mari and Leo Schultes, of Coon Rapids.

There have been four or five consecutive years of declining farm income. Booker doesn’t see farmers doing much better by continuing the Trump team in office.

“This is an administration that has no ag policy at all,” he continued. “I think they’ve violated the Packers & Stockyards Act over and over. They’ve encouraged all kinds of consolidation in ag business. And all of that is a threat to the future of independent family farms.

“And look at what their tariffs and trade wars have done to the farm markets.”

Booker would argue that we should not be surprised at such plain talk from him because, as he told the people in Carroll, “my story actually starts in the soil of Iowa.” 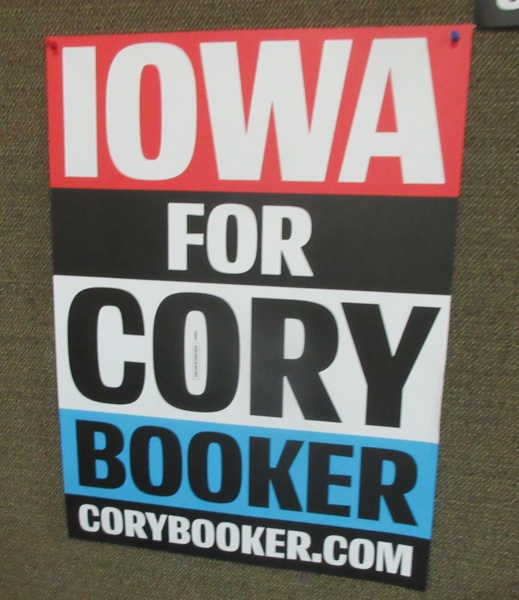 His grandmother was born and raised in Des Moines. Her family had come from Alabama to the town of Buxton in southeast Iowa, drawn by jobs in the coal industry there. Buxton was the town that had a majority population of African Americans, and most others there were first-generation European immigrants.

His own parents started their life together in Virginia, then followed job opportunities with IBM to New Jersey. In Carroll, he shared an inspiring story about how, in the 1960s, white neighbors helped his parents buy a house in a neighborhood – previously segregated – where their son would have access to quality public schools and a better education.

Their struggles and persistence were worth it.

Today, Cory Booker is a compelling candidate for president. He’s already well-known, he’s an outstanding speaker, and he has an impressive background. He was a high school All-American in football in New Jersey, was a standout for Stanford University in California where he earned bachelor and master’s degrees, was a Rhodes Scholar at Oxford University in England, then graduated from law school at Yale University.

In his two terms as mayor of Newark, Booker won a reputation of providing the social services the people needed, and paying for them with savings realized from making the government run smarter and more efficiently.

“I was chief executive of my city when we had a Republican governor,” he said. “We found ways to work well together when we needed to, and I found ways to lead Newark to its greatest economic position in 60 years.”

He said that as a senator, he’s worked well bi-partisanly when it was for good purpose, noting he has co-sponsored legislation with U.S. Senator Chuck Grassley, of Iowa.  And “under President Trump, the only actual piece of legislation he’s gotten passed is criminal justice reform — that I sponsored.” 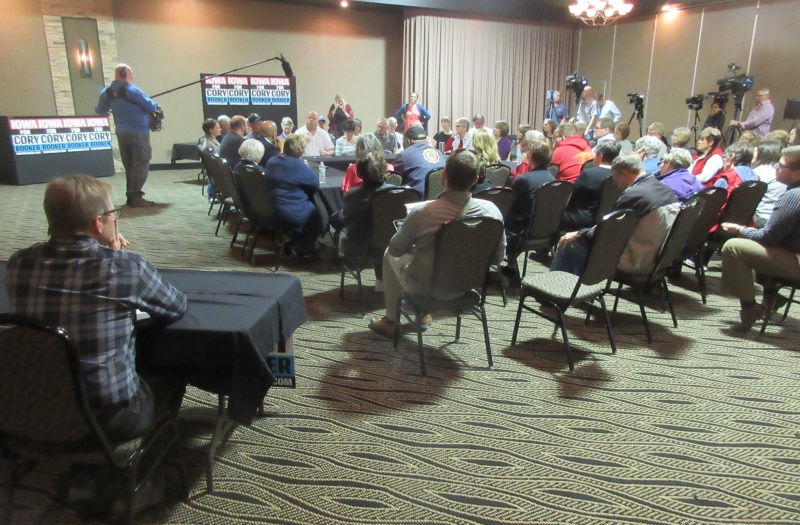 Senator Booker, seated in the middle of the front table, at his public meeting in Carroll, which attracted about 50 people, including a dozen local, state and national media workers. That’s Tony Leys, of the Des Moines Register, in the foreground.

Booker said in answering questions from the crowd that his values now “are defined by faith, family and country.”

He said he’s Baptist, and that while he’s never been married, he is now “in a serious relationship” with an actress “and I hope it’ll become more than that.” He did not name her but media stories have identified her as Rosario Dawson, who lives in New York City.

As for the nation, Booker said “we are in a moral moment in this country, and we must have a recommitment to the (American) dream.”