JEFFERSON, Iowa, Dec. 19, 2015 — There’s a special feeling when you have a Community Christmas Concert, like we did here last Sunday, Dec. 13, and among the featured soloists were Greene County High School seniors David Petersen and Danielle Johnson, both 18 years old, and another soloist was Doyle Carlson, an 83-year-old retired farmer.

The young, the old, all came together in the 4th annual “Nativity Festival,” benefitting the Heart of Iowa Habitat for Humanity organization, which helps re-condition and build homes for folks who need help here in Greene County, as well as in neighboring Boone and Guthrie Counties.  With a display of 60 Nativity scenes from private collections, then the concert, then a soup supper and pie auction, donations are expected to reach $7,600.  The festival is the Habitat group’s only fundraiser during the year.

More than 200 people came and went during the afternoon at the beautiful First United Methodist Church in Jefferson.

I was the coordinator of the concert, and I thought there were several times during the performances when you could genuinely feel the Christmas spirit settling in over our community. 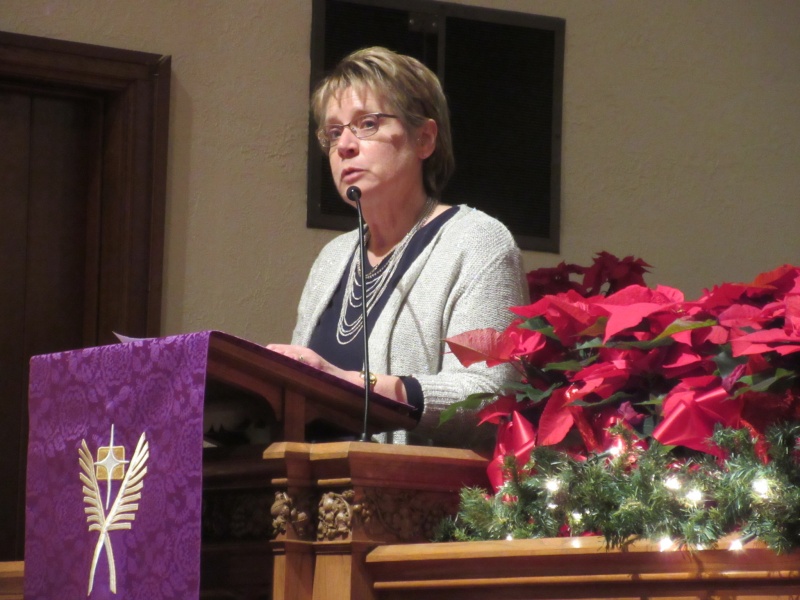 Tori Riley, with her poem.

One of those times was when poet and media colleague Tori Riley read the original poem she had written for the occasion, “Christmas Miniatures,” about just such moments, which can be quiet, or can be powerful but are always profound:

Stars gaze down on a quiet world
crinkled eyes, twinkling light.
As they exhale, hope unfurls
on this holy Christmas night.

Watchful shepherds in lonely fields
hear the choirs of angels on high.
To hymns of joy their doubting yields
under this holy Christmas sky.

The last three years, Riley has given our concerts an unusual touch with her poems.  She somehow finds time to develop and write poetry around her hectic duties as owner and editor-in-chief of the Internet site Greene County News Online.

Her poem this time helped me recognize other special moments — like those from the vocalists I’ve cited here.

Petersen, a 3-time All-State singer, opened the concert by carrying a lighted candle down the center aisle of the sanctuary, which was darkened for his entry, while singing “O Come O Come Emmanuel.” After he did the first verse a cappella, he turned at the altar railing, faced the audience and then did the second verse while accompanied by Keri Brooker on piano.  It was an inspiring few minutes.  As was his return later in the concert when he sang “Ave Maria.”

Johnson has an operatic soprano voice that is as big as the rest of her is petite.  She let it all loose on “O Holy Night,” accompanied by Jenny Wills on piano, and the audience was obviously amazed.

And then came Carlson, the retired farmer who has been singing for more than 80 years!  For “25 or 30 years,” as best he can recall, he has been singing “Sweet Little Jesus Boy” for Christmas Eve services at the United Methodist Church in Paton.  That’s what he did in our community concert, too, accompanied by Danille Curtis.  His performance was flawless, even breathtaking, something I will never forget.

In fact, the whole Nativity Festival was like that.

Maybe it’s because Habitat for Humanity has this wonderful way of drawing together people of all ages, from all walks of life and from all across the political spectrum — all in service to others less fortunate.  Maybe it’s having the prized and artistic Nativity scenes on display   The music certainly helps build the feeling.  So does the fine soup supper.   And how about that auction of 15 of the best pies you’ll see in one place in Greene County all year long? (They average auction price, $157 per pie!)  Put all that together.

It’s the spirit of the season, that’s what it is, and it seems to touch everybody.

You can see more from the Nativity Festival in the photos below here. 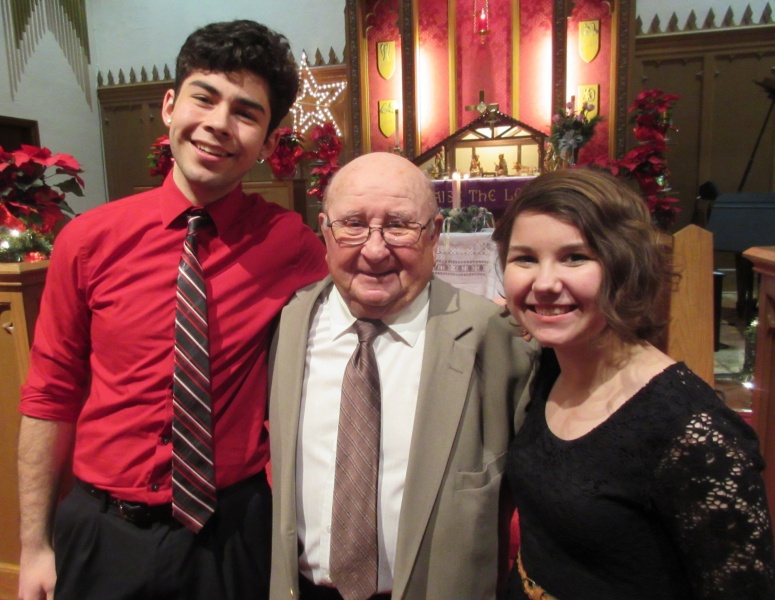 The concert had performers young and old alike.  Spanning the age range of soloists were David Petersen (left), Doyle Carlson and Danielle Johnson.  Petersen and Johnson are Greene County High School seniors, while Carlson is retired from farming near Paton and is now living in Jefferson. 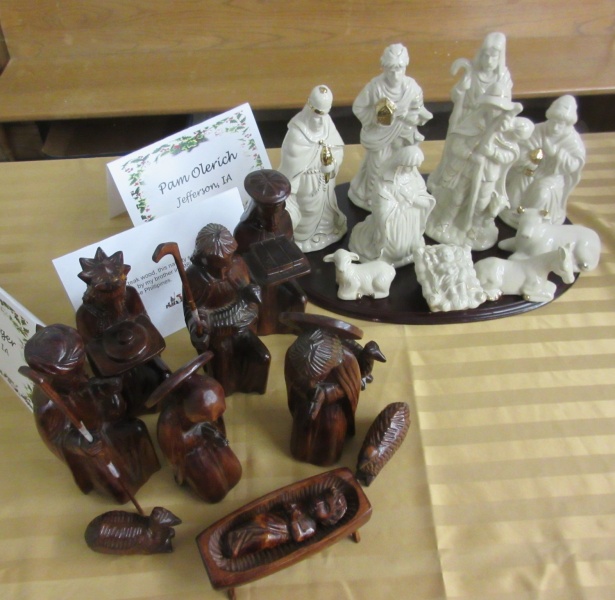 Among the 60 Nativity scenes on display were these two belonging to Pam Olerich, of Jefferson. 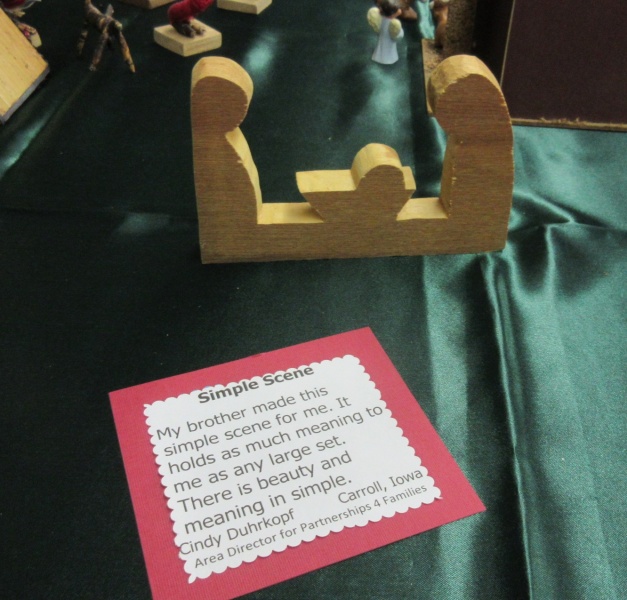 This simple Nativity scene from Cindy Duhrkopf, of Carroll, told a nice story. 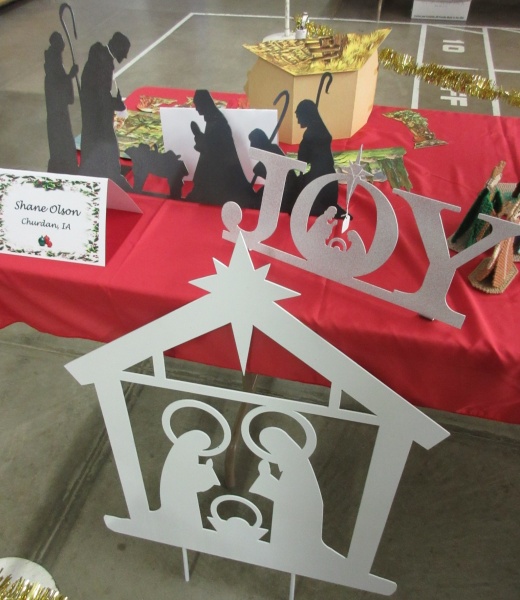 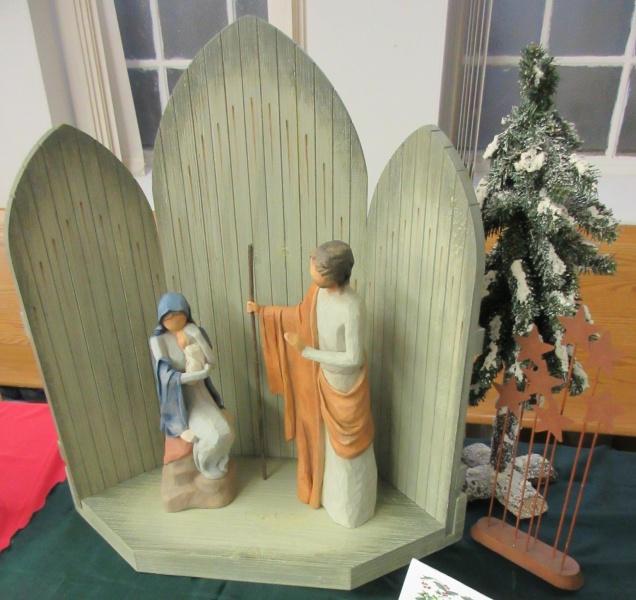 This Nativity scene, from the collection of Jan Scharingson, of Grand Junction, was another of the simple and yet beautiful displays. 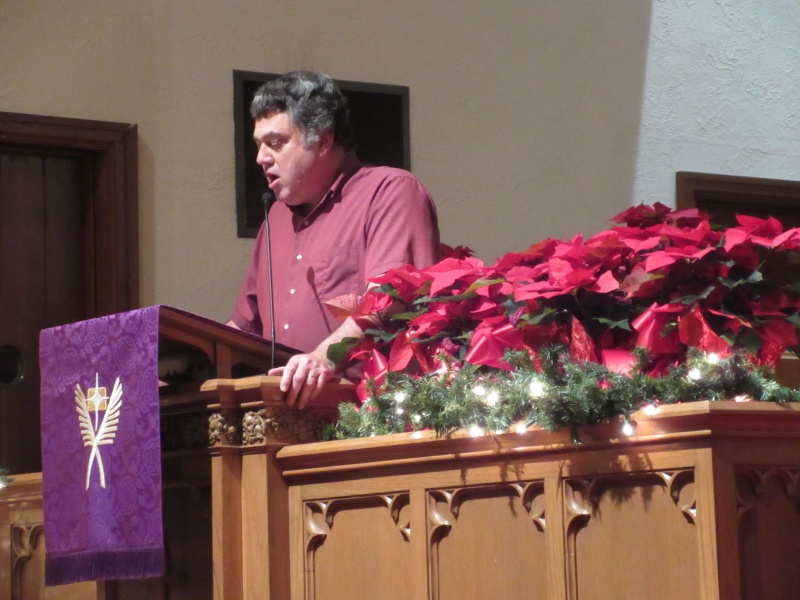 Another of the soloists in the concert was Gary Haupert, well-known singer from Jefferson, who did “The Greatest Story Ever Told,” made famous by the Gaithers. 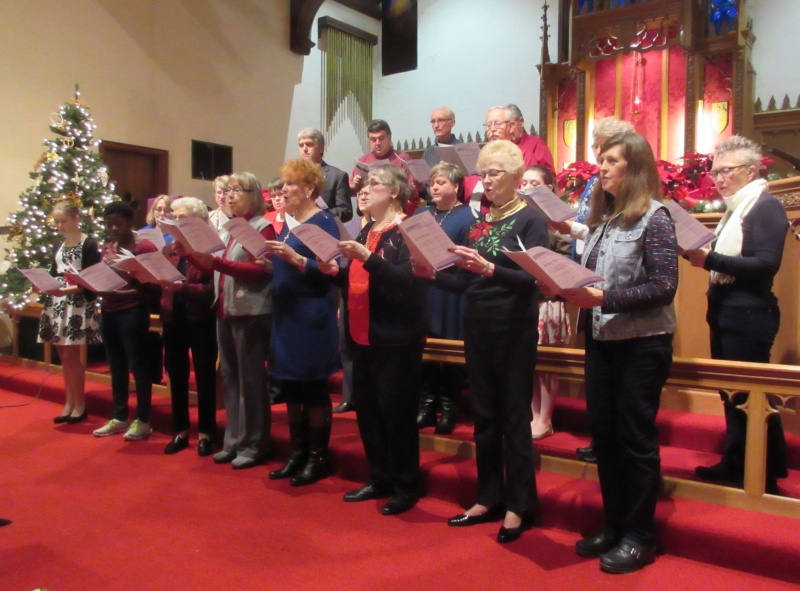 Also performing were the combined choirs of the First United Methodist Church and Central Christian Church, both of Jefferson. 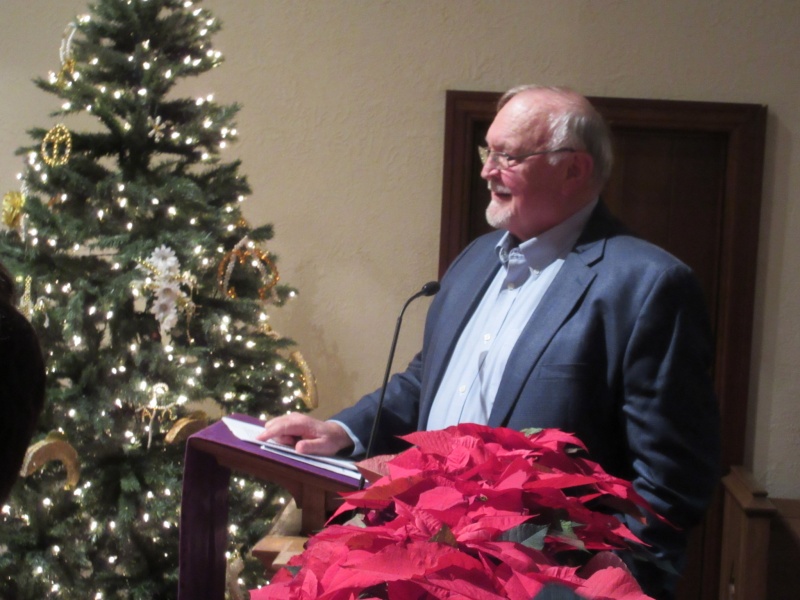 Harry Ahrenholtz, of Jefferson, served as master of ceremonies for the concert.  Ahrenholtz is president of the board of directors of the Heart of Iowa Habitat for Humanity, as well as being a member of the Jefferson City Council. 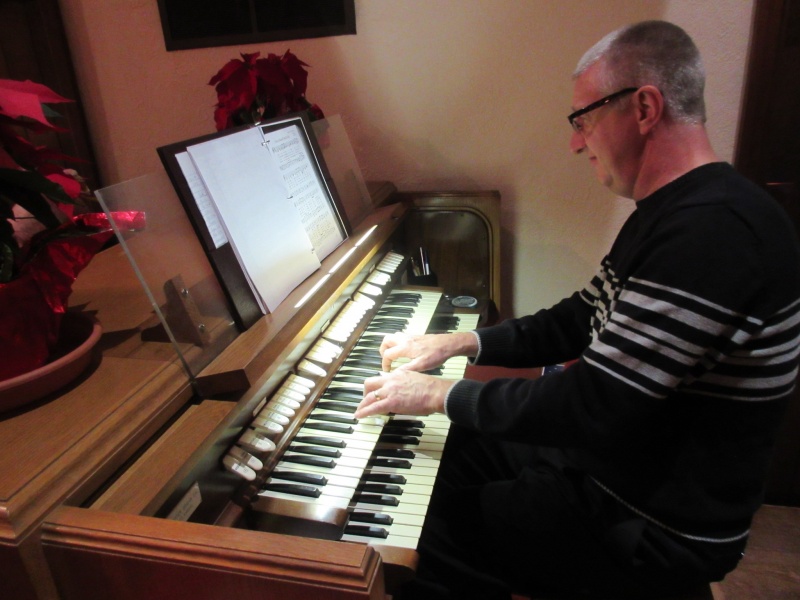 Mark Erickson, organist for Trinity Lutheran Church in Jefferson, played a half-hour of seasonal gathering music as a prelude to the concert. 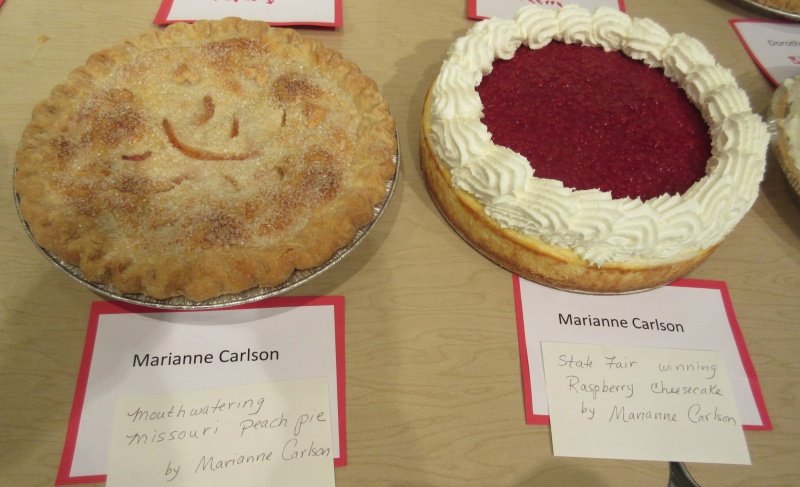 In the pie auction held during the soup supper, following the concert, these two pies by renowned Jefferson baker Marianne Carlson brought a total of more than $500.  On the left is a “Mouthwatering Missouri Peach Pie” and on the right is a “Raspberry Cheesecake.”  That beautiful cheesecake was from the same recipe she used to win a baking contest at the Iowa State Fair. 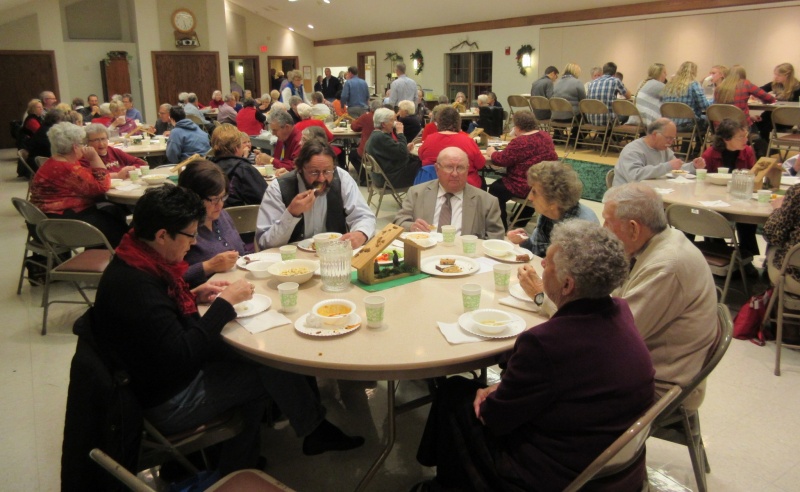 There was a terrific crowd at the soup supper, put together by kitchen wizard Shirley Haupert, of the First United Methodist Church, and a staff of volunteers from other churches, as well as servers from the Interact Club at Greene County High School.