The 56-year-old Dotson, whose permanent American home is in Asheville, N.C., is now associate pastor of the First Baptist Church in Matanzas, a city of 135,000 that is a center for the arts & culture and is located about 60 miles east of Havana.  He’s made more than 40 trips to Cuba since the late 1990s, twice spending a year there, and he views his current hitch as “for the long-term.”

On Sunday, Oct. 7, he is going to give us his inside view of the intriguing island nation when he’s the keynote speaker for a forum “Why Cuba matters to Iowa” at Plymouth Congregational United Church of Christ here. The event is sponsored by Plymouth’s “Cuba Partnership Team,” a group of us who have traveled to Cuba, or want to; who have established a “sister church” relationship with the progressive Ebenezer Baptist in Havana, and now are advocates for improving relations between the U.S. and Cuba.

When a dozen of us went to Cuba in the spring of 2017, Dotson was our tour guide, recommended to us by the people of our sister church.  He impressed us all with his knowledge, interpretation, insights and adventurous spirit.  He put us among real Cubans, in the places where they live, work, worship and play — with only a little time in the famous places most tourists visit.  We learned a ton.

And that’s why we’ve brought him to Des Moines for this forum, which is possible by a grant from the Plymouth Foundation. You can get the full schedule and other details of the event by clicking here — and take note that Dotson speaks at 1:30 p.m. 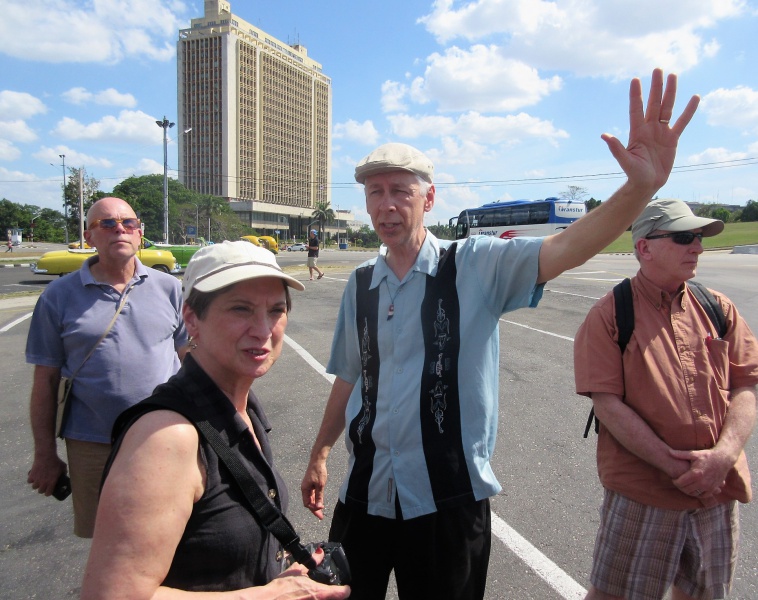 Rev. Stan Dotson, leading a tour of Plymouth Congregational Church of Christ members, in Revolution Square in Havana in the spring of 2017.

“If you really want to understand Cuba,” he says, referring especially to Americans, “you have to let your assumptions be challenged.  And that’s healthy.”

It is a good time to be considering Cuba, the island nation of 11 million people that, geographically, is about the same size as Iowa.  It’s also a good time to reconsider U.S. relations toward Cuba.

As of last April, Cuba has a new president, Miguel Diaz-Canel, 58, much younger than his predecessors the Castro brothers were in their later-decades of service. Diaz-Canel is also not a military man, nor was he around when the revolution happened in 1959.

Another big change — the Cuban constitution, which probably has more impact on daily life for Cubans than the U.S. Constitution does on us, is being given its fourth reformation in the past 25 years.  Among initiatives being considered there — equity for non-traditional marriage, more incentives and less regulation for privately-owned business, accommodating this era’s global communications technology.

Meanwhile, the centerpiece of U.S. policy toward Cuba continues to be the 59-year-old embargo — Cubans refer to it as the “blockade” — that arguably has never been effective and in fact has been counter-productive. The embargo survives because of the political clout of Cuban expatriates in Florida whose families lost businesses in the revolution and have never gotten over it. That is a stand, by the way, not favored by younger Cuban expatriates, most of whom would like to see full normalization of relations, open trade, travel and cultural exchanges between the countries.

“Current policy makes no sense for anybody, except the small number of Cuban expats in Florida who continue to control U.S. government policy that almost nobody else embraces,” Dotson said. 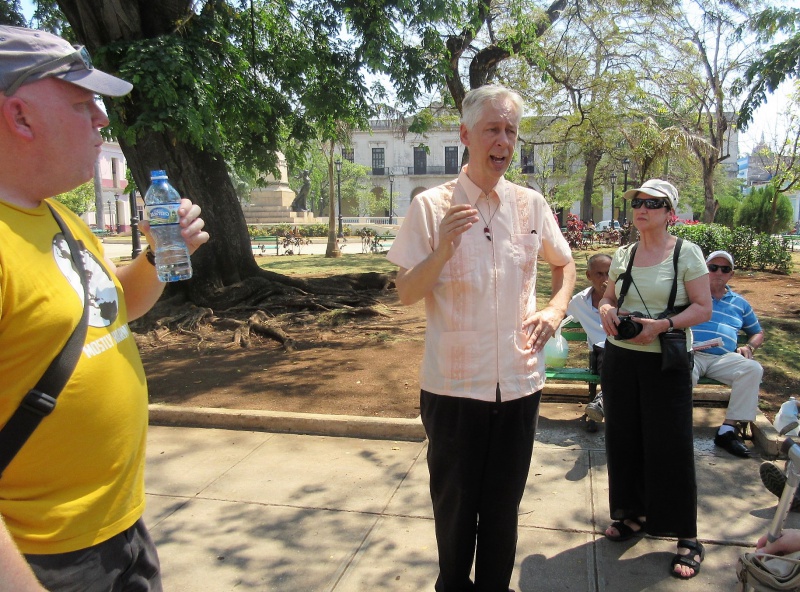 Dotson knows Cuban history and culture and the sometimes quirky places you need to go to experience it.

Most Cubans, though, harbor no grudges for the American people.

“Cubans generally love the U.S. people, even though they don’t agree with U.S. politics and policies,” he continued. “I’ve never seen a more hospitable culture than Cuba’s, even though we’ve treated them as an enemy for 60 years.”

Cubans are very savvy and familiar with American culture, from media influence over the decades and from many now having relatives in the U.S.  But Americans have much to learn about Cuba — after all the forced isolation — and that’s what the Plymouth forum Sunday is all about.

What, in Dotson’s view, are things that especially distinguish Cuba today that most of us here probably don’t realize?

“Well, one is that they’ve figured out how to deal with race relations better than most other places I’ve known about,” Dotson said in a recent interview. “Life in Cuba is integrated at every level. There are no segregated churches, schools, neighborhoods.

“Another thing, they’ve decided they’re not going to have great gaps between the rich and poor. Everybody’s basically in the same boat.  Yes, it’s a pretty flat economy — people don’t have extra money — but everybody in the system has access to excellent healthcare and excellent education, and it’s basically free, right up through college and professional schools. That has worked so well for the people. They are so well educated, you can have intelligent conversations. In fact, they’re very conversational.  They haven’t been as exposed yet to the small screens (of computers and cell phones), so people still know how to talk to each other.”

And it’s fun.  “The whole culture is fun,” he said.  “Cubans are funny, loud, very musical and fun to be around.” 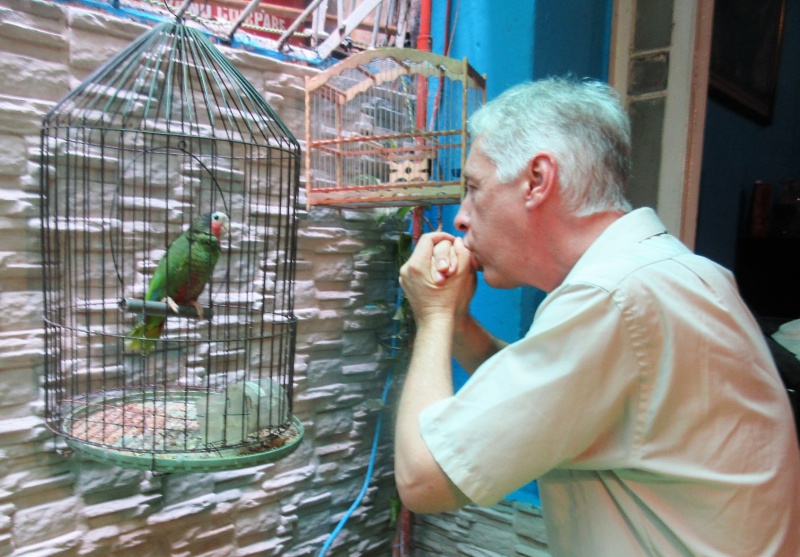 When Dotson is guiding groups on tours in Cuba, he engages everybody — and the birds and animals, too.  Here he’s whistling along with a parrot in a Havana restaurant.

He says Cuban people were like most Americans in late 2014 when it was announced by Presidents Barack Obama and Raul Castro that, after being lobbied by Pope Francis, they were going to start the process of ending the decades of hostilities  and begin normalizing relations between the countries.

“People had a real sense that something historic was happening,” Dotson said. “But at the same time, most Cubans were guarded, because they knew that no matter what changes the American administration was proposing, they didn’t have much hope of big changes from the U.S. Congress.  And they had little belief that there was going to be a huge change in the daily life of Cuba’s people.”

When the Trump administration in late spring of 2017 shut down the move toward normalization, the reaction of most Cubans was “yeah, business as usual,” he said.

Interestingly, many Cubans had expressed some optimism about what the Trump presidency might mean for their country. “You’ve got to remember, that for decades, it hasn’t mattered much to Cubans who the American president is — one’s been about as bad as the next toward their country,” he said. “Yes, they were excited about Obama for a time, but there were many who thought that Trump — because they know he’s a builder — might help development in Cuba.”

They do know and appreciate that many Americans, businesses and organizations are working to improve relations with Cuba, he said.

The Cuban involvement of Dotson and his wife, Kim Christman, who is an actress and teacher of theatrical arts, started in the 1990s when both were pastors in the Baptist tradition.  They were co-pastoring a small Baptist church in Stoneville, N.C., and became active in the Baptist Peace Fellowship of North America, which was focusing on peace and justice issues.  Kim first went to Cuba in 1992 to attend the ordination of three women ministers, the first females to be ordained in the Cuban Fraternity of Baptist Churches.

Later, when Dotson was teaching and working in the administration at Mars Hill College, the North Carolina school that is also his alma mater, he led a group of students to Cuba.

“I have to confess, at first I was like most people when they first go to Cuba,” he said. “I was woefully ignorant of its history and culture. But I’ve always had a healthy curiosity from watching the news and reading books.  That’s given me a lifelong passion for history, culture and music.” 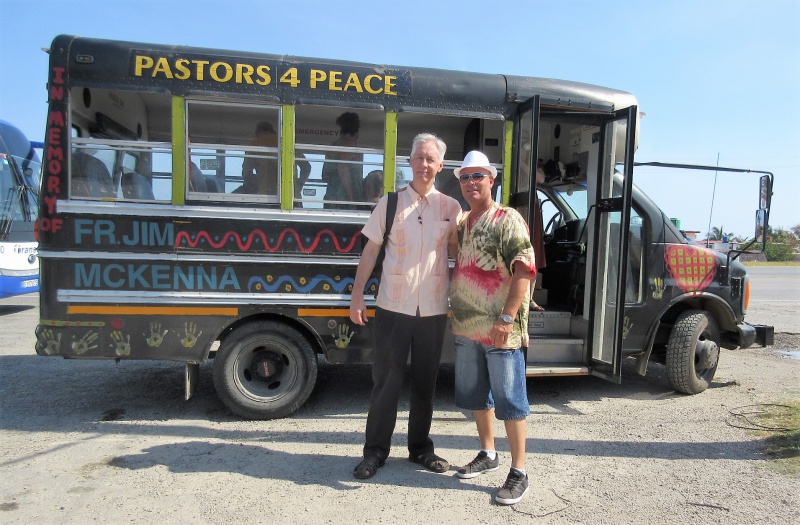 Dotson with Cuban driver Sixto Espino, with one of the old “Pastors for Peace” school buses they used to show us the country.

He and Kim learned Spanish, threw themselves into daily life in Cuba, and asked their new Cuban friends to educate them.

They’re now in the enviable position of being among the few people that are widely known, respected and trusted by Cubans and Americans alike. They’ve helped set-up sister church relationships between a number of churches in Cuba and the U.S.  Stan accepted the call to be associate pastor at First Baptist in Matanzas in the past year.  He and Kim live in an apartment in a church-operated social action center next door to the church in downtown Matanzas.

They blog (most often on Facebook, where you can search for them by name).  And in 2016, Dotson authored a book, “Cuba: A Day in the Life,” which is an excellent, 215-page introduction to the country — not a travel guide, certainly, but a book with strong insights into Cuban history and culture.

Need to freshen up on your general history of Cuba. After visiting that nation in the spring of 2017, Chuck Offenburger wrote a concise reflection on Cuba’s history that you can read by clicking here.